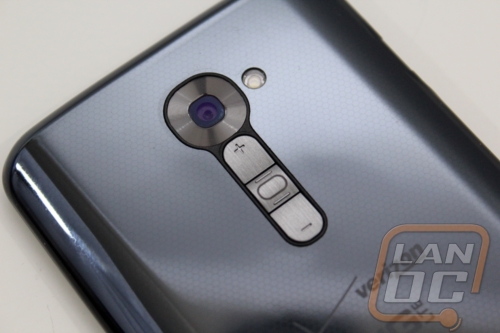 From the front, the LG G2 doesn’t really stand out from all of the other 5 inch screened phones on the market currently. It’s not really their fault though; the goal anymore is to pack the largest screen possible into the phone with the smallest bezel. With Android integrating the three control buttons into the screen, the main areas that phones can stand out from each other are materials (like the HTC One), shape (iPhones), and the back of the phone. The back of the phone is where most things are going on with the G2, but we will get into that further down. On the front though, you have the LG logo down on the bottom under the screen and the Verizon Wireless logo up in the top right corner. Up top you have the 2.1 MP front facing camera over on the left, a notification LED, then the mesh ear speaker. There is also a proximity sensor in between the LED and the front facing camera, but without looking extremely close you will never notice it. The 5.2 inch full 1080p IPS screen hardly seems to fit behind the front glass with the screen running all the way to the far edges of the sides of the phone. The front glass itself is gorilla glass 2 and much like the Nexus 4 that I loved so much, they included a nice rounded edge all the way around the glass. 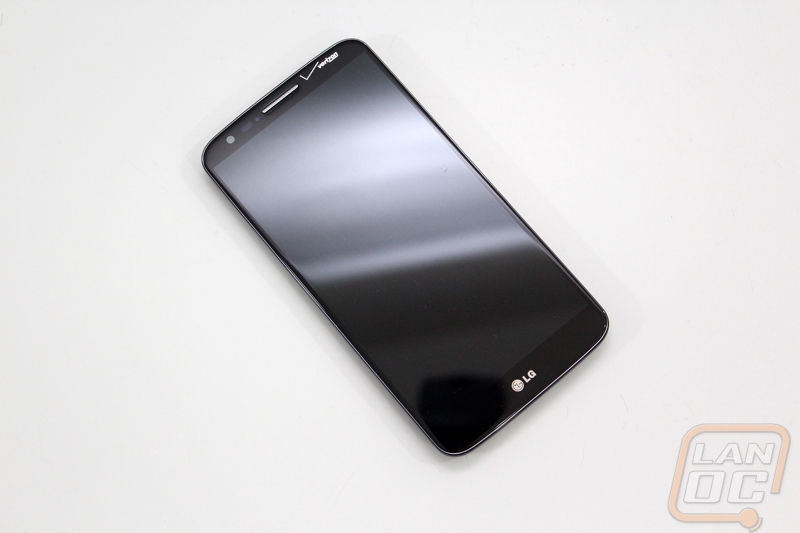 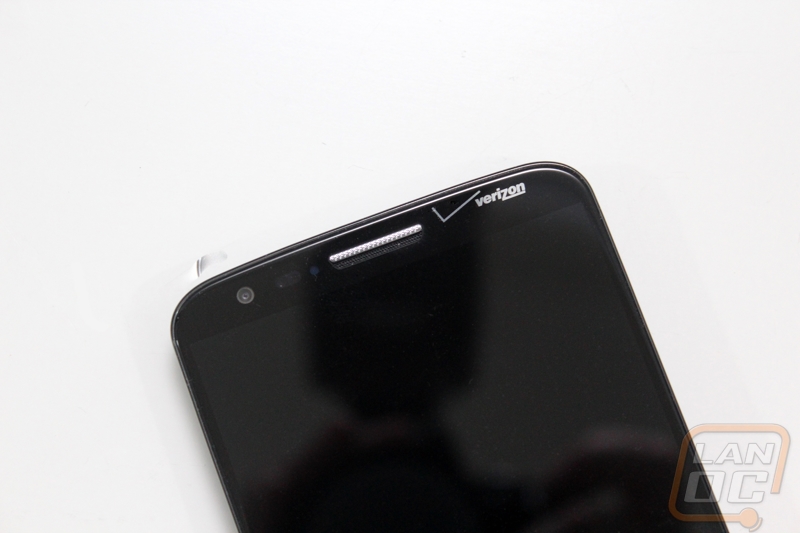 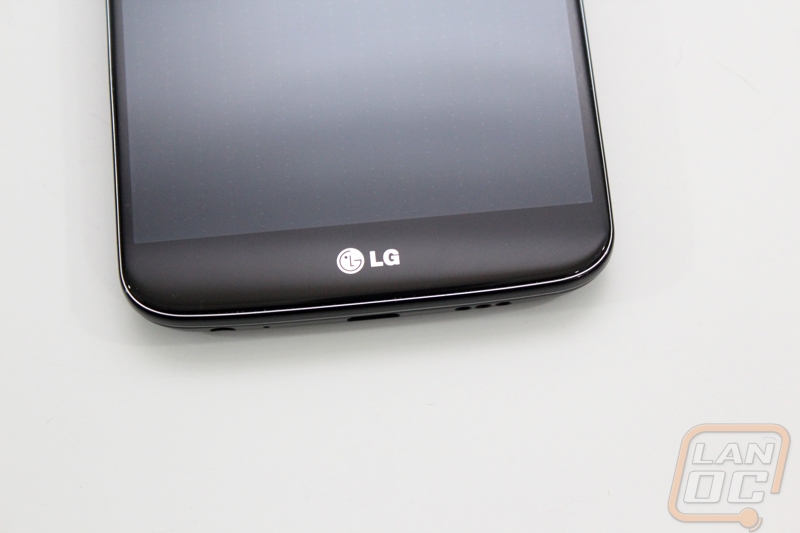 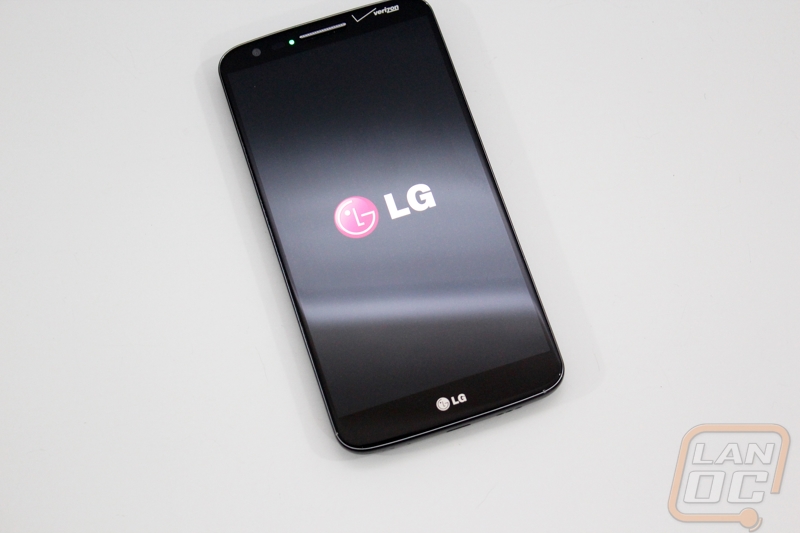 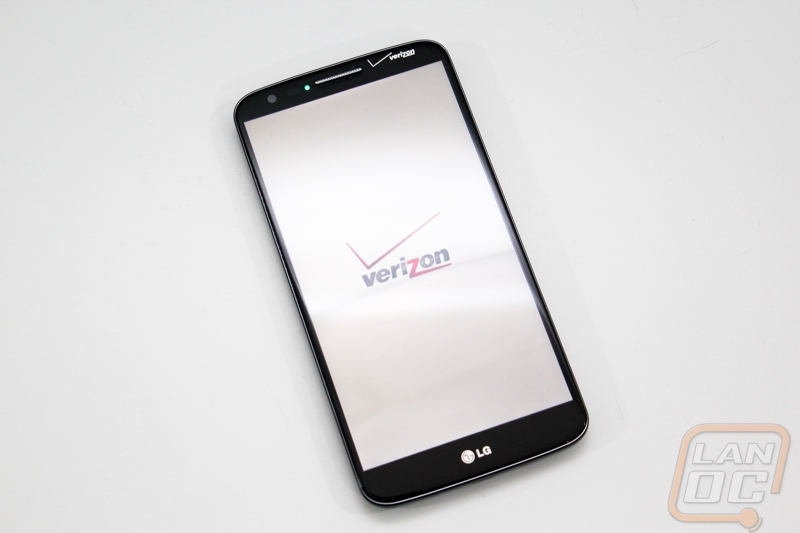 Making my way around the outside edge things are oddly boring. Down on the bottom you have a micro USB port for charging and data transfer. Also on the bottom is the speakerphone speaker on the right of the USB port, a small microphone port on the left of the USB and all the way on the left you have the headphone jack as well. All the way around the outside edge of the phone LG has slipped in a thin chrome ring that breaks up the front and back of the phone. The only other things you will find around on the sides of the G2 is the SIM card in a small tray on the left side of the phone. Up top there is a second microphone and a small dot that houses the built in IR blaster. 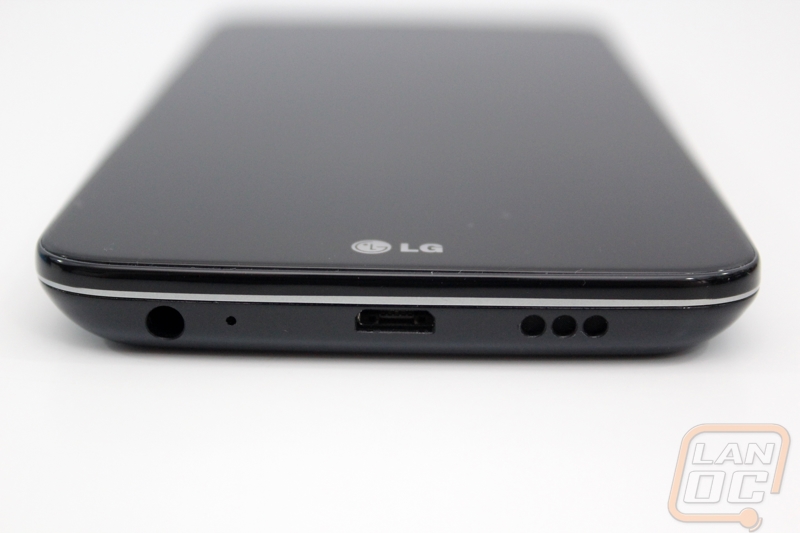 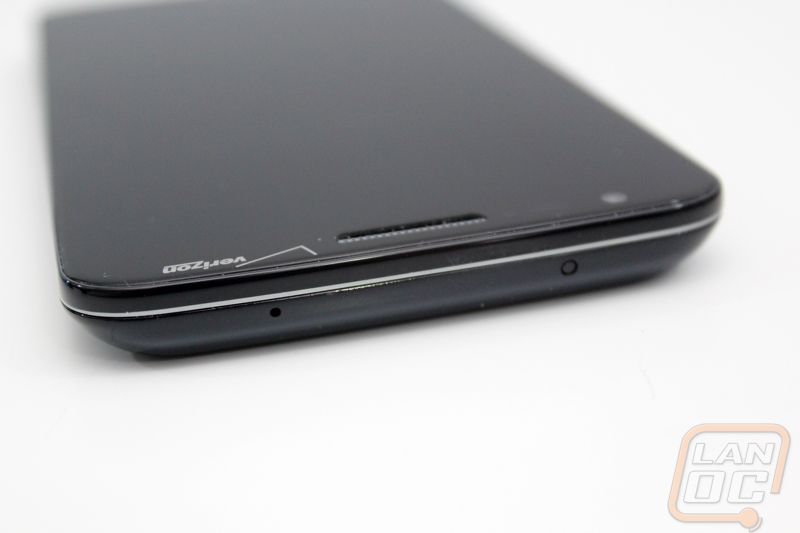 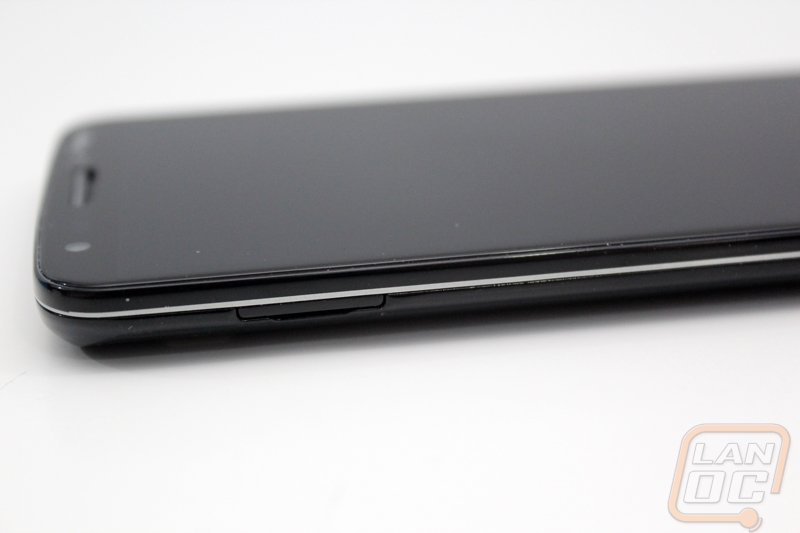 As I mentioned in our opening and hinted at earlier in this section what really sets the G2 apart from all other phones is its unique button placement. It should be noted that the back button design is specific to the carrier, although they are all similar is design and in the same location. For the G2 LG placed both the volume up and down buttons as well as the power button on the back directly under the camera lens. The volume buttons are angled and the power button is in the middle with a slight bevel. The power button has a ring on the button that will light up when it is pressed as well.

Also in this same area they included the single LED flash to the right of the 13 megapixel camera. The rest of the back of the phone consists of rounded edges on each side, and if you look extremely close you can see a honeycomb design to give the back a little more styling. In the middle of the back the Verizon Wireless logo as well as the 4G LTE logo is just barely visible. Down at the bottom there is the LG logo and you can also find your serial number here as well, but ours wore off very quickly in testing. 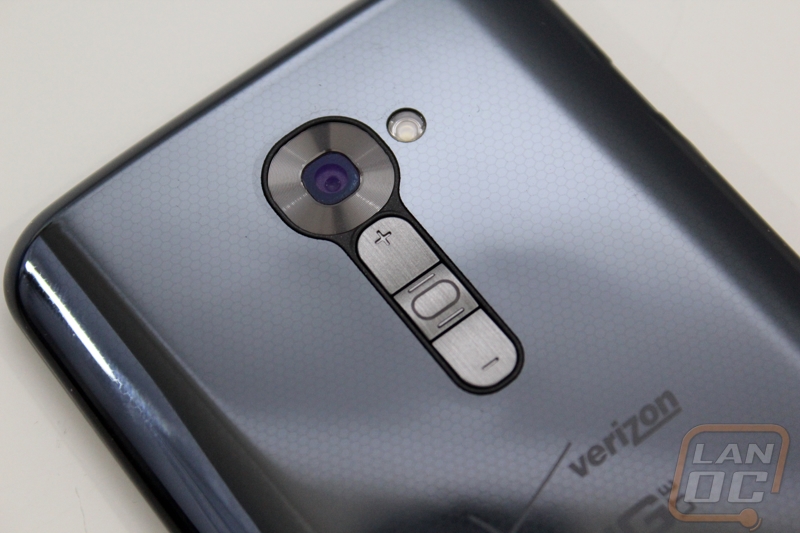 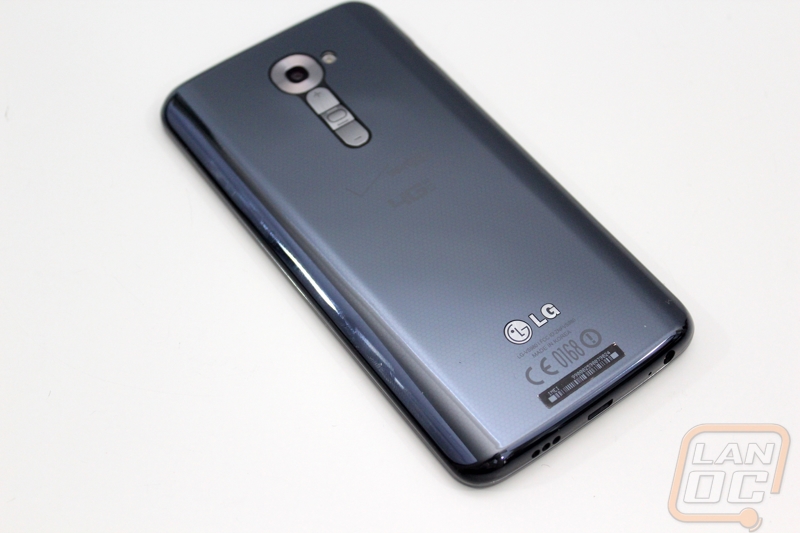 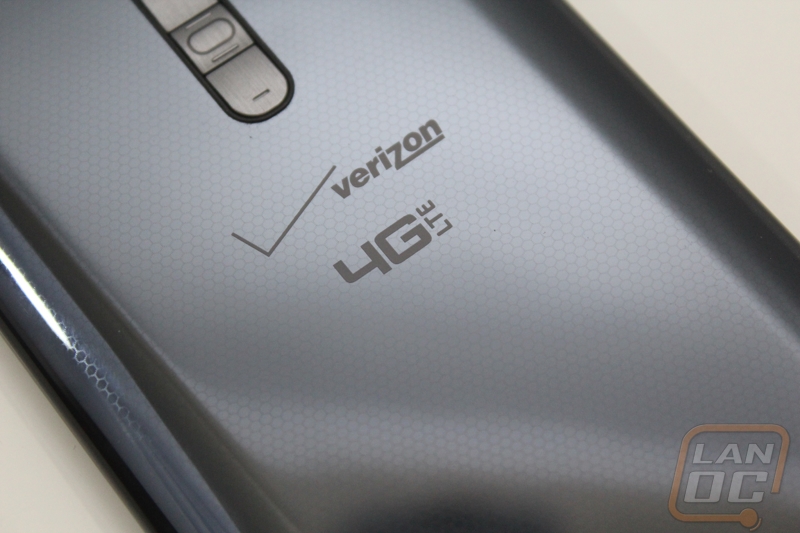 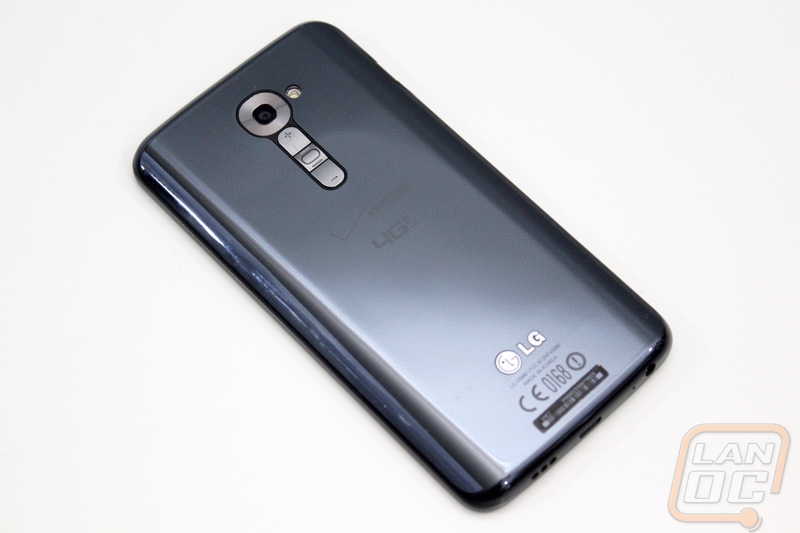 garfi3ld replied the topic: #33914 05 Feb 2014 14:22
I hope everyone is enjoying the snow today. Today I took a look at the LG G2 with its interesting button locations. Giving our review a look might be a good way to pass the time while you warm up from outside.
Read More...

We have 587 guests and one member online