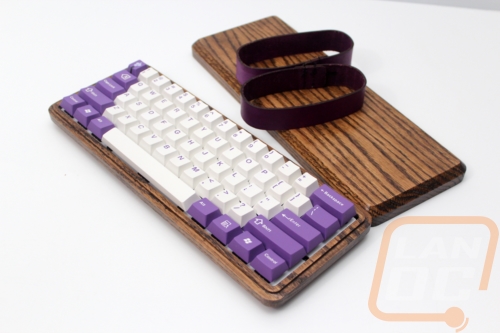 Before I could test out the Oaken 60% case I did have to get it installed. For this setup we went with a Vortex Poker 2 but you can use this case with a few different 60% keyboards as long as they have the standard Poker screw layout, a good example would be the Massdrop Infinity 60% boards or any of the Poker lineup. Before I jumped into everything I did get out my smaller screwdriver set. The screws used on both the Oaken and the Poker 2 are smaller than my standard screwdriver. I used a set I picked up at Walmart but a good example of what to look for would be something like this kit on Amazon for less than $10. You will also need a keycap puller, I suggest a wire design as the plastic pullers can sometimes scratch up your keycaps. Something like THIS will get the job done if you don’t have one. 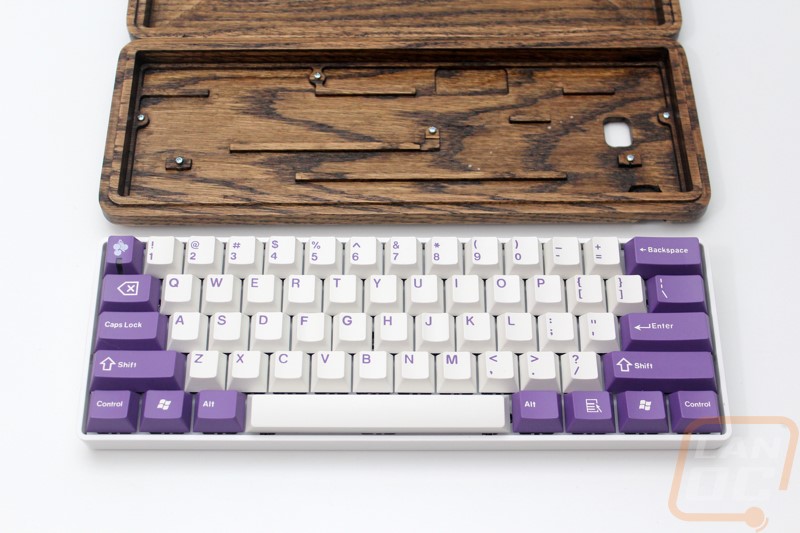 So to get started I pulled the keycaps that covered up the case screws. You will need to remove the G and H keys from the middle, the spacebar and the right ALT key, your enter key and the right shift, Tab and the Q key, and Caps Lock and the left shift. This gives us access to the six case screws. It’s really important you get the prefect screwdriver bit here because it should fit the screw tight enough that you can pull it out. You will be okay if you drop a screw but they are small and getting the screw in between the backplate and the PCB is a major pain that I went through. So a good fitting screwdriver and even better if it is magnetized. 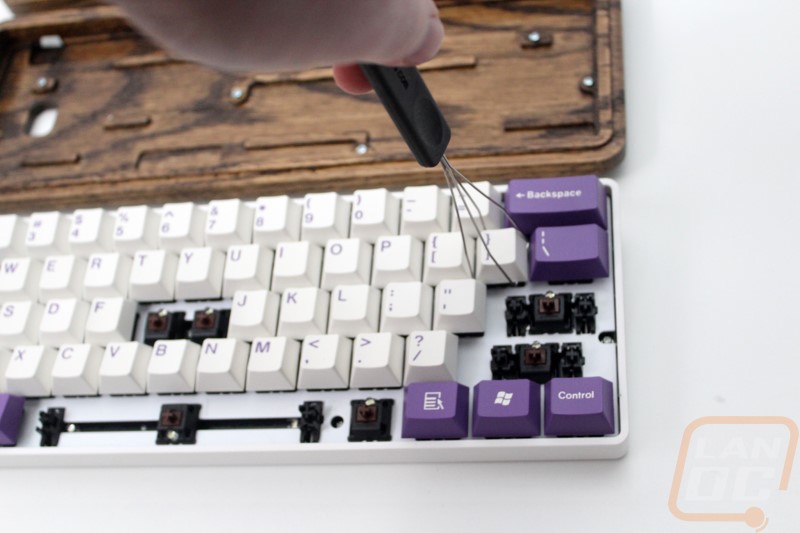 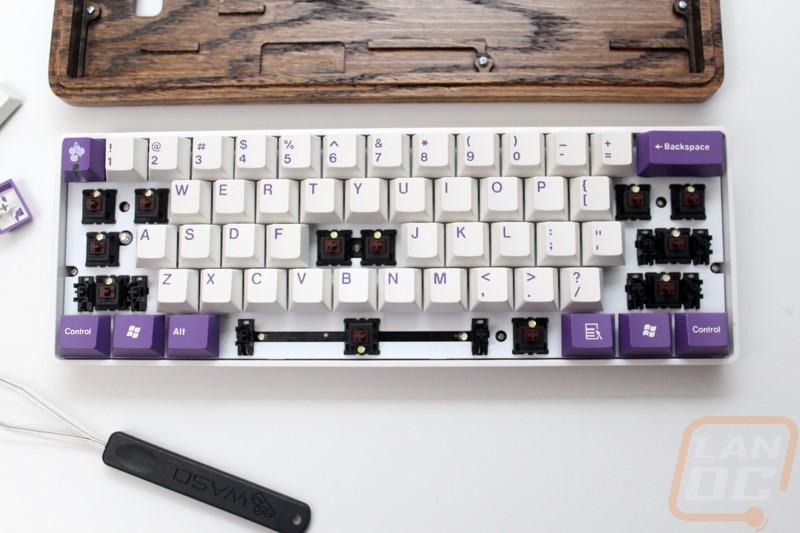 With the 6 screws removed we can just lift the PCB/Backplate/switches out from the case. From there we can actually see the differences between the Oaken base and the cheap plastic base of the Poker 2. The Poker 2 case is thinner and angled from front to back. They both have supports but the supports on the plastic case are taller, especially towards the back. 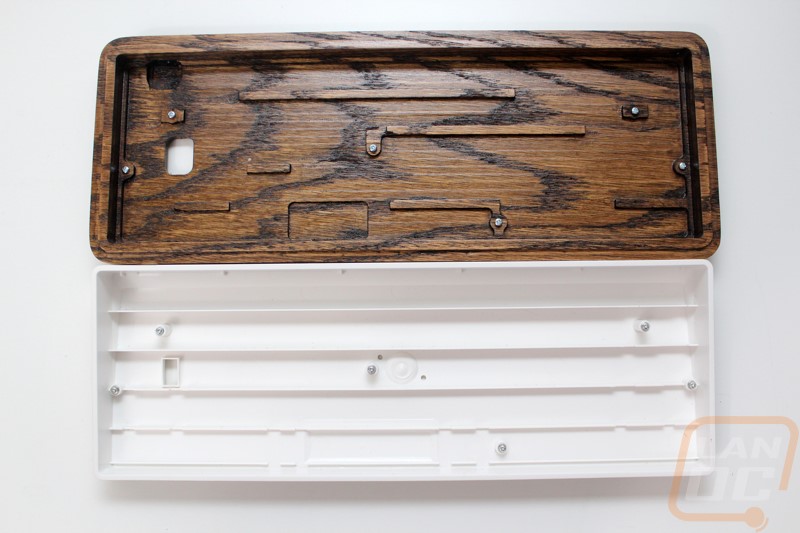 The plastic case uses self-starting screws but the Oaken comes with machine threaded screws. This is because each screw mount has a metal sleeving in it to give the best grip. This is good because the self-starting screws are really easy to strip out, I striped a few on the acrylic cases I used on the Infinity. I imagine if I had to screw them into wood I would be lucky to have two screws holding everything together. 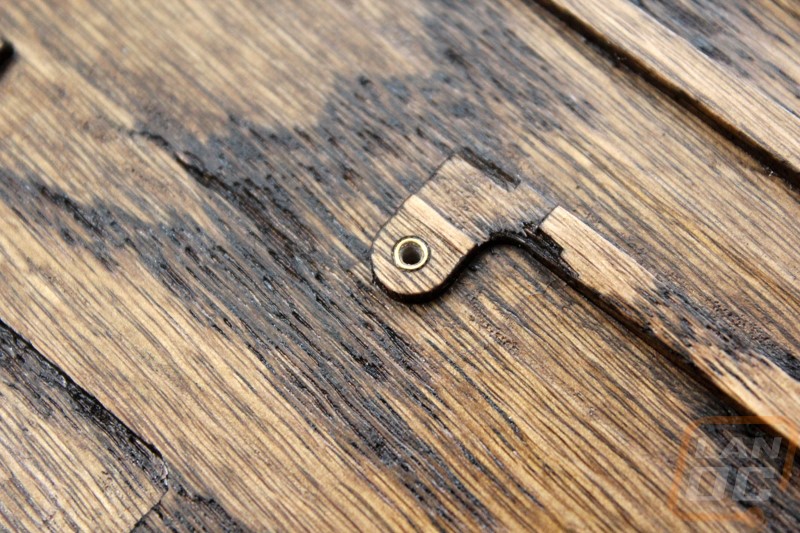 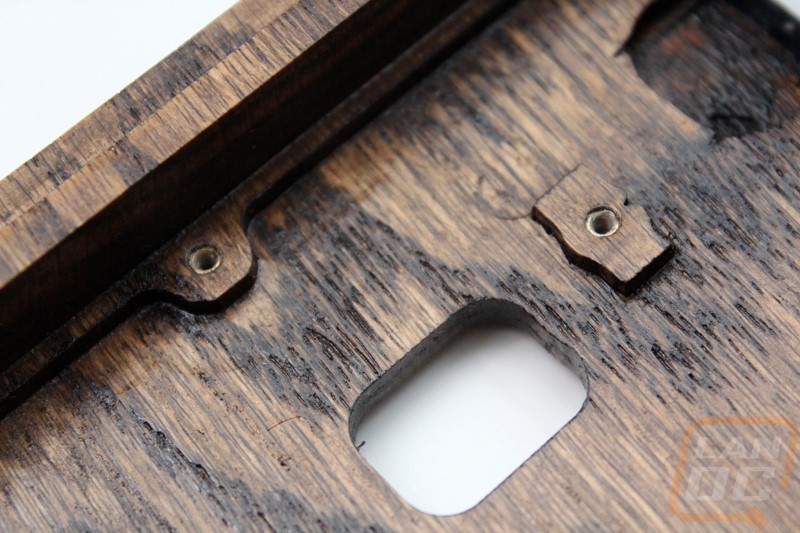 Before I put the keyboard into the Oaken case I did snap a shot of the back of the Poker 2’s PCB just so you guys know what to expect when digging in. The PCB is good looking with its black finish. The USB port sticks out past the back edge of the PCB so when you install it into the case be sure to slide the USB port edge in first. 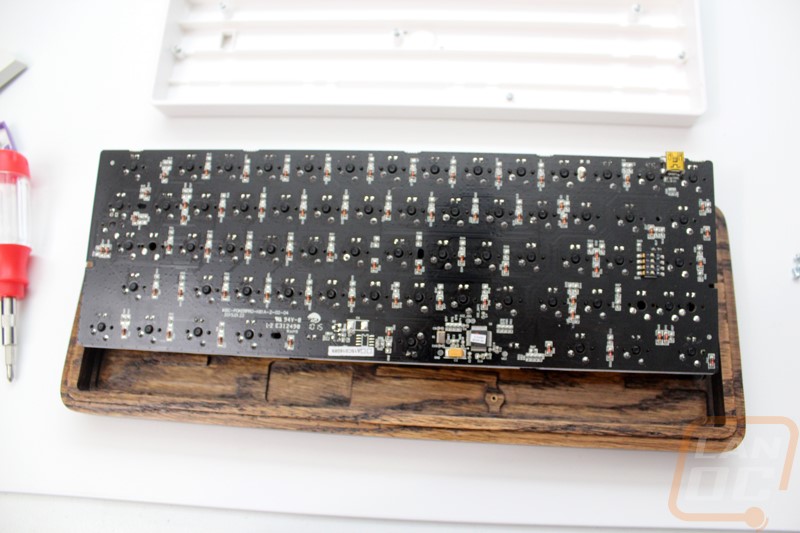 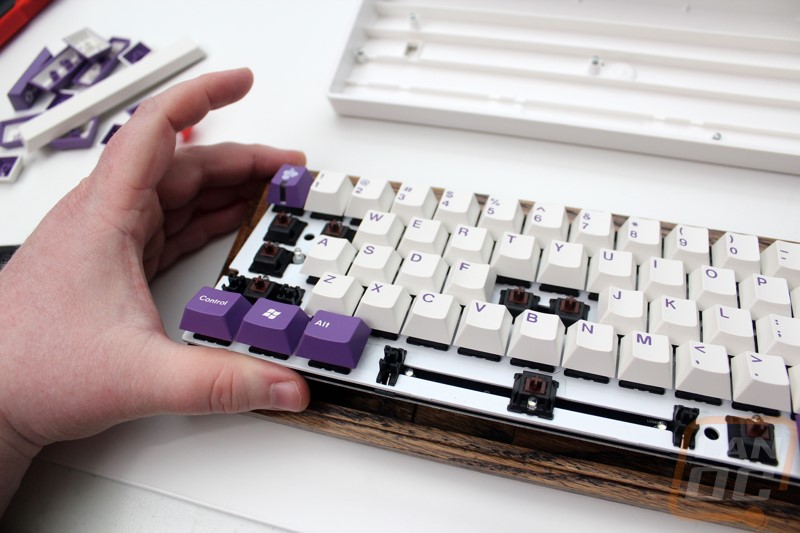 Once you slide the keyboard into the Oaken case it really is as simple as installing the six included screws. For me I ran into an issue where twice I dropped the middle screw into the hole and it got wedged in between the PCB and the backplate. When this happens you have to start all over, pull it all out, and then work the screw out like a game of Plinko. 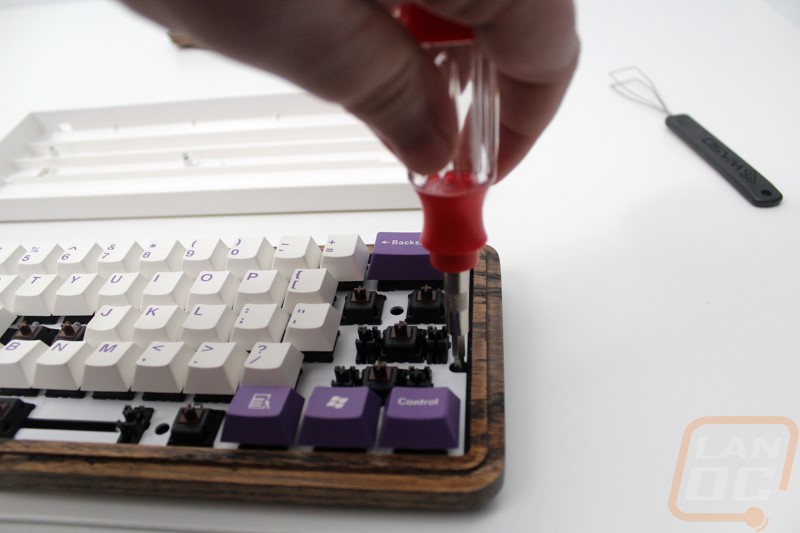 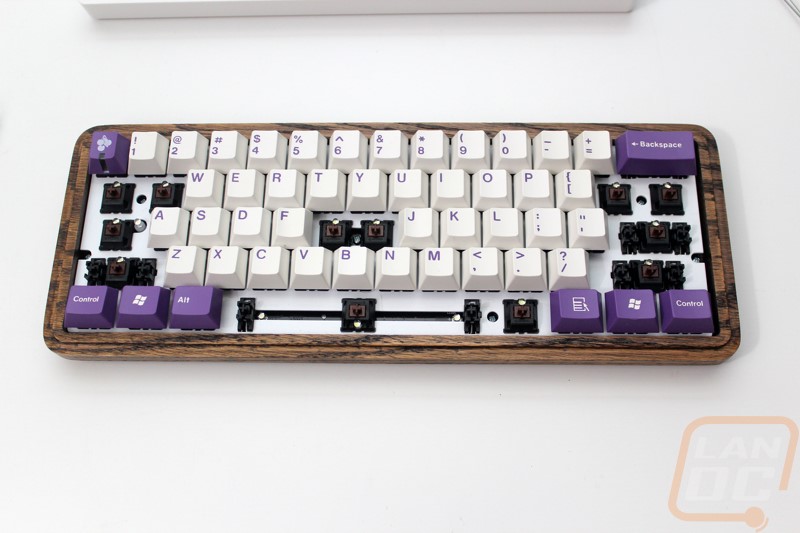 I took the shot below to show the gap under the keycaps where the stock Poker 2 case went up a little higher. But the enter key wasn’t pushed down all the way and now all I can see when I look at the picture is how that one key isn’t seated correctly. 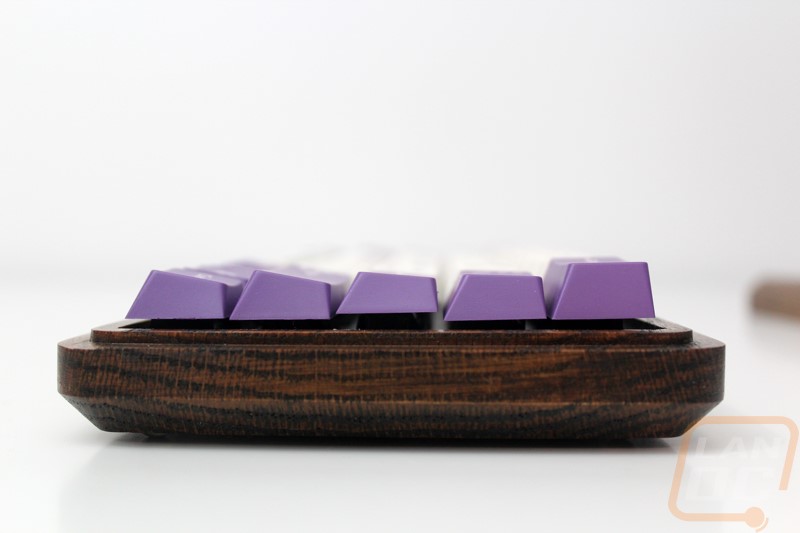 So with everything installed I jumped into testing. In my case this was packing our PCs up and taking them to a few events. Specifically, we went to Gamers for Giving 2016 and then our own even the next week LanOC v18. At both events the Oaken case got a lot of attention. People loved the wood finish as well as the idea of the clamshell case to keep everything safe. There was a shot adjustment period with my wife adjusting to using a 60% keyboard for the first time but It wasn’t an issue for very long. Our Poker 2 has white backlighting and even with the new keycaps not supporting backlighting it looked good when the lights dimmed. 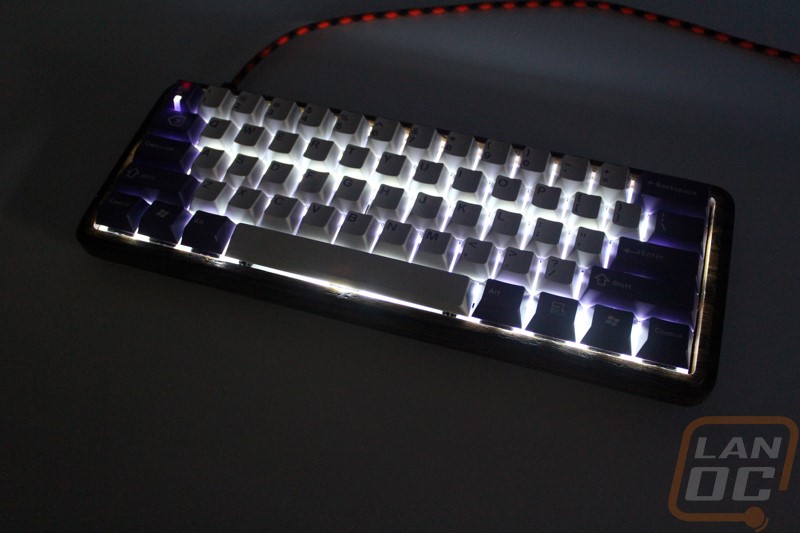 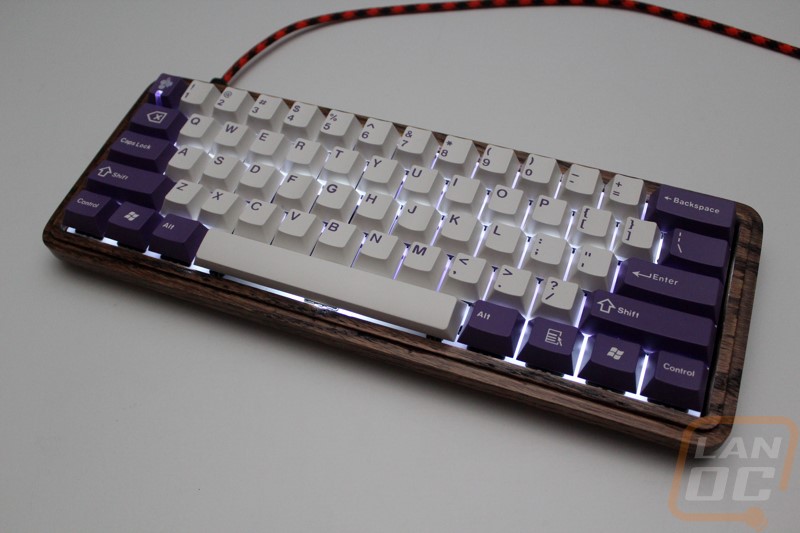 What piqued my interest though was the versatility of the top half when you are actually using the keyboard. With the Oaken case having a completely flat stance where the original case had a bit of an angle to it my wife really wanted to angle the keyboard up. All you have to do is put the lid under the back half of the keyboard and its perfectly angled. I was worried it wouldn’t stay in place or that it might move around but it didn’t. I think adding a notch into the case bottom would help this even more but it worked well so who am I to complain. If you for some reason need the keyboard to sit higher you can put the lid under it completely. Then there is the third option, the one I liked the most. You can actually use the lid as a nice wooden wrist rest by placing it in front of your keyboard. 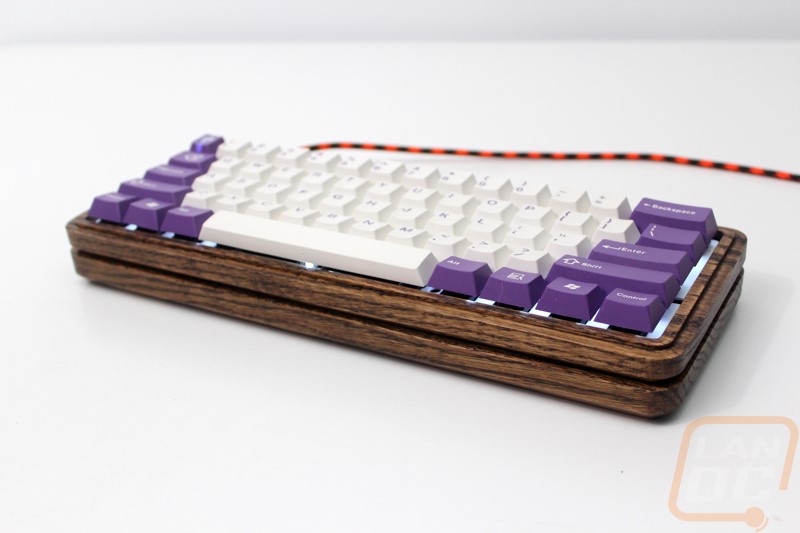 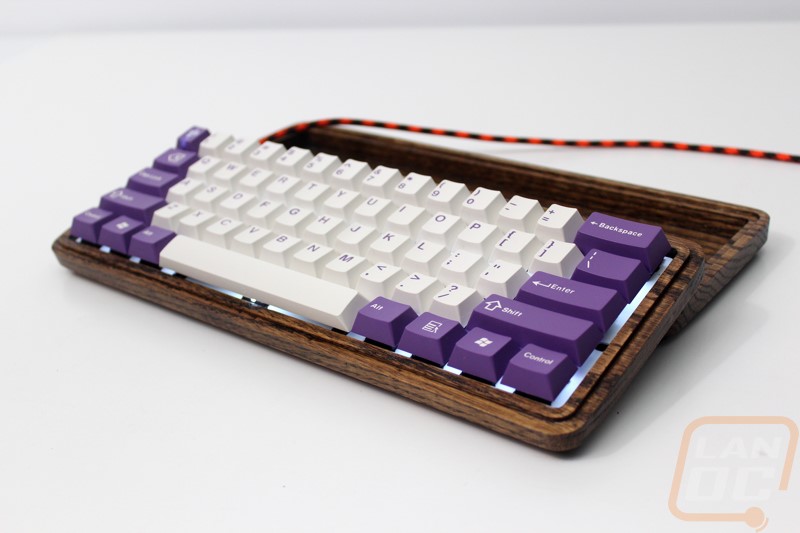 Not only did going with a smaller keyboard save space in my wife’s LAN bag and on her desk. But the Oaken case has to be the best looking enclosed case out there. With everything secured with the leather straps I had no worries at all about the keyboard getting damaged let alone getting dust or dirt in under the keys. 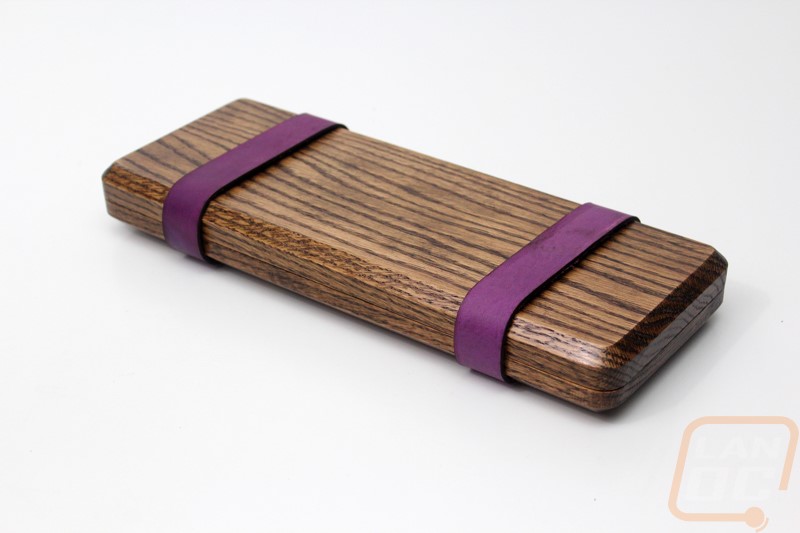 We have 1382 guests and one member online