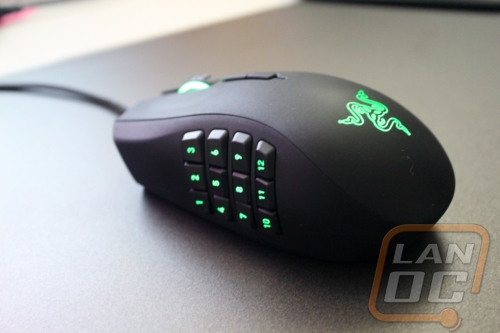 My first impression of the redesigned Naga 2014 was that Razer took a few of the design features of the Logitech G600 and combined them with the original Naga. The new design is wider and slightly less curvy than the original Naga making it look a little more like the G600. You still have a contoured shape that fits your ring finger but this time the contour is longer and extends most of the way along the right side of the mouse. The new design features a little extra styling on the front with two mesh panels. On the far right side for grip Razer has included a rubber pad, this isn’t something I have seen them do before but I suspect this is related to a design that doesn’t look to be friendly to people who lift their mice (like me). Hopefully the grip will be enough to help that. 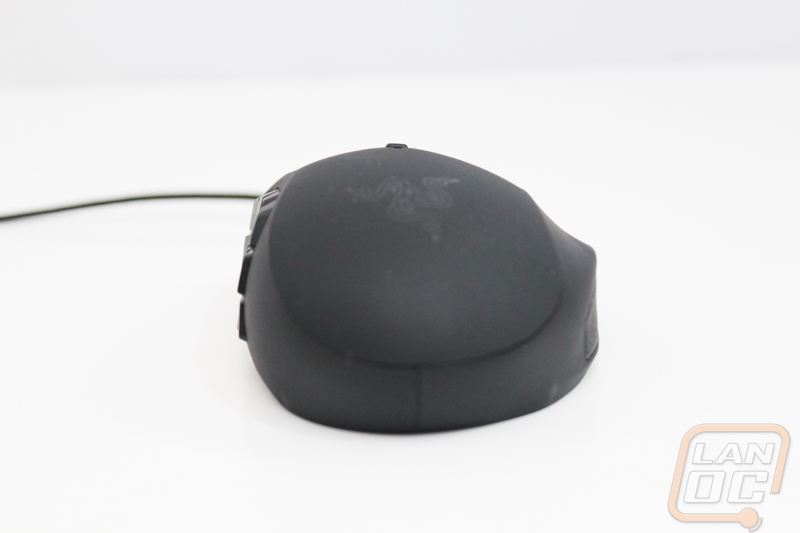 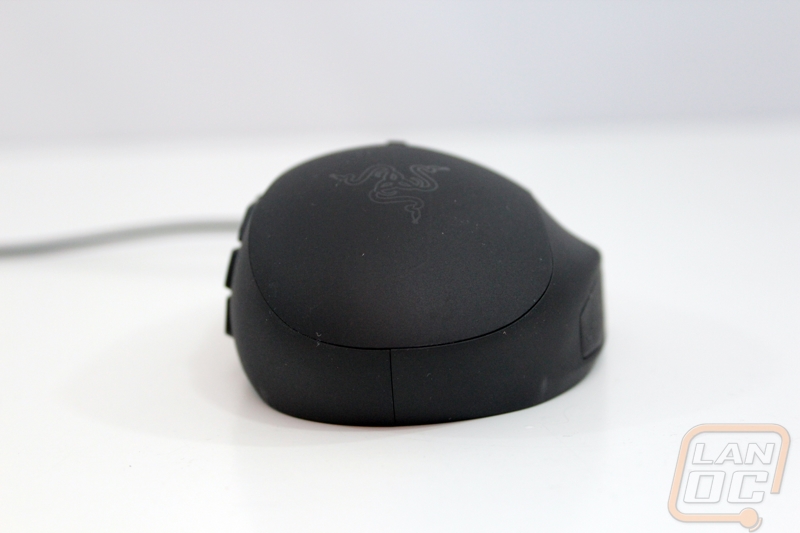 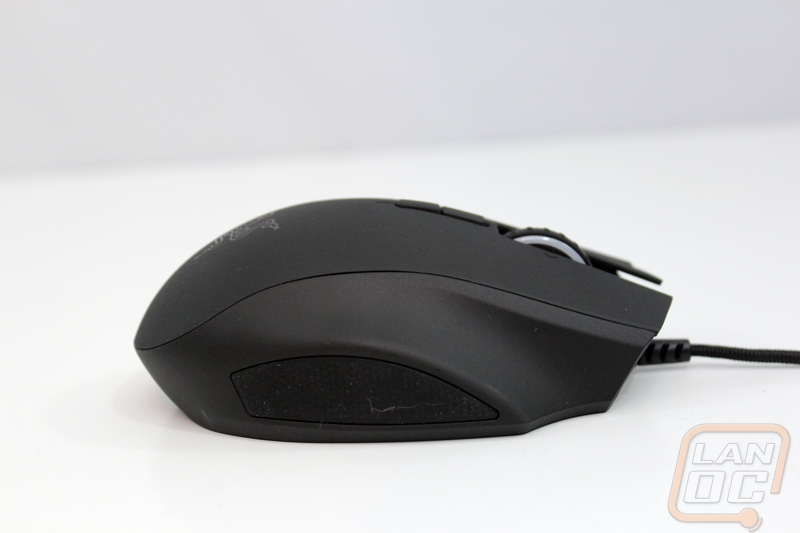 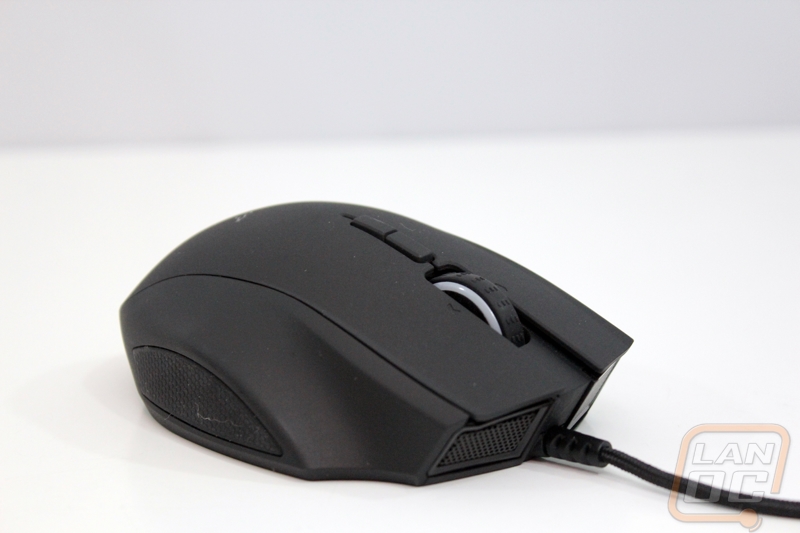 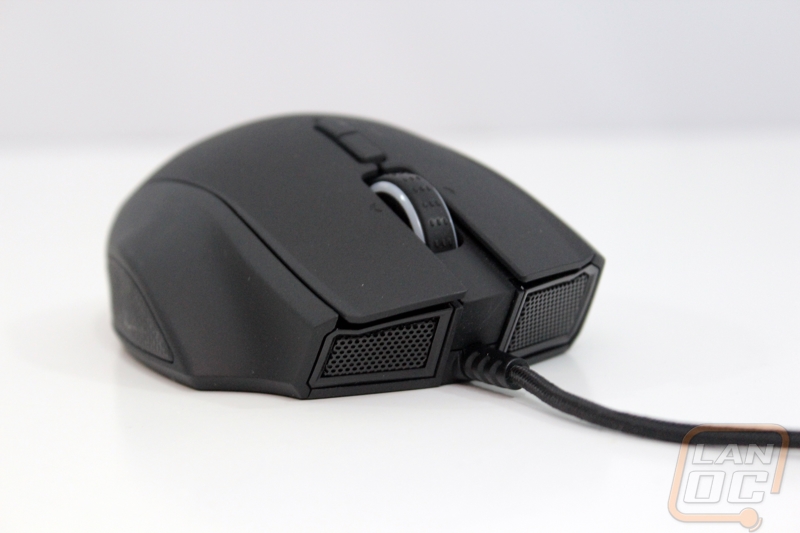 Much like the original Naga, the 12 button array on the left side of the mouse is what gets your attention when checking out the Naga 2014. The 12 buttons are laid out like you would see on a phone in rows of three. Each button is backlit and if you look closely you can see the 5 and 11 buttons angle out more to help you place your thumb without looking. 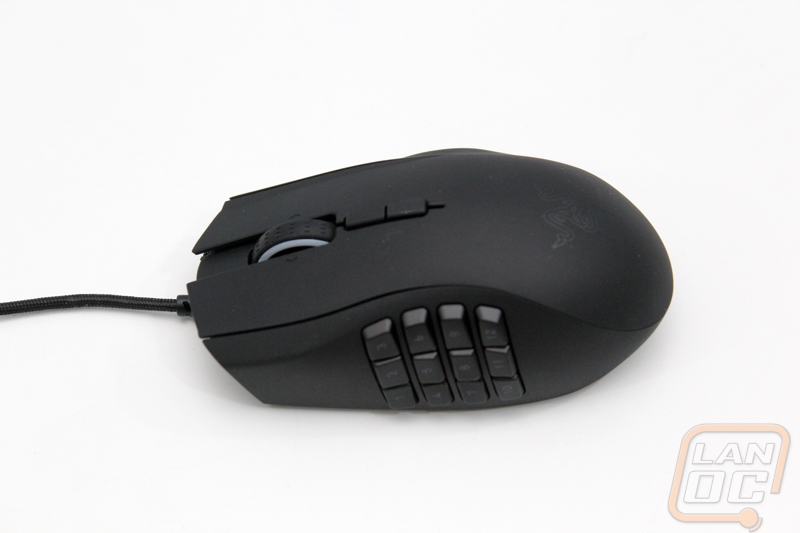 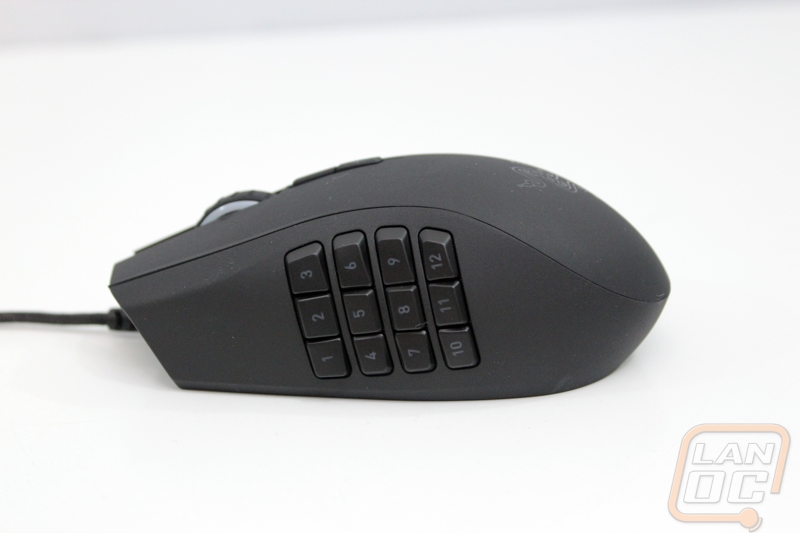 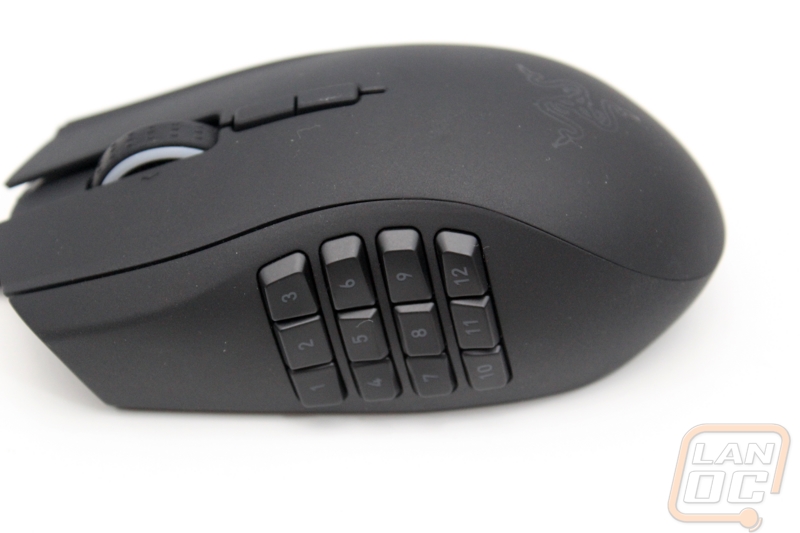 Up on the top of the Naga 2014 you have two buttons behind the scroll wheel as well as the buttons associated with the scroll wheel itself. For the first time, other than a Microsoft or Logitech mouse we have side clicks for the scroll wheel. This can be used as additional keys when gaming and for easier browsing when out of game. I hope they continue including this on all of their future mice as well. The scroll wheel itself is plastic with a rubber ring around it with small rows of numbs spaced out for traction. The two white lines you see in my photo glow when the mouse is plugged in as well. 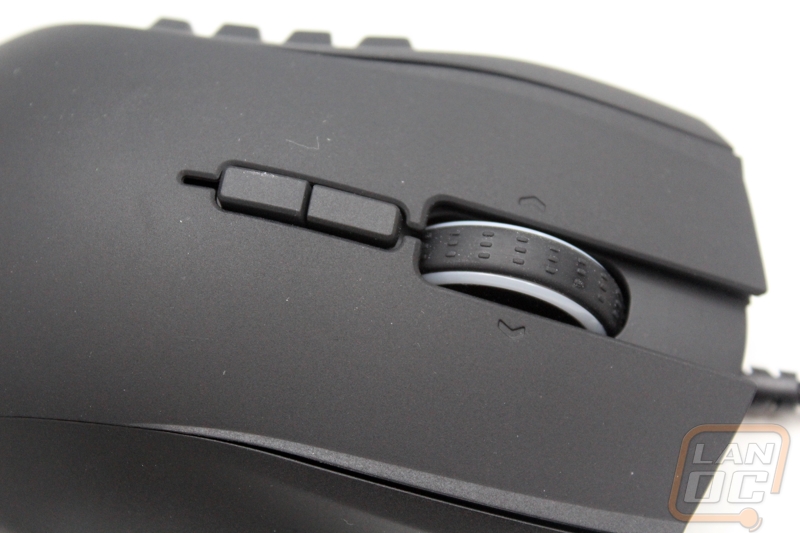 On the underside we have considerably larger Teflon pads than what I have seen on past Razer designs. This should hopefully cut down on the wear on the pads, something I have had issues with in the past with Razer’s other mice. They also put a Teflon ring around the sensor as well. Beyond that there isn’t much going on the bottom, beyond your serial number and all of the needed compliance logos. 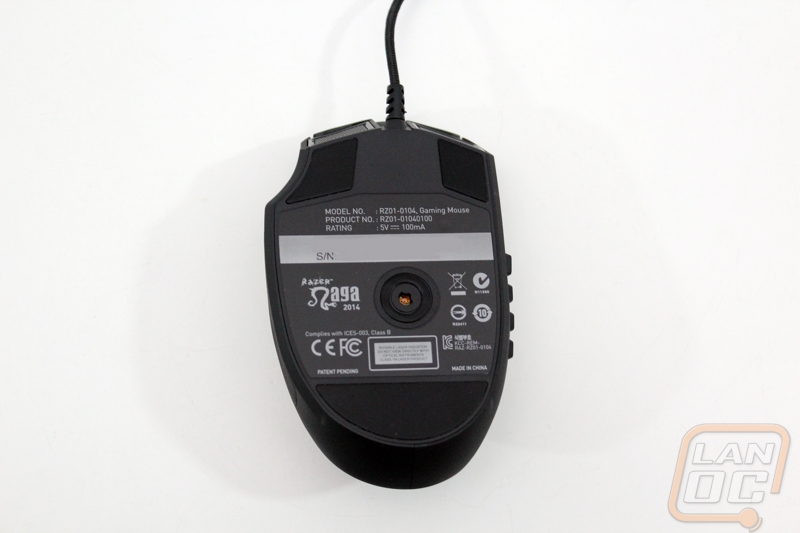 The cord for the Naga 2014 isn’t anything different from the original or any other Razer mouse really. You have the gold contacts and a 7 foot long braided cord to give it a little style and to also protect the mouse cord. The braiding is a tight weave so there isn’t too much catching if you have a sharp edge on your desk for example. 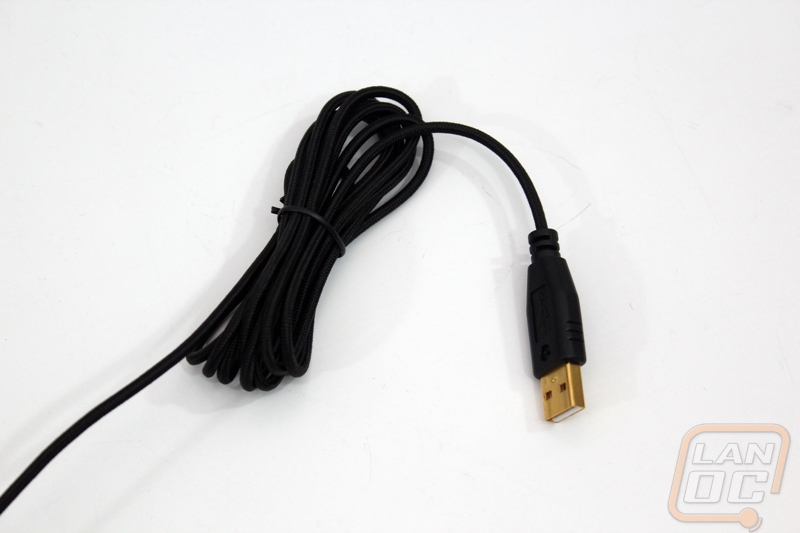 I mentioned before that I thought the new design reminded me of the G600; it’s only fair to put them next to each other to see how they compare. When you look at the overall shape from behind you will see the G600 is still a little boxier than the new Naga. The two buttons behind the scroll wheel are very similar as are the side buttons. The G600 has angled the side buttons in a way to split them up into two packs while Razer has angled the Naga’s buttons in a way to make them all useable at once. With so many buttons we will have to see which is the better choice in my testing. 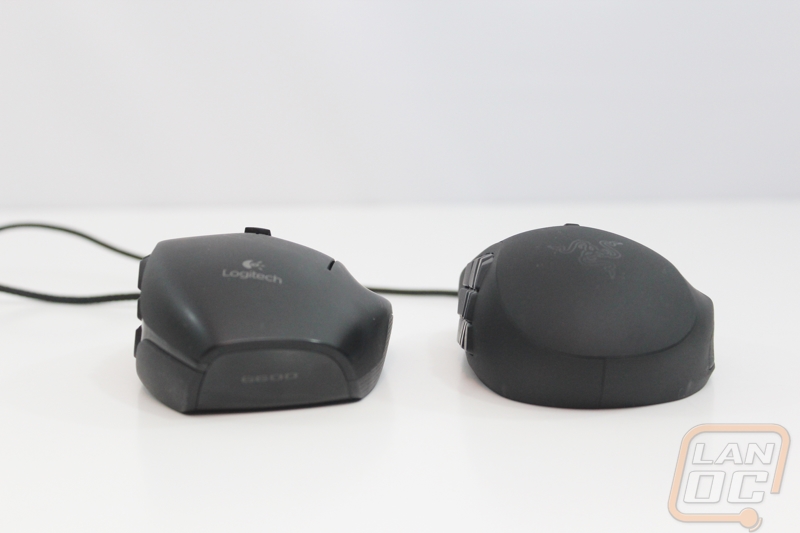 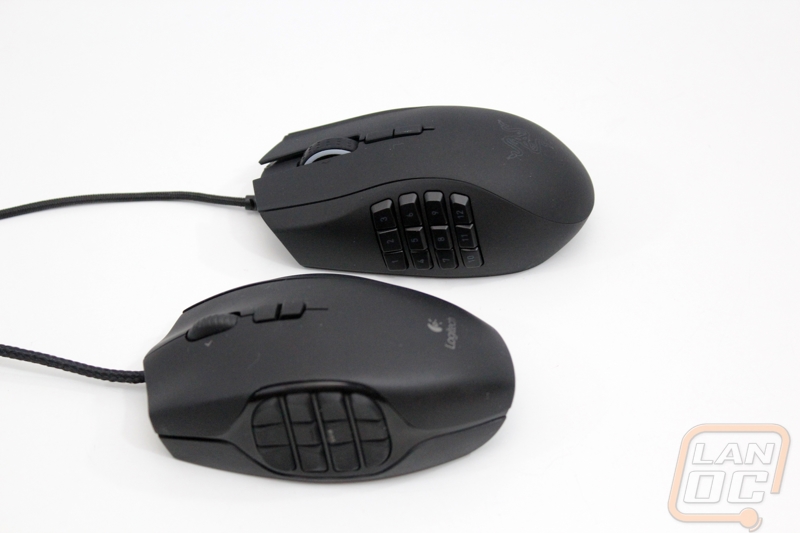 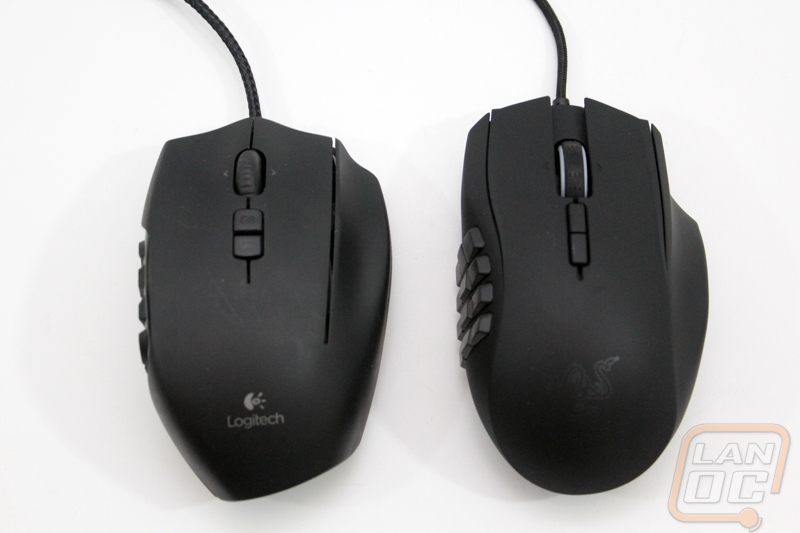 Below I have photos of the new 2014 Naga next to the original design to show how much has really changed. For starters the finish all along the sides and buttons is different and less glossy; I have seen that this is something that Razer is doing across the board to prevent finger prints whenever they can. The original Naga did have two buttons to the left of the trigger button that have vanished and replaced with the two buttons behind the scroll wheel. Speaking of buttons, the side buttons of the original Naga are clearly less defined when compared to the new model. With them sticking out more they were able to give more shape to each button to help define its location. I mentioned it before but you can see that the new model is wider and less curvy compared to the original. This can be seen from above and from behind, the original Naga is very curvy while the new design is closer to the G600 for shape than the original. 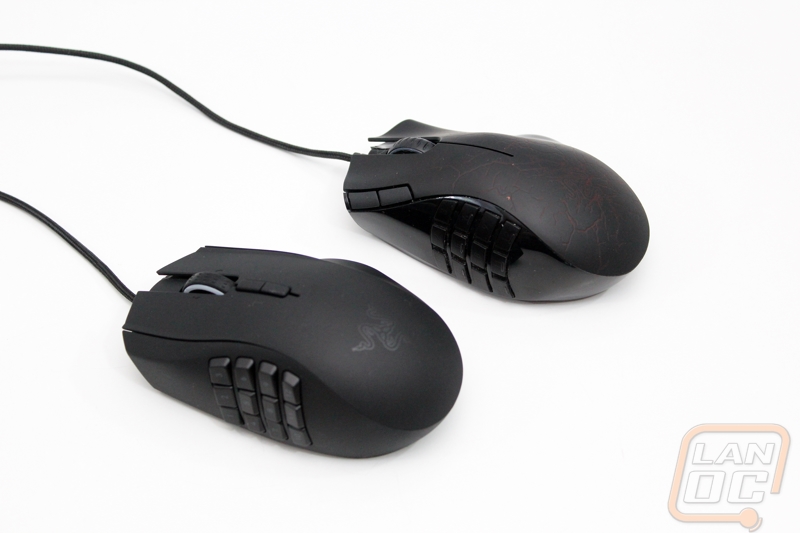 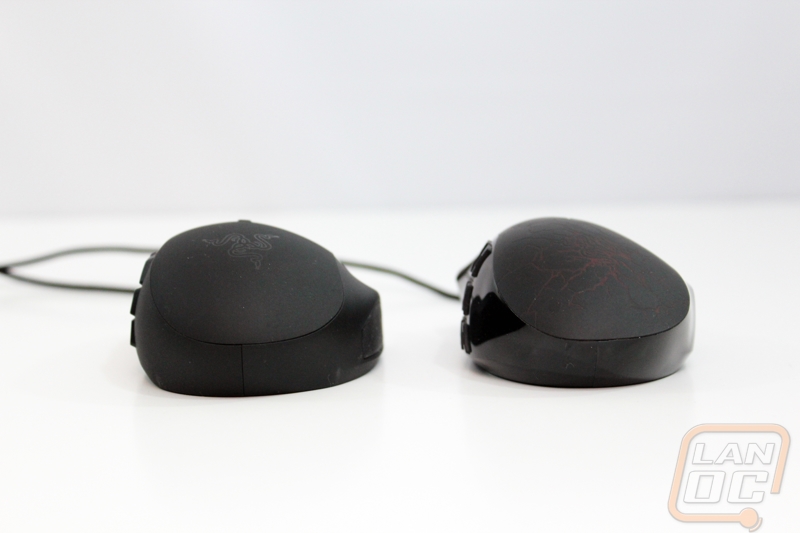 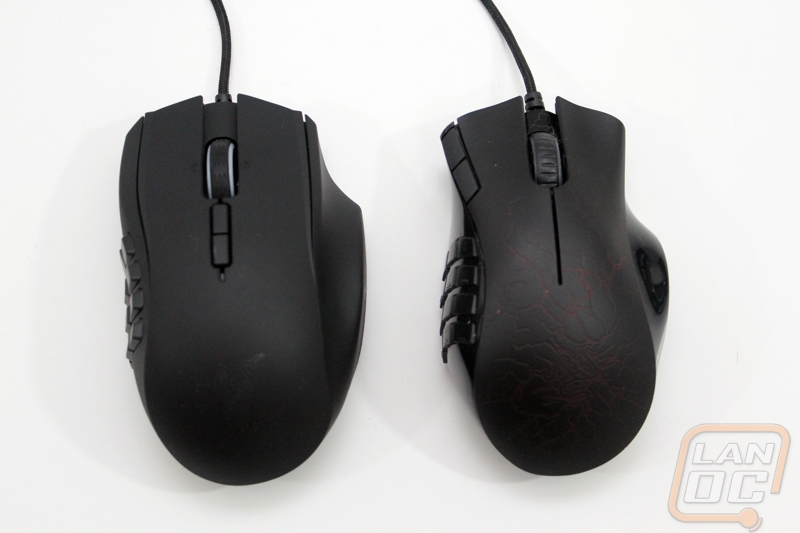