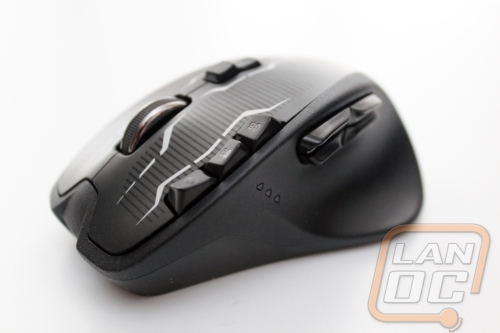 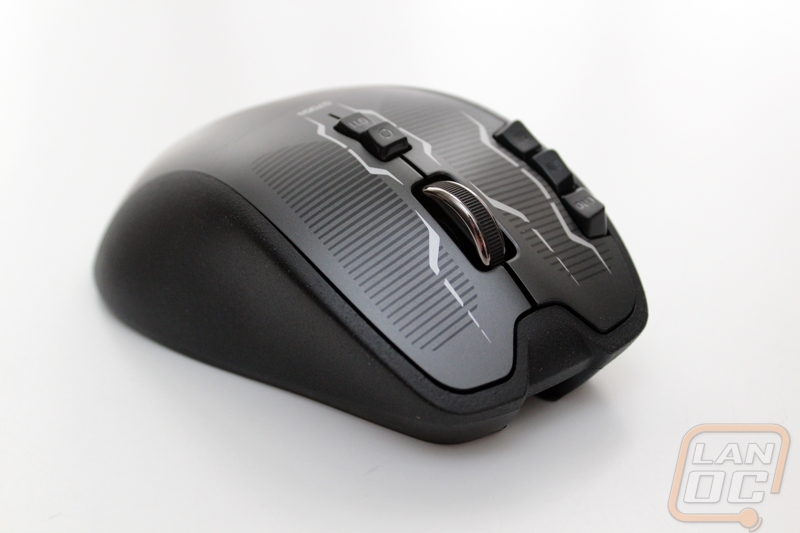 With the G500s I had a good idea of what to expect both because I had previous experience with the G500 as well as past Logitech mice of that shape. But when going into the G700s I really wasn’t sure what I would think. For one, the shape difference between the G700 and the and the G500s is a little more aggressive but I was able to pick it up and run with it without an issue. I was especially impressed that Logitech was able to pack in 13 programmable buttons (including the triggers) without having any buttons in the way or easily bumped. The four side buttons manage to be easy to reach and also hard to bump unintentionally all at the same time.

So what about the G700’s sensor? The G700s uses the Avago S9818 Laser sensor; this is slightly different than the G500s that had the S9800. The overall DPI is the same but with a higher track rate as well as max acceleration. That means that the acceleration issues that can be seen on other S9800 mice will still show up on the G700s. In my testing I did see some, but only a slight amount when using a hard mouse pad. Tracking was still up to par in the rest of my testing. Those who are only interested in perfect sensors will not be happy, but the average gamer is going to love the G700s.

The last thing we needed to look at was the G700s’s wired and wireless performance. As we went over earlier, the G700s comes with a wired cable and a small wireless dongle. The wired cord can be used for charging the G700s as well as turning it into a wired mouse for when you can’t run wireless. Obviously running in wired mode I had no issues but how was the wireless performance? Originally I had the dongle hooked up to a loaded USB hub and I experienced wireless lag. When I switched over to another port the lag went away. Wireless lag wasn’t noticeable at all when hooked up to the proper port, in fact switching from wired to wireless made little difference in my experience other than not having a wire holding me down. As for battery life while on wireless I have a nasty habit of never turning the mouse off but the G700s lasted longer than expected. In the few occasions that the battery did die, I was able to plug right in with the wired cable and keep going, hardly interrupting a game.  Really my only complaint with the setup is that the USB cable is much stiffer than a normal mouse cord, this just gave me even more reason to jump to wireless any chance I could.

I do not believe it get much better than than this.

I use the side button a lot for push to talk, and in some FTP's for throwing grenades.

When the battery is low, can just plug in the cord without skipping a beat.

The only thing I could say about this mouse is that the cord seems to be stiffer than other mouse cords. It may because you are using to no resistance while wireless though and when you switch, you can tell.

Theoretically if you get 2, and when mouse is low on power, you can just switch them, which I've seen people do. It is also compatible with G700, which I also tested.

Wingless92 wrote: I hate batteries so I will never own a wireless mouse, keyboard or headset. I love Logitech products though.

I think it is fare to say that Logitech is the all around best peripheral manufacturer. From their high end PC enthusiast mice and keyboards to the $10 Logitech K120 their all pretty solid, and last for years. My Logitech x518 optical mouse is over 5 years old. My wife still uses the 518 everyday. Like I said solid.
Read More...

We have 1403 guests and no members online