Microsoft's Sidewinder line, specialized gaming peripherals for the PC, is starting to see quite a few pieces in it's roster. You may recall the Sidewinder X6, their first keyboard made entirely themselves, with several great features that appeal to gamers. This month will see the launch of the new Sidewinder X4, and Microsoft has sent a sample to check out.

Packaging
The X4 is packaged similar to the X6, a rectangular cardboard box with a ridged, red front showcasing silloutes of popular gaming characters and a graphic of the keyboard. While its not an actual photo of the X4, it does show a lot of the keyboard's features, including assignable keys and red backlight. 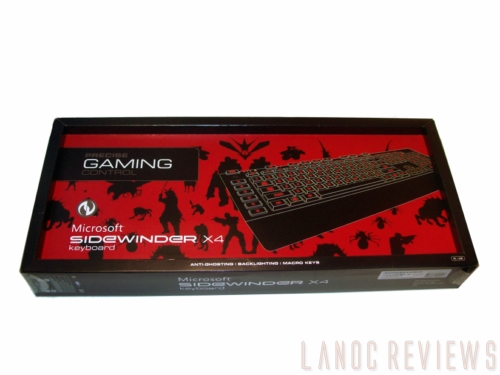 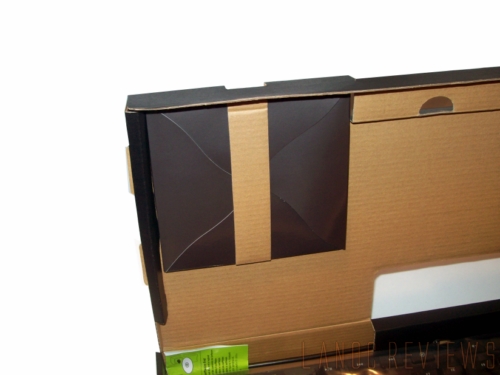 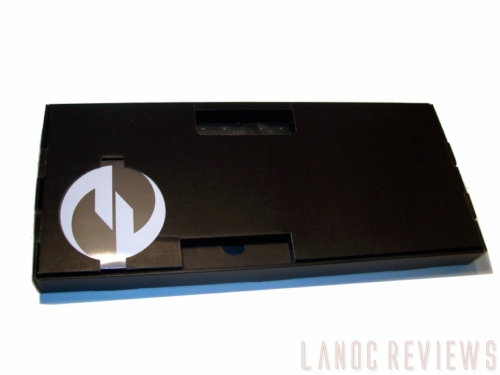 Inside, a black cardboard enclosure cleverly conceals the keyboard, installation disk, and manual. The X4 is plastic wrapped to prevent dust and other particles from smudging up the face of the keyboard, a problem that you're likely to get well aquianted with.

The software included will install the latest version of Microsoft's IntelliType Pro, 7.1. The interface is clearly designed by Microsoft, looking much like any common Windows option pane. Here you can set-up all the keys, including the playback and volume buttons, assuming they're not already configured. You can also alter the character repeat and delay speeds and cursor blink rate.

More importantly, however, are the assignable buttons are the left side of the board. Using IntelliType, you can assign these six keys to any single command or macro, but that is covered more thoroughly below. As far the actual installation of the keyboard, simply plug the USB cord into an open USB port. 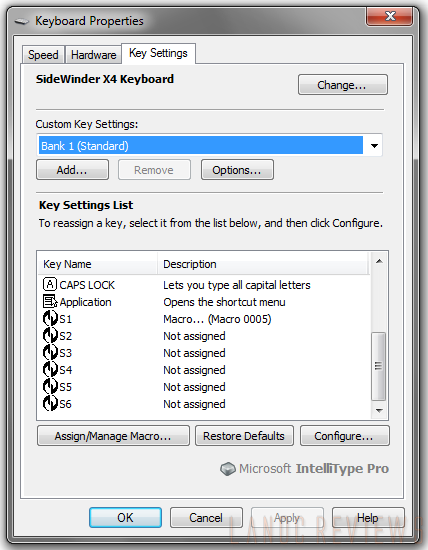 Performance
The X4 sports a wide-array of features that appeal to the gaming demographic, beginning first with it's programmable keys. As mentioned before, the S1-S6 keys that line the left edge of the board can be assigned to commands and macros. For instance, consider any MMORPG such as World of Warcraft or Guild Wars. If you have any character build that consistently runs the same skills, perhaps buffing, you can program one key to cast them all.

This can be acheived two ways: the first remember what shortcut keys the spells you want are and program them into the macro using the IntelliType software. When programming the macro this way, you'll use a screen that features an Editor window, showing you the keys you've pressed, whether they are still pressed or released, and the delay between. You can even go in manually with your mouse and insert the cursor to edit parts of the macro, almost as if it were a sentence in Word. It can be difficult to program some keys using this method, however, such as Tab. Instead of inserting the key into the macro, it will tab to the next avaiable selection in the window. You instead have to drop a menu below to choose the button as a special character. 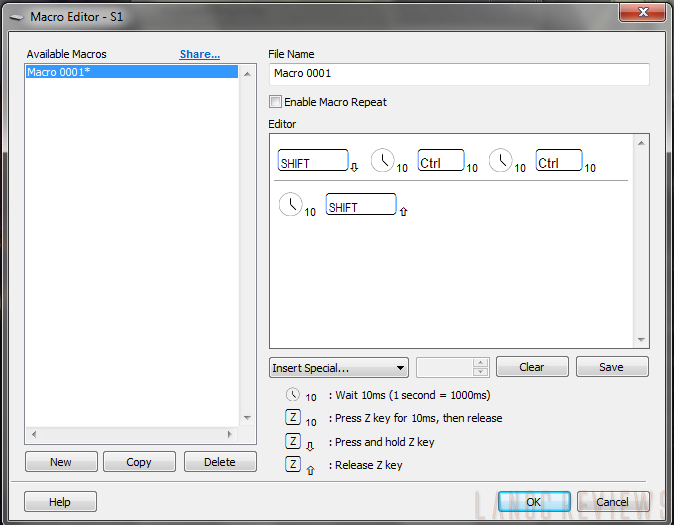 The second, and perhaps more convenient method, is to use the Record button. This is one of the coolest features of the X4: simply press the Record button (the circle inside the square key above the F1-4 row), press the programmable 'S' key you want the macro assigned to, then press the shortcut keys desired in-game, and hit the Record button again to finish. Now when you press the chosen macro key, the actions will be repeated.

Better yet, the X4 features automatic profile switching, meaning when you launch an application or game that is assigned to a profile (achieved easily using the software), the profile created specifically for it will automatically be applied. There are also three switchable profiles available to cycle through using a key on the board, and a LED indicator to tell users which is currently selected. 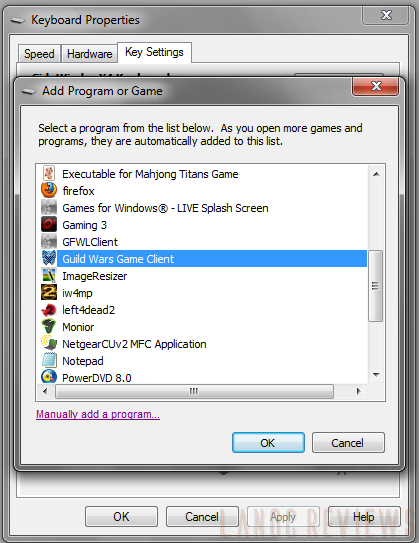 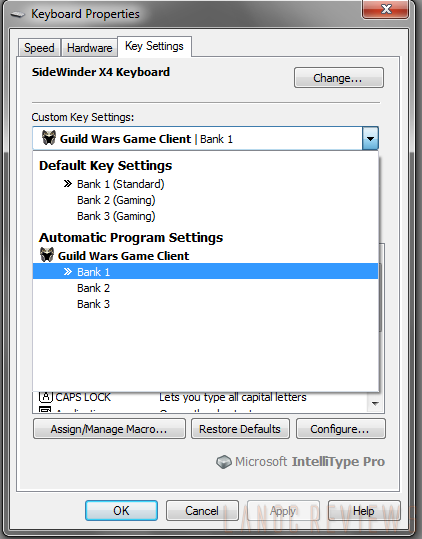 The X4 also features advanced anti-ghosting, which allows users to input up to 26 keys at one time without blocking or phantom keystrokes. The keyboard, as mentioned before, is lighted with red behind the keys, which is great for gamers who prefer to play in the dark but still need to see the keyboard. A light-setting button is even included on the keyboard, allowing the user to switch between four light modes (1 being off, and 4 being the brightest).

This keyboard looks great as well. It has a glossy finish on the surface around the keys, which makes it shiny but loves to hold finger prints and oil. A hand bar rest is also build in, made from a coarser material to keep your hands from sliding all over, and more than likely to help save your sanity from constantly wiping grime from your hands off. The X4 also includes expandable legs on the back, allowing for an ergonomic incline, the absence of which was one of the complaints of the X6. 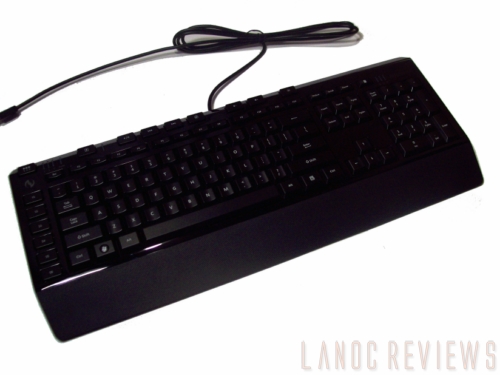 Overall
Its hard to find anything to dislike about this keyboard. The keys make a pleasant sound when pressed, though this is more of a preference than anything, I enjoy simply typing with it. The programmable macro keys are beyond useful for both gamers and everyday taks. As a matter of fact, I programmed a quick macro to help clear out some spam registers on our website. When you throw in anti-ghosting technology and auto-switching profiles, the X4 is a great value and outstanding contender to enthusiast gaming keyboards on the market. 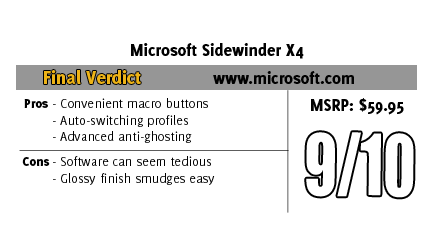 Author: Lersar
Contributing Editor / Event Staff
Adam is a big proponent of LAN parties, esports and speed-running, and helps organize our semi-annual LAN events. He has covered hardware and software reviews of a wide variety, but most content these days come from event coverage, such as other LAN parties.
Discuss this article
Log in to comment
Posts in discussion: Microsoft Sidewinder X4

We have 1500 guests and no members online