There is no disputing ATI’s HD5770 is one of the best buys right now for both pure gaming value. Of course some manufactures don’t leave well enough alone and love to tweak a little more performance out of their cards. Today we are taking a look at Gigabytes HD5770 SOC, SOC standing for Super Over Clock. With a 50MHz bump over the standard offering we are curious how much of a performance boost you will see. The only way to find out is to toss it in our test rig and use it as an excuse to play a few games. Let’s jump in! 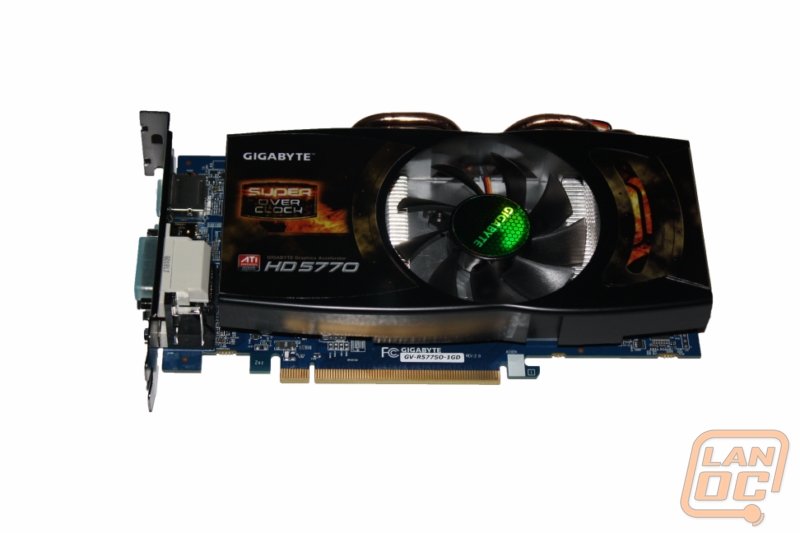 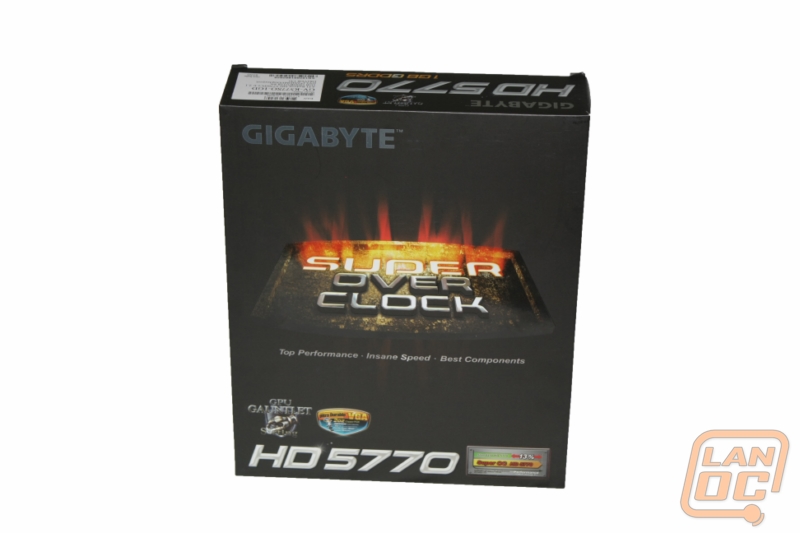 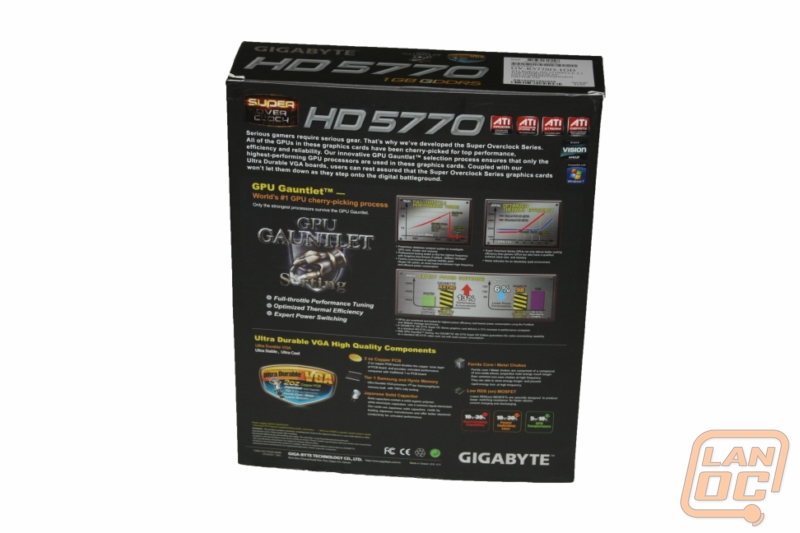 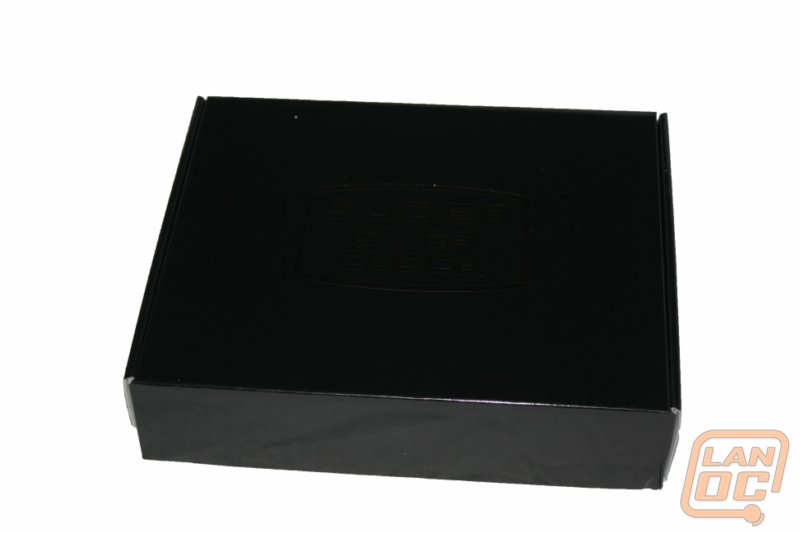 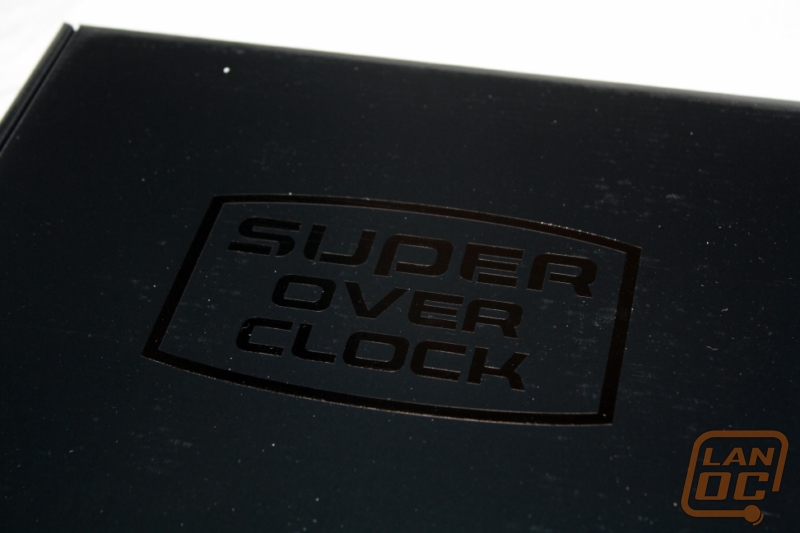 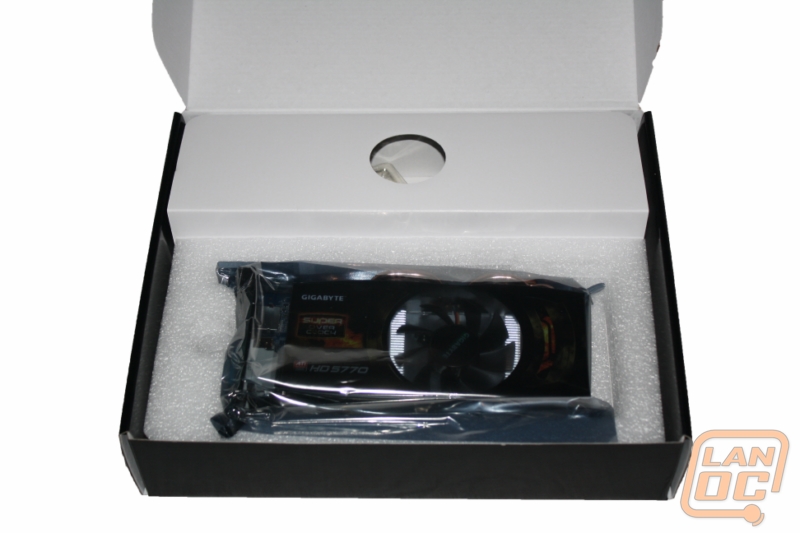 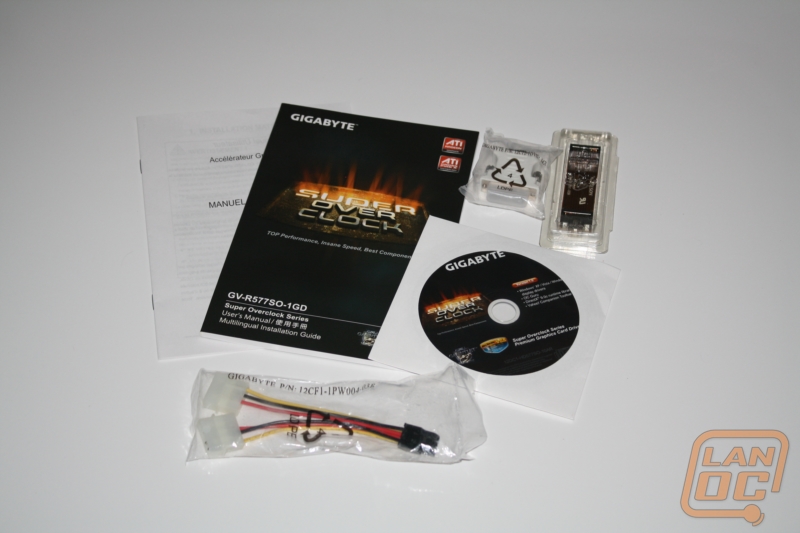 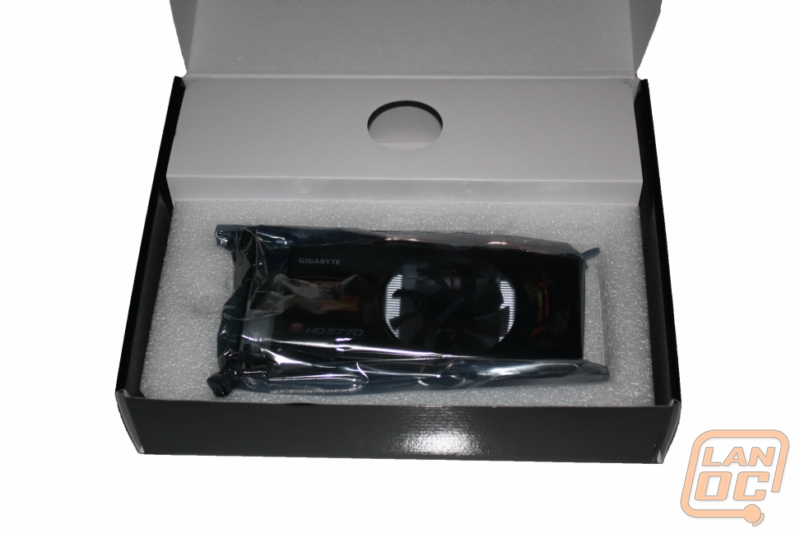 The HD5770 SOC came in a nice black box with a large Super Over Clock logo on the front. Outside of the logo the information on the front is kept to a minimum, but it does include the product name and a small graph on the bottom right corner showing a 13% improvement in their testing. The back of the packaging is the opposite of the front with as much information packed in as possible. They have all of the required logos from ATI (5 of them!) along with more information on the “GPU Gauntlet”. A process where they cherry pick only the best GPU’s for use as a SOC model. Inside the box the card itself is wrapped up in a anti-static bag and secured using cardboard. Under the cardboard they have hidden the instructions, driver disc, crossfire adapter, DVI to VGA adapter, and a Molex to PCI power adapter. 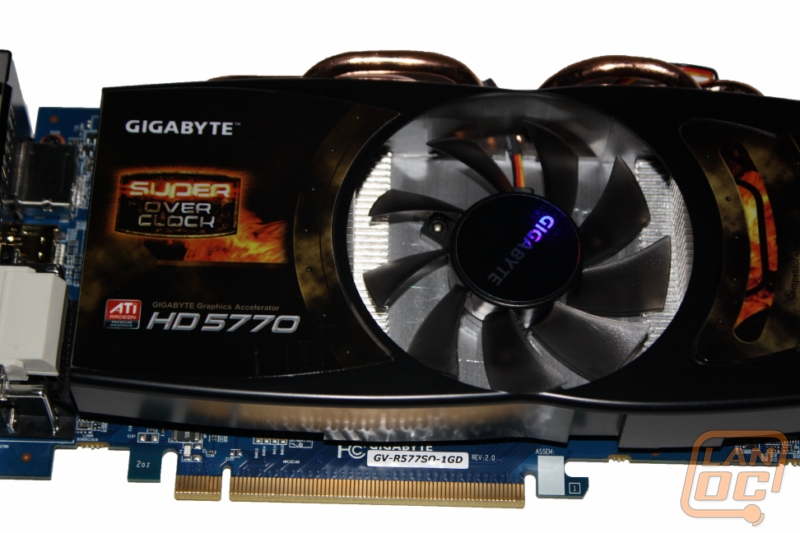 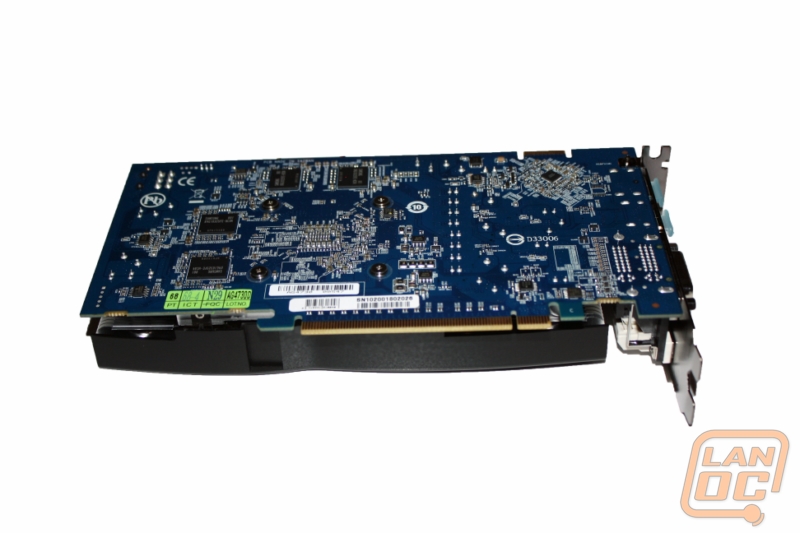 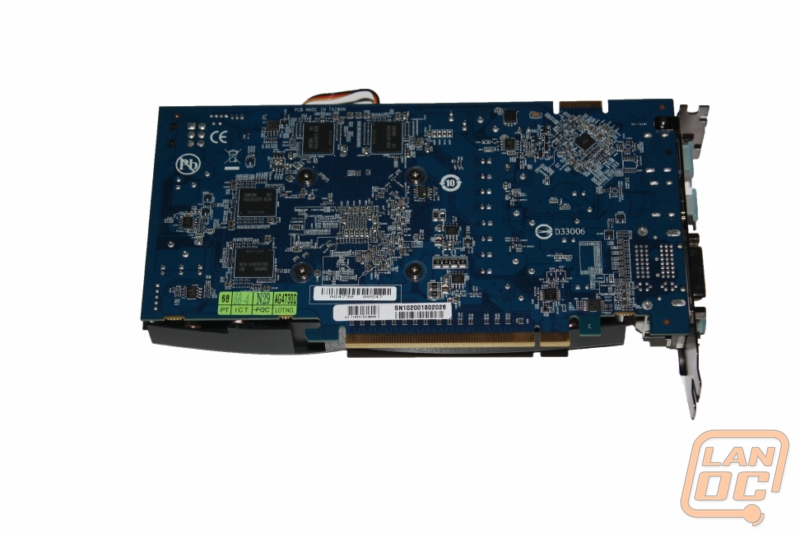 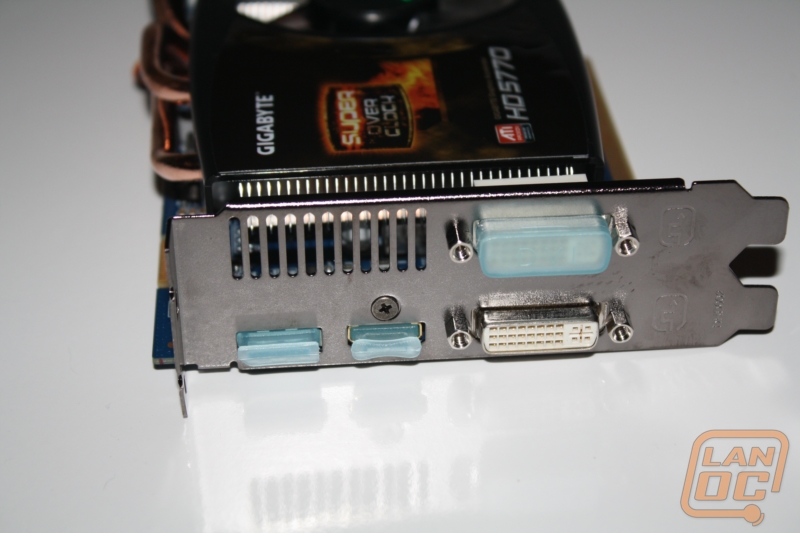 As always to put this card to the test we paired it up with our test bench and ran a few synthetic benchmarks. But to keep things fair we also run a few tests using a couple popular games for more of a real world test. This should give you an idea of what to expect. I have also compared our numbers against other cards we have tested in the past. Here are the results. 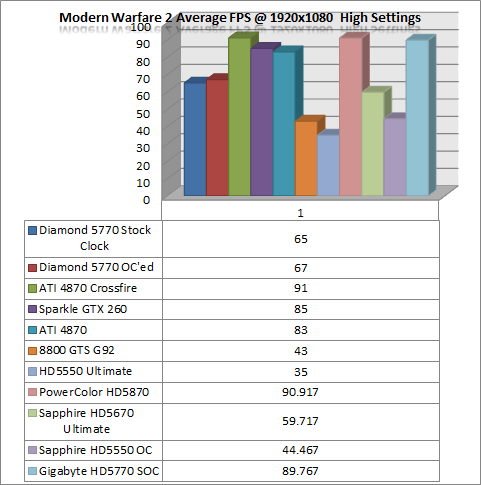 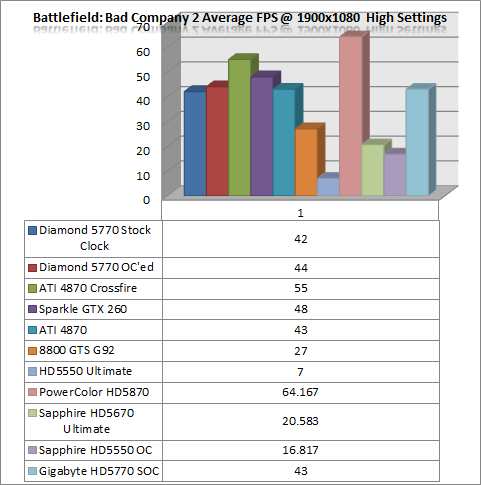 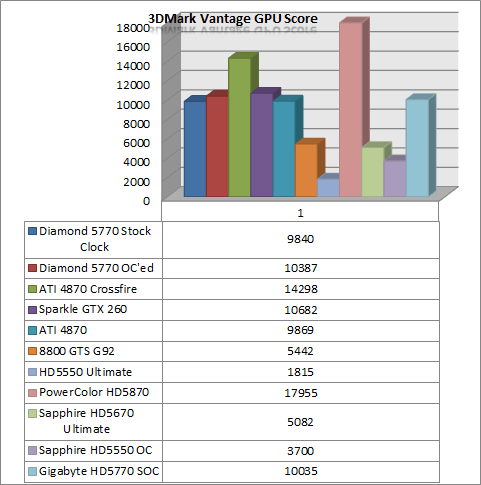 At this level the Modern Warfare 2 numbers don’t really show too much, the game itself is capped at 90/91 FPS. The Battlefield Bad Company 2 testing is a perfect example of the performance you would see running in 1080p with texture settings at their highest. At 43 frames per/sec I would consider turning the textures down just a notch for smooth gameplay, but at 43fps it is still impressive. The 3DMark Vantage number shows even more of an improvement over the stock HD5770. The overclock shows a 195 point improvement in 3DMark Vantage and one frame per second in Battlefield Bad Company 2. 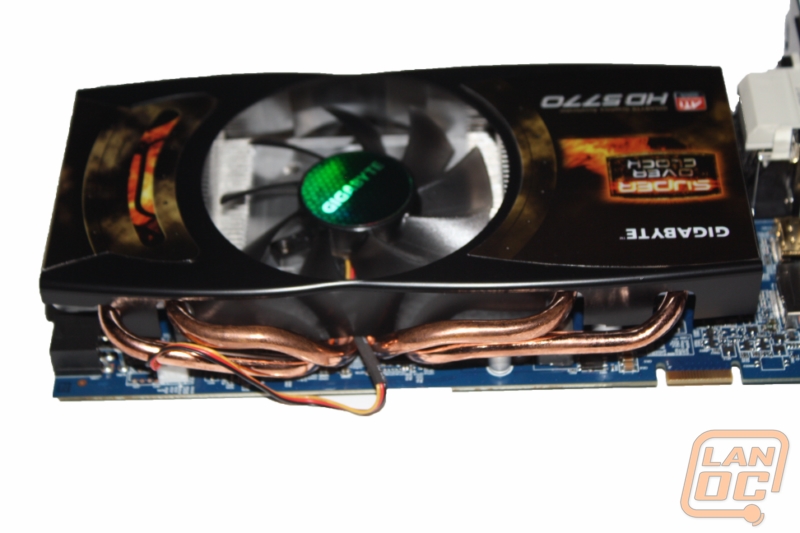 Going into this review I already knew that the HD5770 is a good performing card at a price that is in reach of most people. Gigabyte wasn’t satisfied with that and upgraded the cooling and gave the HD5770 a boost in performance with an overclock. The boost in performance was noticeable in game and through synthetic benchmarks. If I were on the market for a HD5770 there is no doubt Gigabytes Super Over Clock version would be on my radar. This is a major step up from the reference card design that we reviewed last time. I would highly recommend picking up the SOC, you won’t be able to get the same cooling performance out of the reference design without a costly after market cooler. Gigabyte saves you a few bucks and installs it for you! 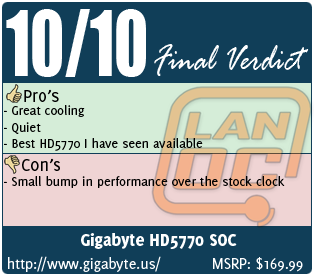 You might call him obsessed or just a hardcore geek. Wes's obsession with gaming hardware and gadgets isn't anything new, he could be found taking things apart even as a child. When not poking around in PC's he can be found playing League of Legends, Awesomenauts, or Civilization 5 or watching a wide variety of TV shows and Movies. A car guy at heart, the same things that draw him into tweaking cars apply when building good looking fast computers. If you are interested in writing for Wes here at LanOC you can reach out to him directly using our contact form.
Discuss this article
Log in to comment
Posts in discussion: Gigabyte HD5770 SOC

We have 1164 guests and one member online