Gaming on the Go: Laptop vs LAN Rig

Being on both the host and attendee side of numerous LAN parties, portability becomes just as important as power. That conundrum, paired with being a full-time student, prompted me to purchase a custom built gaming laptop. My editor, however, took a different route, building a miniature 'LAN rig' the size of a lunchbox. That's when our testing lights flicked on: which is the better solution?

My entry into PC gaming was a laptop, so perhaps I'm somewhat partial to these machines. You can't get any more portable than a notebook, with the screen, keyboard, and mouse attached on a fold. With some models sporting 18.4" for 1080 resolution, quality definition doesn't have to be sacrificed any longer. This is our first perk to using laptops: They are the easiest to take anywhere.

Of course, 'anywhere' can be limited by your battery life, most of which become much shorter when powering higher-end components. Though this can definitely be a setback, compared to the alternative LAN rig which requires a power source at all times, this is somewhat of a perk. Personally, I can barely squeeze an hour out of battery life when playing Modern Warfare 2, so lacking a power source is a common enemy in both situations.

While notebooks are becoming much more affordable, to play a good majority of today's popular titles, a dedicated video card is required, and a good one at that. This brings us to our first issue with the notebook solution: Someday, you're video card is going to be out-of-date. Then you're screwed.

This really speaks to all the components in your laptop, though your video card is most likely the first to bottleneck the system. While the more technically inclined maybe be able to switch the card out successfully, the time, effort, and cost is likely to dissuade the most if not all users from doing so.

On the contrary, a LAN rig solution provides for a much easier upgrade situation. The Shuttle, which Wes built, acts like a much smaller tower, designed to fit in a carrying case that is literally no larger than a lunch box. This means that a simple thumbscrew/shell removal is all that stands between you and your hardware. First LAN rig pro: Easy to install and upgrade hardware components.

Before you spawn doubts, it's size doesn't have to limit the hardware used either. In Wes' Shuttle build, a Radeon 5770 video card was used, which performed extremely well in syncthetic and real-life testing. 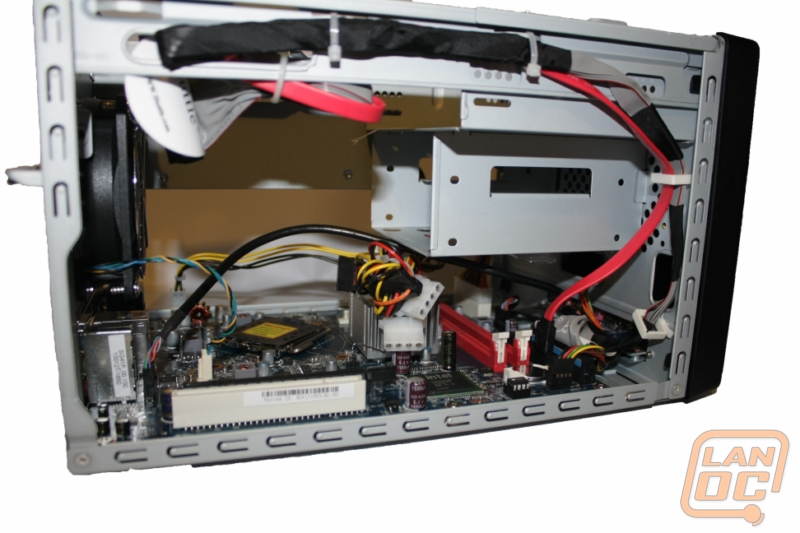 A 'mini tower', isn't anymore than that, however. The first setback of the LAN rig: Monitor, keyboard, and mouse not included. Take this with a grain of salt though; with the exception of the monitor (which build are attachments for the Shuttle are available), many notebook gamers still use a dedicated mouse and keyboard. Some may even view the ability to use any size monitor a plus, despite the requirement to haul it to and from.

Having hosted and traveled to more than a few LANs, we've seen carrying solutions from pillow cases to tote boxes. The right accessory choice can make all the difference. Razer's Gear Rack, an MSRP of $19.99, features five storage components for peripherals, including keyboard, mouse, mousepad, headset, ethernet and power cables. This turns your bundle of accessories into a 10" x 19" mesh briefcase that can be easily carried in the same hand as the LAN rig lunchbox or laptop bag. 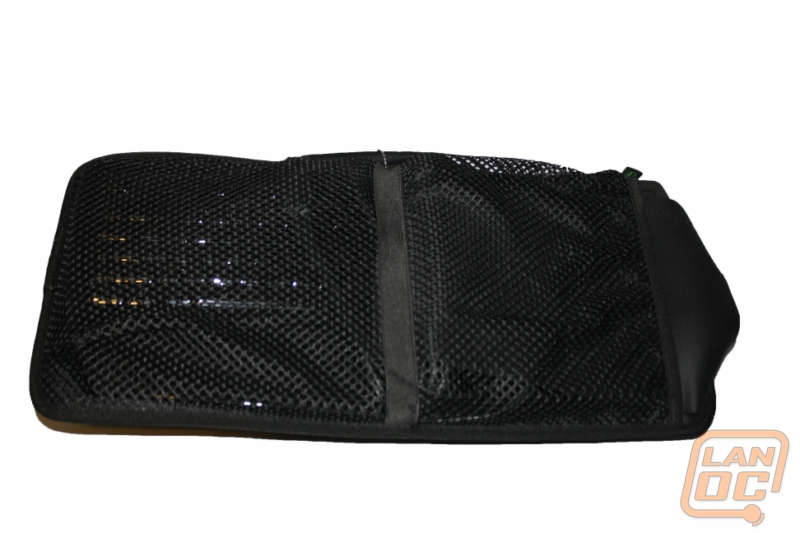 You may find yourself throwing an additional accessory in the car for your laptop as well. When you put high-performing hardware in a compact area and stress them, heat becomes a major threat. In my first year of ownership, the video card installed in my laptop would overheat after as short as ten minutes of gameplay, stalling in-game. A few send-backs and some choice cooling stands later, the problem is much less likely to occur. This con for laptops hints at a few areas: Heat issues must be dealt with externally. And as you can see from my situation, if you run into an internal problem, there isn't a lot you can do. This also creates one more thing to carry and set-up, though it does help with comfortability and often expands USB ports. One of the simplest and affordable options, the Choiix Comforter Lapdesk. 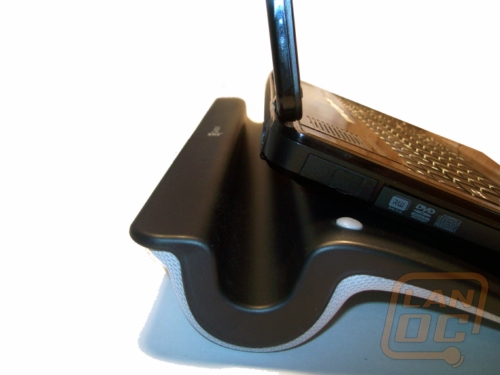 So what about that actual set-up process? Does the LAN rig stand a chance against the ultra-portability notebooks are designed for? We simulated a LAN situation and timed how long it took to completely set up each system. The LAN rig took a little over three minutes to complete, while the laptop took only just over one minute. Not much of difference in relativity, and especially when you compared to larger-scale towers. Both set-ups are easy and quick to assemble; I'm going to have to give this pro to each one.

Of course, depending the peripherals used, you can hurt or aid in this set-up time. Many of the products we've reviewed this following week were used during in the real-life test, since they are designed to be portable, compact, and generally easy to use. The Razer Orochi, for instance, is small enough to fit in a pocket (comfortablly is up to you) and connects via BlueTooth, a USB receiver of which can be picked up cheap. Eliminating a cord may seem trivial, but as you can see my graceful self struggling with the montage of cables on both set-ups. Since it's from a professional gaming peripheral manufactuer, you won't see features such as side buttons sacrificed to make it smaller, either. 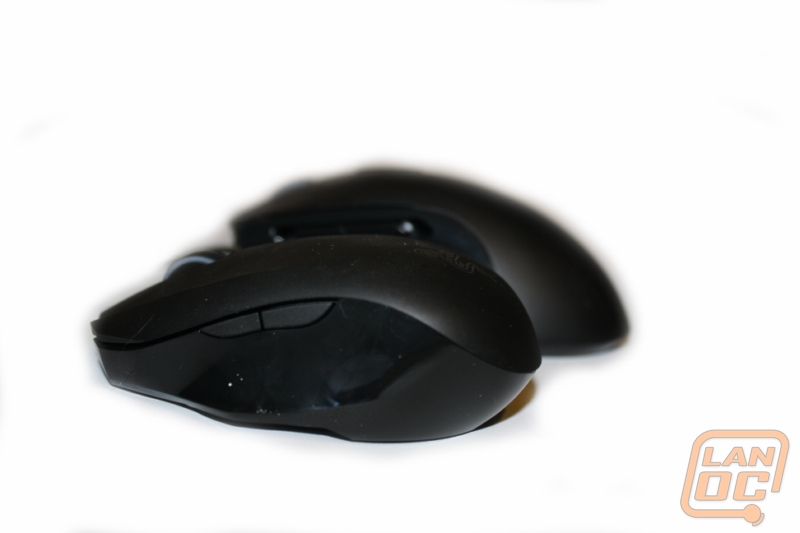 Let's take a quick step back to performance. Without diving into numbers too much, since a comporable test would include two systems with similar dated components (and arguably a plus to the LAN rig is being able to change them on a whim), both have the capability to play just about whatever you can throw it them. Price is another matter. Con number three for notebooks:  you can't build them yourself. And the company that does is going to take their cut. My laptop, an iBuyPower Battalion series, cost around $1533.00. The barebone of a LAN box, which in Shuttle's case includes the box, power supply, motherboard, processor, and cooling, costs only $177.99, leaving plenty of room for high-end video card to power your games. LAN rig pro number two: DIY, and DICheap.

Let's take a look at the results.

Just because one has more pro's vs. con's doesn't mean it's a winner. In the end, it all comes down to preference. For some, never having to worry about a monitor is a blessing; for others, the thought of using anything less than twenty inches is out of the question. Me? Perhaps its the techie in my personality, but I like the idea of having something I can work on and upgrade. But then again, the grass is always greener, right? My editor? He's looking to buy a gaming laptop. Irony!

Author: Lersar
Contributing Editor / Event Staff
Adam is a big proponent of LAN parties, esports and speed-running, and helps organize our semi-annual LAN events. He has covered hardware and software reviews of a wide variety, but most content these days come from event coverage, such as other LAN parties.
Discuss this article
Log in to comment
Posts in discussion: Gaming on the Go: Laptop vs LAN Rig

We have 1225 guests and no members online