In the ram market there isn't any one manufacture who is top dog, but there are a few that stand out. One of the few manufactures that targets enthusiasts and benchmarkers is OCZ. They entered the memory market in August of 2000 hoping to make the best high performance memory; over nine years later they have grown to be one of the most successful enthusiast ram manufactures on the market. Recently they have been known for their SSD's but their memory is what started it all. Today I have the chance to take a look at one of their 1600Mhz Triple channel kits for the i7 platform. Read on to see how it performed. 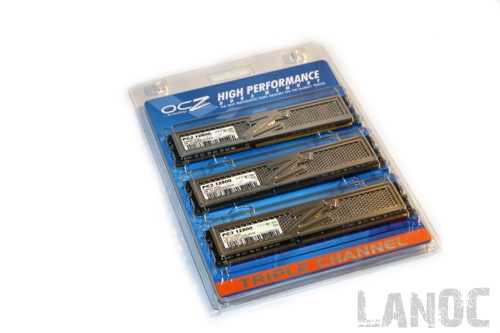 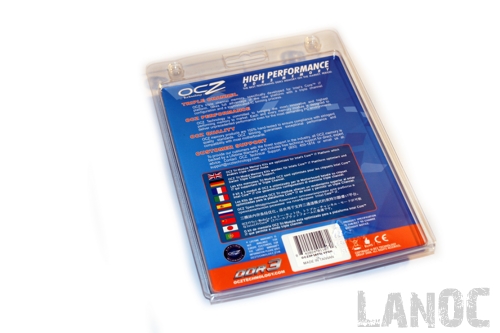 Packed up in your typical clear plastic clamshell the Platinum heatspreaders really catch your attention. Behind the triple channel kit a blue and orange background really pops. On the back you can find information about the lifetime warranty that is included with the kit. In case you have any problems, they have included both an email and phone number to call and talk to OCZ Technical Support. Overall, there is no way you're going to miss this package on the shelf. 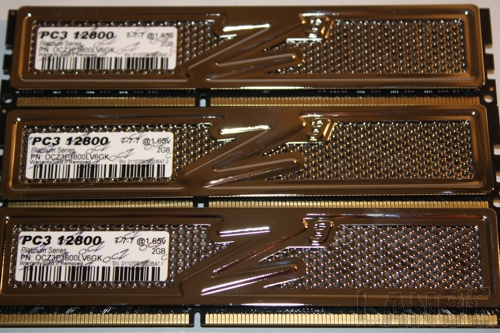 To get a good idea of the performance of the Platinum Triple channel OCZ kit, I used our i7 test rig and ran our tests using Passmark performance test 7.0. I put the OCZ kit up against the Crucial Ballistix Tracer ram we tested a while back. Here are the results. 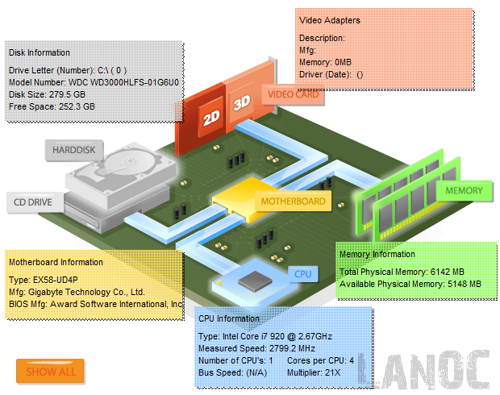 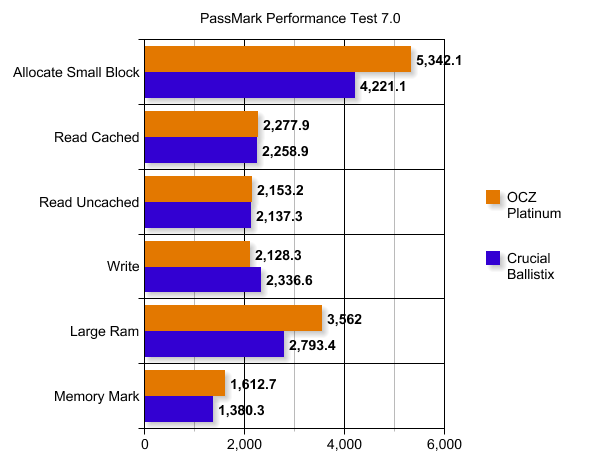 As you can see, the results are all over the place depending on the test. The overall memory score for the OCZ Platinum was much higher than the Crucial ram. This is due to very high scores in both Small Block and Large Ram tests. The Crucial's Write speed was actually faster than the OCZ ram. Overall the OCZ ram kicked butt, as shown with a 232.4 point higher overall score than the Ballistix Tracers. 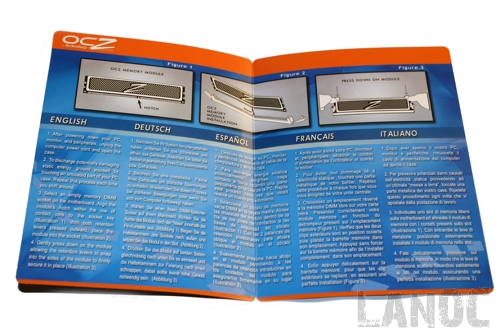 I didn't talk much about OCZ's Platinum heat spreaders, but they are very sharp looking. They don't have large heatsinks coming off of them or flashing LED lights, but they are one of the better looking heatspreaders on the market. On top of that the OCZ Platinum 1600Mhz Triple channel Kit kicked the similarly spec'd Crucial ram's butt.  When you figure in the great deals you can find on this ram (most of the time it's one of the cheapest kits available) compared to the higher priced Crucial ram this really becomes a performance value. 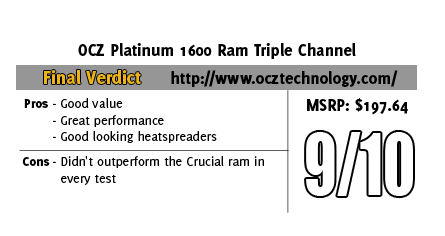 You might call him obsessed or just a hardcore geek. Wes's obsession with gaming hardware and gadgets isn't anything new, he could be found taking things apart even as a child. When not poking around in PC's he can be found playing League of Legends, Awesomenauts, or Civilization 5 or watching a wide variety of TV shows and Movies. A car guy at heart, the same things that draw him into tweaking cars apply when building good looking fast computers. If you are interested in writing for Wes here at LanOC you can reach out to him directly using our contact form.
Discuss this article
Log in to comment
Posts in discussion: OCZ Platinum 1600Mhz Ram Triple Channel

We have 1161 guests and no members online