Six years have passed since Jonathan 'Fatal1ty' Wendel met with the minds of Abit Corporation to design a motherboard optimized for PC gaming enthusiasts. That board not only met expectations, but also excelled by including many of the features that gamers sought as standard. Just last month, an announcement of a new partnership between Fatal1ty and ASRock was unveiled, birthing a modern version of the gamer's board. A lot has changed since 2004, and today we put it to the test of next-generation gaming.


Packaging
About the only thing you'll take away from a first glance at P67's container is that Fatal1ty, indeed, had a hand in its creation (or at least in the art design). They have included a nice feature popular among other gaming hardware, a windowed-style packaging allowing a direct view of the board itself. Opening the door on the front of the box will reveal this along with feature callouts and a brief story of the professional gamer's rise to fame. 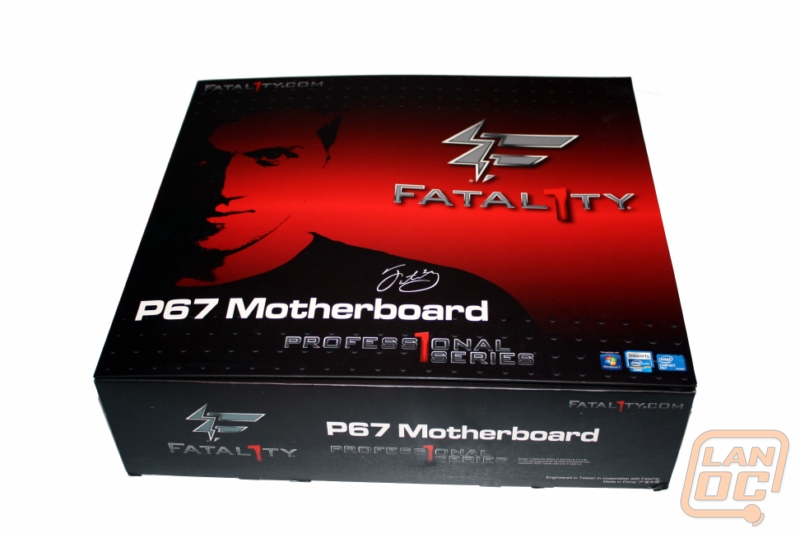 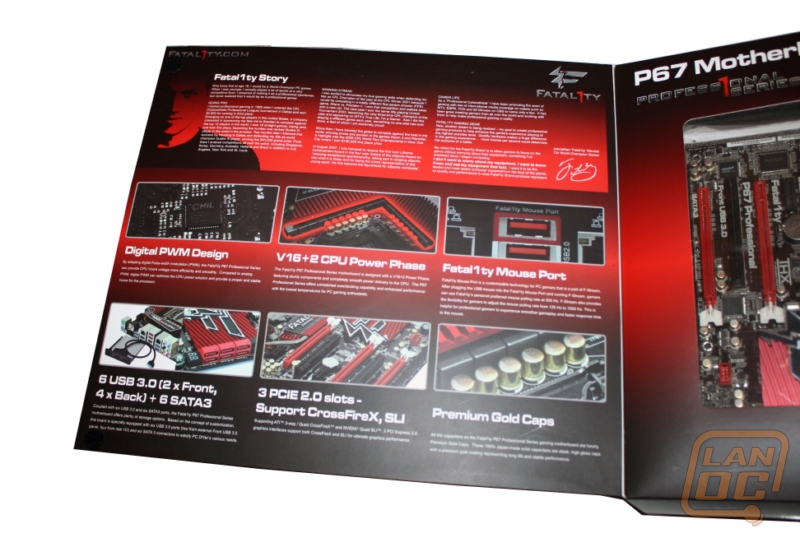 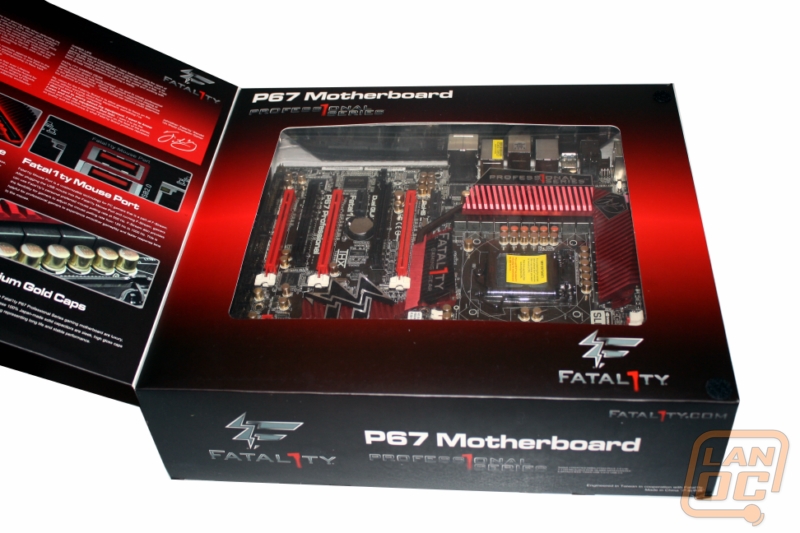 The exterior cover turns out to be a sleeve that slides away leaving a briefcase box that breaks down to two inside: one containing the board, and the other housing the many accessories. With the P67 you will also receive two IDE cables, six SATA cables, two SATA 4-pin Molex power adapters, an SLI bridge, I/O panel cover, USB 3.0 panel adapter and slot cover, and some screws for installation. 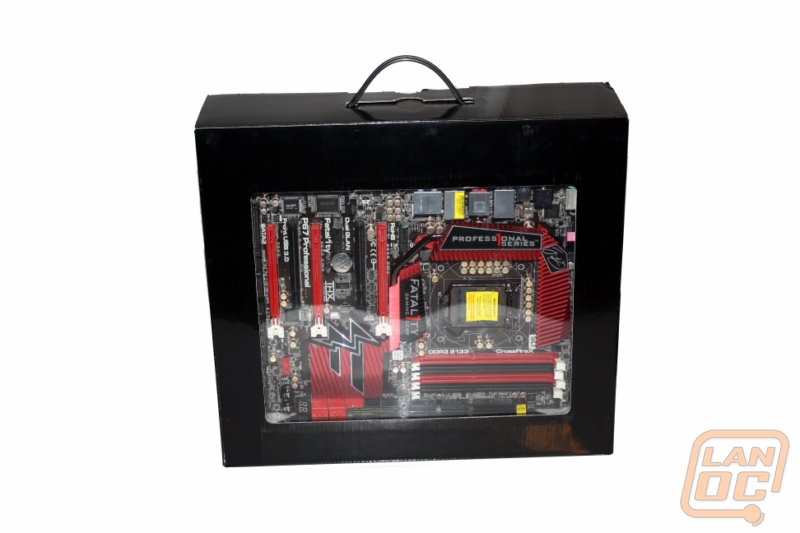 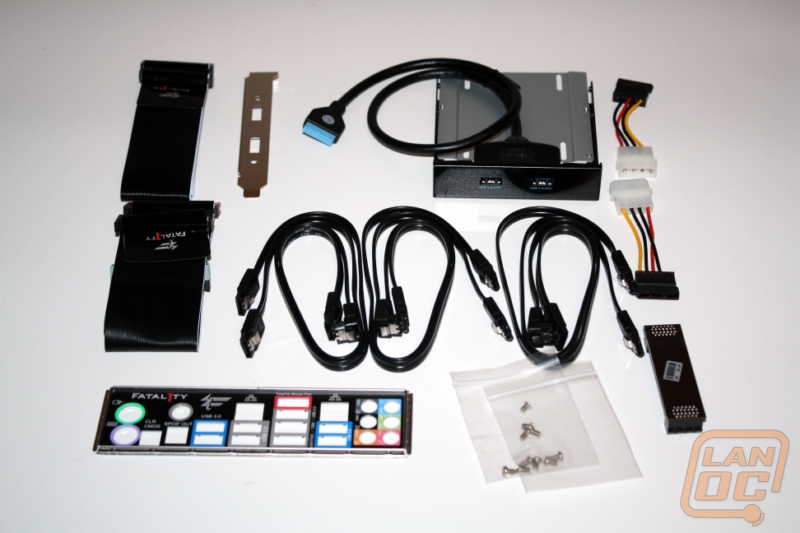 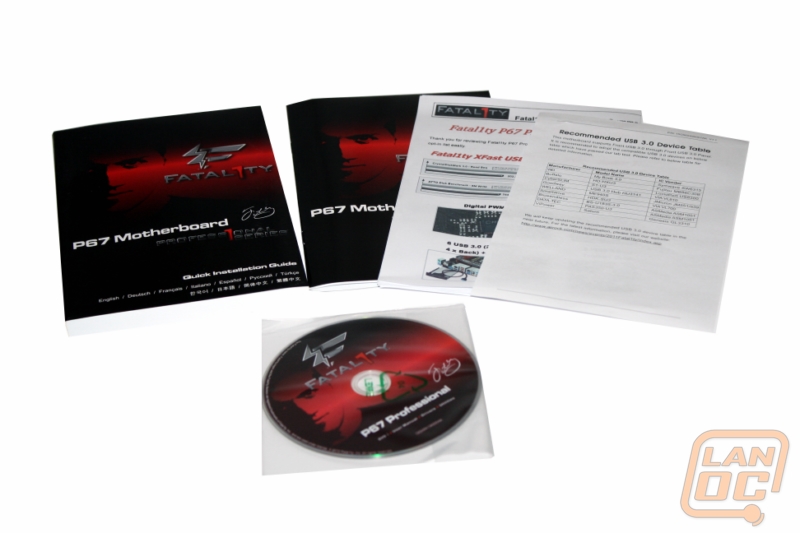 Board Layout
The P67 Profess1onal comes with three PCI Express x16 slots, supporting up to 3-Way SLI and CrossFireX. The PCI-E slots have been laid out in somewhat of a unique fashion, with a PCI Express x1 available even when using all three x16. Not only does this provide some nice spacing between video cards, but it also allows for some extra expansion in a notoriously cramped area. Two PCI slots are also an option, though using the PCI-E x16 slot above either will block them. 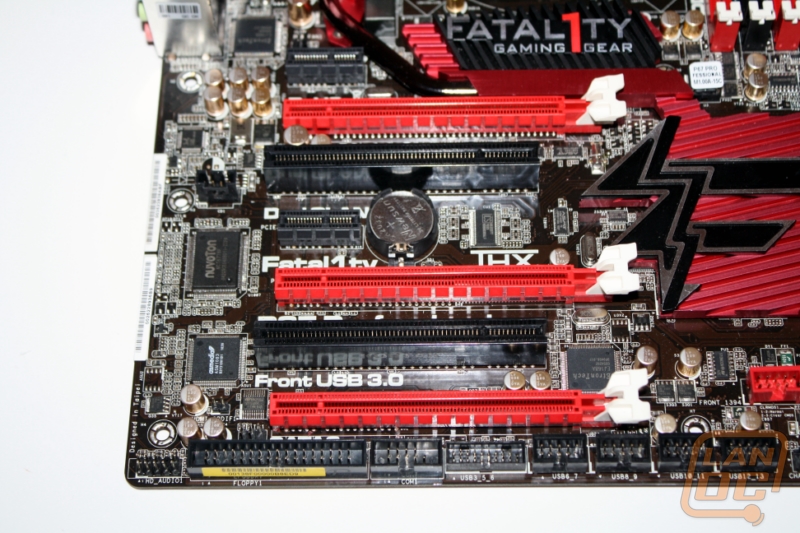 The board also has a nice run of input headers on the bottom edge for audio, floppy, USB, and so on, as opposed to having them scattered about. This makes finding the headers a cinch and will also make your cable management experience quite a bit easier. 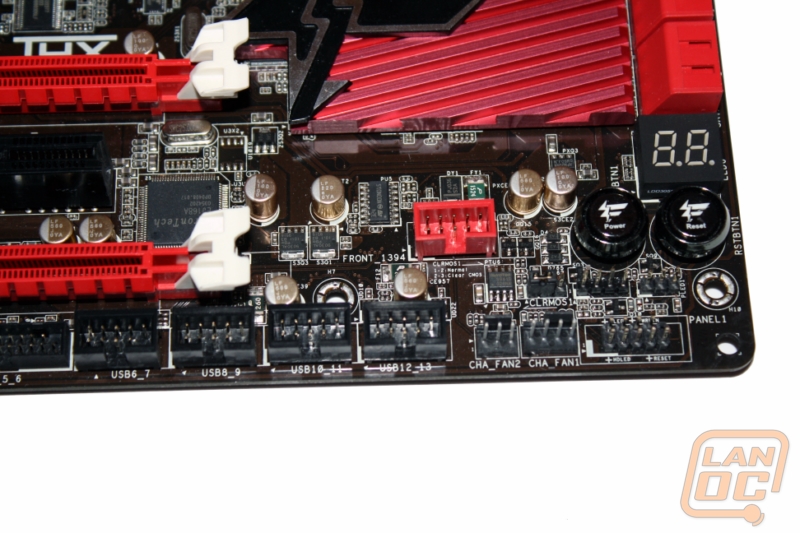 Also included underneath the LED diagnosis panel are two nice power and reset buttons for easy access in testing or troubleshooting scenarios.

The P67 offers a total of ten SATA connections, six SATA3 and four SATA2 ports, which obviously supports the upcoming generation of drives as well as plenty of room to expand. 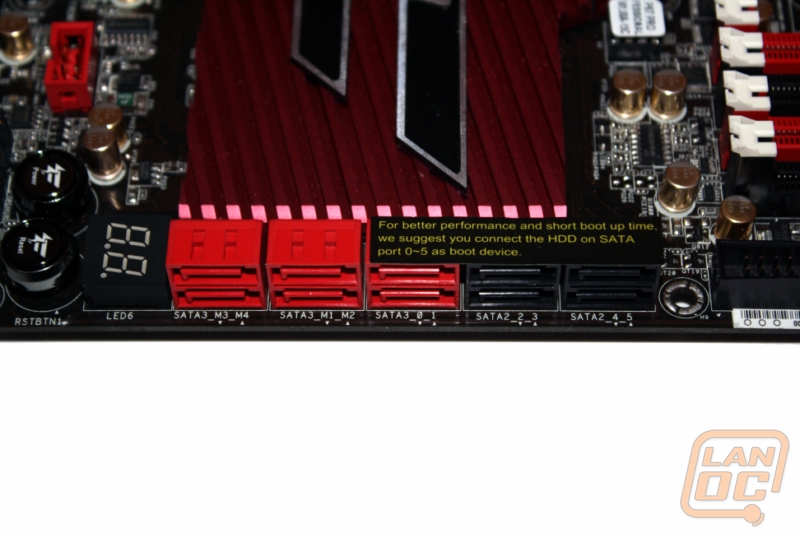 Memory is tackled with four DDR3 DIMM slots with dual channel technology and supporting higher MHz rating associated with overclocking. Speaking of which, the Profess1onal board is equipped with a V16+2 phase running in an 'L' shaped along the socket, which provides stability during overclock. 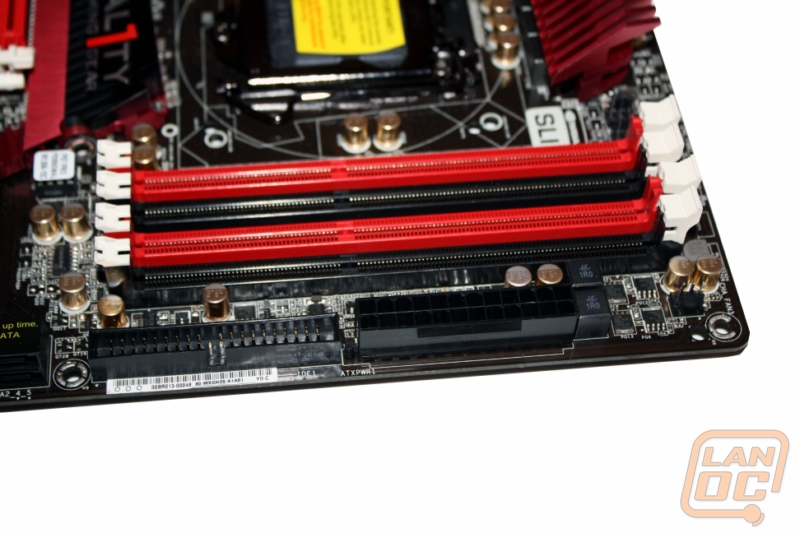 The rear I/O panel consists of PS2 keyboard and mice inputs, for those faithful gamers still using the same equipment from '99. High definition audio output is also offered, an important feature to professional gamers, according to Fatal1ty. In addition to the next-gen SATA, four USB 3.0 slots are included on the back panel in addition to the front panel adapter that will create two more for the front of your case. Four USB 2.0 ports can also be found, as well as a clear CMOS button for easy reset. Finally, the P67 pays tribute to the LAN gamer with two gigabit Ethernet ports that allow for both to act as one single connection. 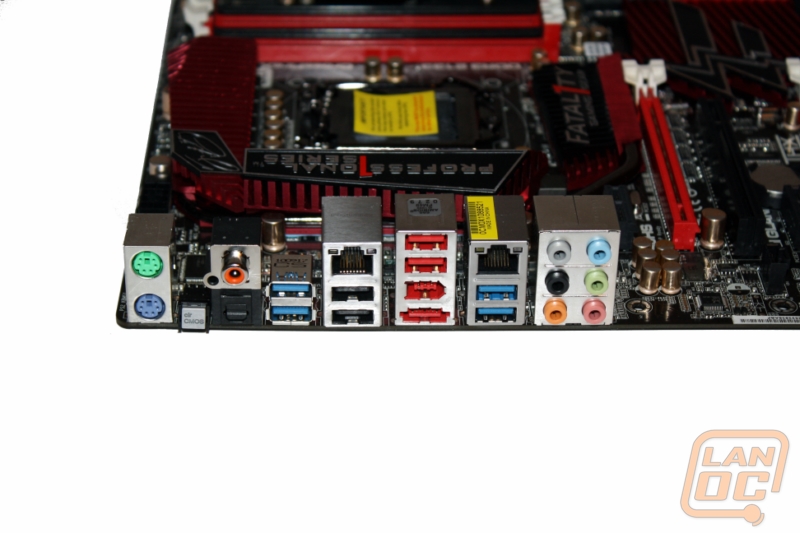 BIOS
The P67 Profess1onal takes advantage of UEFI technology, the same that drives the MSI Click BIOS system. This means that along with seeing the face of Jonathan Wendell on each screen, you'll also be able to use your mouse to navigate and select options. You'll notice the use of buttons to switch between categories, as opposed to the traditional tabs and arrow key method.

The main screen will give you a summary of your system, from UEFI version to speeds and memory totals. The next category allows users to 'tweak' an overclock, the majority of the actual voltage controls occupying the latter half of the menus. The UEFI utility also allows for component configuration and an instant update flash option.

The Hardware monitor holds Vcore values to be tweaked, as well as a read out of processor and motherboard temperatures, and corresponding fans and speeds if you find the need to up RPM. Boot orders and security options round out Fatal1ty's setup utility.

Cooling
Though the P67 boards in general are moving towards the trend of leaving the Northbridge heatsink, Fatal1ty has opted for a low-profile design boasting the logo of the gaming gear, accompanied with its fellow heatsinks to achieve a nice overall appearance that earns that windowed packaging. 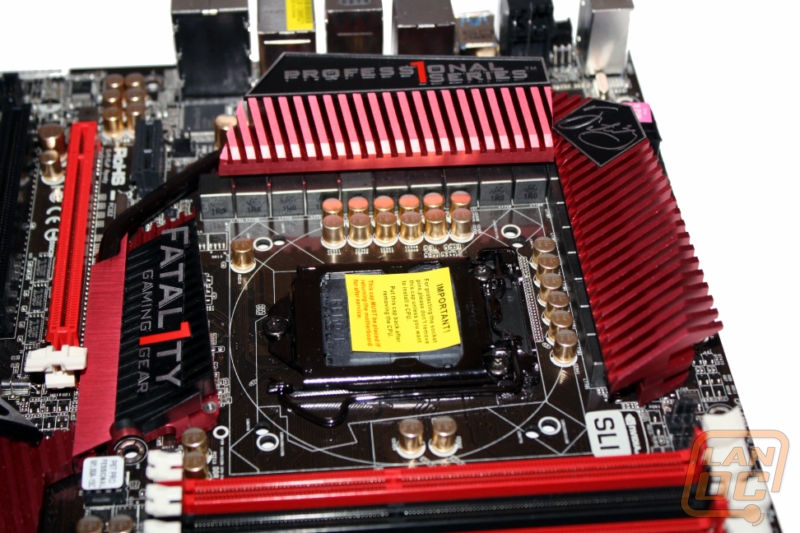 Performance
There are a lot of features outside of direct number results that speak to the quality of the Fatal1ty P67. First is the appearance, which is often a common interest of gamers. The previous board from Abit tried to achieve that enthusiast look by including component fans and LED lighting built-in to the backside of the board. The P67 approaches its looks in a more subtle manner, sticking with a very consistent black/red color scheme and some nice logo badges that even non-Fatal1ty hard cores will enjoy. That theme is only reinforced with the inclusion of all black cables that will ensure a great appearance for any build. The board itself is simply great to look at. 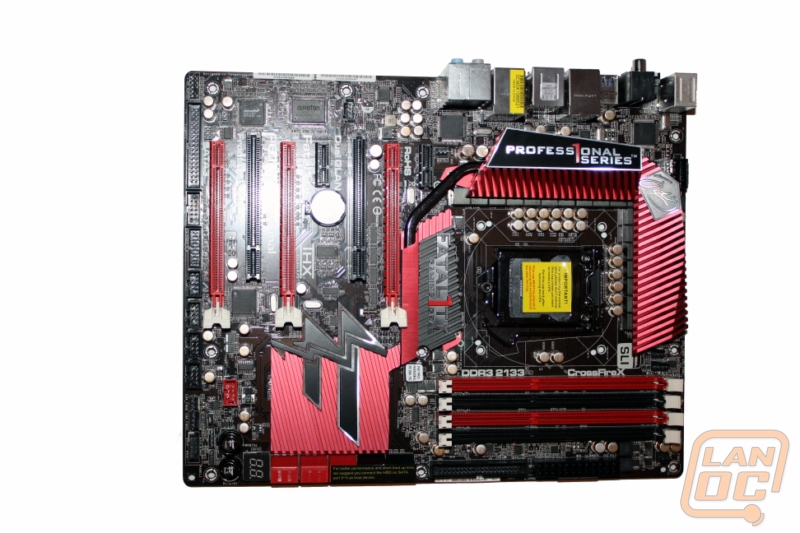 The P67 includes a few features that really appeal to the gaming crowd, and truly computer enthusiasts in general. The first is the mouse port, with its ability tweak the polling rate of mice from 125 to 1000 Hz using the F-Stream utility. The polling rate, simply put, is how often the mouse sends information to the computer. Being able to set this rate higher than the average 125 Hz allows for a sense of control and precision that many hard core gamers demand.

Also boasted is the XFast USB technology, which is nothing more than the marketing name for the use of the Etron USB 3.0 chipset. Standing against the competing NEC chipset, the Fatal1ty P67 is advertised to see read and write speeds at least 30% faster. Of course, we wanted to test this ourselves, but unfortunately could only find several USB 2.0 externals laying around. Regardless, we decided to give it a run and did find a small increase of about 10Mbps or so.

I've mentioned it a few times before, but I wanted to go a bit more in depth with it here. Included with the P67 is a USB 3.0 front panel adapter, which will create two USB 3.0 ports from a 3.5" expansion bay. The adapter also serves a dual-purpose of a 2.5" drive tray, allowing a hard drive or SSD to be mounted with it internally. 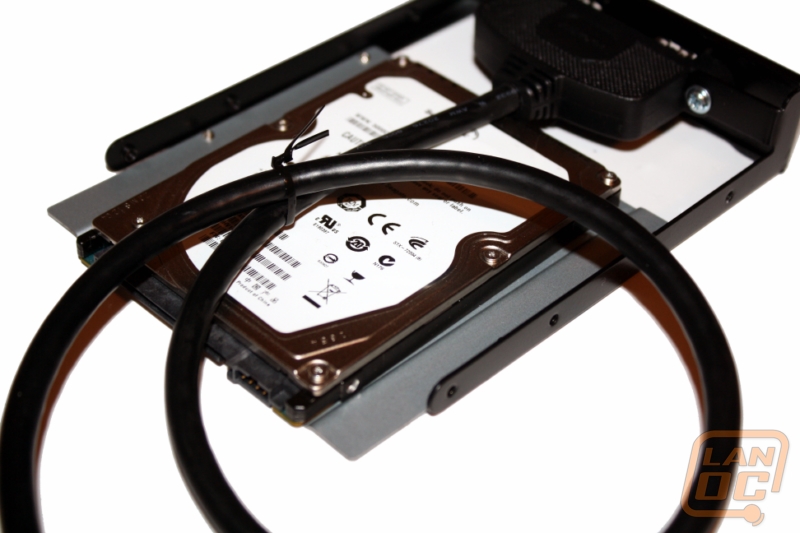 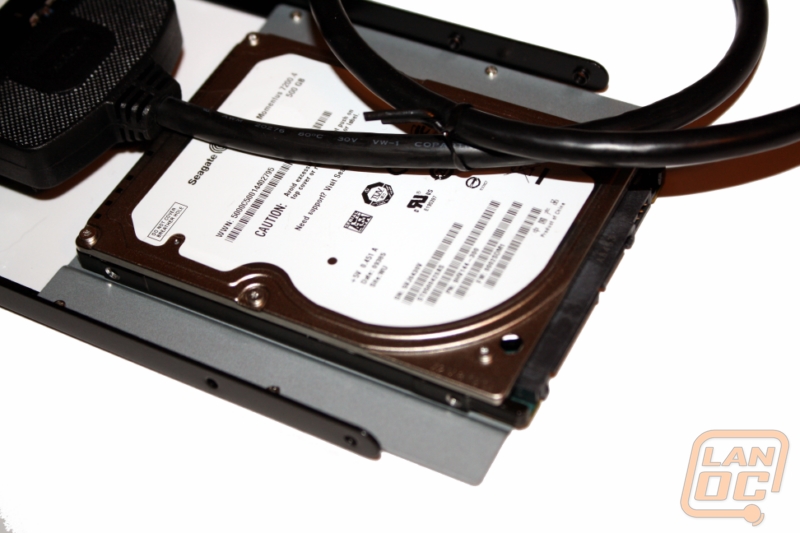 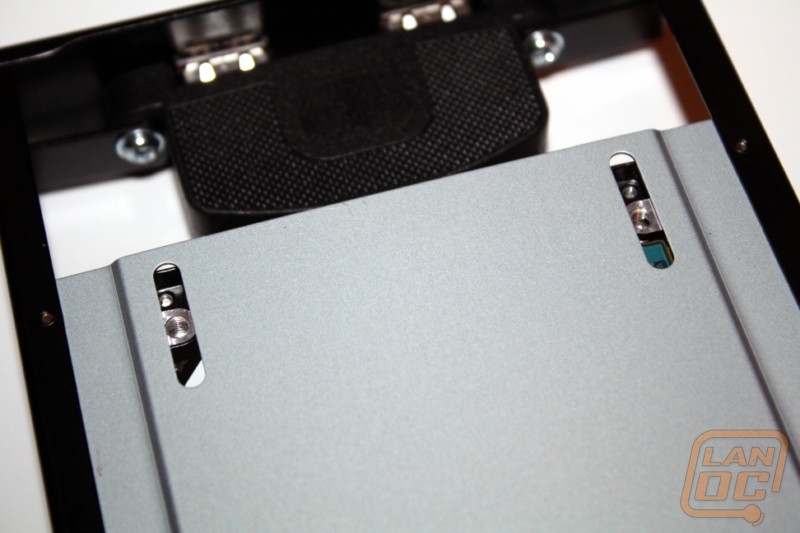 Though the end results of the board are going to rely heavily on the hardware it works with, we put the P67 through our usual test system, a combination of synthetic and the especially appropriate real in-game benchmarks. For a wider performance coverage, we have included results using both the Sapphire HD6970 and the Nvidia GTX 580 in SLI (with the exception of 3DMark 11 for the GTX 580, since SLI is not supported). 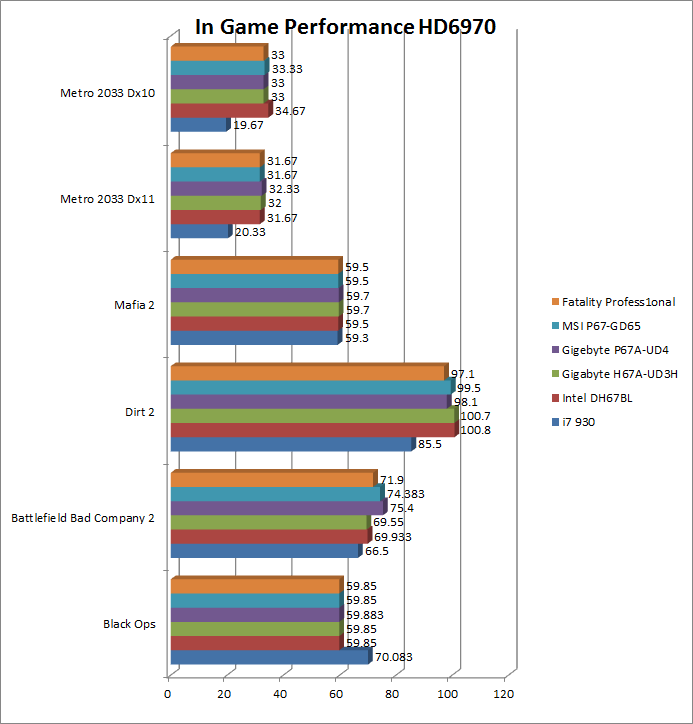 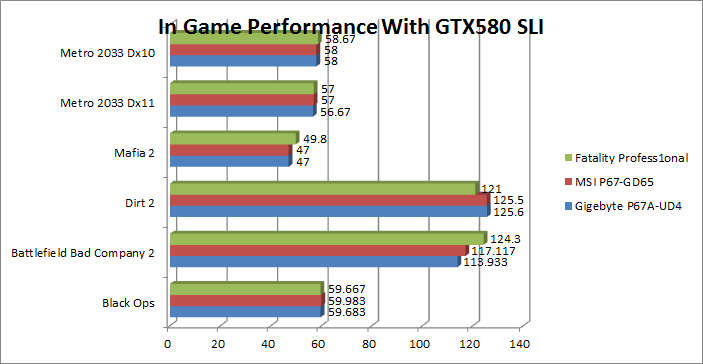 On the AMD spectrum, the Fatal1ty board was close to on par with the other socket 1155 boards we've tested, but wasn't a leader in any title. Regardless, the board helped bring in frames-per-second second only to the Gigabyte model in the extremely taxing Metro 2033 benchmark, and held its own against in the popular war FPS titles Black Ops and Bad Company 2. The P67 Profess1onal truly shined, however, when equipped with SLI, leading three of the benchmarks including Metro 2033, and outperforming all models in Bad Company 2 by nearly seven frames. Interestingly, this P67 lacked in performance in our DiRT 2 test. 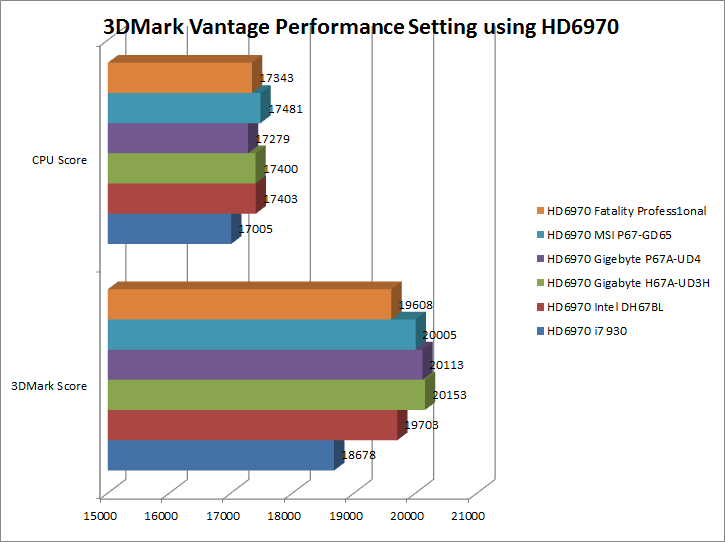 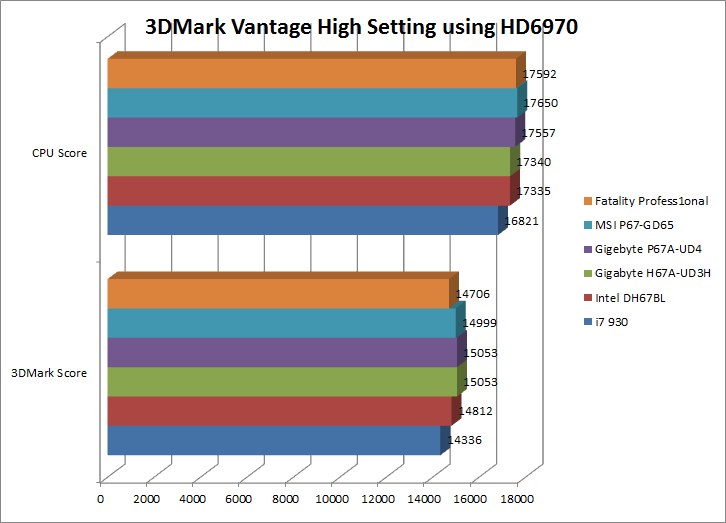 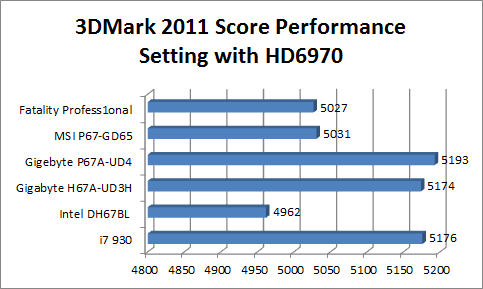 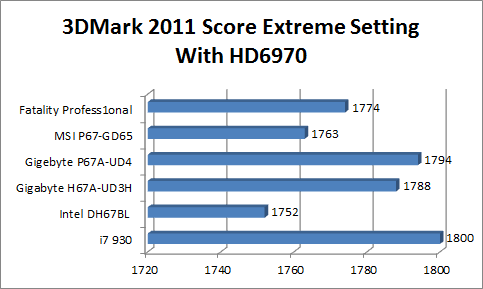 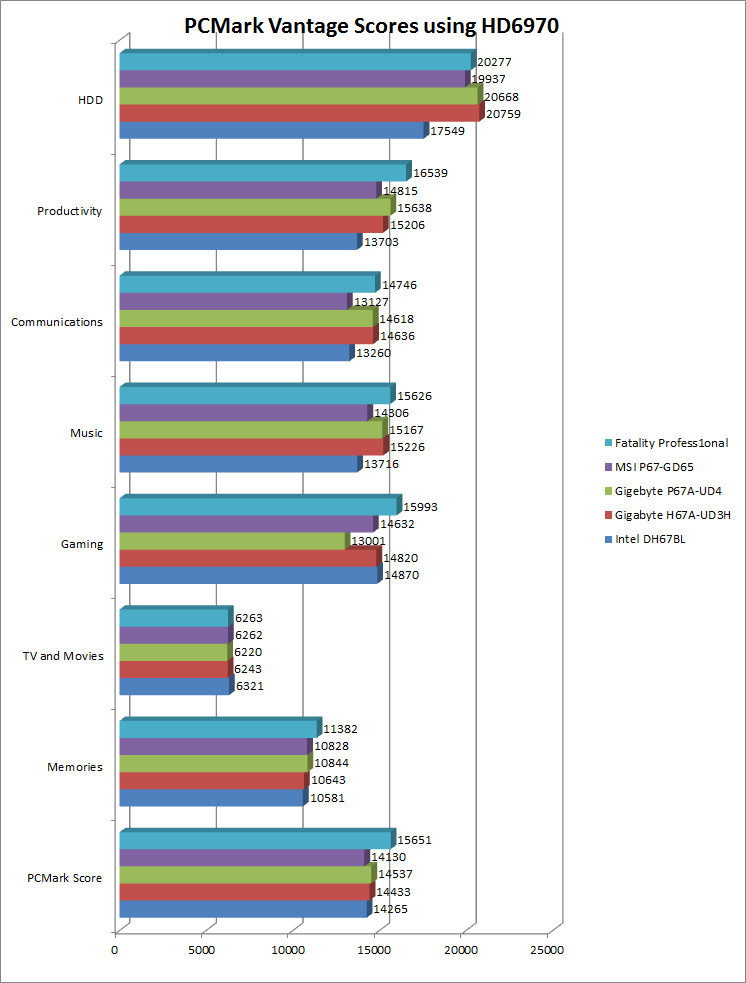 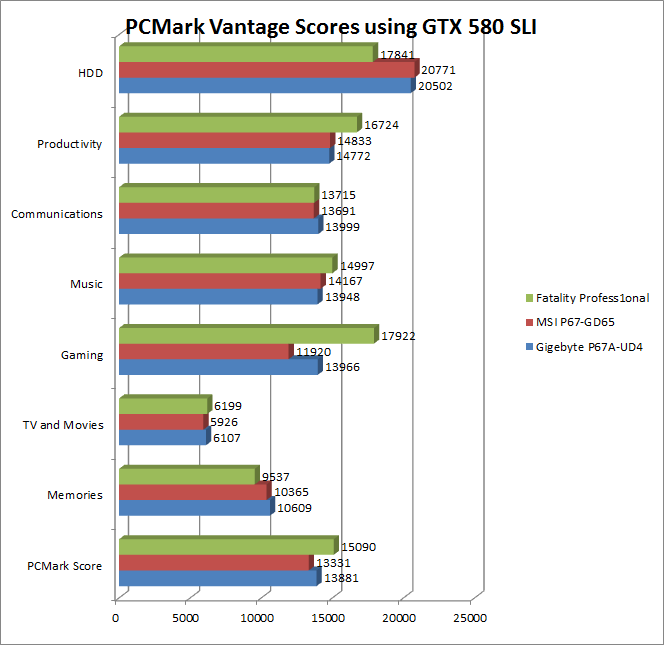 3DMark and PCMark give us a more in-depth representation of the components as a whole, including the CPU performance which is a critical comparison between whats available when choosing what path to take the new socket. The Fatal1ty board continues to excel when tested in the SLI set-up when the CPU score is taken into consideration, leading by nearly 1000 points. PCMark revealed a few areas in which the the P67 Profess1onal such as HDD, but in everything else it excelled.

Overall
Fatal1ty Co. aimed to create a niche in the gaming market with a board designed specifically for gamers. Just as before, they have achieved a great creation of attractiveness, functionality, and performance. The board has a consistent red-black color scheme that will look good in any windowed case (especially those with a painted interior), several features such as polling rate tweaking, clickable BIOS, and USB boost that appeal directly towards the gaming crowd, and numbers that show not only support for today's games but a good investment as the industry grows. 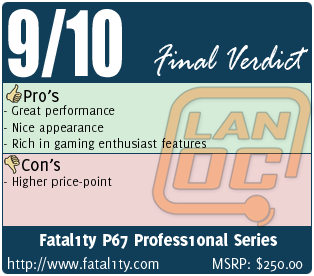 You might call him obsessed or just a hardcore geek. Wes's obsession with gaming hardware and gadgets isn't anything new, he could be found taking things apart even as a child. When not poking around in PC's he can be found playing League of Legends, Awesomenauts, or Civilization 5 or watching a wide variety of TV shows and Movies. A car guy at heart, the same things that draw him into tweaking cars apply when building good looking fast computers. If you are interested in writing for Wes here at LanOC you can reach out to him directly using our contact form.
Discuss this article
Log in to comment
Posts in discussion: FATAL1TY P67 Profess1onal Series