Fresh out of the testing for the CM Storm Inferno, Senior Editor Wes was enlightened to the need of a cooling solution for his newly purchased 18.4" gaming laptop. His plight isn't an uncommon one: gaming notebook users often find standard coolers insufficient, especially for widescreen models. When we heard the Storm line was introducing a laptop cooler designed to fill that very void, Wes jumped at the opportunity. You may ask yourself why he isn't writing this article; he's too busy playing an uninterrupted game of Civilization V. Thanks Cooler Master!

Packaging
If first impressions are any indicator of quality, the SF-19 is setting up some pretty high expectations. The box is huge, of course, given the giant cooler inside. The better half of the front is occupied by an action shot of the Strike Force 19. The color scheme is consistent to the Storm brand, a sleek red and black. Cooler Master hasn't abandoned the staple carrying handle made popular through to NotePal line, either. 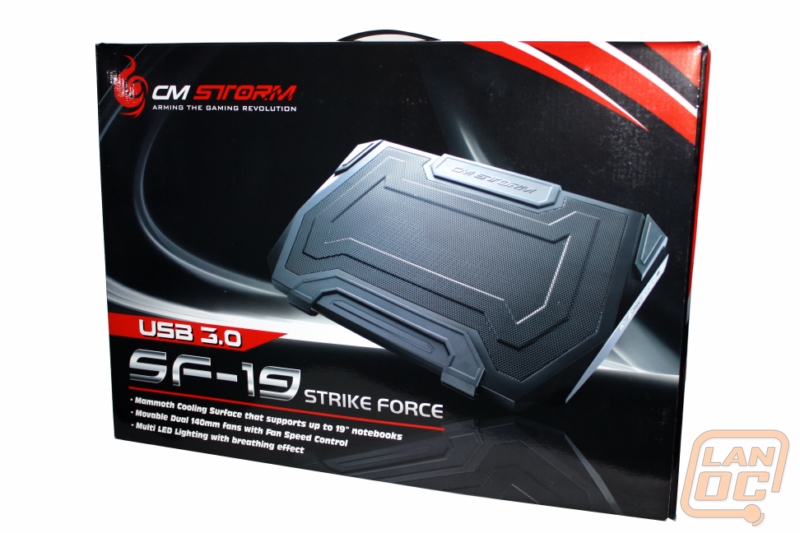 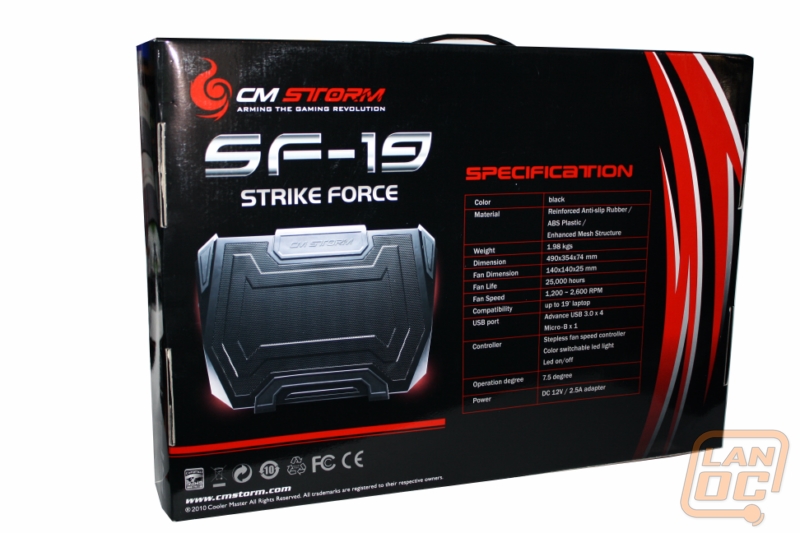 Door-and-window packaging is essentially a requirement these days for gaming mice, but the design doesn't have to be restricted to peripherals. Cooler Master has incorporated the idea nicely with the SF-19, unfolding the first door to reveal a large, call-out display of features and a window allowing a preview of the actual product. Unfold the new lid once more to reveal the direct access to the Strike Force 19, protected with foam placeholders on either side of the cooler. 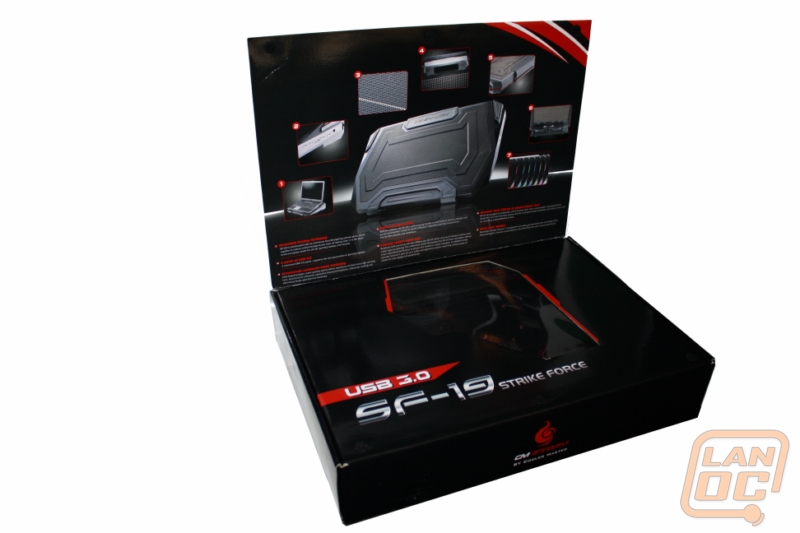 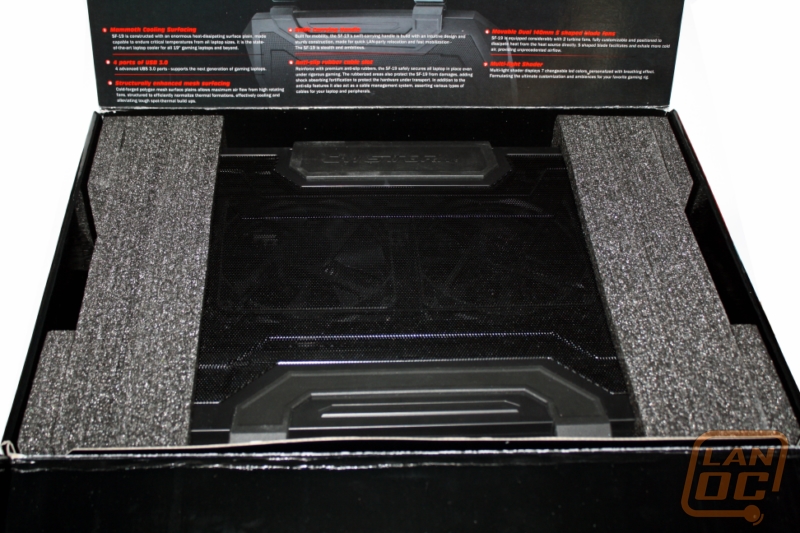 Included in the packaging is a DC wall power adapter, as well as a USB 3.0 connection cable. 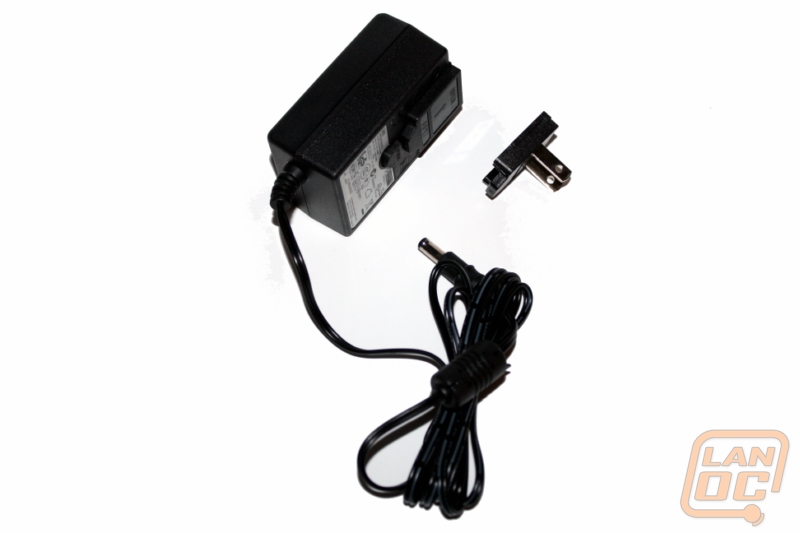 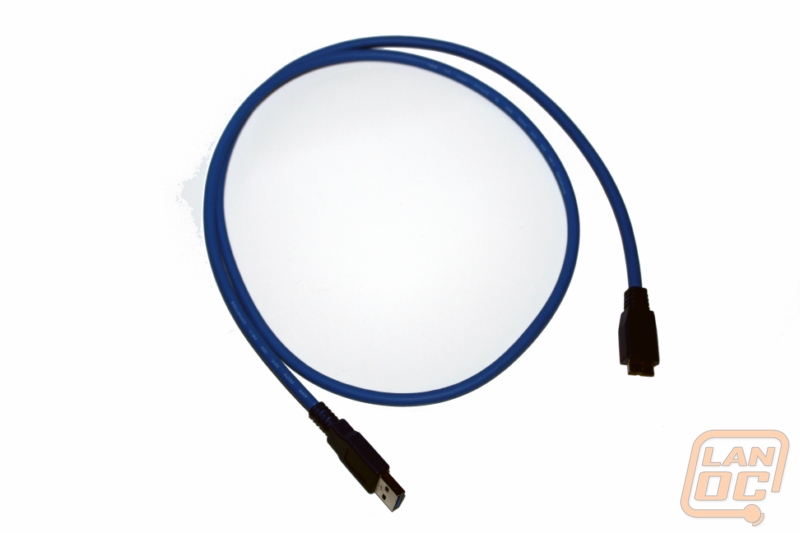 Set-Up
There is a little more involved to preparing the SF-19 than you may think. Flipping the cooler over, you'll notice latches that release a door on the bottom side. This allows the user to directly remove the fan unit, which is also customizable. The included 140mm fans can be moved using a system adopted from the U2/U3 models. Though these larger fans don't have a lot of room to move, they can be swapped out for 120mm models. The fans are also connected by a removable 3-pin power interface as opposed to being hardwired, which not only allows the fans to be completely removed by the user but also be replaced by any fan of their choice. 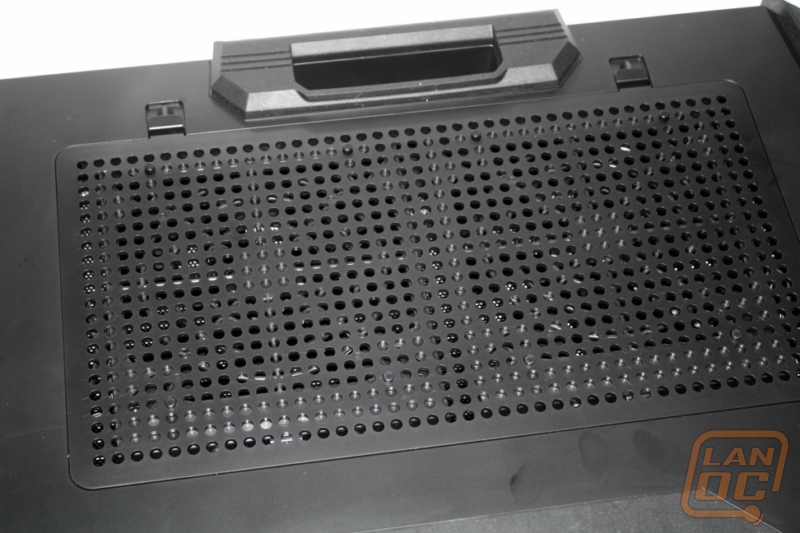 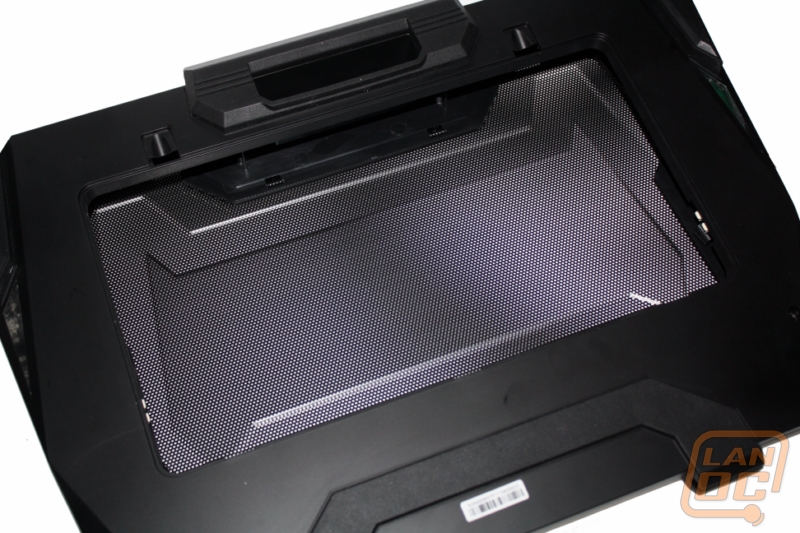 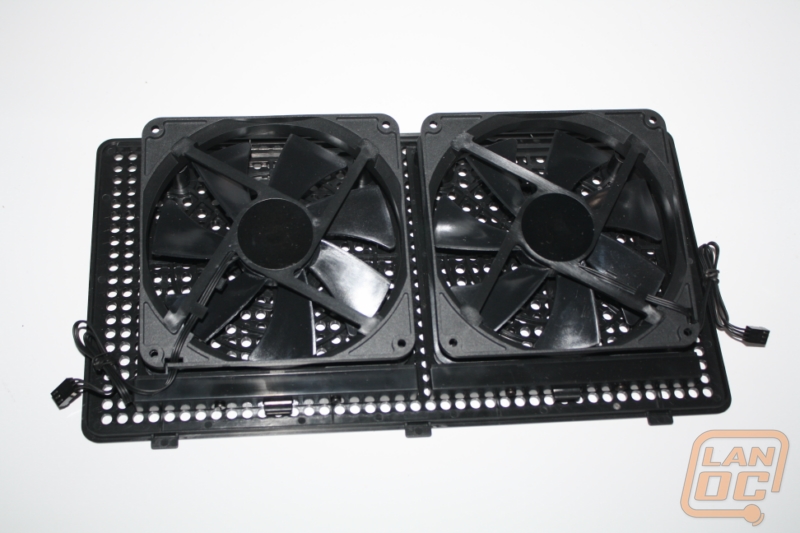 The SF-19 does require both the USB 3.0 cable and the DC 12V power adapter to function completely. The fans will run using power from the wall, while USB devices, especially 3.0, need both to work properly. Once you're powered and connected, simply position your laptop on the Strike Force 19, choose which color is your favorite (or set it to cycle through them all), adjust the speed (up to 2,600RPM), and game on. 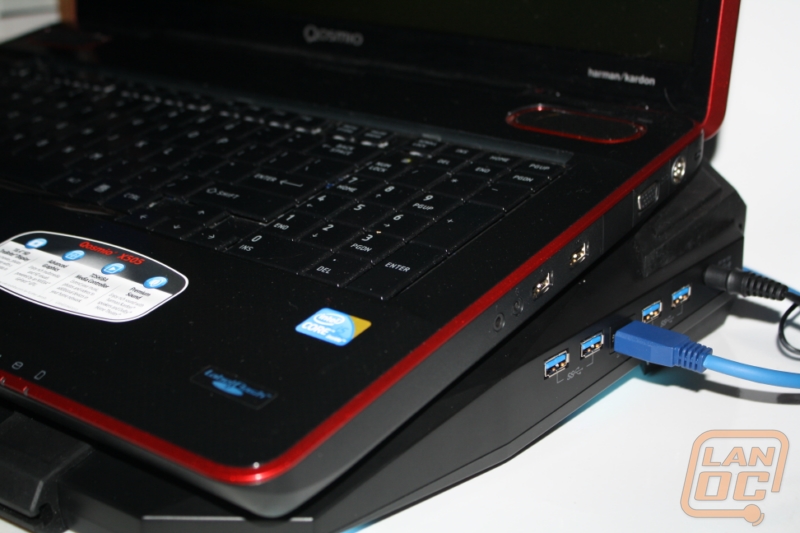 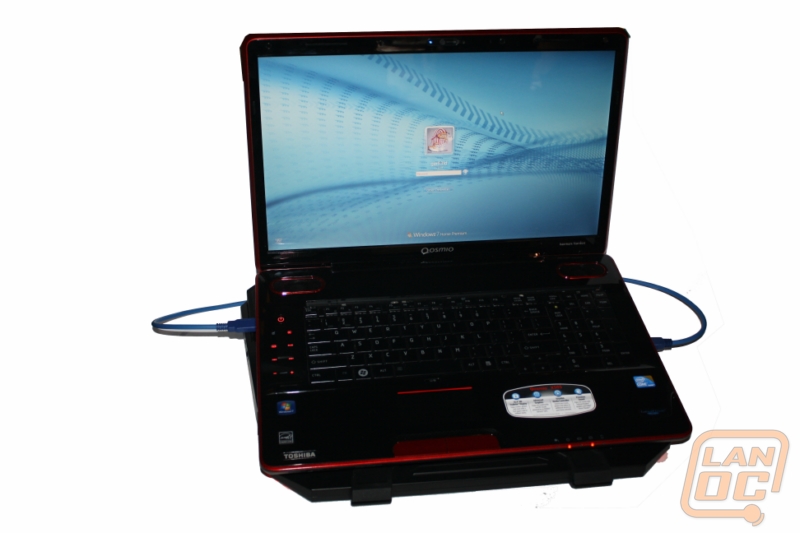 Performance
While the Strike Force 19 can be used with any sized laptops, in especially shines in the widescreen realm, such as Wes' 18.4" model. A cooler that only supports up to 15.6" or even 17" for that matter is going to have a hard time reducing temperatures for the 18-19" range. Complete with anti-slip feet, a carrying handle on the cooler itself, and of course USB 3.0, its easy to see why we were anxious to get out hands on this. 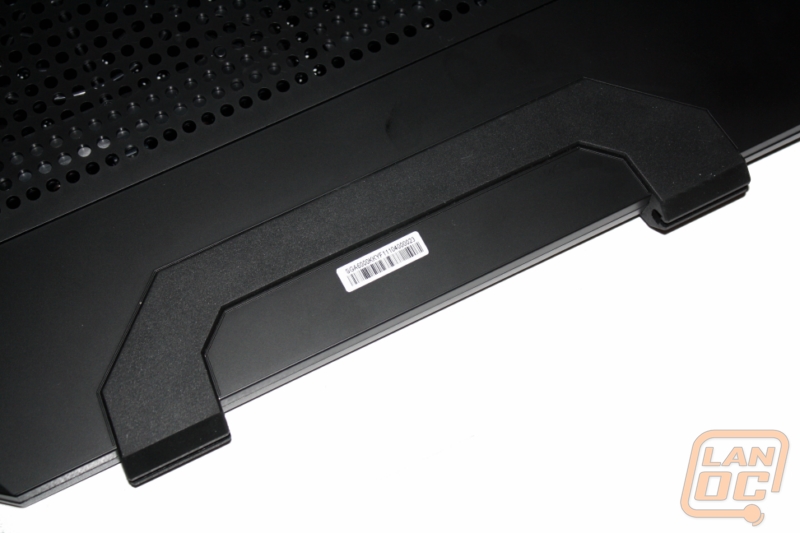 While the USB 3.0 is a great investment for the future, it's a difficult application at the moment. We seem to be in a transitional phase from 2.0 to 3.0, with a few devices rising to take advantage of the higher speeds of the latter. However, there are very few laptops that even included a 3.0 port, and due to the high-cost nature of the widescreen gaming notebook, users won't be upgrading just for the new interface. 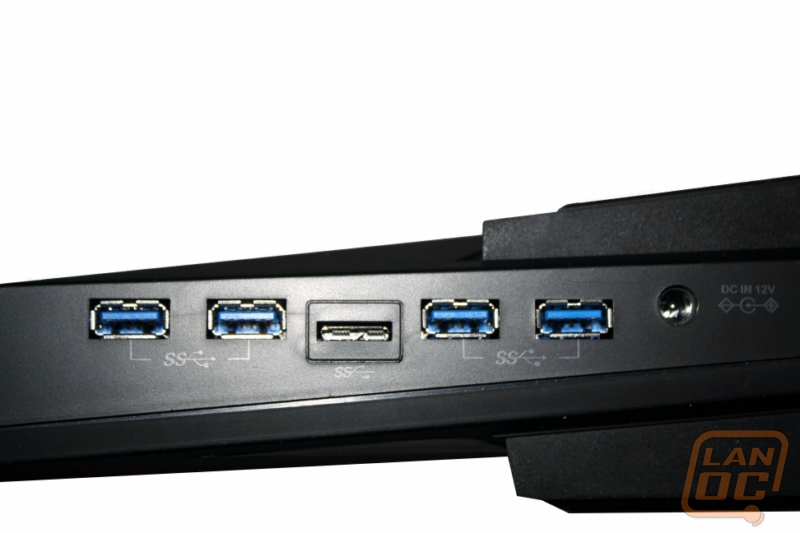 Again, once 3.0 becomes more standard, this model is really going to shine. And there is the option to purchase an express card creating a USB 3.0 port. Cooler Master will be offering a 2.0 model of the SF-19 that will be more affordable than the 3.0, which is a new, expensive technology.

The StrikeForce 19 creates an enthusiast environment with a glow emitted from four bulbs along the cooler. There are seven colors to choose from, as well as a cycling feature and one that fades in and out of colors. The latter function is a litte choppy though, trading a fluid transition flow of colors for a noticeable step-by-step intensity increase/decrease. The lights can be turned completely off as well. 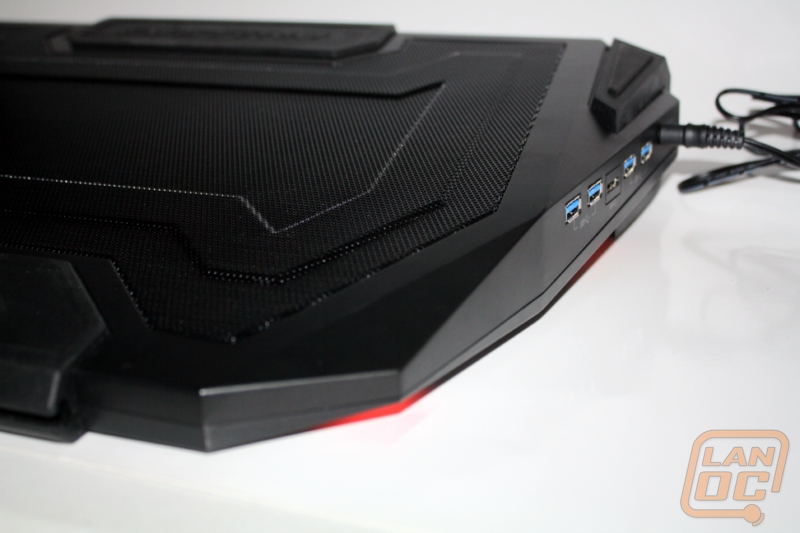 The fan system is a nice tribute to the popular NotePal U2/U3, though as mentioned the large 140mm fans don't have much room to move. They'll still occupy a good portion of the bottom surface of even an 18.4" model, and at a maximum 2,600RPM, you get a nice combination of speed and coverage. 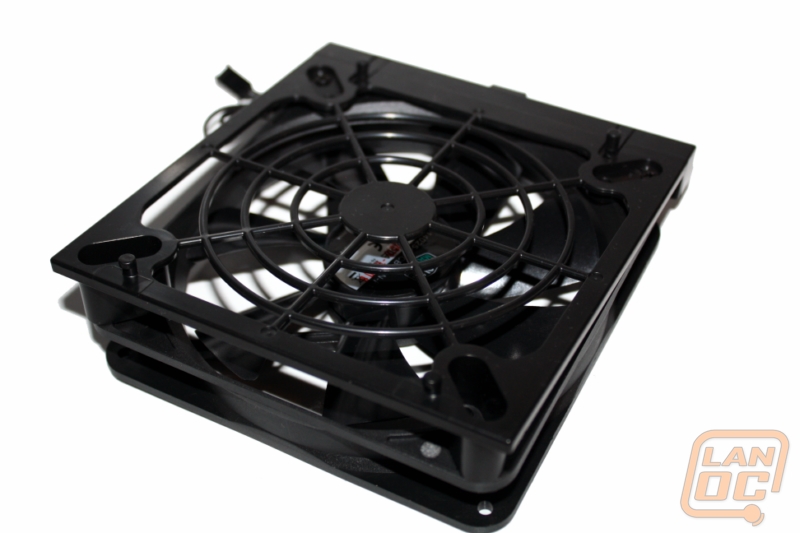 To test the cooling effeciency, the system was loaded using Prime95 and measured using RealTemp. 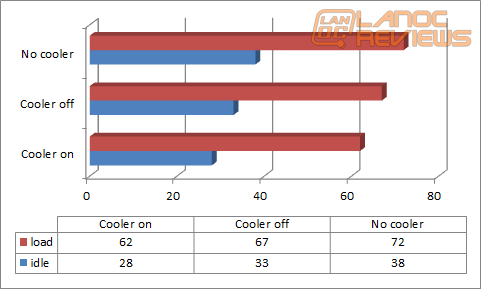 The reduction of ten degrees equipped with the SF-19 versus bare is impressive enough, but it is also interesting to note the difference of five degrees without the fans running, just resting on the cooler as opposed to bare table.

Overall
The Storm Strike Force 19 is a great option for widescreen users left out in the cold. The Cooler Master Storm series is a great line to tackle this project, since mobile gaming hardware often lacks effecient cooling otherwise. The USB 3.0 is a great option, especially looking towards the future, and with a more affordable 2.0 model, CM has covered all the bases. 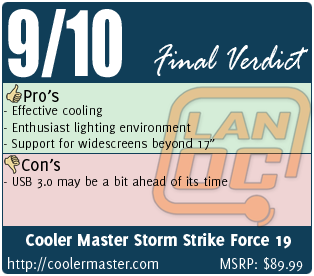 Author: Lersar
Contributing Editor / Event Staff
Adam is a big proponent of LAN parties, esports and speed-running, and helps organize our semi-annual LAN events. He has covered hardware and software reviews of a wide variety, but most content these days come from event coverage, such as other LAN parties.
Discuss this article
Log in to comment
Posts in discussion: Cooler Master Storm Strike Force 19

We have 1341 guests and one member online