Confident newcomer to the American gaming peripheral industry Ozone has recently released their first model of a gaming mouse, the Smog. With several features that appeal to the gaming enthusiast, Ozone boasts that the Smog will 'give you the best gaming experience ever.' Of course, here at LanOC, we don't take a claim like that too lightly. Ozone has sent us a sample of the Smog to test for ourselves.

Packaging
The Smog comes packaged in the 'front door' box that has become ever popular in the peripheral market, and its easy to see why. On the front you get a slick action shot of the mouse, trumped only when you swing the door open to reveal the actual thing beneath a transparent protective plastic. You can also see a few of the features of the Smog, including a small circular container and a swappable grip. 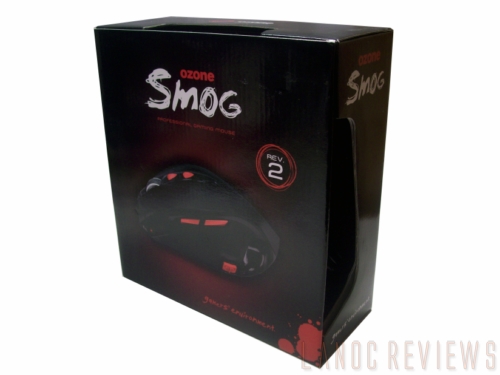 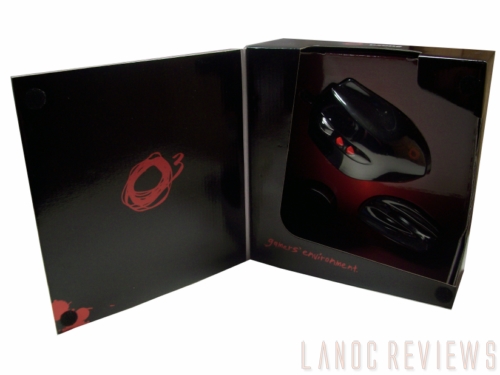 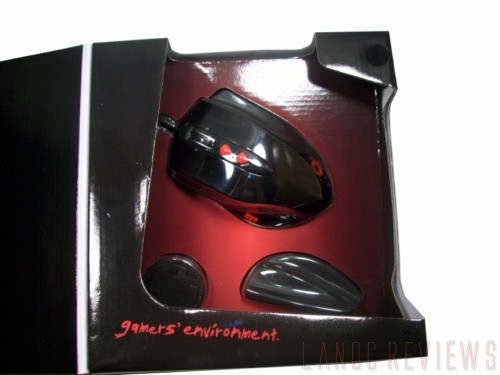 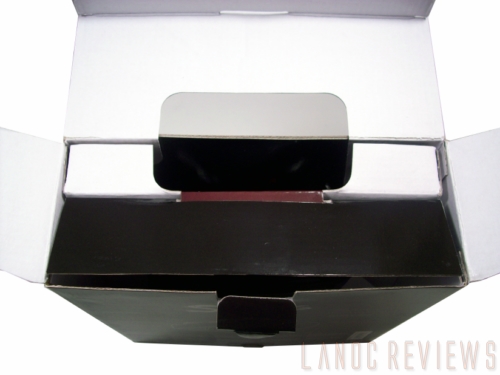 A little research on the box and you'll learn that the tin actually contains weights that allows users to fine-tune their experience, but that will be discussed later in the review. The entire package is easily accessible once you open the top and slide out the cardboard placeholders.

Included with the Smog mouse is an additional grip and weight container, as mentioned, as software disc, and a reference manual. 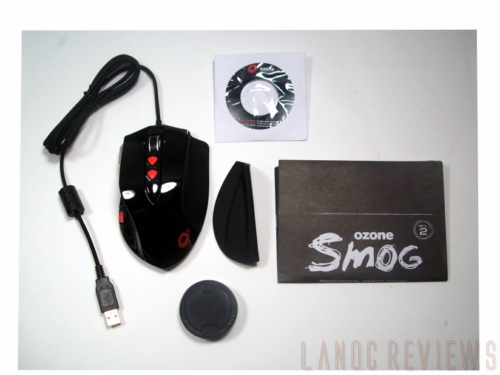 Installation
There is a little more to do here than simply plug the mouse into a USB port. As hinted to above, the Smog allows for a few methods of customizing your experience, the first being an exchangeable right-side grip. Both styles are made of a softened plastic to further aid in comfort and grip, the first featuring one bay for the ring and pinkie finger, while the second sports an additional ridge to separate the two. The grips are very easy to swap, pressing a large arrowed button on the bottom of the mouse to release the piece from the side. 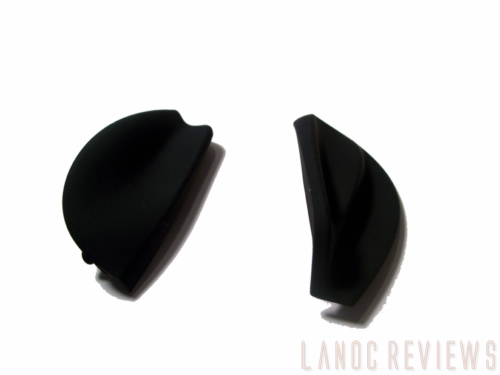 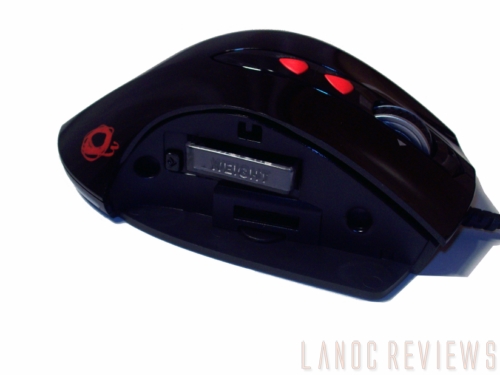 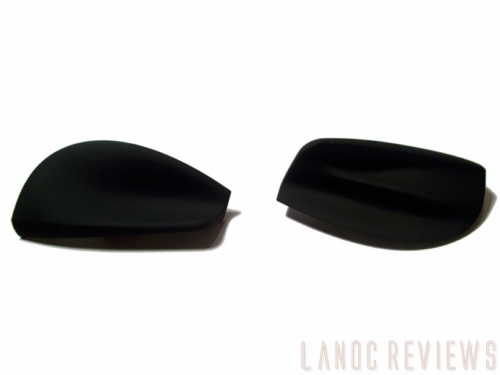 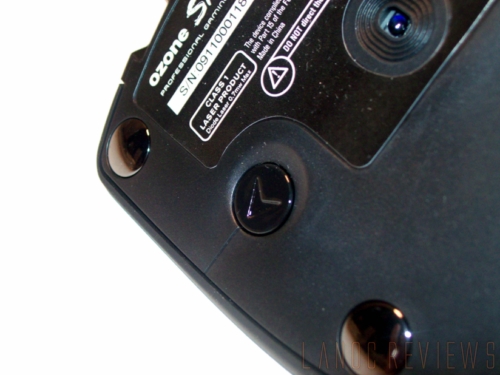 While swapping out those grips, you're likely to notice a small rectangular tray labeled 'weight'. This is, of course, where you'll add or remove the included 5gram weights to the desired feel. The tray can be a little stubborn to insert and remove, running on somewhat of a rail system, a release button is located on the left of the entrance to pop the tray out. When pulling it the rest of the way out, however, the back seems to catch on something inside. After a little jiggling, the Smog will forfeit the tray. You'll run into the same problem when you try to re-insert it as well.

The final step to complete the set-up of the Smog is the software, which is included on a CD with the mouse. The suite installs a generically named 'Gaming Mouse' folder in your Local Disk directory, around 8MB in size containing 30 files, including the application and several languages. 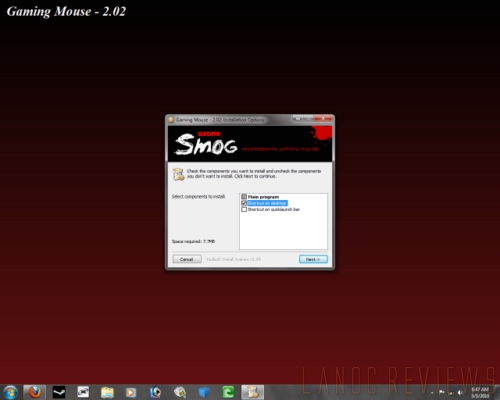 Performance
The Smog definitely has a unique look, with a sleek black finish and very bright red buttons that match the company's color scheme. However, the mouse then also features a few LED lights, including a long bar on the back and two small bars on the front that indicate which profile is selected (red, green, blue, yellow, purple, light blue, and grey) and a blue LED DPI indicator. Depending on which profile you have selected, you may have a lot of different colors going on here, which can look a bit odd, especially if the rest of your system already has a theme of it's own.

The grips are made of a nice softened plastic material, which is very comfortable. The first grip, however, can be very cramped, with your ring finger resting on top of your pinky finger and no in-between. This can become extremely uncomfortable during extended gaming sessions. It may, however, appeal to gamers with a smaller hand. The included swappable grip remedies the situation providing an additional ridge in the middle for the ring finger to rest on. You still only have so much room, and those with larger fingers may find both their fingers individually compact. 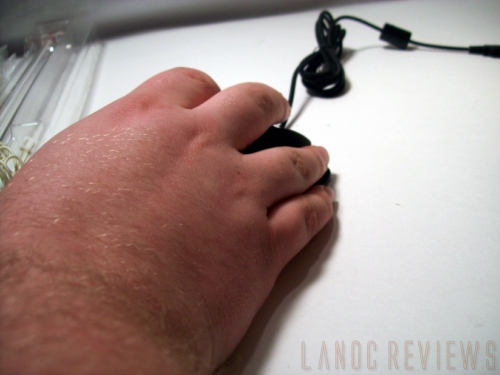 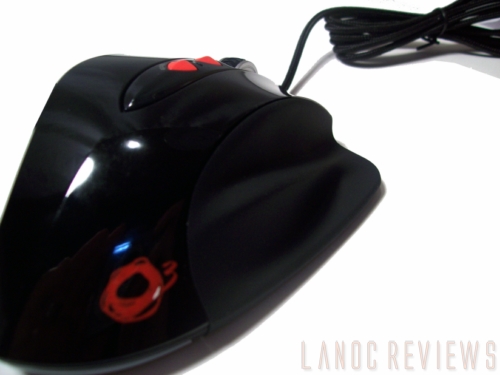 On the subject of comfort, the material Ozone has decided to finish the majority of the mouse in (that is, aside from the grips) is a very smooth, almost matte feel. It looks great, as long as you never have to touch it. The reality of the situation, however, is that you're going to be handeling it a lot, and therefore it will accumulate fingerprints and oil quickly. You may also notice that your hand tends to slide during use, a problem that is only multiplied when sweat is introduced from prolonged gaming. 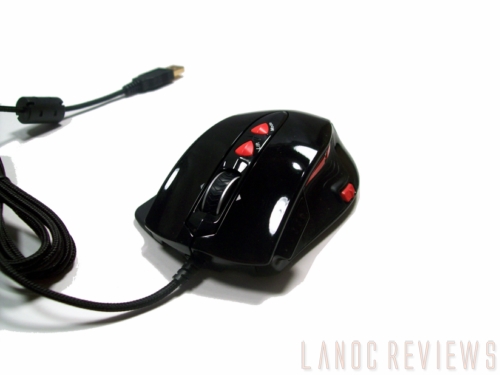 The natural rest of your hand on the mouse also feels as though its not long enough. The lower palm seems to simply fall off the mouse with little support, and joins your wrist and upper arm in resting on your gaming surface. Depending on your gaming style, this can really slow you down in-game, and becomes uncomfortable after a while.

The Smog isn't exactly friendly on all surfaces, either. The ceramic feet make it extremely fluid and a joy to maneuver on smooth and low-fiber surfaces. In fact, those use to a high DPI may find themselves re-tweaking their settings because of it's superb performance on select material. On others, though, the Smog seems to fight. The two rubber placeholders that fill the screw bays on the bottom stick out just far enough where they will catch on highly-compact fiber surfaces such as SteelSeries NP+. A good amount of friction slows the mouse down from that point. I don't if it's the ridges of the mouse or the ceramic feet themselves but it just doesn't feel right. It doesn't really affect the movement of the mouse on-screen, but does require a bit more effort than you may be used to, and there is an audible scratch. 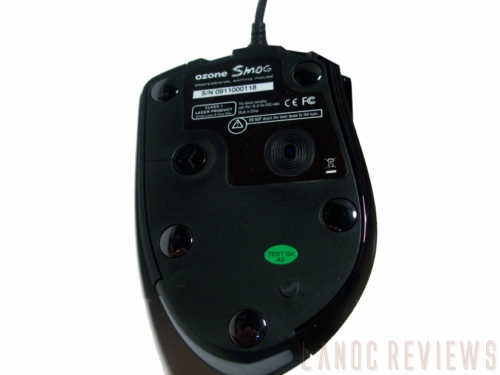 There is, however, a button just below the scroll wheel that allows for the mouse to auto-adjust lift in accordance to your gaming surface. Simply hold the button, and while the DPI indicator lights flash, move the mouse a bit to allow for the eye to analyze the surface.

Where the Smog might lack in the interaction realm it makes up in customization and rates. First, there are nine buttons, including scroll click down, left and right, which is a nice addition. There are also two programmable buttons situated nicely above the thumb. Underneath the thumb is a DPI step switch, allowing users to cycle through four preset values (450, 900, 1800, 3600) on the fly without accessing the software suite. As mentioned before, there is an indicator below the left-click button to show what setting is selected.

Programming the buttons does take a little work. First, you'll notice in the Button Settings Menu of the software you can't assign anything to the buttons yet; you have to create macros first. I found it odd that you couldn't even assign single-key commands here.

When you go to the Macro Settings, you'll see a list with an 'Ungrouped' folder by default and an editor on the opposing side. You can edit a few different ways. The first is using icons in the middle of the window that indicate a time delay, key down or release, mouse click or scroll wheel, and dragging them into the editor window. Upon doing so, a prompt is given to further instruct you, almost like a tutorial. For instance, if you drag a 'key down' command to the editor, it will ask you to press a key on the keyboard. You will want to partner this with a 'key release' command, of course. This method is the only way I could determine to assign a single-key to a button. 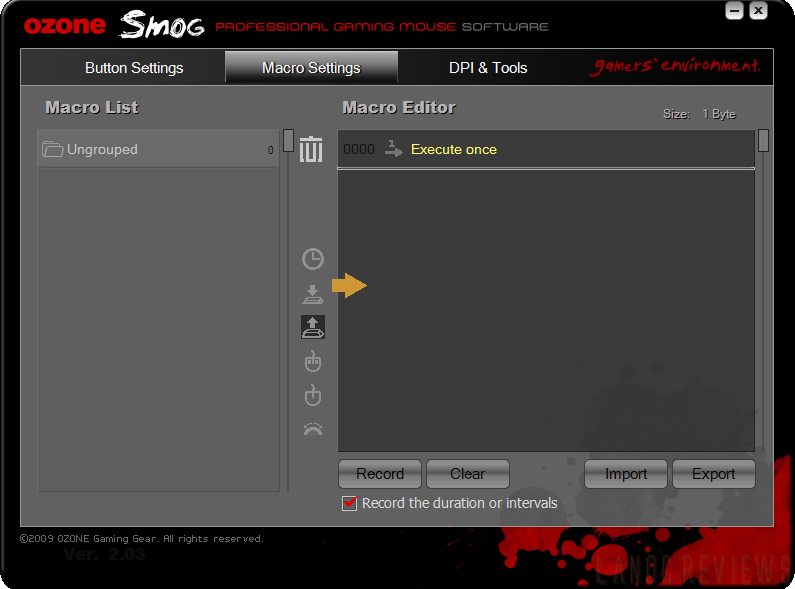 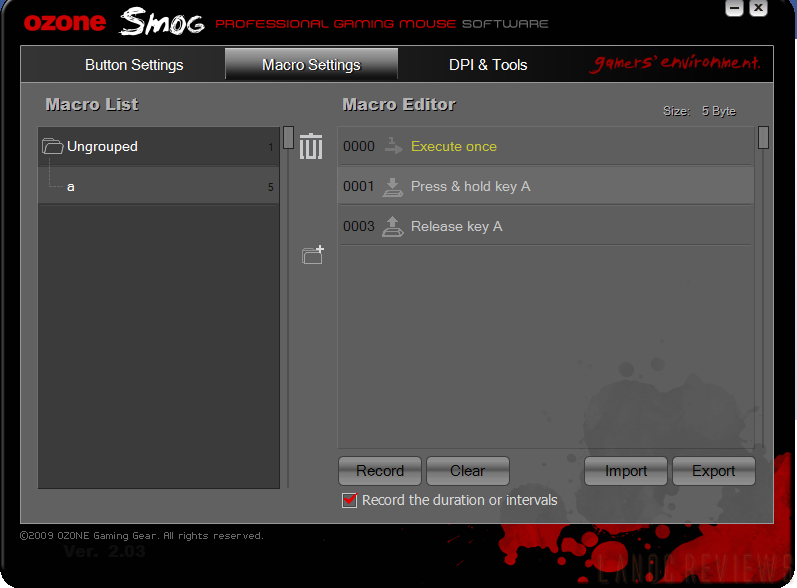 You can also use the 'Record' feature, which will keep track of everything you do once the 'record' button is selected. This is very useful when you know exactly what you need, and can cut down on the tediousness of programming each key individually.

Once a macro has been created, you then drag it over to a folder. The folder system is a great idea to help you manage your macros, allowing you to create and customize your own. For instance, if you're going into a raid in World of Warcraft, you can create and store all the macros relevant to that in their own folder. This comes in handy when you're assigning the macros to the buttons. After dragging the macro, you will then name the individual command within the folder. Now that you have a macro, you can go back to the Button Settings menu and drag the desired macro from the folder to the button. 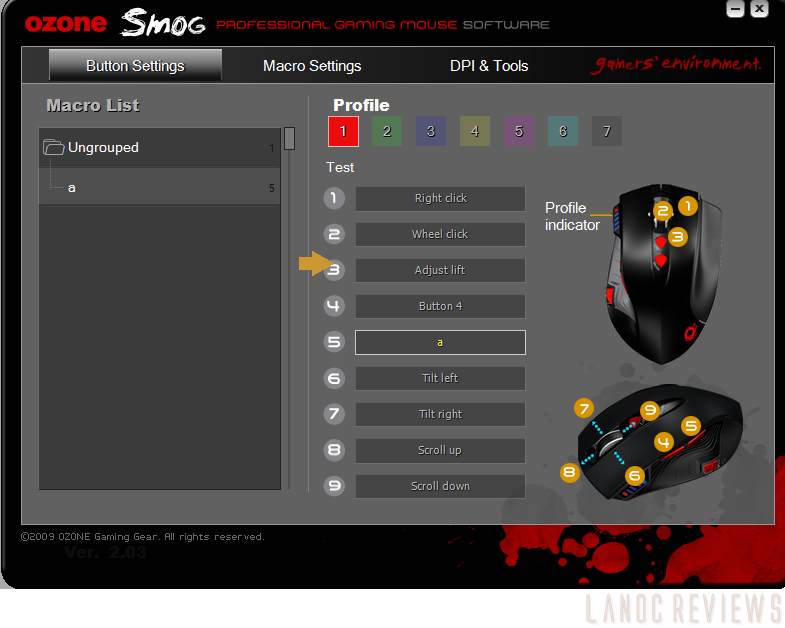 Overall
On the outside, there are a few quirks that hold back a shining potential of the Smog. Gamers of all types will appreciate the customization and ability of this mouse but may be turned off by the odd look and skeptical of it comfort-ability. However, there are a lot of things that Ozone has done excellently, and some faults to a reviewer with a larger hand. That said, this mouse may appeal to those with a smaller hands. We've definitely seen potential in a company tailoring to the needs of professional gaming, and look forward to Ozone's next installment of mice. 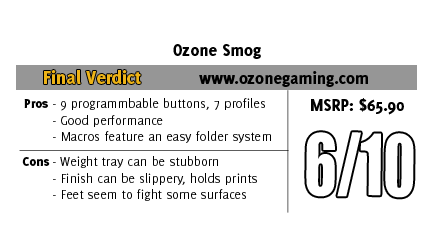 Author: Lersar
Contributing Editor / Event Staff
Adam is a big proponent of LAN parties, esports and speed-running, and helps organize our semi-annual LAN events. He has covered hardware and software reviews of a wide variety, but most content these days come from event coverage, such as other LAN parties.
Discuss this article
Log in to comment
Posts in discussion: Ozone Smog

We have 1188 guests and one member online