Overclocking is useful not only for pushing enthusiast cores to new records, but also for budget builders to get the most out of their money. Therefore, it would only make sense that a CPU cooler also be affordable, while of course keeping the processor from overheating. Today we review the Thermaltake Frio, a goliath cooler designed for overclocking capacity.

Packaging
The Frio is cased in a cardboard box similar to other Thermaltake products, which do a great job of providing information even from the earliest part of the experience. The front of the box features a nice shot of the product with a smooth background combination, as well as the product name, some call out features, and even a little square of red to foreshadow a major theme of the Frio. 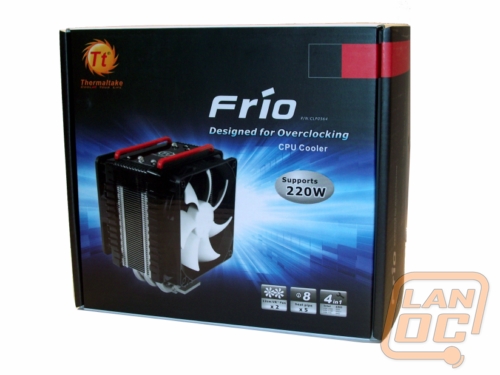 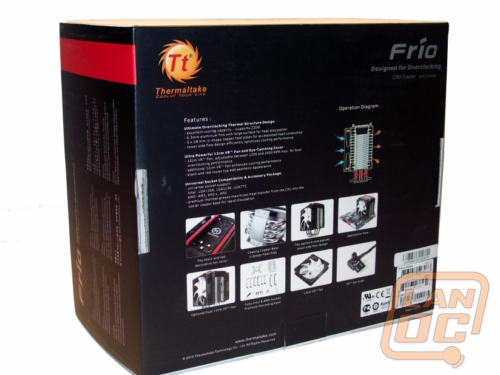 Inside, the cooler is tightly cushioned in a unique foam holder holder, craddling the equipment in the middle of two blocks. Underneath you'll find the plethora of accessories that help to make this cooler compatible with so many sockets. 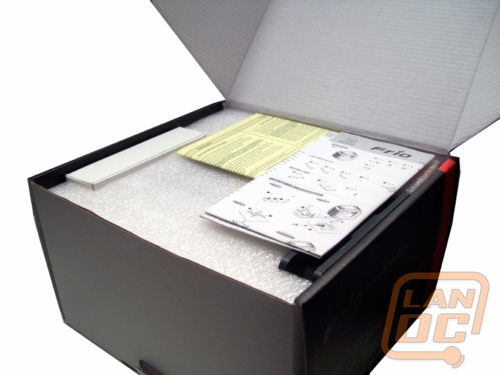 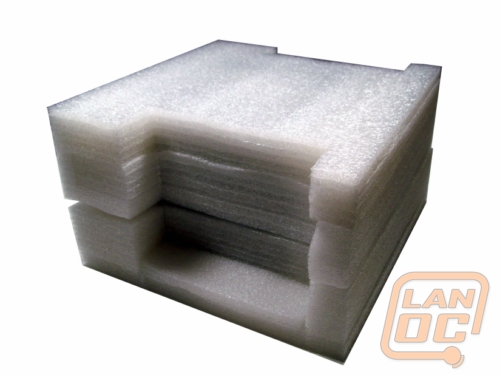 Installation
Having just recently experienced a not-so-smooth heatsink installation, I especially appreciated the ease of mounting the Frio, even with a backplate. As opposed to the more frustrating models, the bolts to secure the cooler to the reverse side of the motherboard are actually on that side of the board. Simply put, instead of trying to reach into the case and fight with the cooler itself, you can easily tighten and secure the Frio from the back, with plenty of open space. 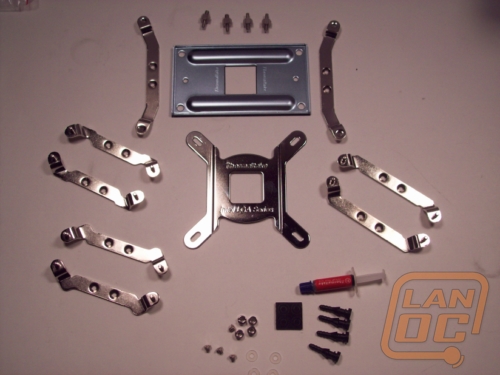 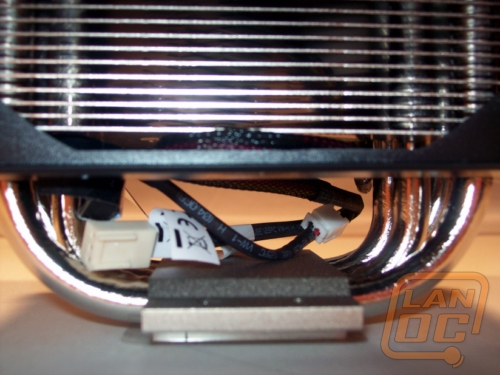 Depending on your situation, you may have to install the cooler with only one fan and then install the second 120mm afterwards; if so, I wish you luck. Trying to pull the rubber screws through the holes in such a confined area is a task I wouldn't wish on my worst enemies, but this isn't a issue specific to Thermaltake itself, the majority of heatsinks suffer from this common pain. However, if you can complete the installation of the fans before mounting it to your board, the entire installation process will take only minutes. 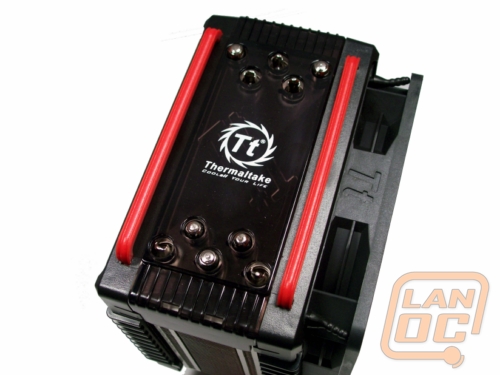 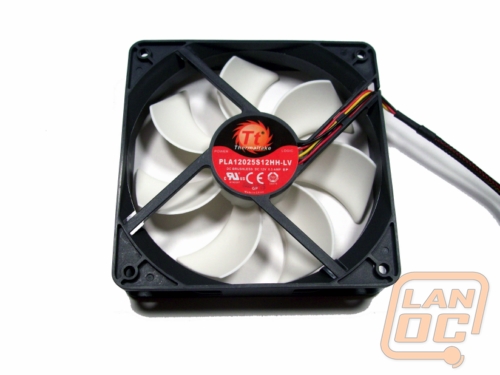 Of course, with two fans, you'll need to provide power to both, achieved either by system fan connectors on the board itself or molex power convertors, not included. 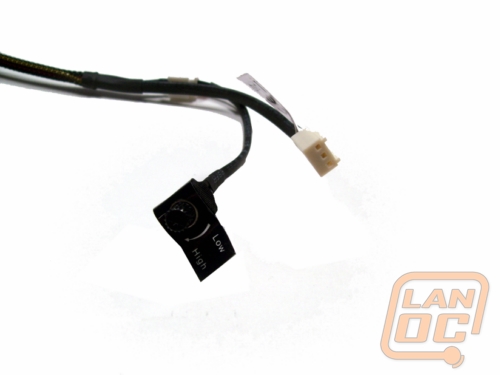 Performance
Installed, the Frio definitely looks impressive. The dual-fan cooling system works espeially well in combination with a top- or rear-exhaust case fan, and considering the 2,5000RPM runs quieter than I expected. The Frio is designed with 5 U-heatpipes in the shape of a W on both ends of the cooler, and as mentioned, two 120mm fans blowing through aluminum fins. 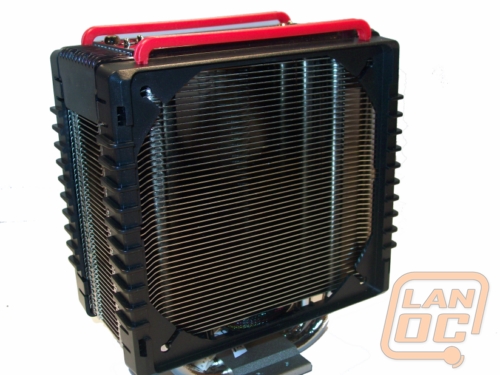 Obvious from the packaging, the Frio is design with the intent to support overclocking, achieved by a thorough cooling system as mentioned above, as well as the capabilities to support the high-end components that go hand-in-hand with stressing a system. Also impressive, however, is the MSRP, a modest $59.99.

The true value of that price point comes from actual performance. To test the Frio, we measured both the idle and stress temperatures of the system. After running Prime95 to bring the load to 100% for one hour, temperatures were monitored and recorded using RealTemp 2.5. This is consistent with all our previous cooler tests in order to achieve comprable results. 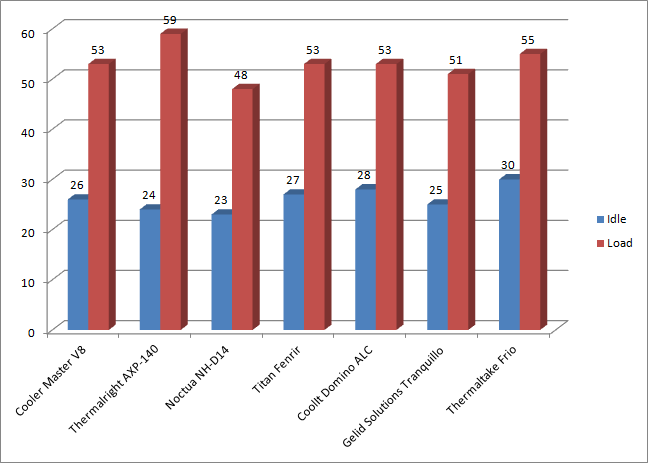 Our idle test recorded somewhat high-end results at 30 degrees Celsius, while load temperature steadied at a solid 55 degrees Celsius. Results are a few degrees higher than previous coolers we've tested, but the prices of those also correlate higher as well.

Overall
A reasonable price tag combined with overclocking capabilities make the Thermaltake Frio quite an attractive cooler. Physically, it's a pretty large model, which may cause restrictions in some cases. That being said, I'm a fan of it's facade as well as it's design. Temperature results recorded were a few degrees higher than previous models, but in comparison with price, performs well. 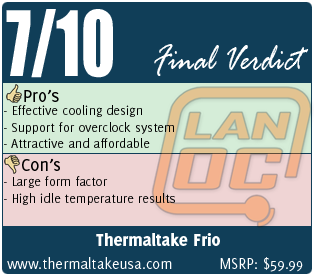 Author: Lersar
Contributing Editor / Event Staff
Adam is a big proponent of LAN parties, esports and speed-running, and helps organize our semi-annual LAN events. He has covered hardware and software reviews of a wide variety, but most content these days come from event coverage, such as other LAN parties.
Discuss this article
Log in to comment
Posts in discussion: Thermaltake Frio

We have 1551 guests and one member online