With a good portion of the chassis in a bright, white color with black being used for trim and for mesh areas, the 600T Special Edition has a very distinctive look, much like a Storm Trooper from Star Wars (Scout Trooper to be specific). Let’s be honest, this is a sexy case! In the time before writing this review, after taking photos, I had the 600T at my house. With all of the custom painted PC’s and everything else I still had people stop and compliment the 600T. Let’s take a look at a few of its exterior features.

Starting with the left side, you can’t miss the side window. Corsair trimmed the acrylic window in a thick black to match the rest of the case. Along with the window you have a black “foot” on the bottom that runs across a good portion of the case. Above the window there are two spring-loaded black latches that keep the side panel on. When they are both pushed down the side panel comes off smoothly. 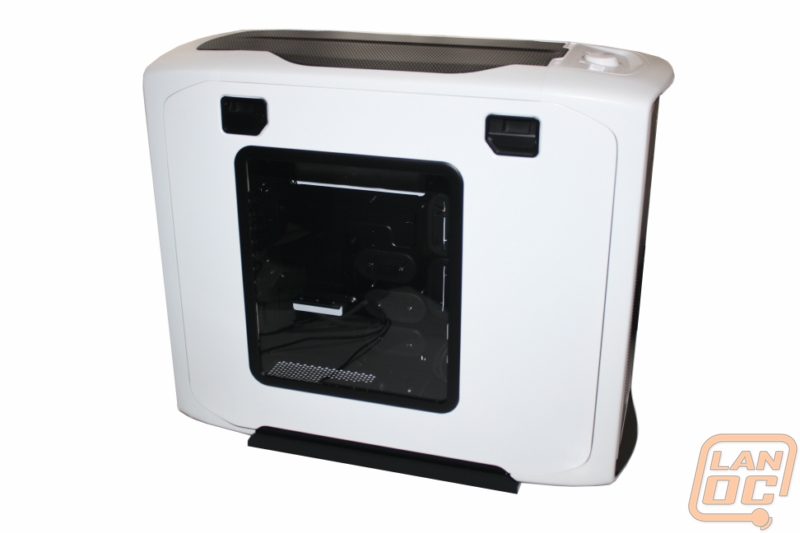 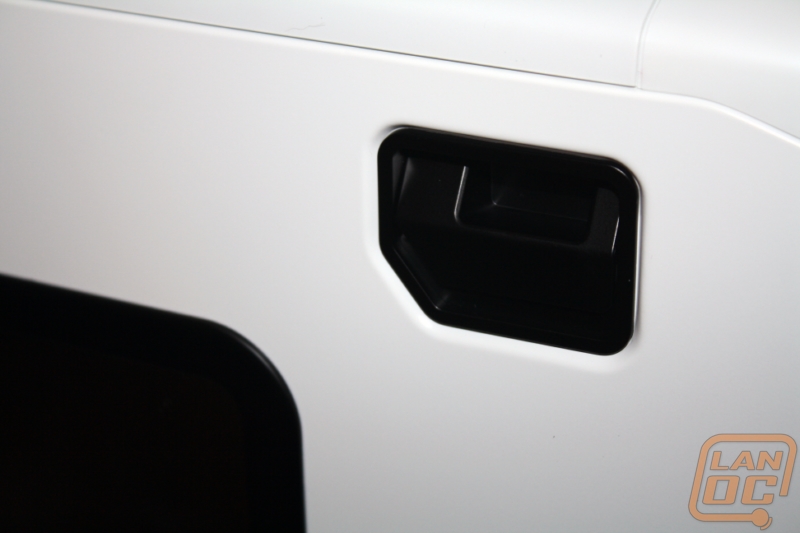 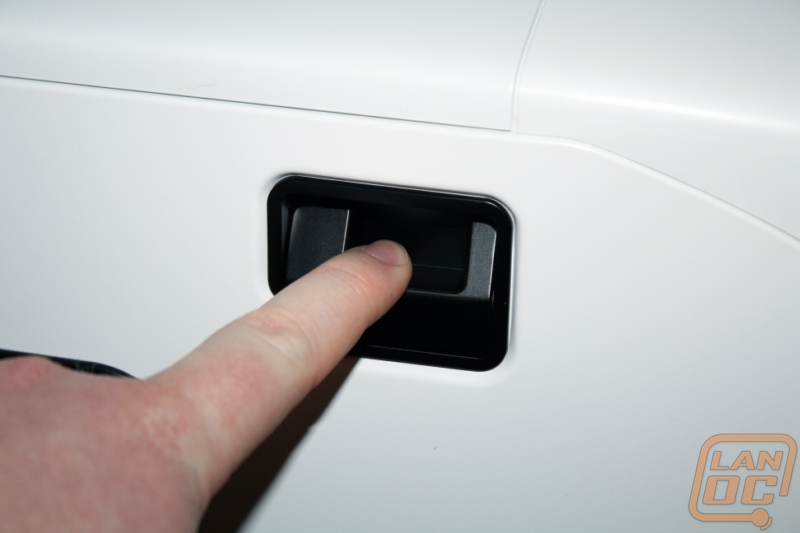 Up top the front I/O panel faces up with a slight angle toward the front. The panel looks strangely reminiscent of a small house heater with the large dial in the middle. As it turns out that dial does control your fan speed, with the correct components you may be able to make this into the coolest portable heater ever made! Next to the fan controller you have four USB ports on the left side and a USB 3.0 port and firewire on the right. With 5 usable front USB ports the 600T has more ports than any other case I've seen. This should make hooking all of your humping dog USB drives and coffee cup heaters easy as pie; you won’t even have to unhook your mood lighting! On each side you have a 3.5mm jack for your headphones and microphone. They did a nice job of labeling both ports but it some may prefer to see them color coded with the traditional pink and green. 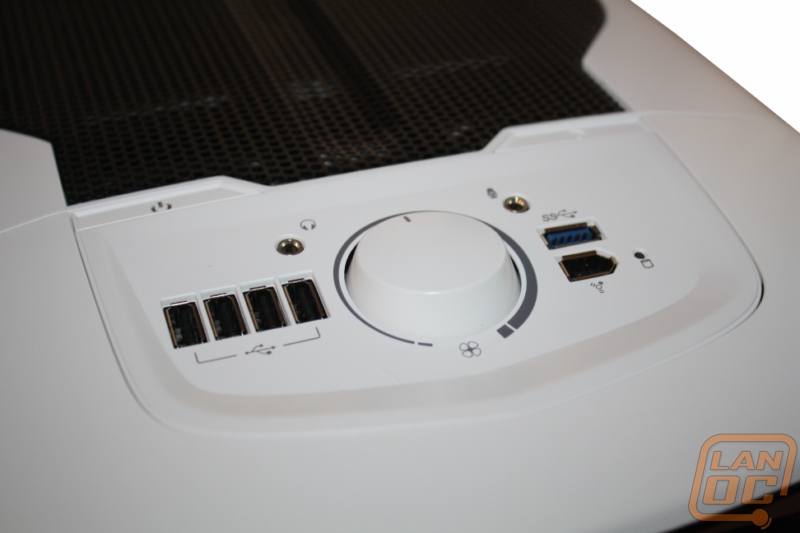 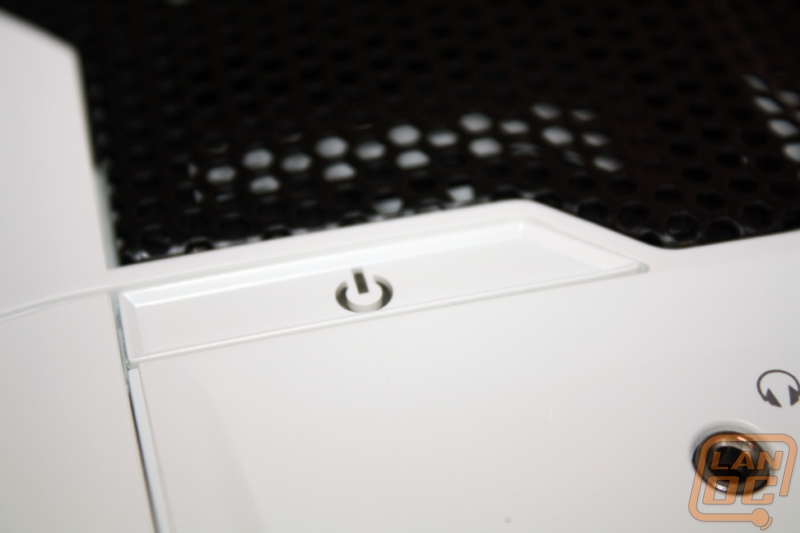 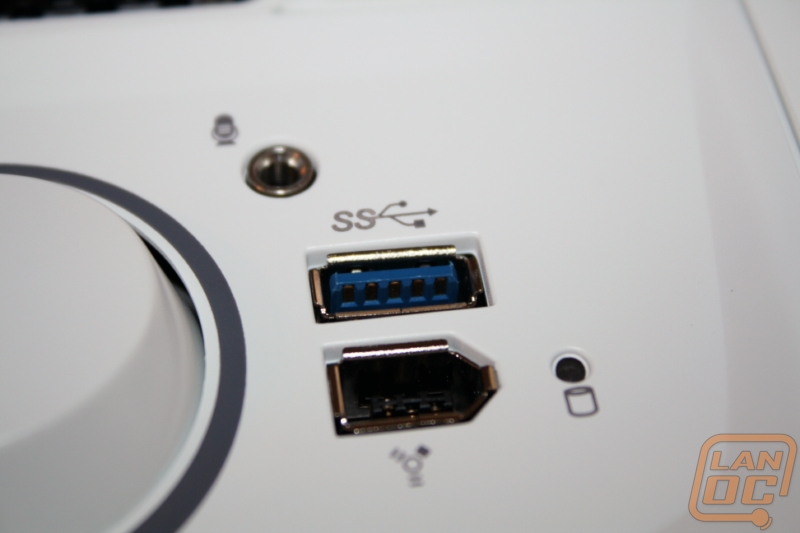 For power and reset buttons Corsair has tucked them in between the front I/O panel and the top mesh. Although they do work perfectly I found the plastic buttons to lack the quality feeling you get with everything else on this case. Speaking of the top mesh, I was amazed when I realized all I had to do to remove the mesh was lean on it. Corsair attached the mesh with an easy-to-use spring-loaded mechanism... this is worlds easier than removing the top mesh from any other case. Under the mesh you can spot the top-mounted fan and the black chassis hiding under the white armor. You can see the silicon vibration dampeners on each of the fans screws, a nice touch. In the corner I spotted something else: a lock. Corsair tucked away a nice lock to secure the side panel to prevent someone from getting in your case. Not only do you need the key, but you would also have to know where to find the lock. 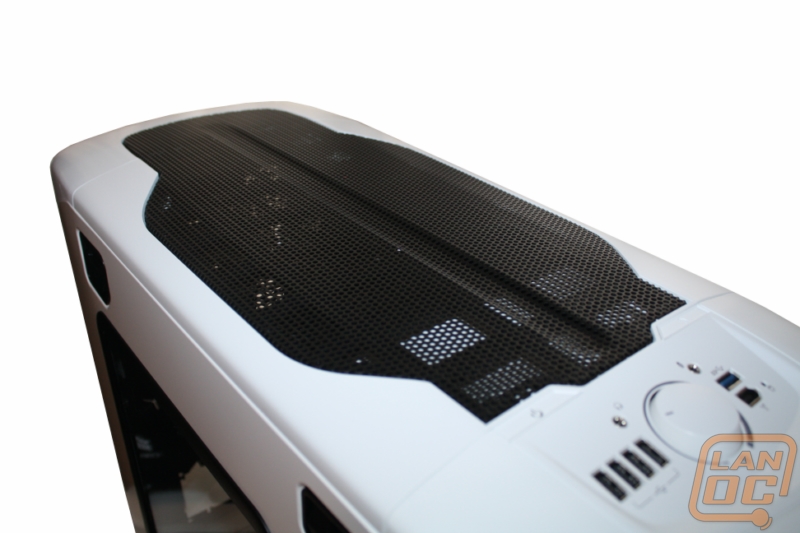 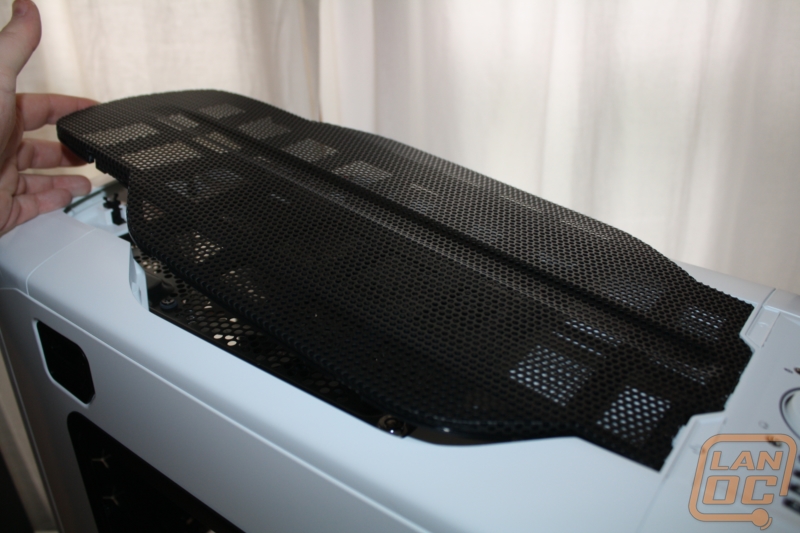 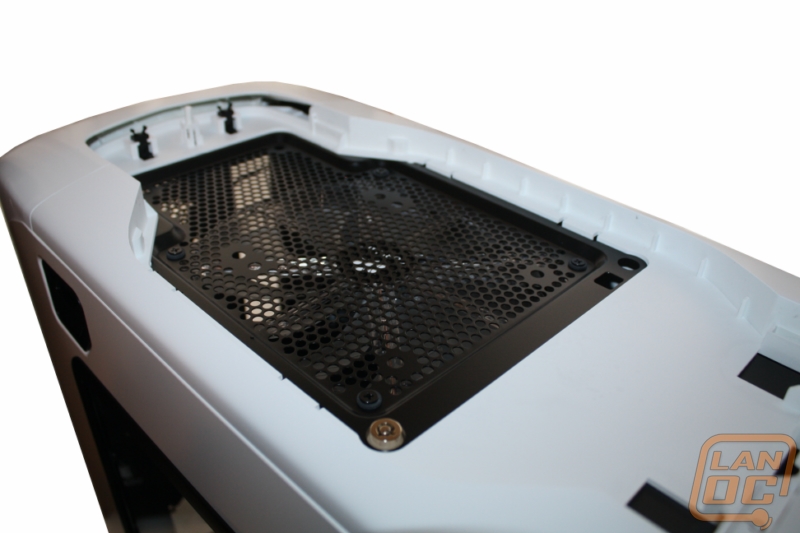 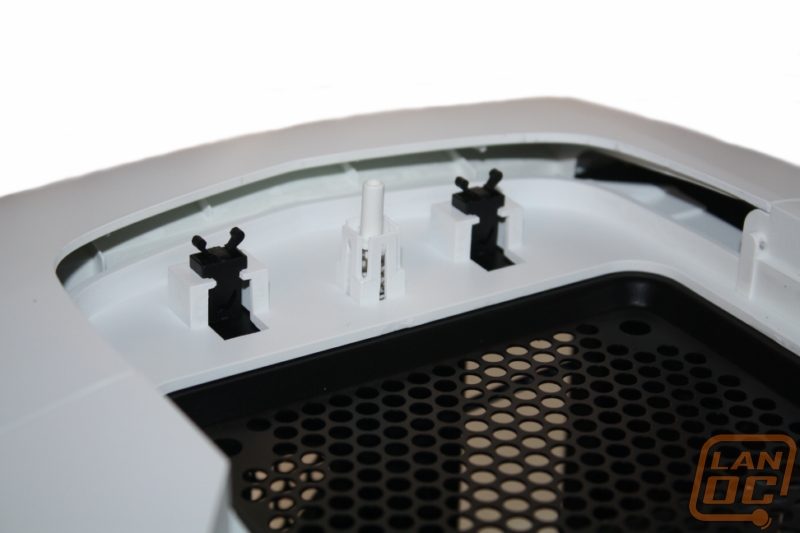 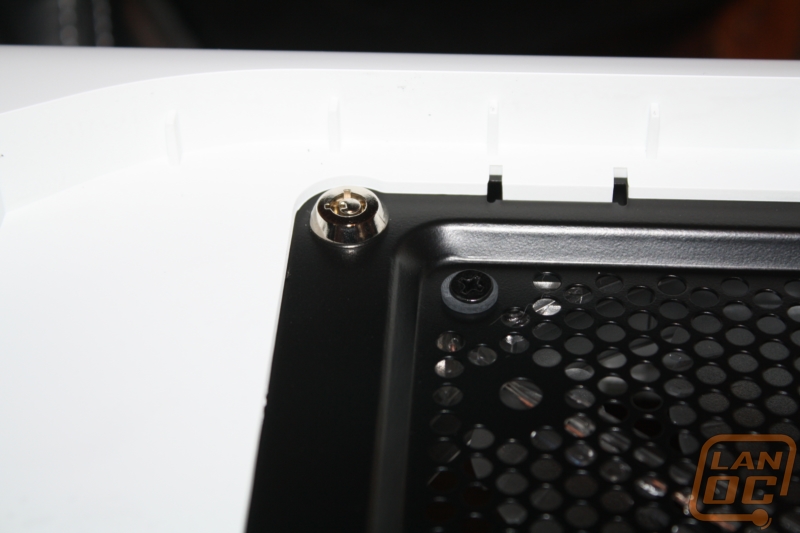 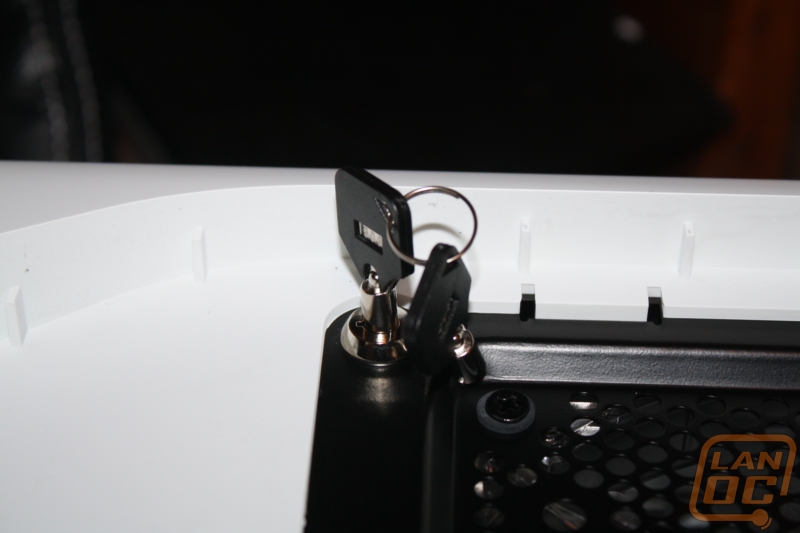 The second side panel is similar to the first with two latches, but lacks the side panel window for obvious reasons. 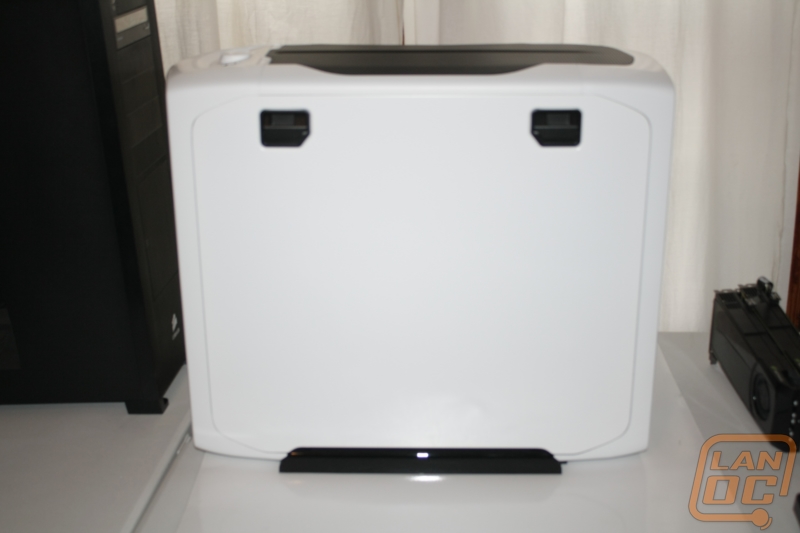 Around back you can see even more of the sexy black chassis. You have a total of 8 PCI slots to work with, typically you would only see 7 on all but the largest cases. You also have two large water cooling holes with grommets and you can spy the rear fan. The rear fan also has the same anti-vibration mounts that the top fan had, this should be a sign of what to expect when we get to testing. 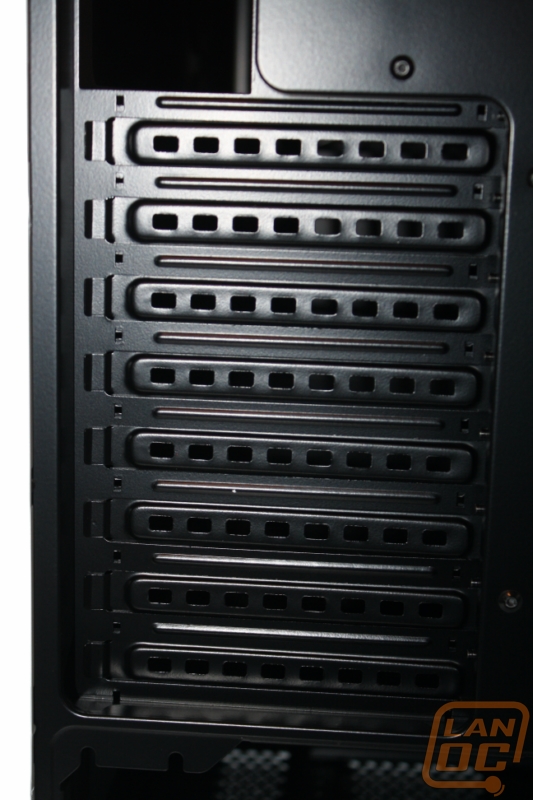 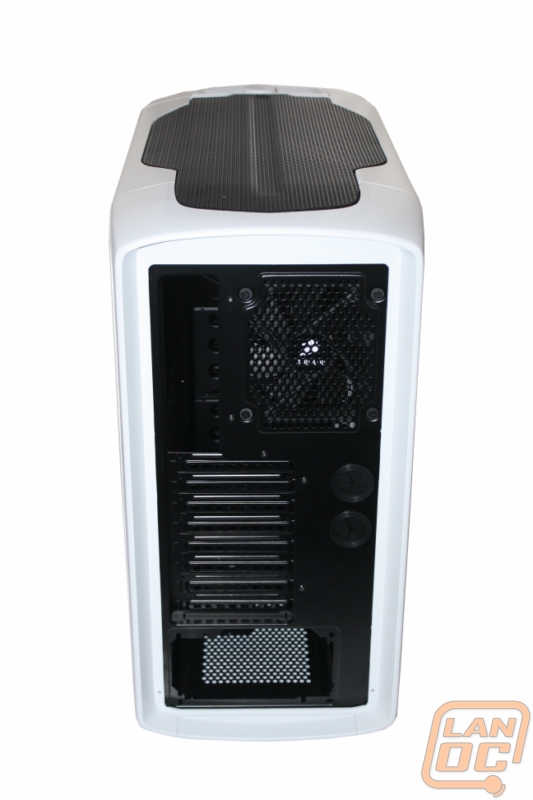 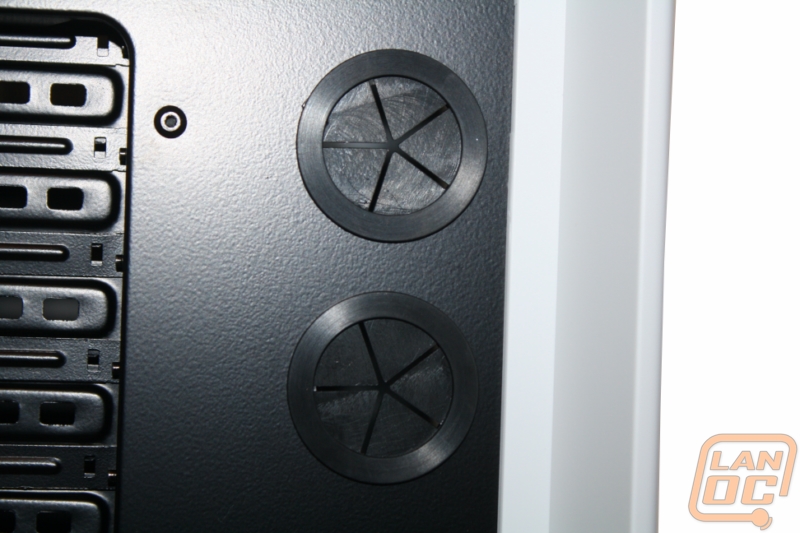 On the bottom you can finally see the C-shaped foot that keeps the 600T standing up. They have placed large rubber grips on all four corners to keep your case from going anywhere unless you want it to. They also have a large mesh filter on the bottom to keep you from sucking in any dirt and dust when the fans are in high gear. This filter can be removed by pulling on the bottom of the front. I found it to be a little difficult without setting the case on its side, but it can be done. Even the filter's mesh is white in color to match the rest of the case. That is a nice attention to detail for a section of the case that most people will never look. 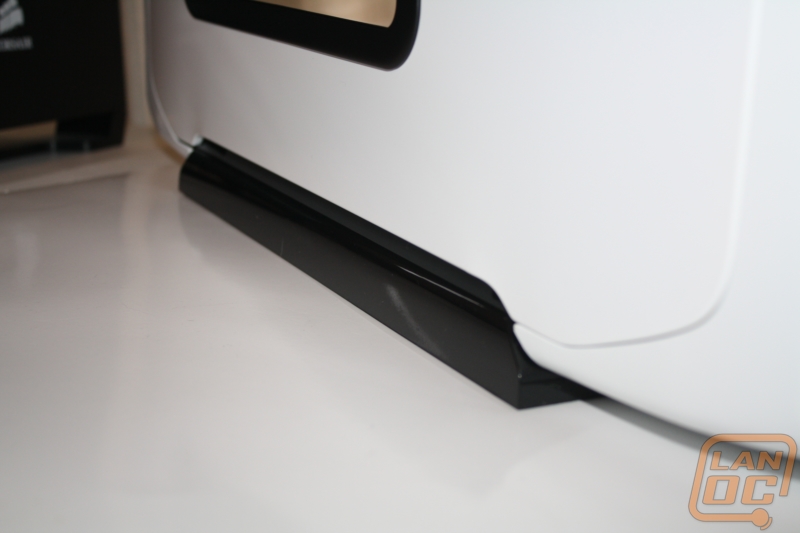 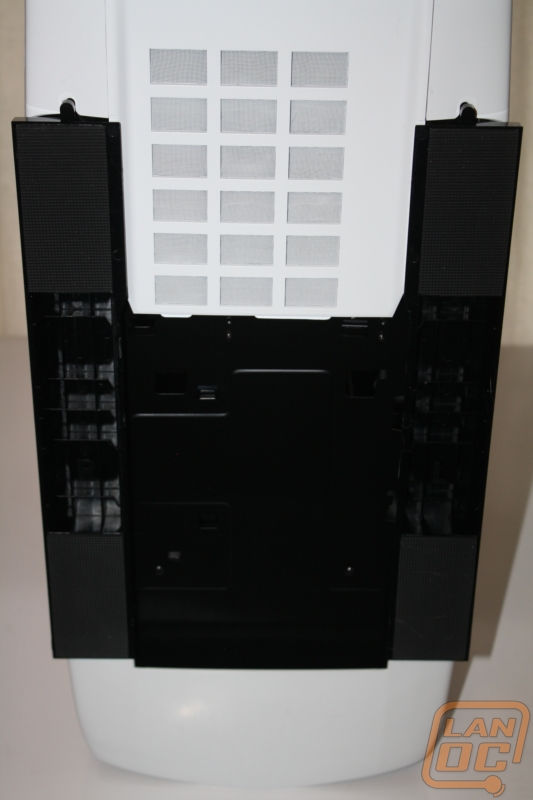 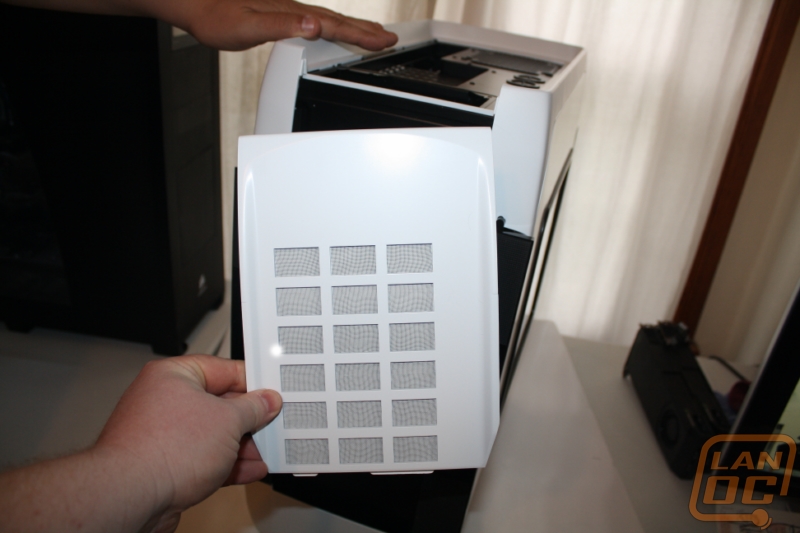 Last but not least we have the front of the 600T. With just an inch wide white piece of trim outlining the drive bays this is one of just a few exterior areas of this case that is mostly black in color. You have four 5.25" drive bays up top for those of you who will need them (I have found that I use discs so little that using a USB DVD drive is more efficient). Down on the bottom you have a Corsair logo placed on the mesh. While leaning on that area I noticed that the bottom half of the front is spring loaded like the top mesh. Like before its hiding yet another fan. The removable front panel should make keeping your case nice and clean. 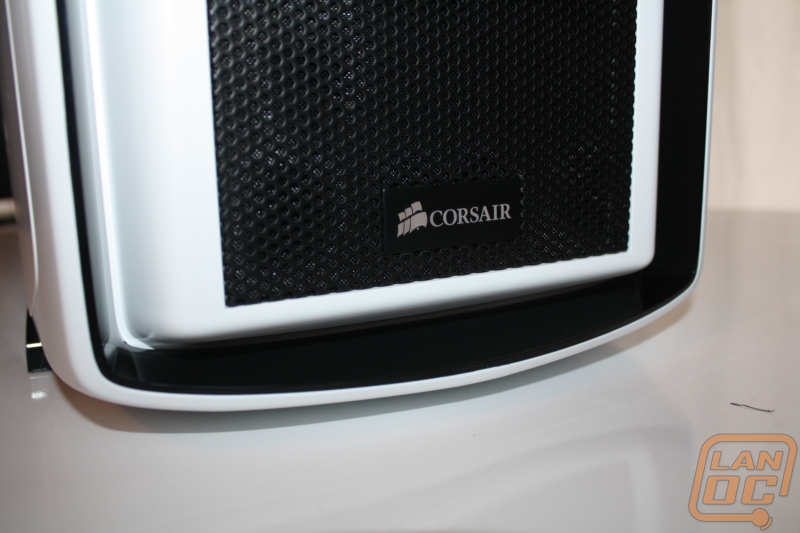 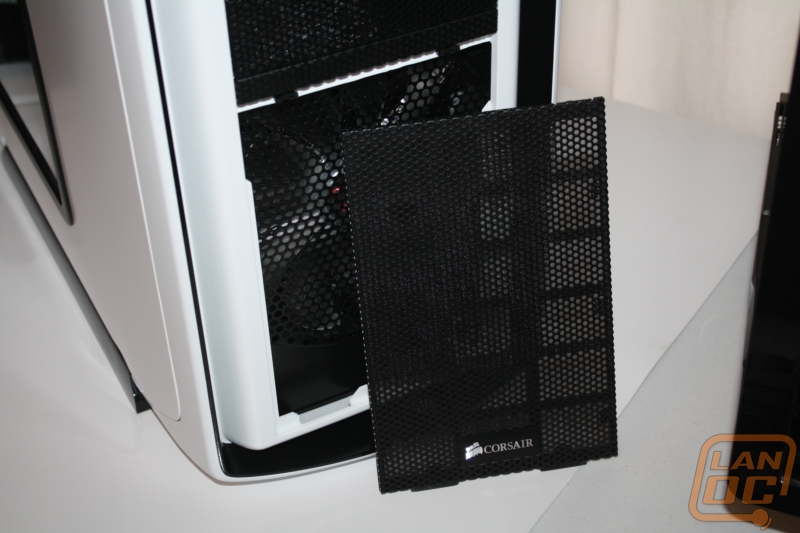 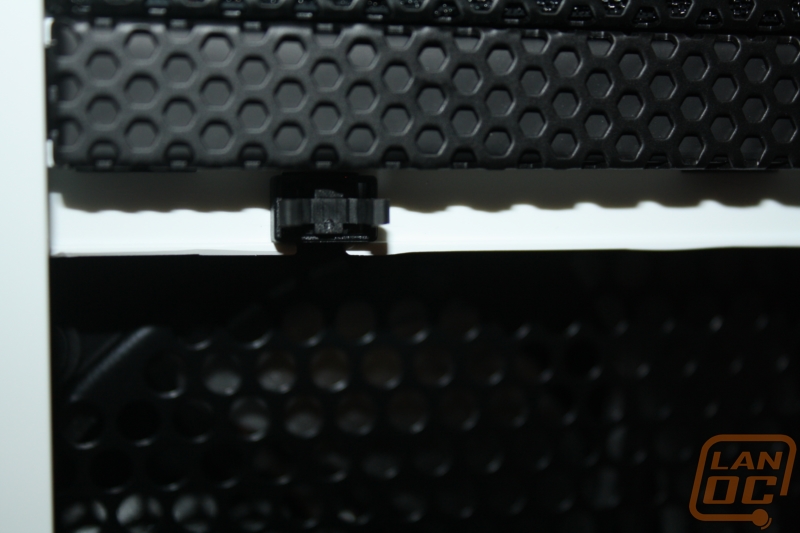 Wingless92 replied the topic: #16292 25 Jun 2011 02:29
Corsair - Some of the most thought out cases in the world. They really make building a system fun. The rubber grommets around the cable management holes really add to it. Hands down, Corsair is my favorite case manufacture.

Kelf replied the topic: #16294 25 Jun 2011 04:57
This case is Awesome! I've stuck mainly with the mid's and sacrificed in a few areas that they seem to have improved with this case, mainly the room behind the motherboard tray and the awesome cable management holes. someday I WILL own this case lol.

Kelf replied the topic: #16298 25 Jun 2011 06:17
I just looked at the one you mentioned and it is pretty nice and both are similar but I'd still choose the 600T for myself, based on the few differences on the inside I like, the main one being the white fans instead of the blue, it's kind of refreshing in a way.

Wingless92 wrote: Its almost hard to choose between this and the NZXT Phantom. Both cases are awesome.

garfi3ld replied the topic: #16347 27 Jun 2011 21:29
lol at calling one line Plagiarized. I am glad to see that I am not the only one who feels the case looks like a Scout Trooper but I did not take it from Scott. This was something that was discussed even at CES when we first saw the case.
Read More...