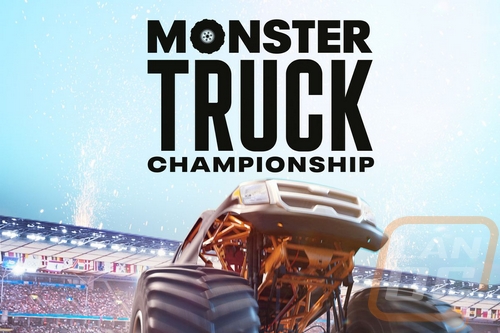 Okay, I’m going to look a little old here, but back when I was a kid I spent a lot of time playing the original Bigfoot game on NES. It had upgrades and boosts which looking back seem so ahead of their time and later fueled my love for Gran Turismo. Prompted me to end up at any local monster truck show as well. But eventually, things got a little too crazy, or I drifted away from it all. But when I received an email about an upcoming game called Monster Truck Championship all of that came back.  It isn’t the only monster truck offering, but smashing cars, doing tricks, drag races, and normal races all piqued my interest. Especially with it being supported on Steam as well as PS4, Xbox One, and the Switch. Today is launch day (for everything except the Switch) and I’ve been playing it, lets take a look at how things went with Monster Truck Championship on the PC.

So Monster Truck Championship has three different game modes. The main mode and what you land on when you start is the Career mode. But there is a quick play option as well as multiplayer. The quick play lets you select a game mode which you can pick from a race, time trial, drag race, freestyle, and destruction. This is a similar layout to a normal monster truck event, especially Monster Jam though they are careful to use that name as there is a licensed video game based on those events. Races are full loops and you can pick the number of laps and opponents as well as their difficulty and of course the map. Time trials are similar but it is you racing the clock, not everyone out on the track at the same time. Drag races are shorter single lap races that have a tournament layout with head to head races. Freestyle is most likely more like what a lot of people think about when they think of monster trucks, you are in arena maps and doing tricks with a point system. Then Destruction is similar, but focused on the amount of damage you do. 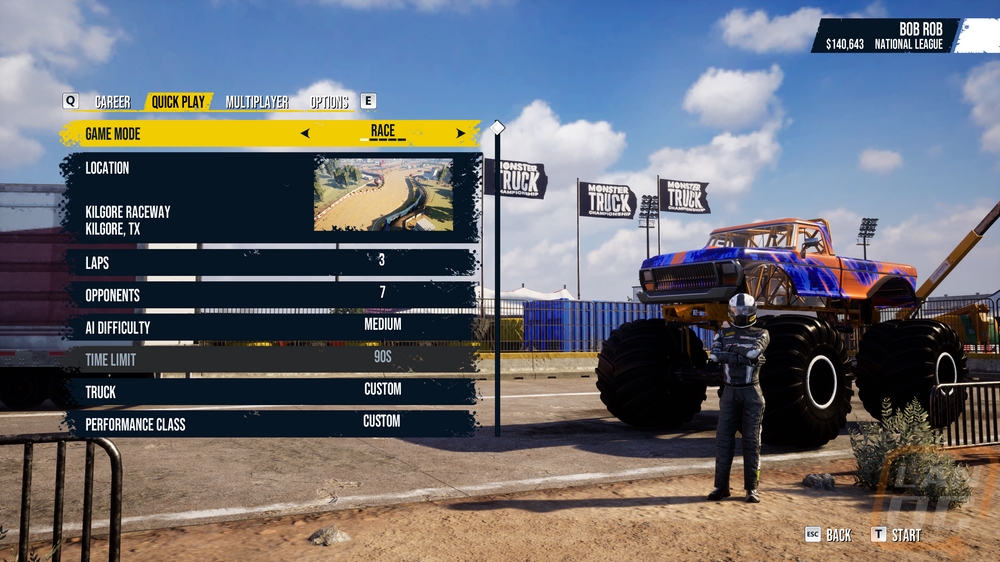 The multiplayer aspect is very similar to the quickplay mode. But sadly it is limited only to the race and to the drag races. I would have loved to see the freestyle and destruction modes included here. If for nothing else but to watch others do their tricks. Once you setup a race, you can setup the number of stages, add AI opponents to fill in any empty spots, and select damage and performance classes. You can also pick different maps for the stages and pick the number of laps. Checking this out pre-launch there weren’t any online games available to play. They have also integrated basic global leaderboards as well when you are in career mode to see how you compare to others. I did run into a bug here as well, when you are sitting in the lobby the game does fully load your GPU, but it doesn’t do this in the other menus. 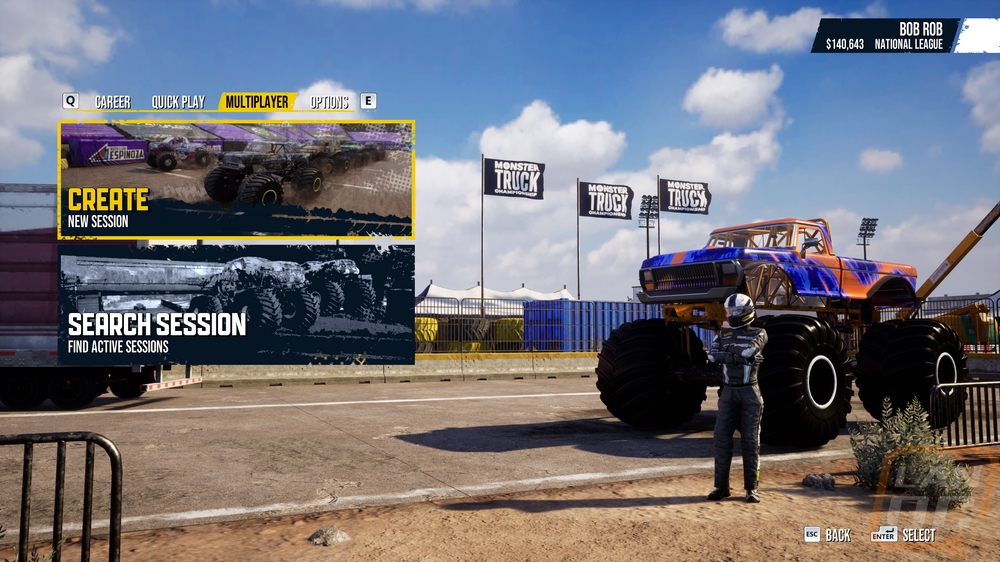 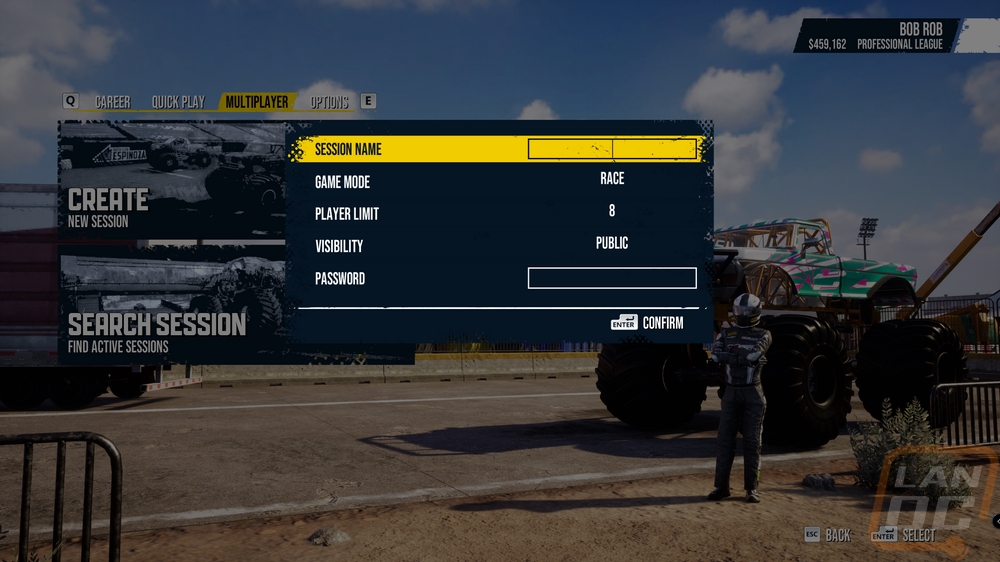 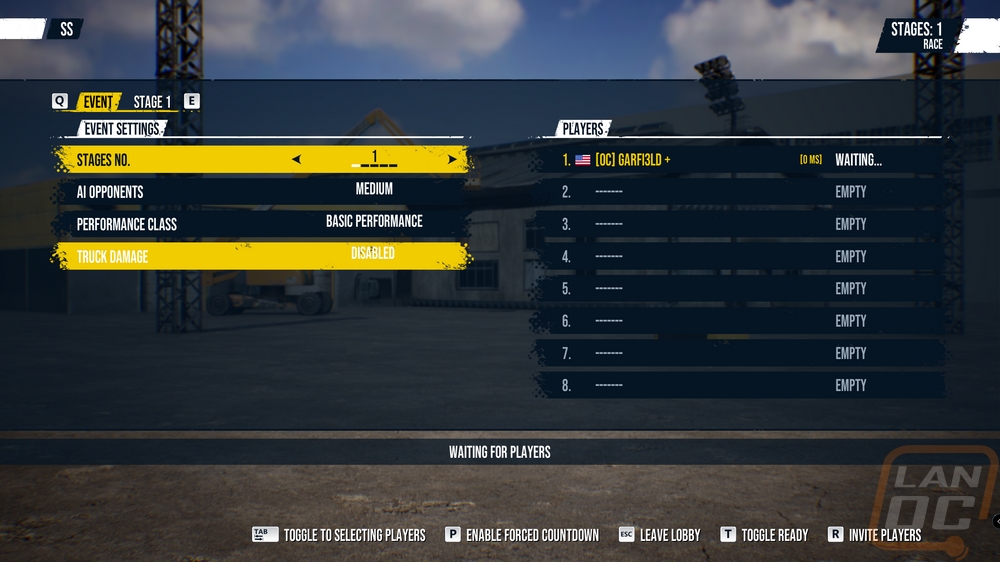 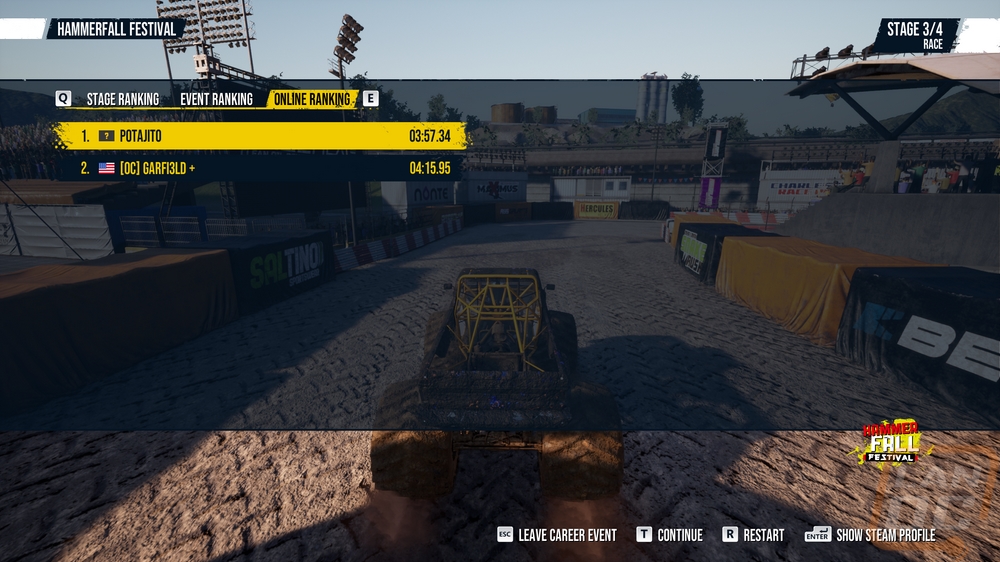 The main game mode and what I came to play was the career mode. This does integrate the same race modes that I mentioned in the quickplay mode. But you don’t just get access to any performance level, you start from the beginning. They have three different “leagues” The national league, professional league, and major league. Each of those has a whole list of events that you work your way through to earn upgrades to your truck (well the option to buy them, you still need to have the money as well which you win from events). Each event has its own “extreme” name and each is a series of races and stunts. Only a few are opened up at a time so you can’t skip through everything, this is your career, there aren’t any shortcuts! 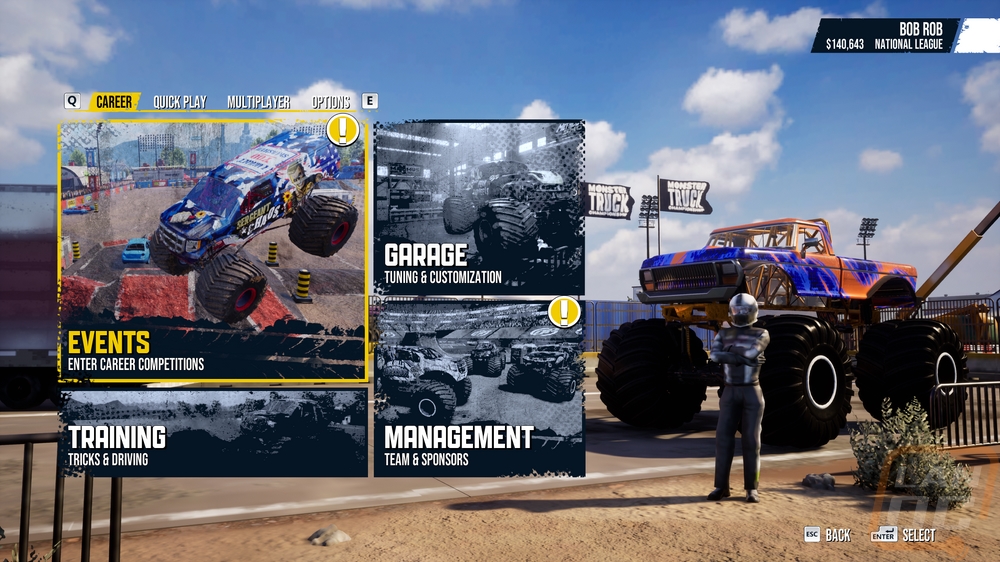 The management page lets you make changes to your team and sponsors. For your team, you start off with no one and have to hire people. Each person costs a specific amount to hire and they all have downsides and benefits. They may make you a percentage more in money or give you more power while making you lose less or have less traction. So you can pick and choose and just like in the events not everyone is open all at once. Then on the sponsors page, you get to pick out sponsor deals available to you at the time. Each company has different terms. They have a specific payout but they have a checklist of requirements that you need to do during your event or you lose out on the deal. This could be specific to a race or a stunt or both. They may want you to get first or like in the example below they want you to win one event without restarting or resetting. This is a cool wait to make a lot more money as you go through your career. 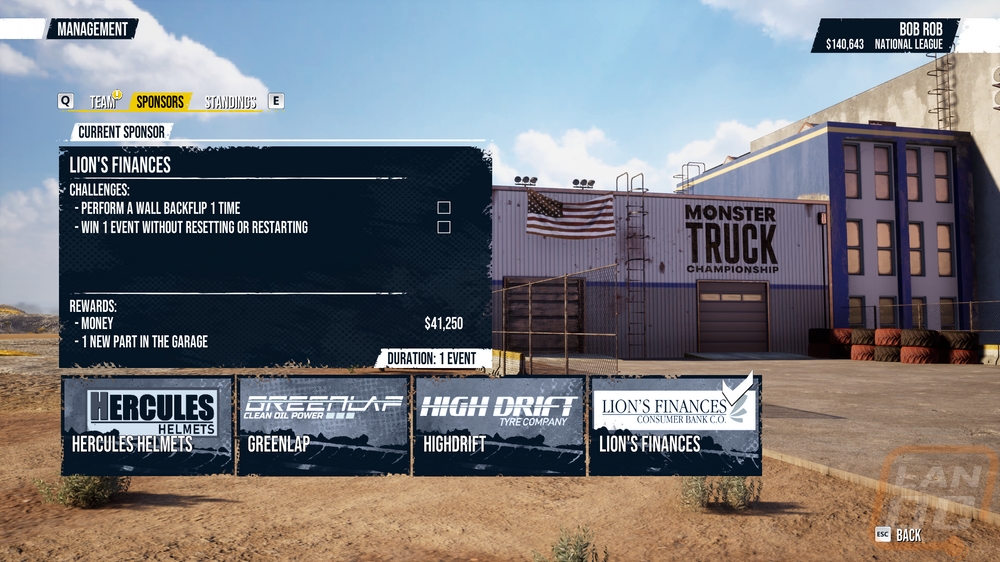 You can also look at the overall standings for the league you are currently in. Each event has points and they add up. This also breaks down your finances to see how much you have won from events and sponsors. How much you have spent on truck upgrades and repairs, and entry fees for the events. 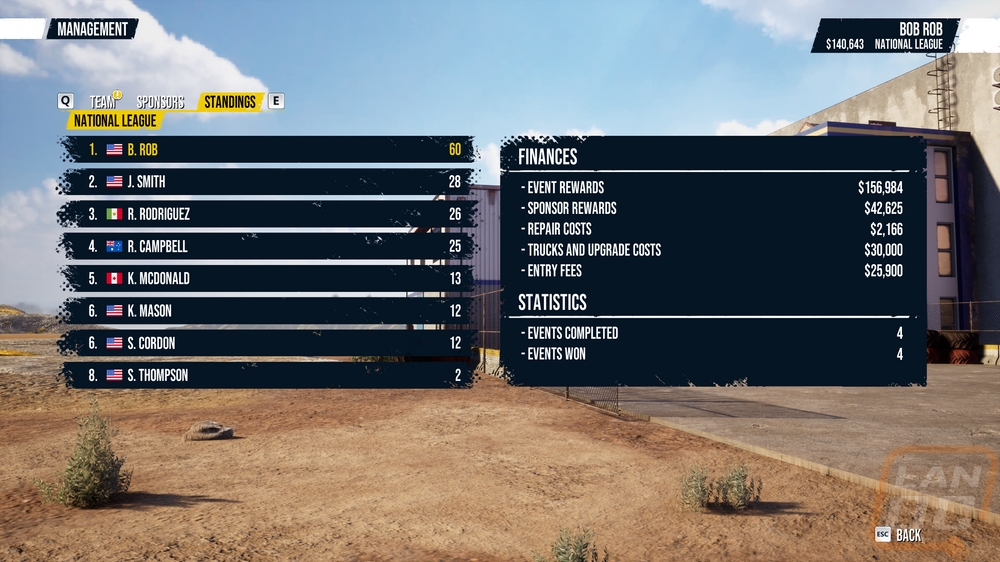 In addition to your staff members, the main way you change your truck performance is in the garage. Here you can upgrade all of the performance parts, appearance with things like wheels, stickers, paint, and even completely different bodys. There is also a tuning option where you can tweak things, you can do that between events as well. All of the options are slowly opened up for you by winning events and especially by fulfilling sponsor deals so you can’t just jump in here and change everything. There are a few basic bodys and styles available and you can change the colors completely at the start. But then you start to open things up as your career progresses. The engine upgrades specifically are tied closely to the different leagues. 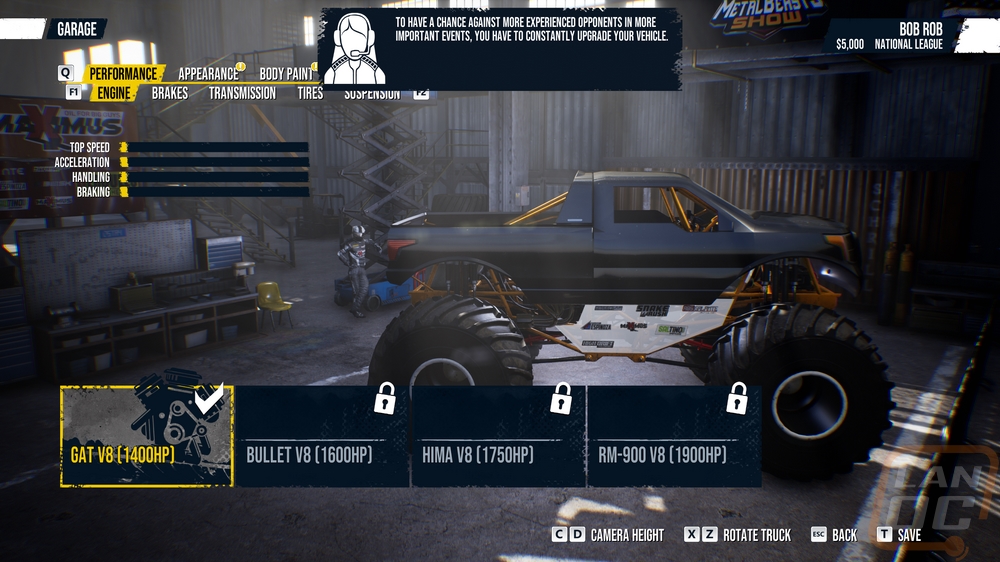 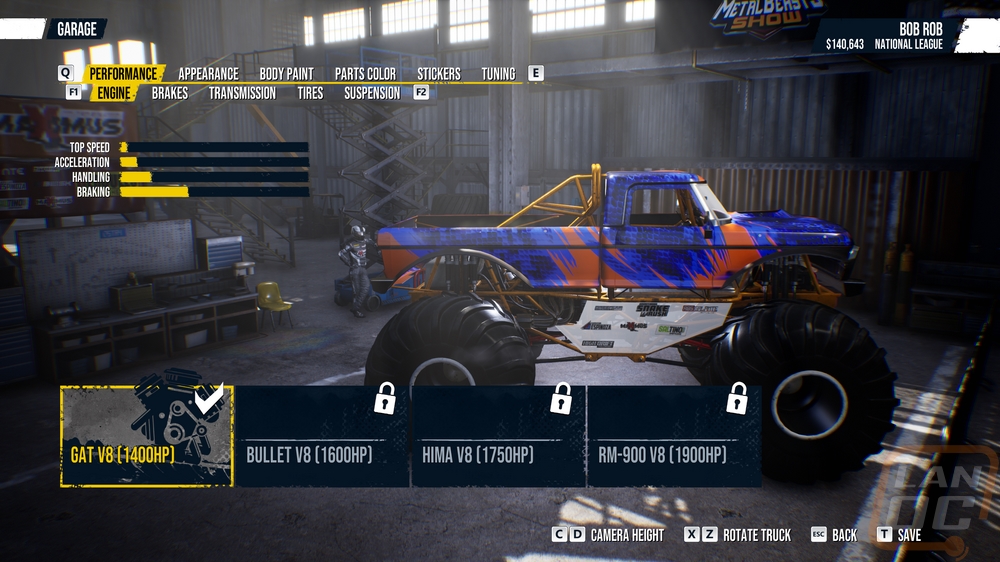 Racing through career mode was fun, but also a little repetitive. The repetitiveness isn’t a huge surprise because a lot of racing games follow a similar format (like the Dirt series) and it can sometimes feel like you are grinding. Especially where there aren’t a lot of maps which there aren’t. The arenas could use more track/destruction layouts and more backgrounds for example. Being able to mix those two up could make it feel fresher. But if you are just jumping in and playing from time to time and not trying to grind through the game the career race layout gives you a perfect 3-5 race series to run through with prizes at the end and longer-term career upgrades when you move up through leagues and as you get truck upgrades. 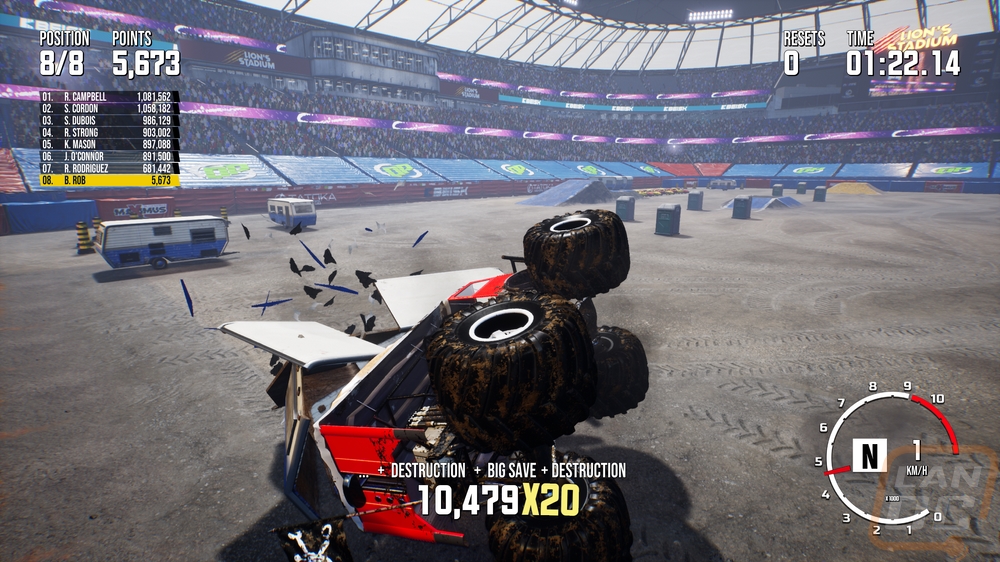 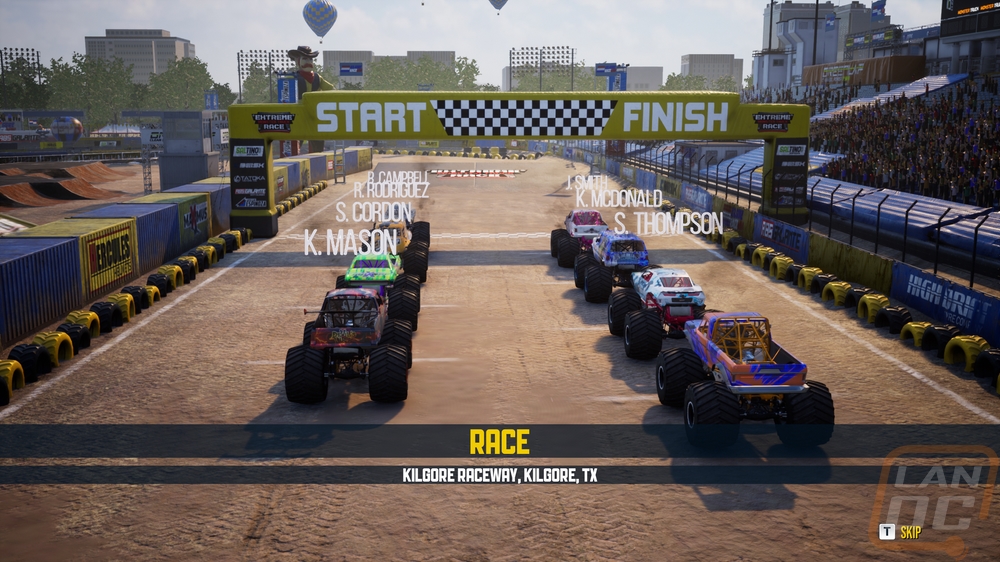 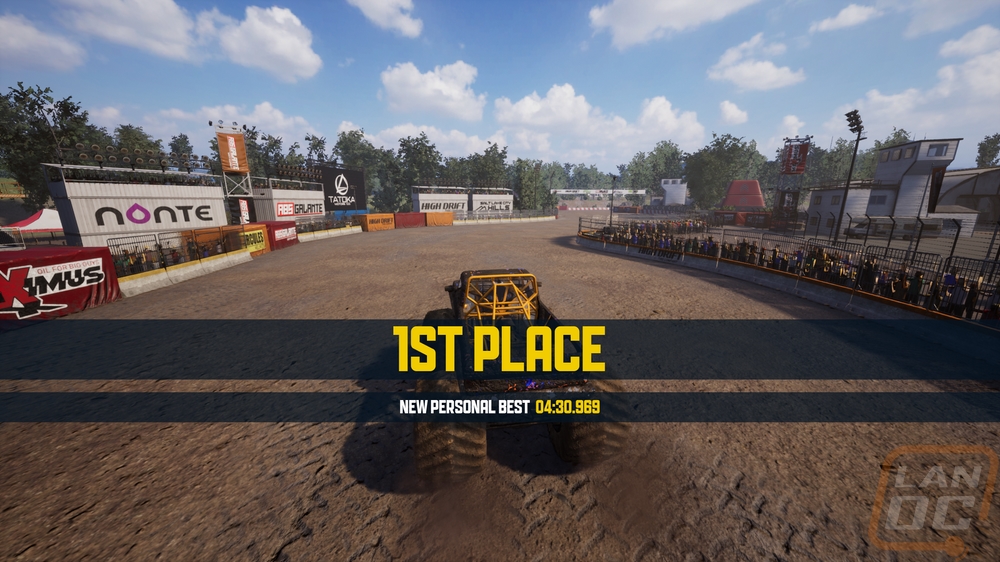 The display layout when you are racing is about what you would expect. In the top left you have your position as well as what lap you are on with a list of everyone in the race and their times which update as they reach checkpoints so you know how far they are behind you. Along the top edge, there is a percentage meter that shows you how far you are through the race, if the lap indicator isn’t enough. That helps the most with the single lap drag races. Then on the top right, you have your time and they also track if you have to reset which happens if you crash badly or rollover. The bottom right has a completely standard tach with what gear you are in and a speed which by default is metric but you can change to imperial. Then in the bottom left corner, you have a status indicator which if you have damage on will show all the damage you do to your truck as well as the smaller icons that show when the damage affects how your truck drives. 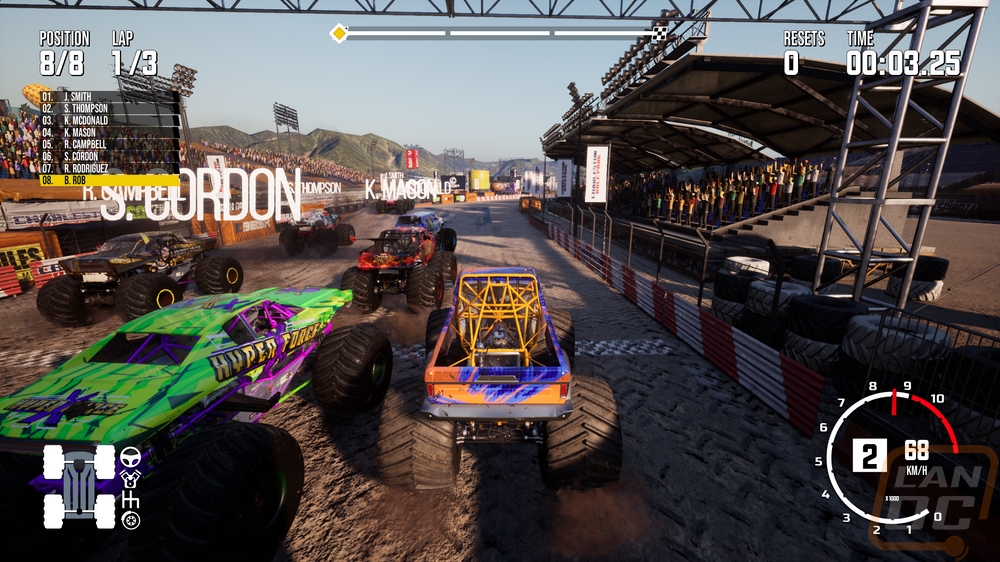 The gameplay menu is where you can change things like the truck's damage. You also have options for your camera angle and FOV as well as smaller details like if you will get camera shake. ABS can be turned on and off and you can change the transmission type and select if you want to use a clutch or not for manual. In career mode, you can’t change the difficulty without resetting your career. That changes the AI difficulty as well as turns on or off some of the driver aids as well. 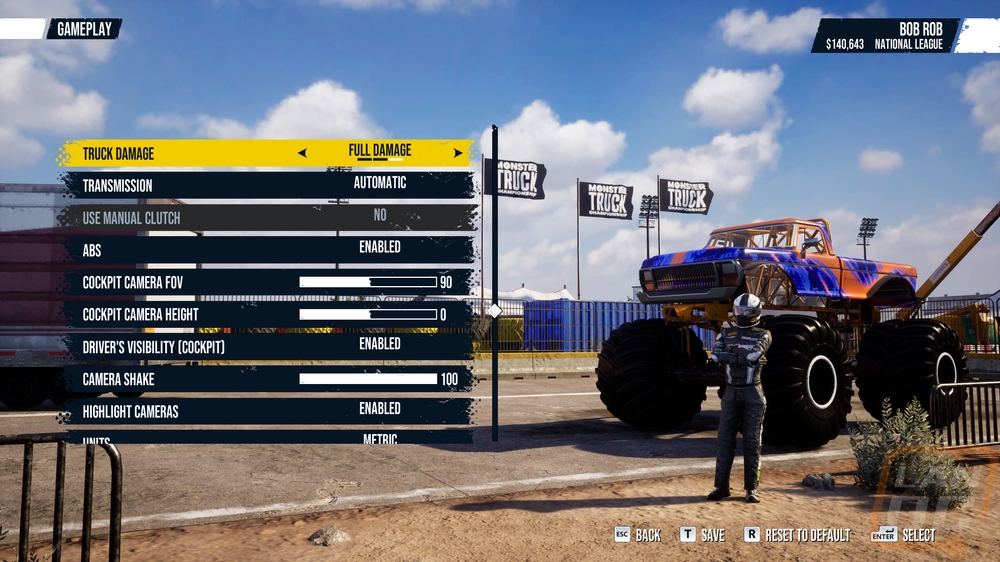