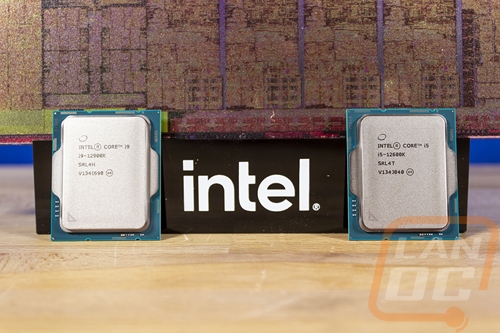 With GPU prices still out of this world, more and more people have been looking to use onboard graphics in situations where in the past they might buy a used video card or a low-end card. Those cards now are going for WAY more than they are worth though. For the 11th gen CPUs, Intel did update the onboard GPU and we saw a noticeable bump in performance. For these 12th gen Core processors, they have updated from the Iris Xe UHD 750 graphics to the Iris Xe UHD 770 graphics. But as I mentioned earlier, these are the same GPU design and same core count but with a bump in clock speed with the smaller manufacturing node. So going in I’m not expecting big improvements, but let's see!

My first test was using the older Cinebench R15 which has an OpenGL test. These results are the FPS at which the video is rendered and the clock speed bump helped but the faster CPU performance also played a role in pushing the two 12th gen CPUs up to the top here with the 12900K coming in 14 FPS higher than the 11900K even. 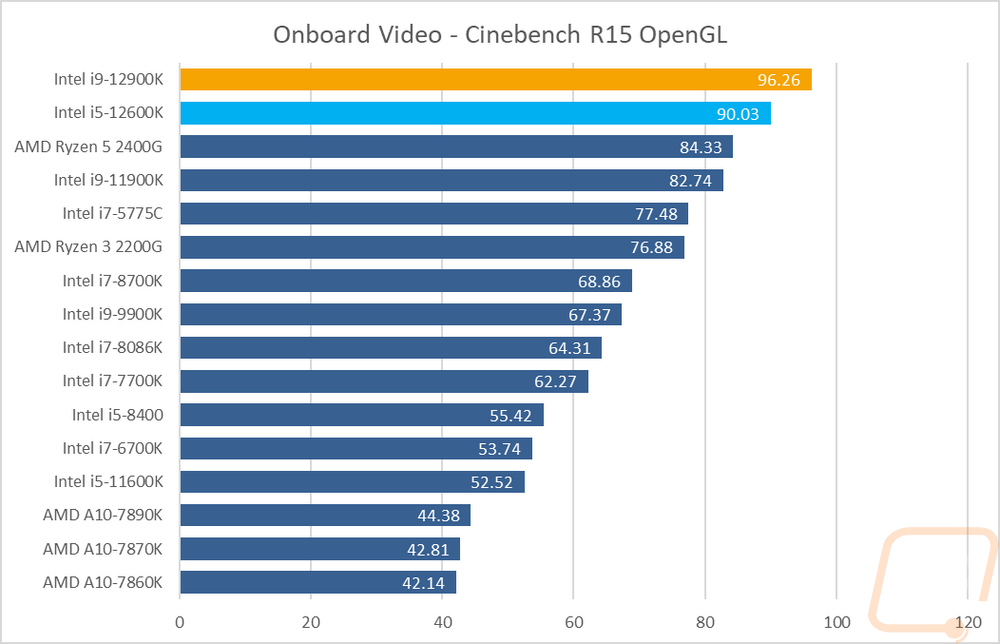 Next, I defaulted to the always consistent 3DMark with both the older Fire Strike benchmark and the newer Time Spy which is DX12. Both I only used the graphics score, not the total score to take the CPU performance out of the equation as much as possible. While Intel wasn’t able to catch up to even the over Ryzen APUs here, they did show a good bump in performance between both the 12900K and 12600K and last year's 11th gen CPUs. 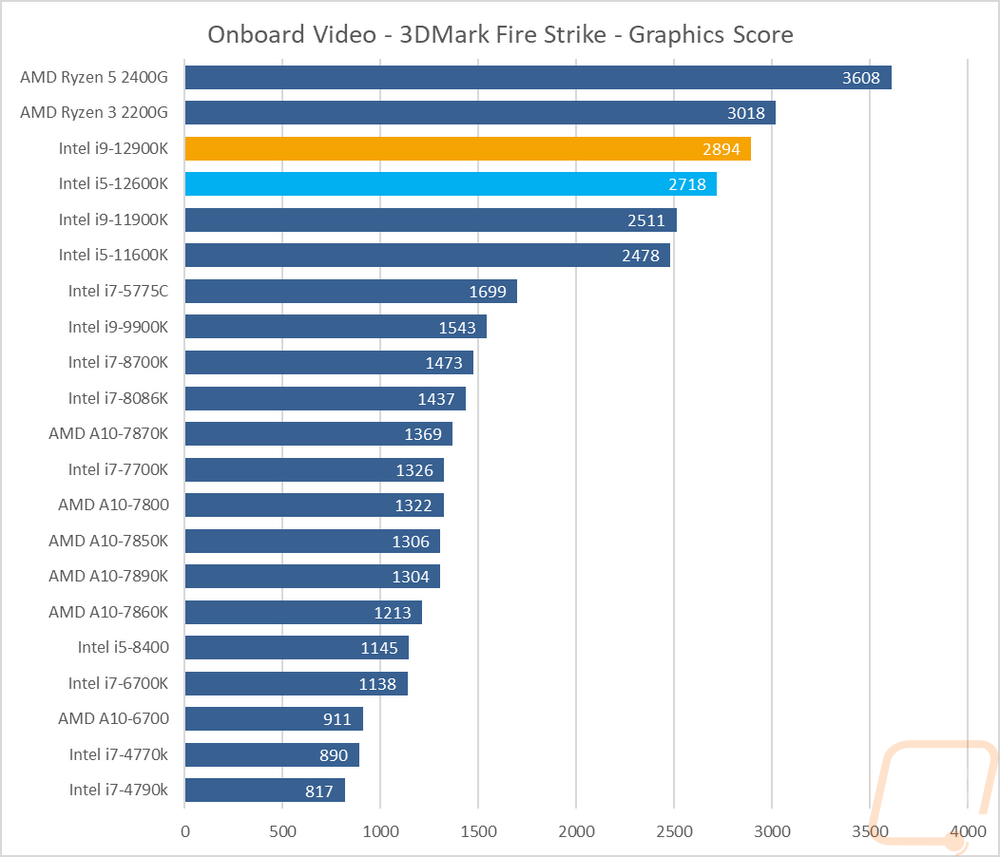 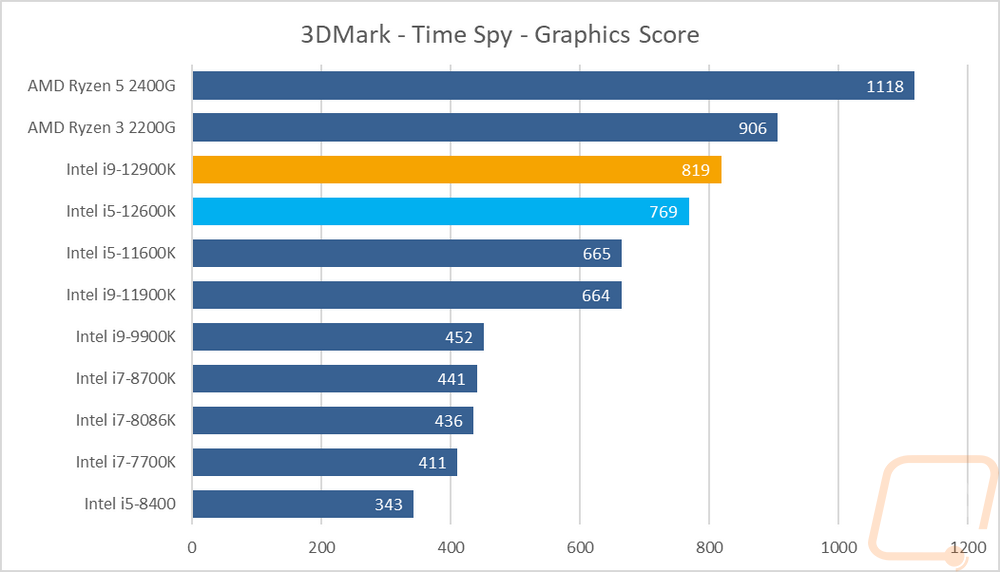 In Unigine Superposition I ran the 1080p medium detail and 720p low detail tests and the results were about the same. There is a clear difference between the 11th gen CPUs and the new 12th gen models but with the 12900K having a GPU clock speed of 1.55 GHz vs 1.45 GHz on the 12600K it sets the models apart a little more than last year when both were clocked at 1.3 GHz. 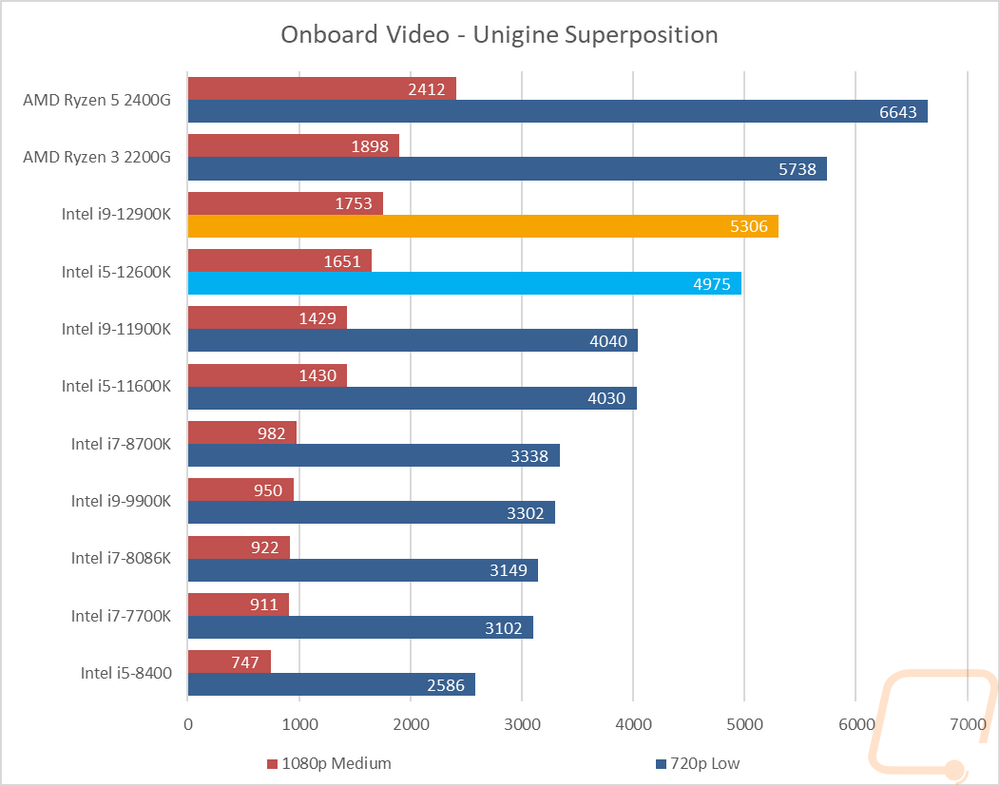 Then from there on, I jumped into game tests. Some of our tests are older games but I did also add in a few newer games as well to get an idea of newer games when tested at 1080p and low or medium settings. I was happy to see that Intel is finally in the 60+ FPS range for games like TF2 which also translates to reaching smooth playability with a lot of the “esport” titles. None of them have caught up to even the Ryzen 2400G, so let’s not pretend that Intel is leading the pack with onboard performance. But there have been improvements. I averaged out the results when looking at the 11th and 12th gen CPUs as well as the 9900K for a look back to 2018 so we could see the percentage improvement Intel has made. The gap between the 12900K and 12600K isn’t too large at 2 FPS but the 12600K is still 3 FPS faster than last year's flagship CPU and 12 FPS over the 9900K. 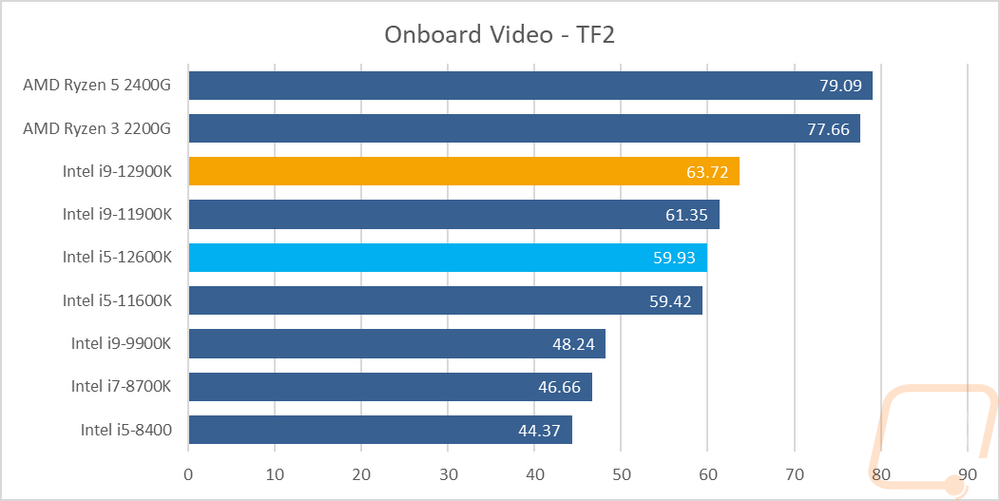 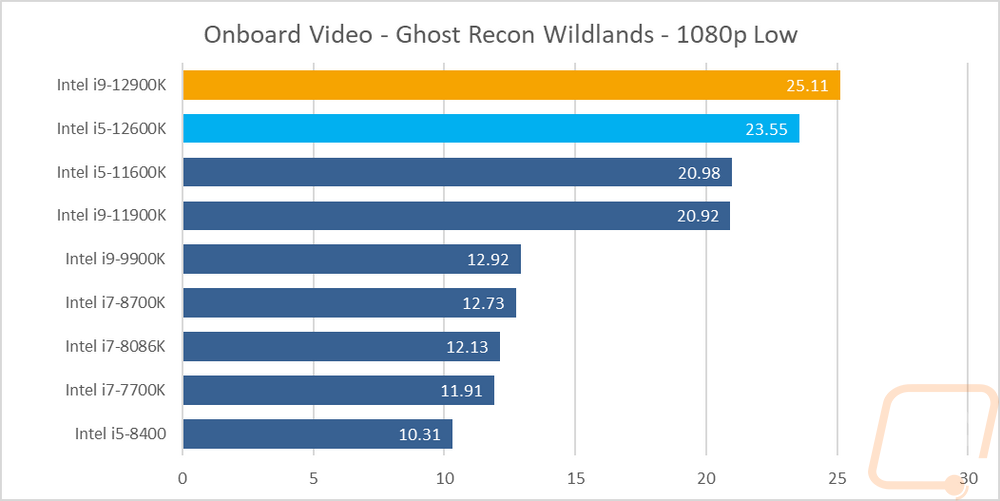 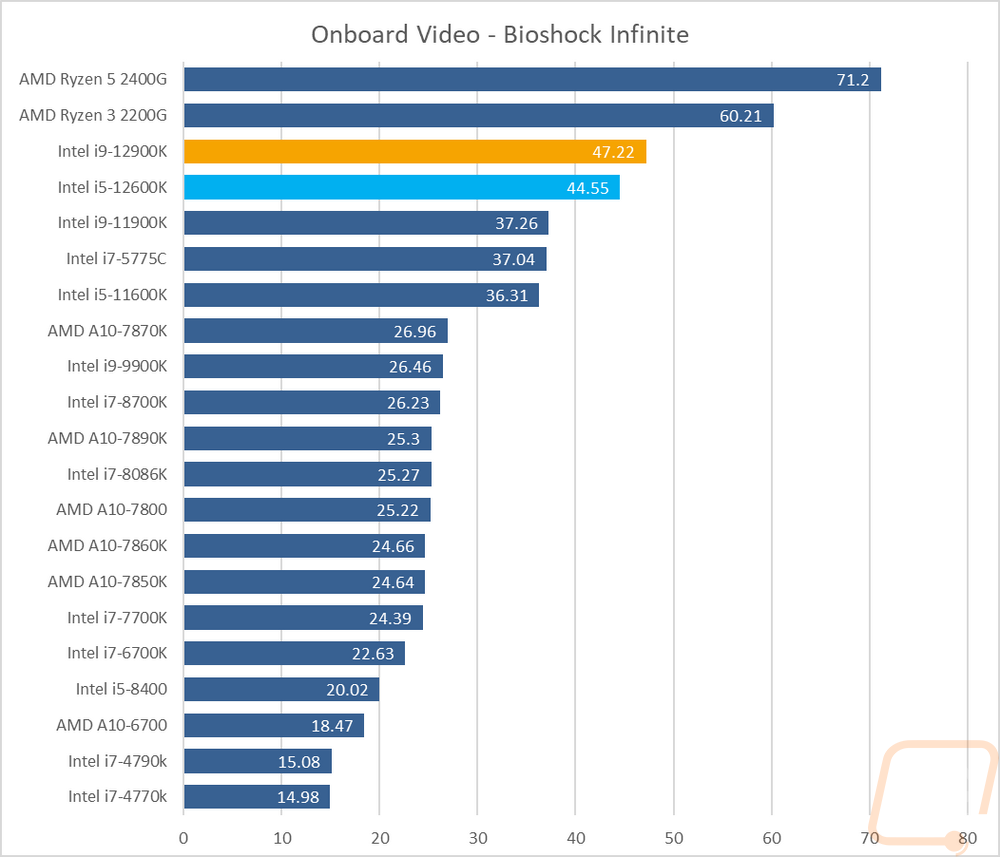 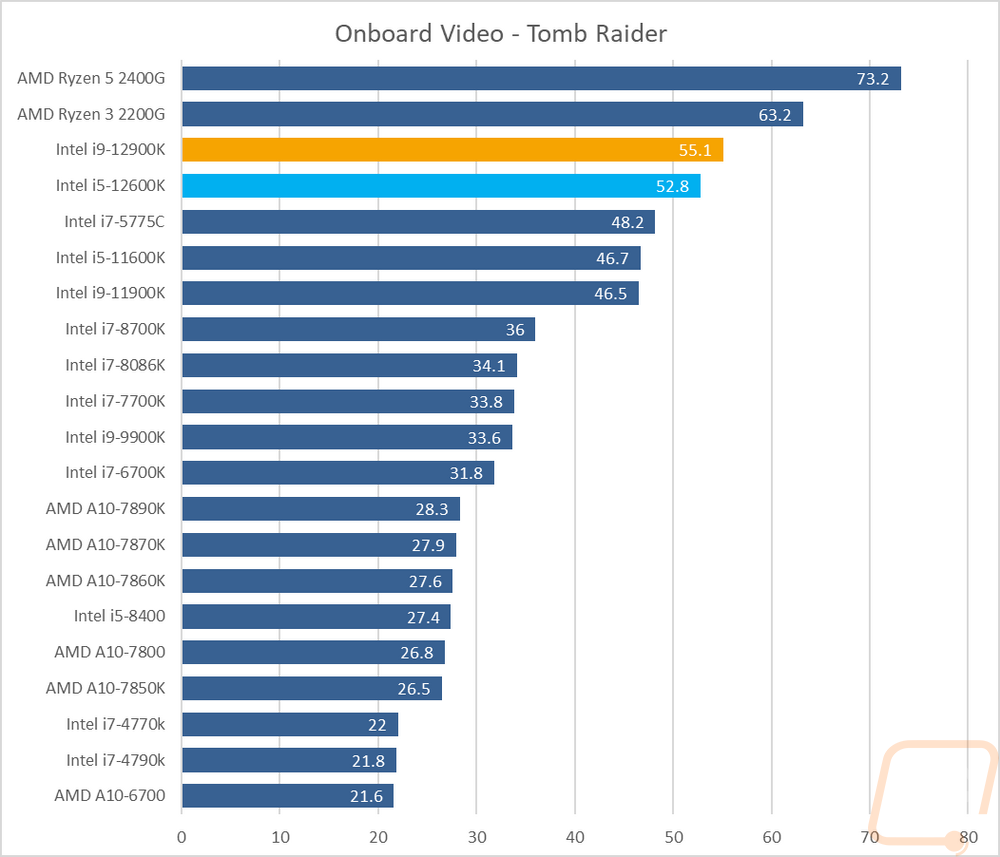 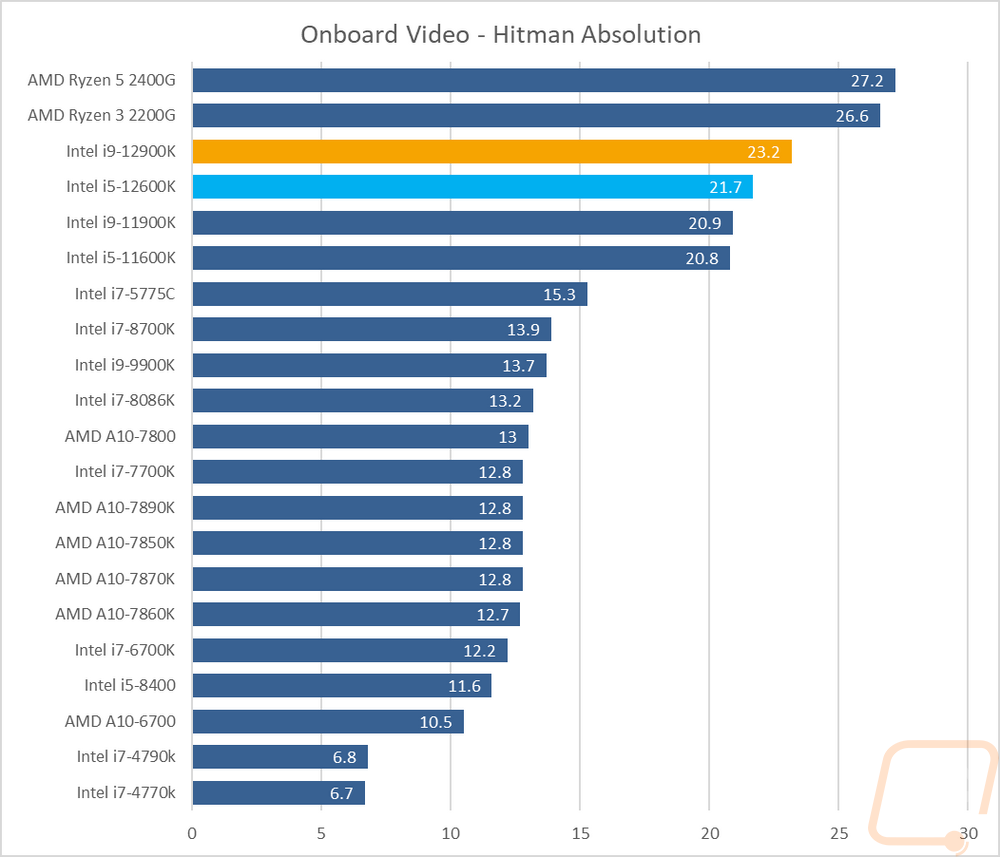 We have 962 guests and one member online