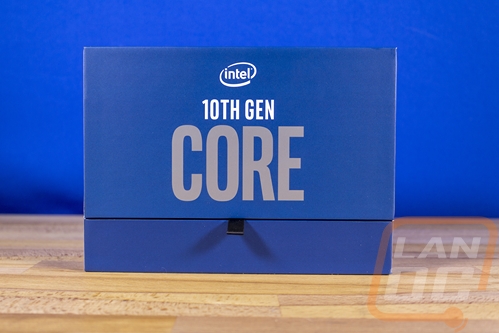 It’s that time again, today Intel has introduced their full new generation of CPUs, the 10 gen core CPUs for desktop. While some PC hardware is a little hard to find given the global COVID crisis, but with some people being away from work or working from home, the need/interest in upgrading hardware is there. Today we are going to check out the new lineup and trust me it is HUGE and then I’m going to check out the two CPUs that Intel sent over for testing. They sent over the i9-10900K which is their new mainstream/gaming flagship and the i5-10600K which is more of a mid-range focused CPU. The 10900K has two more cores over the 9900K and a touch more clock speed as well so it will be interesting to see how it performs!

So the new generation of processors continues the numbering scheme of previous generations but with the last gen being the 9000 naming the new CPUs now have an additional digit. This isn’t completely new as we have seen this in the Core-X lineup as well. This gets extra complicated once you also add in that they had the 10900X in the Core-X series were we now have the 10900K. So if you do end up shopping for the 10900K make sure it has that K at the end, not the X. Another carryover is the base architecture. It’s no secret that Intel has had a few issues that caused their planned move to 10nm. So this generation of CPUs is once again another refinement of the Skylake and is still on 14nm. Ryzen is now on 7nm putting Intel at a disadvantage. Being ahead previously has helped a lot along with these refinements to the current architecture. So let’s see what has changed this time around.

Intel once again is pushing how important frequency matters, which is true. Especially when you get into gaming. This has been one of their main advantages that Intel has had and they made it clear right away that they are only pushing things even farther. This time up to 5.3 GHz.

To help with the cooling without going down in manufacturing sizes they have gotten creative in other areas as well. They are soldering for STIM and they have also gone with a thicker heat spreader and a thinner die. 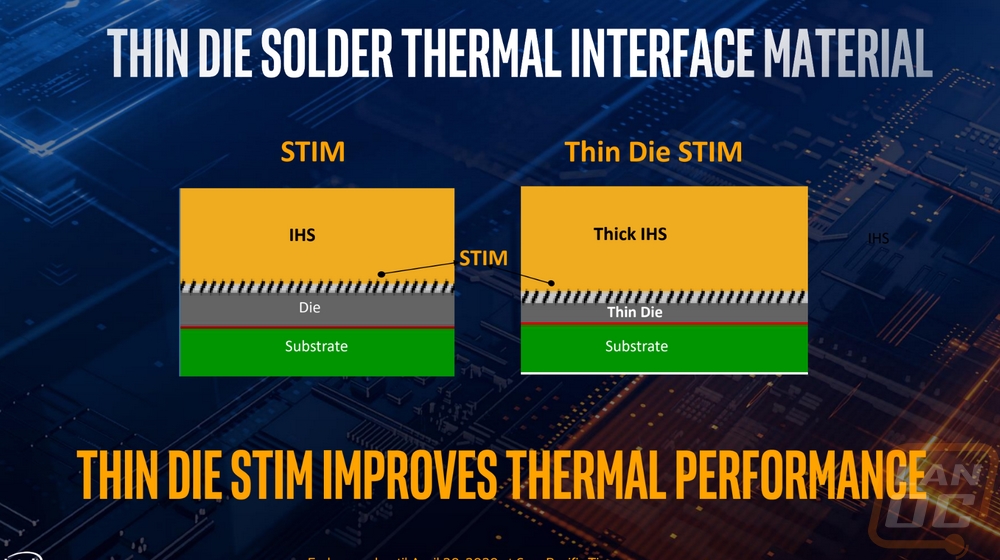 Okay, so what has changed? Well, Intel is advertising the i9-10900K as the Worlds Fastest Gaming processor and with that, the 10900K can run up to 5.3 GHz, has 10 cores and 20 threads. I honestly never thought that Skylake would be capable of that which is impressive. The big changes to the lineup include adding hyperthreading across the lineup all the way down into the i3 series. Memory support is also up with DDR4-2933 officially supported and not just an overclock. In combination with the new chipsets 2.5G ethernet connections are supported, not just an add on chip and Wi-Fi 6 is added as well. Both are huge for the future of networking. High-end boards have been getting 2.5G and 10G but I’m hoping this means we start to see it become standard, same with WiFi 6. That should finally start to bring 2.5G and 10G prices down for switches and more people can upgrade. The 10/100/1000 switches and routers have been the standard for a LONG time now and they are long in the tooth. Especially with WiFi 5 and 6 pushing speeds as fast and faster.

I mentioned before that the new lineup is huge and I wasn’t kidding. Below is the full lineup that Intel is introducing from top to bottom. This includes F series of processors which match their similarly named brothers only without integrated graphics at all. They also have Pentium and Celeron CPUs on the lower end and a whole series of T processors which are all locked at a thermal design of 35 watts. Pricing ranged from $488 for the i9-10900K down to $42 for the Celeron G5900 and G5900T. On the graphics side, nothing has changed, the 10900K, for example, has the same Intel UHD Graphics 630 that was added on the 7700K. They only have six CPUs in total that are unlocked, three if you don’t count the F series duplicates. That would be the i9-10900K, i7-10700K, and the i5-10600K two of which they sent for testing. The i7-10700K is extremely similar to last gens i9-9900K with its 8/16 cores/threads only with a hair more in clock speeds with the base clock now being up to 3.8 GHz vs 3.6 GHz along with the faster memory support and 5.1 GHz on the boost.

Sadly Intel didn’t send either of the CPUs in their original packaging. Just like last time around as well which is a bummer because, like what AMD has done with their Threadripper, Intel has had cool packaging on the high end. That said the press kit that they did send is nice looking. It has 10th Gen Core on the front and opens up to a blue acrylic panel with the Intel logo etched into it. Behind that both CPUs have small boxes with “Gaming Happens With Intel” under them. 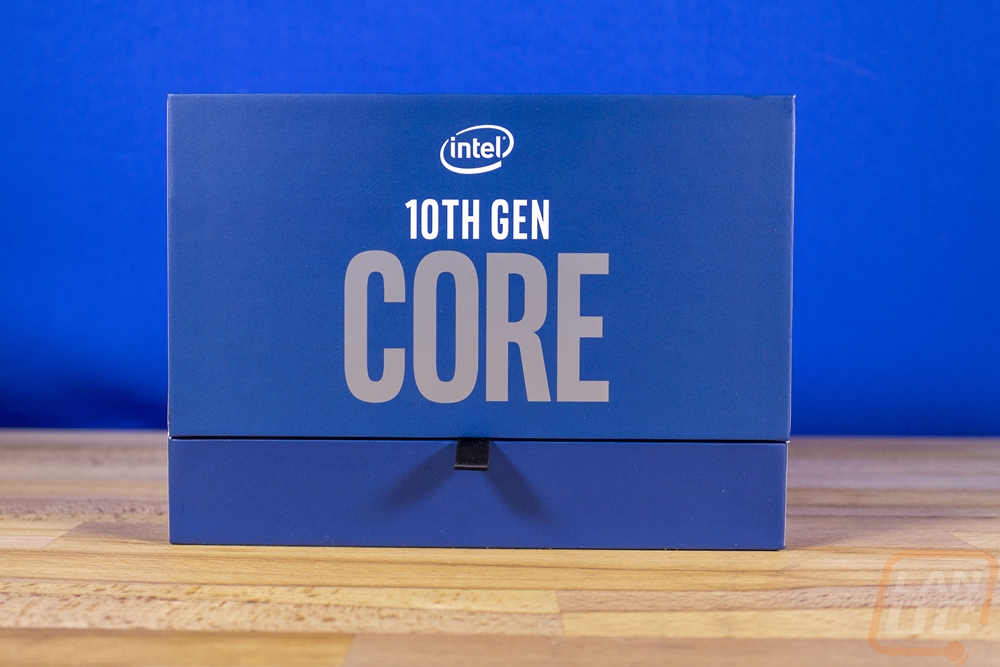 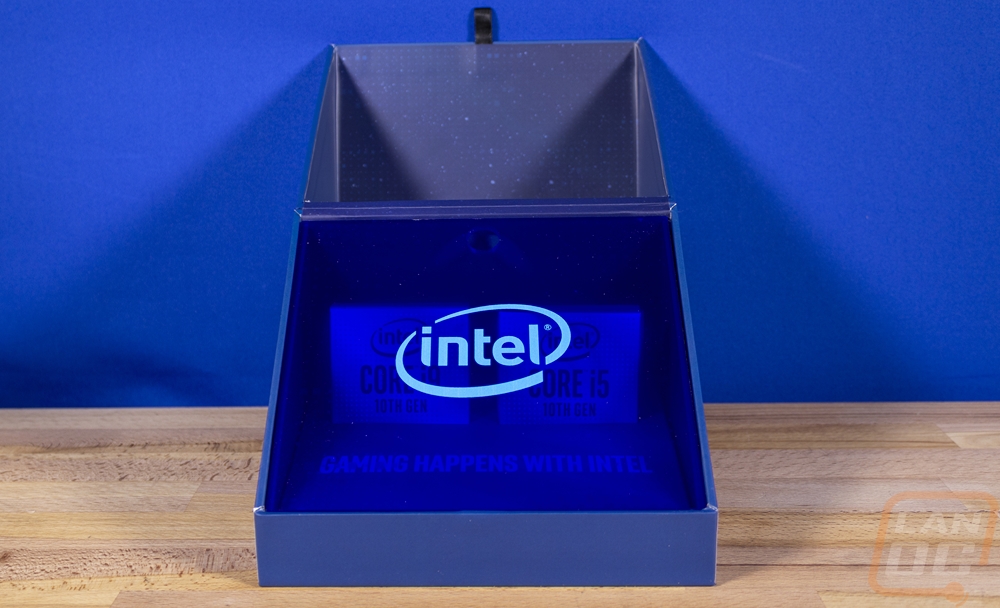 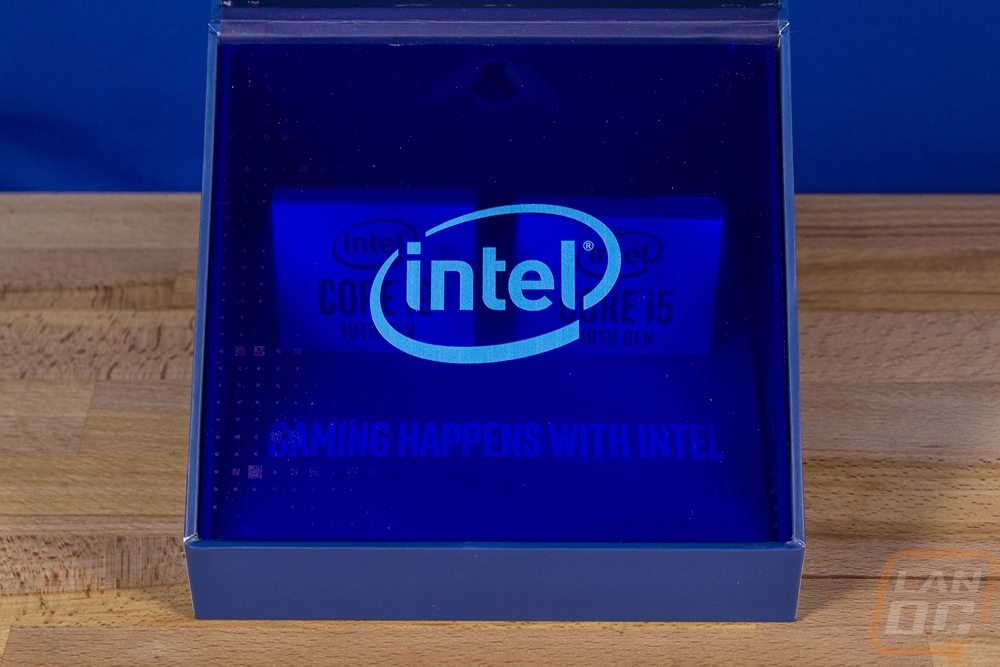 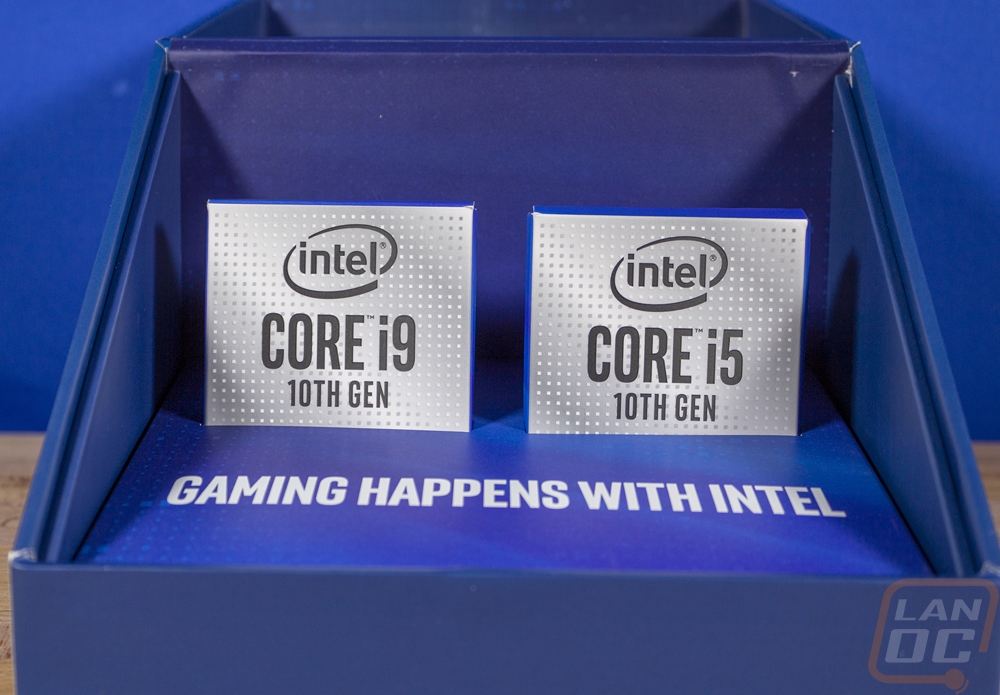 I mentioned it before, but the new CPUs do run a new Intel socket and this time around it isn’t the same socket with BIOS lockouts. The new socket is the LGA1200 and it has an additional 49 pins over the previous LGA 1151. The CPU package hasn’t changed at all with the exception of pin locations and the key bumps to make sure you don’t put the CPU in the wrong socket. The top still has the same etching as well with the Intel Core and the i3/5/7/9 and the model below that. Because the CPU socket size hasn’t changed the cooler mounting holes are the same as well which means all coolers will still work, going way back for all of Intel's Core series of mainstream CPUs.