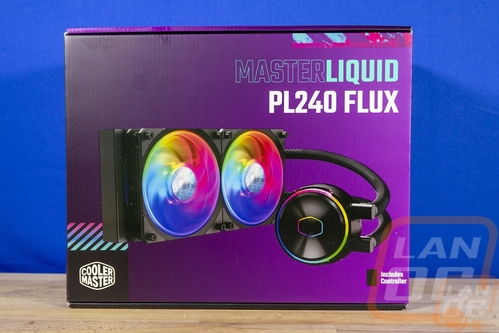 For the most part, AIO coolers all fit the same mold. They are almost always the same thickness when it comes to the radiator and fans and radiator size is tied to the number of fans you are running as well as the fan size. So the MasterLiquid PL240 Flux doesn’t stand out from the other AIO Kits tested there. It does have LGA 1700 support and even support for LGA 2011 and AMD’s TR4 as well. The only aspect on AIO Kits that differs a lot when it comes to fitment is the water block height and the MasterLiquid PL240 Flux didn’t do too bad there at 40mm officially and 39mm by my measurement. The H100i Elite was taller due to its LCD screen though the kit could be shorter if you went with a non-screen version. But the height is seen the most when compared with the MSI MAG Kit and the Sapphire kit which both are taller.

My first round of testing was taking a look at the overall noise performance of the pump and fans. For this, I run things in three different configurations. I test at 100% and 50% fan speeds to get a look at the overall range of noise levels possible. Then I also test under load using AIDA64’s CPU workload which is less demanding and more like what you might see when gaming. I then test all three situations from 18 inches away in the open air so keep in mind that inside of a case will be a little quieter, especially on the lower fan speeds. 100% fan speed tends to be loud in open air or on the top/front/bottom of your case because the fans do blow right out of the case. I test using A-weighted and C weighted on our decibel meter. A weighted is your normal OSHA range which ignores lower frequencies focusing on 500-10,000 Hz where C does from 30 to 10,000 Hz. On the A-weighted 50% fan speed test, the MasterLiquid PL240 Flux came in a little quieter than the Sapphire AIO and it was a little lower than the Sapphire on the C weighted as well but on C weighted the MSI cooler was still a little lower. Cranking the fans and up to 100% was louder, but Cooler Master did well here with the A-weighted being the lowest out of the coolers tested but with a C weight it was the highest by a small margin. Then for the last tests, which I consider the most important, we have the results when the CPU is under load. This is as loud as you should expect things unless you are overclocking and the MasterLiquid PL240 Flux was well below the competition on both results here.

I also wanted to check out the RGB lighting as well. This isn’t the most important aspect of the MasterLiquid PL240 Flux’s performance. But RGB lighting does add a lot to the overall cost of the cooler so it would be nice if it was worth it. The Flux fans are lit up better than I would expect given that they are running off the lights mounted in the center section only. Cooler Master does have options available if you also want an outer ring of lighting as well. I also dig the look of the lighting around the pump, with the addressable LEDs the inner logo being lit up stands out against the outer LED ring and the combination goes with the machined finish. 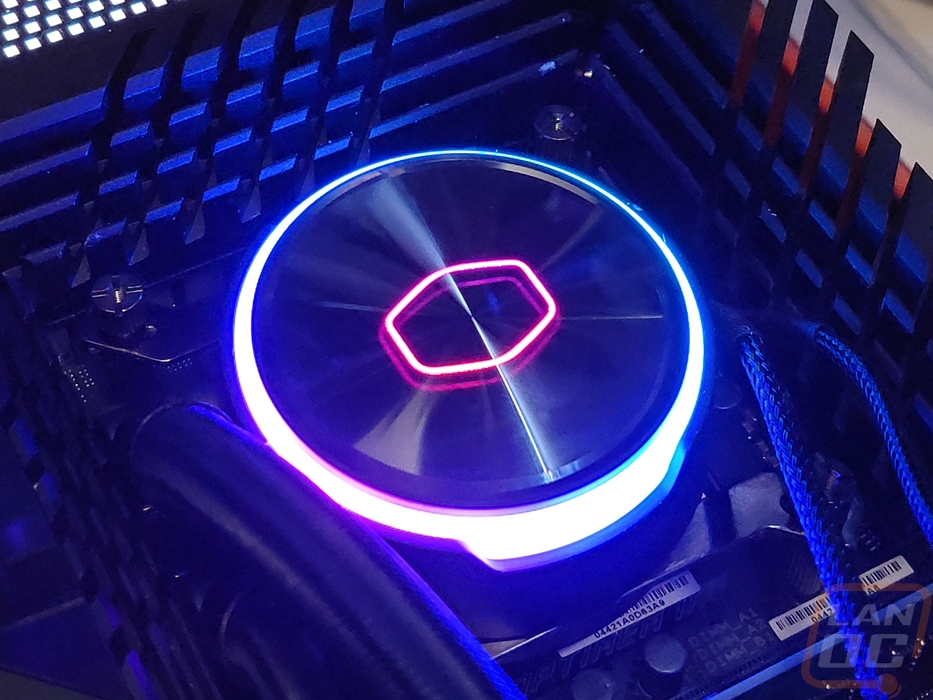 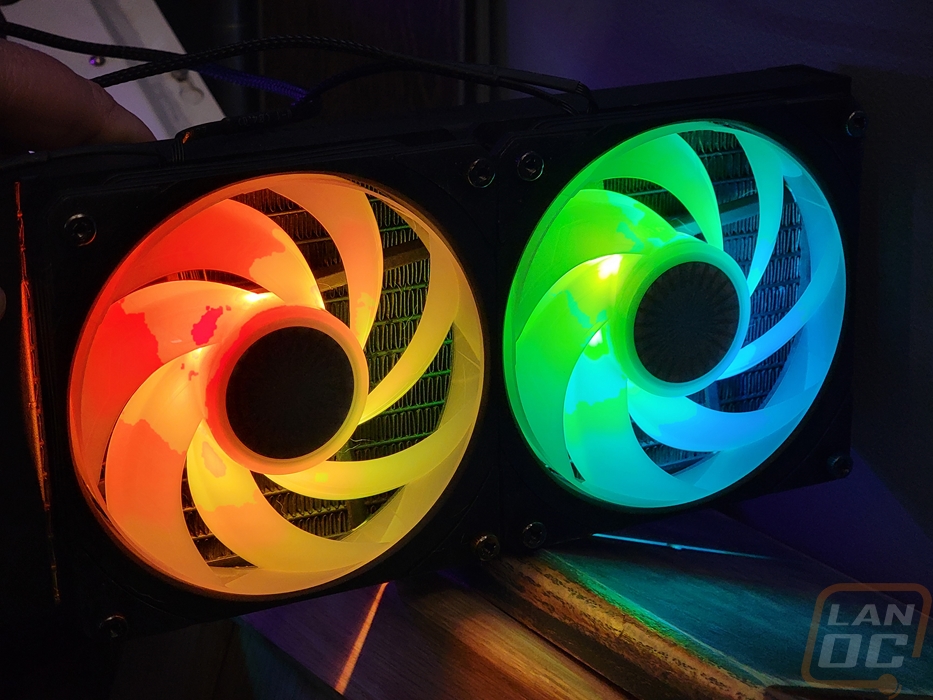 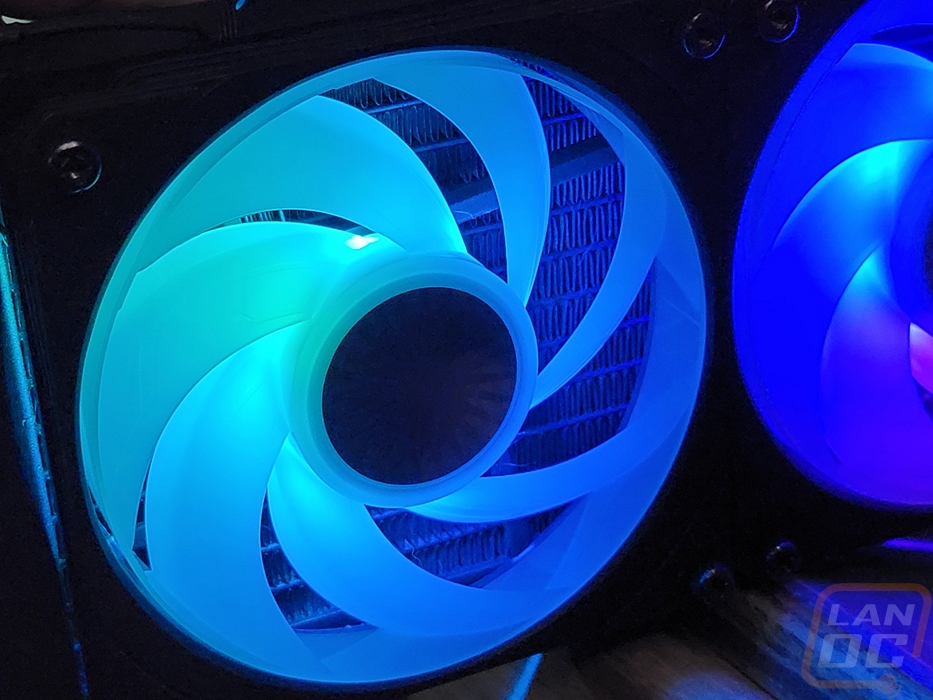 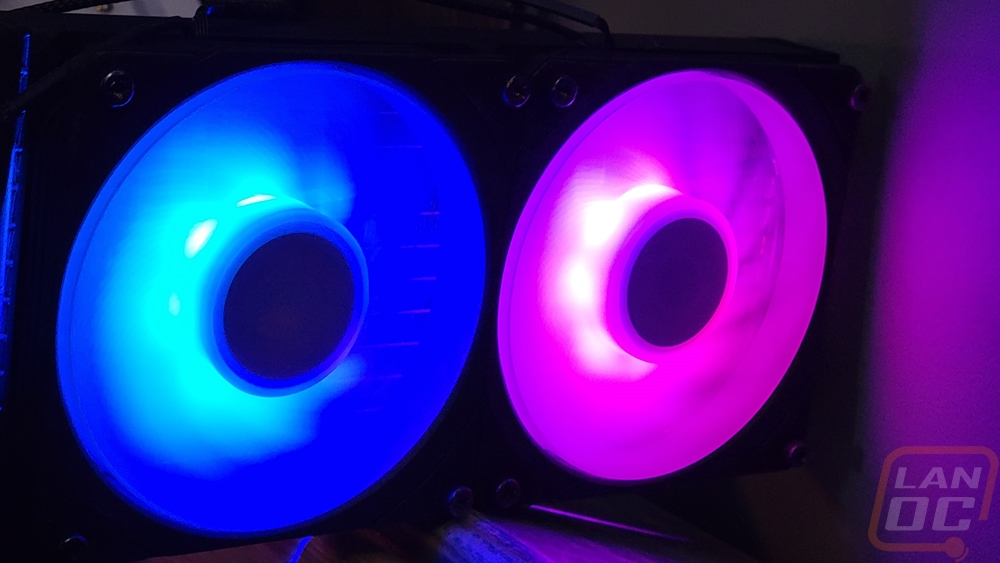 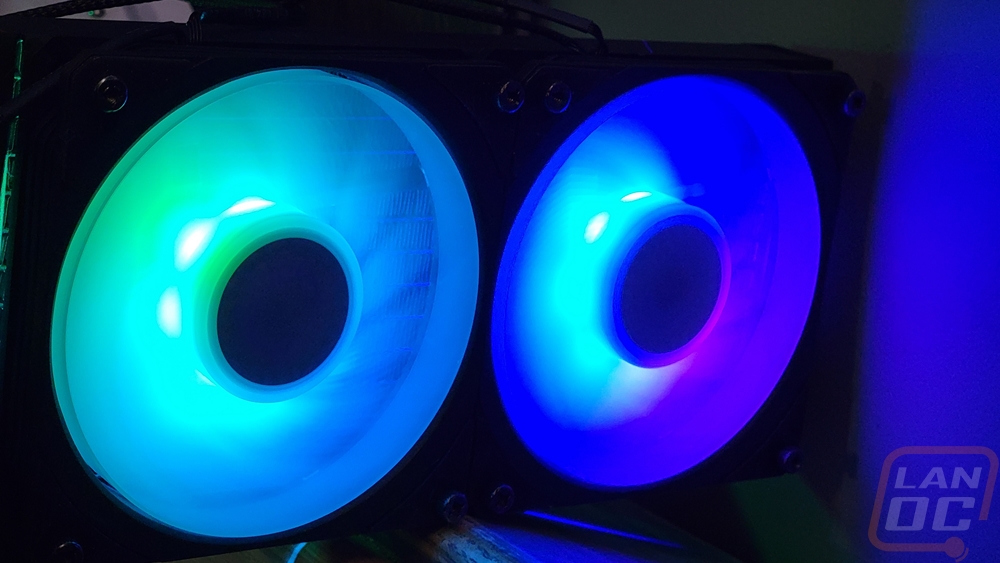 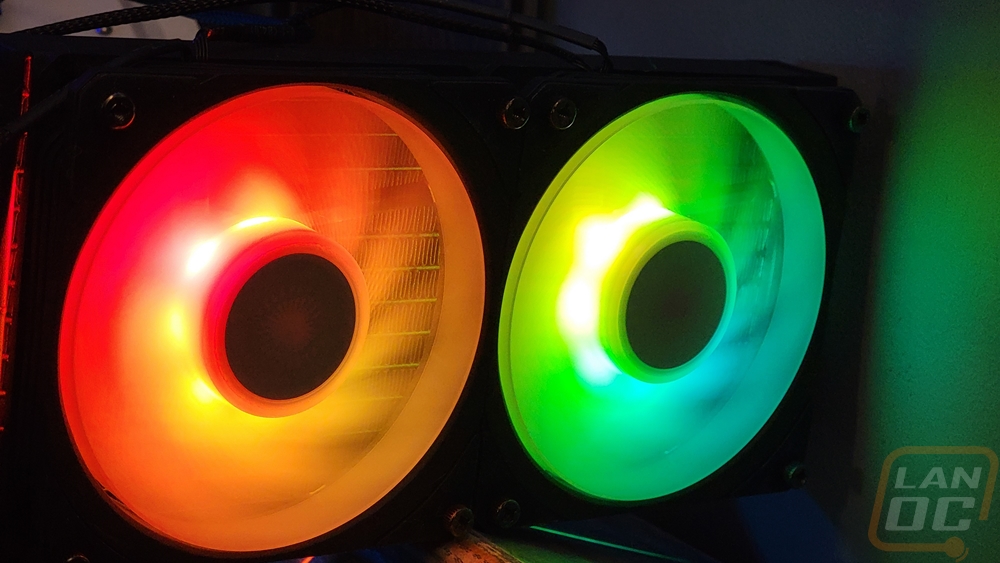 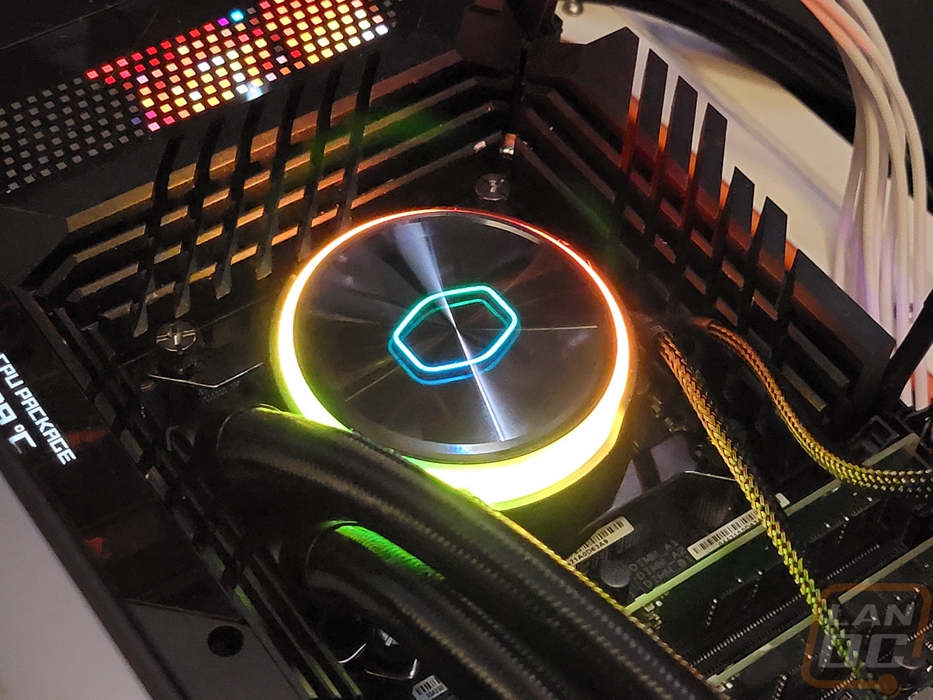 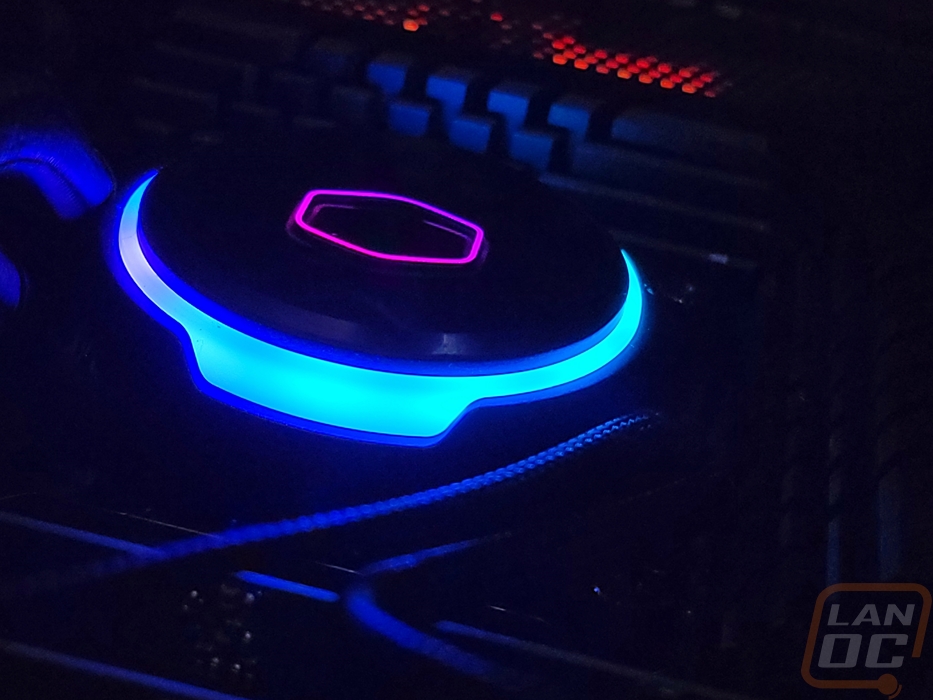 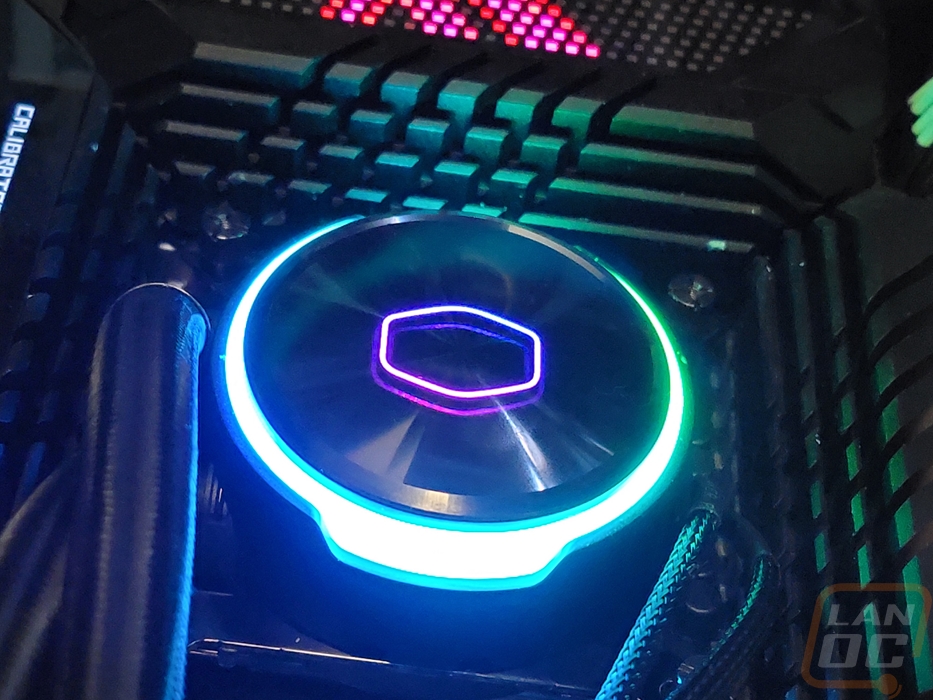 I initially had problems with the lighting controller included with our test kit which is why I’m only now getting coverage published weeks after the original MasterLiquid PL240 Flux launch. But when I did get a new working controller in, getting things rolling with the software was easy. You don’t have to worry about having the right program, Cooler Master uses just the one and it works with the MasterLiquid PL240 Flux as well as any other Cooler Master products. When you first install everything it will check for firmware updates, then after that, it will show up in the list with any other products you have hooked up at the time. You can pick between them on the listing to the left. Beyond that, the software does have profiles as well as integration to pick up temperatures, voltage, and usage for your CPU and GPU. 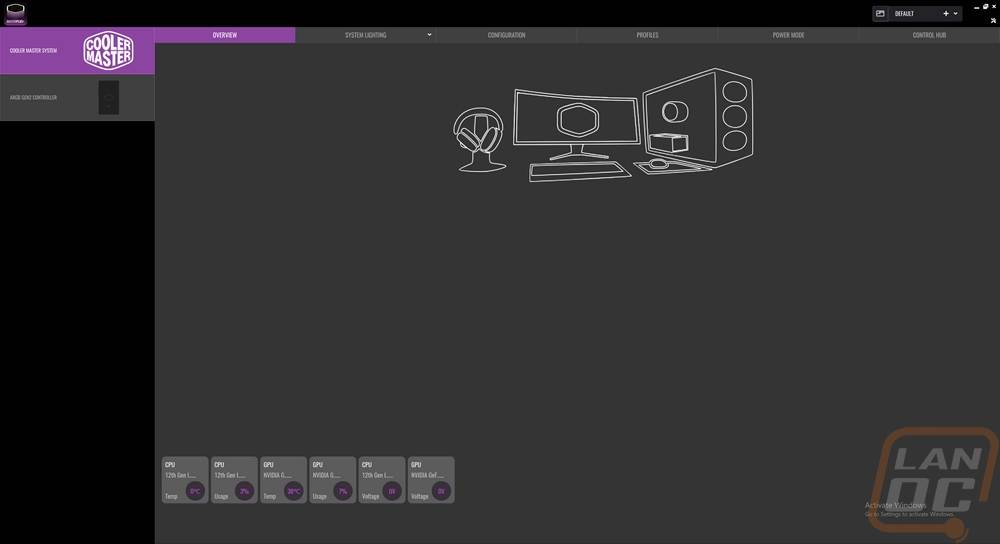 The software only picks up the controller but you can see what you have hooked up beyond that when you look on the custom lighting page. This does show the third fan for the PL360, so for the PL240 like ours, one of the four devices won’t do anything. 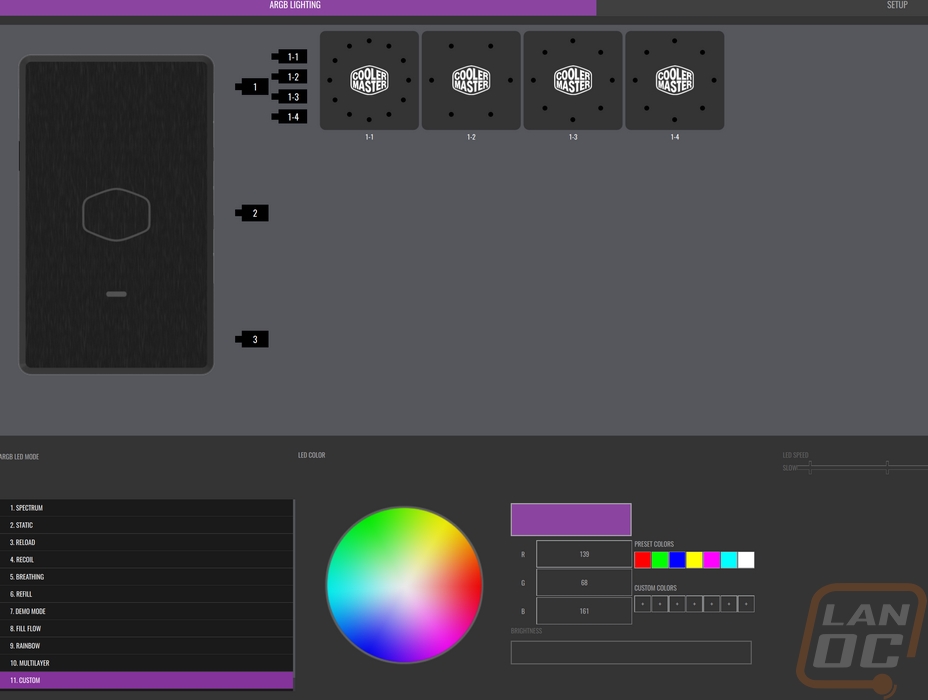 Beyond setting up custom lighting, each of the other lighting effects does have at least a few options that you can change. For some, it is only the brightness levels, but others let you adjust effect speeds, colors, or even setting the colors to be random. I’ve included screenshots of all of the effect options below. 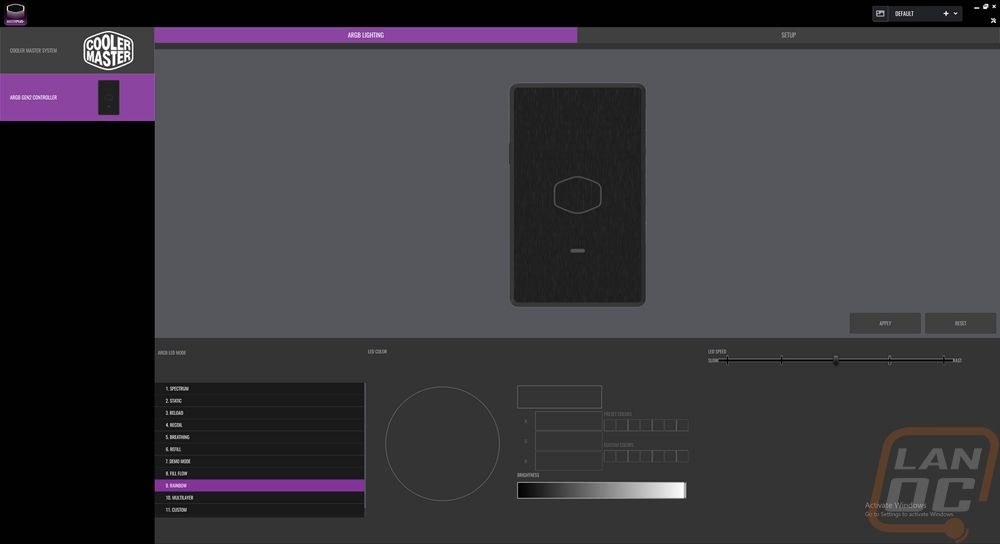 We have 1134 guests and no members online