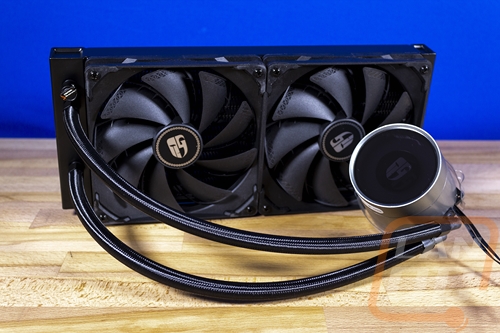 Of course, cooling performance is important, but it isn’t the only thing to keep in mind when picking out your cooling. Fitment is important in smaller builds and noise is important at least to some people, myself included. Now for the fit, I can’t test the Castle 280EX in every case. What I have done is just kept track of the fit of all of the air coolers and AIOs tested so far. AIOs in general are large, but smaller cases that are designed to fit them can effectively use the space. The 280EX specifically is more likely for larger cases that use 140mm fans. The design means memory fitment isn’t an issue, the pump doesn’t hang over past the CPU socket but I will say that the pump is especially tall. Just comparing with the H100i, it is almost twice the height. So keep that in mind, it shouldn’t be an issue in anything but SFF cases at least.

Then for noise testing, I ran three tests using our decibel meter setup 18 inches away from our open-air test bench. I tested the noise with the fans and the pump set to 100% fans peed, 50% fan speed, and for the third test, I ran the test while doing the CPU load test in AIDA54 when I tested with the 3900X. The last test gives us a look at the overall noise level you should expect in normal use. Both of the AIOs are a lot louder than the air coolers I tested but the 280EX did a good job in the load test and was quieter than the H100i in all three tests so I would still consider it loud but less loud than some other AIOs.