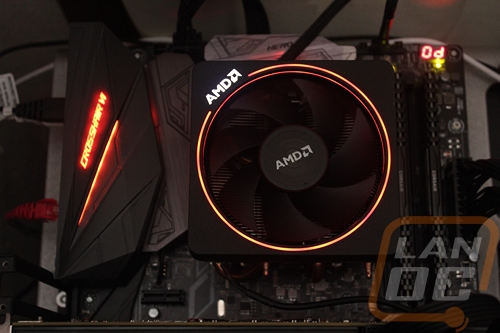 So the performance of stock coolers isn’t normally a big concern, they typically get replaced anyhow but with RGB lighting and coolers that aren’t tiny, I was curious how they compared with the Noctua NH-U12S that AMD provided with their review kits and that we have running on all of our testbenches. To put them to the test I grabbed the newly introduced Ryzen R5 1600X with its higher TDP and tested all three on it. To heat things up I used Prime95 running the small FFTs setting and I tracked the numbers with HWiNFO using the Tdie reading to avoid all of the 20-degree offsets that some of the CPUs including the 1600X have. Here is the breakdown of what I found. The Noctua cooler ran the coolest, that wasn’t a big surprise, but I was happy to see that the Spire was able to handle the higher temps of the 1600X even though it isn’t available with it. The Wraith Max did better, falling in between the two.

Then to round things out I also busted out the decibel meter set to slow mode and A focused results and picked up the noise from each cooler with the fan turned all the way up. When running at idle all three were extremely quiet, it wasn’t really worth the time to track those results. The Noctua once again was quietest but the Spire wasn’t as far behind as I expected. In fact, both coolers, with the fans cranked, were about where you would expect a lot of the aftermarket coolers to be.

The results together paint a good picture. Obviously going with an aftermarket cooler is still the better option, but it's going to cost more. Especially if you go with a quality one like the Noctua NH-U12S. The Spire and the Wraith Max are both great options for someone who wants to wait a little while before upgrading later or for anyone who isn’t planning on overclocking. You end up with a quiet cooler with decent cooling performance. The Wraith Max and the Spire RGB also add the awesome lighting effects.

You might call him obsessed or just a hardcore geek. Wes's obsession with gaming hardware and gadgets isn't anything new, he could be found taking things apart even as a child. When not poking around in PC's he can be found playing League of Legends, Awesomenauts, or Civilization 5 or watching a wide variety of TV shows and Movies. A car guy at heart, the same things that draw him into tweaking cars apply when building good looking fast computers. If you are interested in writing for Wes here at LanOC you can reach out to him directly using our contact form.
Discuss this article
Log in to comment
Posts in discussion: Ryzen Stock Coolers