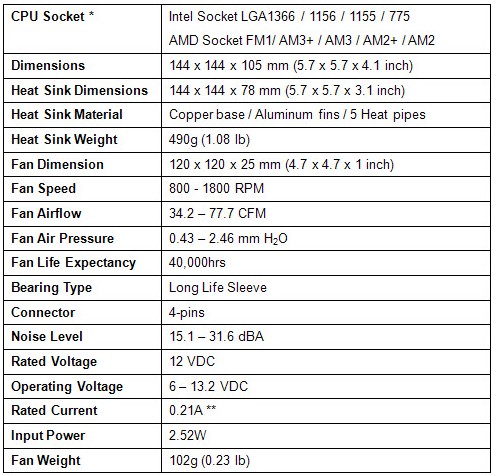 The GeminII S524 came in the usual maroon and white Cooler Master box.  On the front we can see a picture of the cooler, on the back some features in various languages, and on the side a list of the specifications. 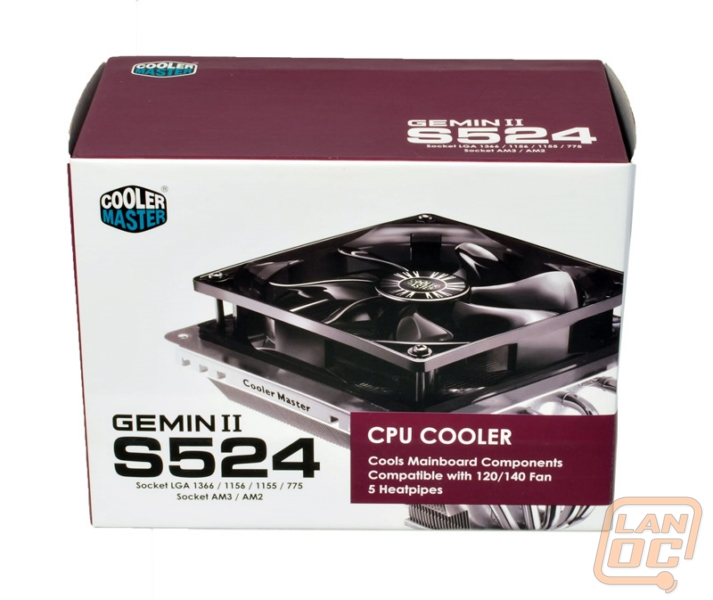 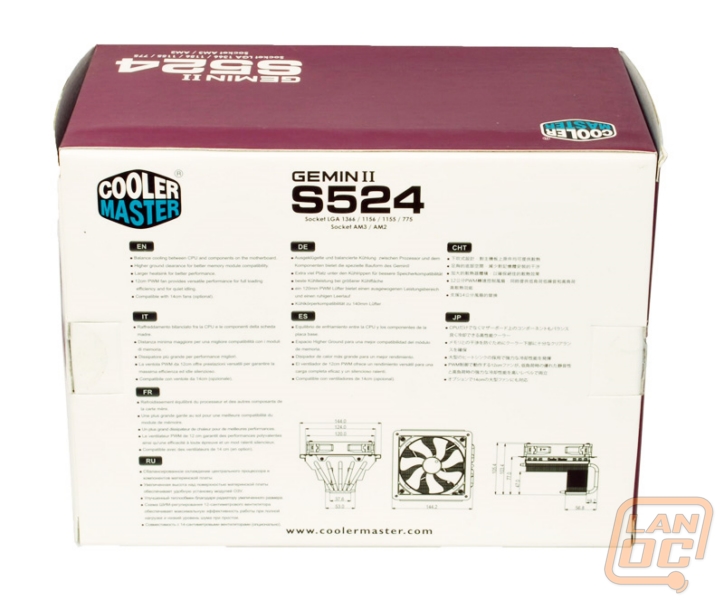 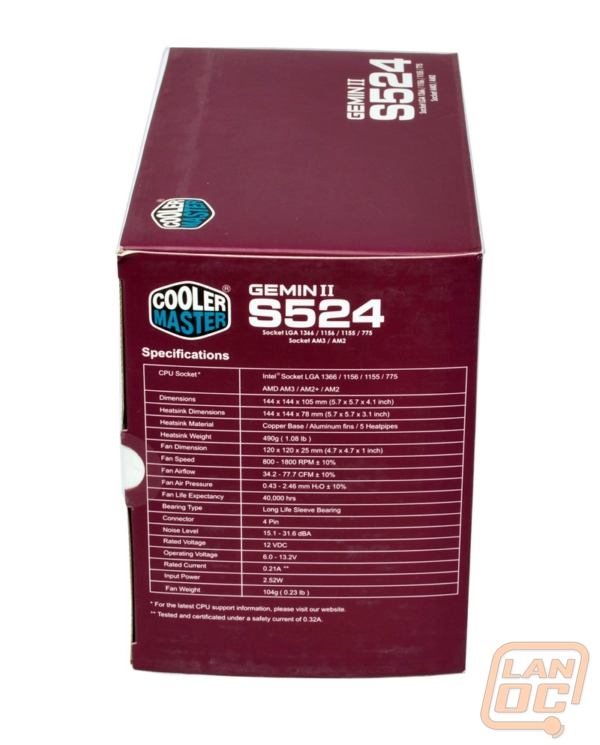 Opening up the box the cooler came well packed in foam with both AMD and Intel mounting hardware and instructions. 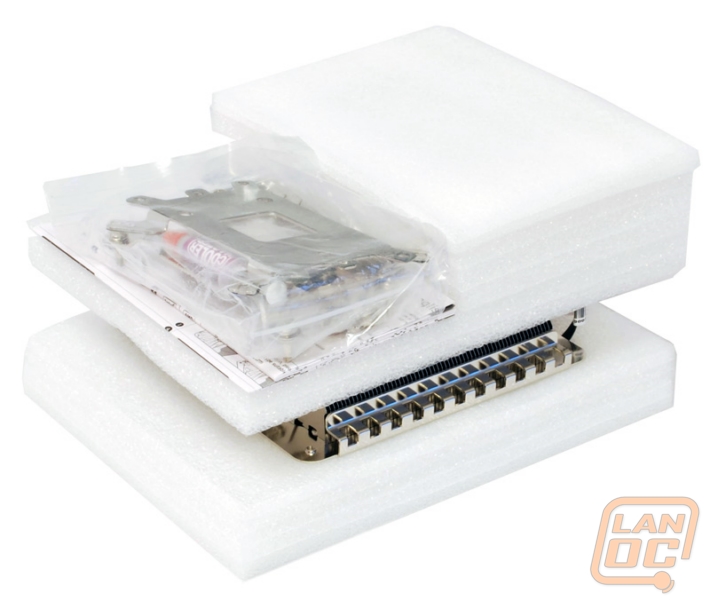 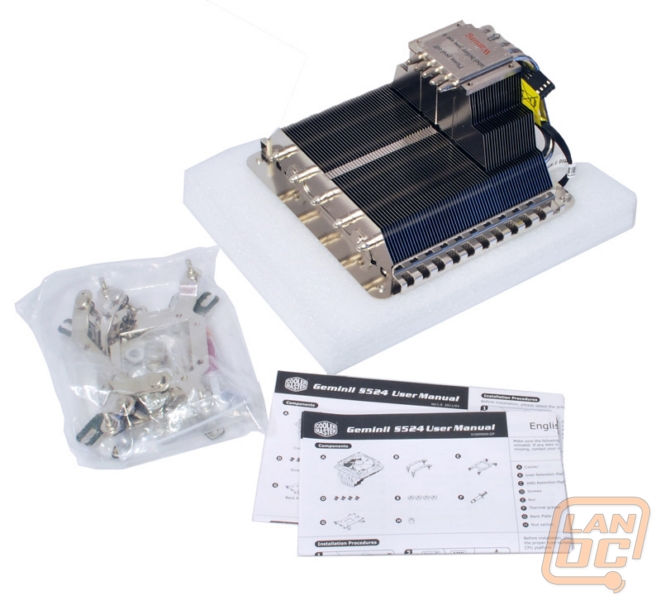 Taking a look at the cooler itself you can clearly see the odd shape.  It naturally doesn’t balance well on the base, which we will touch on again during the installation.  The base itself is electroplated copper with a semi-shine to it.  Some will argue that the base needs to be perfectly smooth, though I advocate a slight texture to a base.  In the final picture you can see the cooler propped up with a bottle of thermal paste remover.  As you can see that 47mm clearance does give a fair amount of overhang.  In the instructions it shows that different configurations are possible, but the majority of the time I see users hanging this over RAM slots. 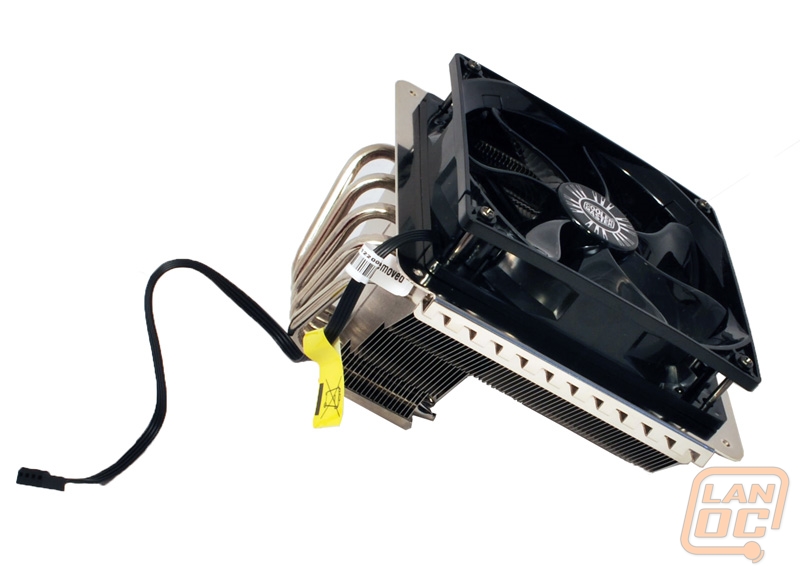 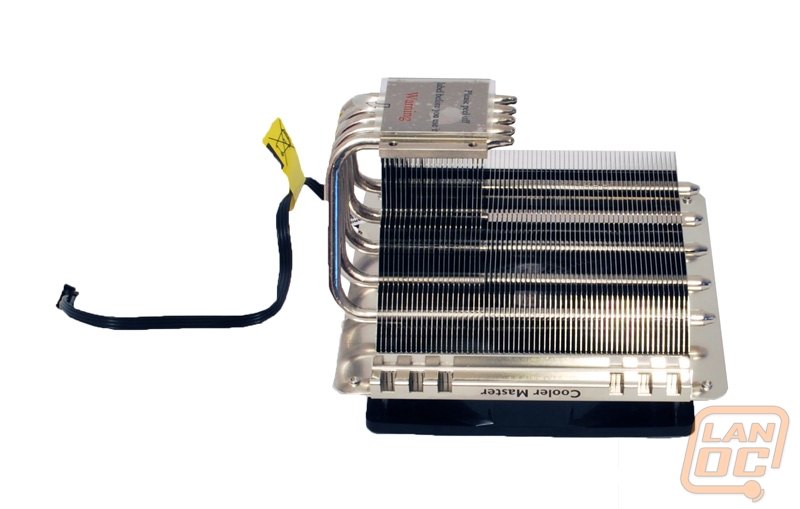 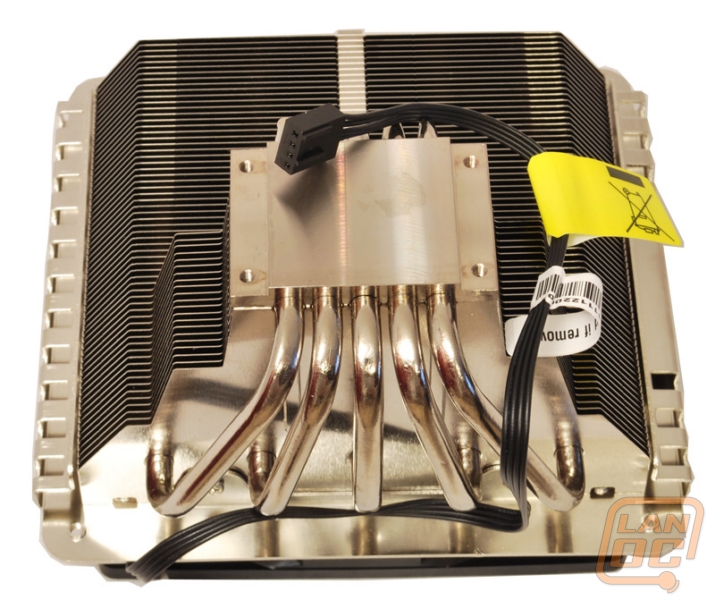 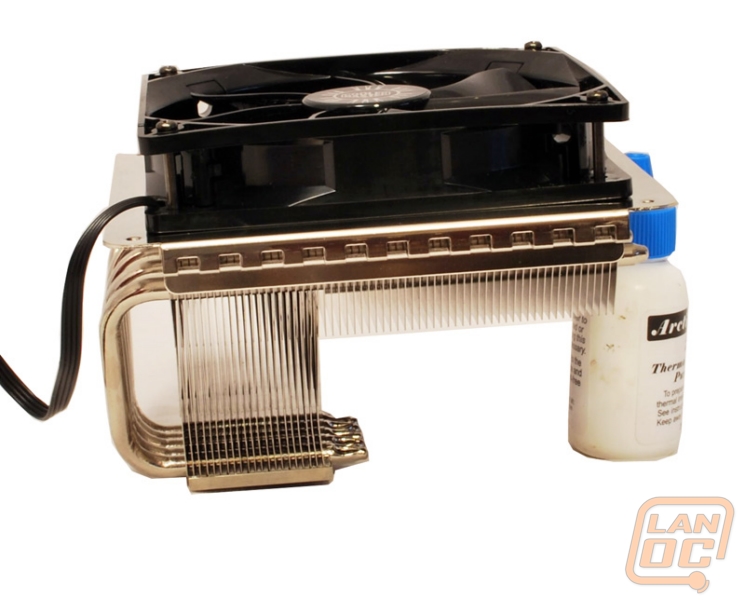 The first part in installation of course is to pull off the current heatsink and clean off the residual thermal paste.  What you can see in the first image is the RAM I have has a pretty low profile.  In this setup it the only practical configuration is over the RAM as pointing the cooler any other direction would run into the GPU.

The hardware was pretty simple to work with, though I did run into some frustrating points.  Due to the sheer size of the heatsink, screwing in washers on the front side of the board would be impossible.  However, with the overhang, the cooler doesn’t just sit there while you reach behind the board and screw on the retention nuts.  Standing the case up, applying thermal paste and holding the cooler in place, with the other hand apply the nuts, is the only practical way to install this.  It is a  bit of a balancing act, but not impossible. 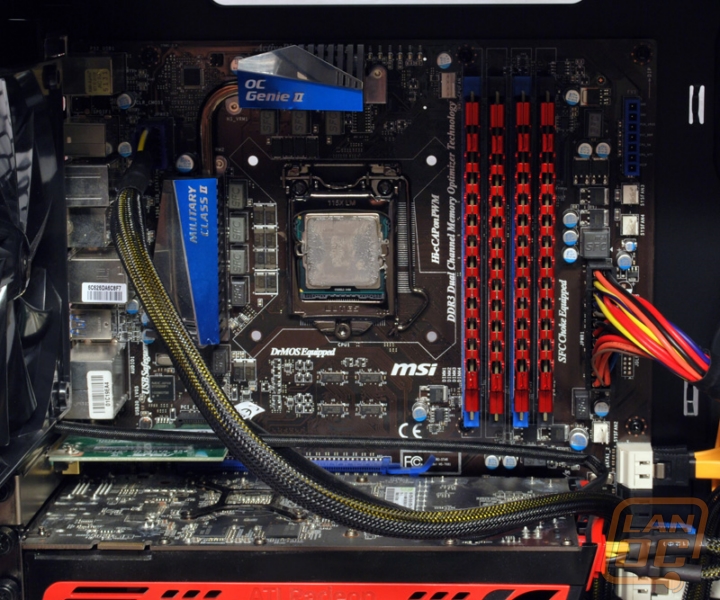 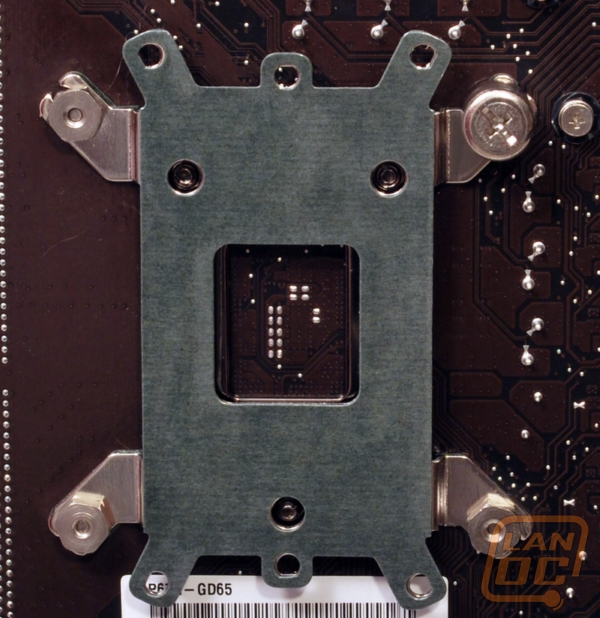 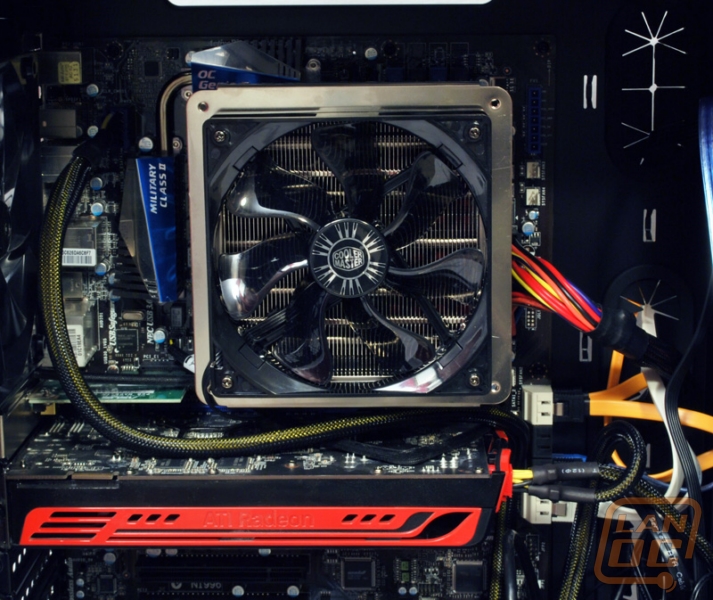 For testing I compared the GeminII S524 with my favorite baseline CPU Cooler – the Noctua NH-U9B SE2.  I tested the coolers at both stock and overclocked using the MSI OC Genie under both idle and load conditions. 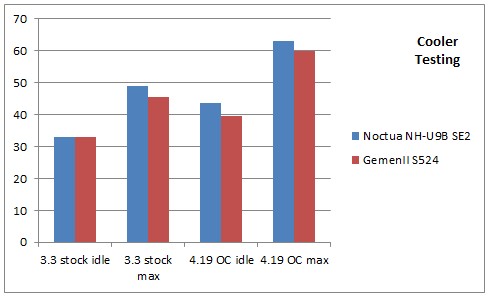 The Cooler Master GeminII S524 surprised me.  First, I didn’t think I would like even the look once it was dropped into my case.  Second, I am a huge fan of dual quiet fans in a push/pull configuration.  I typically see at least an additional of 2 degrees Celsius drop in temperature.  The Noctua focuses on keeping the noise down, but there haven’t been many single fan coolers that have beat it in cooling ability as well.

The GeminII S524 surpassed my expectations in cooling.  It beat the Noctua in every test and the single fan kept the noise down well.  The added benefit of more airflow across the memory and mainboard in general is a good sell as well.  Once the cooler was installed in my rig, it actually looks pretty good.  It grew on me the longer I used it.  With an MSRP of $39.99 this is a very reasonably priced cooler. 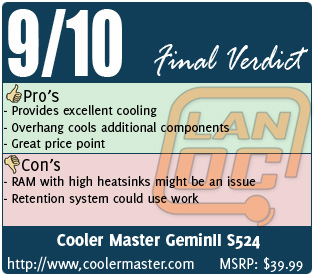 Author: Lersar
Contributing Editor / Event Staff
Adam is a big proponent of LAN parties, esports and speed-running, and helps organize our semi-annual LAN events. He has covered hardware and software reviews of a wide variety, but most content these days come from event coverage, such as other LAN parties.
Discuss this article
Log in to comment
Posts in discussion: Cooler Master Gemin II S524