Shredding with Slash, blazing through the umpteenth solo of Through the Fire and Flames, becoming a national idol, and taking down a rock deity in a grueling battle of axes is an everyday thing for most of us. No longer can our guitar skills be measured on this mortal plane, rock gods we have become....when it comes to Guitar Hero that is. This game has become a worldwide phenomenon, sweeping the young and the old into its frenzied maw. Unfortunately, when something grows as popular as Guitar Hero has, it's a little difficult to remain unique when millions are lugging around the same machine molded toy guitar. Our friends at HeroGear have come up with a solution to this with guitar skins specially designed and fit to add a little flair to anyone's guitar: 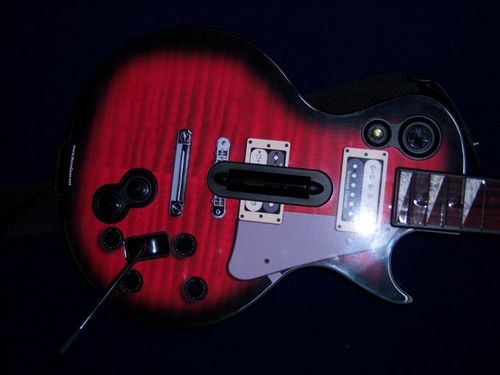 HeroGear supplies skins for all of the current Guitar Hero licensed guitars as well as the aftermarket Nyko guitar. To be fair, HeroGear was not the first to produce skins for these guitars. Originally aftermarket companies would handle skins, and more recently, actual licensed Guitar Hero faceplate's have been produced. However, these designs are unoriginal and uninspiring, as they were often modeled after famous guitarists' guitars or band designs and logos. By stark contrast, HeroGear offers a completely unique selection that they designed themselves. Moreover, you can make your own design and HeroGear will be happy to turn it into a skin for you. The skin they sent to us at LanOC for review is a red sunburst Les Paul skin with full dress options, custom pickups and chrome hardware. 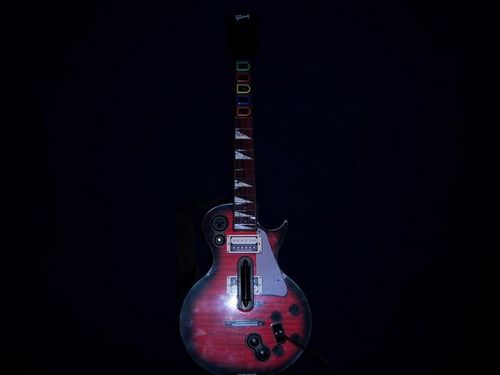 HeroGear has deviated from the norm by designing these skins as a plain sticker, rather than plastic with adhesive or a faceplate. This isn't necessarily a bad thing, as it allows the skin to fit to the guitar without obstructing access to the buttons, the whammy bar, or their functions. It adds almost no more thickness to the guitar than the faceplate itself, so people who want a skin with some substance are out of luck here. On the other hand, for those of us who want a bit of style with little to no interference, it's right up our alley. One thing I am personally disappointed in is the fact that it doesn't function as a faceplate for the Les Paul, which would remove any issues with fitting. That may be a bit harsh, though, considering that faceplates would be harder to design and manufacture, this would raise the cost. Speaking of fitting issues, unfortunately there were some with the skin they sent: 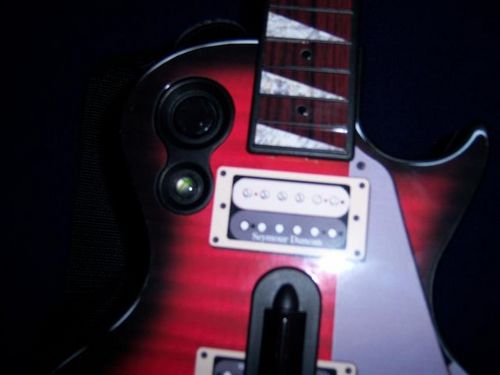 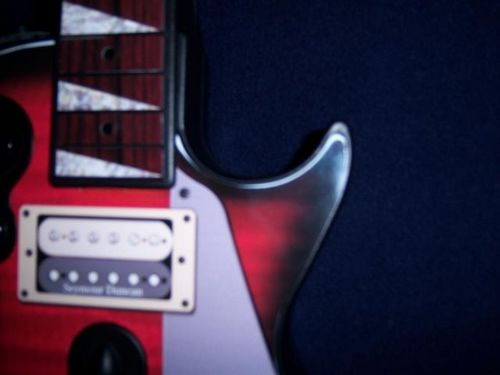 HeroGear also presents an interesting difference in their skins in that they are the first I have seen to provide a skin for the neck itself.On the skin sent to us this was meant to resemble a wooden neck. This is a neat addition, but I am saddened to report that it is this part of the skin that fits the poorest. The sticker is split into several sections, all of which seem a tad too wide to fit their section properly. Not only that, but when lining up the holes properly, it makes the neck line up incorrectly. So it's your choice: line the neck up straight like a normal guitar or have the sticker holes in the right place with a zigzag guitar neck. 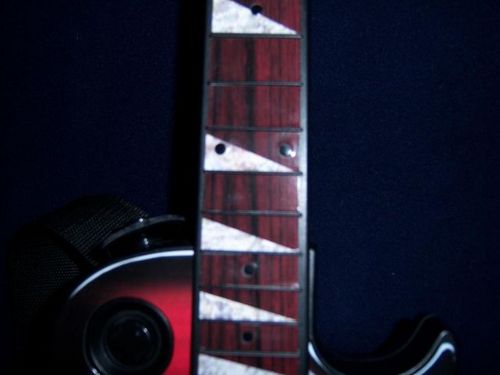 These fitting issues are slightly annoying, but for the most part, the skin is spot on. An average person would not notice these slight flaws unless someone pointed them out or they were looking rather closely. Another potential issue that drew my attention is the fact that since the skin is a paper sticker, the coloring may be rubbed off slowly in high wear areas. There is a layer of laminate on top of the sticker that may prevent this from occurring. I haven't had the skin that long, so I won't factor it in.

The actual images drawn onto the skin are amazingly detailed and lifelike, giving a toy guitar realism never before seen. Nothing has slipped under HeroGear's nose, with dials that look like they could be adjusted and chrome that seems to be sparkling in the light of the room. Not to mention that this is merely coming from the skin I reviewed, whereas there are literally hundreds more to chose from. 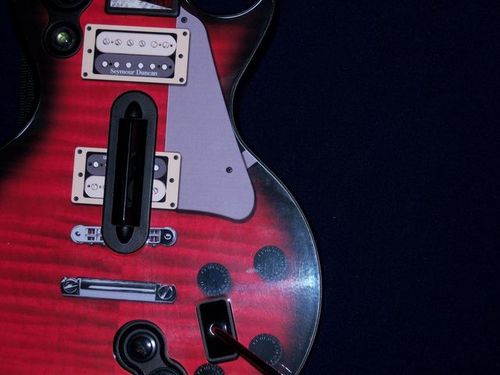 Final AnalysisHeroGear's guitar skins are a visual marvel plagued with minor fitting issues. However, the selection and unique designs available make them, in this reviewer's opinion, preferable to those offered by RedOctane or other companies. I still hold out hopes for a faceplate option, because if this skin fit perfectly it would be a flawless product.

You might call him obsessed or just a hardcore geek. Wes's obsession with gaming hardware and gadgets isn't anything new, he could be found taking things apart even as a child. When not poking around in PC's he can be found playing League of Legends, Awesomenauts, or Civilization 5 or watching a wide variety of TV shows and Movies. A car guy at heart, the same things that draw him into tweaking cars apply when building good looking fast computers. If you are interested in writing for Wes here at LanOC you can reach out to him directly using our contact form.
Discuss this article
Log in to comment
Posts in discussion: HeroGear Les Paul Guitar Skin

We have 1521 guests and one member online