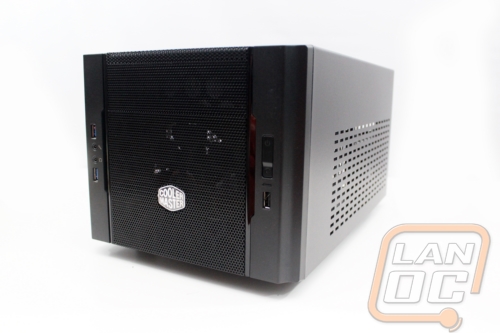 The Mini-ITX market has been growing both in popularity and in options. That means where we used to have one or two motherboard options, nearly every manufacture has multiple options now. Along with that, we now have Mini-ITX focused heatsinks and video cards. Cooler Master is no different with them expanding out their Mini-ITX case lineup beyond the Elite 120 that we reviewed a while back. Today I have the chance to take a look at one of their other options, the Elite 130. It is very similar to the Elite 120, but with a little different styling. Let’s see if the Elite line can still hold its own against the growing competition.

With the Elite 130 being such a small case, the box that it came in was equally small. The box really didn’t have much room on it for any fancy artwork. One side of the box had a line drawing of the Elite 130 and the other side (pictured) had a full specification listing. That specification listing is more important on a small case like this because before you take it home you want to make sure that your power supply, video card, and heatsink will fit in the case. Cooler Master did make sure to include all of that information and more. 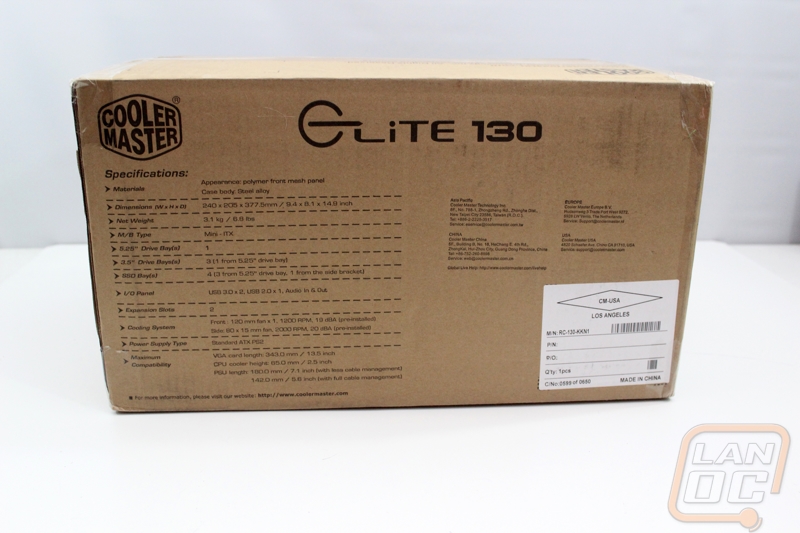 Inside, the Elite 130 was wrapped up in a plastic bag to prevent scratches and secured with Styrofoam on both sides to protect it from damage from being dropped. The box actually came in with a large dent/rip in the side but to the credit of the foam the case had no damage. 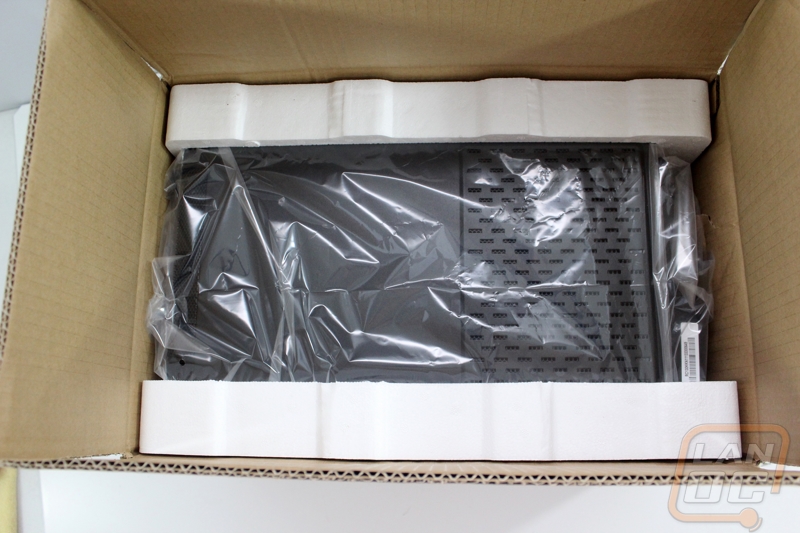 Alongside of the case you also get a small installation guide. 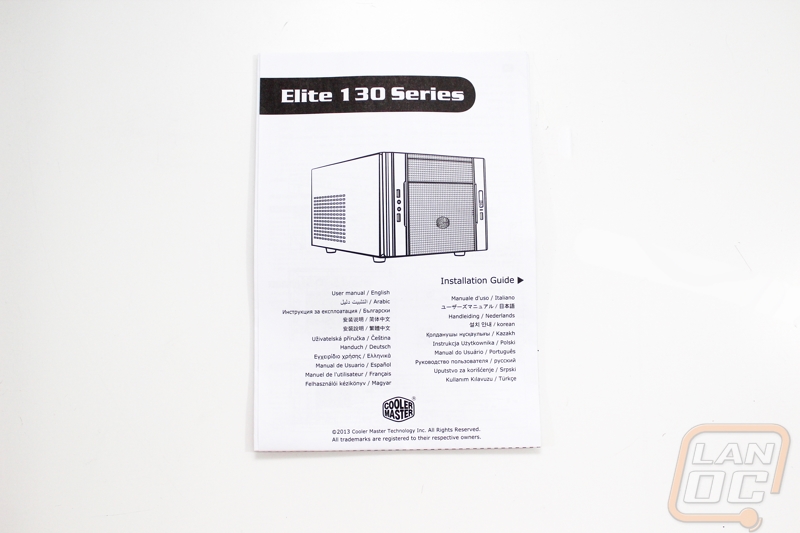 Inside of the case Cooler Master included a small resealable plastic bag with all of the motherboard standoffs, screws, zip ties, and a speaker for your motherboards front I/O. 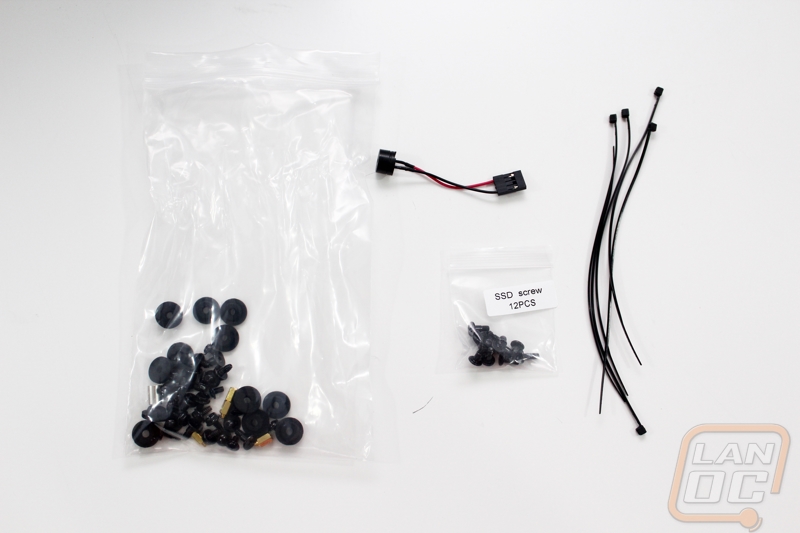 We have seen the Elite 120 both in our review of the case, Adam’s LAN rig, and it is also a very popular case for small LAN rigs at our events. So my initial thoughts on the Elite 130 were mostly on how similar the cases are. Really all of the differences are on the front of the case with its mesh front panel where the Elite 120 had a solid panel hiding the front fan. Opinions on what design looks better differ some people are going to prefer the cleaner look that the solid front panel gives. Personally I like them both but would most likely lean towards the additional airflow that the full mesh front could potentially give me. With that said even the front I/O panel connections are the same. You get two USB 3.0 ports on the left side and a single USB 2.0 on the right side along with the power and reset buttons. 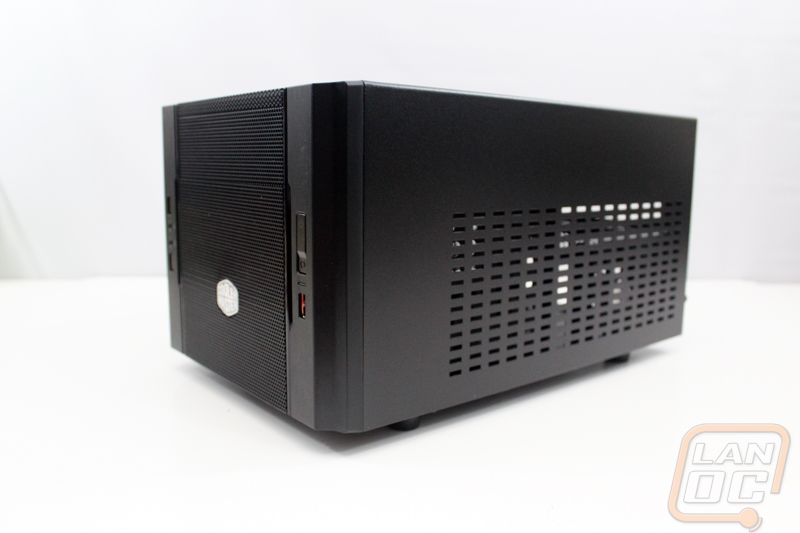 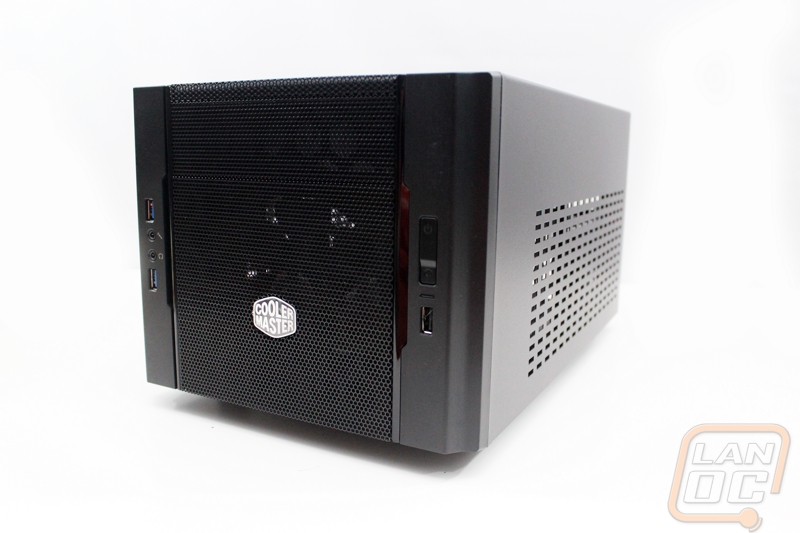 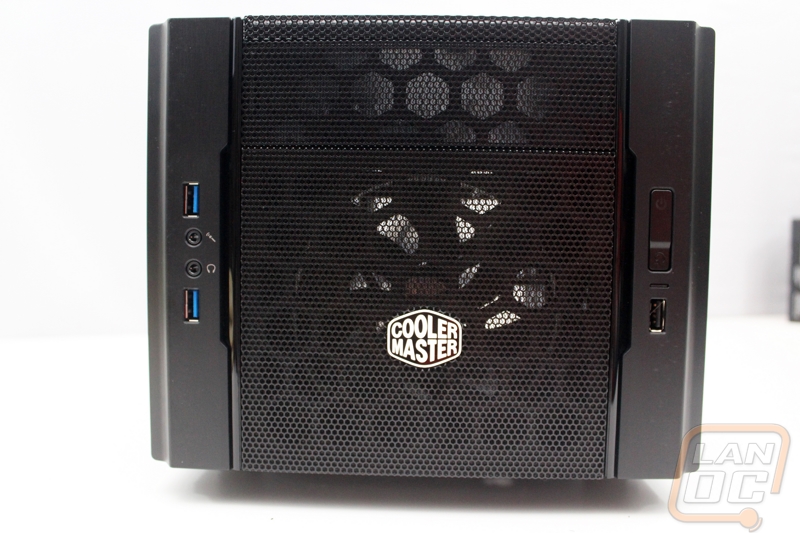 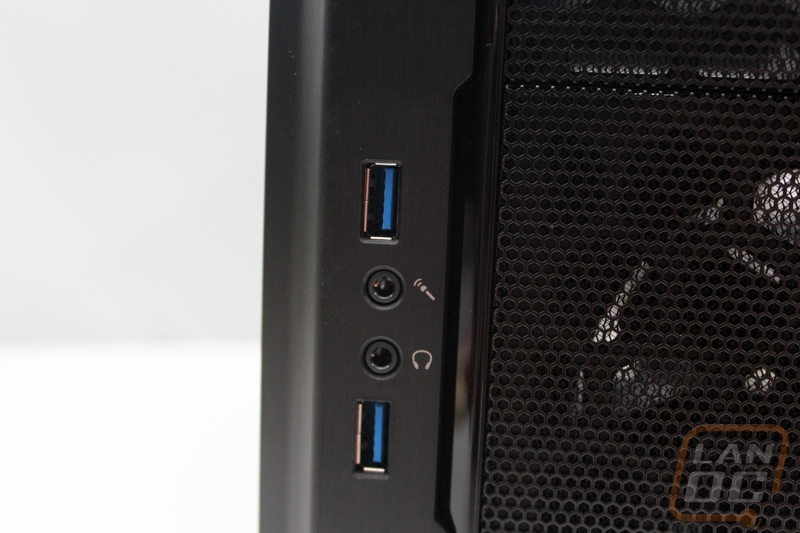 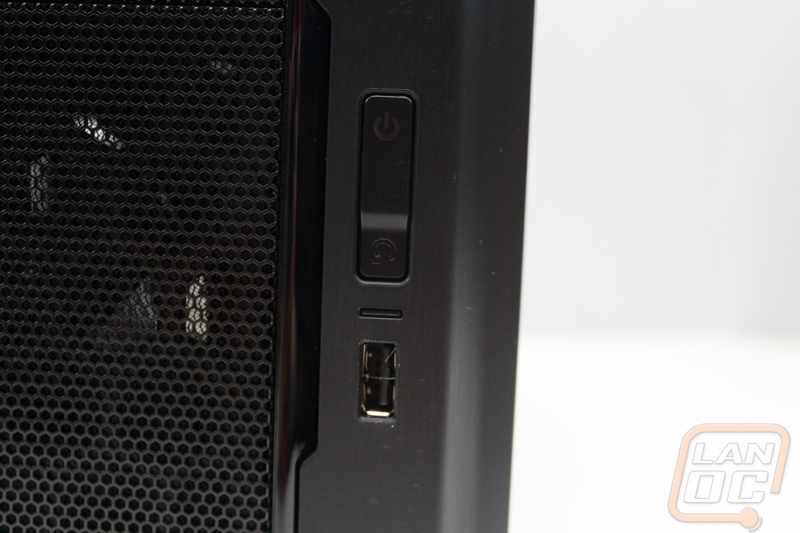 Both the left and right side panels have a slot vented design to give the Elite 130 a little extra air flow, something that can be extremely important in a SFF build. 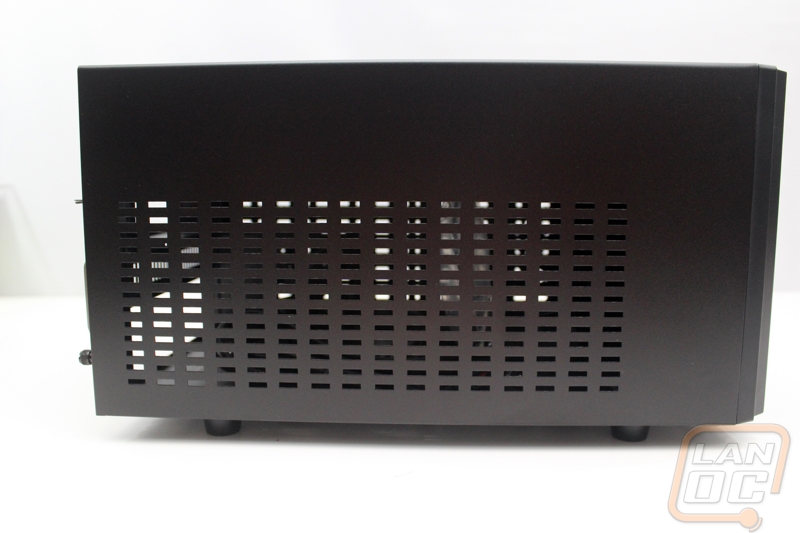 Around on the back things are still the same as the Elite 120. You have the rear I/O down at the bottom with more ventilation between it and the power supply. The power supply mount sticks out of the case about an inch from the back of the case to give room for a longer PSU inside. I’m not a fan of this design choice at all, I would rather them make the case a little longer or limit your PSU options slightly. If nothing else it would be great to have a second optional mount that is flush mounted should you go with a small PSU. Then over on the right we have the two PCI slot covers. There are three thumbscrews holding the case shell on, once removed you can slide the cover back a half inch then pull it off. 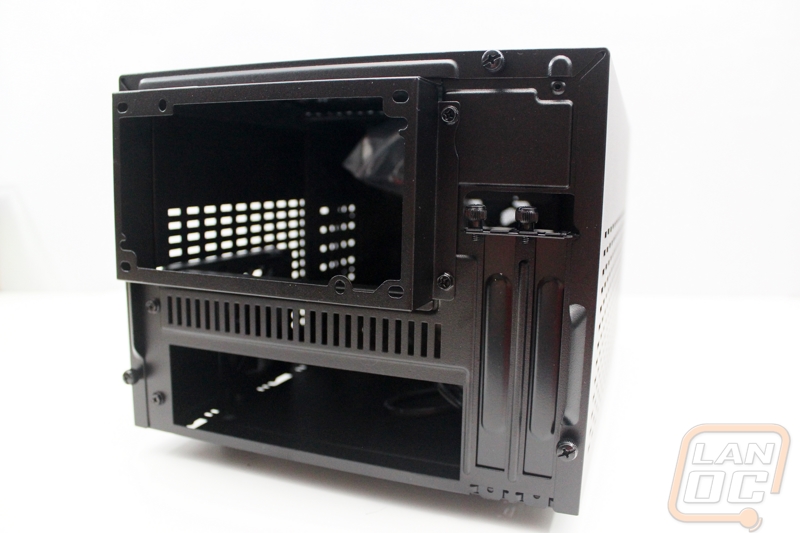 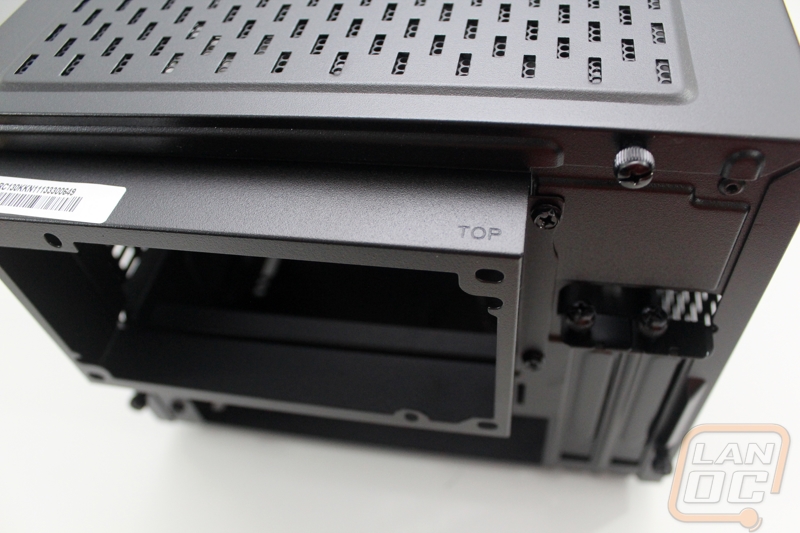 On the bottom of the case we can see some of the various drive mounting options that we will see more off inside of the Elite 130. Beyond that the only other thing of importance here are the four feet. Cooler Master went with a plastic foot design that feels and looks a little cheaper than I would prefer. An aluminum foot with a rubber pad on the bottom would look much better on the Elite 130 in my opinion and it would prevent it from sliding around on the plastic tables sometimes seen at LANs. 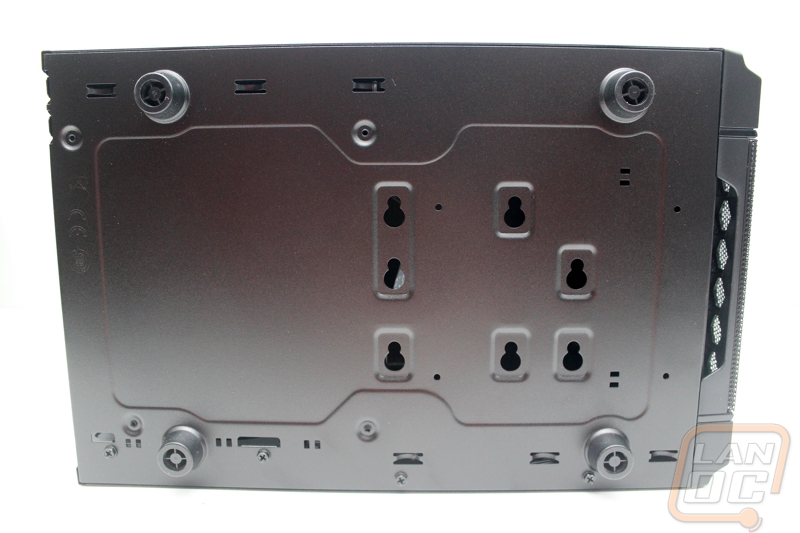 Digging into the Elite 130 is easy with just a single panel that separates the inside from the outside. The entire interior of the Elite 130 has the same black finish that the rest of the case has, along with that all of the cabling for the front panel connections is the same black color. Being a Mini-ITX case there really isn’t all that much to check out, but let’s break it down section by section. 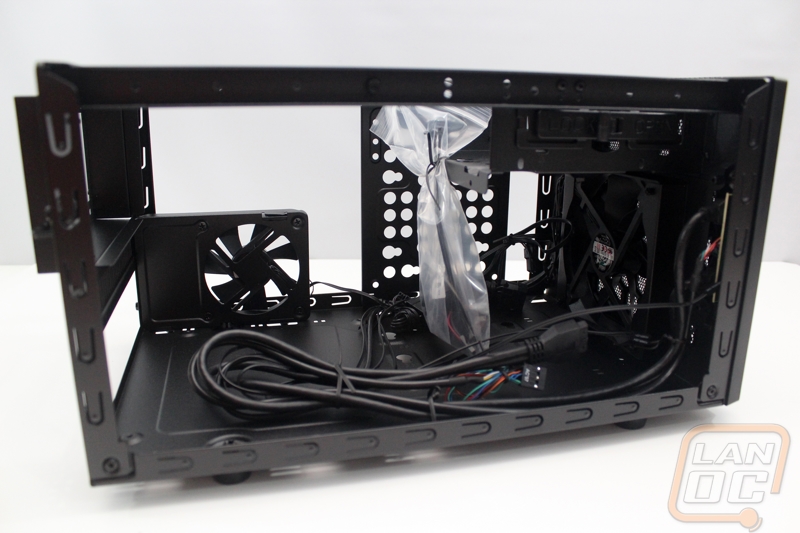 Starting up in the top of the front of the Elite 130, the 5.25-inch drive bay is designed to pull a little double/triple duty. If you decide to not use it for a disc drive, you have mounting points for a 3.5-inch hard drive or  two 2.5-inch SSDs. 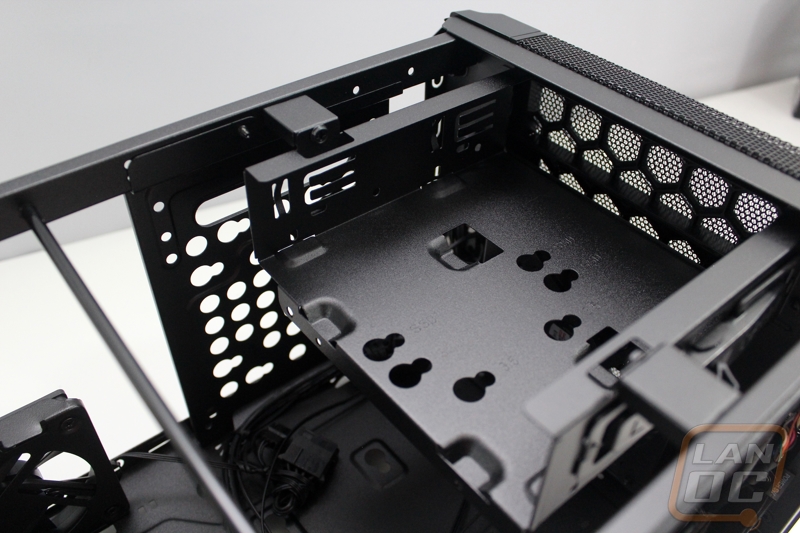 Under the 5.25-inch drive bay we can see the intake fan that is mounted at the front of the case. Cooler Master designed this area to have enough room to install a 120mm radiator should you decide to water cool your rig. The side bracket here is removable but does give you more 2.5 and 3.5 drive installation options. You can also mount a 3.5 or 2.5 inch drive directly to the bottom of the case here as well. 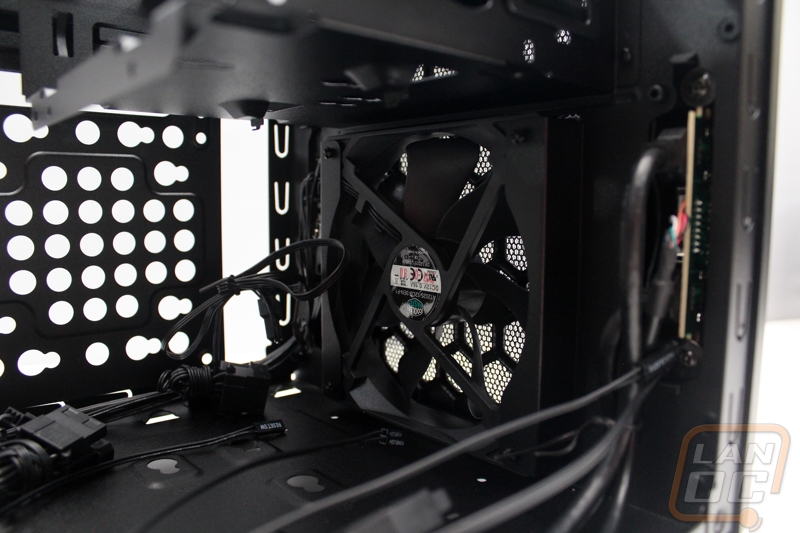 Along with the motherboard along the bottom, there is a second fan that pulls air from the vents in the side of the case and blows it across the motherboard to keep things cool. This is really important because the Elite 130 uses a full sized power supply and it is mounted directly above the motherboard. Not only does this limit the amount of space you have for airflow but it also means you can only run very small CPU heatsinks, letting hot air get stagnant right above the motherboard would lead to overheating very quickly. 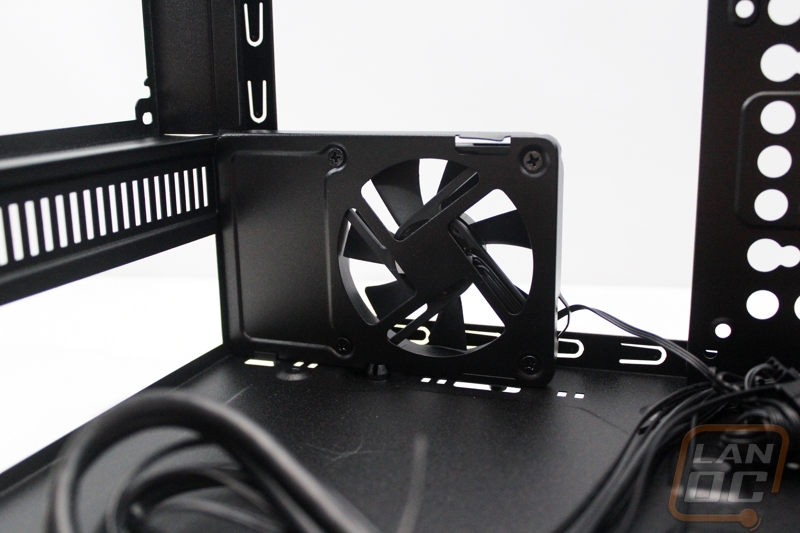 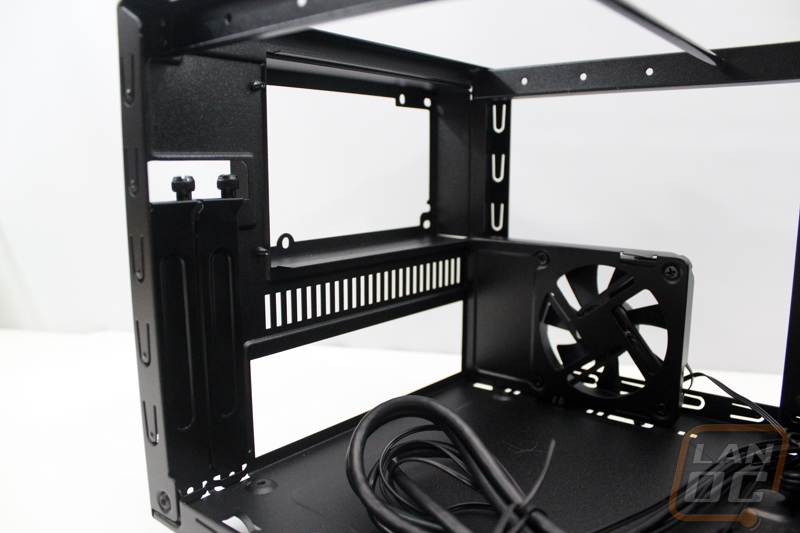 As expected, building a PC in a smaller case like the Elite 130 took a little more pacience than normal. This is mostly due to trying to work in a smaller space, but it’s also because wiring in a small PC like this is even more important. Because of that, when building in the Elite 130 I saved the power supply installation for last. To get started I installed our motherboard, ram, and CPU. Being Mini-ITX this only takes four screws. To really put the Elite 130 to the test, I went with a GTX 780. Being such a large card I was a little concerned that it wouldn’t fit well but as you can see I had no issues at all. There is still additional room for an even longer card, should you need it. 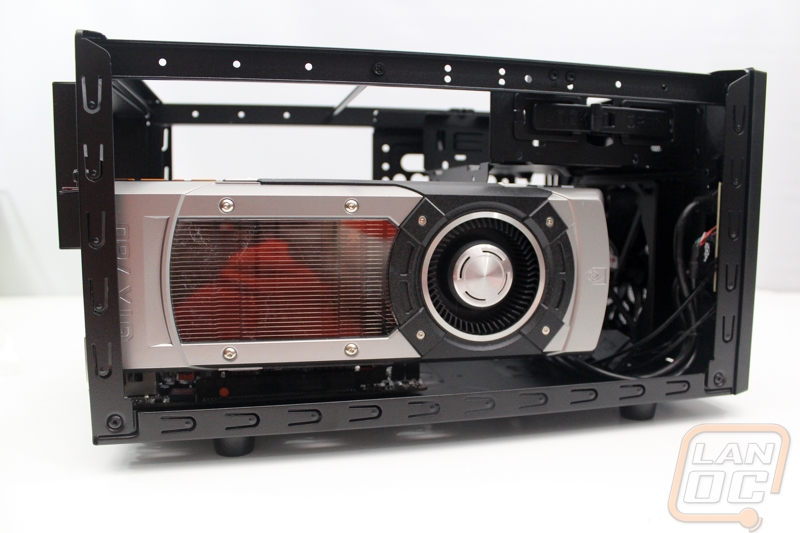 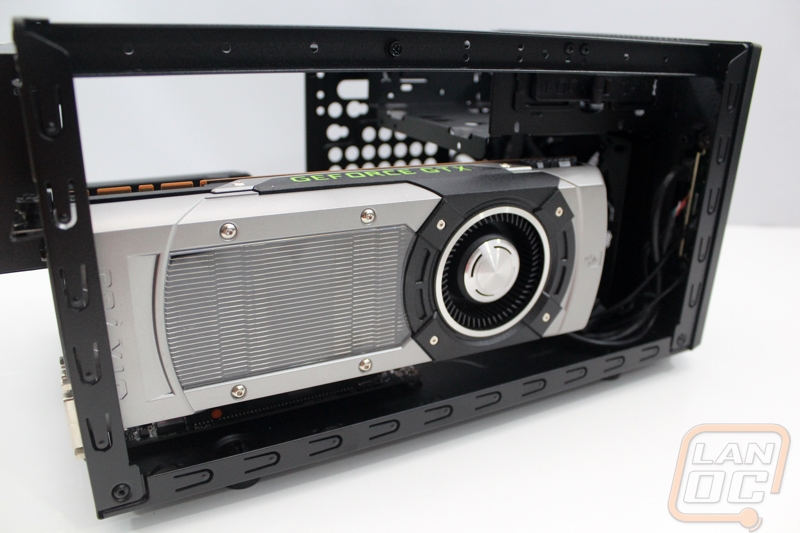 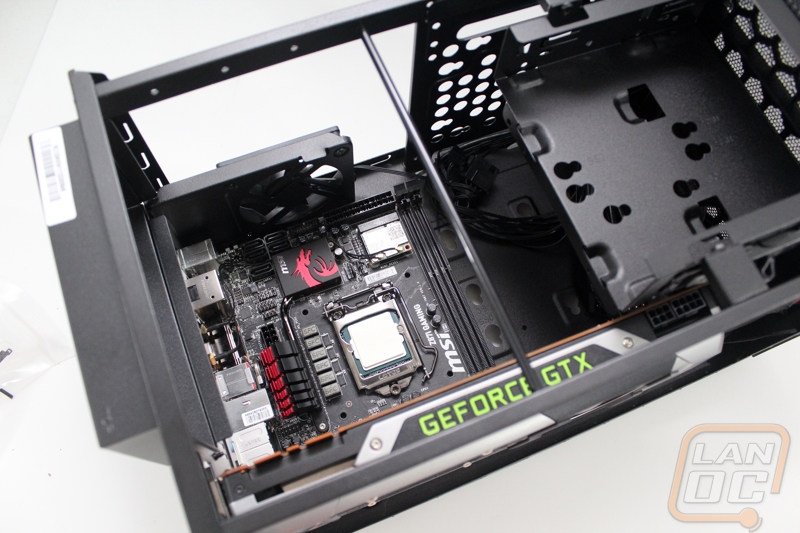 Once I test fit the power supply I can see why Cooler Master went with the PSU extension on the back of the case. Our full sized power supply fit well with a little room for accessing the modular cables. I would recommend hooking up all of the wiring first before fully installing the power supply like I have though. This will give you more room to reach in and plug everything in. Once hooked up, you will need to do your best to clean up the wiring as well but without a motherboard try to hide everything behind it can be a little tough. Clean wiring means more airflow, more airflow means better cooling. 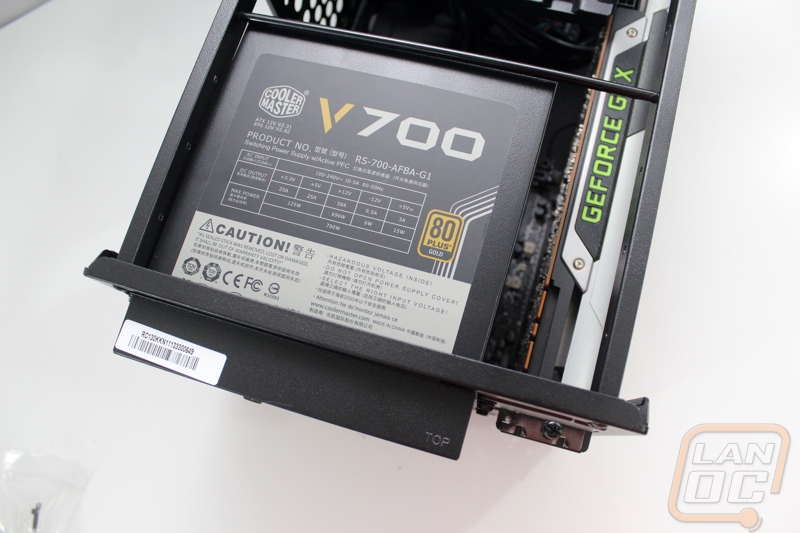 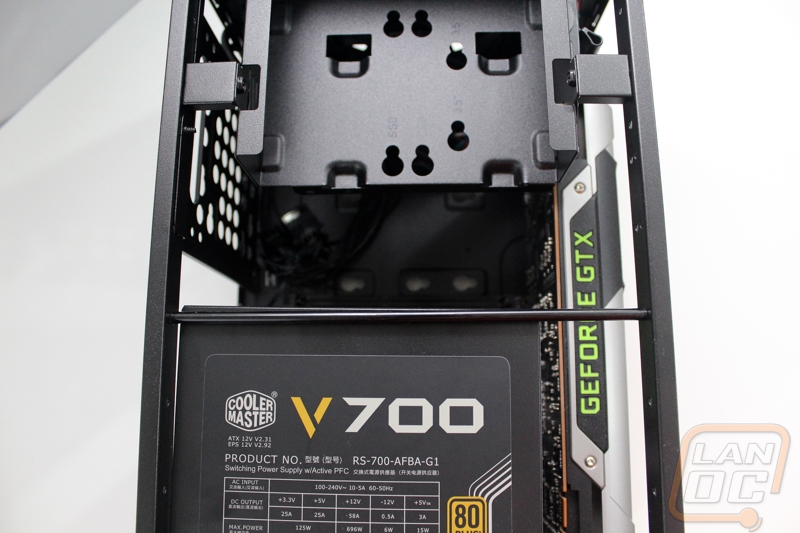 After installing the power supply I was able to see one of the downsides to Cooler Masters design. You are going to be limited to a stock CPU heatsink or one of the few low profile models like what I have used on our Lunchbox builds. I’m not typically a big fan of stock heatsinks both because of the noise they tend to make as well as their cooling power. I would highly recommend looking for an aftermarket option, especially in such a small case. 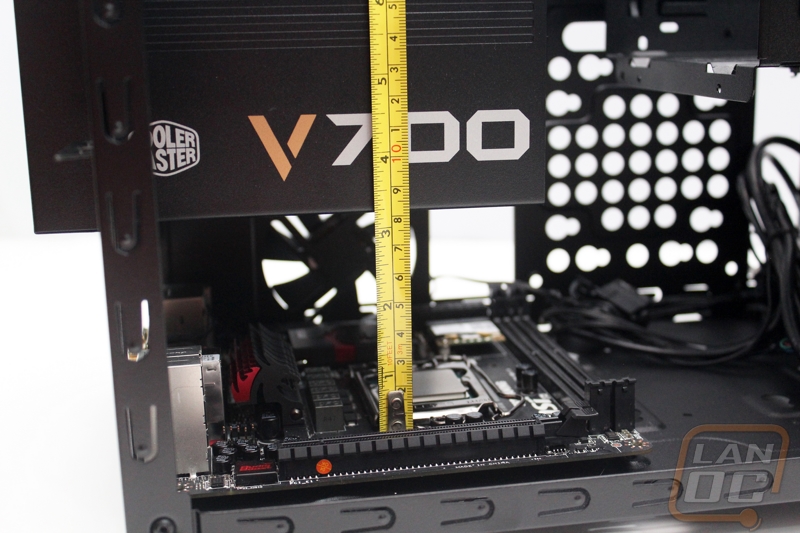 With the GTX 780’s power connections facing up hooking them up was a little tighter than I would prefer, but I was able to get them connected. 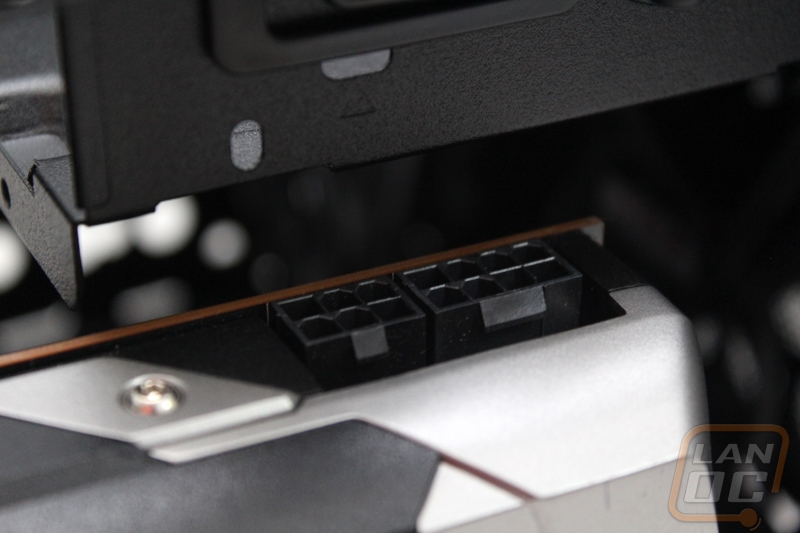 With everything installed I was finally able to see how well the Elite 130 performed. The front mounted fan wasn’t too bad for noise, especially when next to the stock Intel heatsink that I had to go with. For cooling I think the combination of my wiring and the more open front mesh paid off. I have heard of some people having heat issues in the Elite 120, but I didn’t have any problems this time around. At least no more than expected from such a small build. The best part about the Elite 130 is the ability to pack everything up and take it with you without breaking your back. I found the power and reset buttons to be a little weird feeling, but they still got the job done.

With the popularity of the Elite 120 it isn’t a surprise that Cooler Master would be interested in putting out another Mini-ITX case. I was a little surprised at first that the Elite 130 is the same as the previous model with the front design changed slightly. However, taking into consideration that heat can be an issue in some Mini-ITX builds, I don’t blame them for wanting to improve on that. Of course I would have liked to of seen them tweak the power supply mount that sticks out of the back, or at least offer an optional mount that doesn’t for those who go with a short power supply. They also stuck with the single USB 2.0 port on the front (with the two USB 3.0 ports of course) when they could have ran two USB 2.0 ports of the internal connection they use. Even so, the benefits of Cooler Master’s design still outweigh the downsides. It has been and will continue to be a great LAN rig due to its size and capacity to hold a large video card and a full sized power supply. I would still recommend it, especially at less than $50. 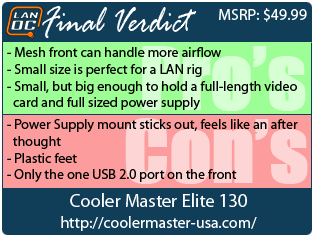 You might call him obsessed or just a hardcore geek. Wes's obsession with gaming hardware and gadgets isn't anything new, he could be found taking things apart even as a child. When not poking around in PC's he can be found playing League of Legends, Awesomenauts, or Civilization 5 or watching a wide variety of TV shows and Movies. A car guy at heart, the same things that draw him into tweaking cars apply when building good looking fast computers. If you are interested in writing for Wes here at LanOC you can reach out to him directly using our contact form.
Discuss this article
Log in to comment
Posts in discussion: Cooler Master Elite 130

Today I take a look at a Mini-ITX case from Cooler Master, enjoy.

We have 1380 guests and one member online