Tired of carrying your massive desktop computer to LAN parties? Our editor, Garfi3ld, must have been when he got his "lunchbox" Shuttle computer. It's pretty fast, but some compromises have to be made to get everything in such a small space. Most noticeably, the graphics card. While a Radeon 5770 fits, I doubt anything bigger and faster will. For some, this isn't a compromise they're willing to make. This is where the In-Win Dragon Slayer comes in. Although it is bigger than a Shuttle, a large high-end graphics cards will fit in it. Plus, you'll make it to the lan without breaking you back.

My family knows not to open packages when they come in, because I have to take pictures of them intact. So it sat in the front room, unopened, for a good while. In the mean time, everyone found themselves enamored with the dragon that's on the box. How easily they're amused. I have to admit, it is kind of nifty. 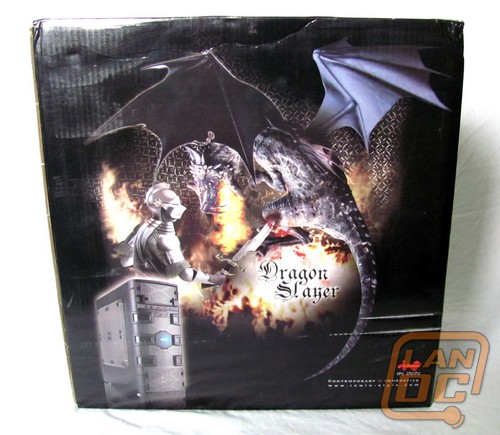 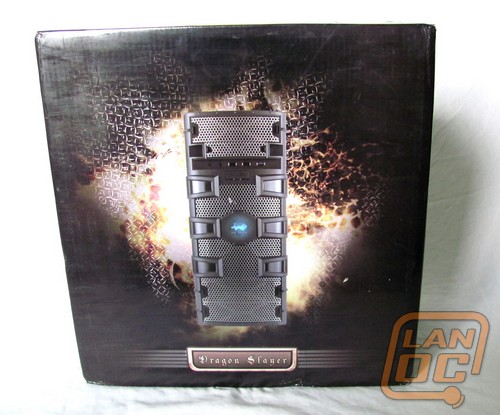 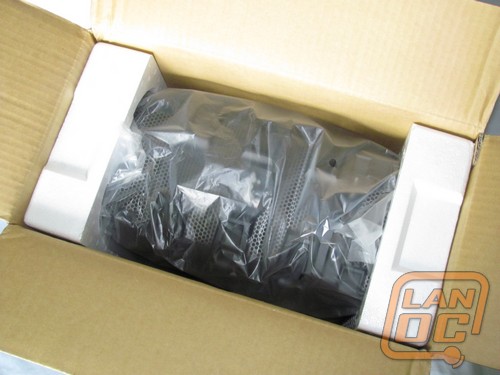 Here's a look at what comes in the bag of goodies. You've got the manual, 6 drive rails, 4 wire tie-downs, and assorted screws. This has to be one of the better manuals I've seen included with a case. Not only does it look nice, it does a good job of showing you all the features and how they work. There was at least one thing outlined in it, that I didn't notice was a feature of the case. 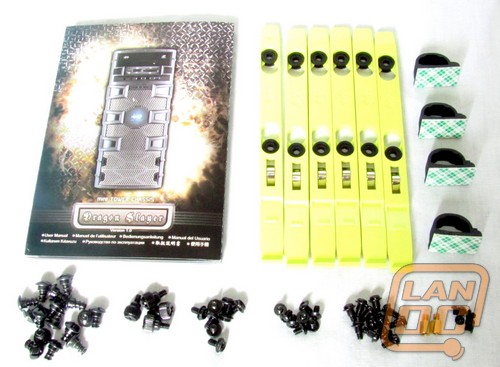 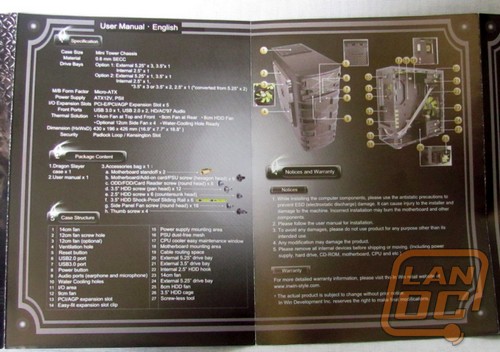 Here it is all unpacked. Normally I boost the white balance, when taking pictures, so it's easier for you to see the details. This usually causes black cases to have a grey look in the photos. Just so you know, the outside is grey on this one. If you look at the back side, you'll notice a color difference. The main chassis is painted black. I'm not sure if this is an intended feature or that the pieces are painted in different factories. 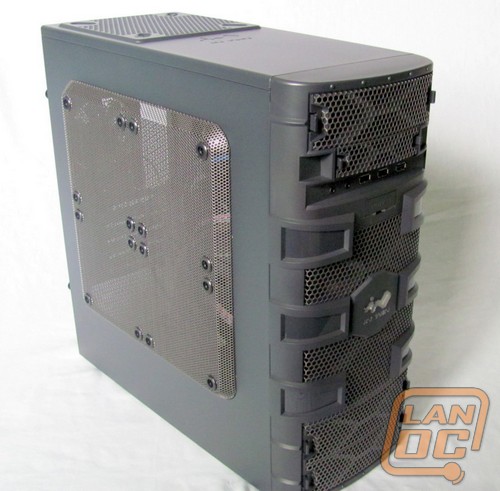 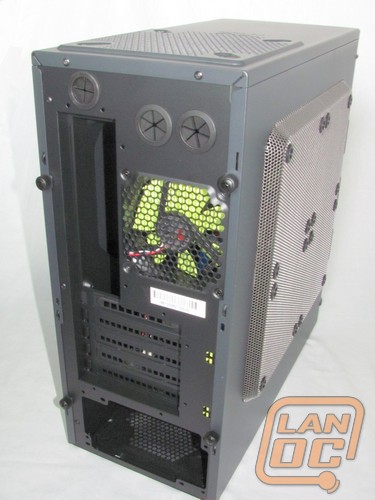 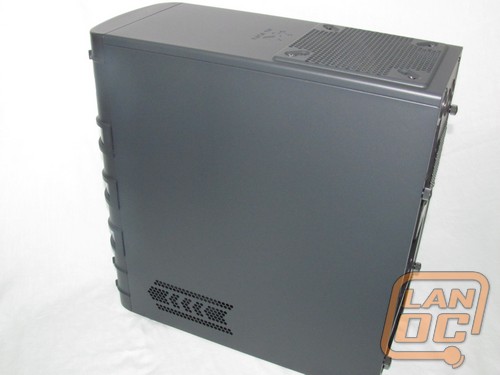 Once the side panels are off, you can see all the great features the Dragon Slayer has to offer. First off, notice the completely painted interior. I only found a couple "thin" spots, and they weren't in place's you'd normally be looking anyways. It comes with 4 fans already installed; a 140mm + a 80mm on the front, a 140mm on the top, and a 92mm on the back. Plus you have the option of adding 4 more 120mm fans on the side panel. Another thing that stands out is the large cut-out behind the CPU. I'd say there's a pretty good chance that the backside of your CPU is going to line up that big old hole. Que the Mr Rogers impression. "Can you say fancy heatsink? I knew you could." They've also included holes on the back for water cooling, in case you decide to go that route instead. 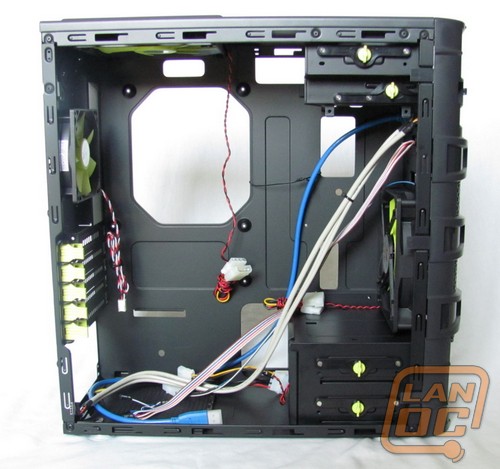 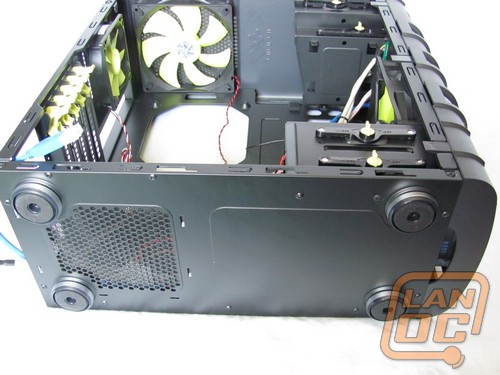 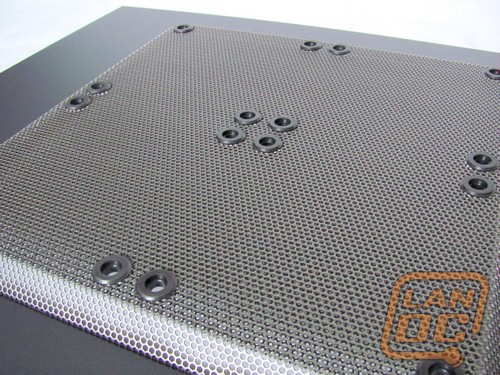 Someone at In-Win must have it out for dust bunnies. Because you're gonna have to really neglect your PC before they show their faces in this case. They've stuck dust filters just about everywhere. 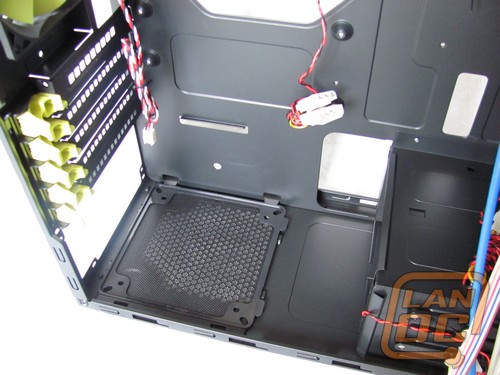 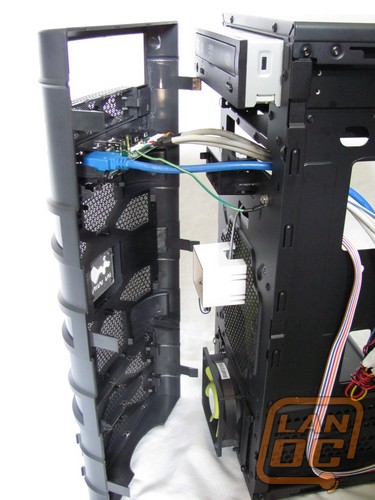 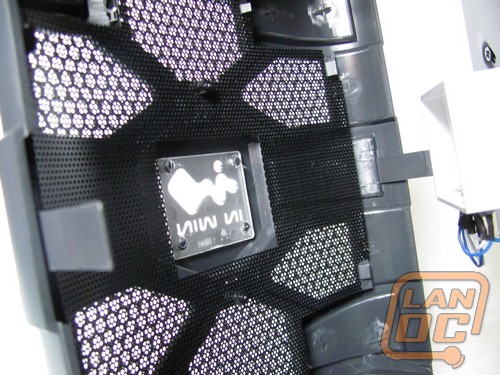 Could somebody help me out here? Why put a filter on the top exhaust fan? There's not one on the rear exhaust fan. Do people who run water cooling mount the radiator there and turn the fan around so it's pulling air in? If so, why would you push the hot air you're trying to get rid of, back into your computer? Never-the-less, if you buy a case that has a filter on the top and you're not going be using water cooling, remove the filter before you do anything. The fan will be able to remove much more hot air from your computer than if you leave it on. 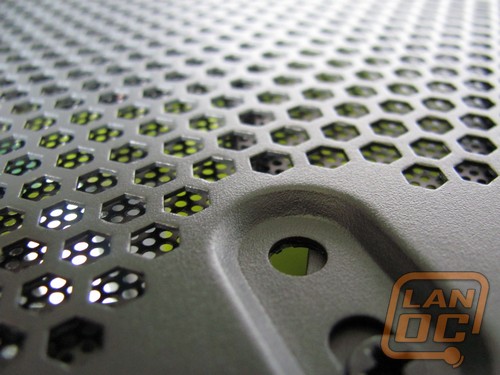 Here's the rub. I don't actually have a micro-atx motherboard to give this case a proper rundown. So, I'm going give another nod to Mr Rogers and do a little pretending. You can play along if you like. Pretend some generous sponsor sent me a fancy new micro-atx motherboard, CPU, and memory (might as was get everything). It installed quickly and easily, not a single problem. Now, I'll add the rest of the hardware

They took an interesting approach to the clips holding the drive bay covers on. Putting them right there on the outside makes it as-easy-as-can-be to pop them off. Plus it doesn't look half bad either. If you remove the two covers at the bottom, you can see the fan that blows air across the hard drives. By removing the drive locks, you can slide out the whole hard drive rack and replace it with a couple optical drives instead. Pretty neat! The thing is, I can't see anyone ever using this feature. How often do you need more than one optical drive unless you're burning dozens of copies of Twilight to sell to your buddies? Unless you plan on buying an SSD that is big enough to hold all your games and data, would you be willing to sacrifice the spot intended to hold the hard drives, to do so? Because once you remove that, there's only one place left to put a hard drive. That's in the spot intended for the card reader/floppy drive. 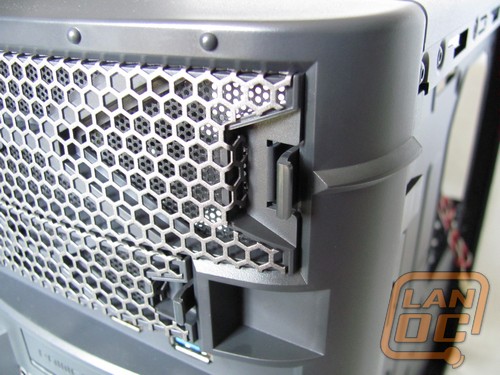 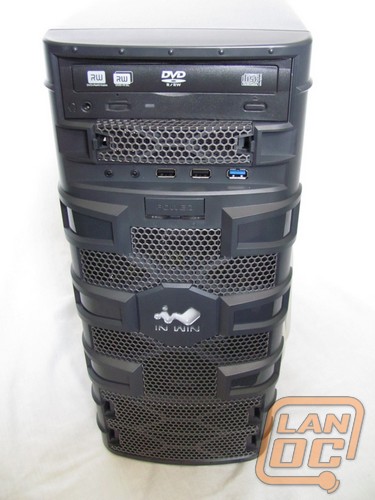 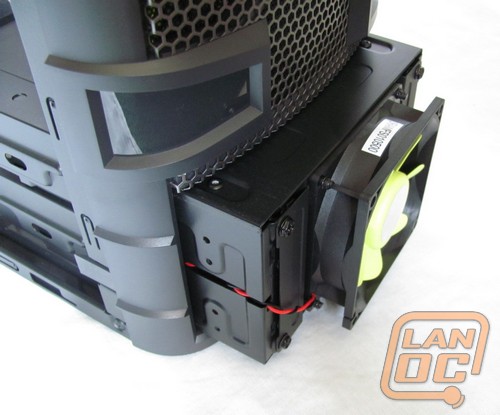 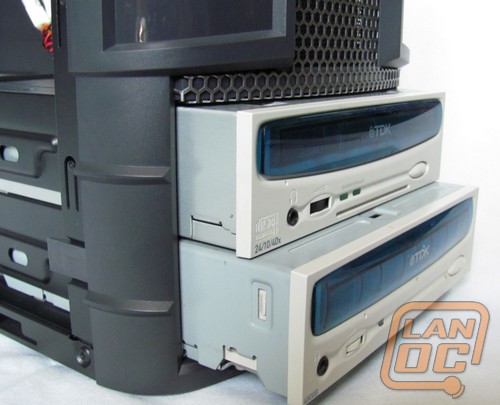 At the top you've got a single slot for an optical drive, a slot for a memory card reader, and a bracket to hold an SSD. Sure it's only a couple of metal tabs with screw holes in it, but it's certainly appreciated. An SSD tucks up there nicely, hardly taking up any room. Down at the bottom, you've got the hard drive rack viewed from the other side. This time with a drive being slid in. You can cram up to 3 in there. Whip out a few screws, attach the rails to the drive, and your ready to roll. 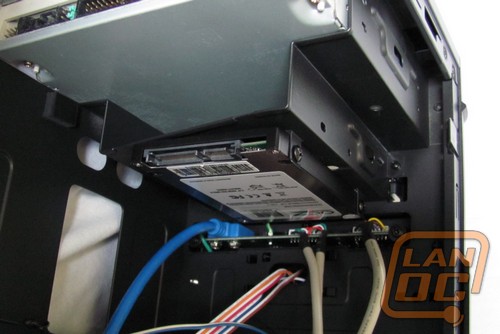 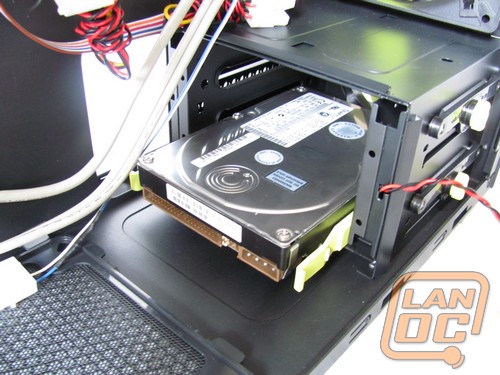 Something that's often overlooked is cable management. It doesn't take a whole lot of effort on a case manufacturer's part to do what In-Win has done here. I can't figure out why it isn't done on nearly every case. All they have to do is add a couple more holes and put more space between the side panel and the motherboard tray and Wah-lah, you have a place to run all of those ugly wires. As you know, there's nothing that boosts your geek cred more than having a neatly wired computer. You're certainly going to have an easy time of it with the Dragon Slayer. 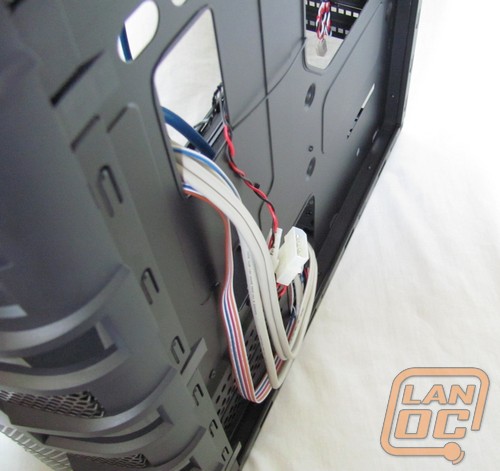 If you're buying a new computer now, you'd be nuts not to pick up a motherboard that has USB 3.0. I haven't had a chance to test it out on my pretend board yet, but they say it's smokin' fast. But what good is it if the plug is on the back. I'm getting too old to climb around the back every time I want to plug something in. In-win's solution is a bit klugey, but it works. And to be fair it's not their fault. Motherboards don't yet come with 3.0 header pins. So you take the blue USB cable that runs from the back side of the front panel, run it out the hole in the back, and plug into the USB 3.0 socket on your motherboard. Nothing to it. On the front, you can identify which is which by the colors. Black is for USB 2.0 and coincidentally blue is for USB 3.0 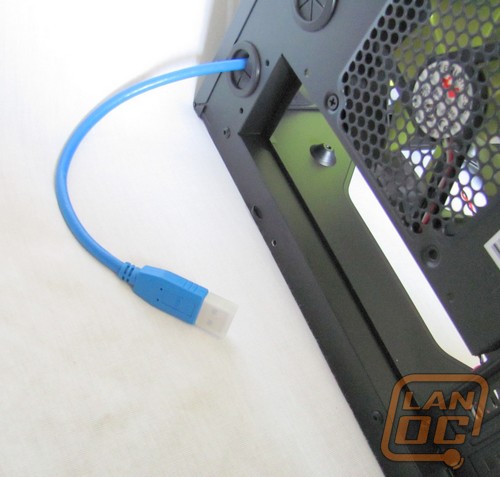 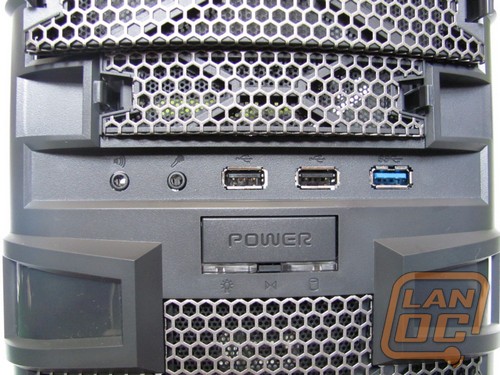 Since one of the big selling points of the Dragon Slayer is that it supports full length VGA cards, I put it to the test with a GTX260. Yep, plenty of room to spare. There was one snag though. The clips that hold the cards in place don't get along with this guy. That big fat plastic housing of Nvida's gets in the way and the clip won't snap shut. Fortunately, you can still go old school and use a screw. Just be prepared to rip the yellow clips off, because I couldn't get my screwdriver in there, with them on. I wasn't prepared to tear up a new case just to see how easily they could be removed. I'm sure it's not that hard. Putting them back on, that might be another story. 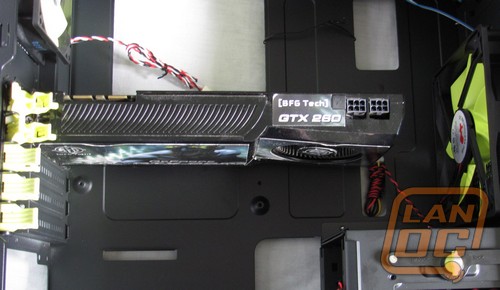 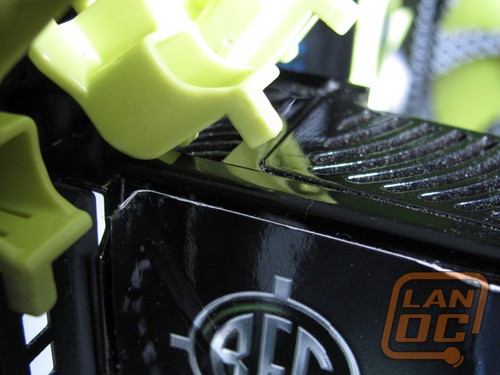 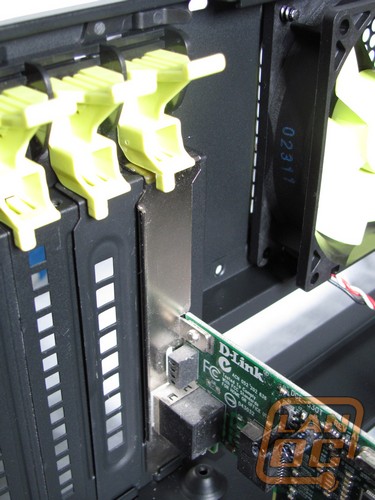 Other than a couple minor hicups, it's tough to find anything bad to say about this case. I think it boils down to whether or not you like the looks of it or not. Because if you do, there's no reason not to get this one if your getting a micro-atx motherboard. On the inside, it has everything you'd expect to see in a modern case and more; painted interior, CPU cut-out, lots of filtered fans, SSD mount, USB 3.0, mostly tool-less, cable management, and an outstanding manual. If you're building a small form factor PC and have been wading through the sea of cheap-o's cases that are on the market, the hunt is over. Now you can get back to trying to decide if you're going to go with Nvidia or AMD. 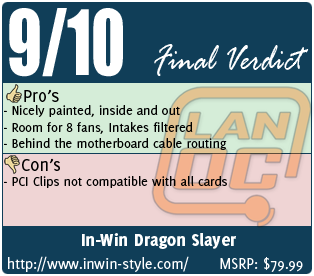 We have 998 guests and 2 members online