The word Tempest holds the meaning of a strong windstorm, a description that any user would want to define their tower. A few months ago we reviewed NZXT's basic model, living up to the name but falling short in a few minor aspects in the enthusiast category. To satisfy those users, the Tempest EVO was introduced, an enthusiast steel tower that retains it's predecessor's functionality and pairs it with an improved appearance. Today we see how the 'Airflow King reborn' performs.

Packaging
The Tempest EVO has a much more exciting design on the exterior packaging, featuring a titan-like figure with a wind-swept art stroke effect, shining light from his eyes onto the midtower. Appreciating art work comes naturally with being a gamer geek, refusing to buy any games without the original cover art, so to me this shows some commitment to the product itself. 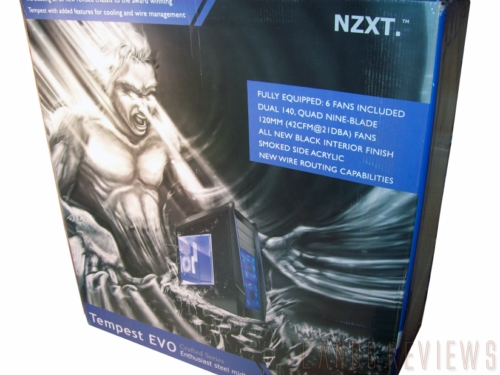 While the titan canvas on the front sports a few call-out boxes outlining some of the cases main features, the reverse side does a more complete job of the traditional information run-down, including awards, detailed pictures, and features. 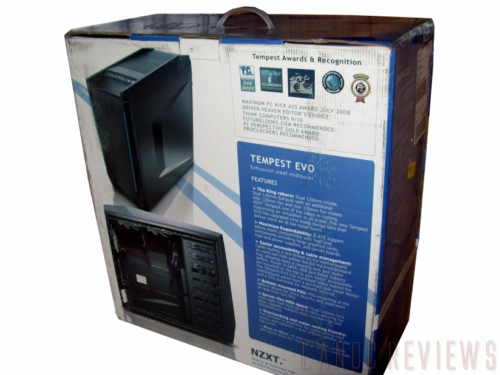 My sample came with a pleasant surprise when I opened the box, a sample of NZXT's USB expansion. If it was a bribe, it worked; the device works very well in the EVO, and it's black design fits perfect with the rest of the case. The tower itself is cushioned on either side with foam bricks the fit the curves of the EVO, and wrapped in plastic to minimize debris, which is all the more important considering the additional finish NZXT has put on this model. 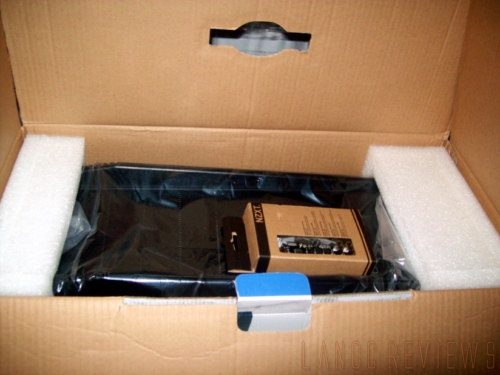 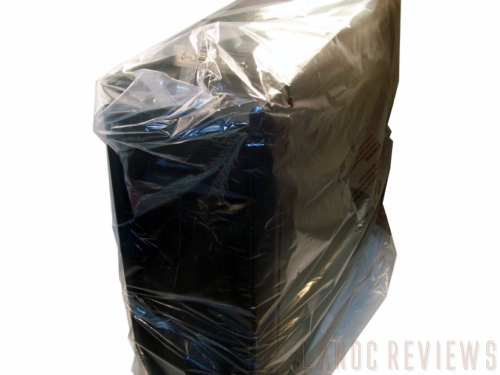 Installation
The Tempest EVO features the same E-ATX support the original had, which increases the compatibility with the ever-growing high end hardware. The motherboard tray itself has a legend printed on it to help with the location of risers. More importantly, however, the tray features a CPU cut-out, the lack of which was one of my few complaints of the original Tempest. I was a big fan of the Tempest, the only hesitation of housing my test rig in it was the thought of dismantling and removing the entire board every time I needed to swap a cooler. The EVO remedies that problem, allowing access to the CPU from the opposing side.
If you haven't noticed by now, the EVO's interior has an all painted interior, a finish that NZXT has done a nice job with. This eliminates yet another one of my complaints of the original Tempest; with a windowed panel as nice as this line has, its a shame to blemish it's appearance with that dull factory gray. 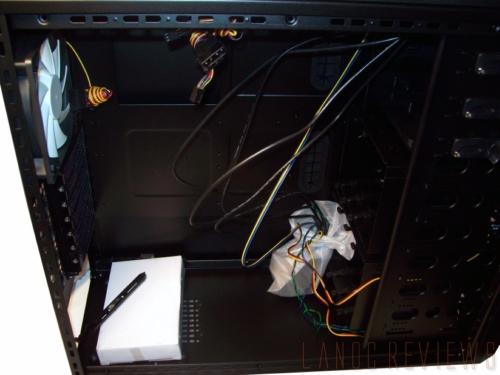 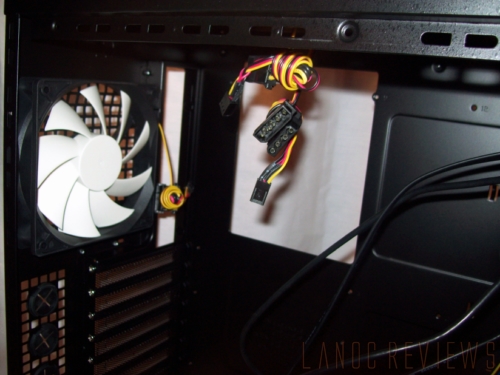 That windowed side panel has seen an upgrade as well. Instead of the clear transparent window featured in the past model, the EVO is equipped with a sharp 'smoked' acrylic window, which blends better with the black finish and gives your hardware a nice hue while still providing visibility. 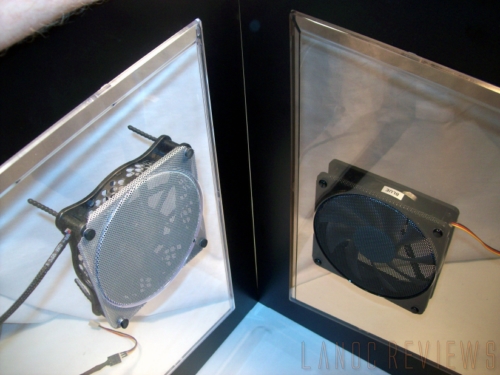 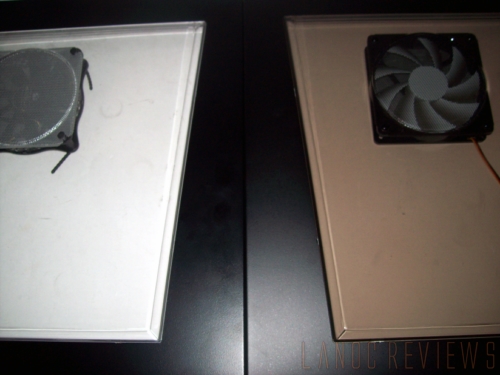 The power supply is once again bottom mounting, but this time features four feet for the unit to rest on instead of a single block to elevate it, as in the Tempest. Expansion slots still require old school Phillips to install, but do feature a nice black-mesh placeholder for those unused, with seven available. 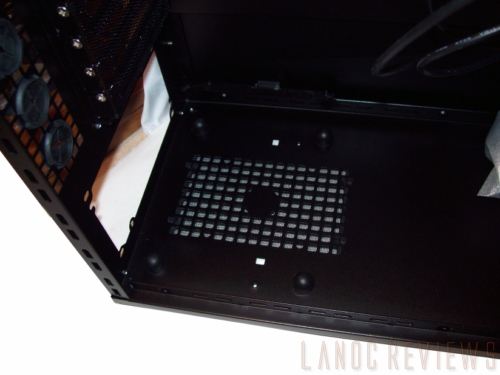 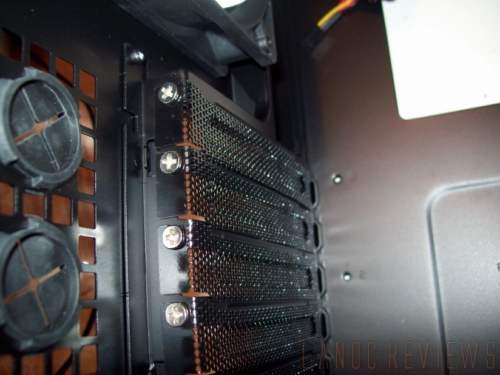 The EVO initally has three 5.25" external expansion bays, accesible by removing the front panel, popping out the place holder, and sliding the drive in. The unit is secured using the same tool-less mechanism featured in the Tempest, a bracket with four rods that line up with the mount areas on the drive, then locks in place with the turn of a knob. Three additional external bays can be utilized, but this requires the removal of one of the hard drive cages. An external 5.25" to 3.5" converter is also included. 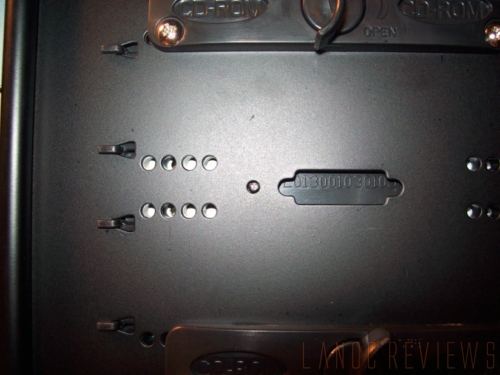 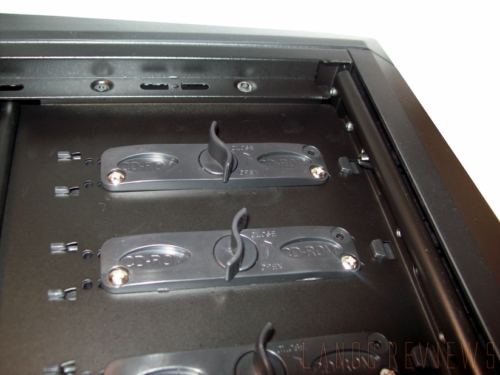 With both hard drive cages installed, there are eight internal drive bays. Hard drives also see a tool-less installation, consisting of attaching rails to the side of the drive and sliding it into position, far enough back to hear a click of the rails into position. To remove, simple compress the two rails to release and pull. 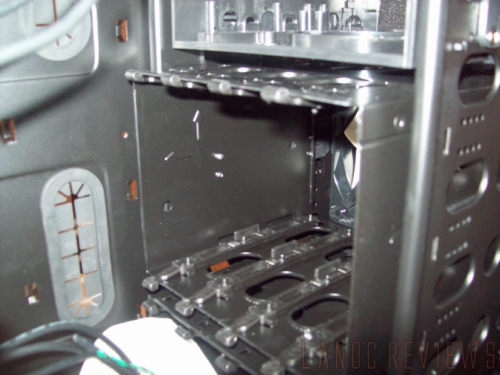 The 'airflow king' does come with a few options for a cooling system. Obviously, the case has been designed to optomize air flow, with a system of two front 120mm intake fans (blue LED), two 140mm top exhausts, one 120mm rear exhaust, and one 120mm intake on the windowed side panel (blue LED). These aren't just fan options, either; all of the fans come installed with the case. 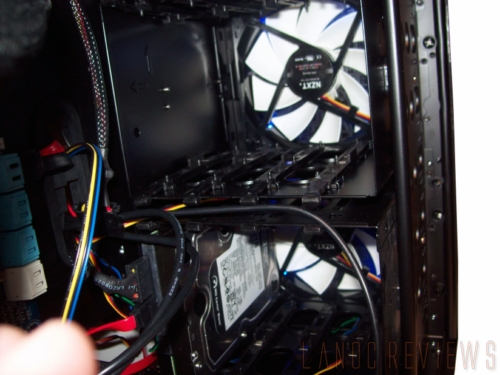 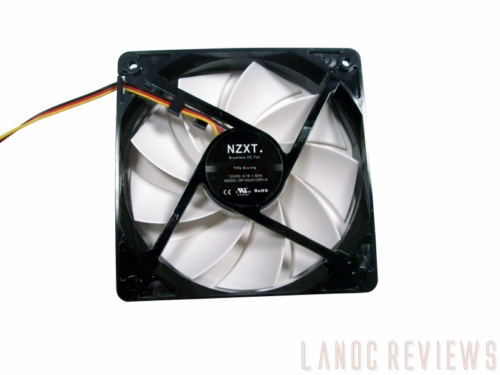 Water cooling isn't out of the question however, with pre-drilling to support tube access and a dual radiator at the top. 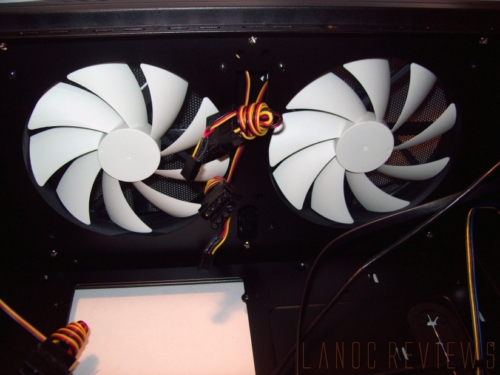 Performance
The Tempest EVO is designed to be much friendlier for the user, shown in a few ways. The first is the mentioned CPU cut-out which allows for easy heatsink installation and removal. Cable management has also been focused on, first with a bay on the solid side panel that allows more room for routing behind the motherboard tray. The holes leading behind the tray are also equipped with rubber grouting that helps to hide the cables. 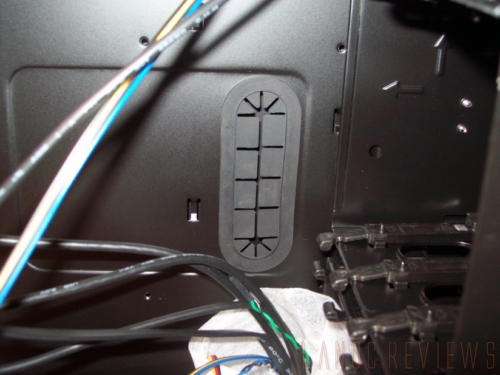 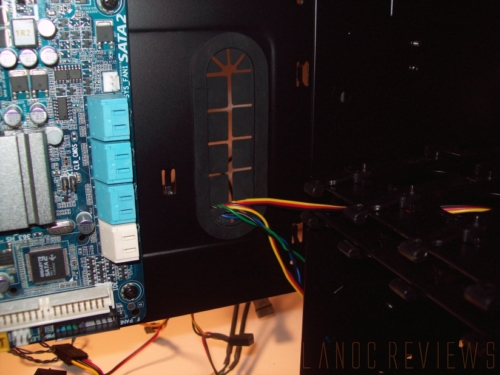 The case fans included with the EVO have also been upgraded to increase airflow and decrease noise levels. Featuring a nine-blade design, the system stays cool and is nearly unaudible while doing so.
Most noticable is perhaps the overall apperance of the Tempest EVO. While the original was still very appealing, the EVO goes above and beyond, scoring points with a dual interior/exterior black finish, complimented well by the smoked acrylic window panel and the blue LED theme. 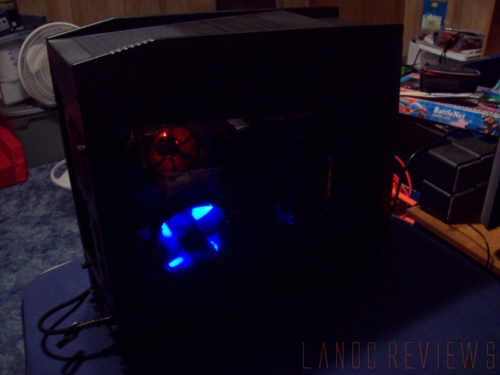 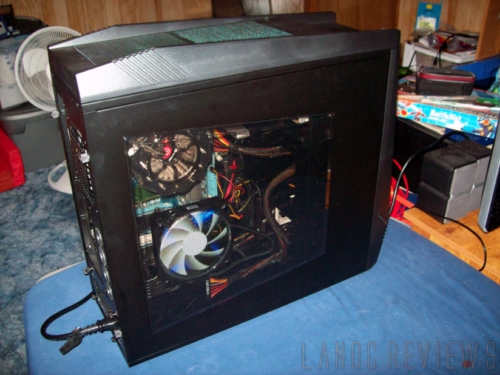 Overall
NZXT provided me with a good experience with the original Tempest, though I found room for a few suggestions. The Tempest EVO succesfully kept all the aspects I loved about the original and addressed what issues I did have to create one of the best mid-towers I've reviewed. Even more impressive is that the EVO MSRP's for nearly twenty dollars cheaper than it's predecessor. With great airflow performance, enthusiast hardware support, plenty of room for storage, and a slick appearance, there's no reason not to spoil yourself with this case. 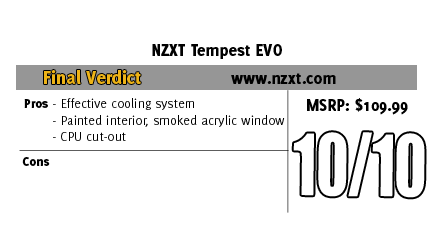 Author: Lersar
Contributing Editor / Event Staff
Adam is a big proponent of LAN parties, esports and speed-running, and helps organize our semi-annual LAN events. He has covered hardware and software reviews of a wide variety, but most content these days come from event coverage, such as other LAN parties.
Discuss this article
Log in to comment
Posts in discussion: NZXT Tempest EVO