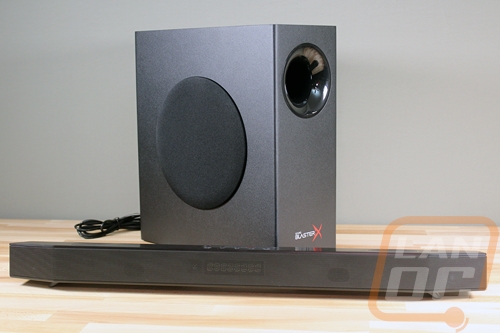 While Creative isn’t even the only company to be focusing on an under monitor audio solution the Katana really stands out because they have been able to take what has worked so well with things like the X7 and fully integrate everything all together for a simple to hookup, space-saving audio solution. The main unit fits up under your monitor and doesn’t use up any extra space and the sub follows the same theme with a smaller footprint than you normally find. The audio performance was great in all of the situations I put it in. That is because unlike a normal PC speaker setup, the Katana also has a high-end DAC built right in. Having just the two speakers and with the DAC and everything built in hooking everything up was easy as well.

As I mentioned in my testing, the sub did fall off at high volumes for me. It doesn’t help that I’m used to the powered sub on my own setup that has the same wattage just for the sub that the Katana has just for itself. In other words, the Katana is amazing as long as you don’t compare it with a setup that costs 3 times as much. Beyond that issue, I would also love to see them integrate a dock for the remote control.

So where does the Katana fit in the market? Well, it is a good option for anyone lacking is desk space or looking for a minimalistic setup from a speaker/space perspective. Where I think it shines the most though is for people who are running onboard audio. The DAC and audio controller on the Katana doesn’t have the connection options of their X7 but it brings similar performance down in the reach of more people. The Katana runs about $100 more than the Razer Leviathan and while I haven’t tested the Razer that extra money is a steal for the control you get in the EQ and the overall audio performance. Sound Blaster sells the E5 portable DAC for just about $200 along and that is similar to what you are getting inside of the Katana. So look past the trendy RGB lighting and you will find that the Katana is a good almost all one PC audio solution. 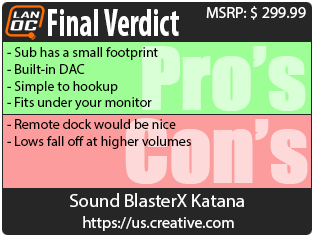 You might call him obsessed or just a hardcore geek. Wes's obsession with gaming hardware and gadgets isn't anything new, he could be found taking things apart even as a child. When not poking around in PC's he can be found playing League of Legends, Awesomenauts, or Civilization 5 or watching a wide variety of TV shows and Movies. A car guy at heart, the same things that draw him into tweaking cars apply when building good looking fast computers. If you are interested in writing for Wes here at LanOC you can reach out to him directly using our contact form.
Discuss this article
Log in to comment
Posts in discussion: Sound BlasterX Katana

We have 1763 guests and no members online