When testing anything sound related its always best to have something to compare to, highs and lows can sound great until you put them up against something else. In the case of the EB110’s I went with my personal pair of Klipsch S4’s, they lack the on cord controls of the EB110’s, but are still of good enough quality to be able to compare sound quality and comfort. For music I went with a few different songs to see how each handled rock, rap, and other genres. Rap and Rock for example really benefit from good bass and highs, but putting on a little Nat King Cole or Beethoven won’t sound as good with over boosted highs and lows. To cap the test off we test them both out in game and in an action film covering most other uses. 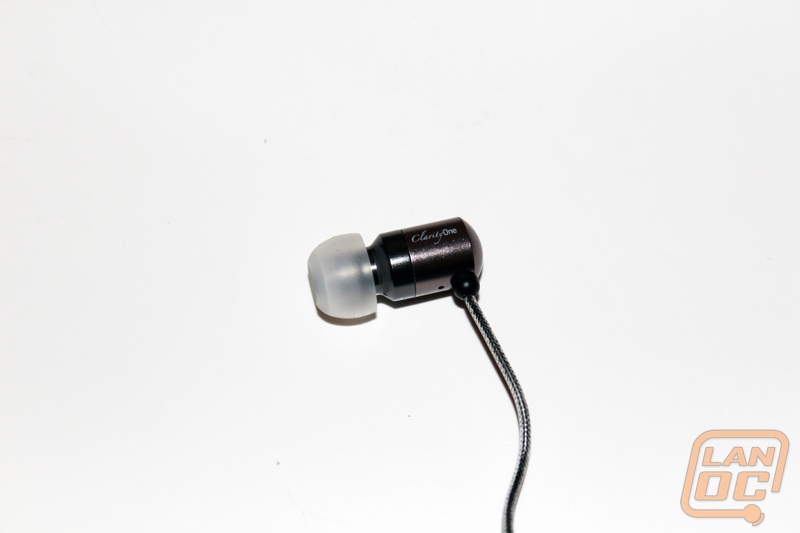 Bone Thugs N’ Harmony Tha Crossroads- With lots bass along with a nice variety of highs and low with their harmonys, this is a good song to compare the two earbuds. Both sets sound amazing with rich highs and lows, but when directly comparing I found the EB110’s to have a slightly crisper highs and a little more brain rattling bass. It goes with this song very well but I am curious how it will affect other songs.

Eric Clapton - Rush (Soundtrack) - 10 - Tears In Heaven- The increased bass and highs wasn’t noticeable at all through this song. Infact I wasn’t able to tell a difference between the two earbuds this time around. They both did a good job with the details in the song, reminding me how nice it is something to hear details like the guitar string being picked.

Nat King Cole & Natalie – Unforgettable - This song has a range of instruments combined with the two voices of Nat King Cole and his daughter Natalie. This interesting combination not only makes this song unforgettable, but also very unforgiving with audio. The additional bass is a little to boomy early in the song when Nat sings the lower notes, but later on in the song it seems to even out and sound great. At the end I enjoyed the sound of the Klipsch’s slightly more, only because the EB110’s pushed the highs and lows in your face in a song that in my opinion needed no adjustments at all.

Ludwig van Beethoven - Für Elise- A very light recording with a good portion of the music falling into the highs and lows, this normally favors a flat EQ. As expected the Klipsch’s came in light and flat, but I was more surprised that the EB110’s actually enhanced the song. Generally I would prefer this type of music with no boosts at all, but I was happy with the EB110’s performance.

In Game – Battlefield 3- Big Bass and crisp highs are important in battle games like this as are the details. It’s important to be able to hear your enemy coming even if you can’t see them. While playing trying out both pair of earbuds I was impressed with both but side with the EB110’s because of their extra bass and highs.

Movie – 2009 Star Trek Blu Ray- This movie is one of my favorites both for its visuals and also for its sound effects. My experience with moves varies very much, some movies benefit from a little extra bass but in the case of Star Trek I found the additional bass and highs from the EB110’s to be a little too much.

Beyond performance, with all headphones, but especially earbuds, it’s important for them to be comfortable. Once again I went with comparing the EB110’s to the S4’s. They both have similar rubber umbrella designed comfort pads and come with different sizes to fit different ears. The EB110’s go straight in while the S4’s are angled depending on the ear. Personally I found the angle design to be easier to figure out what bug goes into what ear on the go. The EB110’s are thicker under the umbrella and it is noticeable when comparing the two one after the other. They are both comfortable on their own, but when you can compare the two I found the S4’s to be more comfortable in my ears. 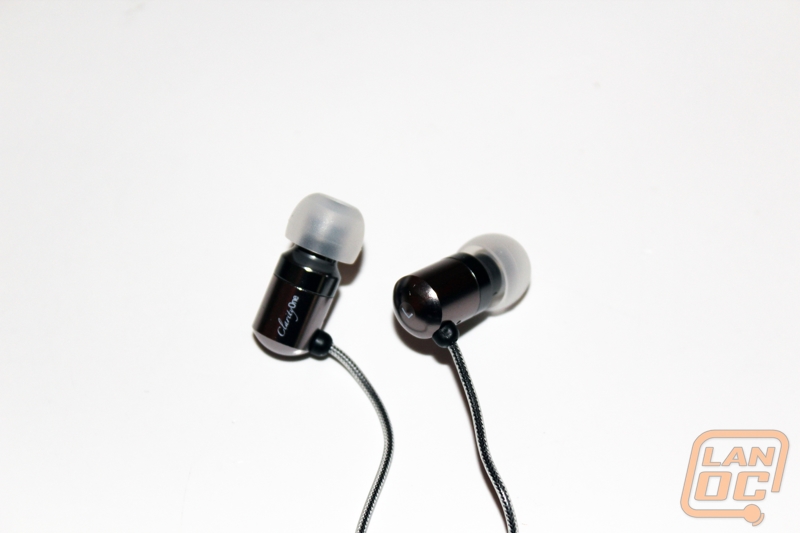 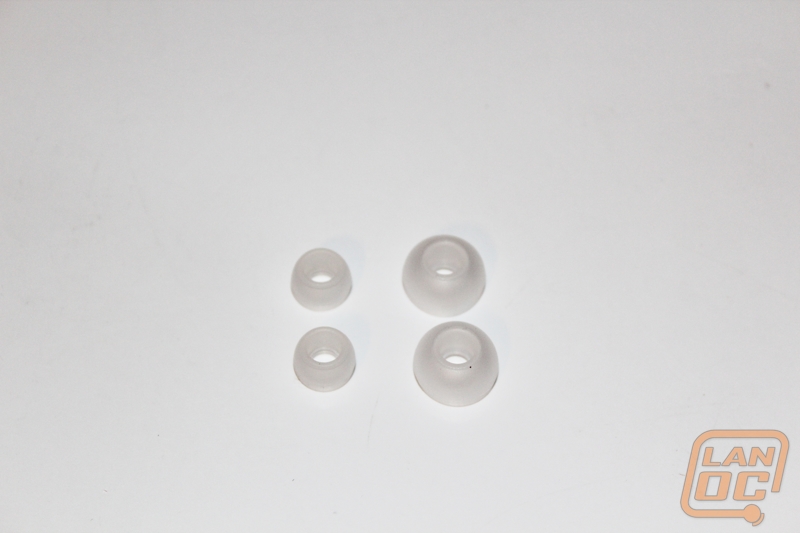 The EB110’s did have one other trait that I found interesting. Because of the all-aluminum design, if you get them near each other that make a noticeable clicking sound. In one way the all-aluminum design is nice because of its strength, but it’s a little weird getting used to them banging together when wrapped around your MP3 player or tablet. Speaking of, the EB 110’s also have the built in touch sensitive track control for skipping between songs or pausing and playing. They also slipped in a small microphone in this same area in case you need one; it’s nothing amazing but useful.

Last but not least we have the cord itself. The length on the EB110’s cord is much more than on the S4 and on any other earbuds that we have in the office, to the point where you might find yourself trying to wrap up extra more often than not. The Plug isn’t right angled like the S4’s, I would have preferred right angle myself, but this is a preference call. The rest of the cord is silver in color with a protective plastic coating covering it from end to end. I have no worries that the cord will hold up for a very long time. 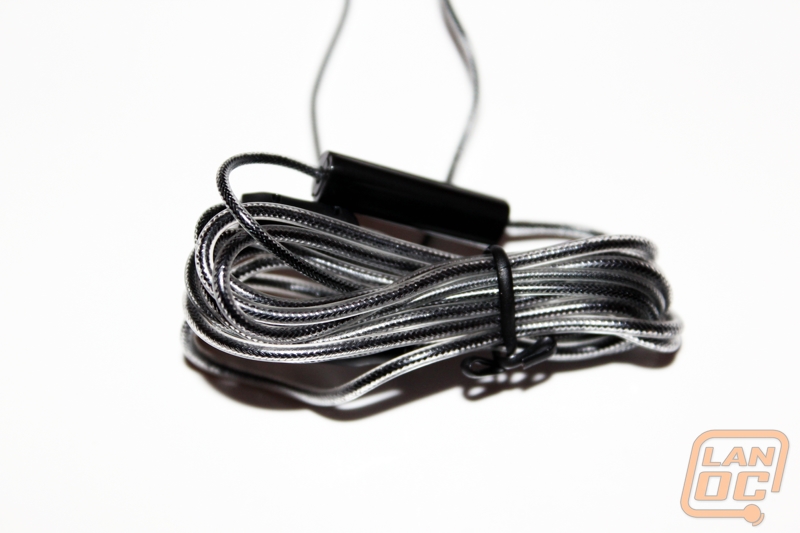 Guess i'm not just as hard core, but $130 for ear buds seems a bit much. (This is coming from a guy who rocks a $30 set of sony head phones anda $40 Microsoft ergonomic keyboard...)

The design is good, but i've always been a fan of the over the ear, at the gym, it's easier to have them half in to listen to announcement, or when on a bench, they don't fall out.

Good review, maybe they'll send up a few pair to try out at the next LAN.

What about having some of the products in a demo station so that we could try out all these products? Plus youcould raffle them off at the end!

Like i said, it just depends on what you like and how much you value them. I could see the need for these on an airplane like the guy in the picture is, but for PC gaming, i always like to hear what's going on around me. I guess i'm a little paranoid when it comes to things. I wanna know if my kid is crying, or the guy across the room is angry that i killed him...