A Visit to Atomic Filament 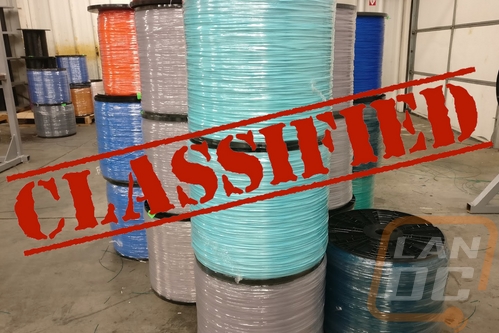 A few weeks back while visiting SeeMeCNC to pick up my new Artemis I had an interesting opportunity pop up. You see last year when SeeMeCNC moved to a much larger building Atomic Filament moved from California into the same building. Well, they invited me (and my wife) over to check out their setup. This in itself is interesting, I’ve never seen filament being made, but what a lot of people don’t know is Atomic Filament is basically the Area 51 of the printing community. They are known for their extremely high-quality filament, but to protect that they are very careful on who can come visit.

Okay so for starters, when it comes to protecting trade secrets, you can imagine taking photos around the facility aren’t exactly going to go over very well. In fact, my first experience with Atomic was my first visit to the new SeeMeCNC building where I was told to avoid taking photos down in that area altogether. Frankly, I completely get it, Atomic is known for their quality, why risk a competitor getting any clue on how you manage to do it. So there is only so much I can show from my visit.

That said I did get a good look around but by the time I got there the lines weren’t running any longer and they were just working on respooling and packaging. They had just finished a brand new color Silky Electric Blue PLA. They hadn’t even gotten the stickers made yet so when they grabbed me a role they did up the stickers and set us up. It isn’t very often you get new filaments hot off the presses. But I will talk a little more about that here in a minute. 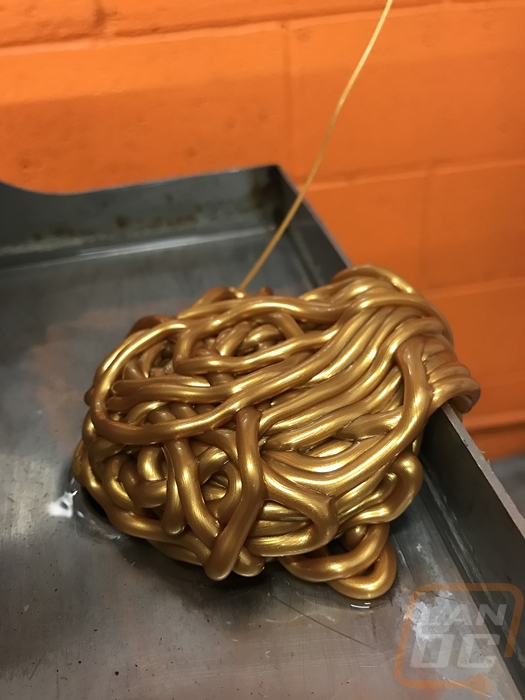 If you didn’t know, PLA is a plant-based plastic so spotting the big pallets of pellets in their shop with “from plants not oil” wasn’t a huge surprise, them letting me take a picture of it was a bigger surprise though! 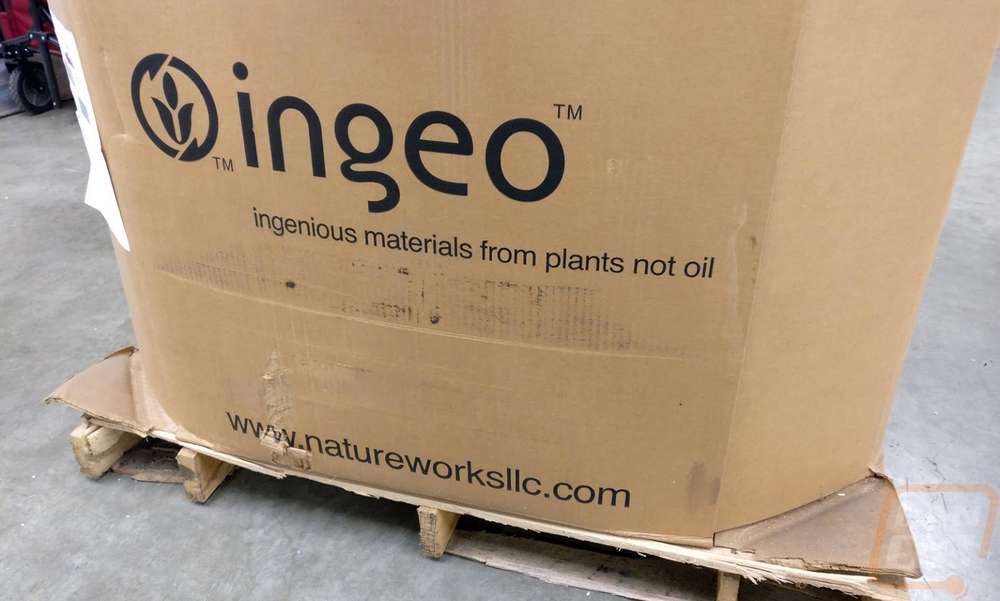 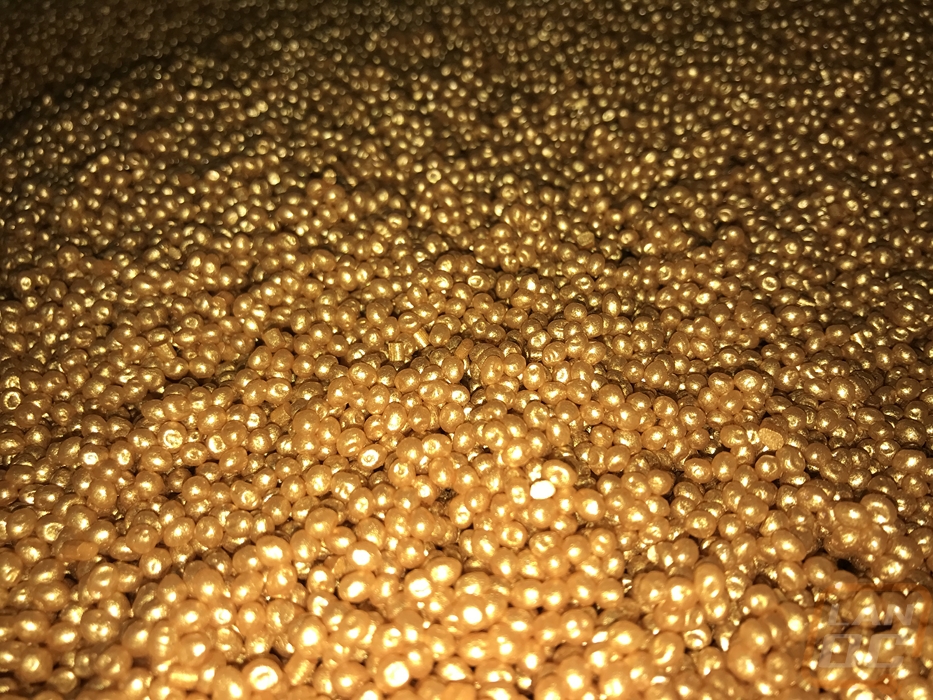 I think the most exciting thing was the huge piles of the full spools before they are respooled down to what you are used to seeing. Honestly, the only thing keeping me from grabbing one of those huge orange spools was them being so heavy, myself being so out of shape, and the car being a LONG way away. Who wouldn’t want one of these in their maker space?? 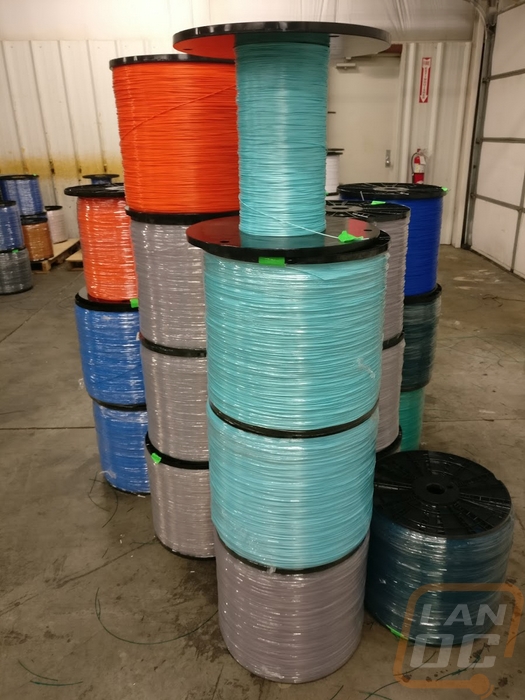 For scale, I give you one wife. It seems crazy as I sit in the 80+ degree heat right now to think that just weeks ago when we were there it was heavy coat weather. 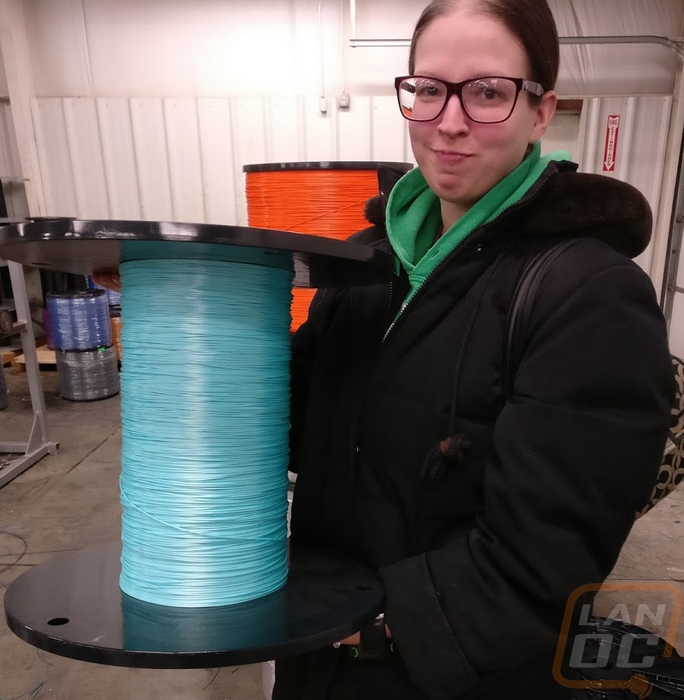 Because there was only so much to show in photos of the shop, I also figured I might dive in a little about my experience so far with Atomic Filaments. I actually picked up my first few spools last year and have been printing with them on and off. Then of course on this trip, I really loaded up and because I’ve been busy I haven’t even gotten to try out all of the colors yet. But I didn’t waste any time checking out that new Silky Electric Blue PLA. According to Atomic, the plan is to bring out all of their colors in the silky line eventually. I don’t have to tell you that the silky orange is going to be right at the top of my list. I may have to beg to come see it come off the line! 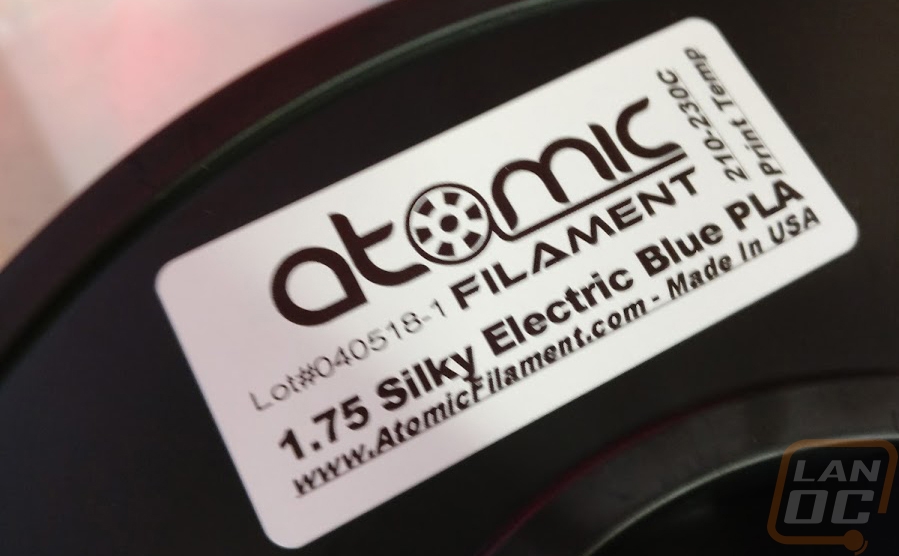 So that first weekend I printed with the Silky Electric Blue PLA and this vase really sums it all up. The silk basically highlights different angles, especially with lighting in the room. To print it, I didn’t have to make any changes. SeeMeCNC has been testing with Atomic for a while now so their profiles were spot on for it, but I also have used them on the Prusa MK2S with great luck as well. 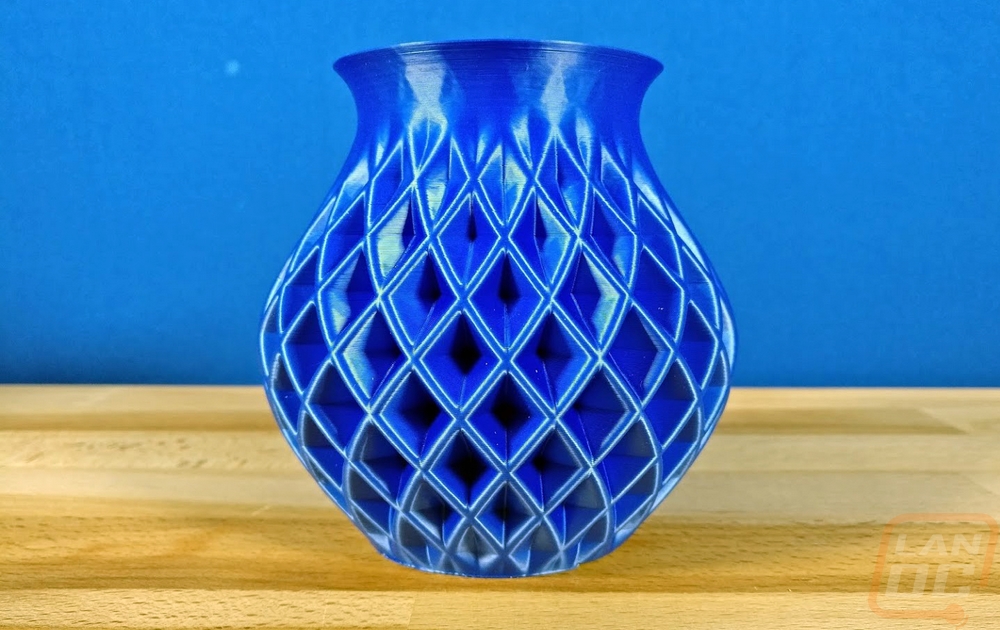 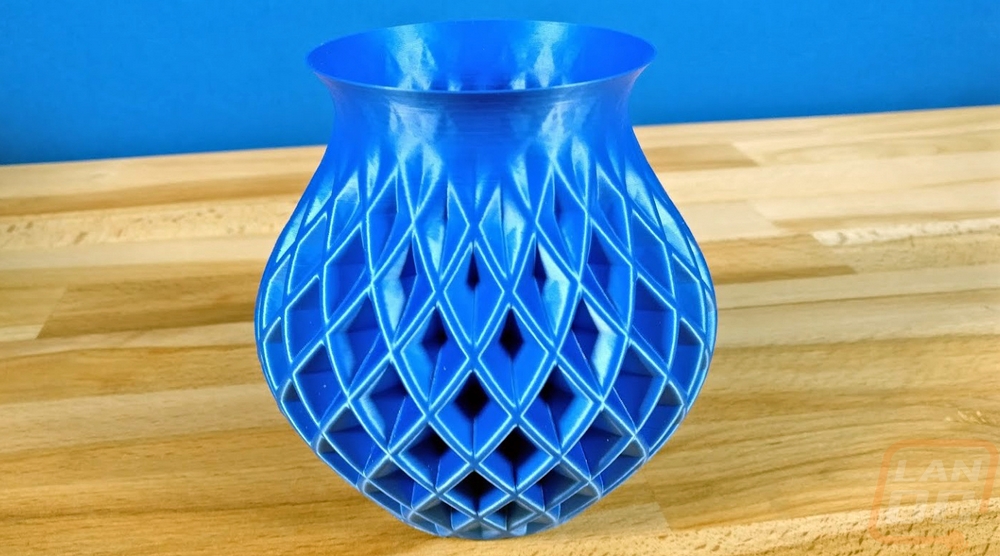 I’ve gotten two spools of the Starry Night and have been printing with it a lot and it has been especially interesting. Unlike most of the other colors, this is one that the color changes depending on the number of outer layers and the overall size. For example, I printed a Matterhackers Phil at 420mm tall (come on Matterhackers this should be listed as your new record) with no infill and it looks extremely blue. When printing small items as it gets darker it is almost a purple. Then, of course, you have all of the glitters inside. 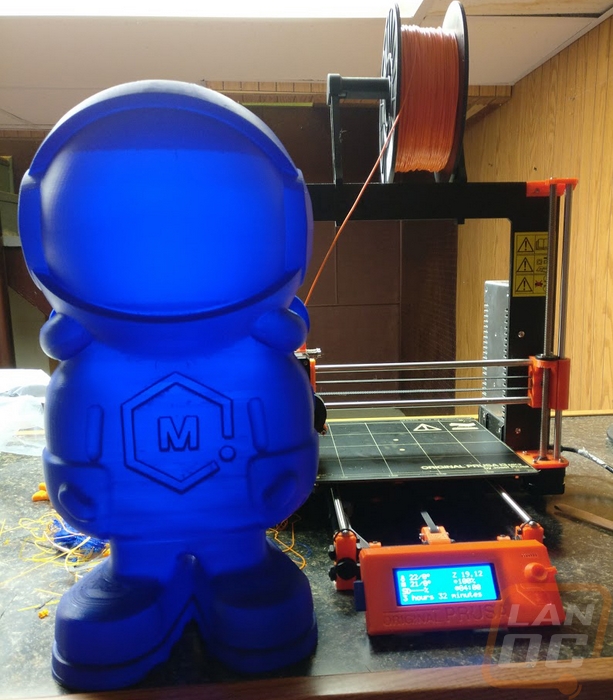 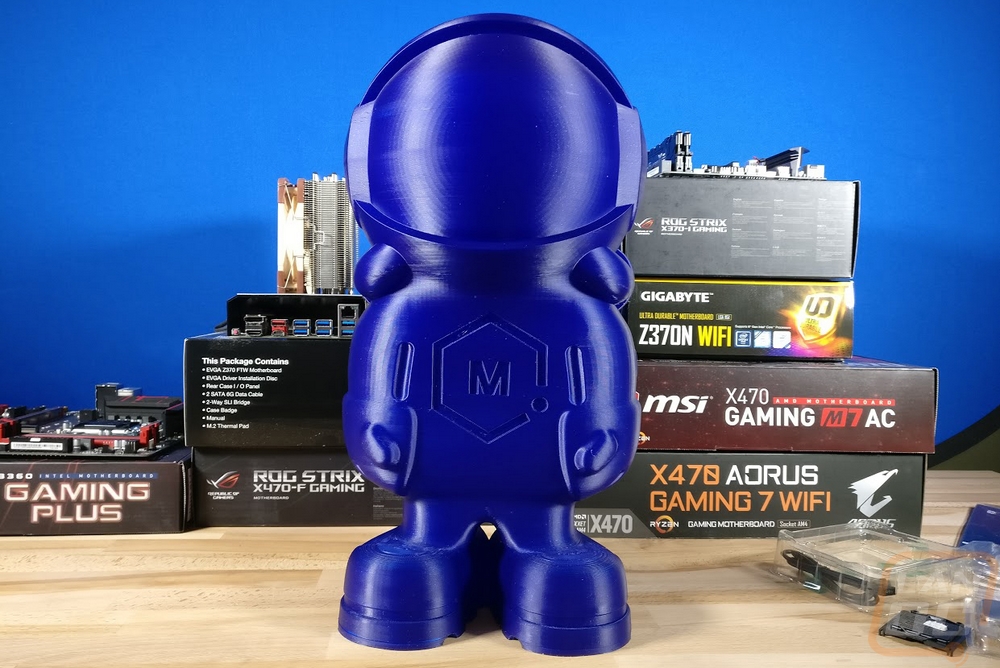 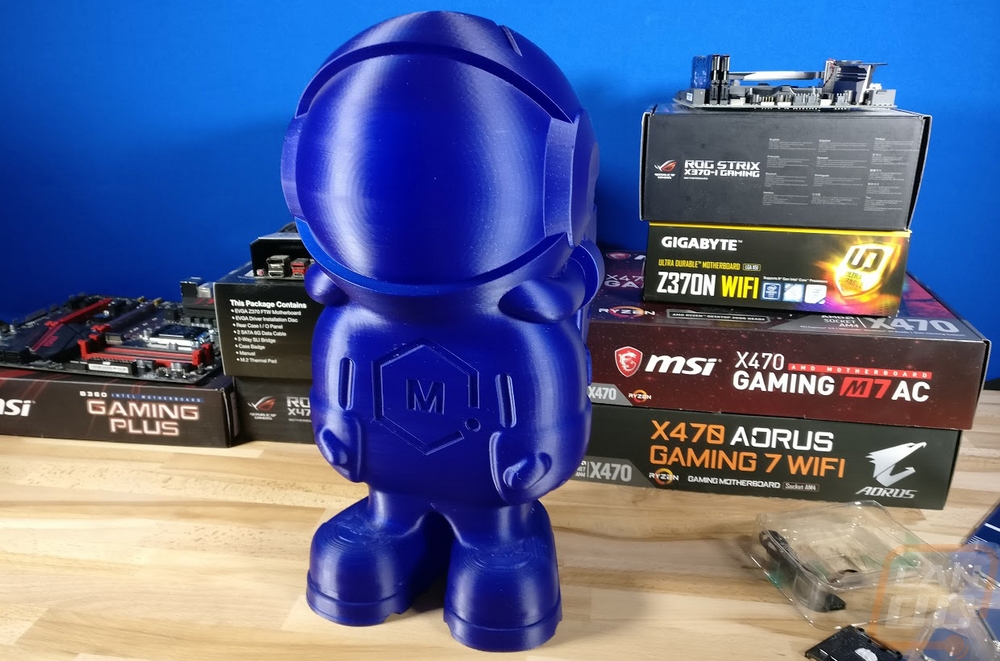 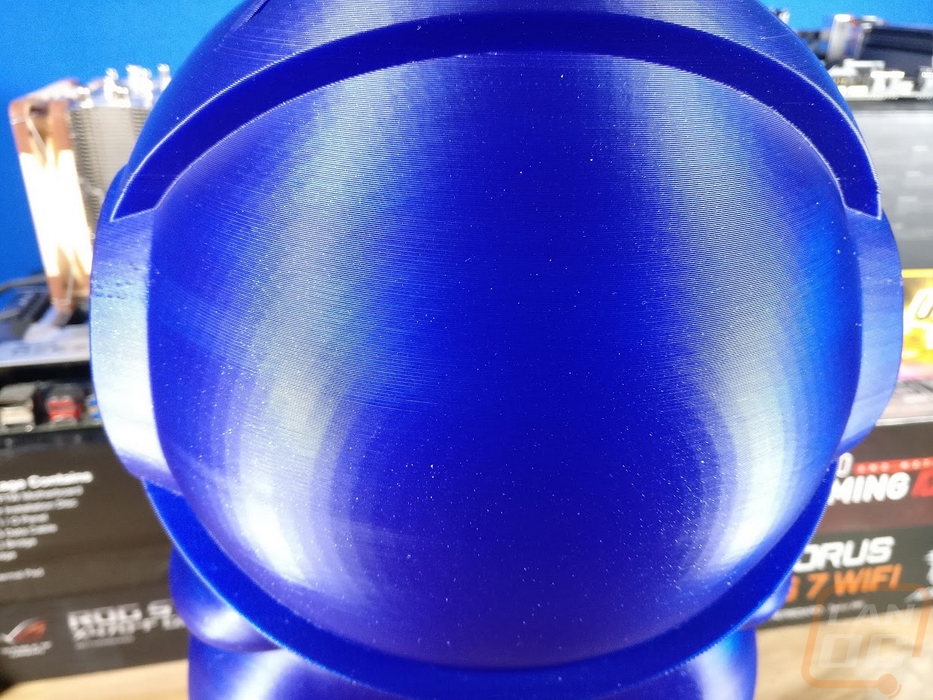 Atomics clear PLA has to be the most impressive though. Most clear filaments really have a touch of yellow and are hazy. This goes down nearly perfect. The first few layers look like glass. It is unique in that the printing pattern is important so when printing a clear front for my Nixie Clock I changed things up and did a design. 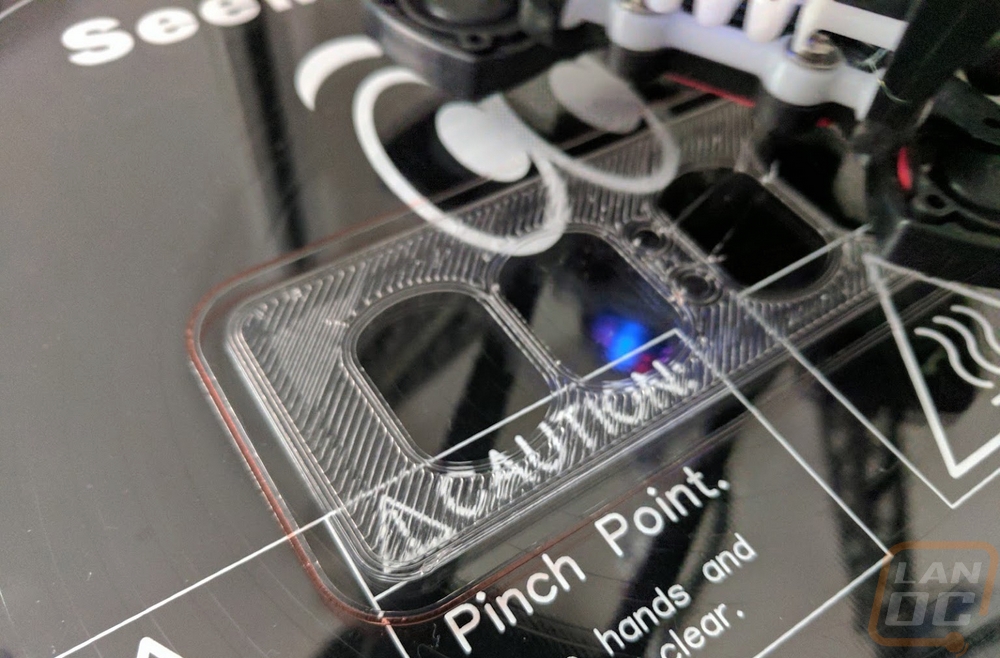 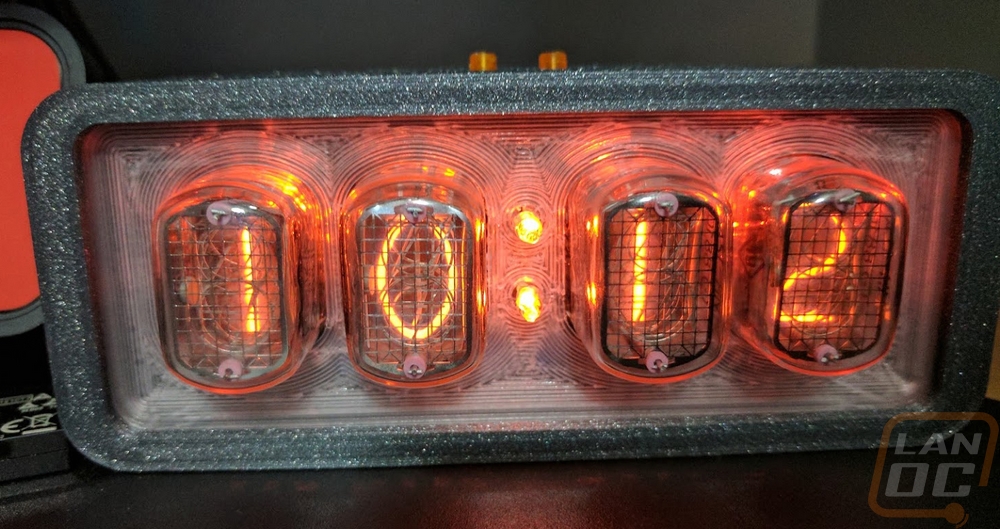 Another project I did a while back was the Rick and Morty Portal Gun. I needed a transparent top the Translucent Neon Yellow ended up getting the job done perfectly. 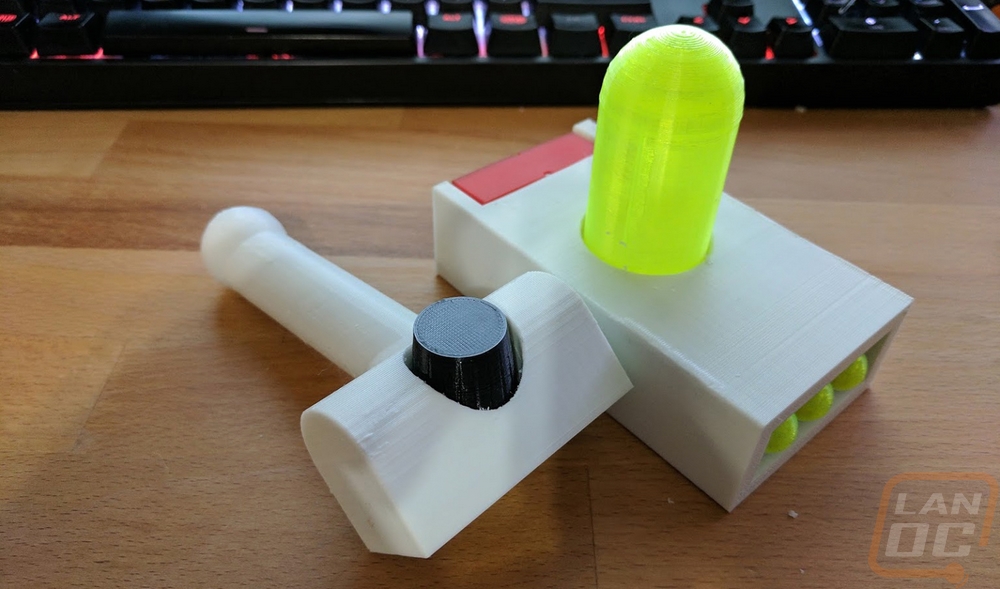 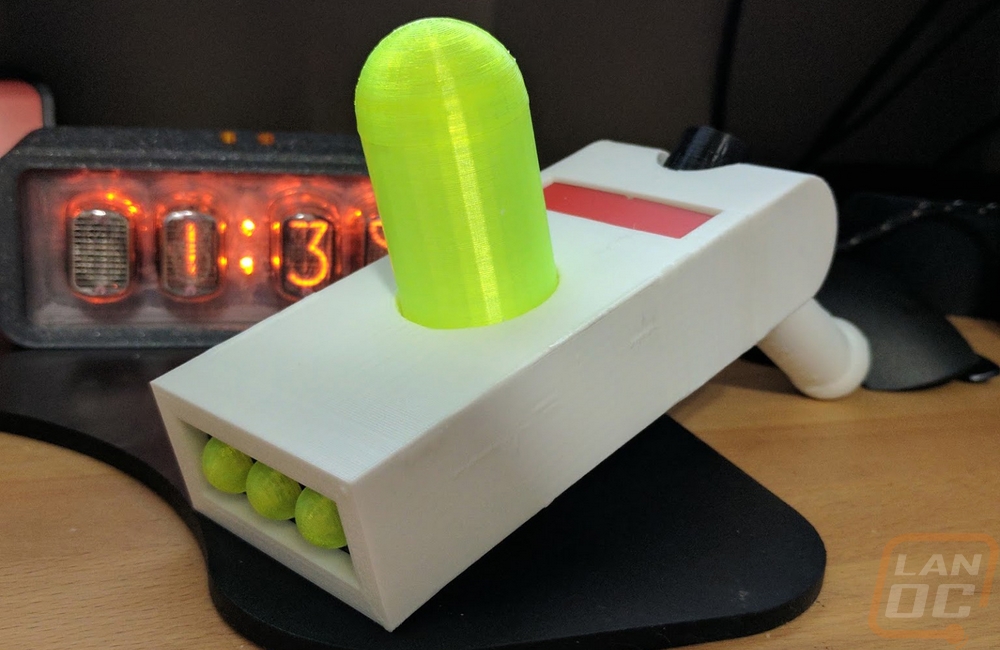 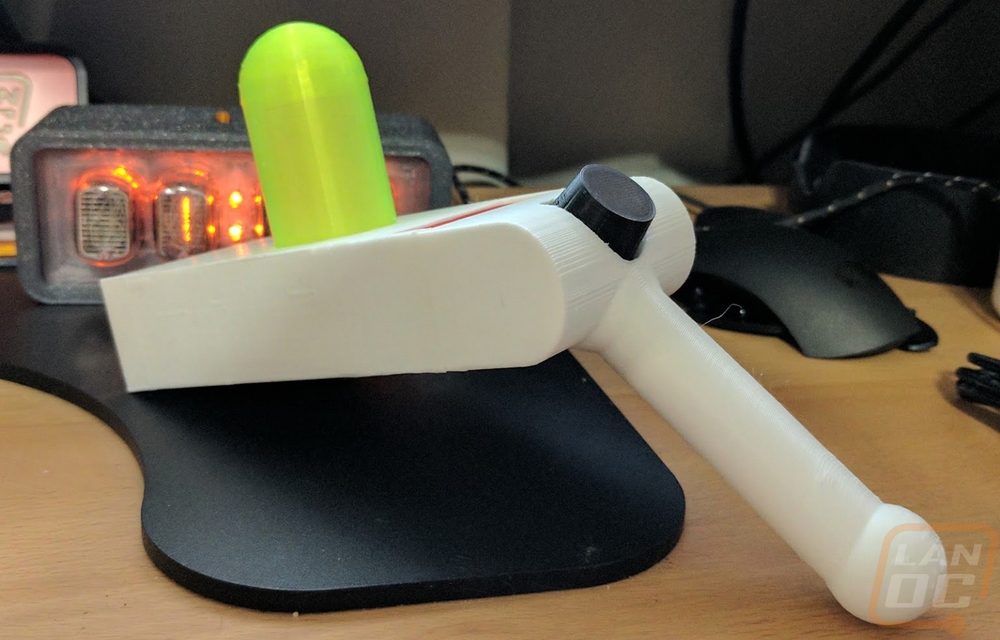 I’m also really digging the Amethyst Violet Gemstone Translucent PLA. I actually used this for a Geode City print that I did at double scale. The model was designed to be used with transparent or UV filament and amethyst is perfect for the geode look. To really set things off I also picked up LED lighting to go inside and hot glued the lighting in and the print altogether. 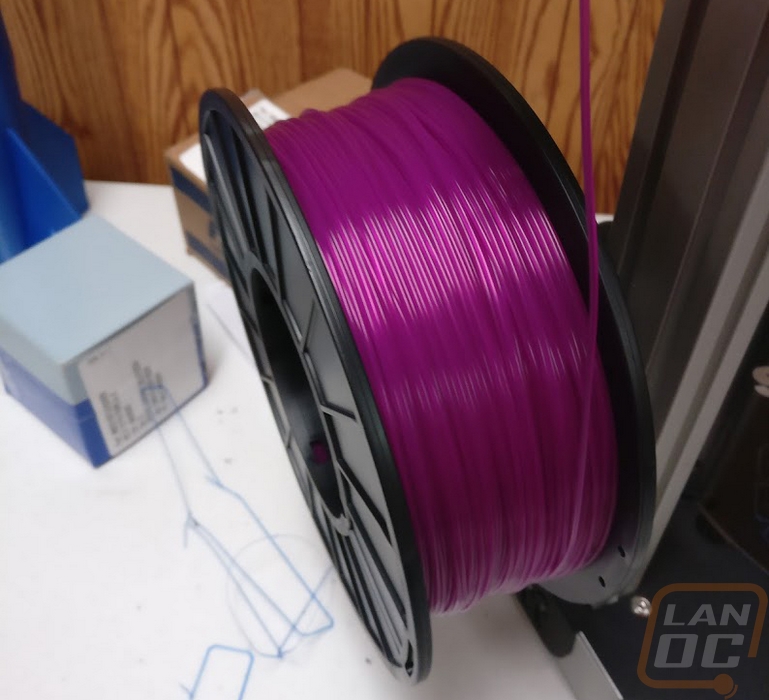 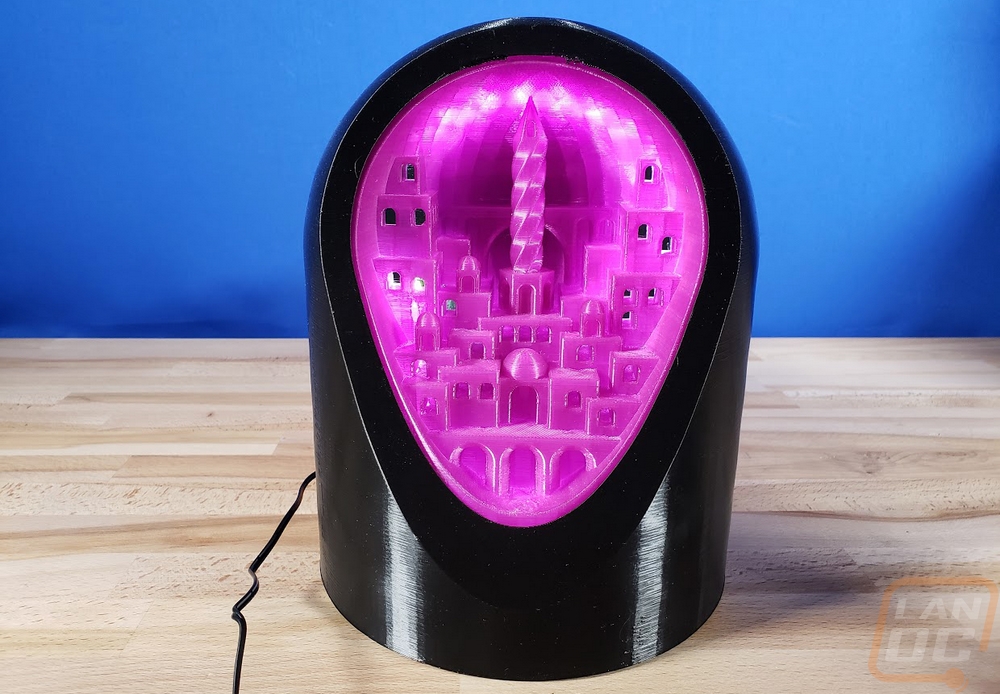 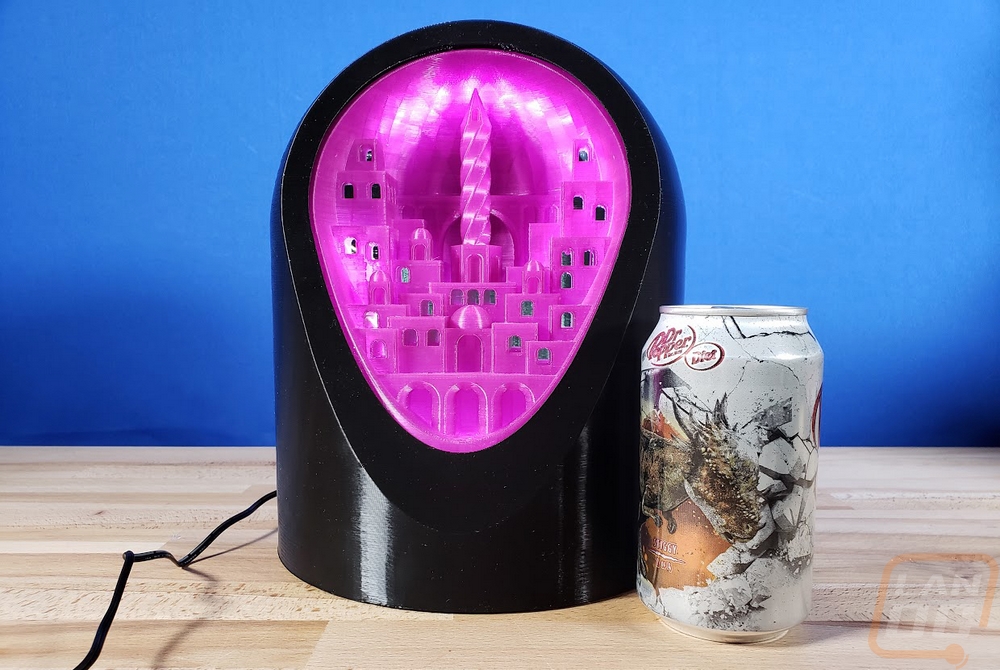 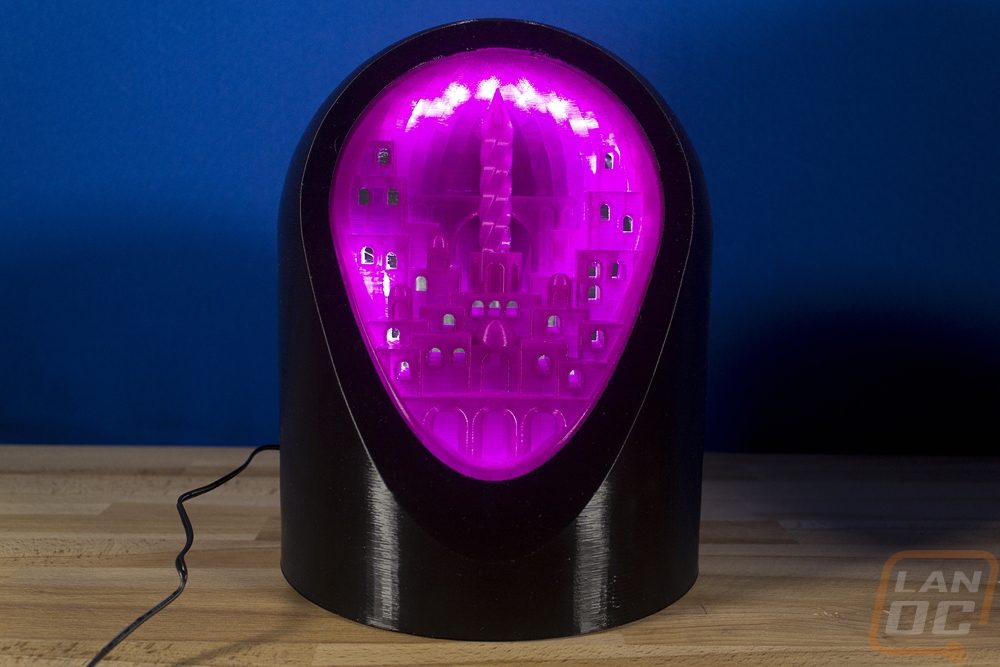 I also put together a basic time-lapse of the prints. They were all done on Atomic Filament using the SeeMeCNC Artemis 300. The outside casing took 24 hours for the top portion and 5 for the bottom and the Amethyst inside took 18 hours. Plus getting the lighting in.

Most of you know about my irrational love for orange. So I couldn’t check out Atomic Filament without checking out their orange. I’ve been printing standup LanOC logos for a few friends and companies I work with. Up until now, I’ve been doing them in the SeeMeCNC orange (that is going away). I’ve got shelves filled with prints in that same orange. But just putting the Atomic Perfect Orange next to them makes me want to toss them all and start over. It's crazy how happy I was with the original orange until I had this next to it. 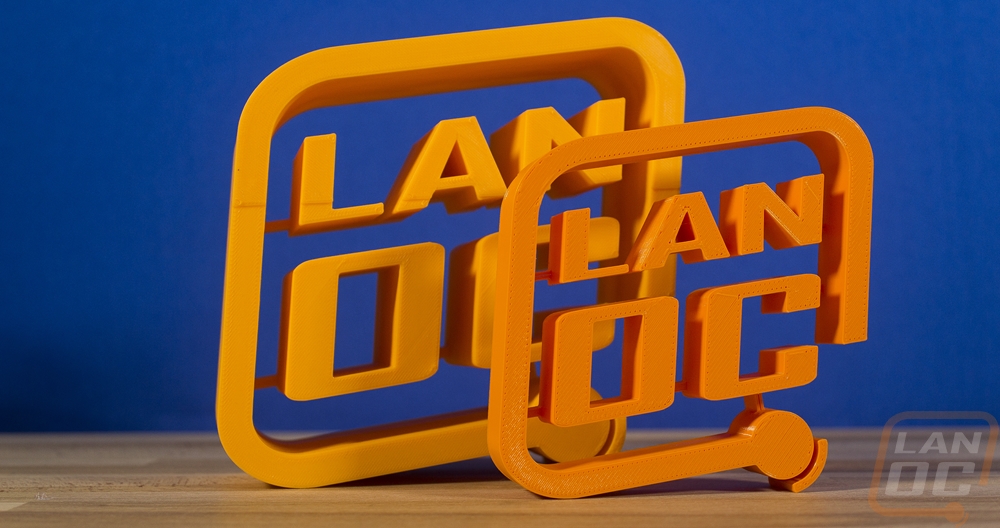 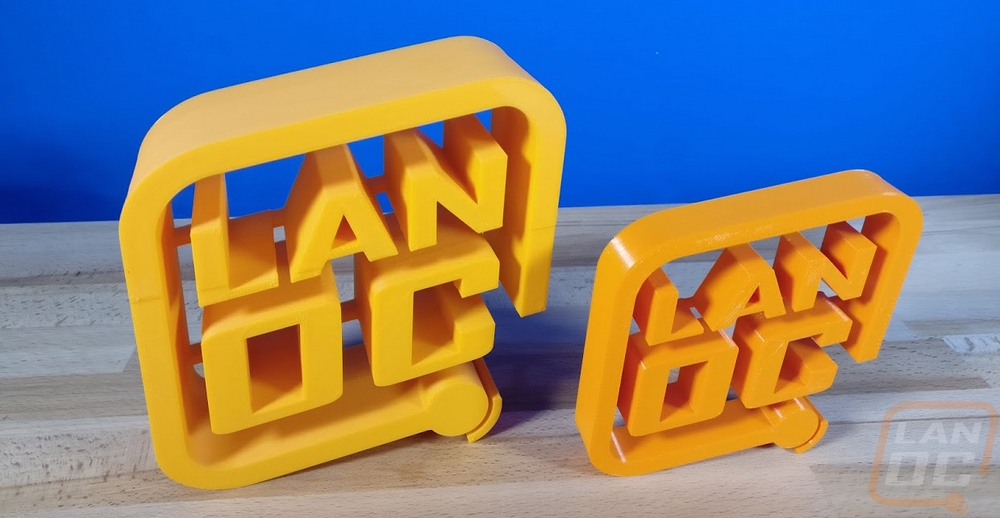 So I know this ended up being a very short factory tour, but overall a quick look at what I’ve been printing with Atomic Filament. Beyond the new blue they gave me, they did not sponsor any of the other projects or prints. So with that in mind, I want to say that the reputation that Atomic has gotten with their filaments is well deserved. It prints consistently every single time, even switching between colors didn’t require any changes on my part. This is because of their attention to detail. Now there are other filaments I am and will continue to print with, but this is what I’m going to use when I just need my prints to work without any adjustments.  Also a big thank you to Atomic for having my wife and I for the unexpected visit.

You might call him obsessed or just a hardcore geek. Wes's obsession with gaming hardware and gadgets isn't anything new, he could be found taking things apart even as a child. When not poking around in PC's he can be found playing League of Legends, Awesomenauts, or Civilization 5 or watching a wide variety of TV shows and Movies. A car guy at heart, the same things that draw him into tweaking cars apply when building good looking fast computers. If you are interested in writing for Wes here at LanOC you can reach out to him directly using our contact form.
Discuss this article
Log in to comment
Posts in discussion: A Visit to Atomic Filament

We have 969 guests and no members online