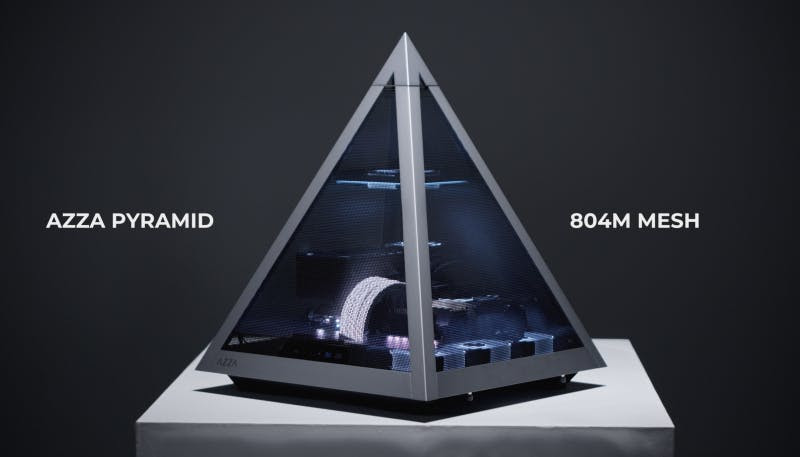 October 4th, 2022, Taipei, Taiwan – AZZA, a leading brand of computer cases and accessories, is proud to announce the PYRAMID 804M MESH. Designed for maximum airflow, the PYRAMID 804M MESH features fine steel mesh side panels that still allow for full transparency of the build, and maintains a CNC-milled anodized aluminum frame, giving the case a futuristic and premium look. The iconic pyramid shape of the case allows for a 360° view and ventilation of the computer hardware. The PYRAMID 804M MESH can support up to E-ATX motherboards, ATX power supplies, and GPUs up to 330mm in length with an included PCIe 4.0 riser cable for modern cards. The PYRAMID 804M MESH is available at $419.99.

Balance of Airflow & Transparency
Improving the original design of the PYRAMID 804, AZZA revisited the CNC-milled aluminum cover of the revolutionary-shaped case by replacing all tempered glass panels with a fine steel mesh but still maintaining enough transparency to see the components inside. The result is a new look that lets airflow enter and escapes from all sides, efficiently and elegantly keeping the computer cool. Anchored to the case’s body by four captive thumb screws, the exterior can be easily removed for quick access to the PC hardware.

Fit for High Performance Builds
The PYRAMID 804M Mesh offers a bench-table style layout with strategically located cable cutouts for PC components. Motherboards up to E-ATX in size and GPUs up to 330mm in length are located horizontally above the motherboard tray, with an adjustable support bracket to hold the GPU firmly, and an included PCIe 4.0 riser cable for current generation high-performance graphics cards. In the lower chamber, a 360 AIO and two additional 120mm fans can be installed to complement the cooling of the included 120mm HURRICANE II ARGB PWM fan at the top. Two additional fans in the lower chamber can be replaced by 2 included trays to host a configuration of 2x 2.5” SSDs or 1x 2.5” SDD and 1x 3.5” HDD.

Behind the case front I/O, which includes a metallic power button, a USB Type C port, two USB 3.0 ports, and HD Audio ports, a removable tray accessible from below the case can support high-wattage ATX PSUs.

Pricing and Availability
The AZZA PYRAMID 804M MESH MSRP is at $419.99 and available on Amazon and Newegg.

About AZZA
AZZA, a Linkworld Electronic brand, is a leading manufacturer and distributor of a full range of computer cases. The company specializes in producing, and marketing uniquely designed computer products. To learn more about AZZA, please visit https://azza.gg/. Connect with AZZA on: Facebook, Instagram, Twitter, and YouTube.