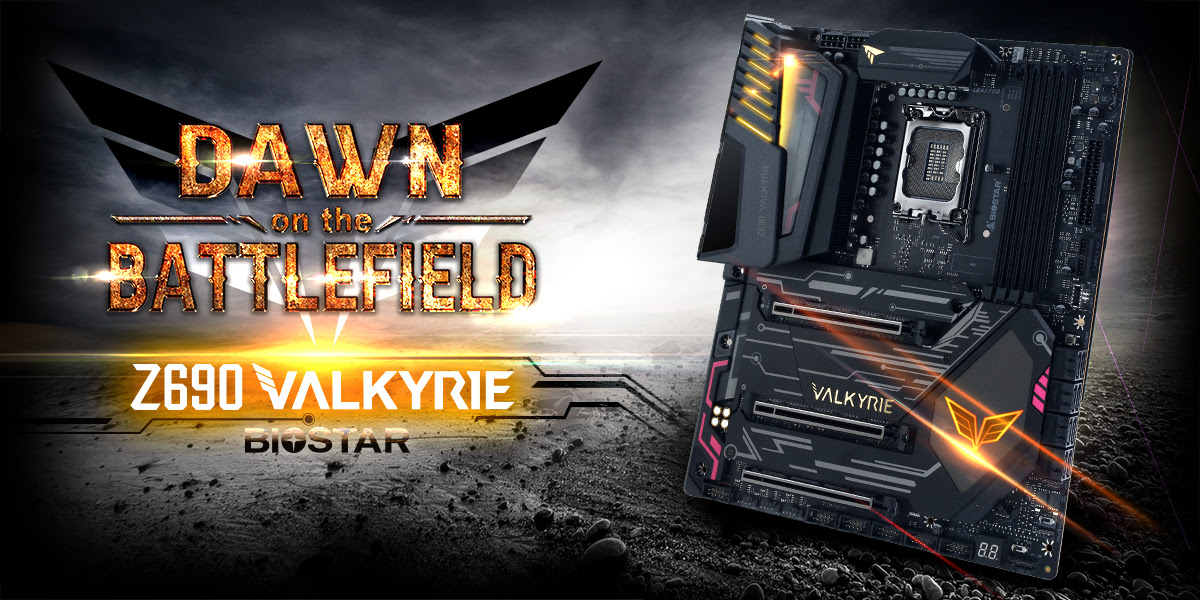 BIOSTAR VALKYRIE Motherboards are tailor-made to be the best and last the longest on the battlefield. With improved components like Iron Slot Protection, Super Durable Inductor/Capacitors, and a moisture proof PCB, these motherboards will overcome all obstacles thrown at them.

Efficient storage technology like PCIe M.2 4.0 (64Gb/s) is a must-have in this generation of motherboards, and the new Z690 VALKYRIE series motherboards come packed to the brim with a layout of smart storage ports. Consisting of 1 x PCIe M.2 3.0 (32Gb/s),3 x PCIe M.2 4.0 (64Gb/s), and 8 x SATA III (6Gb/s) Connectors, users can enjoy multiple storage connectivity with blazing fast speeds for all occasions.

The Z690 and the Z690A VALKYRIE are ATX form factor motherboards carrying a fully decked-out rear I/O panel. 8 USB ports, with 7 of them being USB 3.2 (Gen2) Ports and 1 USB 3.2(Gen2x2) TYPE-C-Port for speedy data transition and connectivity with an extra 1 x PS/2-Keyboard & Mouse Port for users looking for that extra special port for old-school device connectivity is available for users in the rear I/O panel.

Extraordinary audio and video output are a given with all BIOSTAR motherboards, and the new VALKYRIE series motherboards are no exception. With four video output ports consisting of 2x HDMI ports (2.0/1.4) and 2x DISPLAY Ports (1.4/1.2) together with 5x audio ports controlled by ALC1220 audio chipset that provides 7.1 Channels, High Definition Audio, users can experience an unprecedented immersive audio-visual experience like no other.

It is safe to say that the new BIOSTAR Z690 VALKYRIE and the Z690A VALKYRIE motherboards are a class above the rest. With exceptional attention to detail and the use of cutting-edge technology, they are the best motherboards that money can afford.  Gamers and content creators looking to upgrade their systems to the latest Intel 12th Gen processors now have the best choice at their disposal with sleek aesthetics that suit any build theme and unrivaled build quality, the Z690 VALKYRIE series motherboards bring victory to your desktop.

We have 1074 guests and no members online