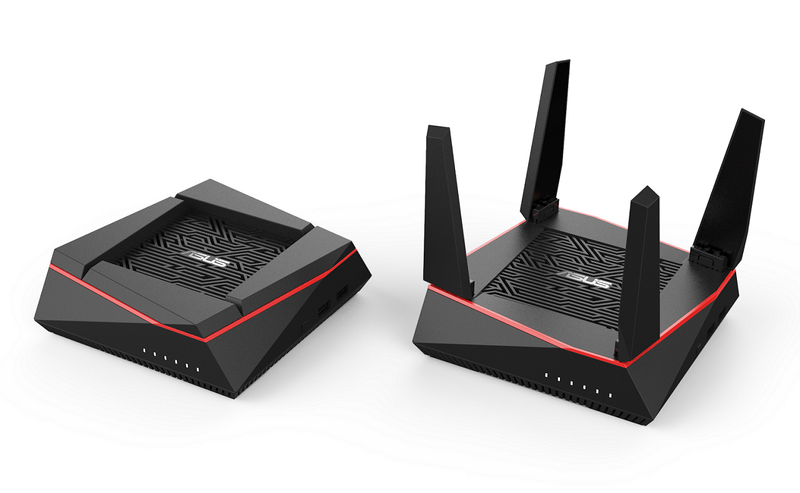 Fremont, CA (June 4, 2018) — The number of wireless devices in our lives is multiplying at a torrid pace. We are bringing more and more connected devices into our homes, including high-bandwidth devices like smartphones, tablets, PCs, game consoles, 4K TVs, digital assistants and an expanding array of IoT gear. That’s a lot to manage under one roof, especially during prime time, when concurrent HD streaming, surfing, and gaming sessions all want their share of available bandwidth. With higher throughput per channel and the ability to pack data from multiple clients more efficiently into the available spectrum, next-generation 802.11ax WiFi is designed for these busy networks.

ASUS is announcing a family of new routers capable of keeping up with your appetite for digital devices. The ROG Rapture GT-AX11000 offers the highest speed and capacity for gamers and enthusiasts who demand the very best. It’s joined by the ASUS AiMesh AX6100 WiFi System, a compact mesh networking system that spreads WiFi between multiple hubs to expand coverage for larger homes, and the ASUS RT-AX88U, a feature-packed router tuned for performance and configurability.

Rule your game with the ROG Rapture GT-AX11000

The Republic of Gamers is renowned for cutting-edge hardware, so it’s fitting that the new ROG Rapture GT-AX11000 is the world’s first tri-band 802.11ax router. It’s built for the most demanding networks, with peak aggregate throughput of nearly 11,000Mbps: up to 1148Mbps on the 2.4GHz band and up to 4804Mbps on each of its dual 5GHz bands. The extra 5GHz band can be reserved for gaming devices to prevent other wireless activity from interfering with your primary machines.

Most wireless routers also include Gigabit Ethernet for wired connections, but the Rapture GT-AX11000 goes one step further with a 2.5Gbps Ethernet port capable of much higher hardline speeds. The extra bandwidth allows a single system to communicate with multiple gigabit-class devices at top speed, or exploit NAS devices that team multiple ports to achieve higher throughput.

Game Boost adaptive QoS analyzes network activity and automatically bumps gaming traffic ahead of everything else, preventing high-bandwidth tasks like downloading and streaming from introducing lag to multiplayer gaming. A new Turbo Key conveniently located on the outside of the chassis allows you to toggle various functions like Game Boost and WiFi Radar without using the web GUI or App interface.

All of our 802.11ax routers will support AiMesh, an exclusive ASUS technology that allows mixing of multiple routers to create your own mesh network, but the new AiMesh AX6100 WiFi System (RT-AX92U 2-Pack) is purpose-built for the task. It comes in a two-pack that extends coverage across the far corners of your home, eliminating the dead spots that can occur with single routers. It’s also possible to add nodes using other AiMesh-compatible routers, even if they’re based on 802.11ac.

Despite its small size, the AiMesh AX6100 WiFi System is a tri-band design capable of peak aggregate throughput up to 6100Mbps. Most of that bandwidth is in the 5GHz 802.11ax band, which offers up to 4804Mbps on its own and is also used for backhaul communication. Another 5GHz band offers 866Mbps of bandwidth for 802.11ac gear, while the 2.4GHz band serves up 400Mbps of 802.11n connectivity for legacy devices.

Meet the future with the ASUS RT-AX88U

The RT-AX88U router has much of the same underlying hardware as the Rapture applied to a more conventional dual-channel design. Both bands support 802.11ax devices, with up to 1148Mbps on 2.4GHz and up to 4804Mbps on 5GHz, for peak total bandwidth around 6000Mbps.

Wireless signals are passed over four antennas, while wired connections are handled by one Gigabit WAN port for your ISP and eight Gigabit LAN ports for local devices. With twice as many LAN ports as its peers, the RT-AX88U is ideal for environments with lots of wired clients in close proximity, like small businesses running several desktop PCs and pre-wired homes with lots of desktop or media devices.

Like its tri-band ROG counterpart, the RT-AX88U is controlled by a potent quad-core processor. It has dual USB 3.1 Gen 1 ports for shared peripherals like storage or a printer, and you can even add a 4G dongle for a backup WAN connection in case your normal internet service is disrupted.

ASUS has a long history of producing highly regarded routers, as evidenced by our seventh consecutive year earning the PCMag Readers’ Choice Award for overall customer satisfaction in the category. All of our 802.11ax models share core features that make your home network easy to configure, secure, and expand.

The ASUSWRT web interface provides fine-grained control over every aspect of your router, and it’s joined by a powerful ASUS Router App that brings extensive configuration and monitoring options to Android and iOS devices. Trend Micro provides up-to-date security via AiProtection Pro. This commercial-grade security suite offers numerous features including parental controls plus it scans both inbound and outbound traffic and automatically blocks common attacks.

Home networks often need to grow, whether it’s expanding capacity or extending coverage. AiMesh makes both easy by allowing compatible ASUS routers to work together in a mesh network that spreads WiFi over a larger area. Unlike competing mesh solutions that require all-new hardware, AiMesh is compatible with many existing ASUS routers. The AX6100 WiFi System works with AiMesh out of the box, while the Rapture GT-AX11000 and RT-AX88U will add support in a firmware update soon after launch.

We have 1013 guests and no members online