With up to 1TB of capacity, a rechargeable battery, and Wi-Fi, Ethernet, and USB 3.0 connectivity, the Voyager Air enables digital media enthusiasts to consolidate an entire collection of movies, music, or other documents for sharing on their home network or on the go. Media stored on Voyager Air may be accessed directly from a PC or Mac®, or with a free Corsair app, streamed to Android devices or Apple® iPad®, iPhone® and iPod® touch devices. Voyager Air can quickly be connected to a home network for easy access to media from network-enabled smart TVs, Blu-ray players, game consoles, DVRs, and streaming media boxes. Available in 500GB and 1TB models, Voyager Air provides enough storage to hold up to 800 full-length HD movies or 380,000 MP3 files.

Wireless Mobile Storage for Media Streaming on the Go

With Voyager Air, multiple users can enjoy their stored movies, TV shows, music and photos at the office, on a road trip, or while on vacation. Voyager Air is a self-contained streaming media server with a wireless hub built-in, so Voyager Air can wirelessly stream digital content to other playback devices directly with no Internet connection required. Voyager Air provides solid, fast, and secure 802.11n/b/g Wi-Fi connections for multiple users at ranges up to 90 feet, and can stream high definition video to up to five devices at once. The high-capacity rechargeable lithium-ion battery provides up to seven hours of video streaming between recharges.

Shared Network Storage for the Home

Voyager Air can also function as a shared home network attached storage (NAS) drive by simply plugging it into a network router via its built-in Gigabit Ethernet interface. It can then be accessed by multiple users on any networked Windows®, OS X®, or Linux® system to stream media or for file storage, media consolidation, and backup. Voyager Air comes ready to use in Windows format (NTFS) but Mac users can easily reformat to HFS+ for Time Machine® compatibility. The Voyager Air drive may be partitioned for easier organization of media and user files. 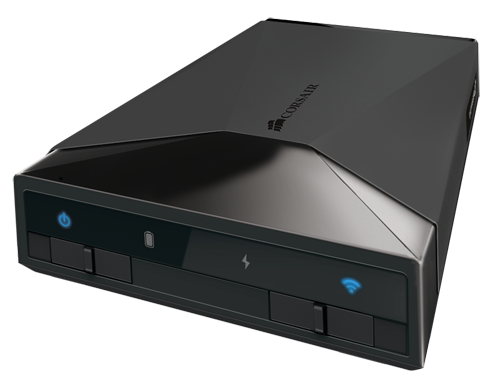 Voyager Air also functions as a super-fast USB 3.0 drive with nearly twice the performance of similar mobile USB drives, enabling users to copy a two-hour HD movie in under 30 seconds or 1000 iPhone photos in under 45 seconds. It’s compatible with USB 2.0 connections as well.

By connecting Voyager Air to a Wi-Fi hotspot and enabling wireless pass through, users can useVoyager Air as a wireless hub to share Internet access.

Voyager Air will be available beginning early February from Corsair’s worldwide network of resellers and distributors. They will be available in 500GB and 1TB capacities with each being available in glossy red and soft-touch grey. Suggested retail pricing is $179.99 for 500GB models and $219.99 for 1TB models.

A complete set of product images may be downloaded from: