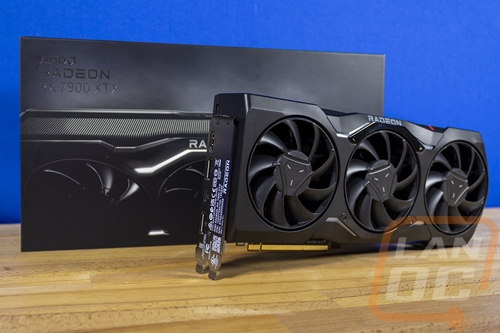 With Nvidia having launched the RTX 4090 and more recently the RTX 4080 and their pricing being out of range of a lot of users, people have been clambering for AMD's next generation of cards. AMD's latest generation was announced early in November but until today their performance has been under embargo. Today I’m going to check out what AMDs two new RDNA 3 based GPUs have going on and put both to the test as well starting with the RX 7900 XTX in this review. So let’s dive in and see what they are about and what this card is capable of and find out once and for all if AMD's new cards will be the saving grace for anyone not willing to take out a loan for a new video card.

So what sets the new Radeon RX 7900 XTX and 7900 XT apart from the 6000 series cards? Well at their core, this is a new architecture RDNA 3. AMD has taken their experience on the CPU side to bring their chiplet design into their GPU architecture. This means that the GPU uses multiple dies, not just everything on one die, and this offers a few advantages. It offers more flexibility in their product stack and more importantly, it means that they can combine different manufacturing processes. So the GCD or graphics compute die is made on the new 5nm process but the memory cache die or MCD is made on the larger 6nm process. This puts their GDDR6 interface and 2nd generation infinity cache on the more mature process and the GPU itself on the newer smaller 5nm process for better performance per watt. This design can help keep costs down as well. You can see the smaller process at work in the specs with the 7900’s having 57.7 billion transistors to the 6950 XT’s 26.8 billion transistors but with the 300 mm GCD and 220 mm² MCD vs the 520 mm² of the 6950 XT. 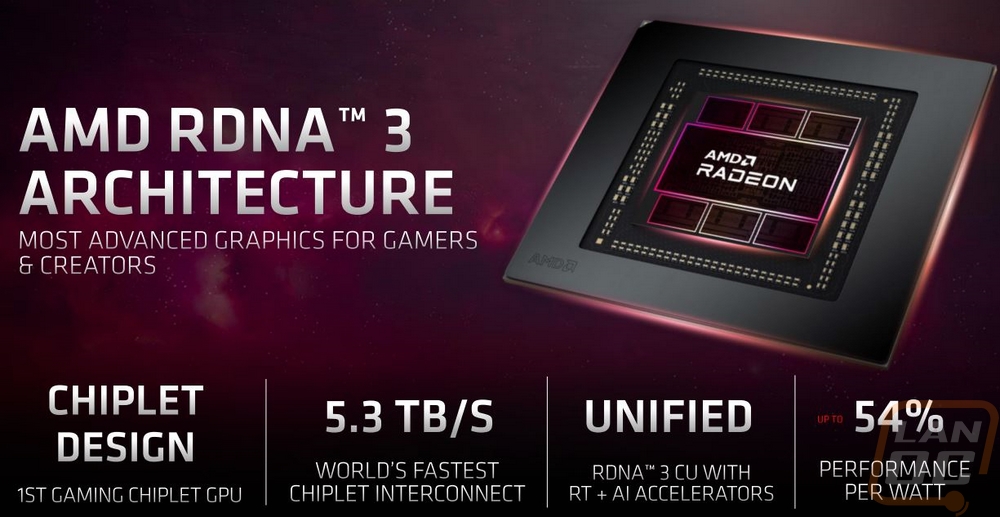 The new architecture also introduces new AL accelerator cores similar to Nvidia’s Tensor cores which the 7900 XTX has 192 AI cores and the 7900 XT has 168 AI cores. These will help with FidelityFX performance and open up more options for AMD there in the future. They have also improved the ray tracing cores with a new Gen 2 design. Those match with the compute cores 1 for 1 so the 7900 XTX has 96 of each and the 7900 XT has 84 which both are an improvement over the 9650 XT which had 80 each with the older gen 1 RT cores. As far as clock speeds, AMD has stayed in the same range as the 6950 XT before which had a game clock speed of 2100 MHz and would run up to 2310 MHz for boost clock. The 7900 XT is a little lower on the game clock at 2000 MHz but higher on the boost clock at 2400 MHz and the 7900 XTX is higher on both with the game clock at 2300 MHz and the boost up to 2500 MHz. 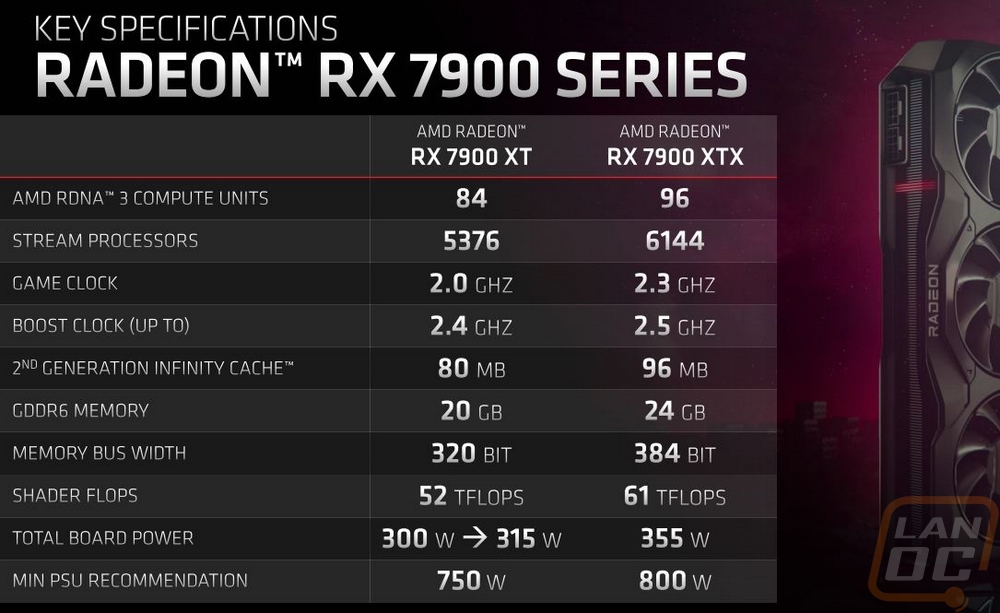 AMD took a few different stabs at Nvidia in their presentation on the new cards. They put together a direct comparison showing how both cards are significantly smaller than the RTX 4080 which will help a lot when it comes to fitment. They also point out that their cards aren’t using the new 12VHPWR plug which has caused some people issues. 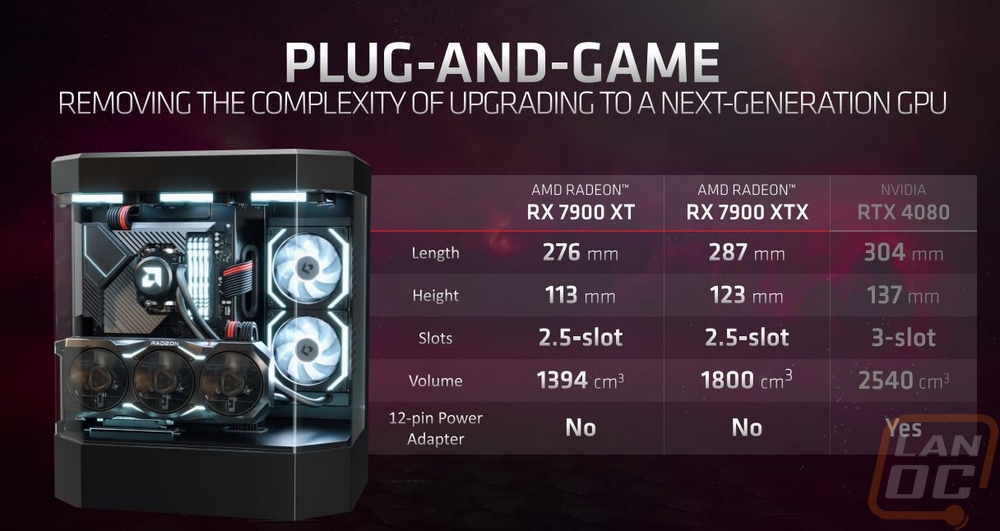 Another jab at Nvidia comes with their inclusion of what they call AMD Radiance Display Engine which is what brings the support for DisplayPort 2.1 connections on the cards. This opens up long-term support for much higher refresh rates. At 1440p for example the connection is capable of 900 Hz where 480 Hz is the limit for DP 1.4. This bandwidth becomes more important at higher resolutions like 4k which is capped at 240 Hz with DP 1.4 but can do 480 Hz with DP 2.1. Then at 8K DP 1.4 is limited to 60 Hz but DP 2.1 can do 165 Hz. 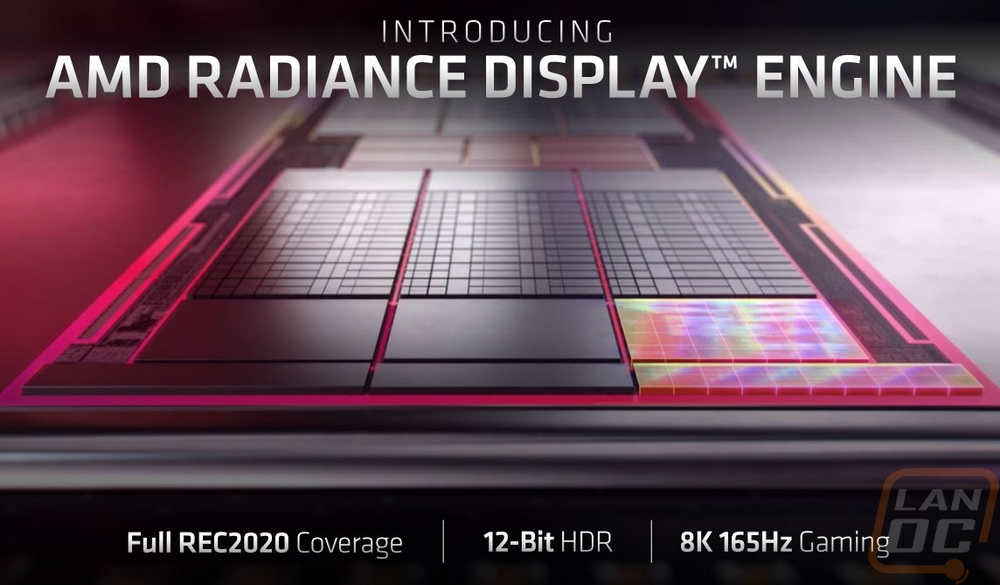 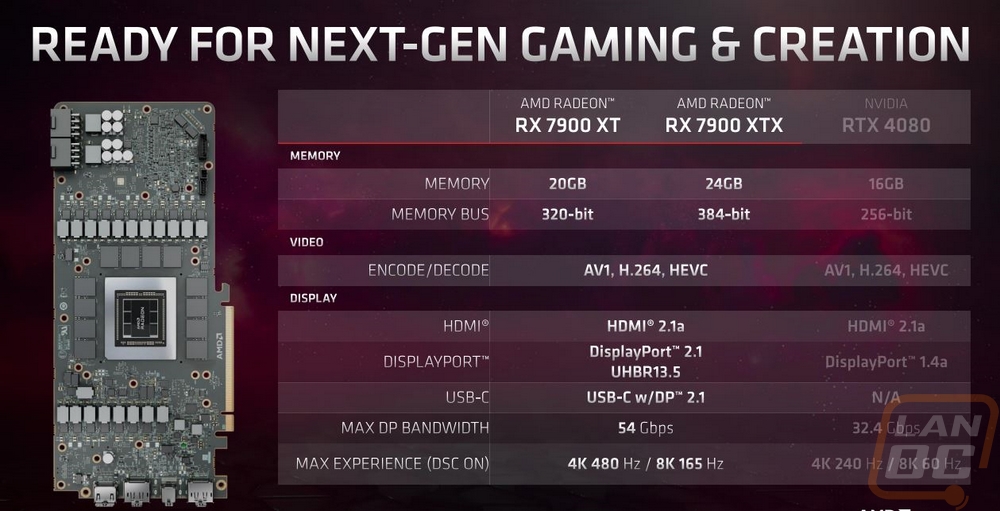 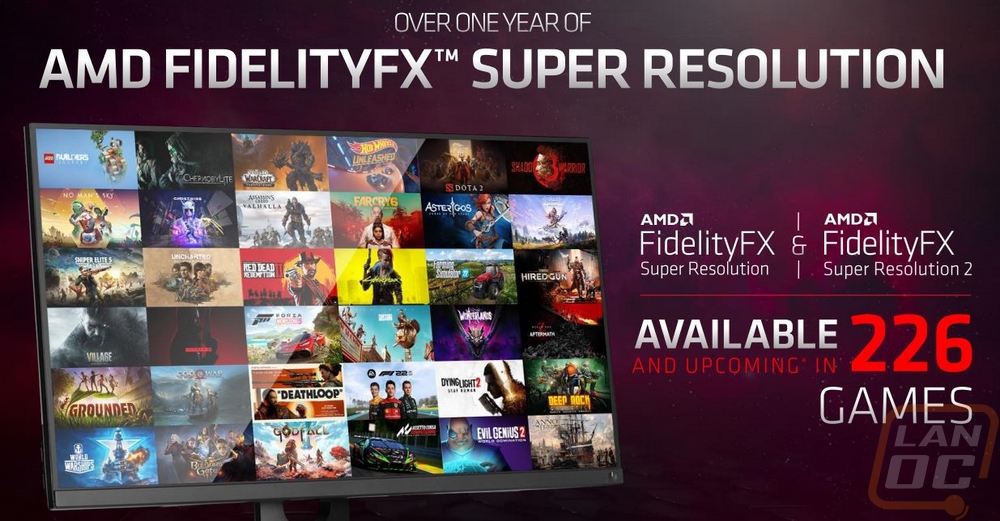 The new cards also have AV1 support which is going to be an important feature when consuming video content online and especially for streamers as it can open up higher-quality video streaming at lower bandwidth. AMD has included support for two simultaneous encode or decode streams similar to what the 4090 and 4080 can do. 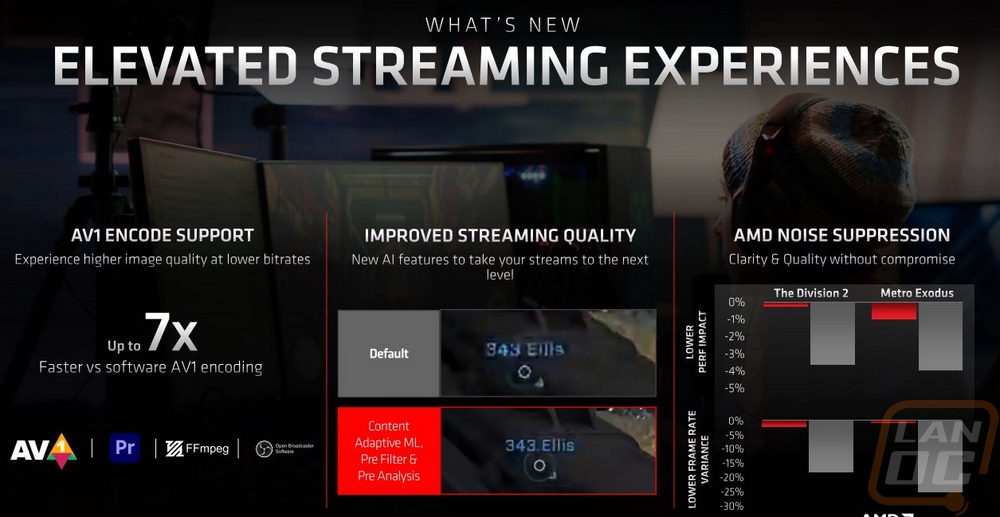 The other big feature is of course AMDs pricing. They have the base suggested price for the 7900 XT at $899 and the 7900 XTX at $999 which is an improvement over the RTX 4080’s Founders Edition price of $1199. Once I get into testing we will have to see how they compare performance-wise, but AMD has themselves positioned well here. 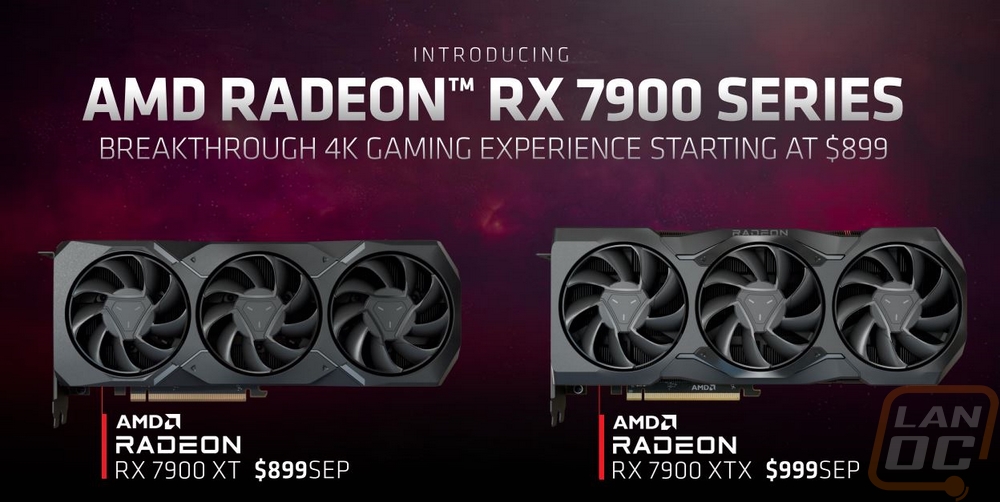 Before getting into testing I did also run GPUz which I normally do to double-check clock speeds but as of writing this GPUz hasn’t added support for the new GPUs yet and the clock speed readings are all over the place. The BIOS revision also isn’t shown but we can at least document that I am testing with the prerelease press driver which is Adrenalin 22.40.00.57. 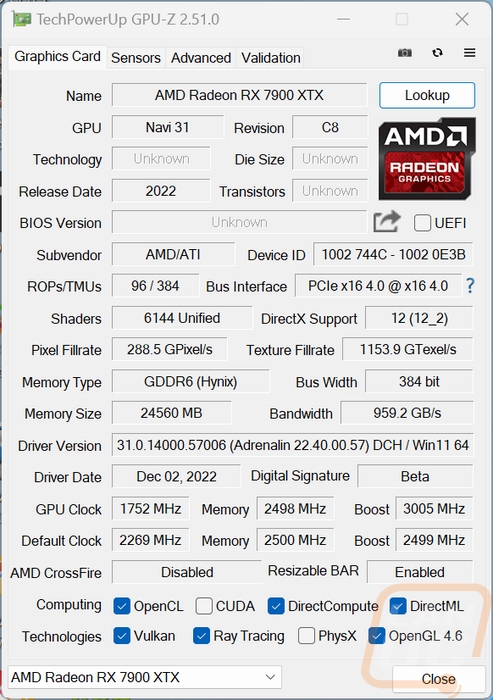 We have 1444 guests and no members online