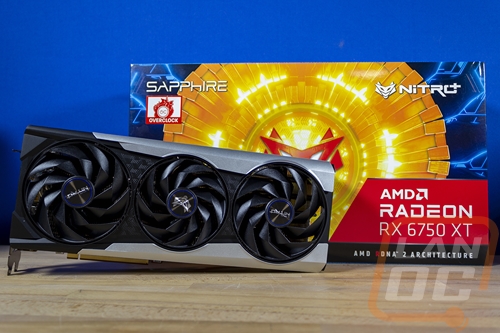 For my last few tests, rather than focusing on in game performance, I like to check out other aspects of video card performance. These are also the most important ways to differentiate the performance between cards that have the same GPU. To start things off I took a look at power usage. For this, I use our Kill-A-Watt hooked up to the test bench to record the total wattage of the system. I ran two tests with the first using 3DMark Time Spy to put the system under a load similar to normal in game performance. Here our test system with the Nitro+ RX 6750 XT pulled 449 watts which was 39 watts over the 6700 XT, for comparison the 3070 is 62 watts below that and the 3060 Ti was 84. At the same time with Time Spy I also use GPUz to check out the onboard reading for GPU power draw at the chip. The Nitro+ RX 6750 XT pulled 230 watts which was exactly what Sapphire's documentation had for the overclocked card, the Nitro+ 6700 XT was at 212 so the gap between the two cards isn’t that far here. Lastly, I run AIDA64’s stress test on the video card to load up only the GPU, and using the Kill-A-Watt our test bench with the Nitro+ RX 6750 XT pulled 367 watts matching the 5700 XT. 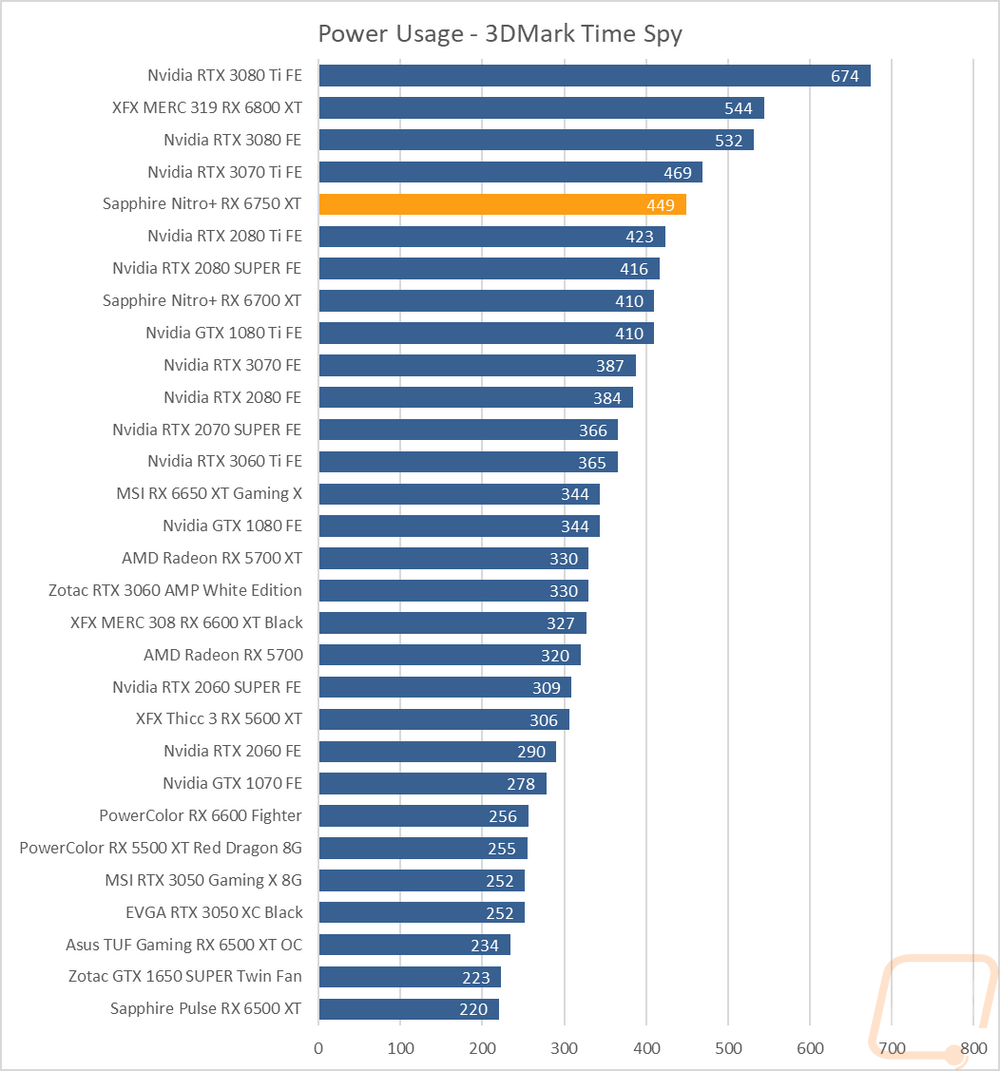 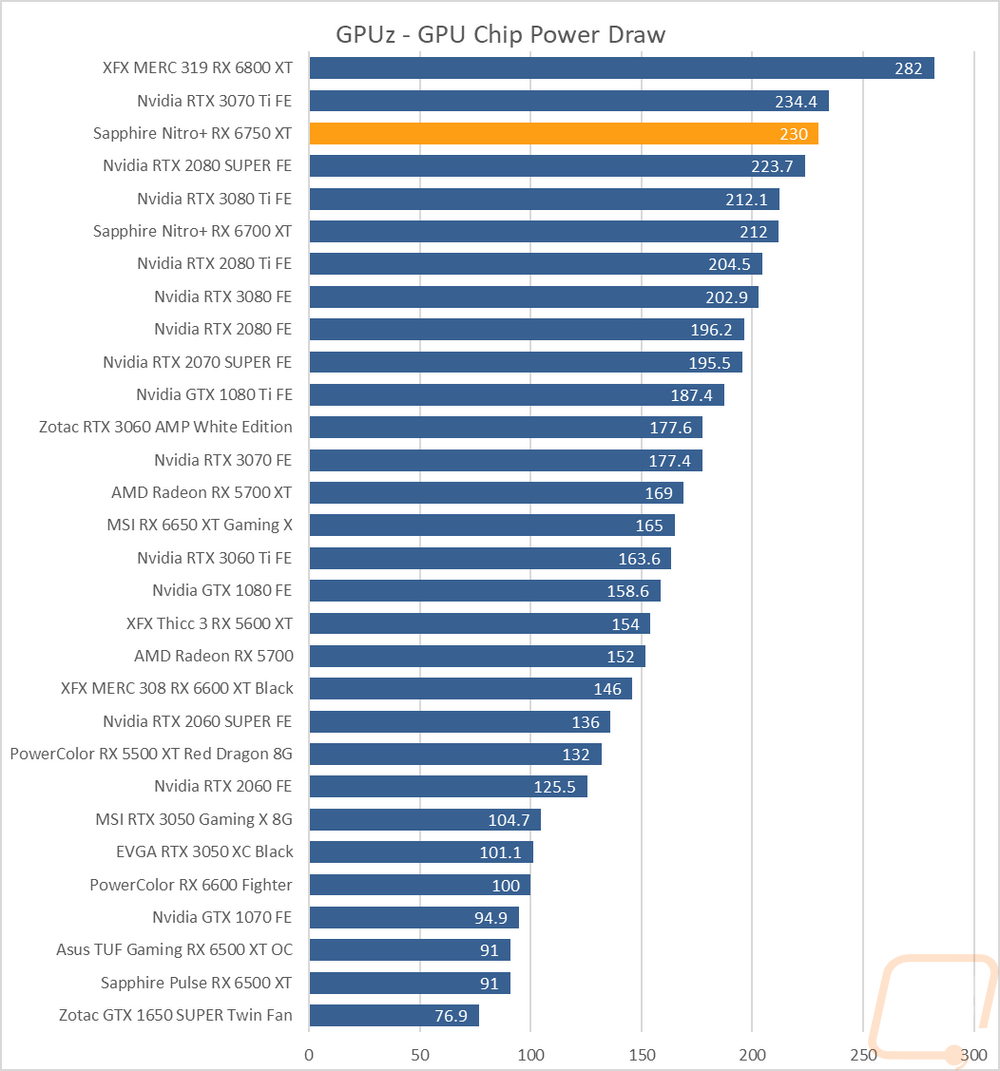 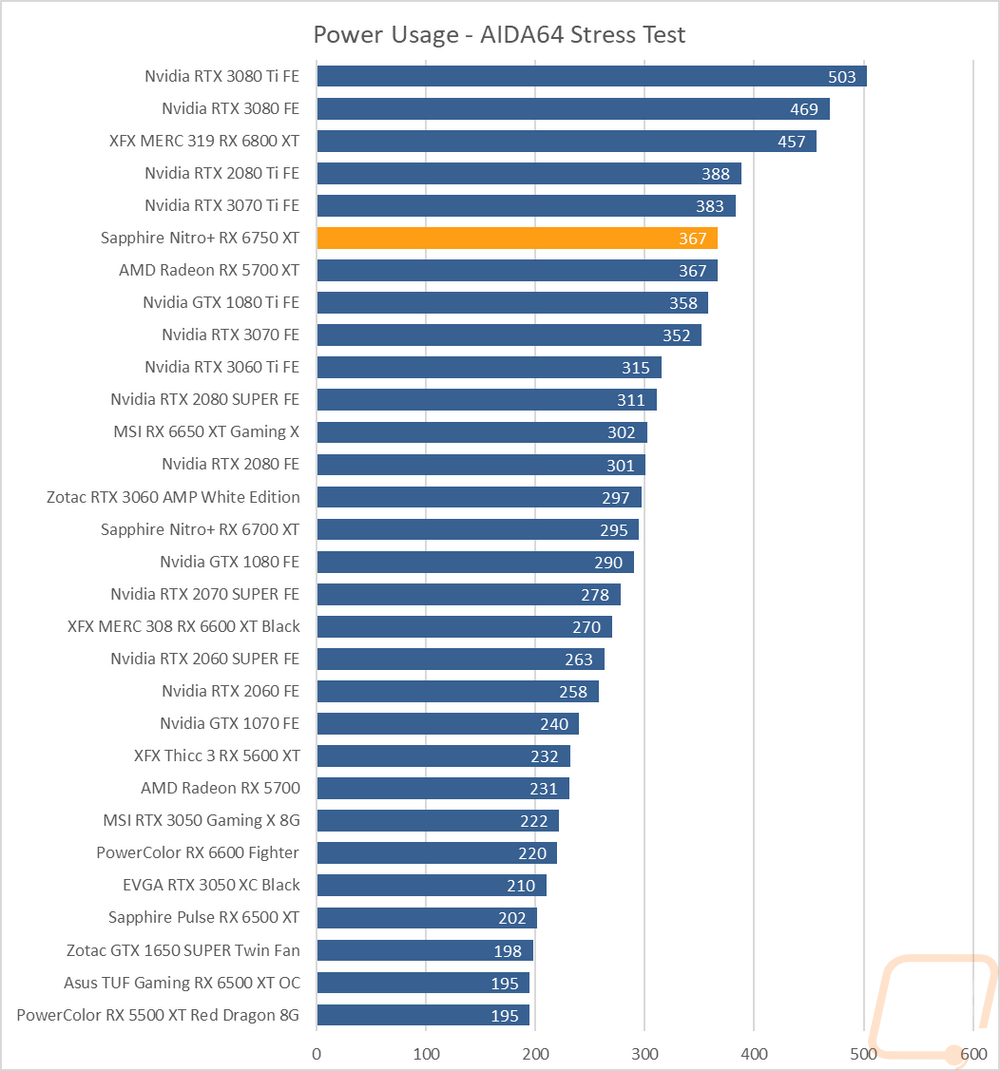 My next round of tests were looking at noise levels. These are especially important to me because I can’t stand to listen to my PC whirling. Especially when I’m not in game and other applications are using the GPU. For my testing, though I first tested with the fan cranked up to 100% to get an idea of how loud it can get, then again at 50% to get an idea of its range. I test using both A and C weighting, A is the standard way and C has a little more of the low end to check for low-level hums. The Nitro+ RX 6750 XT did well at 100% fan speed, even with it having three fans. This was just hair over the Nitro+ 6700 XT on the A-weighted but was lower on the C weighted with the new fan design being the difference between the two. At 50% fan speed, it was farther up in the charts for the A-weighted but did well on C-weighted again. I also take a look at noise performance while under load. For that when running AIDA64’s stress test I wait until the temperature of the card has leveled off and then measure how loud things are when the card is at its worst-case scenario with the stock fan profile. Here the Nitro+ RX 6750 XT did especially well and frankly, this is the only noise that you should worry about. 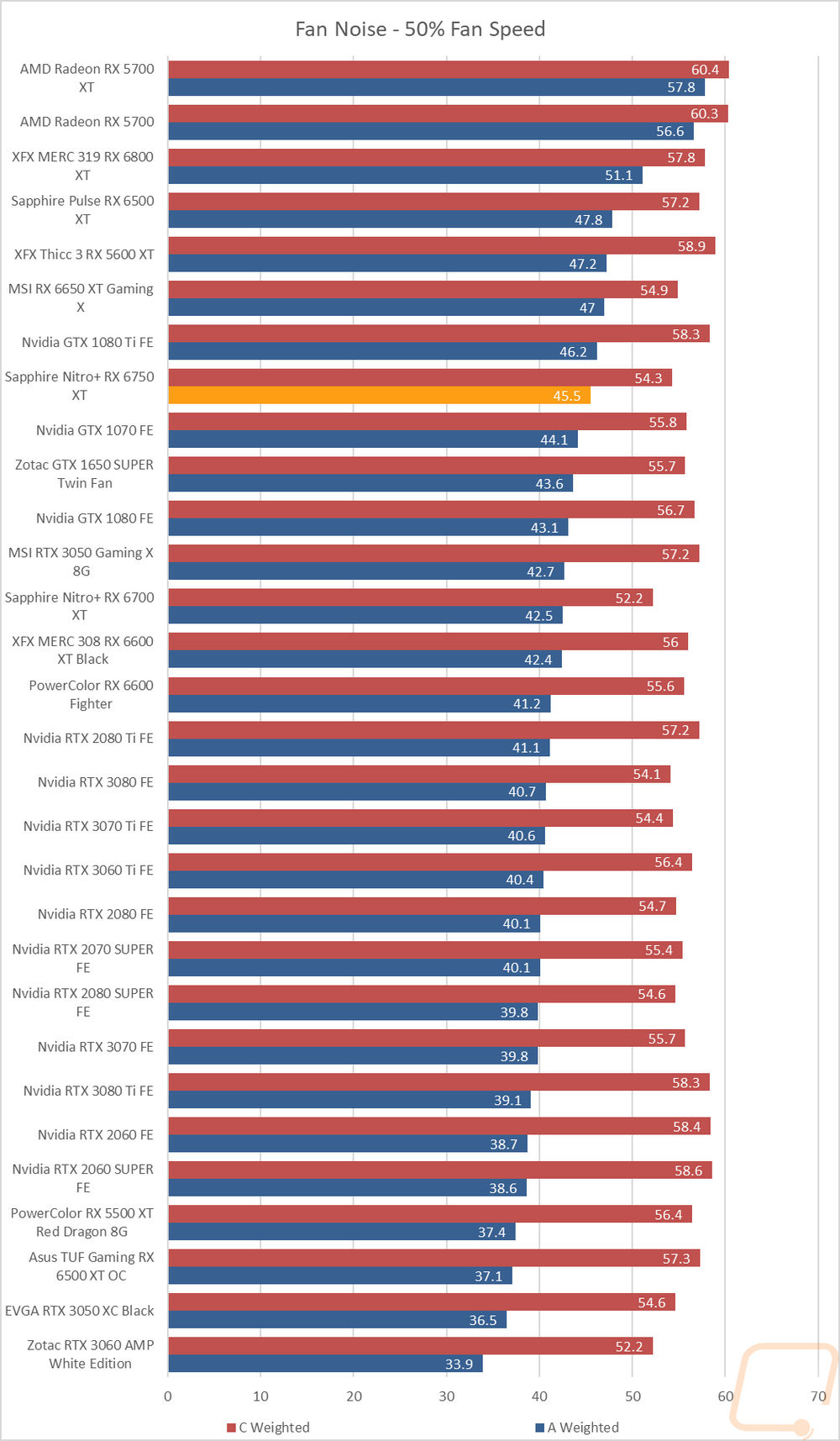 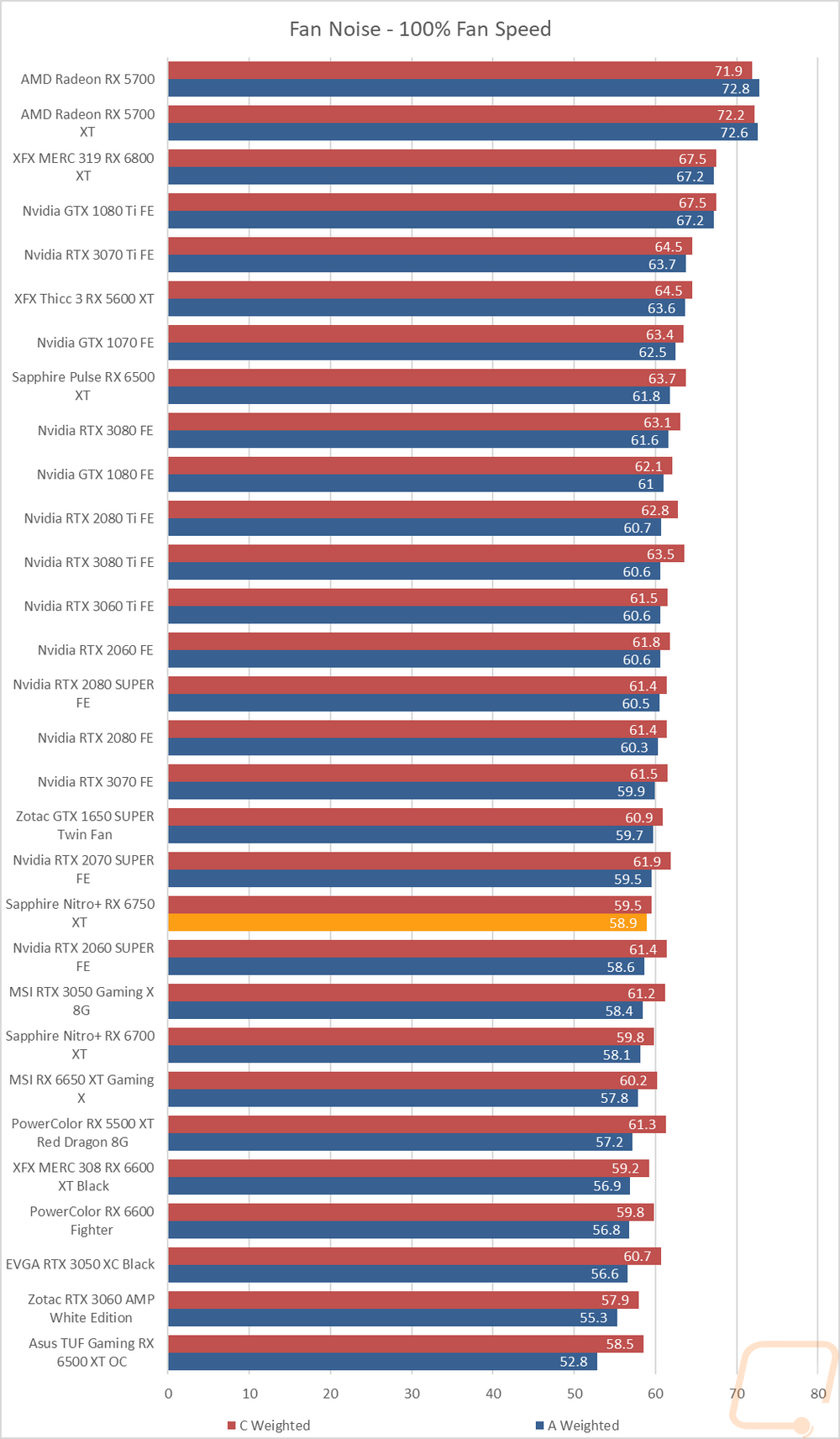 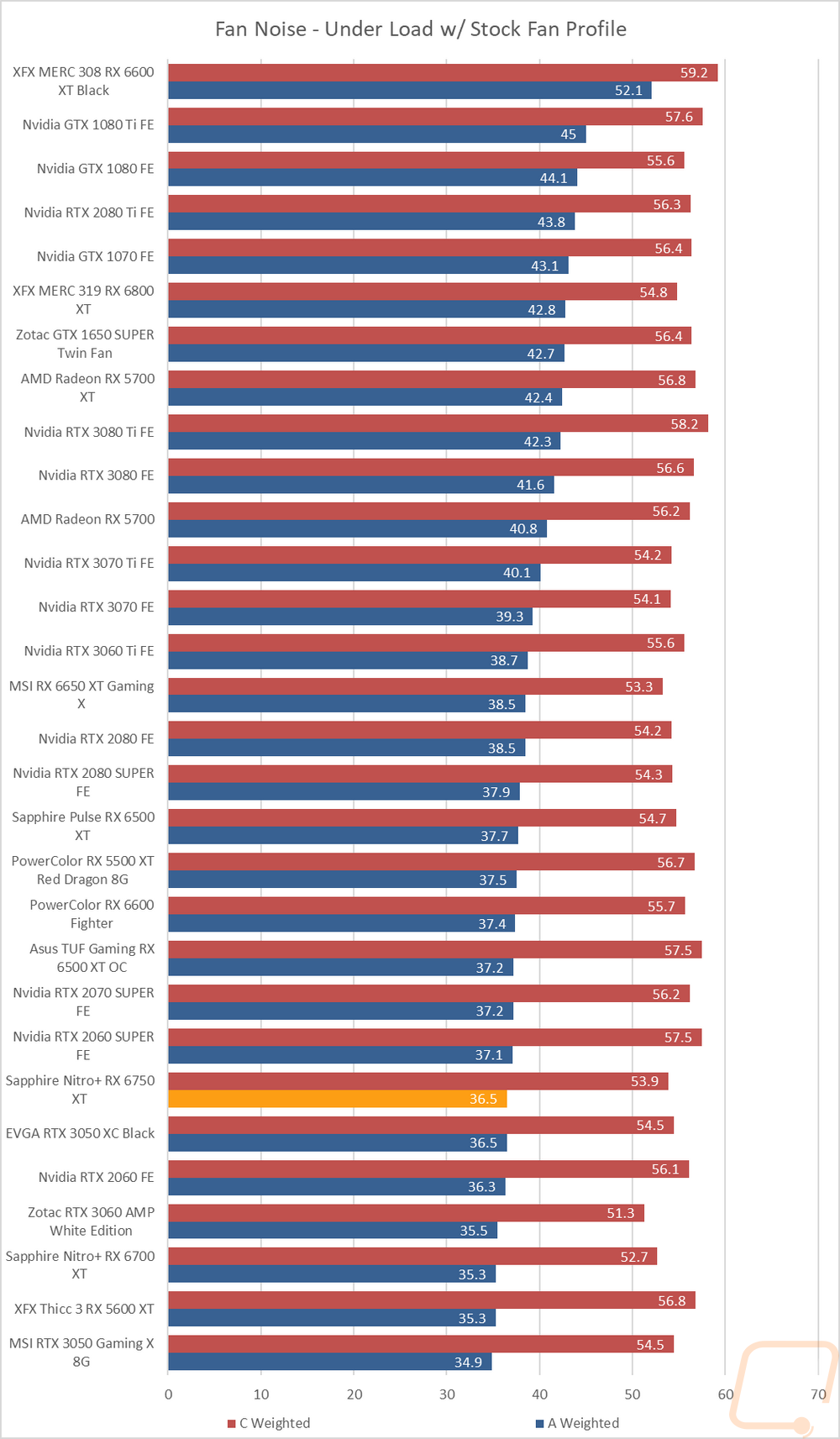 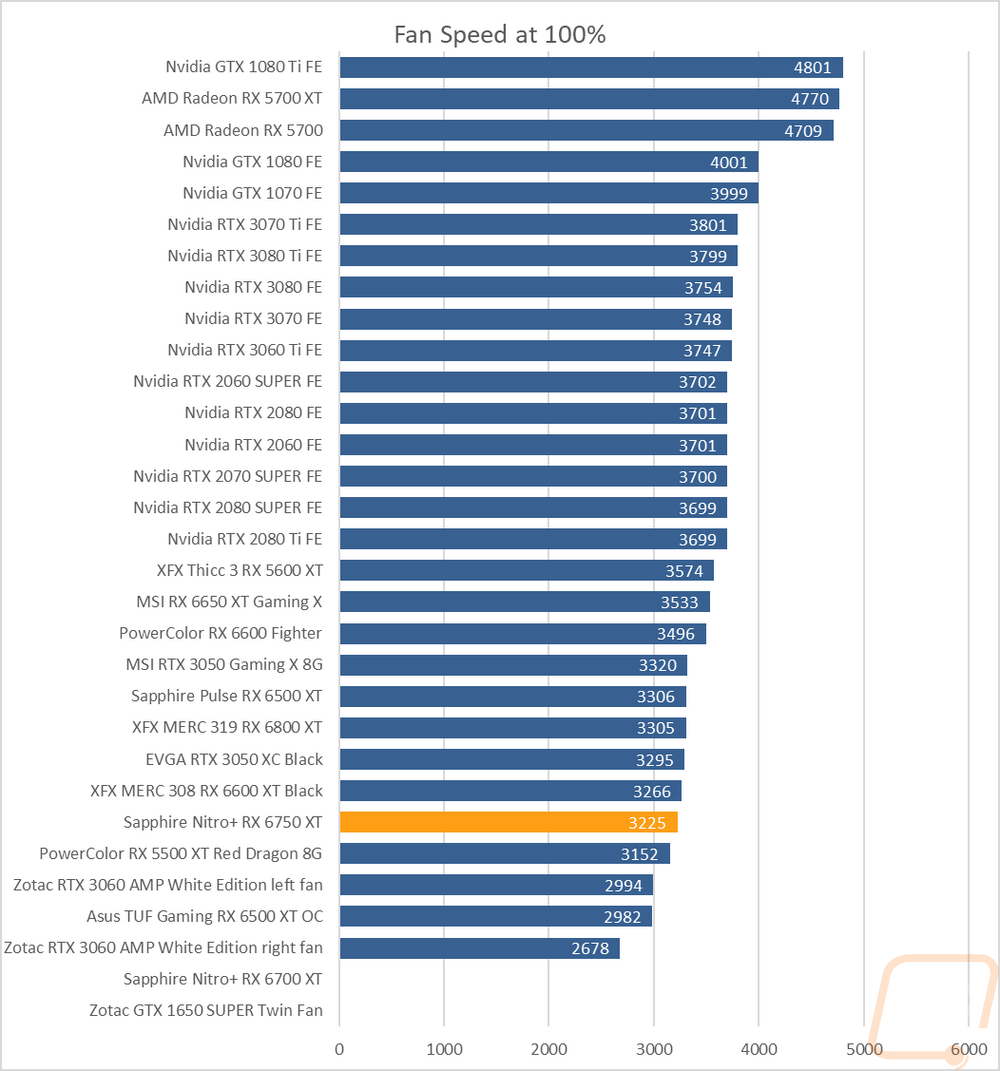 To finish up my testing I of course had to check out the cooling performance. To do this I ran two different tests. I used AIDA64’s Stress Test run for a half-hour each to warm things up. Then I documented what temperature the GPU leveled out at with the stock fan profile and then again with the fans cranked up to 100%. With the stock profile, the Nitro+ RX 6750 XT leveled off at 58 degrees which was 4 degrees below the Nitro+ RX 6700 XT. Then with the fans cranked up, the Nitro+ RX 6750 XT managed to drop things more down to 44c which was one degree above the Nitro+ RX 6700 XT for a delta between the two of 14 which is right where it should be. Not too much left on the table but also some headroom if needed. Given the huge cooler, the performance isn’t a big surprise. 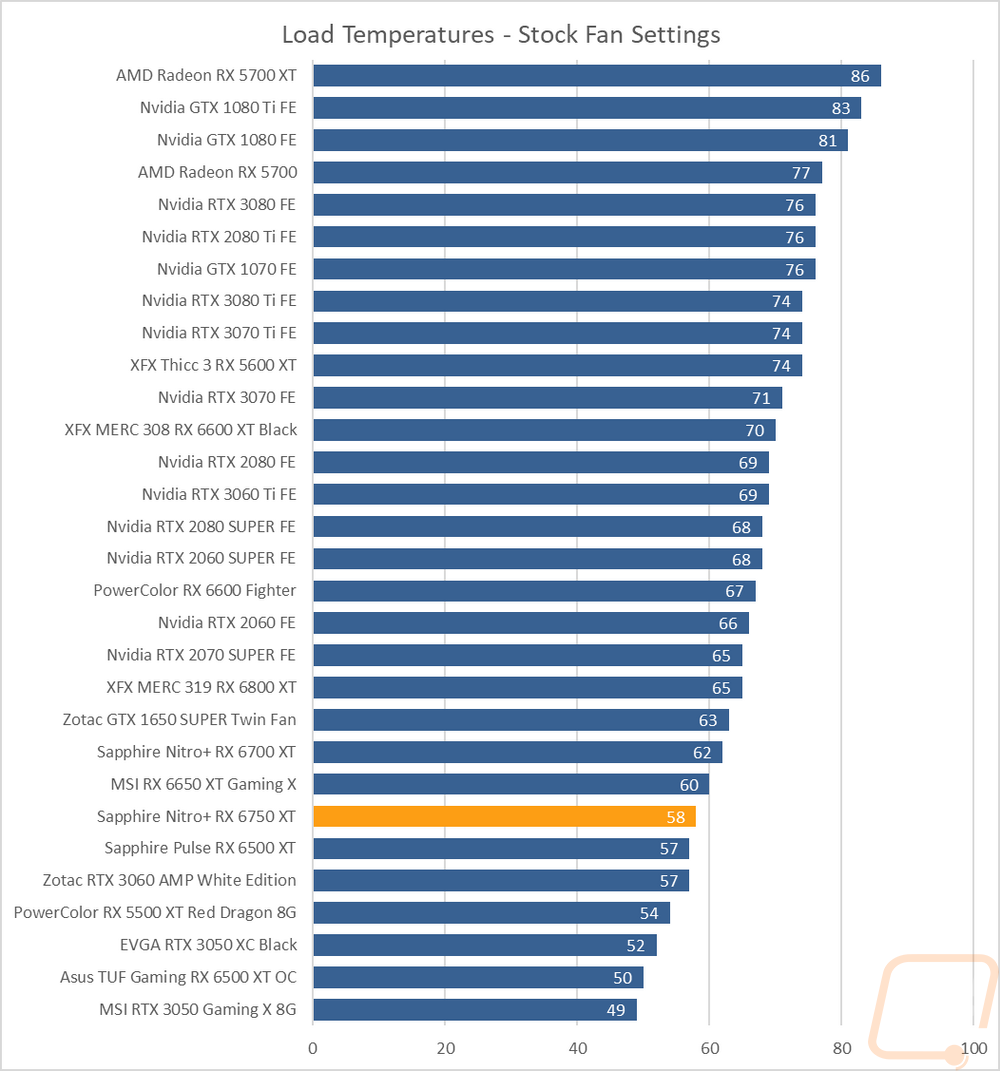 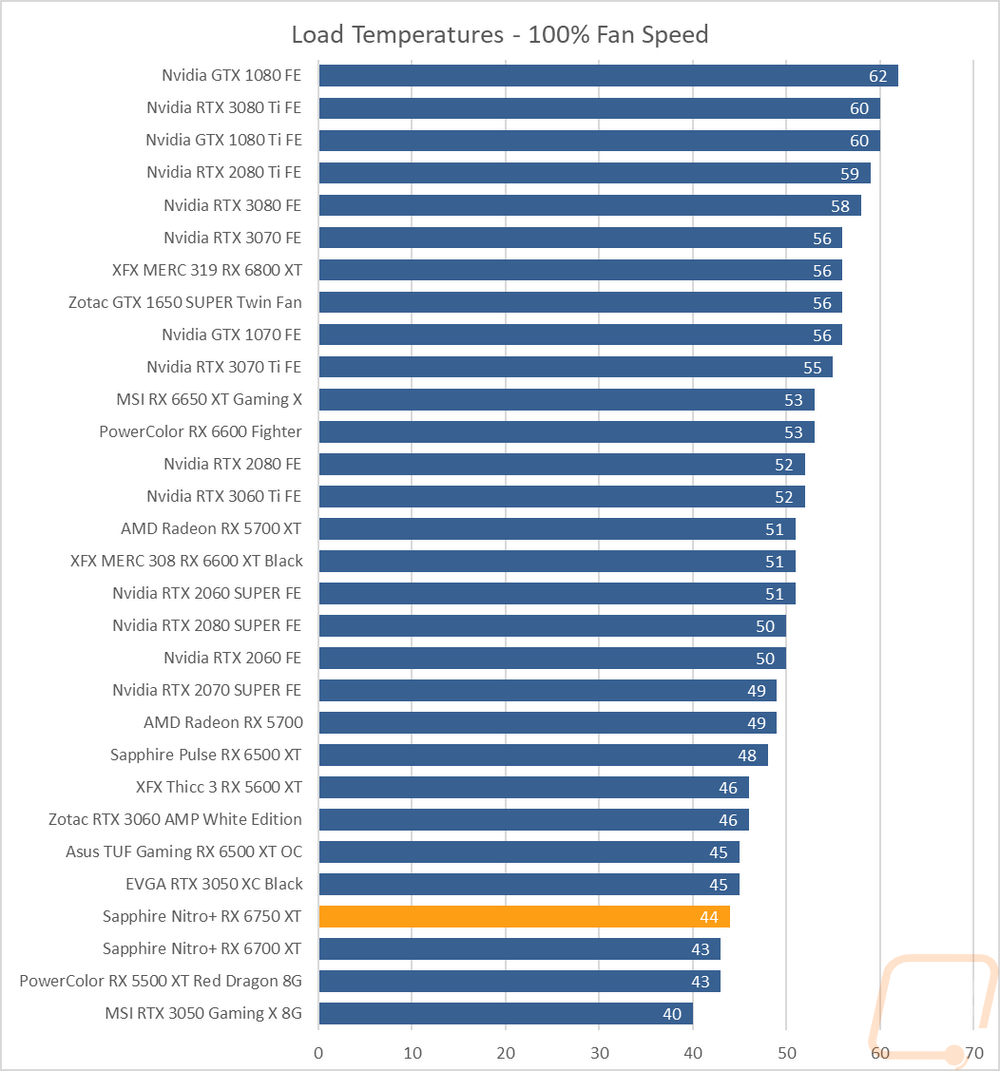 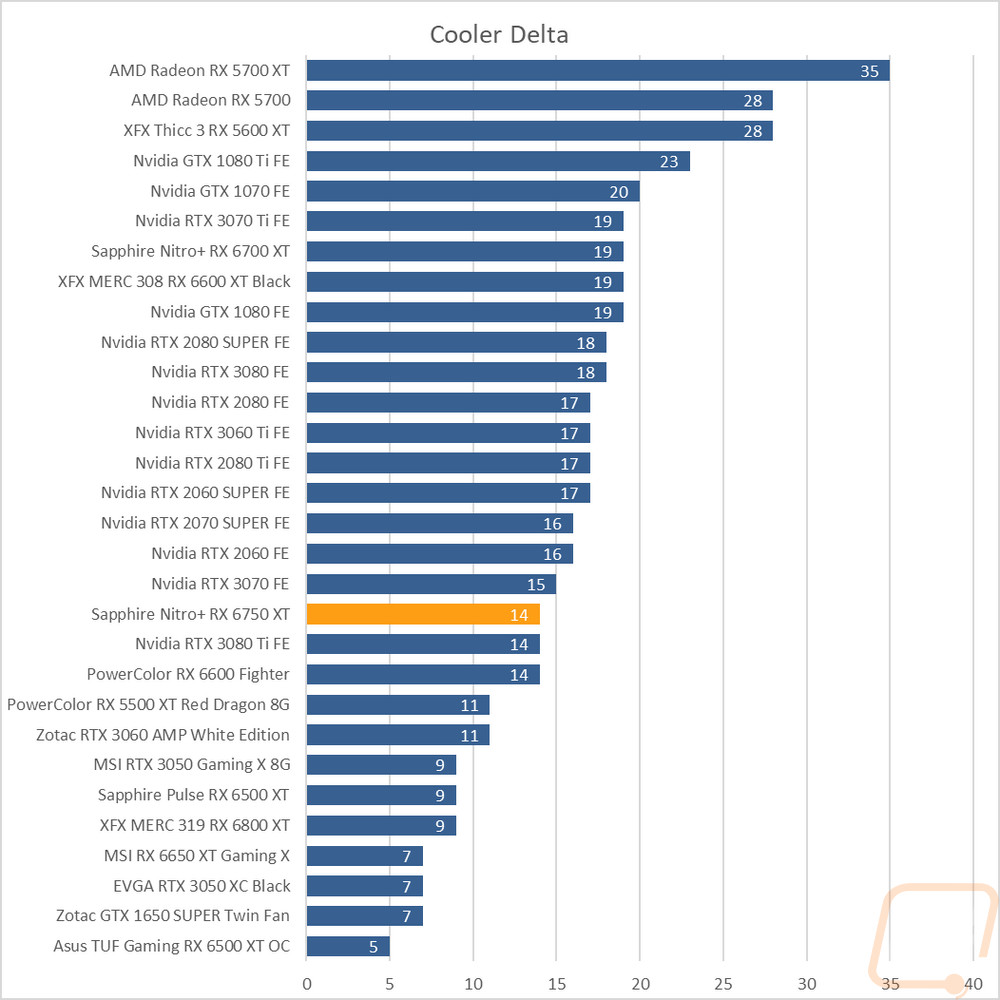 While running the stock fan profile testing I also took the time to get a few thermal images so we could see what is going on. On the fan side of the Nitro+ RX 6750 XT, most of the card is running extremely cool. There is a bit of a heat pocket coming from under the card which given that it blows air out the top and out of the bottom it isn’t a big surprise. Up on the top edge, the hottest area is on the far left where the fan shroud covers up some of the heatsink. For the back of the Nitro+ RX 6750 XT, the exposed PCB behind the GPU is of course the hottest area but it does look like the metal backplate is at least pulling some heat, unlike the plastic backplates that some cards have which are an insulator. 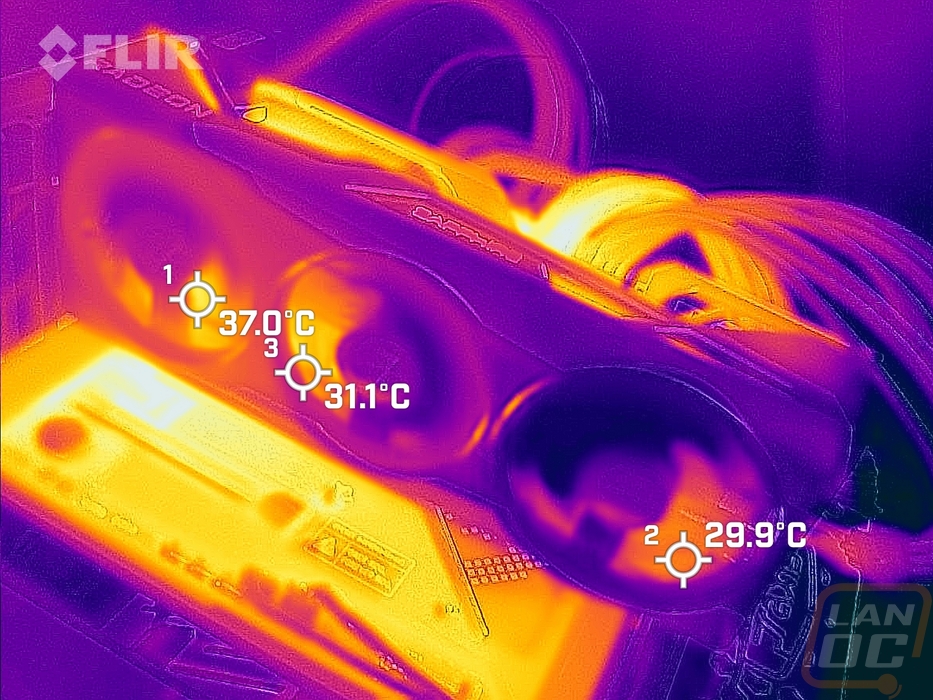 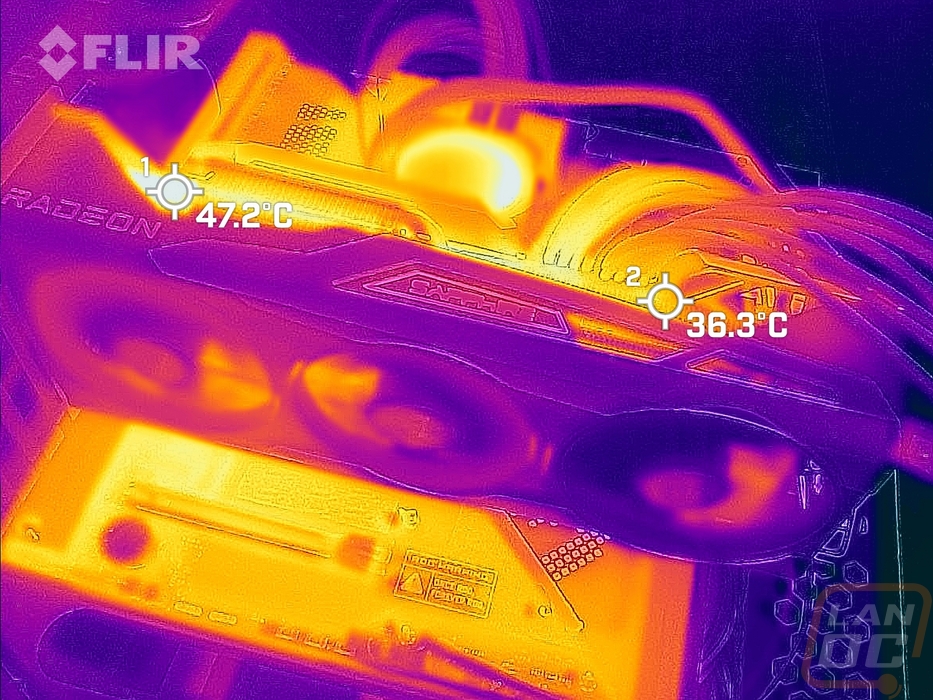 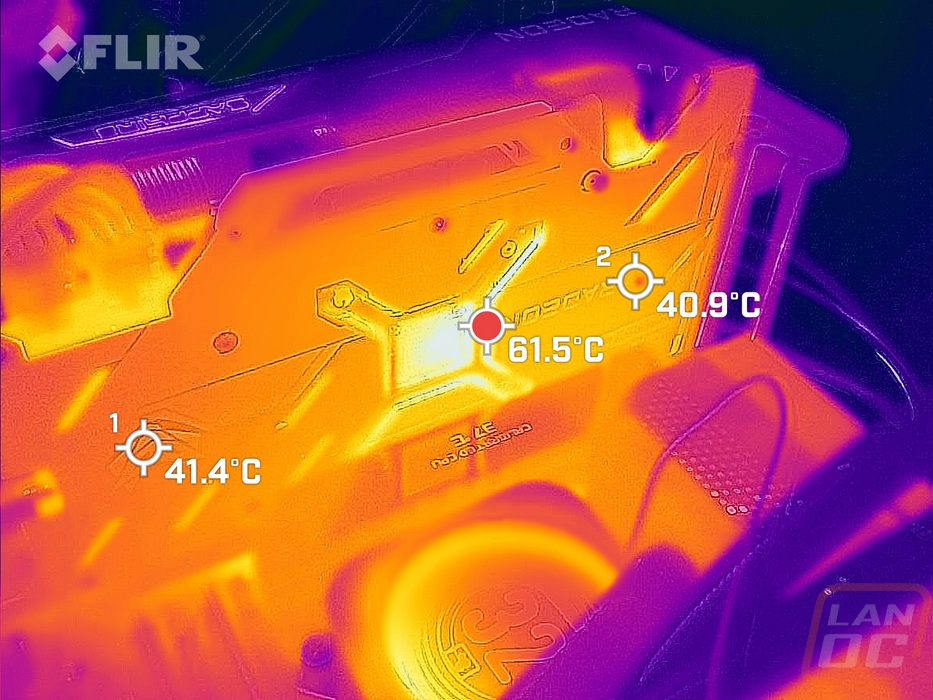