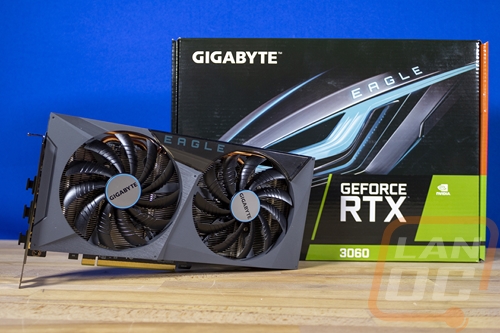 Going into this review I was excited to check out the RTX 3060 Eagle 12G because I haven’t had Gigabyte’s Eagle line in the office before. They launched it early last year and as you can imagine things have been tight from them on. Their Eagle lineup is Gigabyte’s budget-focused model but it does come in two different SKUs as far as the RTX 3060 is concerned. They have a referenced clocked 1777 MHz model which is what I am checking out today and then they have a similar model with an overclock which has a small overclock of 1807 MHz. While budget-focused Gigabyte didn’t do a bad job on the overall styling of the RTX 3060 Eagle. I am digging the grey color that they went with for the entire fan shroud and backplate. Black, grey, and silver are used often in video cards but this is a lighter shade than the grey you normally see and it looks good. They do still include Eagle branding and the bright blue or aqua color that they use with the Eagle line is also unique and good looking. They did also slip in a little bit of RGB lighting though I think the card could use a little more if you are going for it. But I was happy that they avoided using it to just light up branding which is what so many cards have.

The plastic fan shroud wraps around to the back of the card which does give it a backplate officially. But being plastic it doesn’t offer any extra strength and as far as cooling goes it is more of an insulator as well. But it does look better than not having a backplate and it offers at least impact and small spill damage. As for performance, the RTX 3060 Eagle competed right with the previous RTX 3060’s that I have tested. This put it with the RTX 2060 SUPER a majority of the time and that translated to great 1080p performance and enough power at 1440p to push things though you may have to turn the settings down on some titles.

The biggest faults with the 3060 Eagle all come down to just one area. They went with a horizontal heatsink fin layout along with capping the overall RPM of the dual fans a lot lower than most cards. When testing the fans at 100% and 50% fan speeds they were very quiet, but when under load the card is noisier than the other RTX 3060’s. This is because even with the stock fan profile the cooler pushes the fans to keep things cool leaving very little headroom. It's harder to push the air side to side the longer distance compared to a vertical layout so even being a larger card than the EVGA the Eagle doesn’t cool as well. Now it is perfectly fine for cooling, I just wouldn’t expect to be able to get a big overclock out of the card as it sits.

The other big issue and frankly the elephant in the room is the overall availability and pricing of this and ALL GPUs right now. This isn’t on Gigabyte at all, in fact, the RTX 3060 Eagle has an MSRP of $329.99 which is right at Nvidia’s announced price and much lower than any of the overclocked cards. But due to more than a year of shortages and high demand from mining as well as with people working from home and gaming more often cards like this are selling for ludicrous numbers if you can even find one. I hate to post up reviews when they are so tight, but if you are shopping around I do want people to know what to expect from the card and in this case, you can expect so-so cooling, unique and good looking styling, solid performance, and budget focused materials on things like the plastic backplate which would normally go perfectly with its budget-focused MSRP. 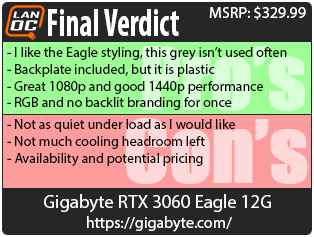 You might call him obsessed or just a hardcore geek. Wes's obsession with gaming hardware and gadgets isn't anything new, he could be found taking things apart even as a child. When not poking around in PC's he can be found playing League of Legends, Awesomenauts, or Civilization 5 or watching a wide variety of TV shows and Movies. A car guy at heart, the same things that draw him into tweaking cars apply when building good looking fast computers. If you are interested in writing for Wes here at LanOC you can reach out to him directly using our contact form.
Discuss this article
Log in to comment
Posts in discussion: Gigabyte RTX 3060 Eagle 12G