For my last few tests, rather than focusing on in game performance, I like to check out other aspects of performance. These are also the most important ways to differentiate the performance between cards that have the same GPU. To start things off I took a look at power usage. For this, I use our Kill-A-Watt hooked up to the test bench to record the total wattage of the system. I ran two tests with the first using 3DMark Fire Strike to put the system under a load similar to normal in game performance. Here the XC3 Black pulled 402 watts. This is a big jump over the 375 that the 3070 Founders Edition pulled in the same test. I then tested again using AIDA64’s Stress Test this time which would only load the GPU not the CPU as well. Here the XC3 Black pulled 358 watts. This is 24 watts over the Founders Edition. Now, this additional power draw does finally clue us into why the EVGA RTX 3070 XC3 Black is able to outperform the Founders Edition across the board while still having the same boost clock speed. More power does allow for the clocks to stay closer to the boost clock when under load. 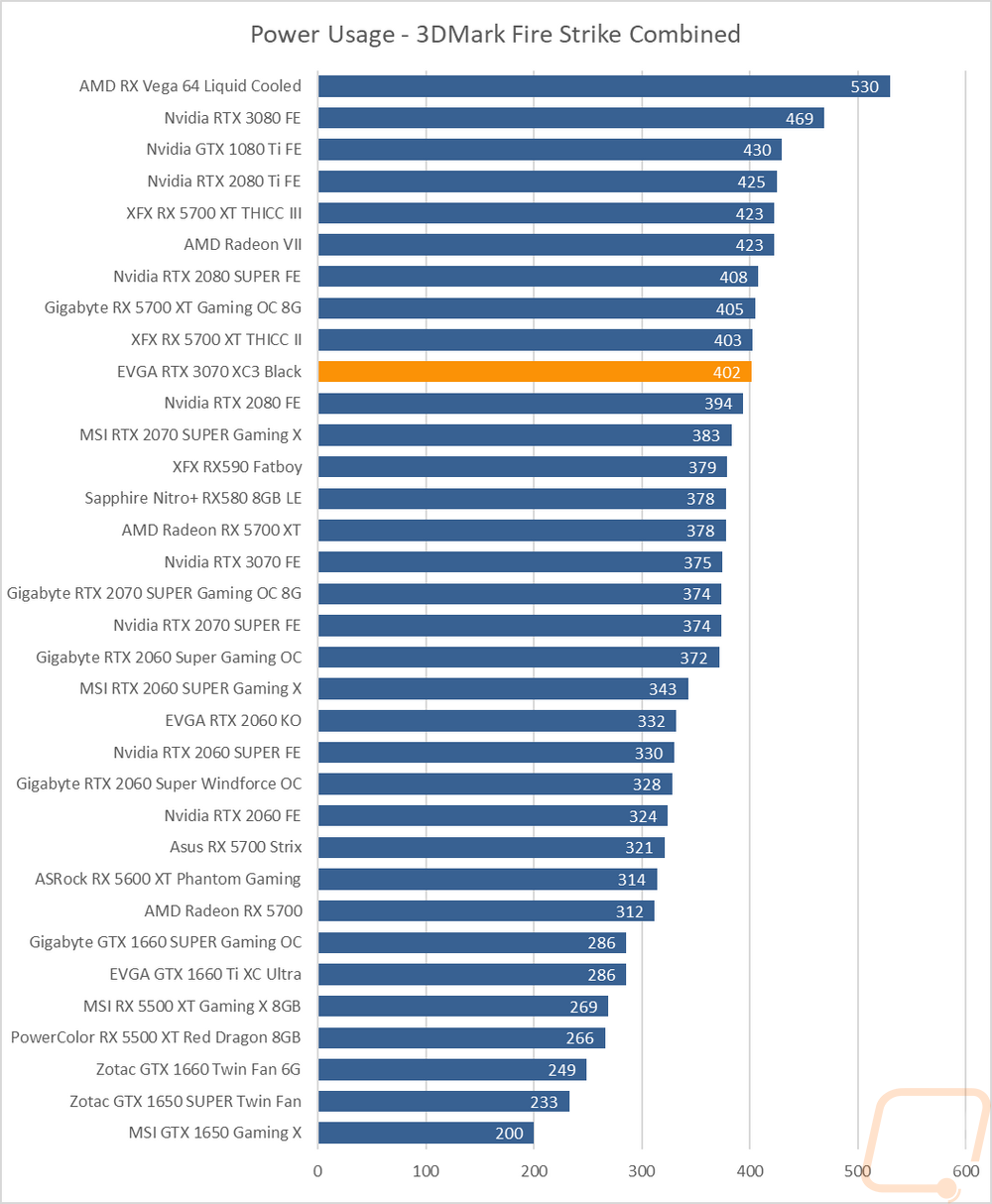 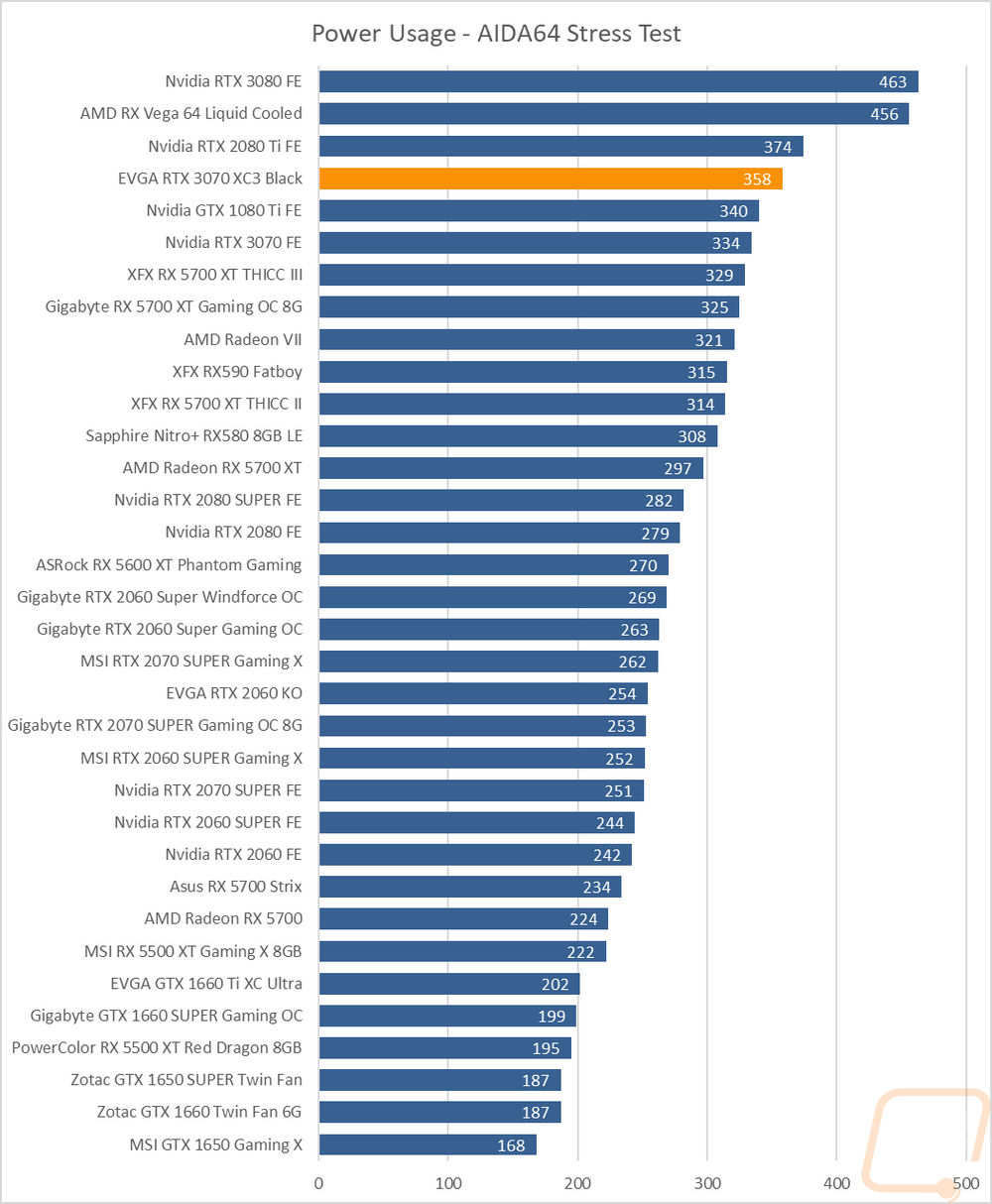 My next round of tests were looking at noise levels. These are especially important to me because I can’t stand to listen to my PC whirling. Especially when I’m not in game and other applications are using the GPU. EVGA does turn the fans off on low power usage, in fact, they don’t turn on until the GPU reached 55C. For my testing, though I first tested with the fan cranked up to 100% to get an idea of how loud it can get, then again at 50% to get an idea of its range. The XC3 Black wasn’t exactly quiet with its three large fans cranked, it came in at 61.8 decibels. The Founders Edition was significantly quieter here. The 50% fan speeds were much better however at 38.7 decibels. I then tested the fan noise under load. For this, I used AIDA64’s Stress Test for a half hour to warm things up and with the stock fan profile, I tested the noise level which wasn’t bad at 36.3 decibels. This was in the bottom half of our charts and was 2.6 decibels lower than the Founders Edition. I did also track the 100% fan speed when I had them cranked up and with all three fans running at 3745 RPM it is no wonder why they were so loud. 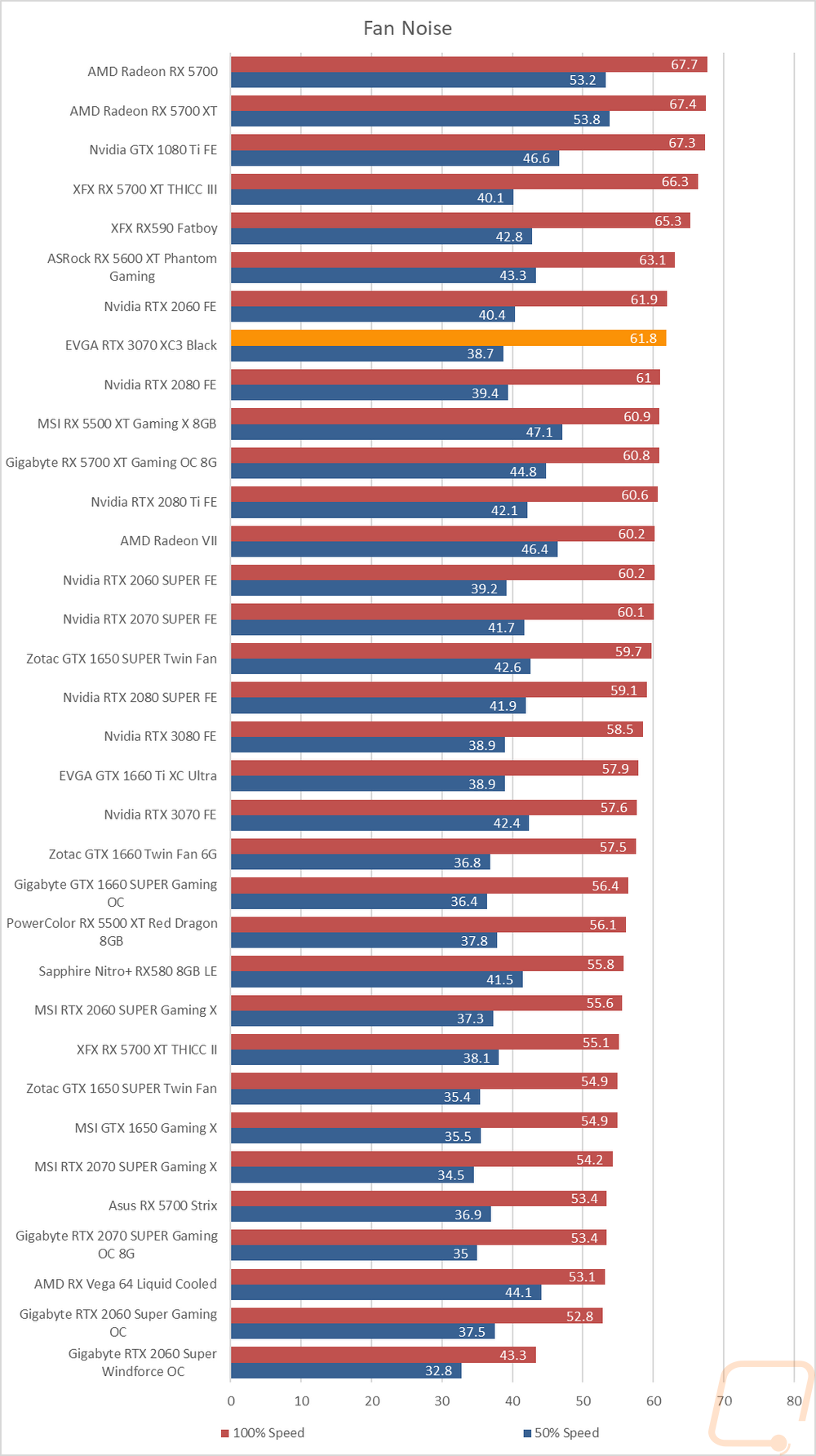 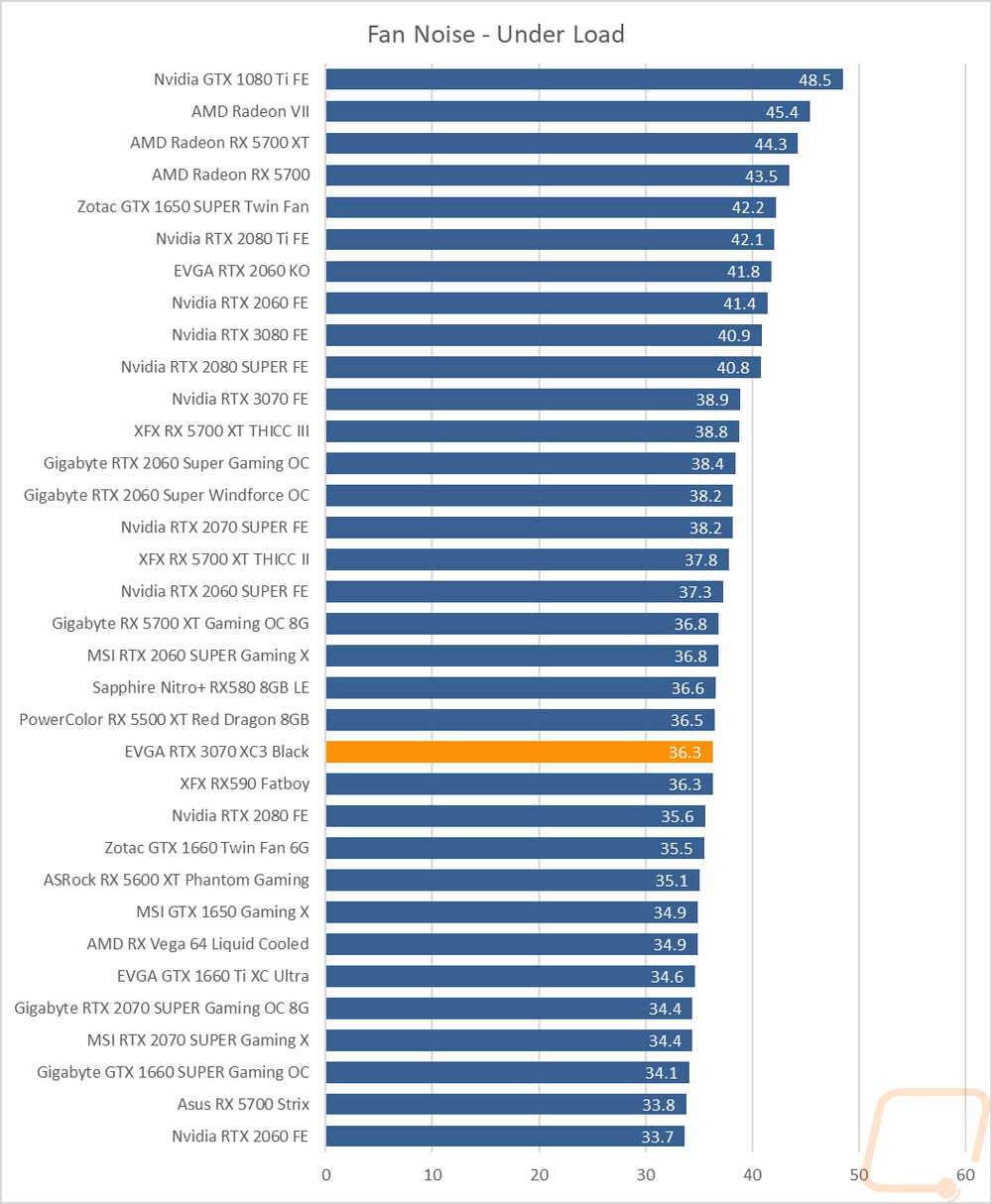 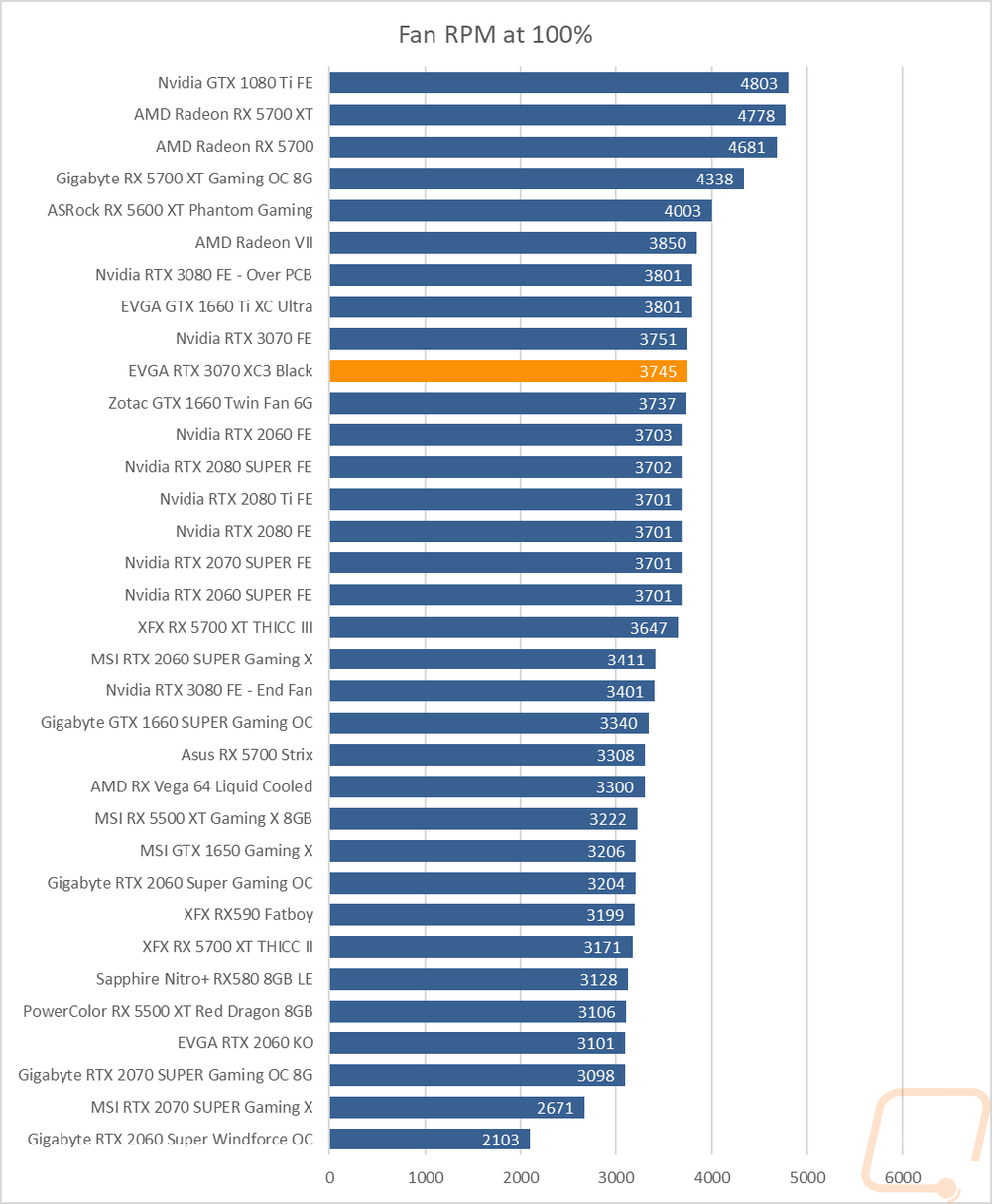 To finish up my tested I of course had to check out the cooling performance. To do this I ran two different tests. I used AIDA64’s Stress Test run for a half-hour each to warm things up. Then I documented what temperature the GPU leveled out at with the stock fan profile and then again with the fans cranked up to 100%. With the stock profile, the EVGA XC3 Black came in at 67 degrees which was 4 degrees lower than the 3070 Founders Edition. Cranking the fans up that dropped down the 51 degree’s which interestingly kept the XC3 Black right in the same spot in our charts and was 3 degrees lower than the Founders Edition. The delta between the stock and 100% results shows how much room is left in the cooler. I went ahead and included that as well which is 16 degrees. I wouldn’t run the triple fan setup at 100%, it was just too loud. But you could turn things up if overclocking. 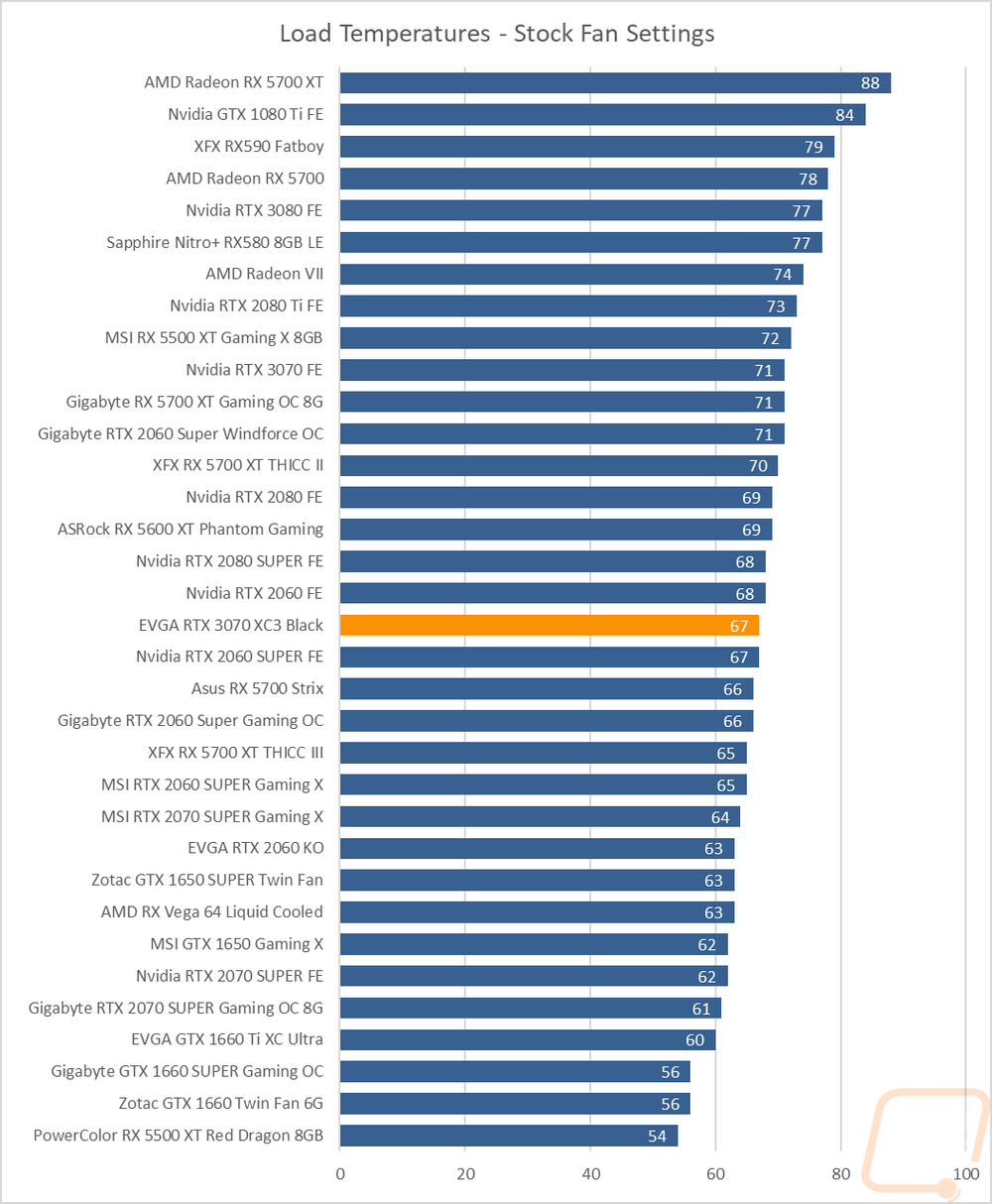 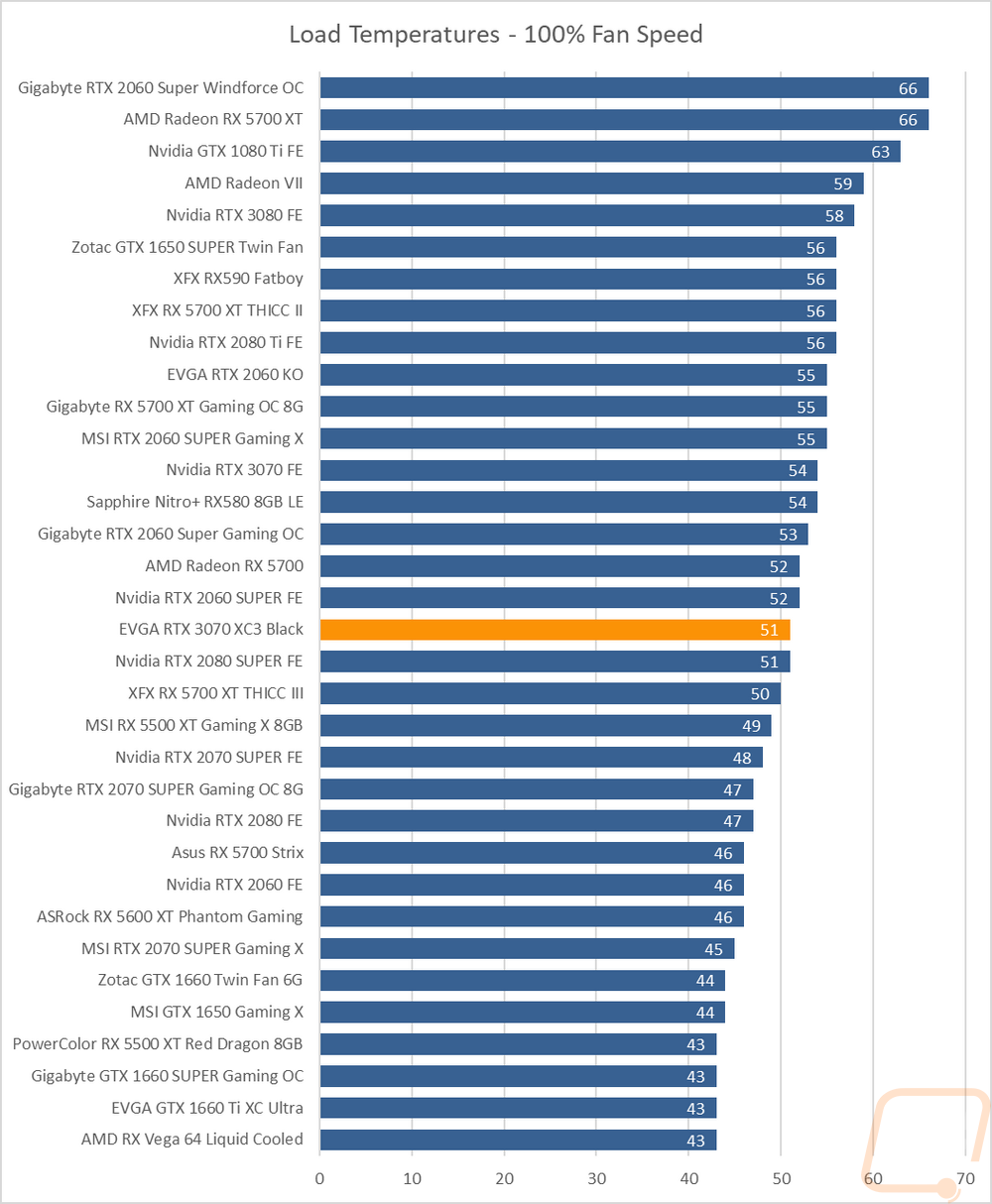 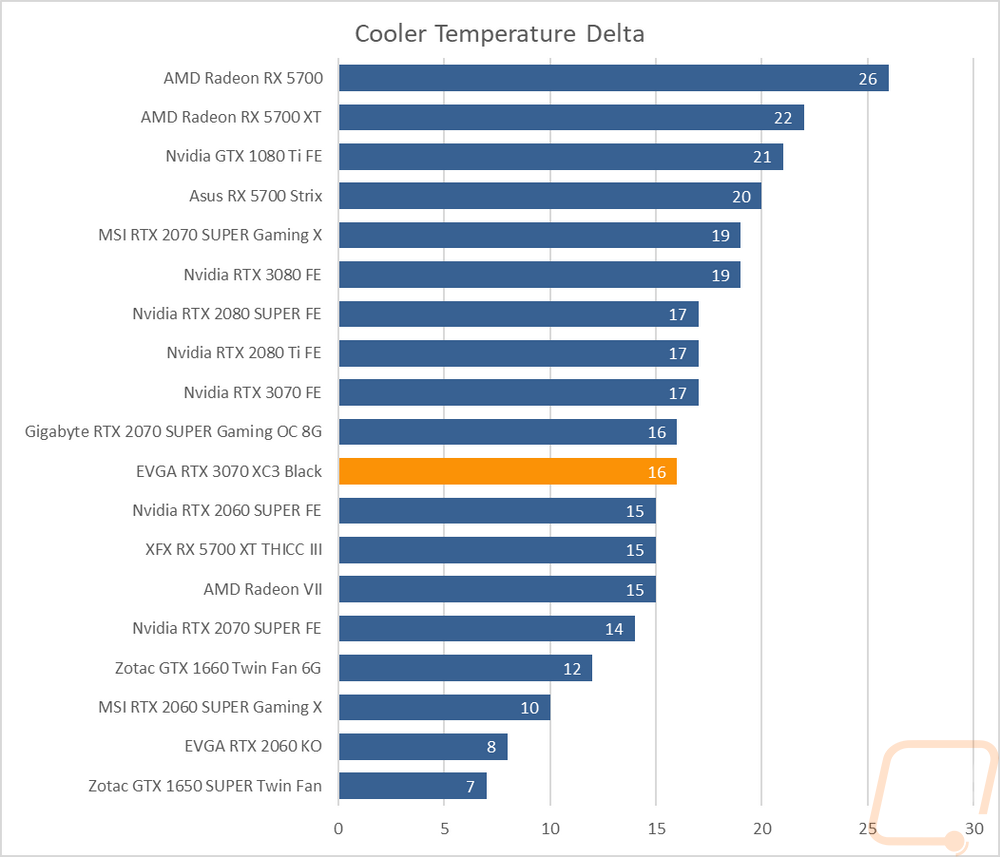 While running the stock fan profile testing I also took the time to get a few thermal images so we could see what is going on. On the fan side, you can see that most of the heat is coming from between the first two fans where the GPU  is at and towards the end, things are running cool. You can also see from this point of view where the air blowing out the bottom of the cooler is heating up the motherboard as well. The top view shows the difference between the left and right sides is significant. The back view explains why there seems to be a hot spot on the side of the GPU closest to the PCI bracket which is where they have the VRMs. 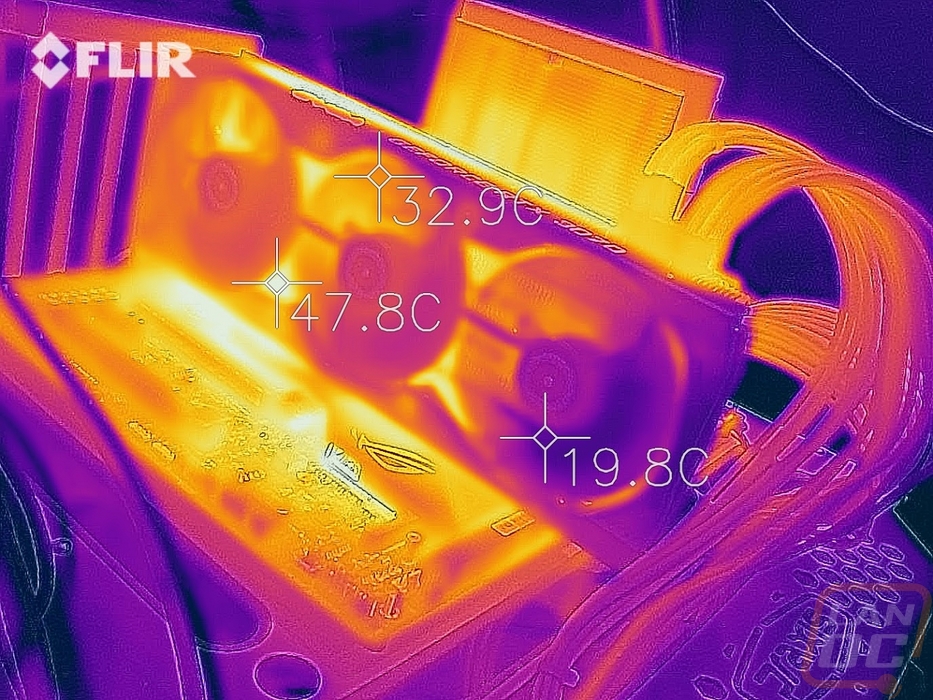 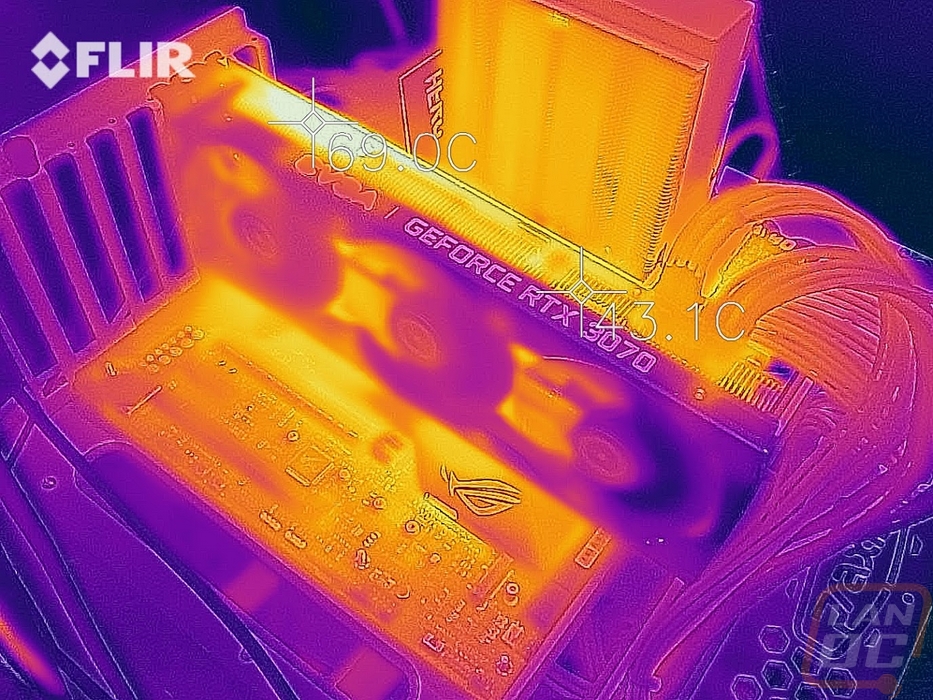 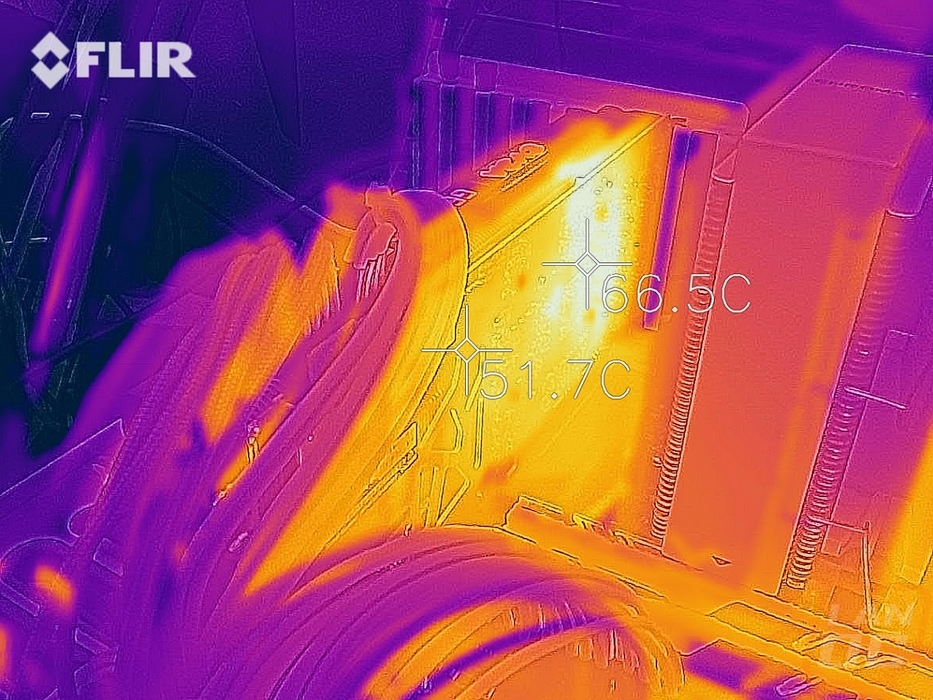