Once you decide which GPU you want to go with, you have to decide between all of the different models available. Clock speeds play a part as do pricing and aesthetics. But there are a couple of other areas that you should consider that are card specific. Power is one but it is in some ways tied with the overclock or at least how the overclock is done. There is also cooling performance and noise performance which both have to do with the cooler design.

The first test was looking at power usage. To do this I used our Kill-A-Watt to measure at plug power for our test bench while loading the card. I did this twice with two different loads. The first was 3DMark Fire Strike Performance using the combined test which combines CPU and GPU loads similar to most games. This includes the 3900X and the video card along with motherboard power as well. The Gaming OC was noticeably higher at 372 watts and the Windforce was much better at 328. In fact, that was 2 watts less than the Founders Edition. The Gaming OC, on the other hand, was right there with the RTX 2070 SUPER Founders Edition which is a lot of power! For the second test, I used AIDA64’s Stress Test to load just the GPU. There is still some CPU and motherboard power used here but it is a lot less significant. The GPU is under a little more load though. Here the Gaming OC pulled 263 watts which was close to the X 5700 and higher than the 2070 SUPER Founders Edition. The Windforce was 4 watts above the Founders Edition 2060 SUPER with 248 watts as well and 4 watts below the Gaming X which fits its clock speed. It's really clear though that to get that 1815 MHz clock speed on the Gaming OC that Gigabyte really cranked up voltages. 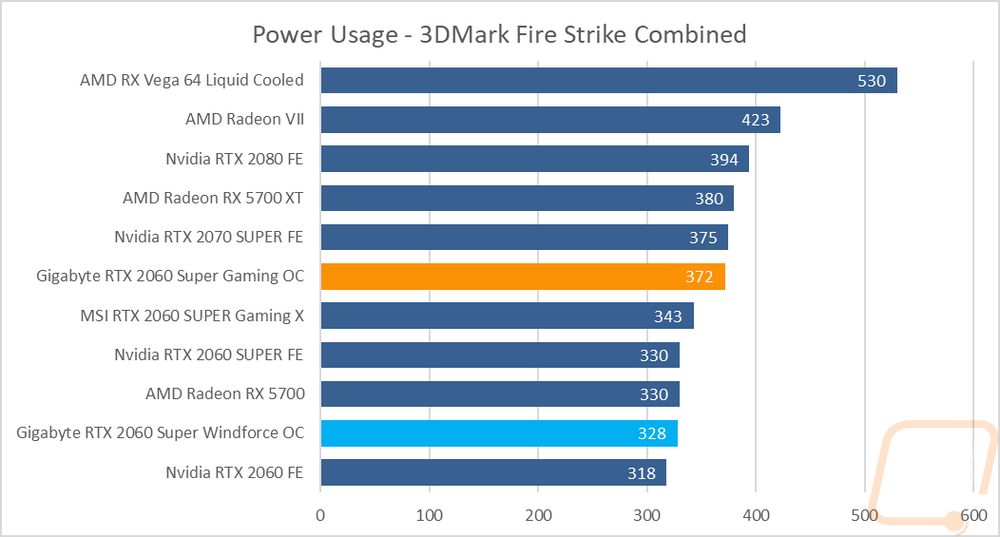 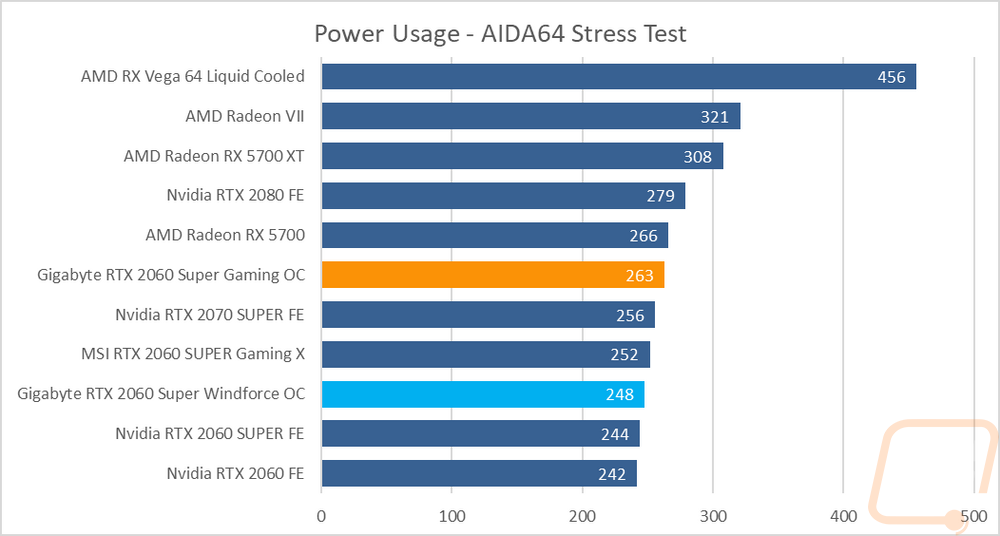 As for noise performance, I did a few different tests as well. I wanted to look at 100% fan speed and 50% fan speed noise levels as well as under load noise levels to get a feel for what you will experience in any situation. The Gaming OC did surprisingly well with its three fans at both 100% and 50% loads with only the Windforce OC being quieter. The reason for that was obvious when you take a look at the fan RPM numbers where you can see them both at the bottom of the charts as well. For the under load test, I ran the AIDA64 Stress Test for over a half-hour and when it leveled off I measured the noise level. Here you can see that while the fans are quiet, when under load they were running a lot higher and this evened out to being in the middle of the chart, not at the bottom like the other results. The 2060 SUPER FE and Gaming X were both quieter under load. These results hint a little that both cards might not have the best cooling performance, they clearly had to spin the fans up a lot higher than the other 2060 SUPERs under load. 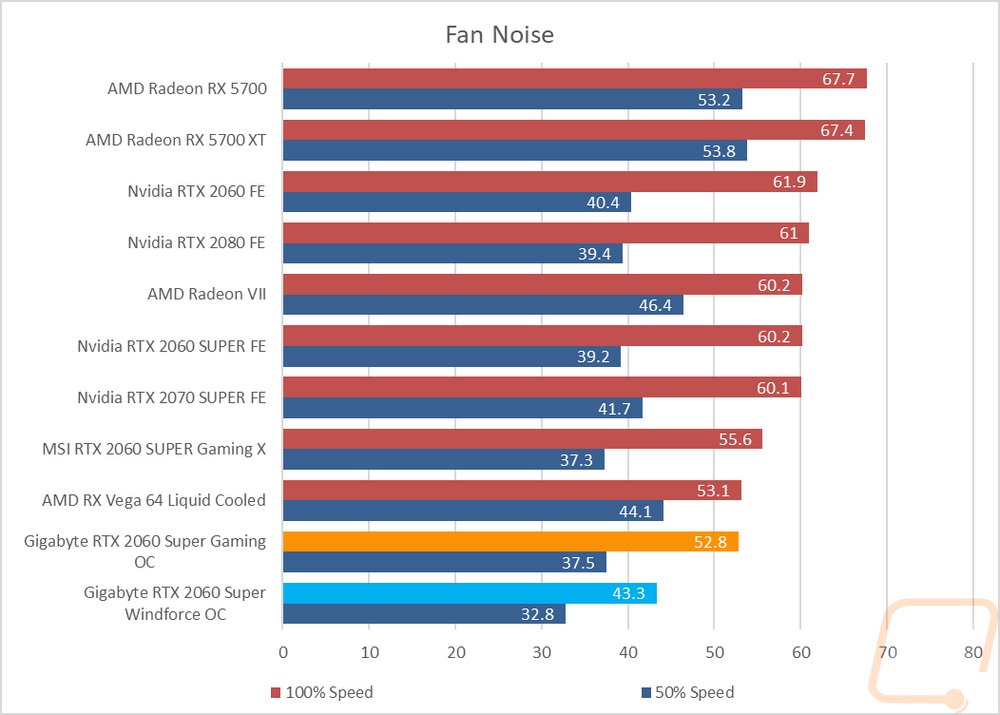 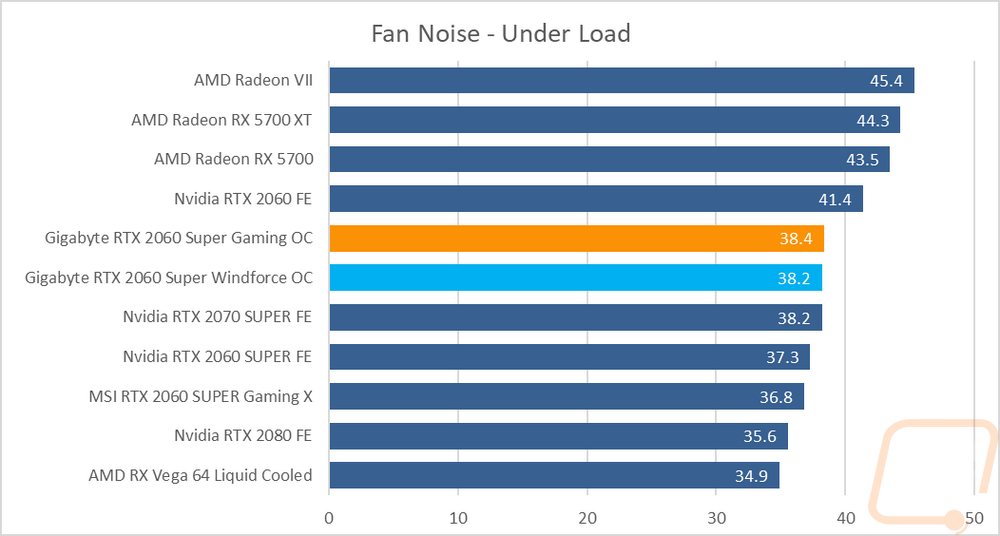 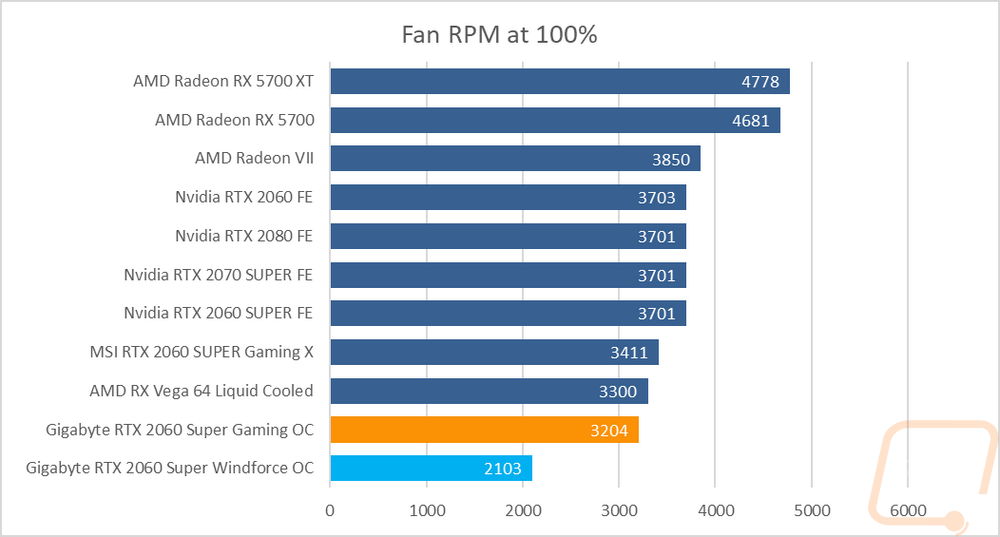 To confirm what I suspected in the noise testing I had to run our thermal testing. For this, I used AIDA64 once again for its Stress Test. I ran this test twice. Once I tested using the stock fan profile and then again after cooled down I tested at 100% fan speed. I ran the test for a half hour and confirmed that the temperature had leveled off to its peak and documented the results. With the stock fan profile, the Windforce actually ran higher than the higher clocked Gaming OC. The Gaming OC was close to the Gaming X in temperature at 66 degrees and the Windforce was up over the Founders Edition with 71 degrees. The second test at 100% would show if there was still cooling performance leftover in the coolers. The Gaming OC went from 66 down to 53 degrees where the Windforce went from 71 to 66 showing why it was so noisy under load, it was getting close to the max performance the cooler could do. The Gaming OC does still have some cooling performance left and it was even lower than the Gaming X but clearly, it was noisy because it has a more aggressive fan profile. The Founders Edition still did better though. I can understand the Gaming OC not catching the Founders Edition but I’m surprised the Windforce OC didn’t considering how close its clock speed is to it. 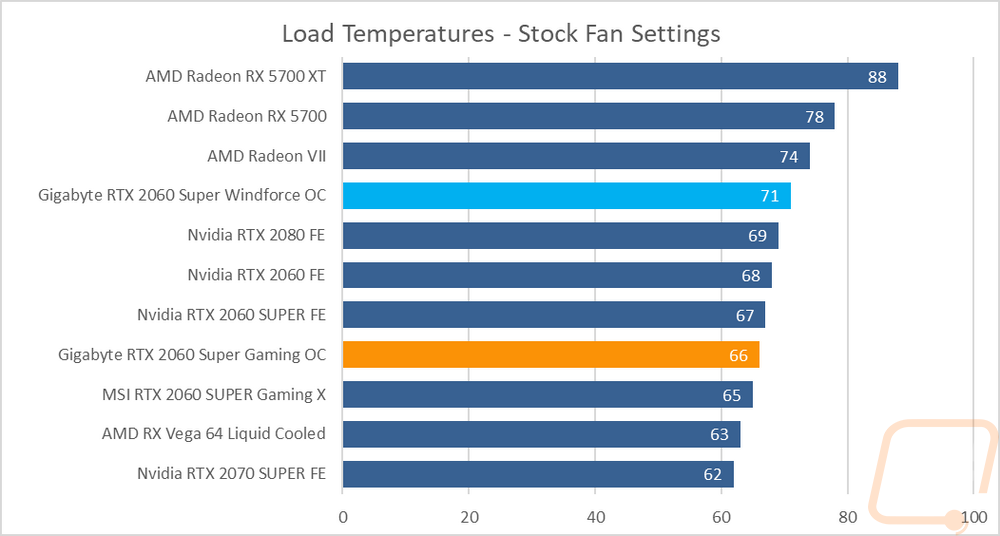 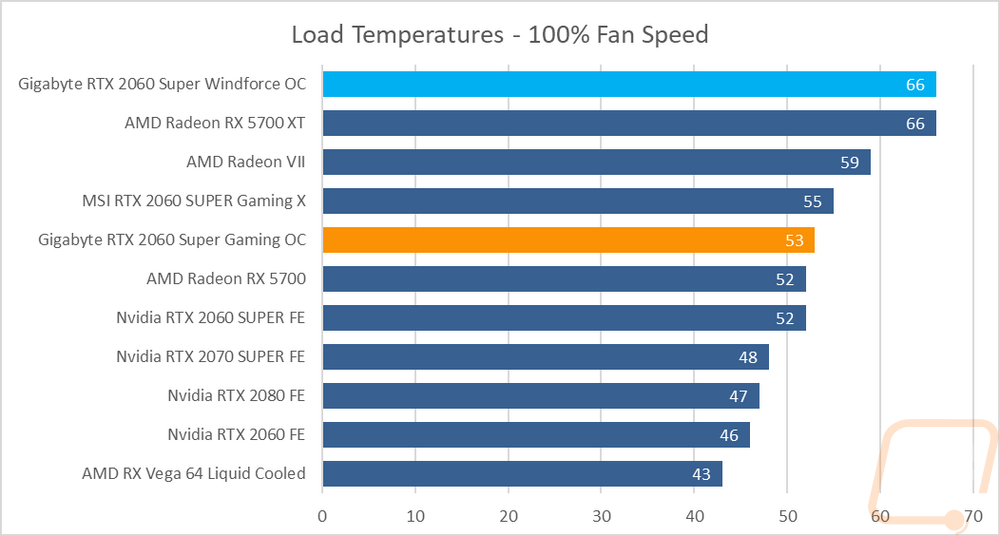 While under load on the stock fan profile I also took a look at both cards with the thermal camera. This is the Windfoce OC with its dual fans. You can really see just how much hotter it is running on the left fan over the GPU as well as how a lot of the heat is collecting up under the card where they had most of the openings. I really think this design would be helped a lot with the fans moved over to the left more to get that cooling more over the GPU side of things and also to hot have that unused end area. Now the top edge of the card showed a very hot area in the gap at the top but remember there is also very little airflow coming out this way, this shows how hot the heatsink is right over the GPU/Memory area where it is much cooler over on the VRM end. This was visible on the back a well, even through the plastic backplate with the hotspots near the center and on the center and GPU side of the card. 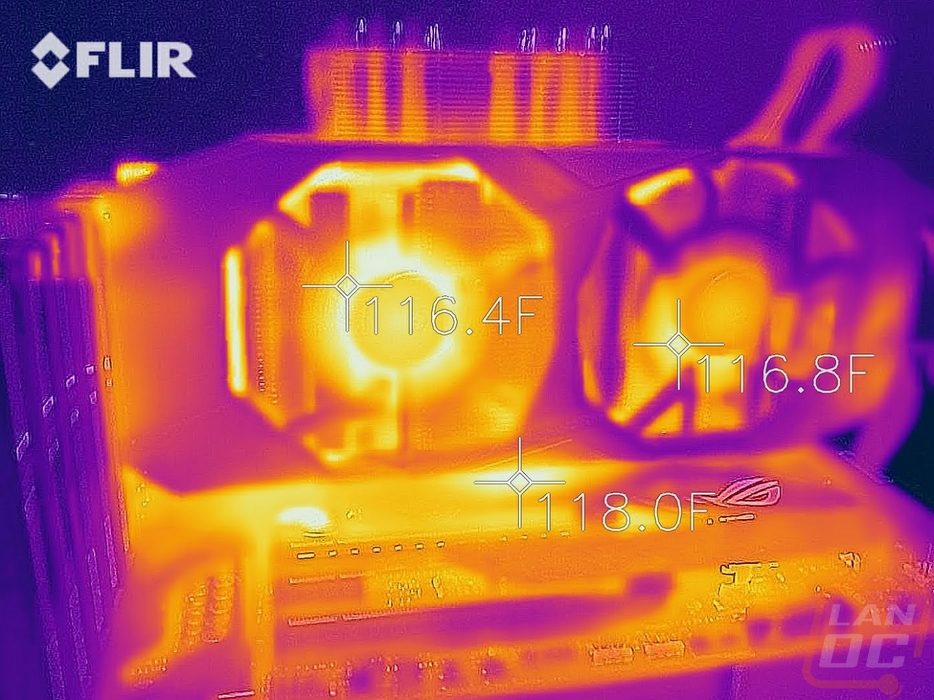 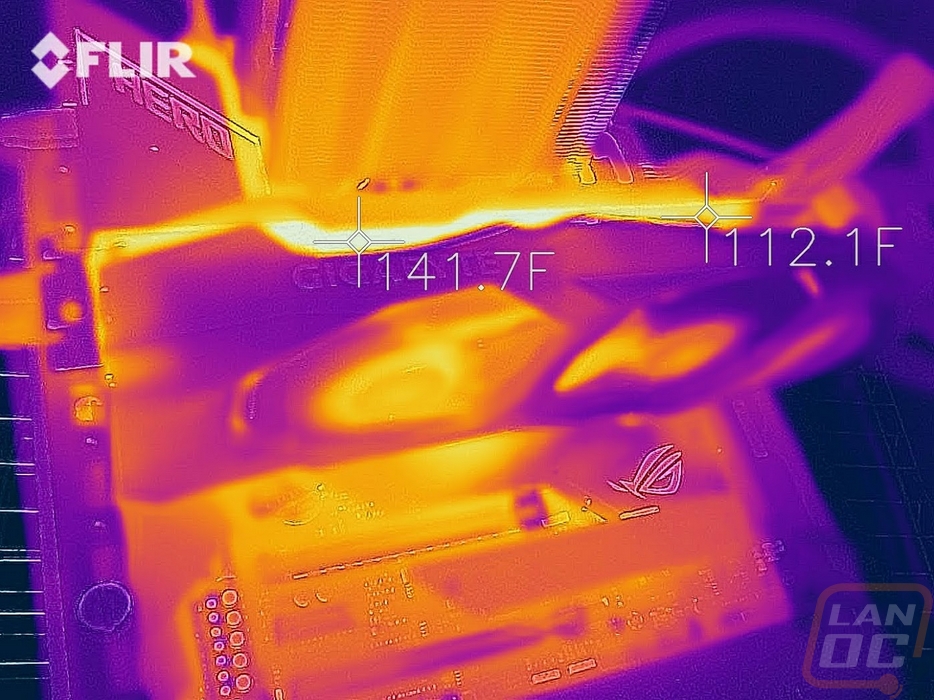 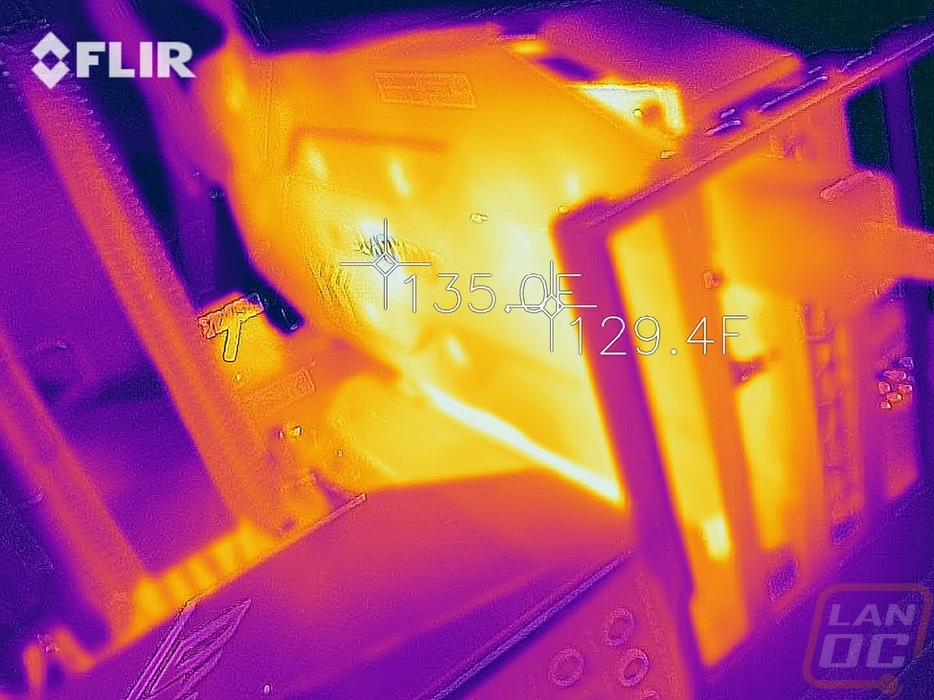 For the Gaming OC, the heat looks much better spread out across all three fans which shows how well the heatpipes were working on this long card. The left fan does have a few degrees more but only 3 degrees between the left and right sides of the card on this side. You can see a hot spot up under the card as well with a lot of air being blown that way, but this card also had airflow openings at the end and on the top. The top edge shows that airflow and is a lot cooler than the Windforce was at the same area with the Gaming OCs vertical aligned heatsink. The backplate on the gaming OC is telling a different story though and I think this is actually the main issue that caused some slowdowns. You can really see how hot the VRMs are getting on that end of the card. The GPU has solid cooling and heatpipes pulling all that heat across the card. But the VRMs, especially at the bottom are the hottest part of this card. I suspect that this was causing the long test slowdowns that I saw in a few compute tests like Blender than run the same load for a long time. I was curious if additional cooling would help the Gaming OC and I did see a performance improvement by running the fans at 100%. 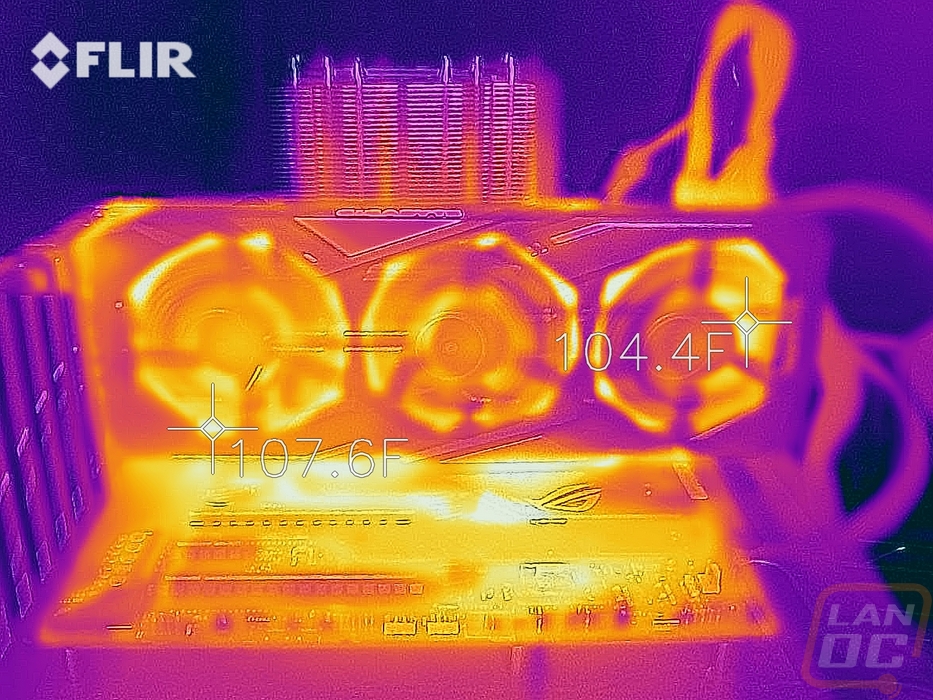 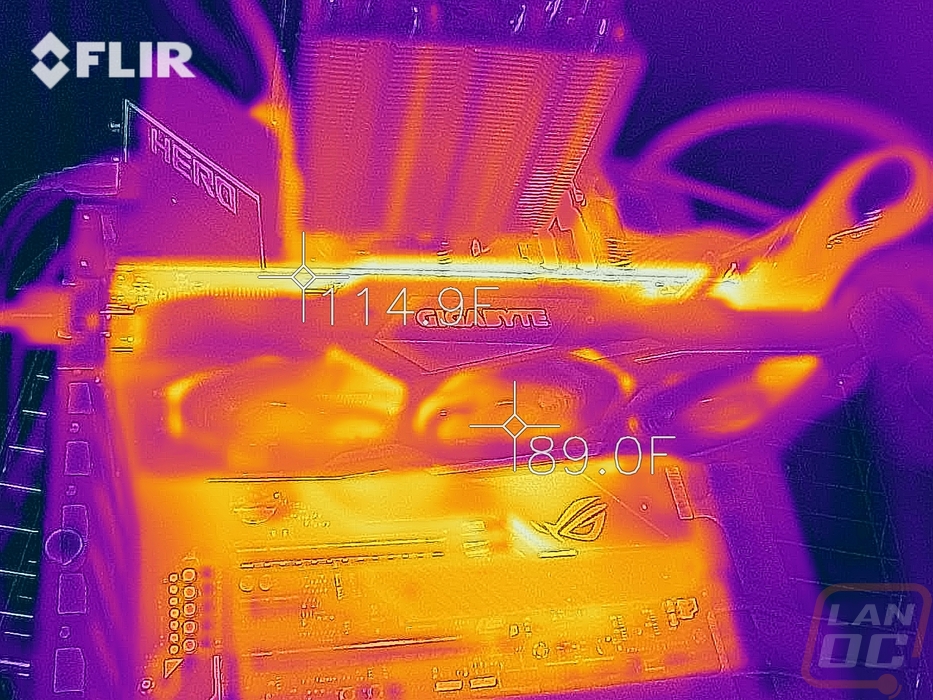 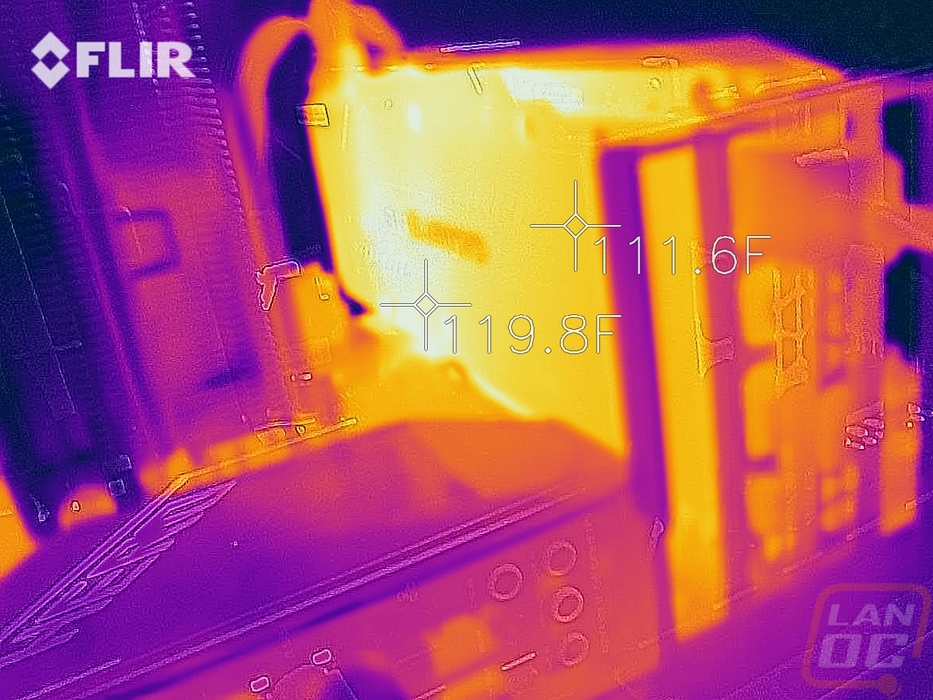