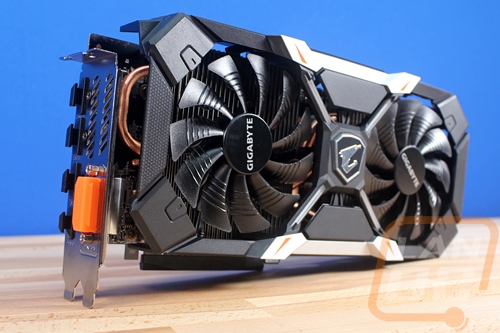 With this being the first 9Gbps GTX 1060 I have had in the office, I wasn’t entirely sure what to expect. I knew the bump up to 11Gbps was a nice improvement on the GTX 1080 but with the GTX 1060 focused on a different market I wasn’t sure if it would make a difference. After going through the benchmarks I can see that the faster memory in addition to a slightly higher GPU clock speed, when compared to past overclocked GTX 1060's, did translate into a bump in performance. It was especially apparent when going up into 1440p where the card performed better than I expected. When compared to the RX 580’s the Aorus GTX 1060 9Gbps was faster at 1440p and 4k not that 4k even matters at this price point but at 1080p the RX 580’s still had a slight edge.

Overall though this card really impressed me with the areas that Gigabyte had control. The power usage was significantly lower than the AMD cards and even with a big overclock it wasn’t far from the reference GTX 1060. The cooler ran very quietly and even while running quietly the cooling performance was great. I was unsure about the whole VR-Link where they added two more HDMI ports that face inside of the case but assuming you can even find one and assuming you even have drive bays in your case, the add-on bay device would make hooking VR kits like the Vive and the Rift much easier. Really the only thing I didn’t like about the card was its overall styling. When I’m building a computer I tend to go with mostly neutral components and let things like the water cooling, the lighting, or the case do the talking. The really aggressive styling on this card was too much for me but luckily I’m just one person, it might work for you.

So is this the card to pick up? Well, honestly the entire market at this price point is all jacked up right now. Cryptocurrencies have made it nearly impossible to get any RX 580’s as well as anything used from AMD. They are also starting to drive up the pricing on GTX 1060’s as well. That said at $299.99 the Gigabyte Aorus GTX 1060 Xtreme Edition 9 Gbps is still the highest priced GTX 1060 on Newegg. The 9Gbps cards from everyone else are about $10 cheaper but at least right now you can find other GTX 1060’s, even from Gigabyte that are almost $100 cheaper. With that big of a gap, the bump in performance isn’t really worth it. I would be looking to save up a little more for a GTX 1070 for a BIG jump in performance or save money with a cheaper GTX 1060. Now if card available opens up the debate over the RX 580 and the GTX 1060 9Gbps is a whole different issue. With the RX 580 being faster at 1080p a resolution that I would expect to see most people at this price point gaming on, then I would be leaning that direction. 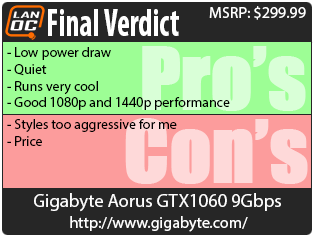 You might call him obsessed or just a hardcore geek. Wes's obsession with gaming hardware and gadgets isn't anything new, he could be found taking things apart even as a child. When not poking around in PC's he can be found playing League of Legends, Awesomenauts, or Civilization 5 or watching a wide variety of TV shows and Movies. A car guy at heart, the same things that draw him into tweaking cars apply when building good looking fast computers. If you are interested in writing for Wes here at LanOC you can reach out to him directly using our contact form.
Discuss this article
Log in to comment
Posts in discussion: Gigabyte Aorus GTX 1060 Xtreme Edition 9 Gbps

We have 1047 guests and one member online