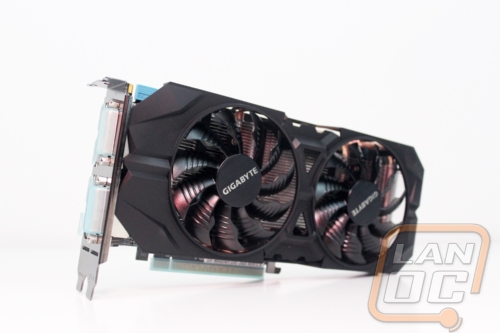 So now that we have ran the Gigabyte GTX 960 through our benchmarks and taken a closer look at it, how does it compare to the competition? Well for starters, even with a slightly lower overclock than the Asus 960, this card out performed both of the other GTX 960’s that I have tested in nearly every test. The difference wasn’t huge but it was noticeable. You still don’t want to look at this card for 1440p use, but if you are gaming at 1080p this is a great card to get the job done without going overboard with an expensive card. I really like the all blacked out design that Gigabyte went with as well, it is simple and to the point. Adding the second DVI port back was a nice touch as well, if you need two DVI ports the MSI and Asus won’t do the job for you at all but the Gigabyte will. That said the Gigabyte card was a little louder than the other cards and it also ran a tad bit warmer.

As for its price, currently this Gigabyte card is selling for a little less than the Asus 960 and well under the MSI 960 making it a good value as well. As long as you don’t mind the lower cooling performance this is a great value for a top performing GTX 960. 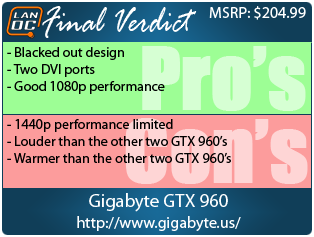 You might call him obsessed or just a hardcore geek. Wes's obsession with gaming hardware and gadgets isn't anything new, he could be found taking things apart even as a child. When not poking around in PC's he can be found playing League of Legends, Awesomenauts, or Civilization 5 or watching a wide variety of TV shows and Movies. A car guy at heart, the same things that draw him into tweaking cars apply when building good looking fast computers. If you are interested in writing for Wes here at LanOC you can reach out to him directly using our contact form.
Discuss this article
Log in to comment
Posts in discussion: Gigabyte GTX 960