With the introduction of the GTX 460 last July, Nvidia changed the game entirely. The 460 showed amazing performance and overclockability while being priced for someone looking for a budget build. The GTX 460, seven months later, is still exactly that. With the introduction of the GTX 500 series cards recently, Nvidia is now introducing the GTX 560 Ti. While not a replacement for the GTX 460, the GTX 560 Ti occupies the position just above it. Nvidia told us that with the GTX 560 Ti the “sweet spot” just got sweeter, let’s dive in and find out. 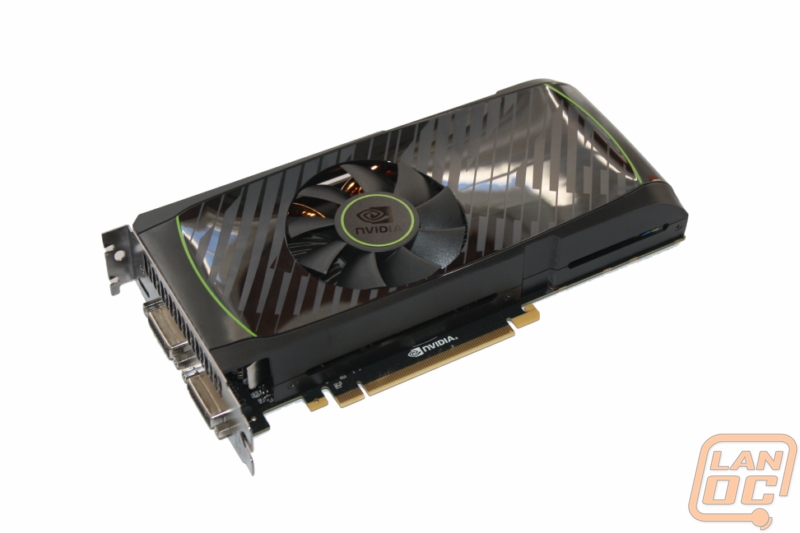 Finely tuned, transistor-level changes were incorporated into the GTX 560 Ti (like the GTX 580/570) to improve power efficiency, such as the jump from the 480 to the 580. They also added more CUDA Cores (384) and eight PolyMorph Engines. As you might be able to tell with the addition of the PolyMorph Engines, Nvidia is going all-in with DirectX11. They were very adamant that 2011 is the year of DirectX11, something we have also heard from the other side of the fence. Nvidia was quick to point out that their research shows that the average customer upgrades their GPU every three years. Nvidia’s most popular is the 8800GT, topping their Steam charts, which would put a large portion of their customers in prime upgrade time. Of course the customer that is willing to hold on to their video card for three years may not be looking to throw down $500+ for a 580. This is where the GTX 560 Ti comes in, with a suggested retail price of $249, a GTX 560 Ti is reasonably priced and good for someone who is looking for a video card that will last without breaking the bank. 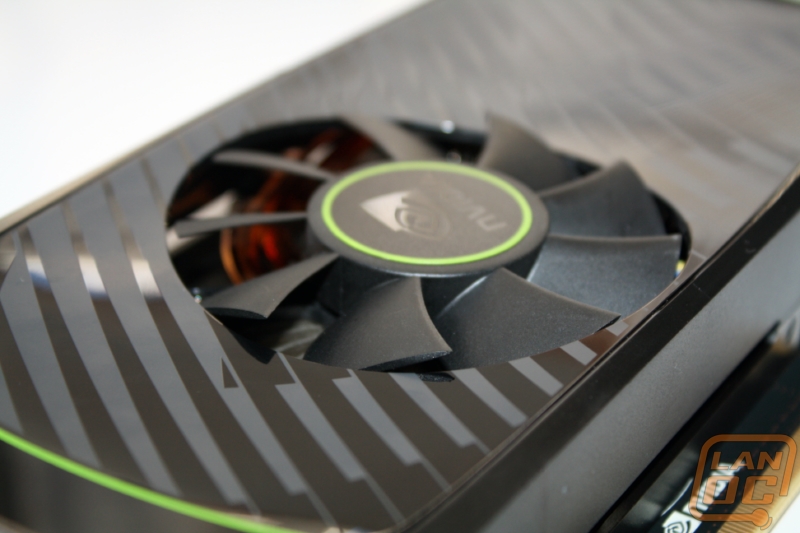 Without getting into the performance numbers (we will do that later in the review), lets break down the GTX 560 Ti. Physically, when compared to the GTX 460, the GTX 560 Ti is ¾ inch longer. The reference heatsink design looks very similar to the GTX 460’s including the protruding fan blades that I am personally not a big fan of. Both cards require two six pin connections and with those 6 pins facing the back of the card you should plan for an extra inch of space when picking a case. Those two power connections will push (according to Nvidia’s numbers) 170 Watts at Thermal Design Power (TDP). They are quick to note that this number is reached in real world testing, programs like Furmark can cause the card to draw more than that. Because of that they are recommending a 500 Watt power supply if you plan on running a GTX 560 Ti. Around back the dual slot design houses two DVI-I connections along with a Mini HDMI connection. 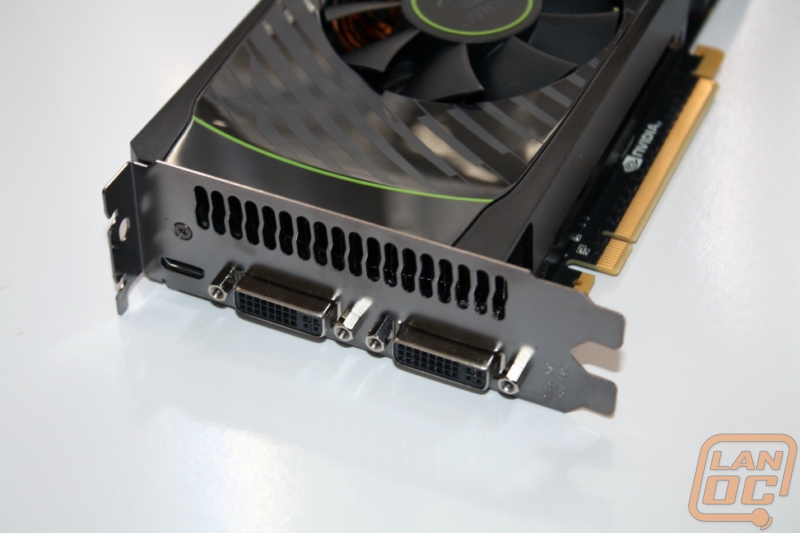 When running through the specifications (below) the overclockers among us may be quick to point out the 822 Mhz clock speed this time around. With the GTX 460 running at 675 it’s easy to assume that they just bumped up the clock speed, cutting out the overclocking margin and called it a day. Thankfully this isn’t the case. This time around they have added a beefy 4-phase power circuitry, faster 5Gbps memory modules, and improved cooling. You may remember just a minute ago I said the cooling looks the same as the GTX 460. Thanks to the plastic shroud you can’t see the larger heatsink and cooling fan, additional heatpipes, and a baseplate was added to cool the memory and power circuitry. 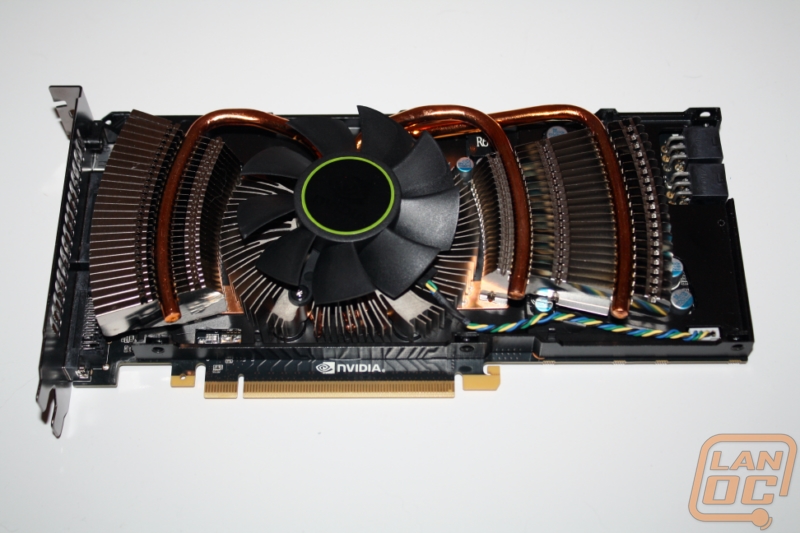 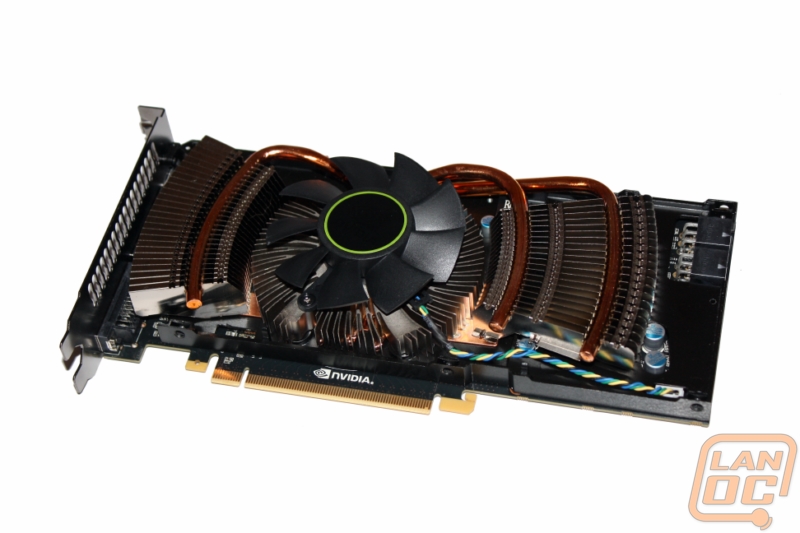 The changes mean even at 822 MHz, a speed that we saw on the overclocked versions of the GTX 460, you will still have more than enough headroom. 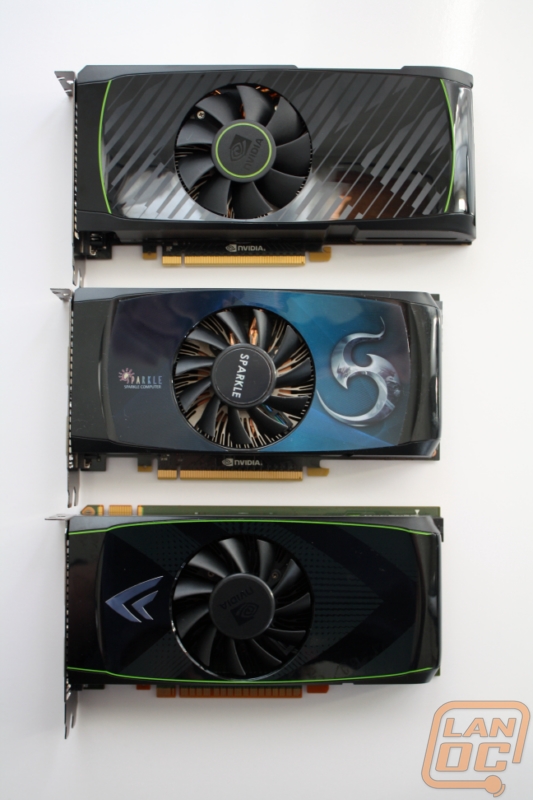 Normally I would go over the packaging but being a reference card it is only shipped in a static bag (along with the FedEx box and bubble wrap of course). Besides you guys are more concerned with how the GTX 560 Ti is going to perform, right? 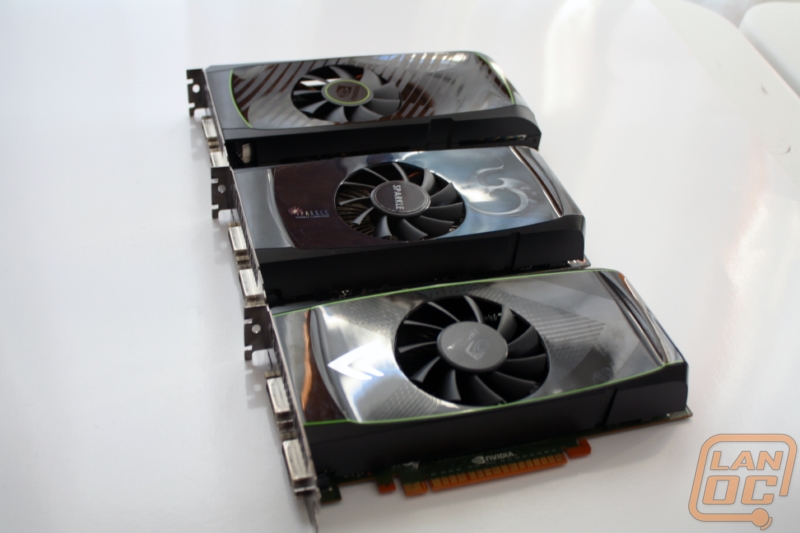 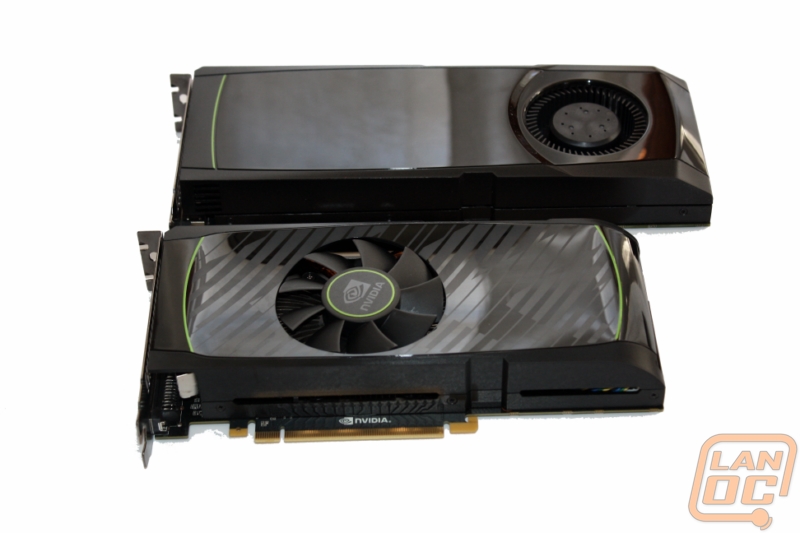 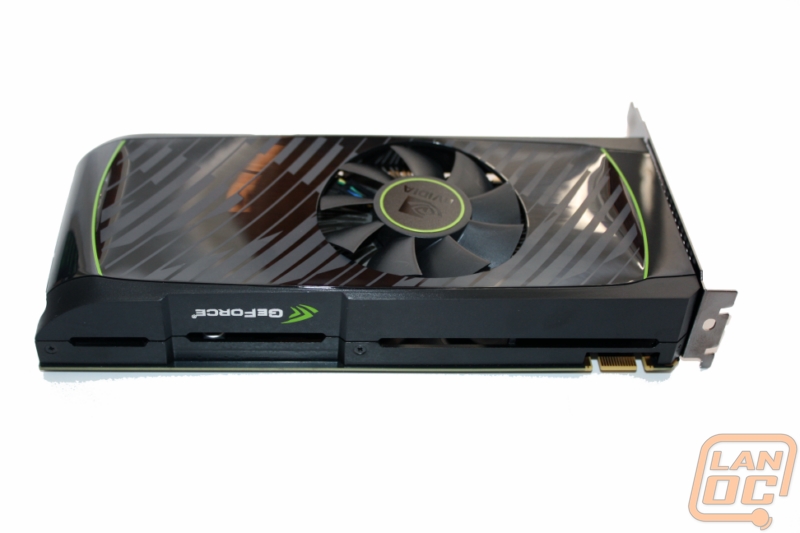 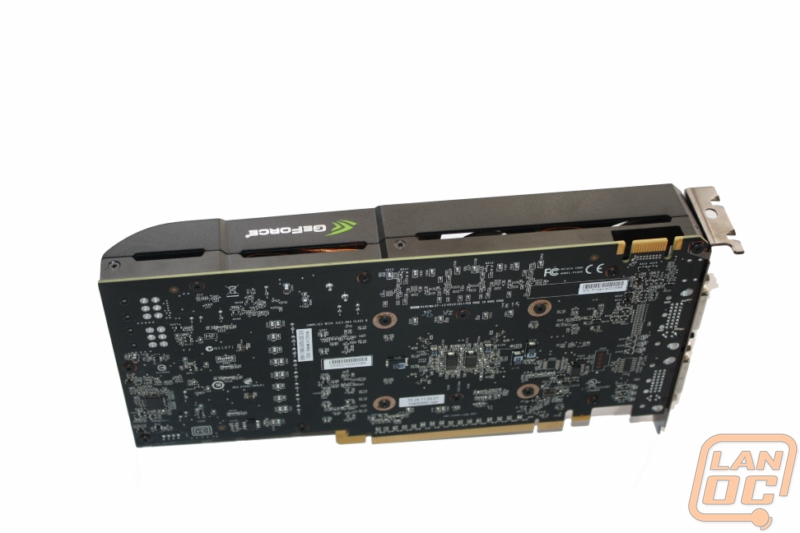 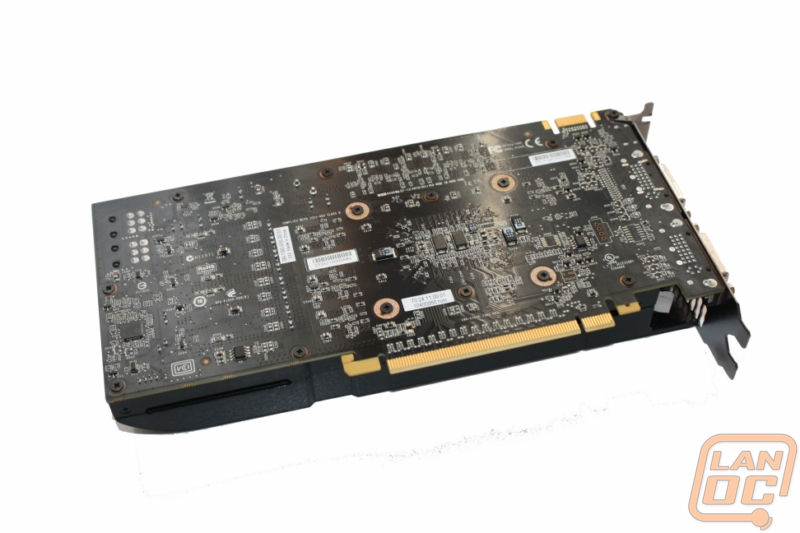 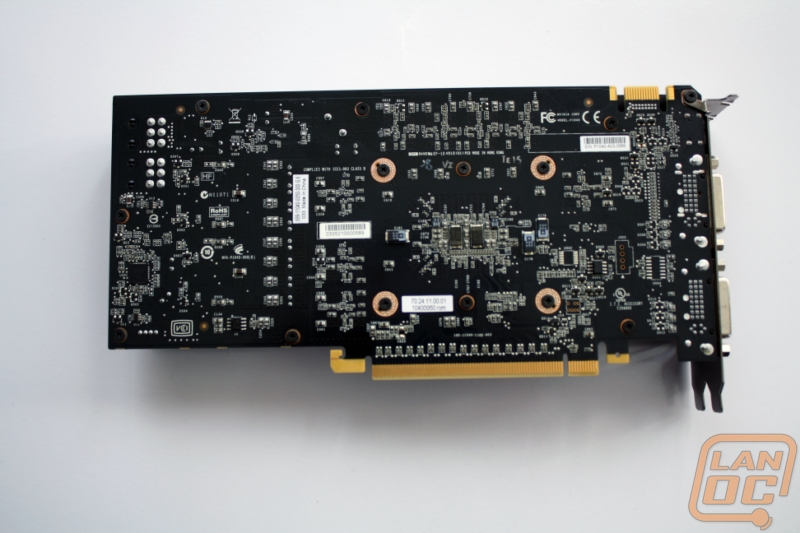 With our benchmark processes changing recently some of the results below are only against a few cards while the others are against many cards. We will be filling in the blanks slowly. You can still see the GTX 560’s performance both in game and through synthetic benchmarks. 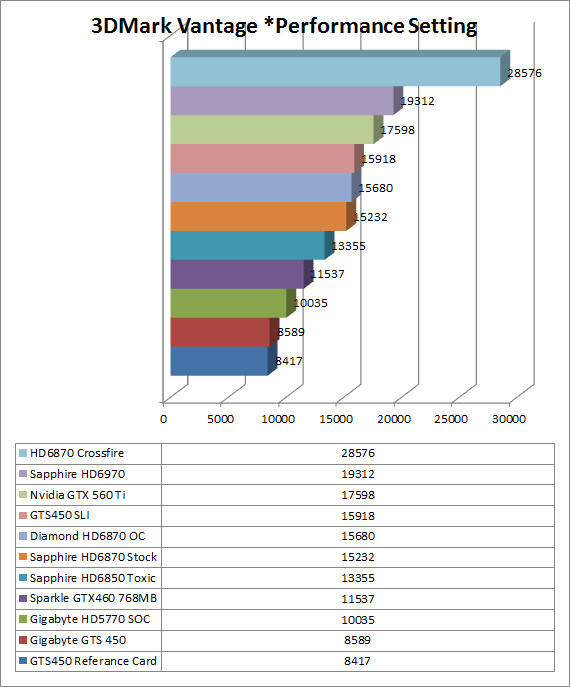 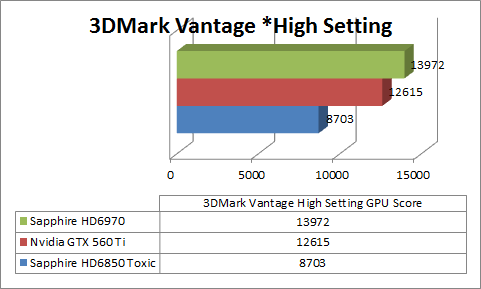 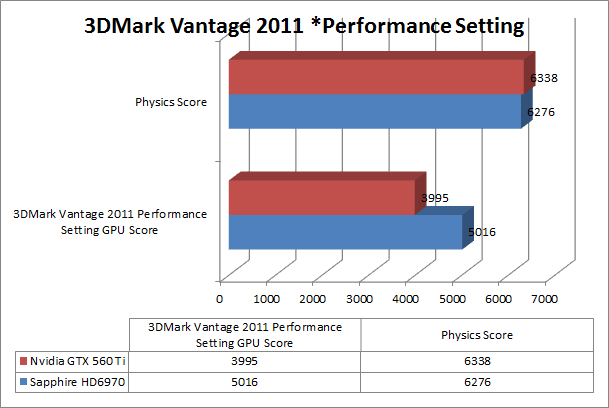 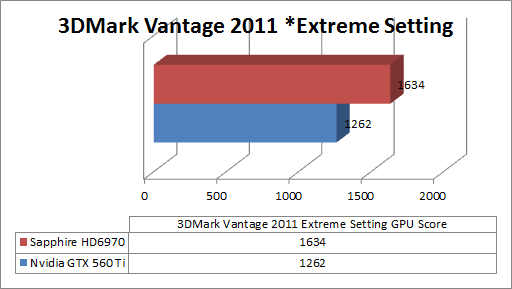 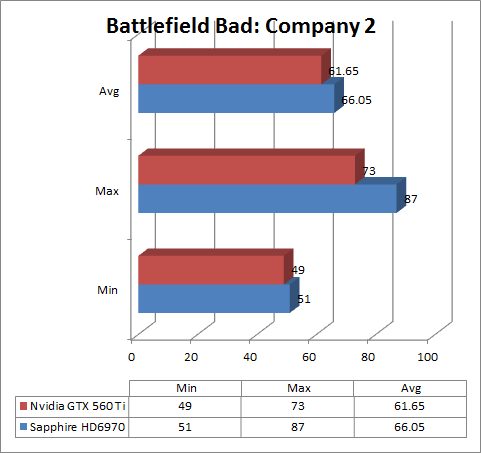 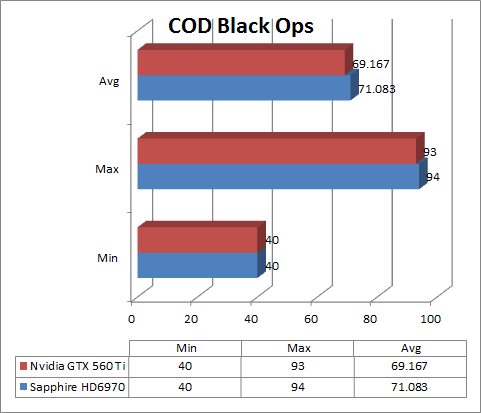 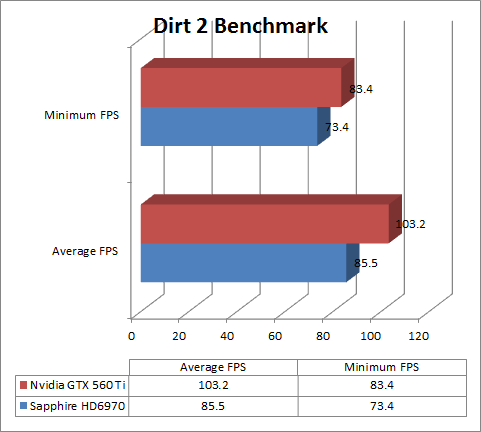 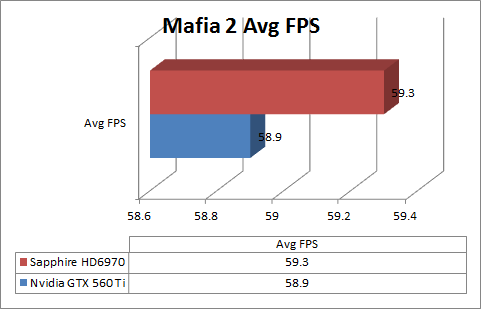 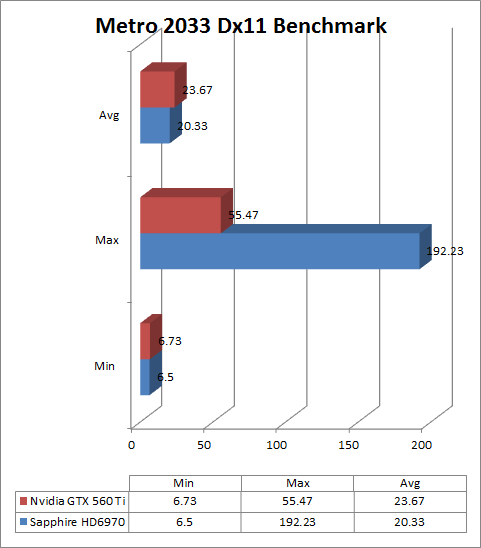 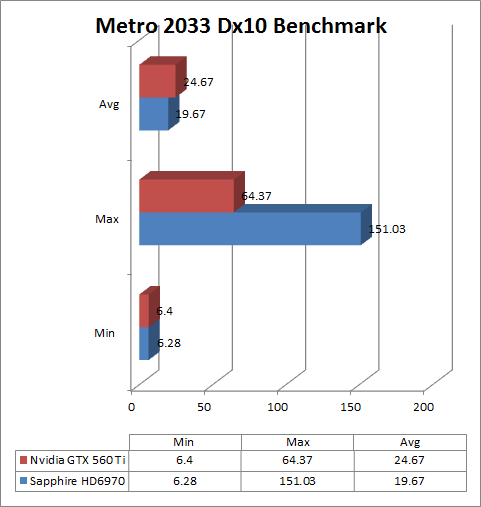 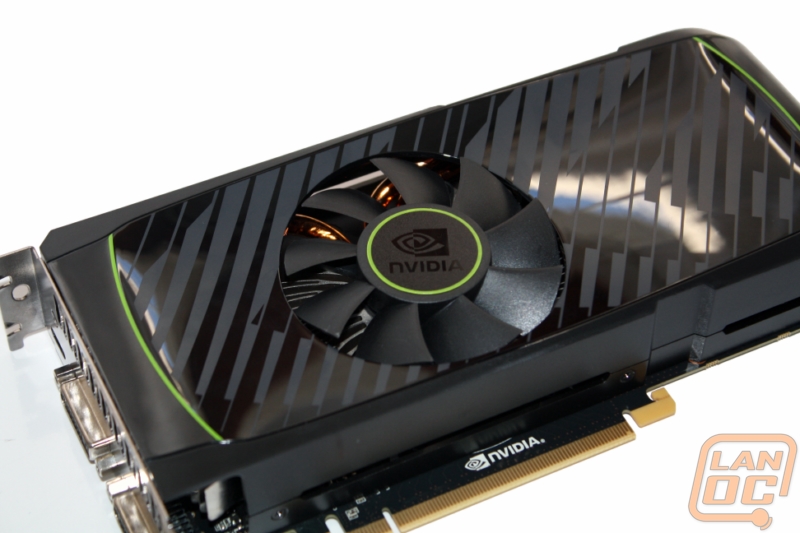 Of course it’s not just about the cards performance, even though it is MOSTLY about it. It’s also important that the card have a tolerable noise level and that the cooler keep everything cool in the heat of the battle. In our case the noise level was comparable to our 460 and was only noticeable when the fan speed went up. In my testing I wasn’t even able to get the fan to speed up in game or otherwise. My idle temps ran at 28 to 29 degrees Celsius, with temps reaching 58 while running through 3DMark Vantage 2011. 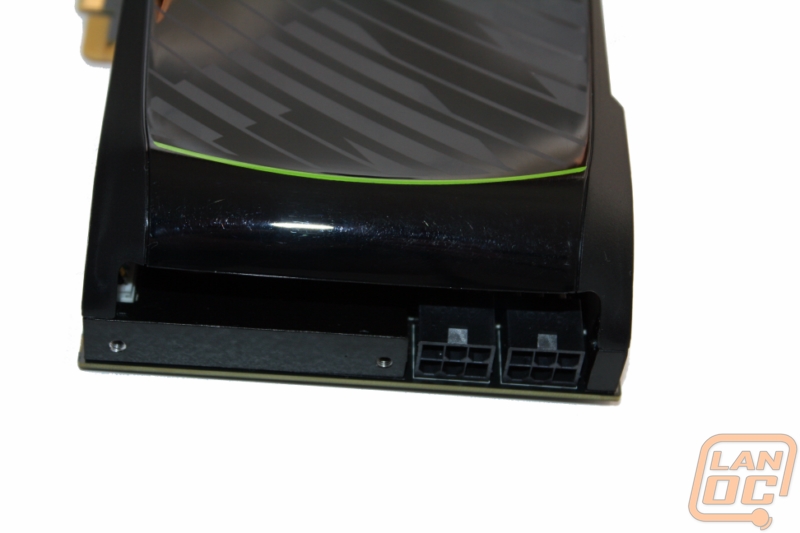 I touched early about the overclocking headroom of the GTX 560 Ti but I had to put it to the test myself also. While messing around a little, without spending too much time with it I was able to get stable results while at a healthy 942 MHz core clock speed, a nice jump over the 822 Mhz stock. I also received word that Gigabyte will be introducing a 1 Ghz model, I am sure with a little tuning that clock is obtainable to anyone willing to put the time in. Running 3DMark Vantage 2011 performance setting on the overclocked card netted a bump from 3995 to 4650 on our GPU score, inching even closer to the HD6970 without adding anything to the cost. 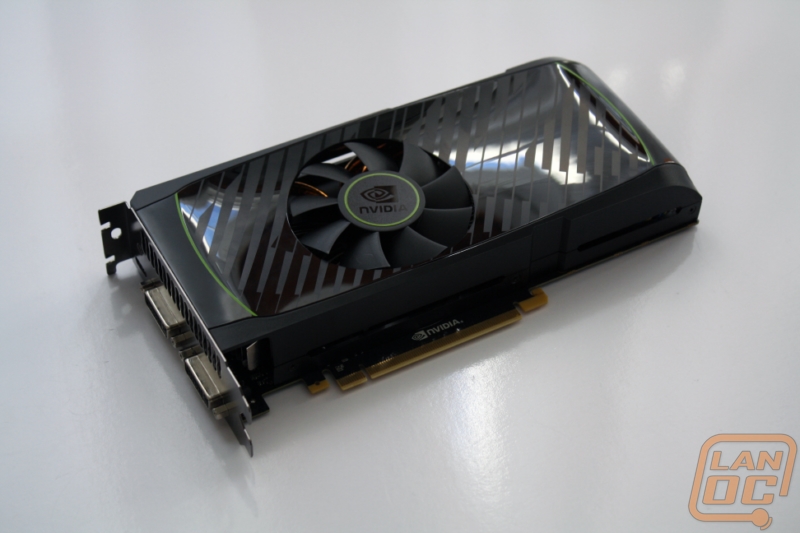 I think Nvidia summed it up perfectly when they said the sweet spot just got a little sweeter. For those of you who are looking for the best performance money can buy, you should skip over the GTX 560 Ti, but if you have to save money wherever you can to save for your next video card upgrade you shouldn’t wait any longer. With the GTX 460 still staying around the GTX 560 Ti comes in at just under $250, less than what it would have cost to buy the 5 games I used to test the card (when the game’s first came out obviously) . The only reason I could give to not go with a GTX 560 Ti is if you wanted to go with TWO GTX 560 Ti’s. 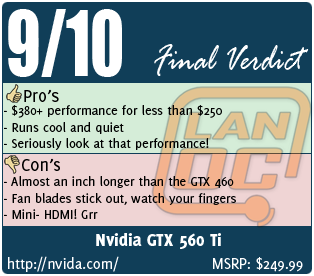 You might call him obsessed or just a hardcore geek. Wes's obsession with gaming hardware and gadgets isn't anything new, he could be found taking things apart even as a child. When not poking around in PC's he can be found playing League of Legends, Awesomenauts, or Civilization 5 or watching a wide variety of TV shows and Movies. A car guy at heart, the same things that draw him into tweaking cars apply when building good looking fast computers. If you are interested in writing for Wes here at LanOC you can reach out to him directly using our contact form.
Discuss this article
Log in to comment
Posts in discussion: Nvidia GTX 560 Ti

I am thinking they are going to sell a boat load of these cards. That is great performance at a small price. Hell, I paid 149 for my EVGA FTW 450 card. Then again, I was limited by the Shuttle's PSU.

Great review and right up as always Wes. Liking the new graphs much better than the old ones.

I would like to see how well 2 of these do in SLi.

garfi3ld replied the topic: #13469 26 Jan 2011 03:08
the nvidia reference card doesn't come with anything but I'm sure most if not all of the cards shold will come with it. Thats not the problem for me, if i need a replacement cable or I go to a LAN and forget the cable you will have a real hard time picking one up at most retailers. Not to mention the difference in price between a normal HDMI cable compaired to a mini HDMI cable on a site like monoprice.

I didn't point it out in the review but AMD has replied with a 1Gb version of their 6950 for about $20 less than the 560, its hard to say who will come out on top on that one. I do know that AMD is using a smaller die and because of that they will be able to play the price game much better than Nvidia.

garfi3ld replied the topic: #13472 26 Jan 2011 06:50
really? Most of my monitors are HDMI native, hooking them up is as easy as plugging one connection in. No screws or anything like that. Plus you can run sound through it when I don't have my headset on or my speakers hooked up