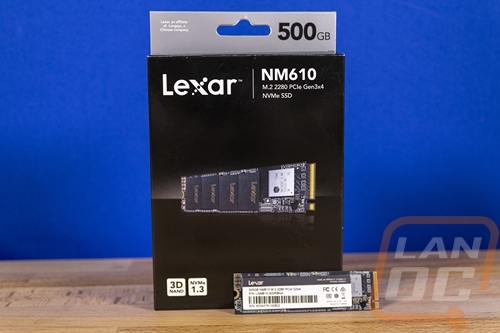 While the Lexar name is extremely well known when it comes to SD cards and flash drives. But they do make SSDs. Not long ago they launched their NM610 which is an M.2 NVMe drive and I’ve had the chance to check it out. I’m a little late due to the craziness that has been going on. But today I’m going to take a look at the Lexar NM610 and see what it is all about and find out how it performs. They have it listed as up to 2100 MB/s on the read speeds which would put it in as a mid-range NVME SSD so I’m curious to see if it lives up to that and how it compares to similarly priced drive. Let’s check it out!

Being an M.2 drive, there is only so much to check out both for packaging and for the drive so both of those sections are combined here. The drives box has that standard 2.5/M.2 sized box and is black with a large photo of the drive floating in the middle. The Lexar branding is there along with the model name as the top. They also list the drive length (2280) and that it is a PCIe 3.0 drive running at x4 lanes. The capacity is up on the top edge where the drive hangs and our sample is a 500GB model but they are also available in 250GB and 1TB. They also highlight the 3D NAND in the bottom corner. Around on the back, most of the same information is repeated but they also show that 2100 MB/s read speed claim, and they mention this is a nice upgrade for your laptop or desktop and that is repeated in different languages to fill up most of the space. 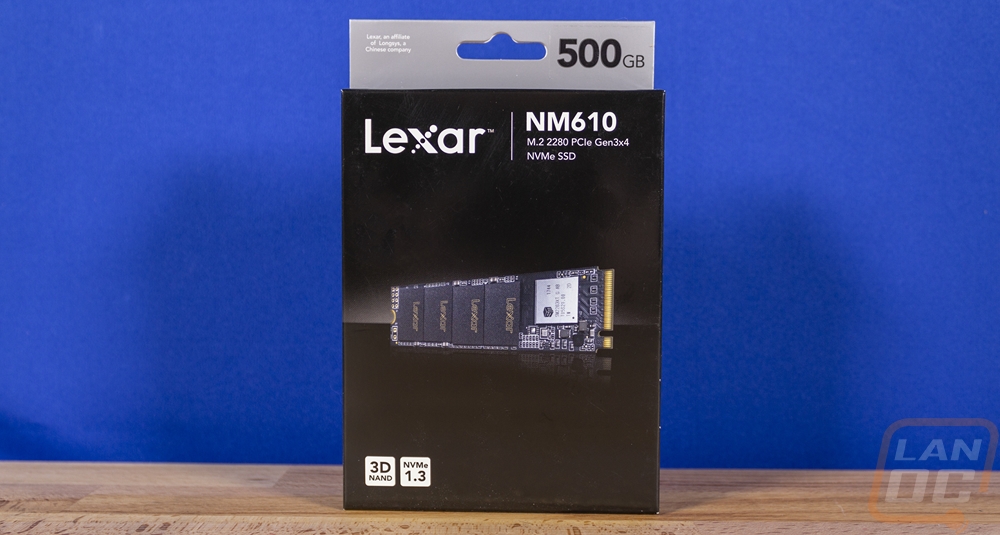 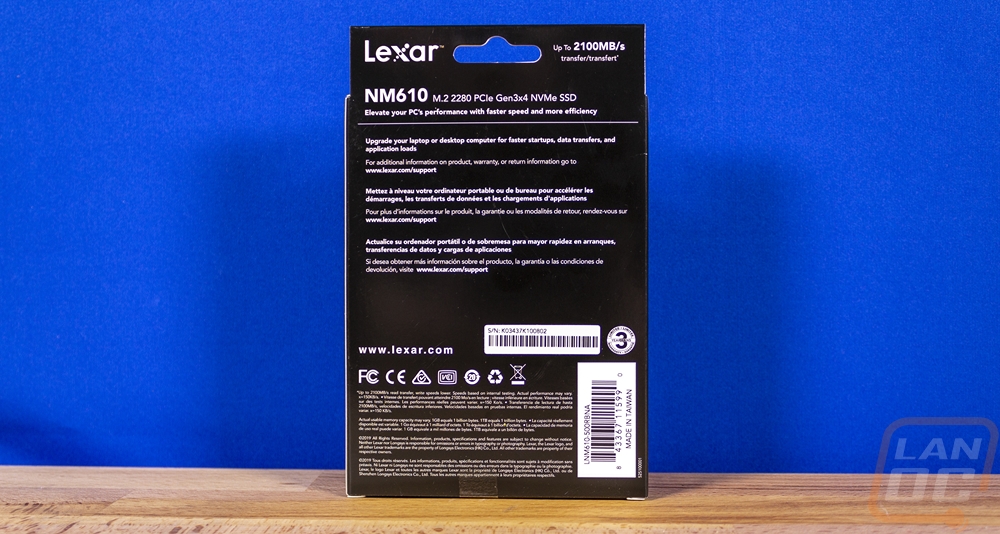 Inside the box is a clear plastic clam-shell tray that locks the drive in place in the center to keep it safe. Beyond that, you get a small folded up paper with the warranty and safety information on it and a quick installation guide. 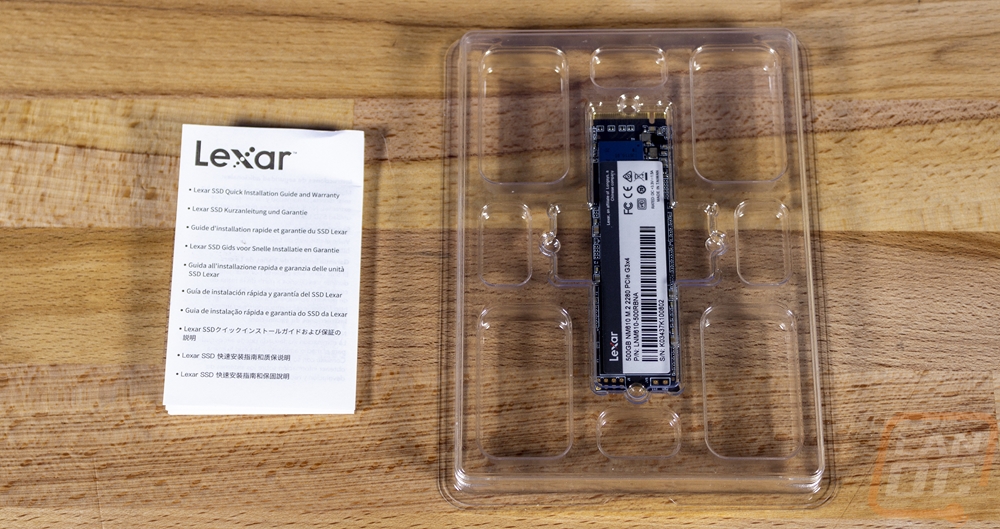 Lexar doesn’t have a flashy gaming focus or even themed brands like WD to color-code their drives. So the NM610 is simple and to the point, just like a Lexar SD card. One side of the drive has a sticker on it and the bottom 2/3 of that sticker is white with a grey/black strip at the top with the Lexar branding on it. The white area has all of the normal stuff like the certification required branding and a part number and serial number including a barcode for the serial. Above that, they do have the drive capacity listed along with the full model name which includes the drive length and that it is a PCIe G3 x4 drive. They make it easy to see exactly what you are working with which should be nice in the future. There isn’t anything like decoding a long product model name trying to figure out a drive's size or to see if it is compatible with your hardware. 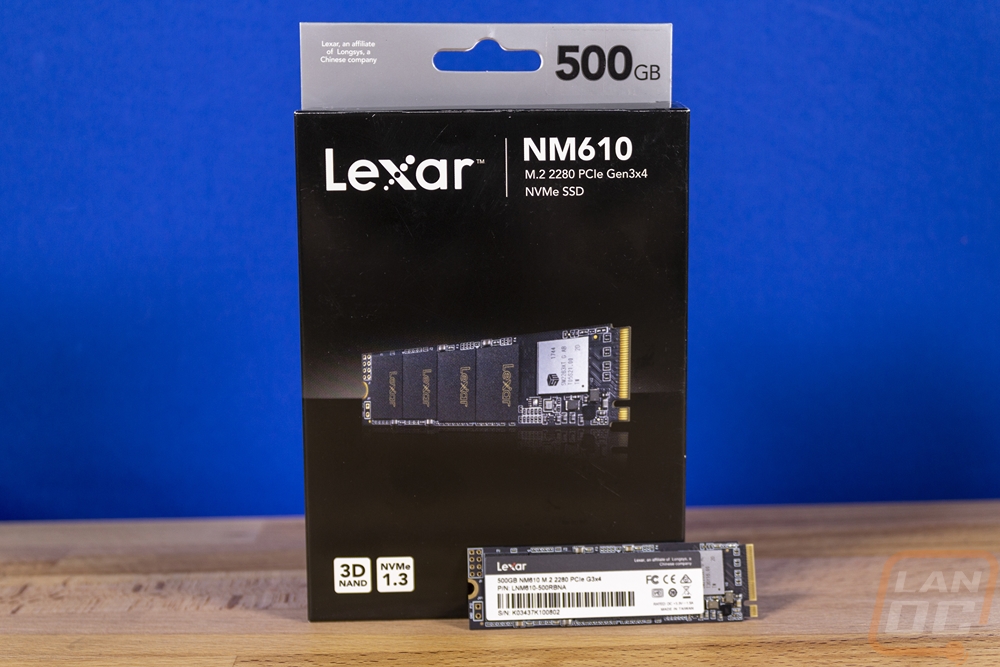 The NM610 is one-sided, so the backside of the drive is pure PCB with just a few unused contacts on the back. It does show off that nice flat black PCB color at least. But with the sticker on the other side covering everything and this being on the back and hidden when installed you don’t see it much.

The top side of the NM610 is where all of the action is. With the branding sticker pulled off, we can get a better idea of what Lexar has going on. There are four NAND with N1TTE1B1FEB1 on them and 01951 below that. These are Micron 64L 3D NAND and are TLC. TLC does have a lower lifespan. The NM610 has an MTBF of 1,500,000 which is a touch behind the 1.7 million of the WD Blue but about what you would expect. As for the TBW it depends on the drive capacity, here is the breakdown - 250GB: 125TB, 500GB: 250TB, 1TB: 500TB. Going up to the 1TB from our 500GB model doubles the write count. I am surprised that the drive has 4 NAND chips when a lot os similar drives have been going with higher capacity NAND and fewer chips. The breakdown on our 500GB drive would then be four 128 GB NAND, with the extra three GB on each being overhead for future wear. Having more NAND does mean that they are closer to the controller which can be more heat.

Over on the right side of the drive, near the M.2 connection, the silver chip is the controller. This is the Silicon Motion SM2263XT which is the same controller you will find on drives like the Mushkin Helix-L. It is a DRAM-Less controller which is why we don’t also see any DDR3/4 on the SSD. Going DRAM-less is to keep the cost down and it moves the HMB from on the drive to your system memory. The HMB btw is the Host Memory Buffer which tells your system which is basically a map of where everything on the SSD is located. 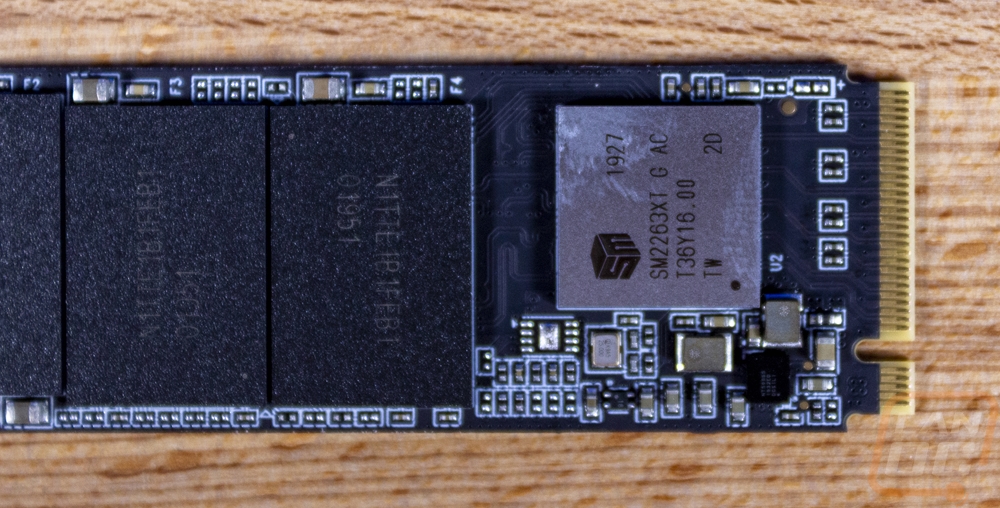 Before diving into testing I did check out the drive with CrystalDiskInfo to confirm the firmware on the drive and to make sure it was connecting at that PCIe 3.0x4 as promised. As you can see below everything was good. 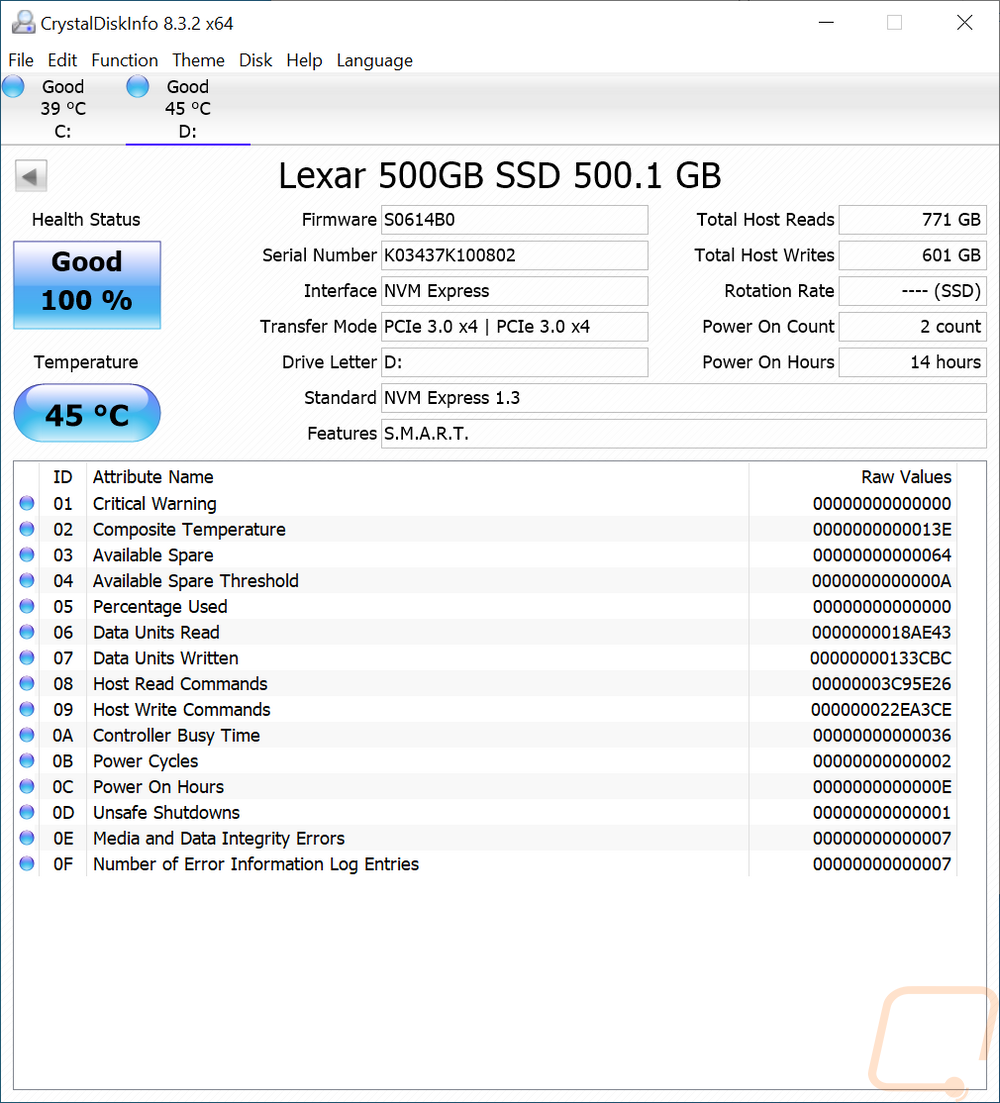 Getting into the testing I ran CrystalDiskMark which is always a favorite because it gets right to the point, especially with the sequential read and write speeds that companies like to promote. I) tested using CDM6 and 7 because they have changed the testing. Lexar has the NM610 listed with up to 2100 MB/s read and 1600 MB/s writes for our 500 GB model and you can see that was spot on for both with the write speeds being higher than advertised. This was a little lower than the WD Blue SN550 that I think is the closest competitor out of the drives tested along with the P1 which was right with the NM610. 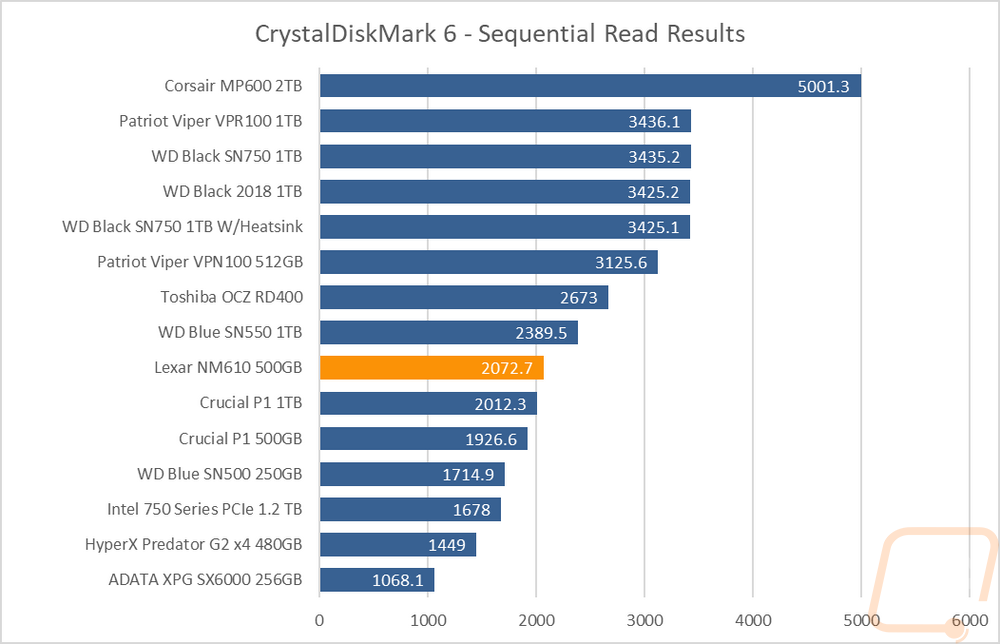 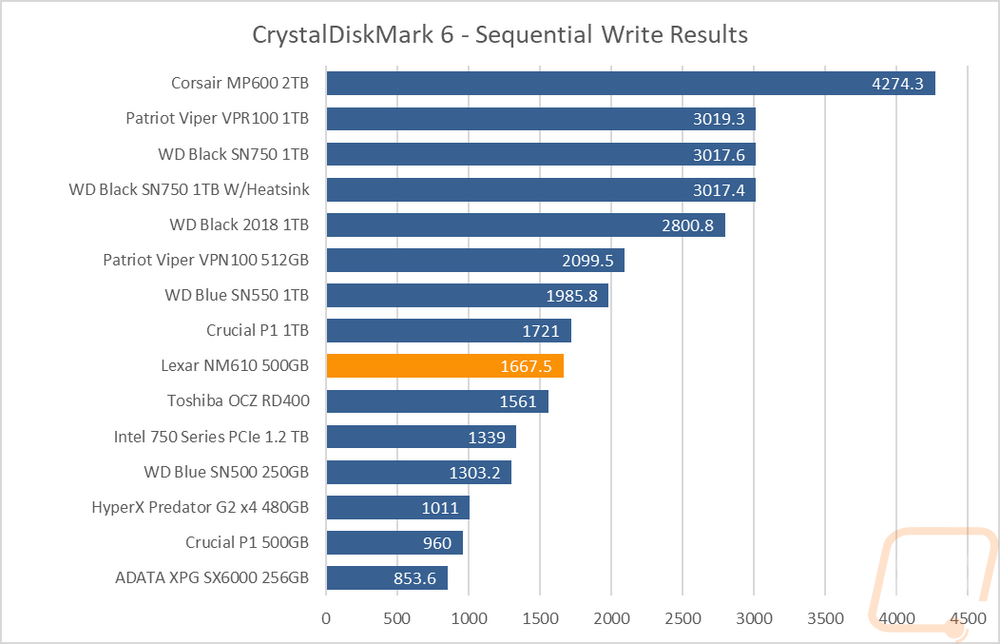 Also while in CrystalDiskMark 6 I also took a look at the IOPS, focusing on the 8 queue depth and 8 thread results. For this, I stacked the read and write results together to get an overall picture of the IOPS performance. The NM610 was really consistent between the two, both being in the 225K/226K range which was faster than the WD Blue SN500 but the SN550 was quicker. 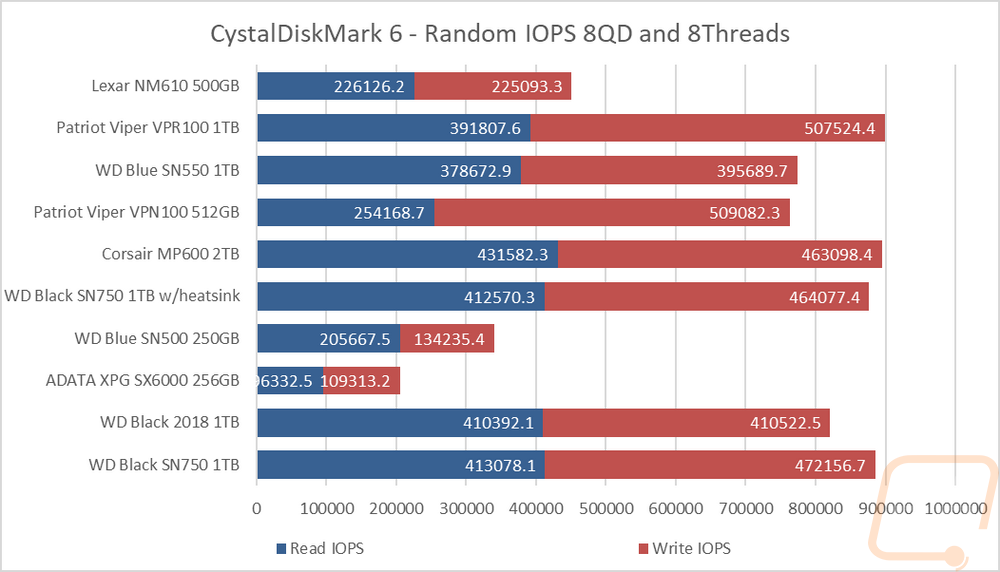 In PCMark 10 however, the NM610 outperformed WD Blue SN550 in the data drive benchmark but came in just behind in the full system drive benchmark. You can see where the Viper VPR100 which is a higher-end drive still outperforms both.

In AS SSD, rather than rerun basically the same tests from CrystalDiskMark I used their timed copy test which transfers three different file types and times how long they take. This is in a lot of ways a lot more like what you would see in the real world. A lower time is better obviously and overall the NM610 didn’t do too bad here. Especially compared to the Crucial P1 drives and the overall total came in a little below the SN550 as well due to faster ISO and game file speeds. 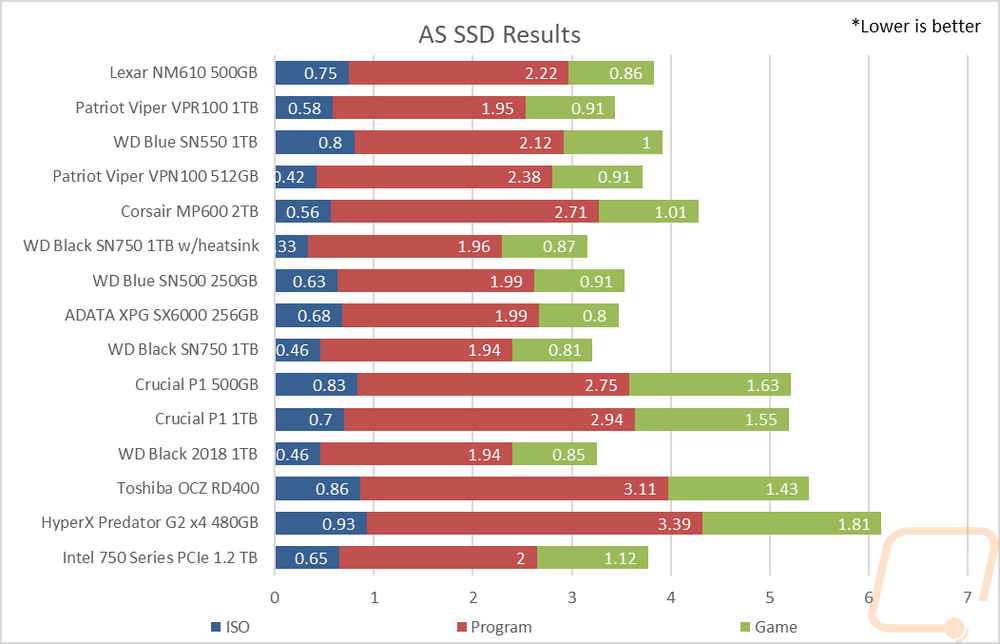 In Passmark Performance Test 9 I ran a few different tests. I used the advanced disk benchmark to run a few of the default test configurations which are all focused on enterprise usage. The NM610 didn’t do well in those tests, especially the File Server test which it completely fell on its face with a result of only 3.44 MB/s. The other benchmark I ran was the Disk Mark where Passmark compiles a series of results for an overall score. It came in a hair below the Crucial P1. 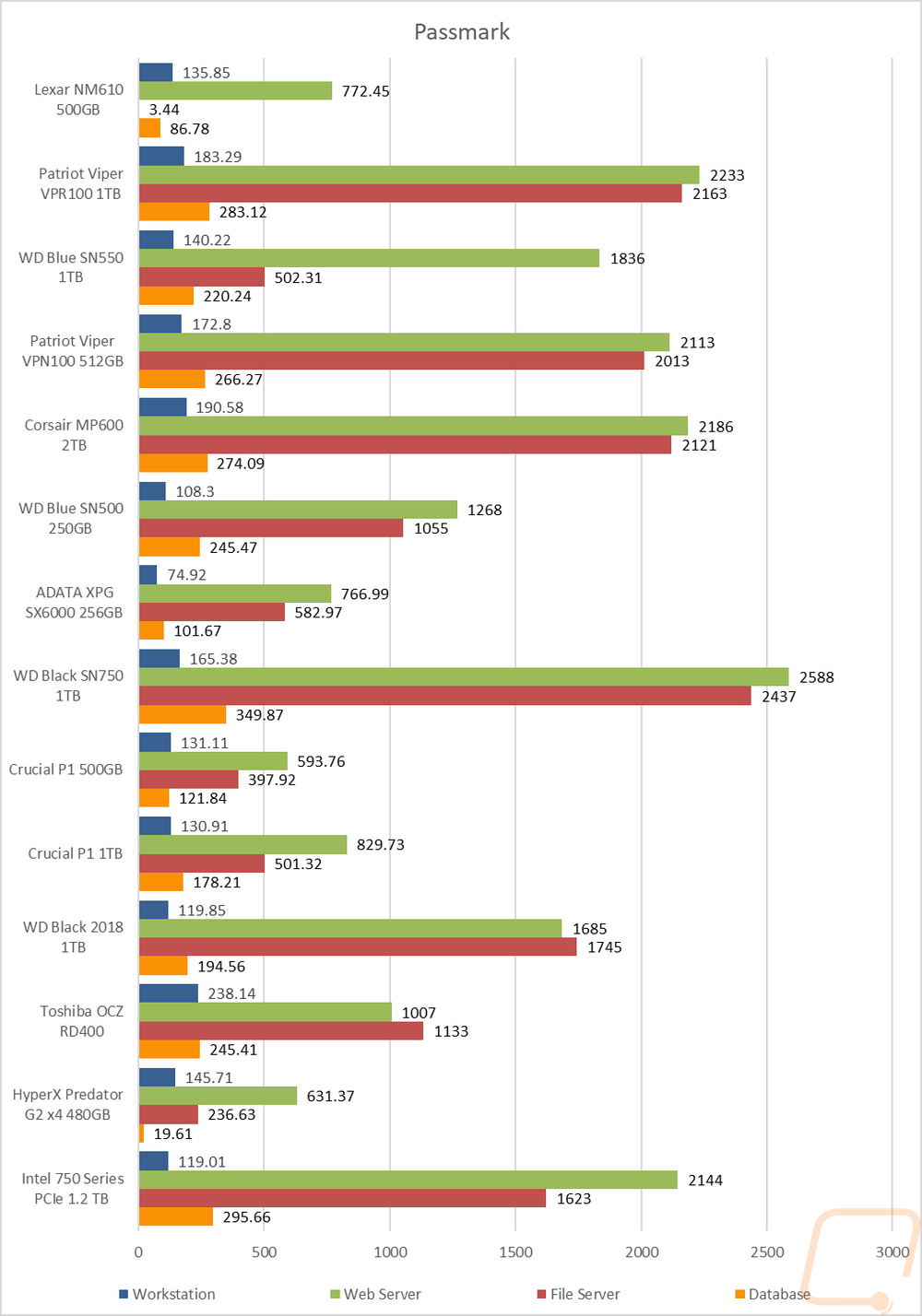 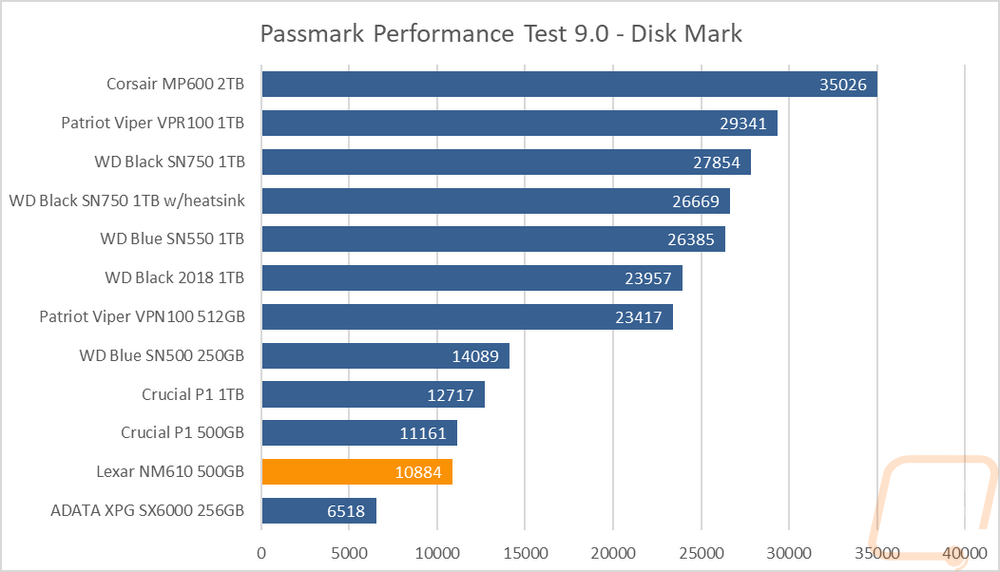 In Anvil’s Storage Utilities I once again took a look at IOPS, this time Random IOPS with both read and write set to a queue depth of 16. The read IOPS were a little faster than the write IOPS this time around on the NM610 but the combined total was still behind the SN550 by a good amount but ahead of the 500GB Crucial P1. The P1 did have better read IOPS but was much lower on the writ IOPS. 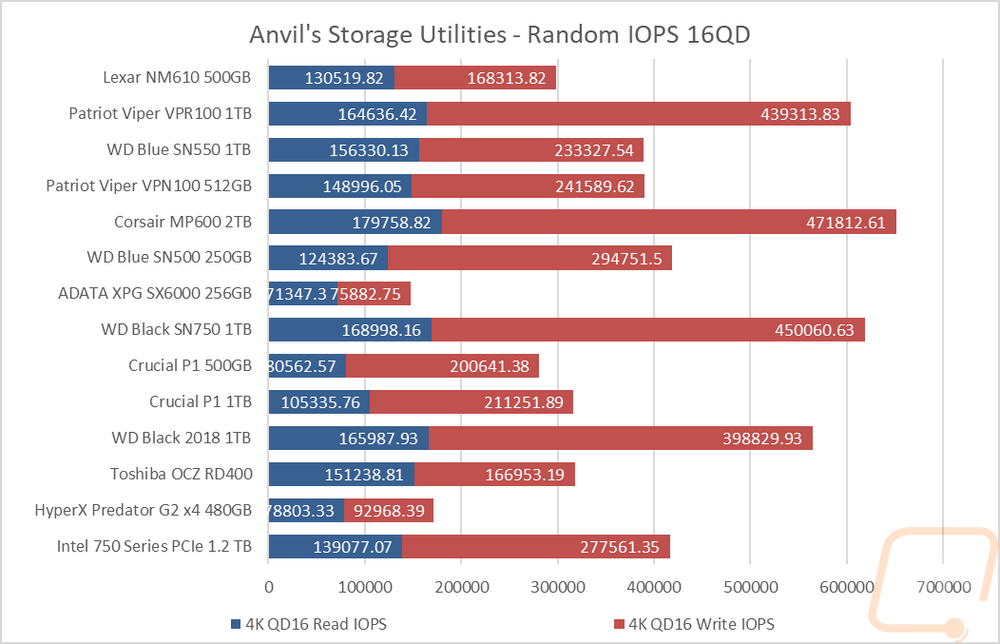 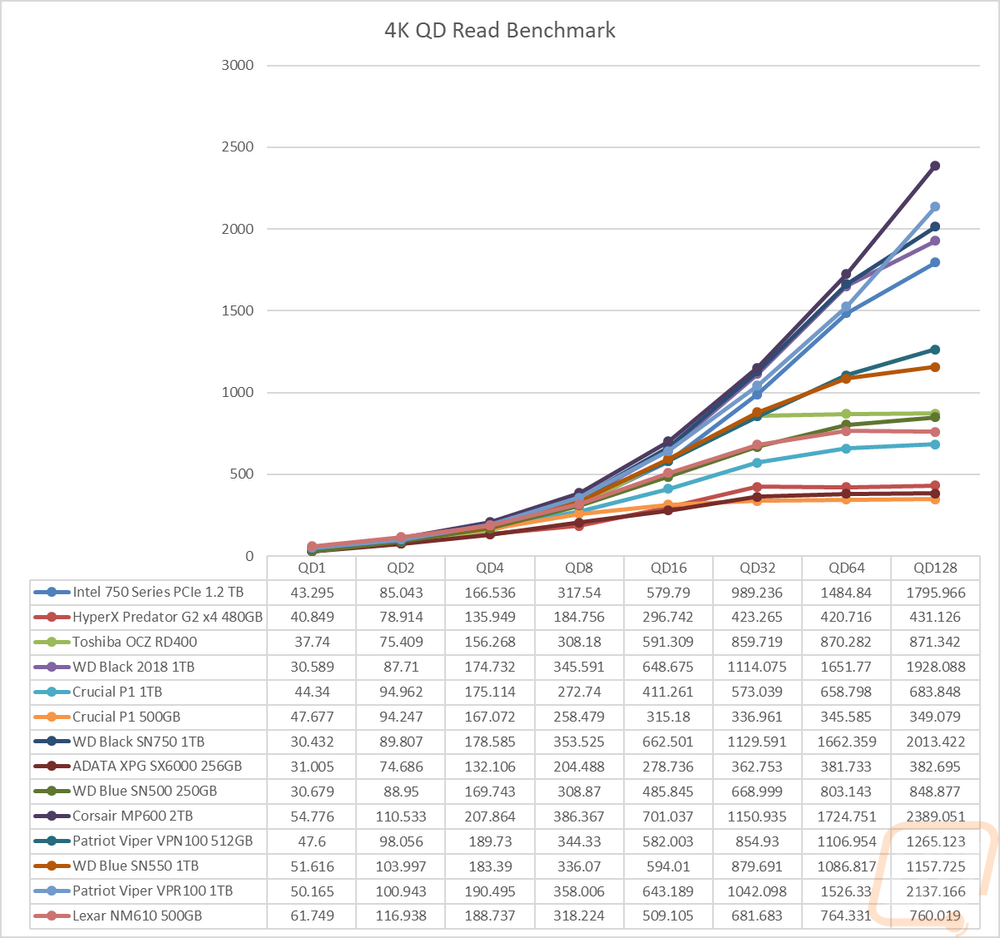 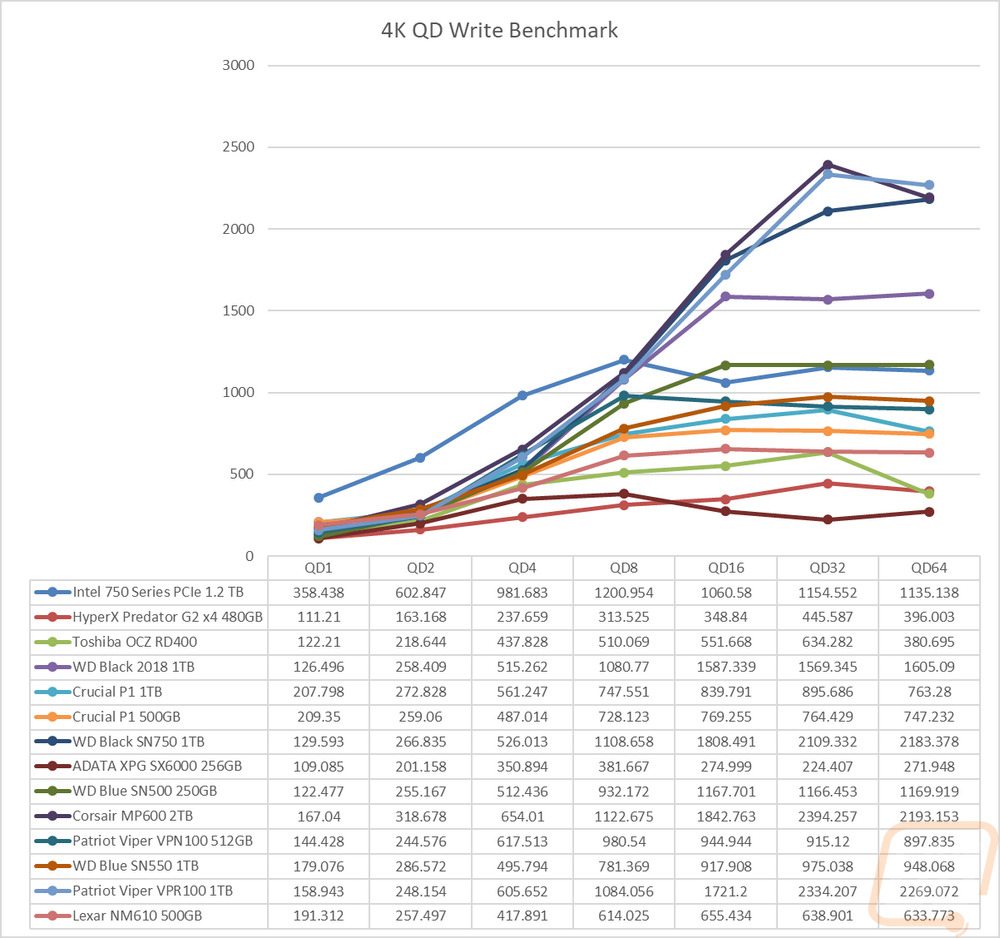 The SSD market is especially competitive and it is always changing because other than the top end it is all about the price to performance. So small price changes make all of the difference. The NM610 isn’t aiming for the high end, though being an M.2 NVMe drive it is by default a faster drive than most. I found that in my testing it best compared with the Crucial P1 and Western Digital Blue SN500, the newer SN550 is a touch faster. The SN610 is a DRAM-Less design that nearly all of the drives its price range are as well and it uses TLC NAND which while I consider it a downside given that TLC NAND does have a short lifespan, it does fit right with the other drives as well. Performance was a mixed bag, overall like I said it Ran with the P1 and the SN500 though I do think If I had a smaller 500 GB SN550 it may run with it on most tests. Performance is about half of what you can see with new high-end PCIe 4.0 drives but would be a huge improvement over any SATA based drive or any non-NVMe drive in general. There were a few situations where the performance fell off, namely when I tested using Passmark Performance Test 9’s advanced disk benchmark where the drive was noticeably slower than the other drives. It also didn’t do well when I ramped up the queue depth but it was the fastest drive tested in the low queue depth tests.

So being a mid-range NVME drive, like I said before the pricing is extremely important. As of writing this (and this stuff changes often) the Lexar NM610 is selling for $69.99 on Newegg. The Crucial P1 sells for the same price and the NM610 is a little faster. The WD Blue SN500 is the same price as well and the SN550 is $8 more. Given that both of our WD Blue drives were the higher capacity 1TB models when tested and higher capacities perform a little better. I actually think the NM610 ends up being a good performing option at the $69.99 price point. Lexar did a great job of pricing this perfectly. The NM610 isn’t for your high end builds, but for a more budget-focused build, this is perfect to get an NVMe drive at a good price. The 1TB NM610 looks to be an even better value at $115 as well, priced below the P1 and the WD Blue drives and you also get twice the TBW (TB written) for drive longevity. 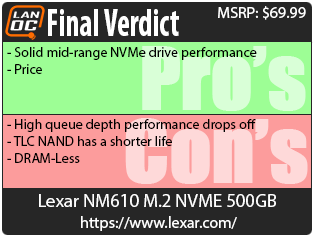 You might call him obsessed or just a hardcore geek. Wes's obsession with gaming hardware and gadgets isn't anything new, he could be found taking things apart even as a child. When not poking around in PC's he can be found playing League of Legends, Awesomenauts, or Civilization 5 or watching a wide variety of TV shows and Movies. A car guy at heart, the same things that draw him into tweaking cars apply when building good looking fast computers. If you are interested in writing for Wes here at LanOC you can reach out to him directly using our contact form.
Discuss this article
Log in to comment
Posts in discussion: Lexar NM610 M.2 NVME 500GB