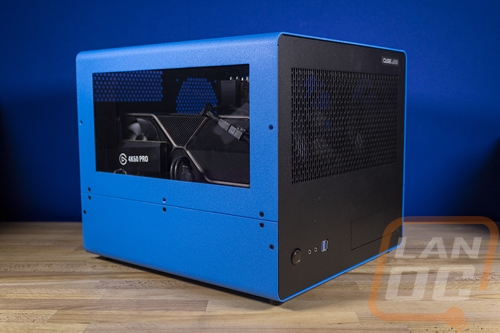 Well, the first item on my list of issues were the storage issues. The main one here is the noise that the 10TB hard drive has been making for at least a year. But once I started looking into things, looking at the numbers on CrystalDiskInfo I was also surprised at the number of hours that the SSD and the hard drive had on them. Not to mention the Intel 750 Series drive that died in this system long ago that I never replaced. So addressing the ticking time bomb that is the noisy hard drive was first, but while I’m in the system I did also want to replace the SSDs as well.

For that I reached out to Western Digital which sent over a WD Black 6TB hard drive, this was a downgrade in capacity but the reality is the 10TB drive is way WAY overkill for how I use the storage in the first place. I use my spinning storage to allow me the room to never have to worry about what games I have installed. I just install anything I’m going to play and leave it there ready to go for the next time I play. I don’t store photos, videos, or any other important data on my PC. Especially long term. All of that is kept on our network on our NAS where I can have redundancy and it is easier to access from all PCs on the network. 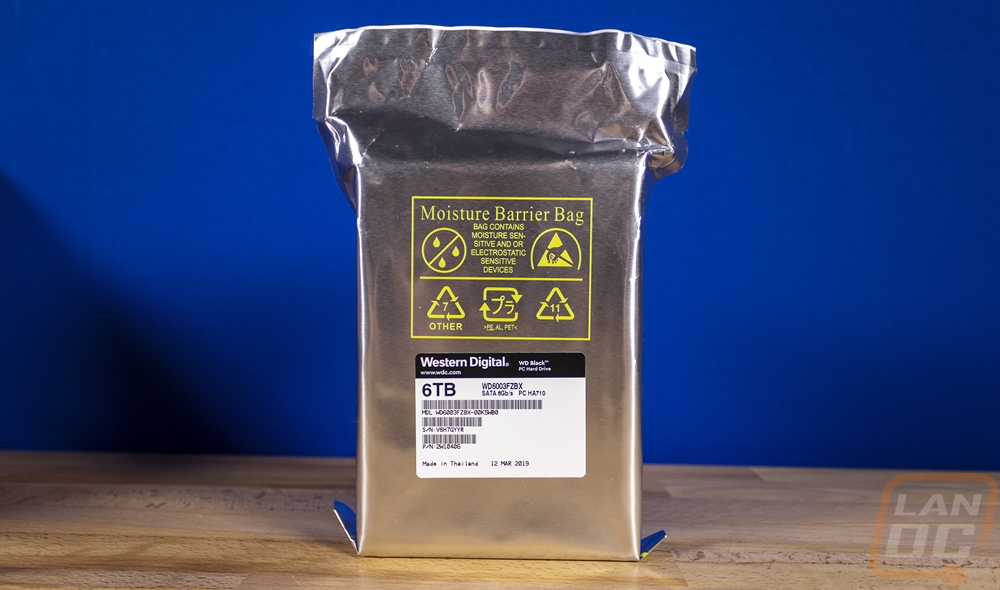 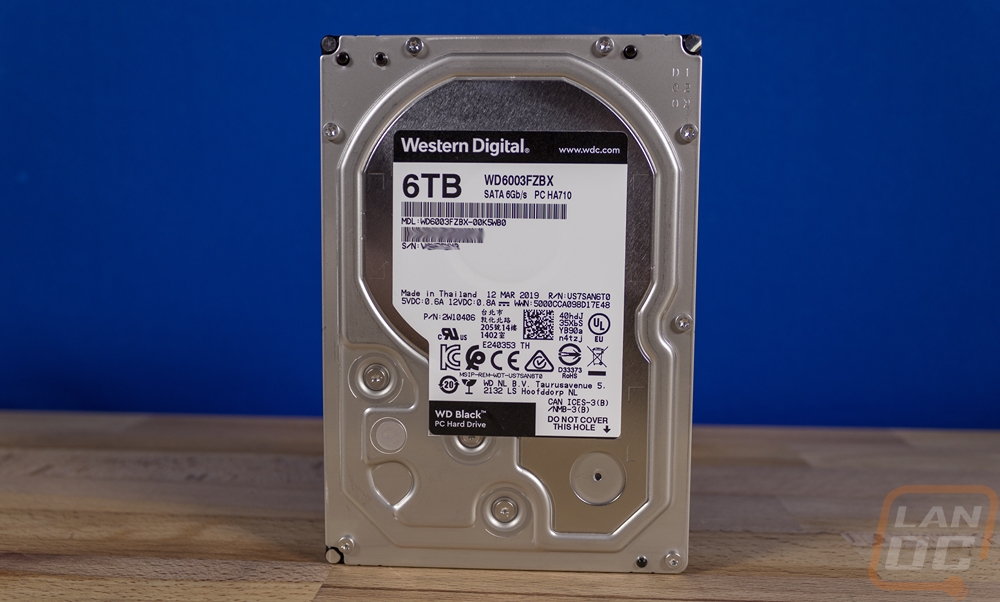 They didn’t include SSDs this time around, but Western Digital has sent drives over for testing in the past and I just happened to have two matching SN750’s with the EK designed heatsinks which look amazing. The SN750 fit the bill for what I needed perfectly because the drives are fast, the run cool with the heatsink on them (which in the past I had added heatsinks to our RD400 because it ran hot), and they have a TBW of 600TB with our 1TB capacity. The extra room that a 1TB drive offers isn’t bad as well! The second drive is adding back in a fast storage drive that I can use as a scratch drive when editing videos and photos to speed things up and a place where I can install games that I play more often or that extra speed will help like Microsoft Flight Sim 2020. 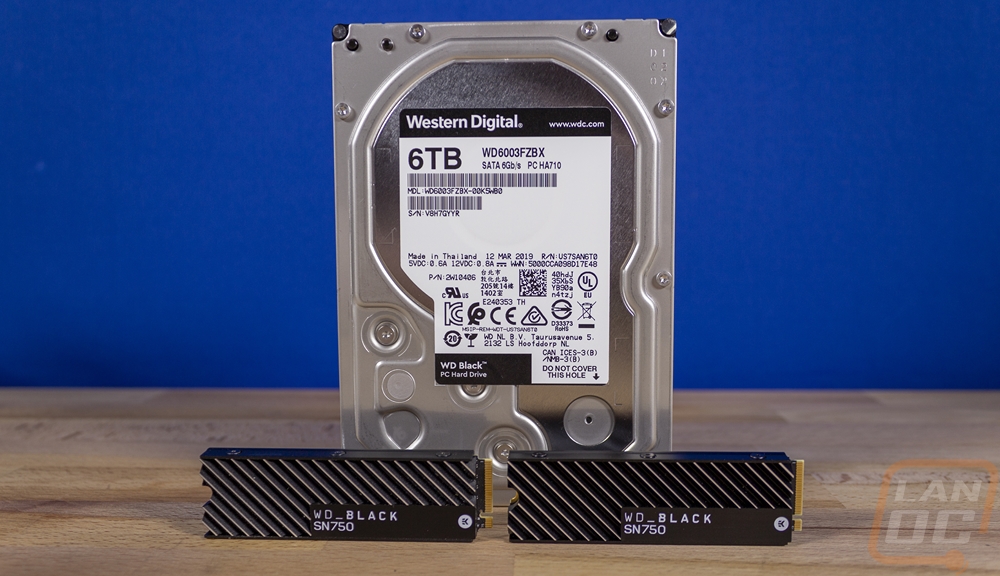 So with a plan figured out I finally pulled the system out of its small cubby in my office to swap things out. Before doing that I took this as a chance to clean things out a little better than normal with our DataVac. Then I installed the first of the two SN750’s. This drive, being the OS drive needed to have the old SSD cloned over to it before I would have room to install the second SSD. For this, I used Macrium Reflect 7 which can be used for free. Cloning using Macrium is quick and easy, you pick the drive you are pulling from then the drive it is going to. Once I was done, I did have to expand the partition size out to use the full 1TB. A clean installation would be the better way to go about this given the issues I have had. But with a motherboard/CPU upgrade potentially in the future, I’m going to wait until after that to start fresh. Especially with how disrupting that can be. 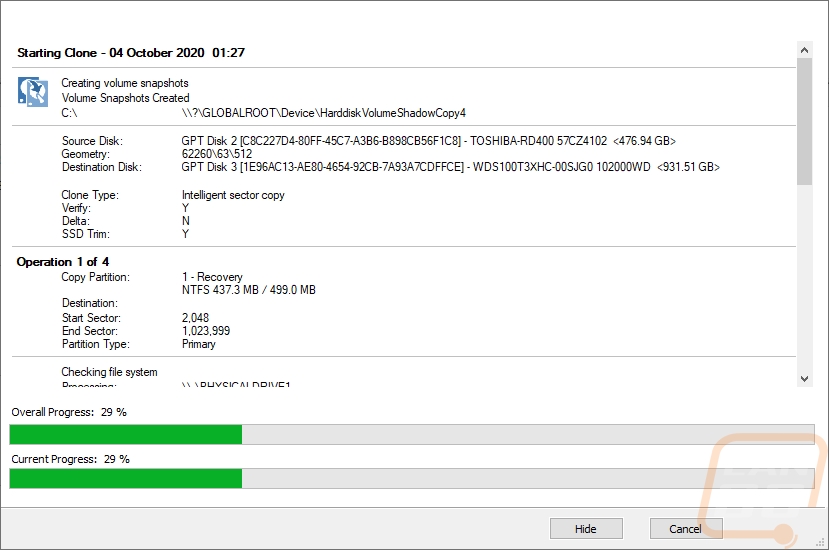 Once the clone was done, I could take the system back down and install our second SSD. Asus makes this very easy with their DIMM.2 system which is a riser card with M.2 mounts on both sides. The Zenith Extreme motherboard does have traditional M.2 locations as well, but those are up under the PCIe cards which add a lot of unneeded heat on to the M.2 drive. Not to mention being on a riser like this, the SN750’s get airflow on their heatsinks. 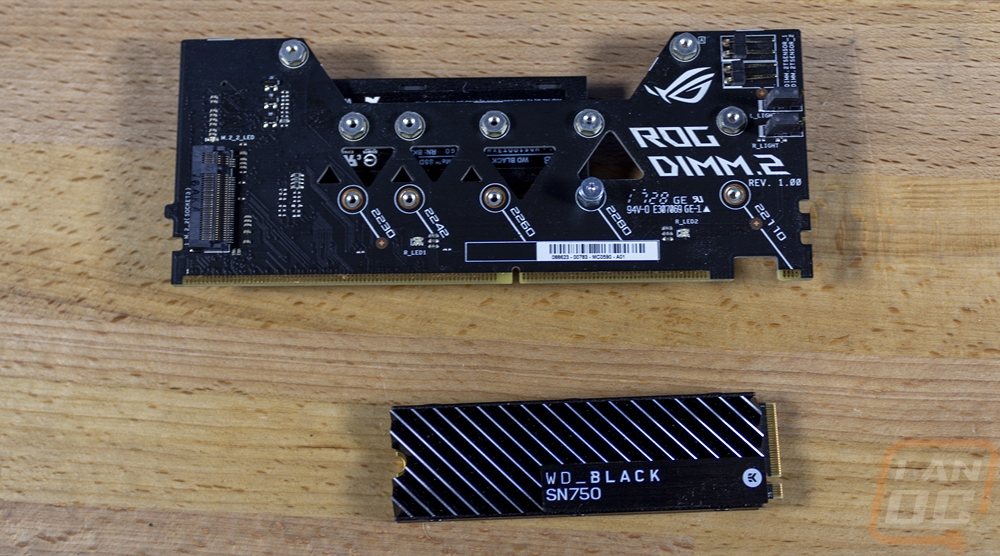 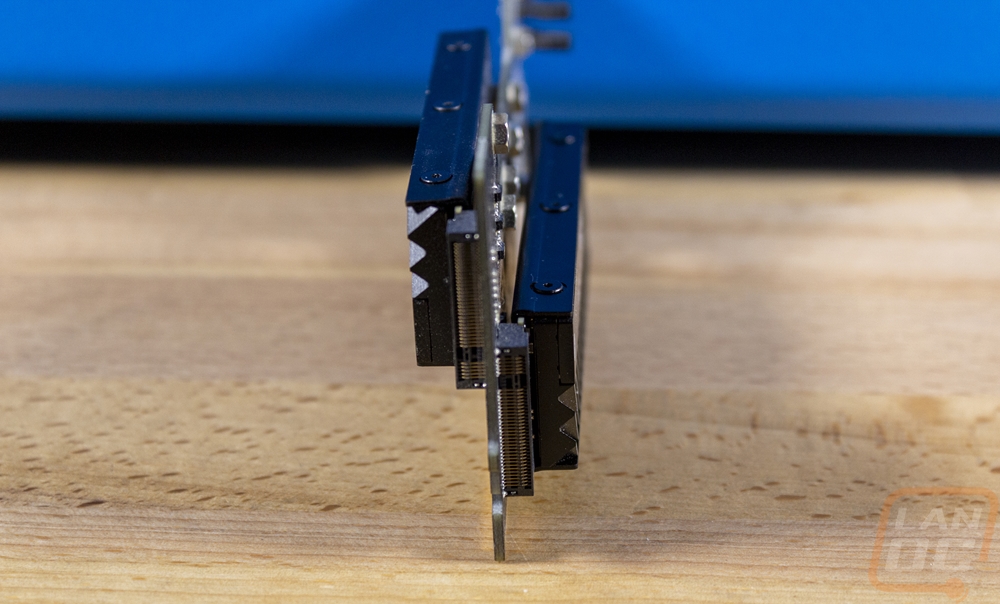 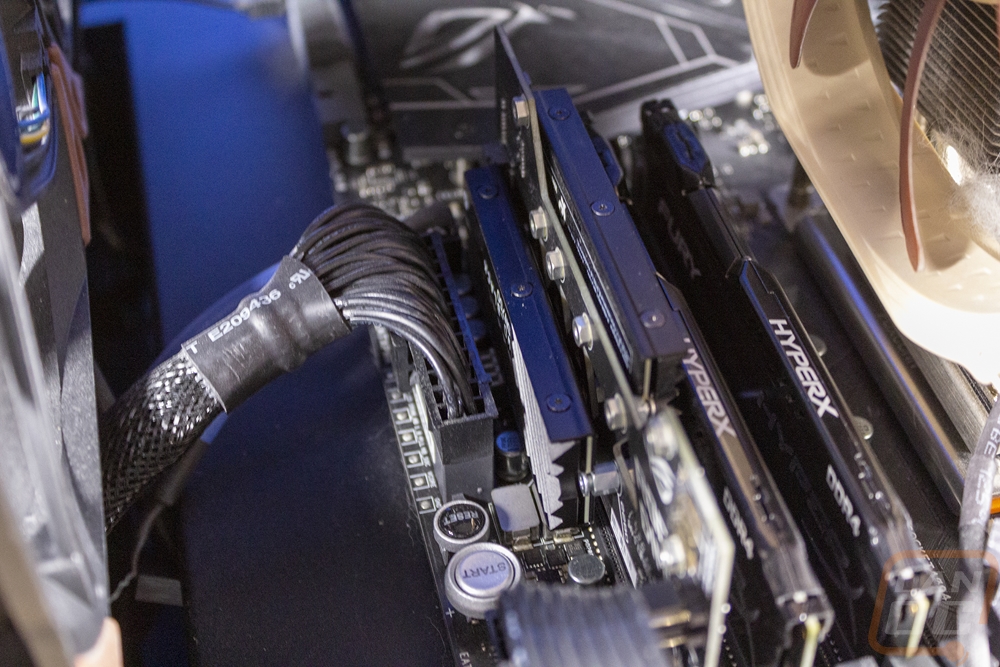 Next, I needed to install the WD Black 6TB drive. The Case Labs BH8 makes this easy with the drive mount being installed on a removable panel on the bottom of the case. The drives have rubber mounts, but I did spot a little surprise. The Seagate 10TB that has been making all of the noise has clearly been getting extremely hot as three of the four rubber mounts had burnt onto the side of the drive slightly. This tells me that when I get into the cooling changes and that I need to look at the airflow in the bottom half of this case. Well, if I want the new hard drive to last at least. I did cheat a little here because I know I’m diving back in later I installed our new drive but also kept the old drive installed so I could transfer the data over. 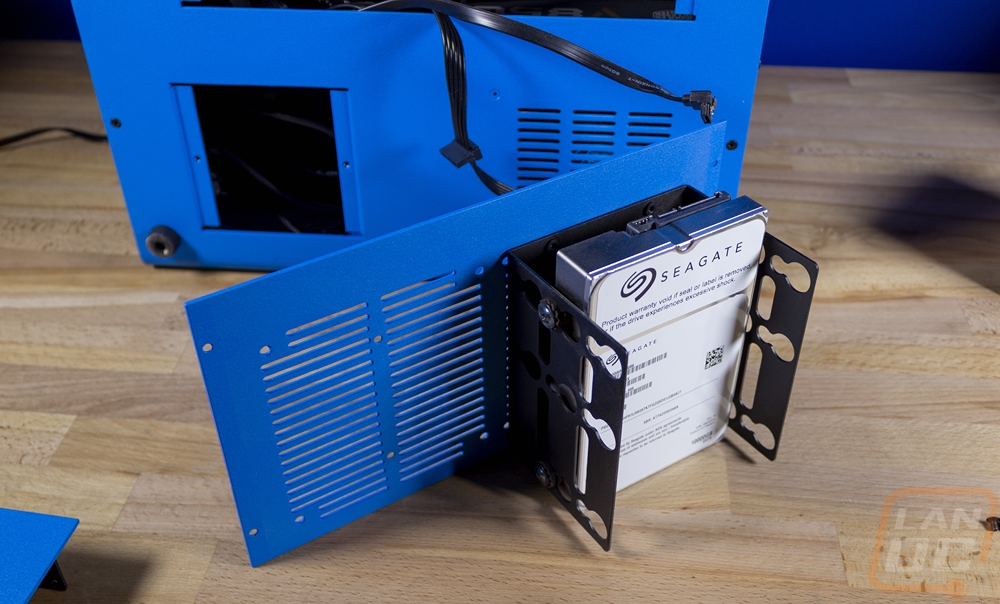 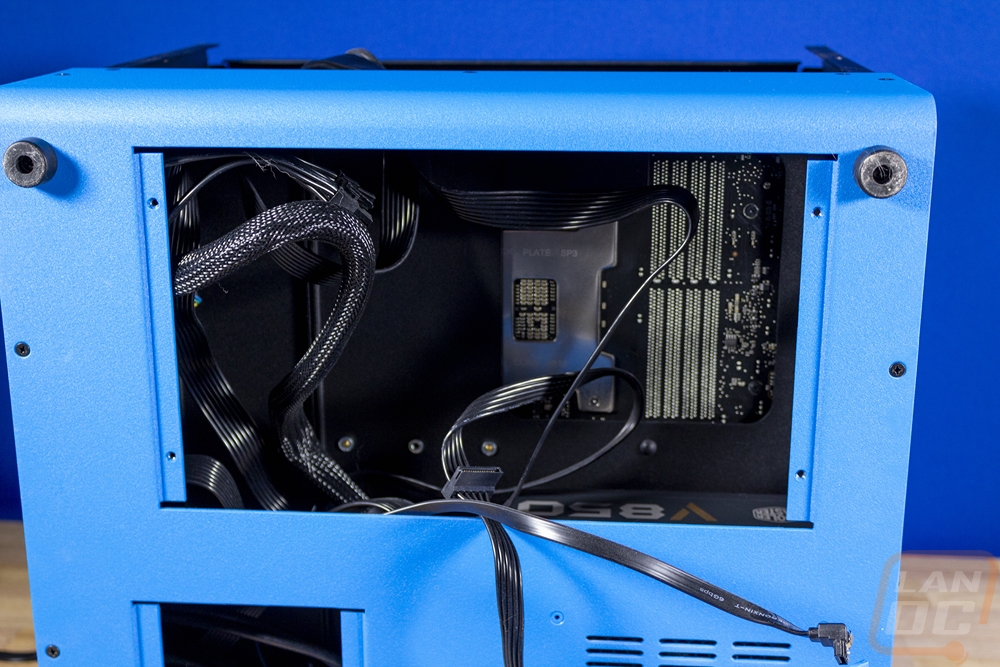 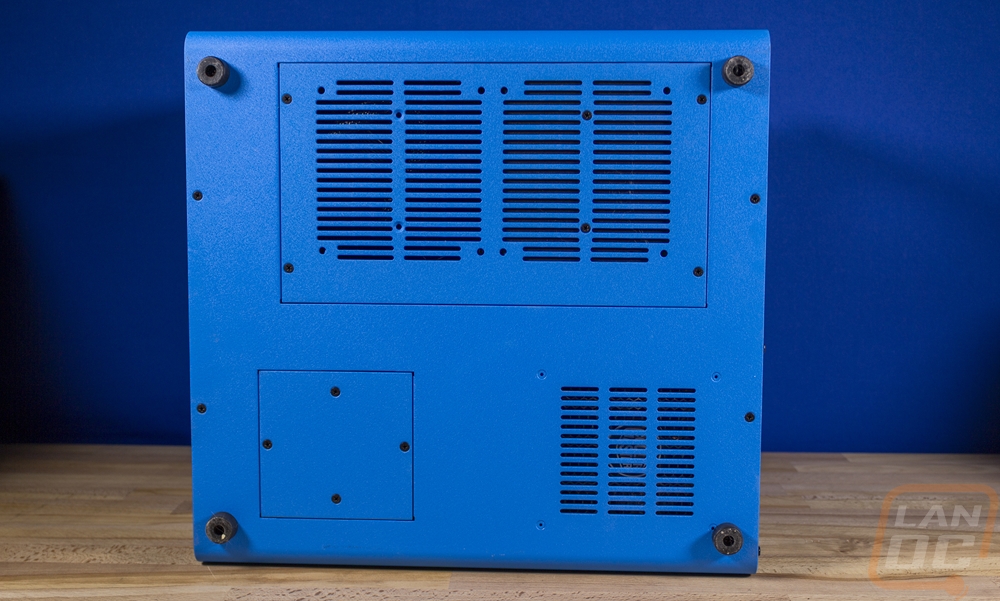 Speaking of transferring the data, this was a nightmare which given the condition of the 10TB drive it isn’t a huge surprise. For one, copying data from a spinning disk takes a LOT longer than from SSD to SSD like I did for the OS drive. But on top of that, there is also a lot more data to move. I initially tried to do the clone, but because the drive was going back the clone failed twice 5+ hours in. From there I needed to manually move things. Frankly, I would have been better off just looking for anything important and redownloading all of the games because we do have fast internet. But in my stubbornness, I started to manually move things. For steam, I found a tool called Steam Library Manager (LINK) which helps at least automate transferring more than one at a time. But I still had games from my Epic account, GOG, Origin, Rockstar, Uplay, and Battle.net all also on the drive. SLM (Steam Library Manager) does support Uplay and Origin as well so it can help with those. But the rest had to be moved manually which includes moving the files then pointing things to the new location. As it turns out when doing these file transfers some of the network and other issues started to pop up more. I ended up spending days moving things slowly in what in the past was an easy task. 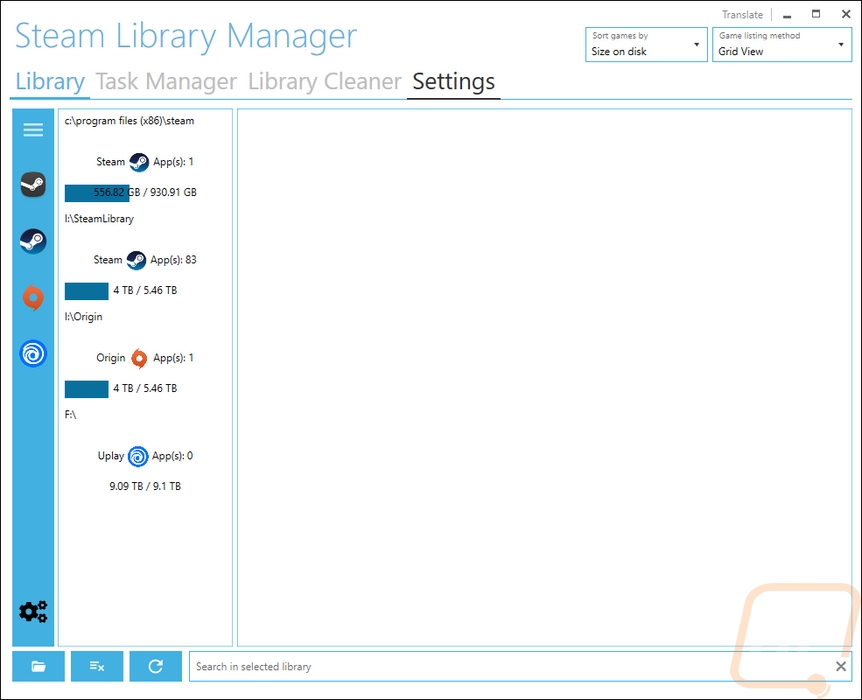 Once transferred, I did run a few speed tests on things. I wasn’t expecting to see any performance improvement going from the old hard drive to the new one, but the WD Black drive was a touch faster on the reads. The old drive’s write performance was horrible as you can see. Jumping from 57.67 MB/s up to 220.82 MB/s should be nice. 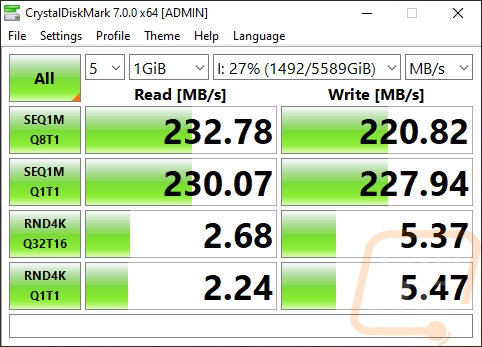 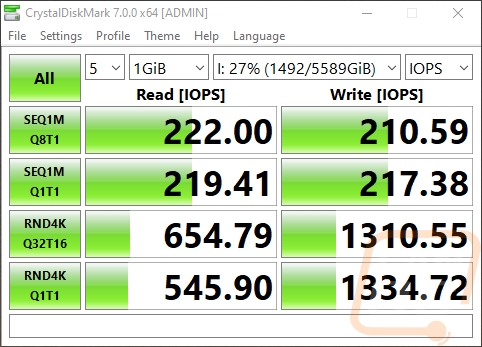 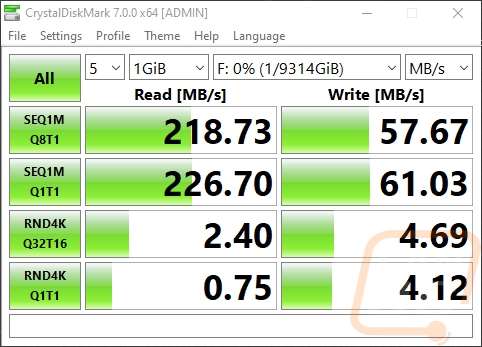 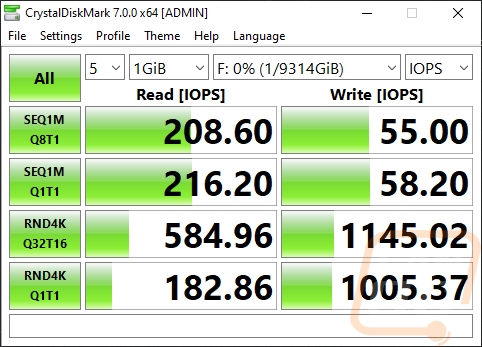 For comparison, I did also test the SN750 to show what the OS drive does, as well as the new fast storage drive. If you haven’t experienced an NVMe drive, just compare what a hard drive does in the tests above to the NVMe SN750. It’s just night and day! 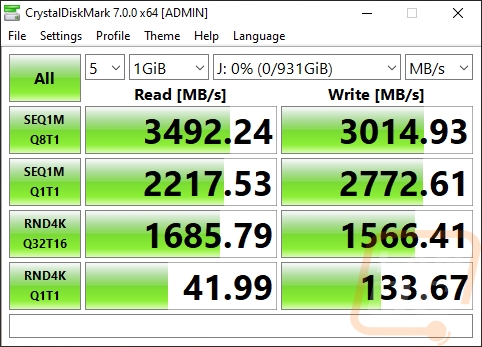 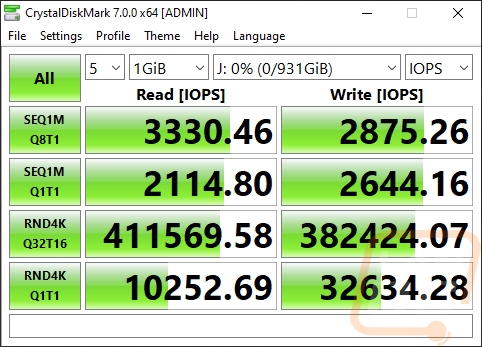 The last thing I wanted to do was get the top of the case installed. I’ve been running it open air for a long time and because of how the build normally sits in a wire rack that just barely fits it I can’t take the cover on and off without unhooking everything and pulling it out. Given the noise issues I have dealt with, I wanted to see how much putting the cover back on could lower noise levels. I also wanted to get a better look at cooling with things buttoned up. That way I would know what I would need for the next upgrades! 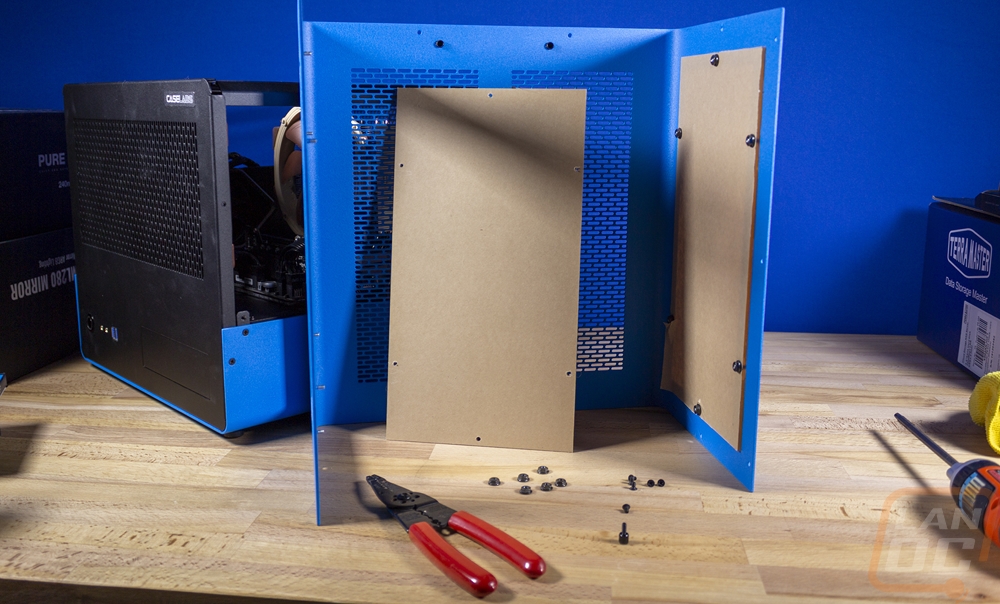 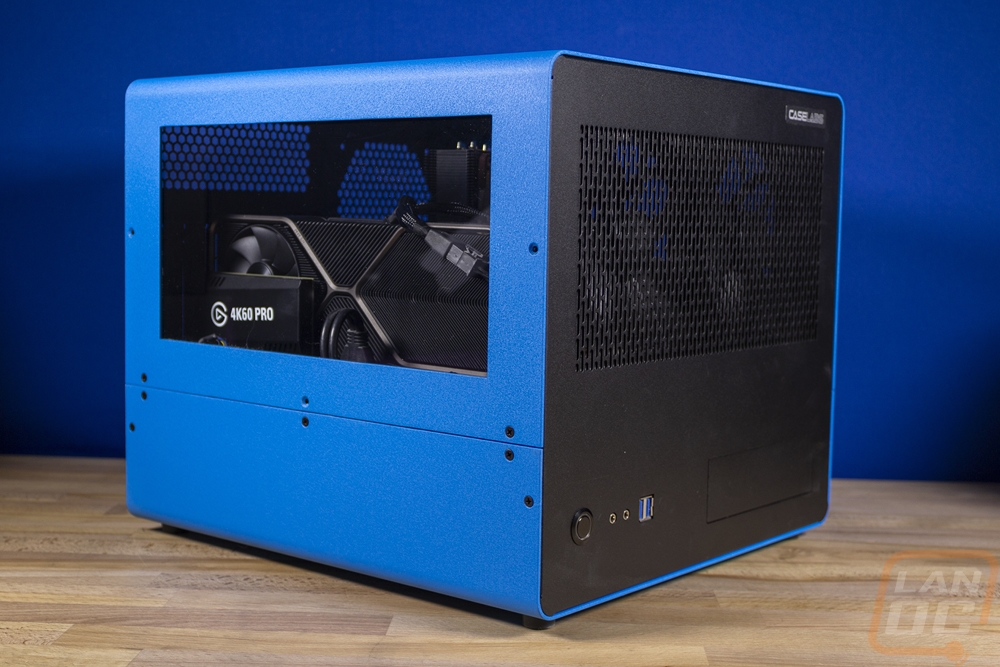 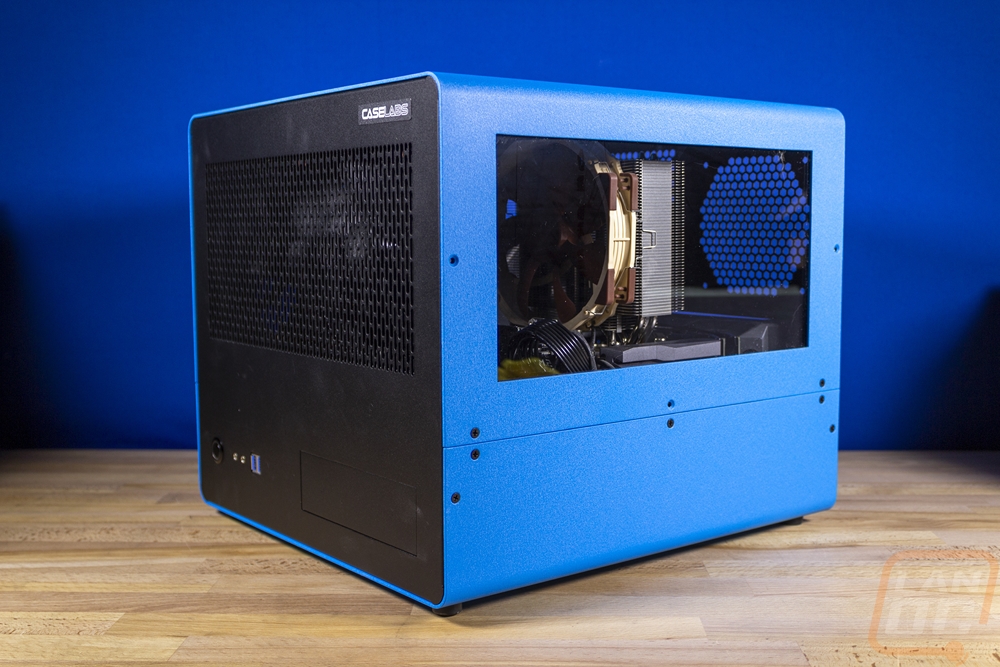 I just have to mention, that I still love the way this case looks and it’s still a huge shame that Case Labs is no longer. The RTX 3080 FE hiding in there looks amazing as well. All that is needed aesthetically is an all black cooler or some form of water cooling to match the blacked out look. But I have a few other things planned and more that I’m working on. So keep an eye for another update on the Crushed build here soon! 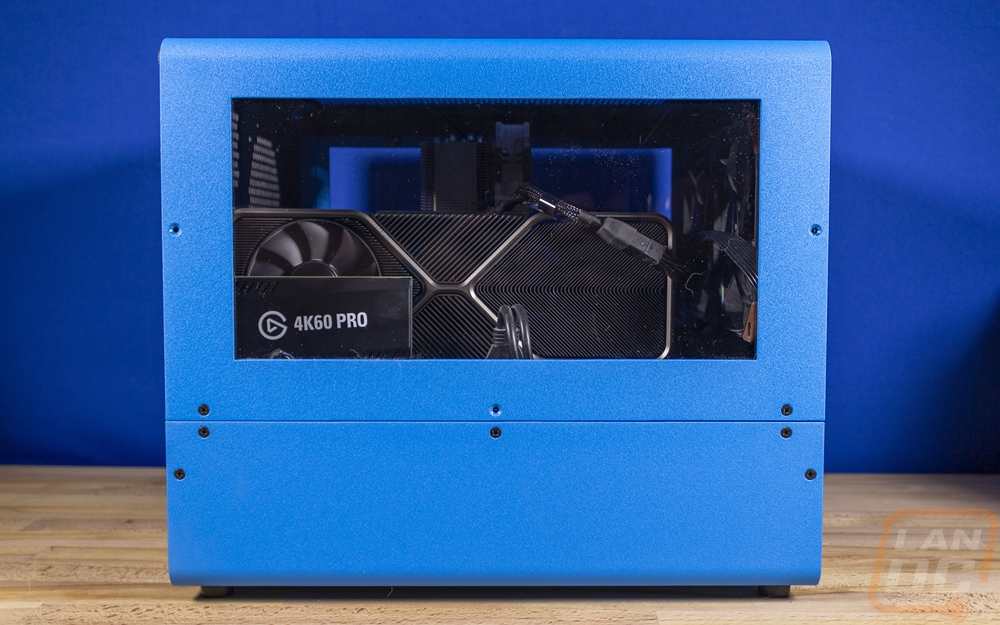 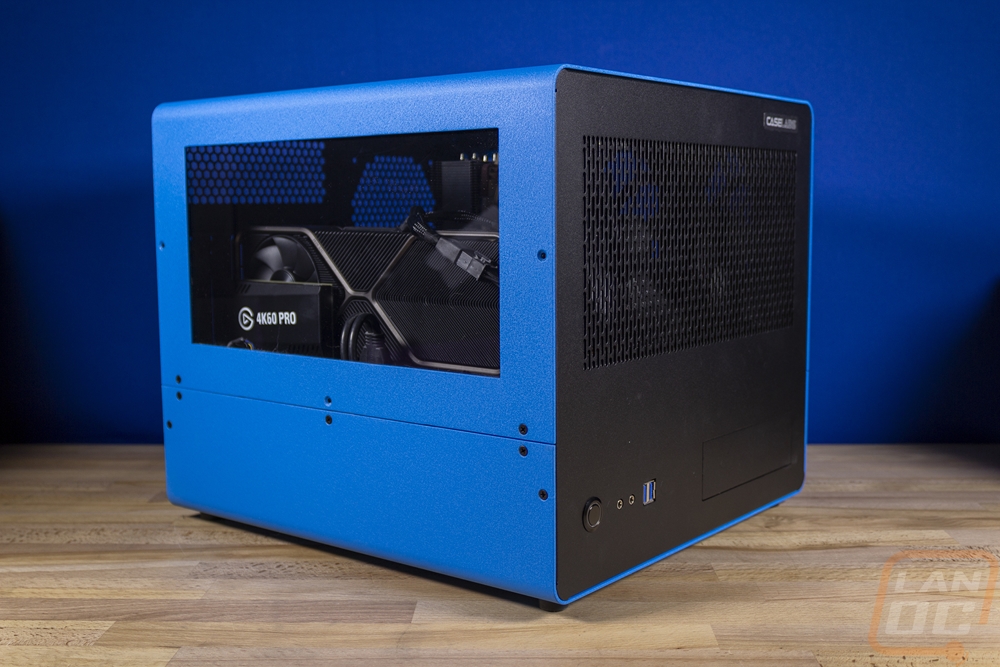 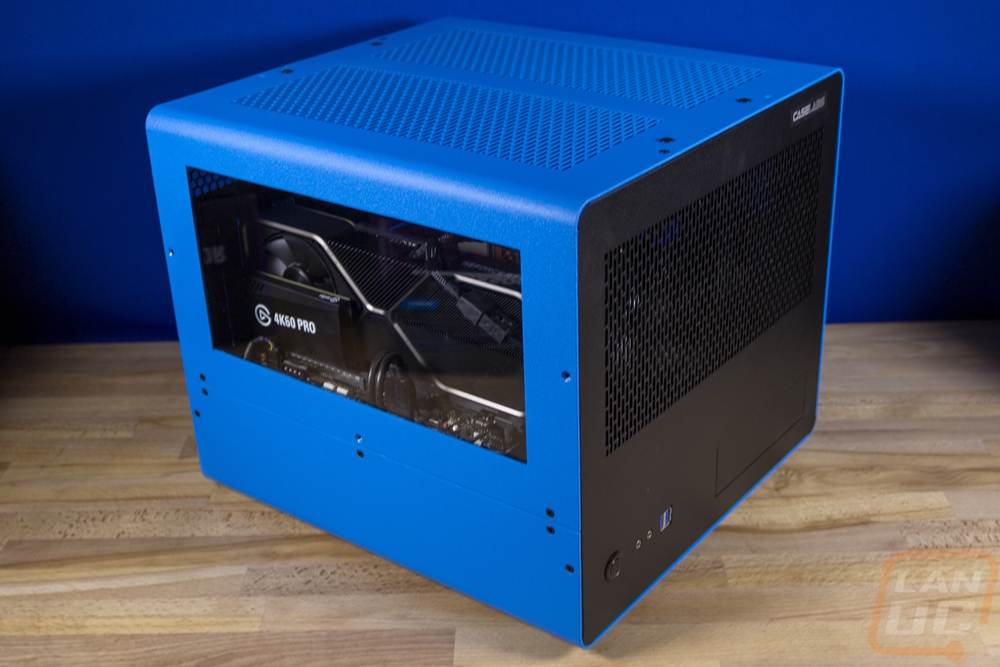 You might call him obsessed or just a hardcore geek. Wes's obsession with gaming hardware and gadgets isn't anything new, he could be found taking things apart even as a child. When not poking around in PC's he can be found playing League of Legends, Awesomenauts, or Civilization 5 or watching a wide variety of TV shows and Movies. A car guy at heart, the same things that draw him into tweaking cars apply when building good looking fast computers. If you are interested in writing for Wes here at LanOC you can reach out to him directly using our contact form.
Discuss this article
Log in to comment
Posts in discussion: Project Build Crushed Update - Part 1

We have 831 guests and one member online