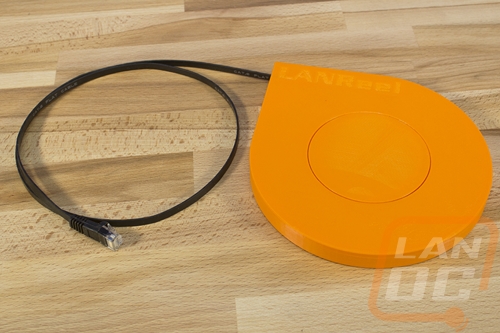 So the LanReel isn’t an overly complicated product so obviously, this isn’t a really long review. It is designed to a simple job and it does that job well. It's not even the first cable reel I’ve ever seen but it is a lot cheaper than what is out there and considering the ethernet cable is also included it makes it a nice setup.

I found that the LanReel was a big improvement over the network cable normally in my LANbag both in setup and cleanup time but also in the amount of space it takes up in my bag. With my old cable packing, it up would have me walking behind everyone at my table while carefully wrapping it all up. With the LanReel I can just unhook the plug at the switch then go back to my PC and reel the cable in and be done. It doesn’t get much easier than that.

As for downsides, there aren’t too many. If you aren’t experienced with 3d printed parts you might be surprised to find that there will be some imperfections, but from what I can see this is actually an easy to print design and Vaelin did a great job printing it (though I think his live z needs a small adjustment :D). So I wouldn’t consider any of that to be an issue. I think the design could be improved if the cable matched the LanReel color or if the switch end of the cable had a small tag on it. At an event, you have to be able to figure out which cable is yours when it is plugged into the switch. I use an orange cable for this, with black it blends in with most everyone elses cables. If you leave early you don’t want to unhook someone in the middle of a tournament or anything.

Beyond that, the only other issue I have with the LanReel is that I now need to get two more. One for my wife’s LANbag and one to replace the loaner cord we always bring with us. I have a feeling if I loaned out a LanReel it is going to be harder to get it back from someone after they try it out. So how much would another cost me? Well, you can currently only get them directly on the PDXLAN forums at THIS link or by reaching out to Nick on FB HERE. One will run you $25 but if you want to have your username included it costs $35. At $25 I think it is priced about right. A flat cord is going to run you about $10 online and the reel itself. Buying a 25 foot cat5e in a big box store is going to cost you nearly the entire $25, in fact, the closest Best Buy to me has two cords, a Cat-5e for $19.99 and a Cat-6 for $24.99. I would take the LanReel any day of the week over those. The $10 for customization seems fair, it does take time to make your logo or name into a vector file and then to add it to the original 3d file. But even just getting to pick from a few colors for the reel itself is enough customization for most. So if you are going to be hitting up a few events this year, I would highly suggest you check out the LanReel. 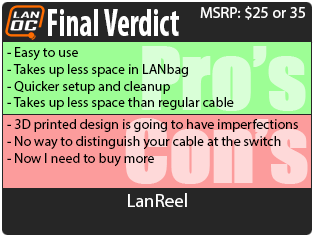 Where to buy: Etsy

You might call him obsessed or just a hardcore geek. Wes's obsession with gaming hardware and gadgets isn't anything new, he could be found taking things apart even as a child. When not poking around in PC's he can be found playing League of Legends, Awesomenauts, or Civilization 5 or watching a wide variety of TV shows and Movies. A car guy at heart, the same things that draw him into tweaking cars apply when building good looking fast computers. If you are interested in writing for Wes here at LanOC you can reach out to him directly using our contact form.
Discuss this article
Log in to comment
Posts in discussion: LanReel