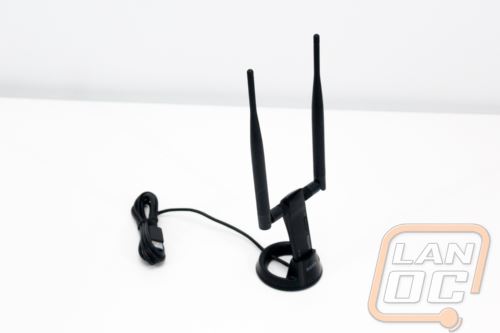 While a lot of us still run wired networks at home, you really can’t avoid running a wireless network in your home or office. There are just to many devices that only use wireless like mobile phones, tablets, portable game consoles, and a lot of today’s thin laptops as well. Hell in our house in addition to the regular devices you will also see a printer, at least one IP security camera, and even our whole house humidifier. This is all of course in a house that is completely wired as well, imagine how many devices you might see on a house that runs completely on wireless. With that the move to wireless AC becomes more and more important. The additional bandwidth it allows on wireless is huge, especially when a lot of households are actually getting faster internet than their wireless can provide to their devices. So today I’m going to take a look at a wireless AC adapter from Netis that allows you to hook up that PC all the way on the top floor to your new AC router or if you want you can even use it to run your own wireless network.

For packaging, Netis packed the AC1200 Wireless Dual Band USB adapter  in a black and blue box. On top is a photo of the adapter and along with that they have highlighted a few of the key features on the front with small icons. On the back they go into a little more detail with examples of how you can use the adapter as well as a few key features listed in multiple languages. 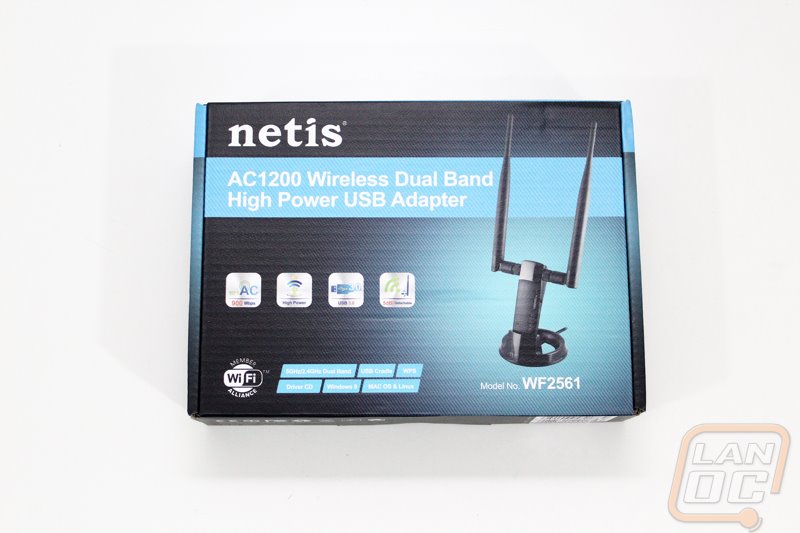 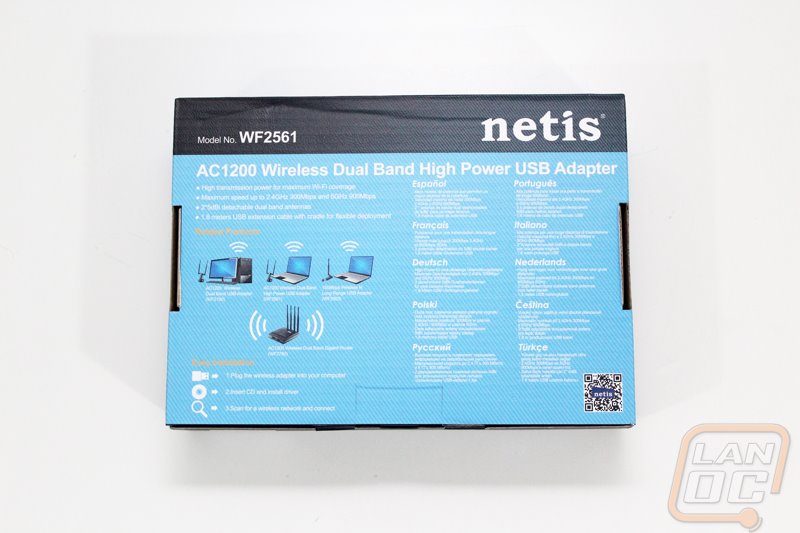 Inside the box the adapter is split up into a few pieces. The base, adapter, and both antennas are split up to pack easier into the small box. The adapter is wrapped up in a static protective bag to keep it extra safe as well. Everything sits in a recycled paper tray that is formed to hold everything in place. For documentation you do get an installation guide as well as a software disc. 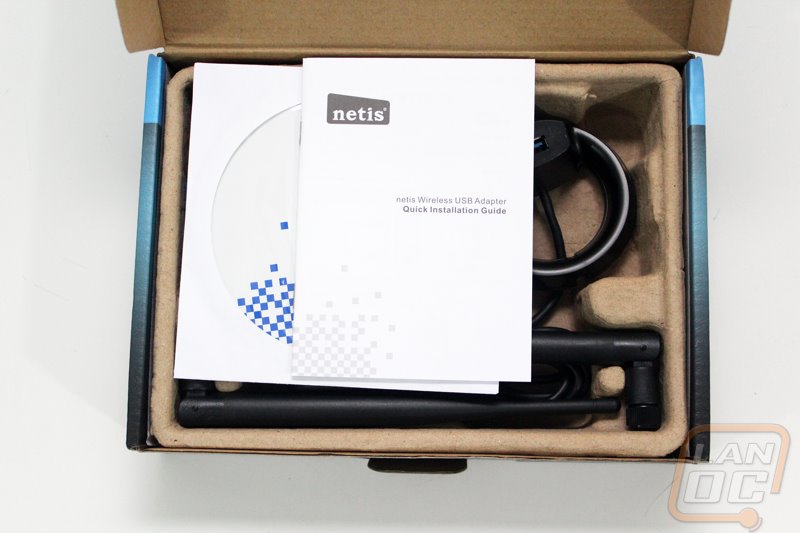 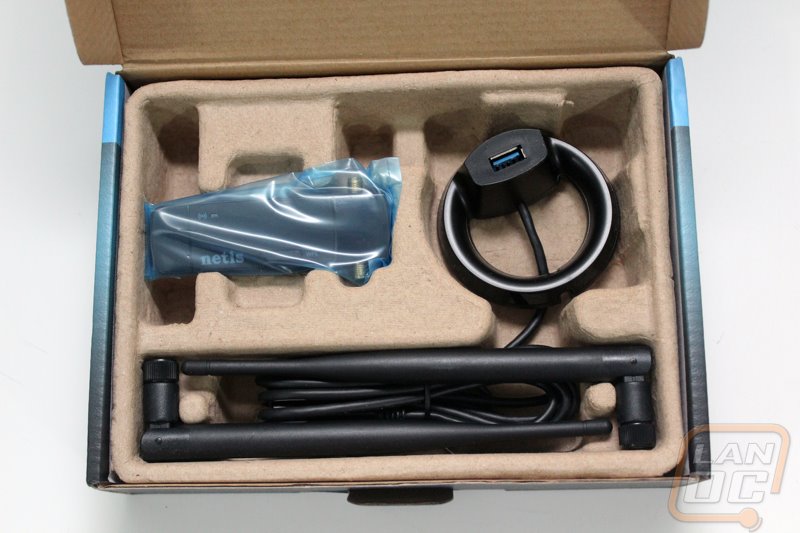 Before getting everything setup I downloaded the latest software from Netis’s website. The software takes a little while to get installed but once installed everything is very simple. I really like that they kept the software basic and didn’t try to put a basic skin or overlay over everything. A lot of companies put the skins over everything to make their software look more modern, but in the end they typically make things harder to navigate.

The software lets you select all of your Realtek based wireless devices. Once we select the Realtek 8812AU (the AC1200 Wireless adapter), we have tabs on the right that breaks everything down. The first page has all of the general information with the device mac address and IP, Subnet, and Wireless information. Most of the tabs don’t have much going on but I do love that you can pull up the statistics page to see if you have any packet loss. 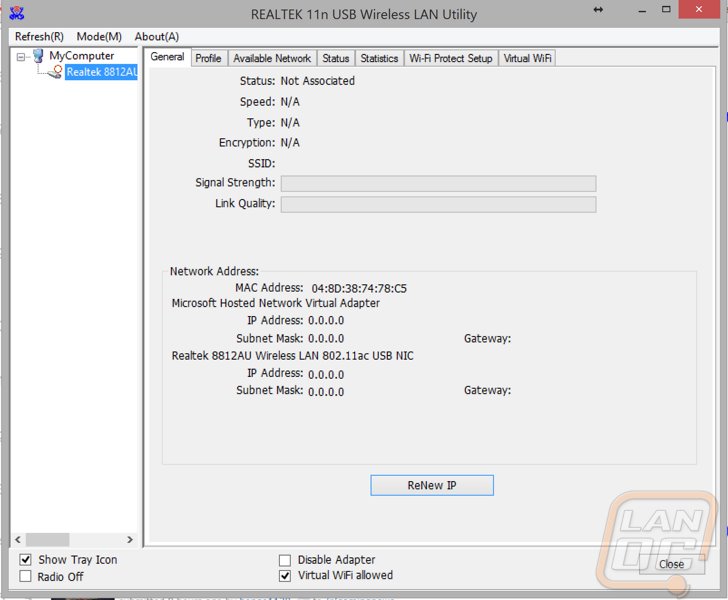 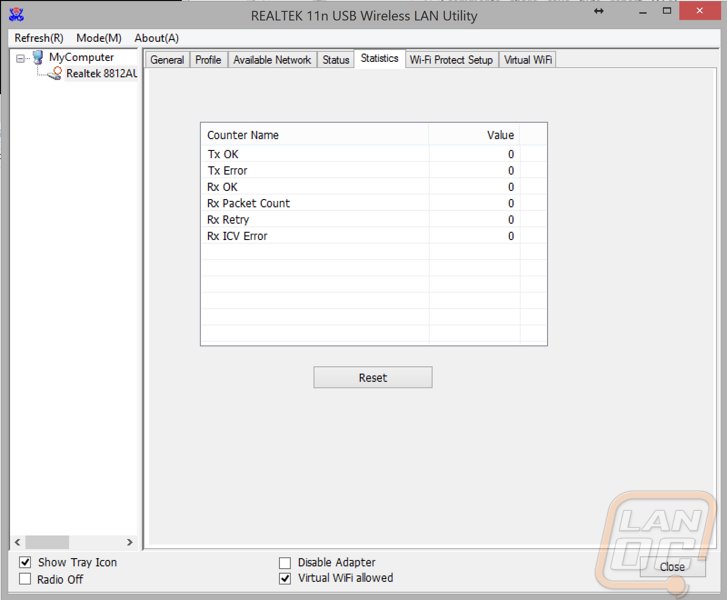 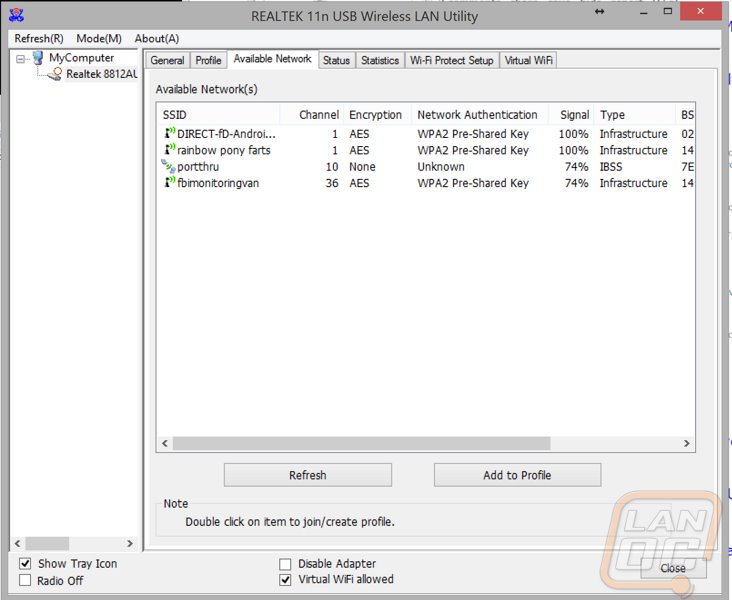 What really caught my eye when playing in the software though was the option to switch to an access point mode. Here we can hook the AC1200 to a PC or router to run your own wireless network. Here you can set up your SSID and your security settings. 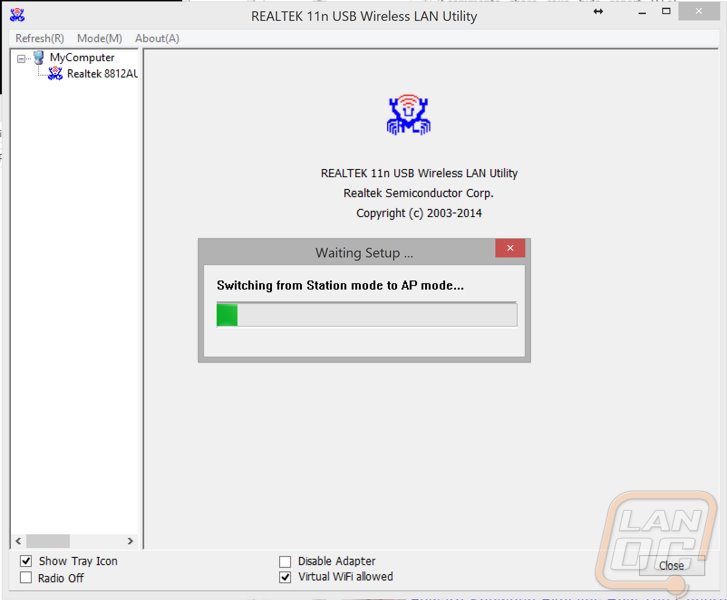 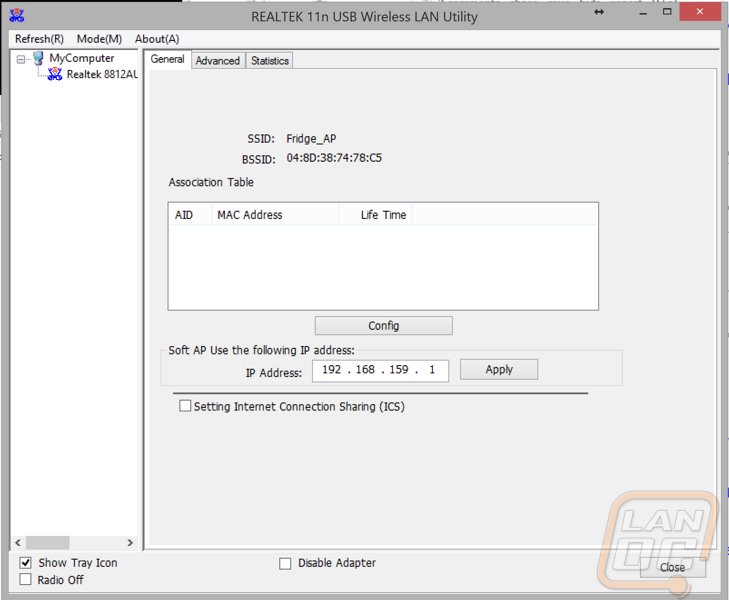 Before we jump into how well the AC1200 performed I did want to quickly go over what you get when you buy it hardware wise. For starters you get a USB 3.0 base with a long cord to reach from the top of your desk to your computer or somewhere else nearby to get the best signal. The base is a small round ring with rubber on the bottom and a small cutout for the cord to run under it. 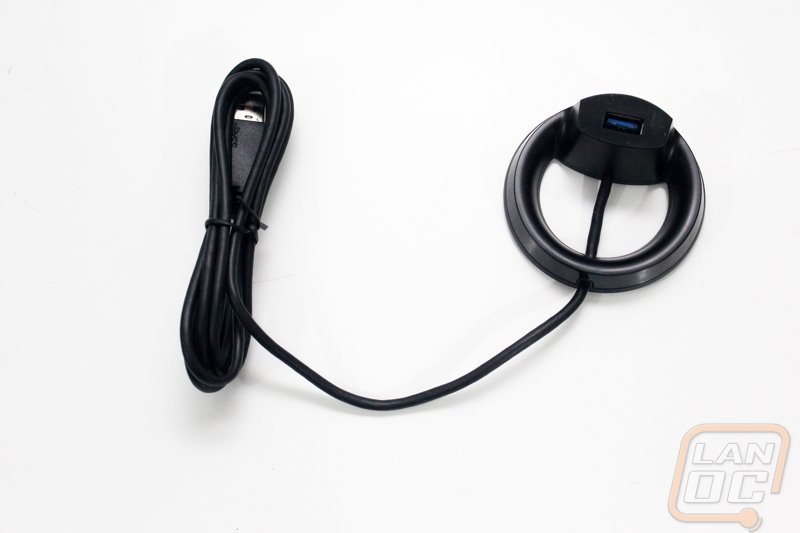 You get two large antennas to get the dual bands and judging by the size of the antennas you should get a good range as well. They around about twice the size of a normal router antenna and are spot on for the old high range antennas you could pick up to extend the range of your router. Keep in mind that in order for a signal to be extended both ends have to have large antennas though. 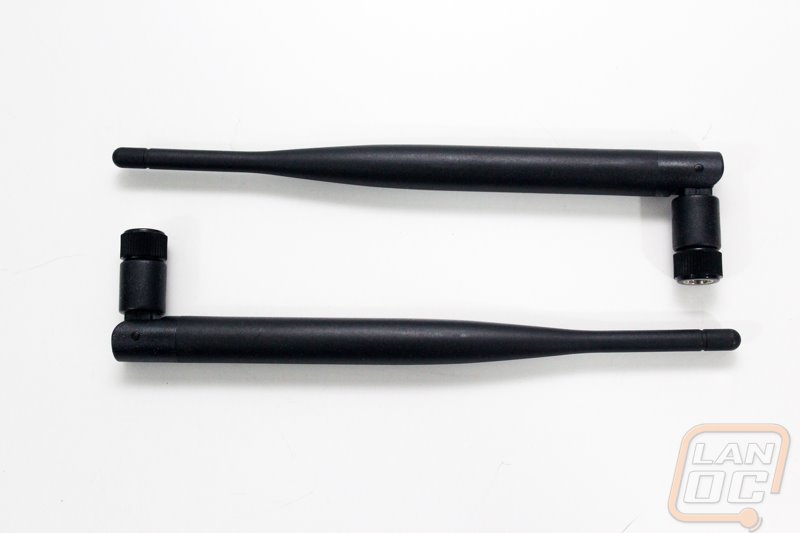 Then of course we have the actual wireless AC1200 adapter. It comes with a cap over the USB connection but you will need to toss that to the side to get rolling. The two antennas attach to the adapter on the two connections on the sides. The adapter does have a WPS button as well as a small activity LED as well. The adapter as well as the base both have a gloss black finish. 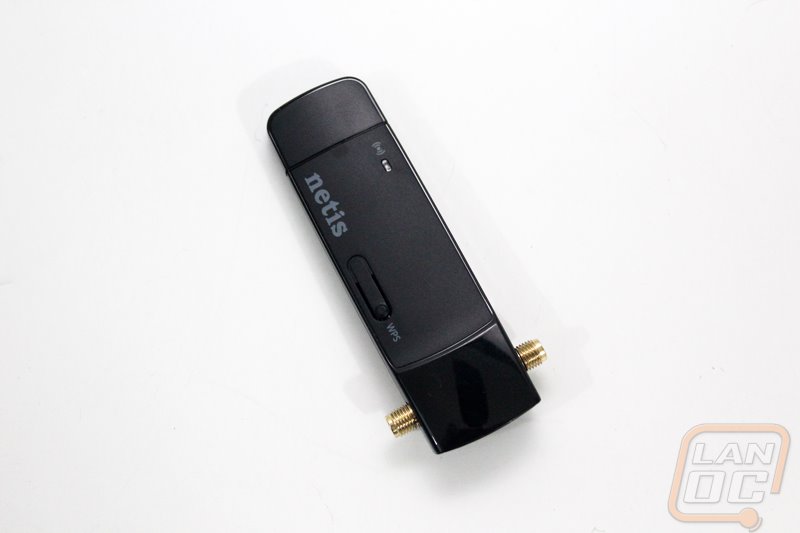 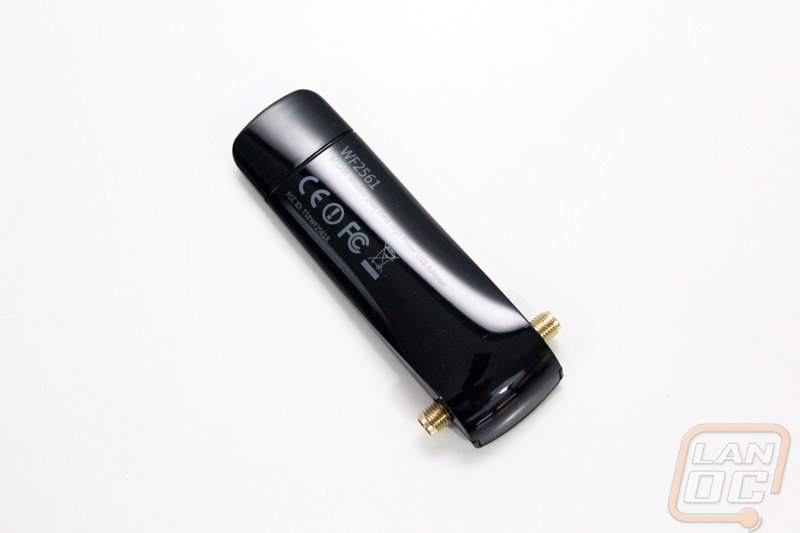 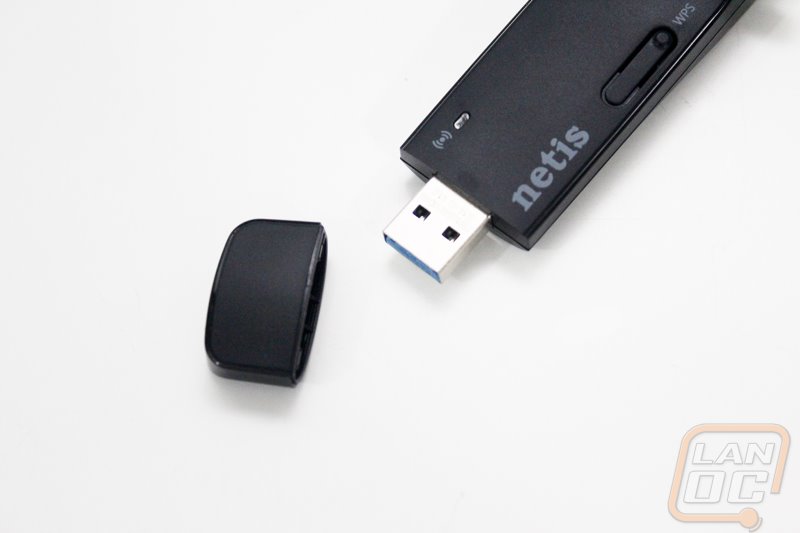 With everything put together it all makes a little more sense. The base holds the adapter up and the antennas stick up on each side giving it a horns look. It remind me a lot of the old bunny ears we used to use on televisions, without the extending antennas. 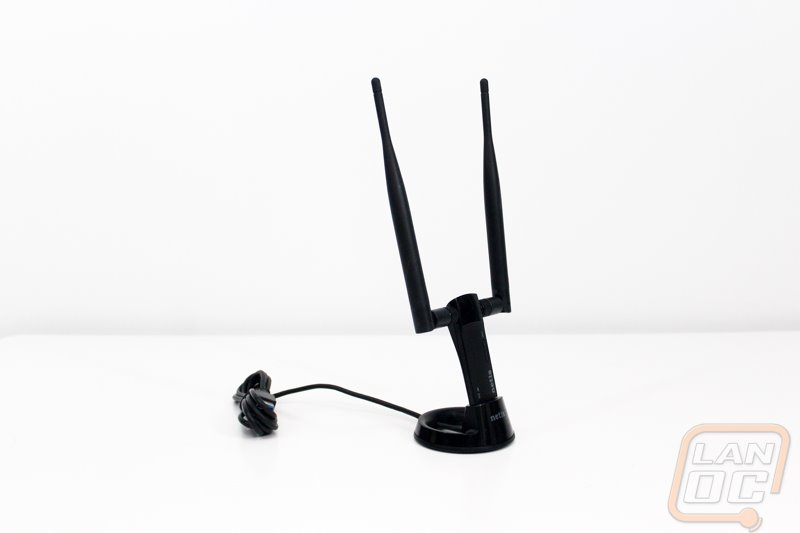 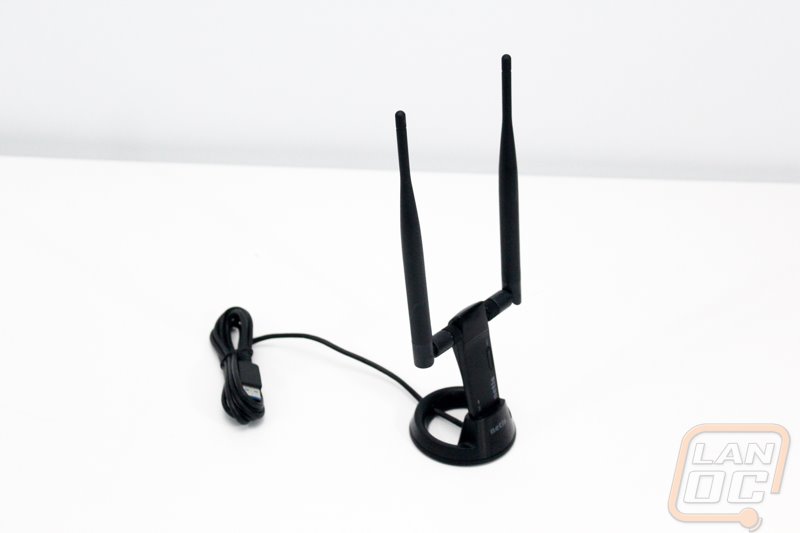 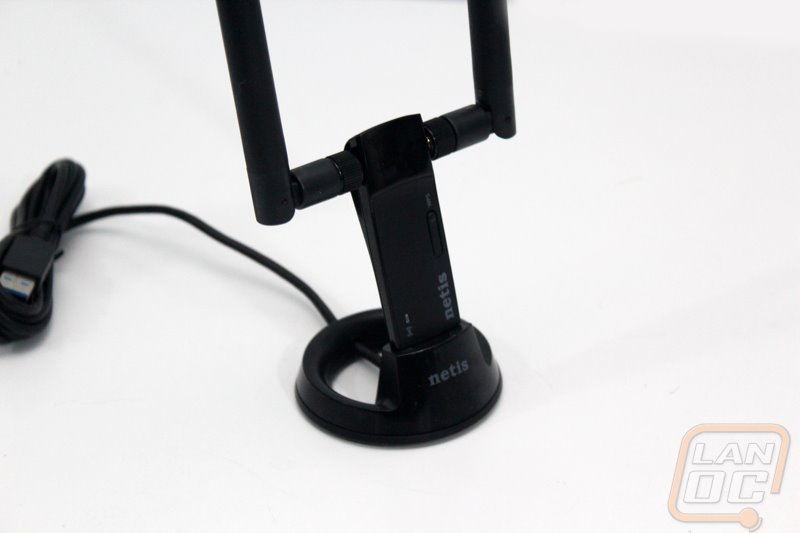 Once I got everything together and set everything up I had to make sure I could test on a full wireless AC network. I know it might be ironic, but in the LanOC office we normally only have a wireless N access point along with our PFSense router. So for testing I actually had to dig out the Wireless AC access point that we use for the staff to connect to at our LAN events. I’ve put off the office upgrade because we haven’t had any wireless AC devices come in yet, but it looks like I need to finally make that jump.

Anyhow with everything setup I ran my main PC on wireless for a few days and ran a few tests. Performance ran nearly parallel with wired results, something that you could never do with wireless N. In testing I saw results that were almost exactly the same as our wired results. In some situations it was actually faster than wired, but it was very dependent on the distance from the router and the environment. In our office, we often struggle with issues with nearly any wireless device because there are just so many things interfering. To test range I tested the AC1200 adapter with my laptop and was actually able to connect and get great performance anywhere on the property. To some this might seem small, but typically I struggle to keep a good wireless signal over one room away from the router due to all of the interference and the thick old walls of our house.

So is the Netis AC1200 Wireless Dual Band Adapter the wireless adapter to get? Well in the past we have also taken a look at a similar model from Asus. The main difference though is with the external antennas attached to this model. This made a clear difference in overall reception and range. This does make the adapter big and bulky though, I wouldn’t consider packing this along with my laptop but the Asus model I wouldn’t have a problem with keeping it in my bag on the off chance I want to get better reception. That said the pro’s are much better than that single con. The wireless performance was as fast and sometimes even faster than running wired. I don’t think running a house full of wireless AC devices is a replacement for a wired household, but if you have one or two PCs that are hard to reach is still a perfect option for those devices. The software was very simple, but this isn’t a con in my opinion because I was able to get right to the point. The other awesome feature is the ability to actually use this adapter as an access point should you need one. In fact there is a good chance I might toy with running this adapter right on our PFSense router to get Wireless AC up and running in the office, that is assuming I can get it to work. Netis does support Linux with this adapter, so I have high hopes!

So is this a good buy? Well I think if you want the AC1200 adapter for a PC then this is a great option. The size is a limitation for laptops though. What really impressed me was the pricepoint though. You can currently pick this exact model up for just under $30 and at that price I don’t think you can go wrong! 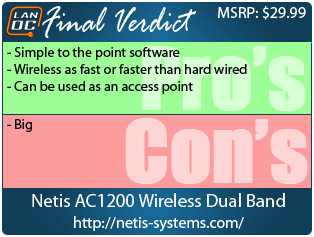 You might call him obsessed or just a hardcore geek. Wes's obsession with gaming hardware and gadgets isn't anything new, he could be found taking things apart even as a child. When not poking around in PC's he can be found playing League of Legends, Awesomenauts, or Civilization 5 or watching a wide variety of TV shows and Movies. A car guy at heart, the same things that draw him into tweaking cars apply when building good looking fast computers. If you are interested in writing for Wes here at LanOC you can reach out to him directly using our contact form.
Discuss this article
Log in to comment
Posts in discussion: Netis AC1200 Wireless Dual Band Adapter