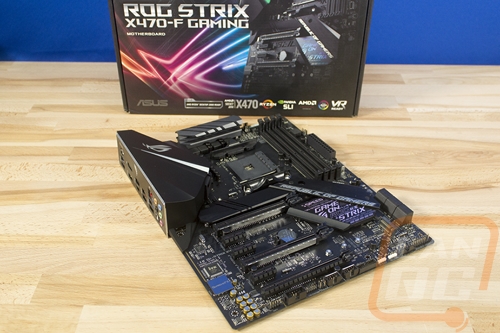 So where does the Asus ROG Strix X470-F Gaming fit into the market? Well for starters, compared to the two other X470 boards I’ve taken a look at it is a little cheaper. They accomplished this by not including wireless for one. But even without that, you do still get the good Asus software and BIOS, especially important with their Aura lighting control. In my testing, I found that the heatsinks cooled well, not the best, but still better than most of the competition. I’m also really digging the new blacked out look. I liked the old Strix look as well, but the new look, especially on the I/O cover, looks good. Speaking of having the I/O shield pre-installed as well is a nice touch. You get a ton of fan headers including two pump compatible plugs, RGB lighting connections on the top and bottom of the board that are easy to spot, and overall more than enough connections. That is with the exception of rear USB ports. Asus included enough for most people, but I always want more even if they are just old school USB2s. My only other complaint was with the weird holographic cybertext on the bottom heatsink, it really takes away from the clean look. I didn’t mind it on the rest of the board, in fact, I kind of like the use of gloss black over flat black for low key styling.

So is this the X470-F board to pick up? Actually yeah, both the Gigabyte and MSI boards I took a look at had big pros and cons where the X470-F seems to fall in a little cheaper with everything you might need. That is of course unless you need wireless built in! This is the gaming board I would recommend otherwise though. It is more of a middle ground than the high-end Crosshair Hero but that is a good thing when it comes to the pocketbook with an MSRP of $214.99. I’ve said it before, but if you already have an X370 board don’t bother. But otherwise, this should be good for your new Ryzen 2000 series build. 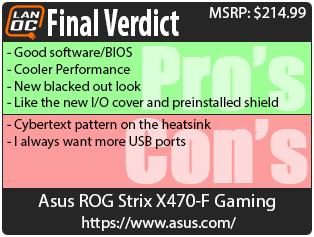 You might call him obsessed or just a hardcore geek. Wes's obsession with gaming hardware and gadgets isn't anything new, he could be found taking things apart even as a child. When not poking around in PC's he can be found playing League of Legends, Awesomenauts, or Civilization 5 or watching a wide variety of TV shows and Movies. A car guy at heart, the same things that draw him into tweaking cars apply when building good looking fast computers. If you are interested in writing for Wes here at LanOC you can reach out to him directly using our contact form.
Discuss this article
Log in to comment
Posts in discussion: Asus ROG Strix X470-F Gaming

We have 745 guests and one member online