For the most part, the changes I’ve seen between the X470 and X370 boards have been cosmetic. But with the X470 Aorus Gaming 7, they made one significant upgrade that makes a big difference across the board. In order to be able to handle the new boost clocks of the Ryzen 2000 series CPUs Gigabyte upgraded the VRM cooling. The switch from cast heatsinks to sheet metal fins might seem small but both visuals and performance were upgraded. This seemed to prompt the change from all black to a black with a silver look on the board as well. This new look is a nice change and looks great.

Obviously, performance was top notch as well, especially in cooling. But it was simple stuff like having 5 different USB headers inside and all of the USB connections on the rear I/O that are going to improve quality of life. I also like that you can change the entire look of the board by toying with RGB colors in the software. This is because the entire board is covered in lights. For some that might be a bad thing, but I like to at least have the option to customize things. You can also add RGB lighting to your case with the RGBW or Digital RGB headers as you get two of each. RGBW is normal RGB with a fourth color option for pure whites and digital is individually addressable lights that let you do crazy effects.

As for downsides to the board, there weren’t many. I think some improvements could be made in the BIOS, especially with Zen and Chipset based options being buried. The other issue was that our test boards wireless didn’t work at all. In fact, it caused my bluescreen and crashing issues until I was able to disable it. It is an Intel wireless NIC so performance should be solid, but I hope that failures are few and far between.

Overall I think Gigabyte is on to something here. This is a solid board that I think overclockers are also going to like. I personally love the orange trim, but I suspect some people won’t. As for the price, it comes in at $239.99 MSRP and right now you can save two bucks with a HUGE sale at Newegg on them lol. This is a higher end board but the Gaming 7 gives you higher-end features. In fact feature for feature this seems to be a good deal when compared to the Crosshair X470, hopefully, I will get that board in soon as well to tell for sure. I don’t always recommend Gigabyte boards as I have had some issues with them in the past but the Aorus Gaming 7 seems to be a good option for anyone looking for a higher-end X470 build now that the new Ryzen CPUs have hit the market. If you have X370 already, don’t bother with an upgrade though.

**Update, the issues with the wireless ended up being fixed with an updated driver. See the performance section for more details** 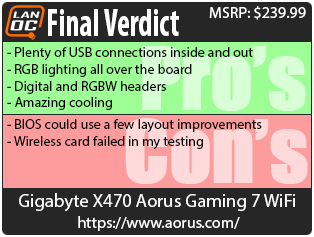 You might call him obsessed or just a hardcore geek. Wes's obsession with gaming hardware and gadgets isn't anything new, he could be found taking things apart even as a child. When not poking around in PC's he can be found playing League of Legends, Awesomenauts, or Civilization 5 or watching a wide variety of TV shows and Movies. A car guy at heart, the same things that draw him into tweaking cars apply when building good looking fast computers. If you are interested in writing for Wes here at LanOC you can reach out to him directly using our contact form.
Discuss this article
Log in to comment
Posts in discussion: Gigabyte X470 Aorus Gaming 7 WiFi

We have 1360 guests and no members online