Verizon and other carriers may subsidize your initial phone purchase but you may not know that your fancy new DROID Incredible would cost you $529.99 to replace at retail price. That is a great reason to invest in a quality case to protect your new toy phone. Notice the key word, invest. A case can be far more than a way to decorate or distinguish your phone. OtterBox, a company we have seen before a few times, is known for their ultra-durable cases. When you’re talking about protecting a $500+ portable computer you want the best right? We are going to take a look at their Commuter Series case for the Incredible, let’s jump in.

The Commuter Series Case for the Incredible is packaged in a clear plastic clamshell package with a full view front and back of the case. Inside the case they have placed a picture of the Incredible’s home page to give you an idea of what it will look like with a phone in it. With the clear plastic clamshell packaging all of the information is printed on a piece of paper sandwiched into the clamshell. The front only has the cases name along with OtterBox’s signature yellow strip along the top with their logo inside of it. Around on the back they have a short feature list in three different languages along with a couple small photos of the case. Inside the paper opens up to have the installation instructions printed on the back. All of the other goods are packed inside the case itself including the screen protector and a micro fiber cloth to help with the installation. 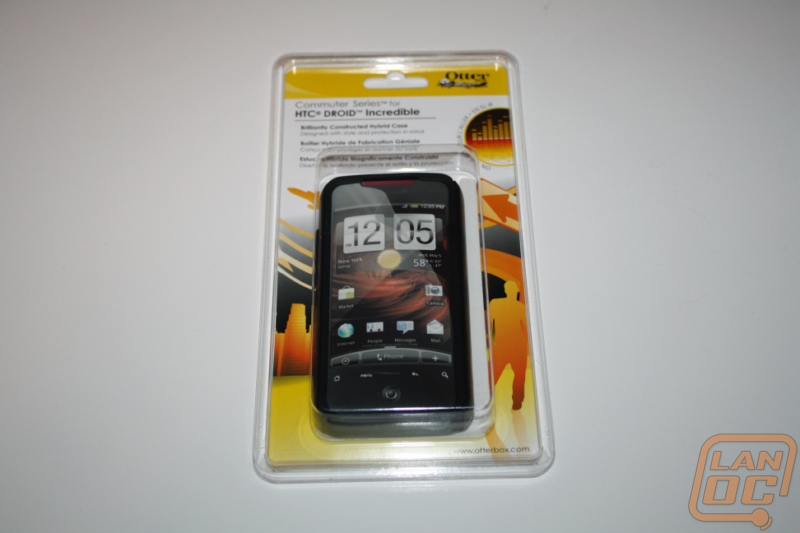 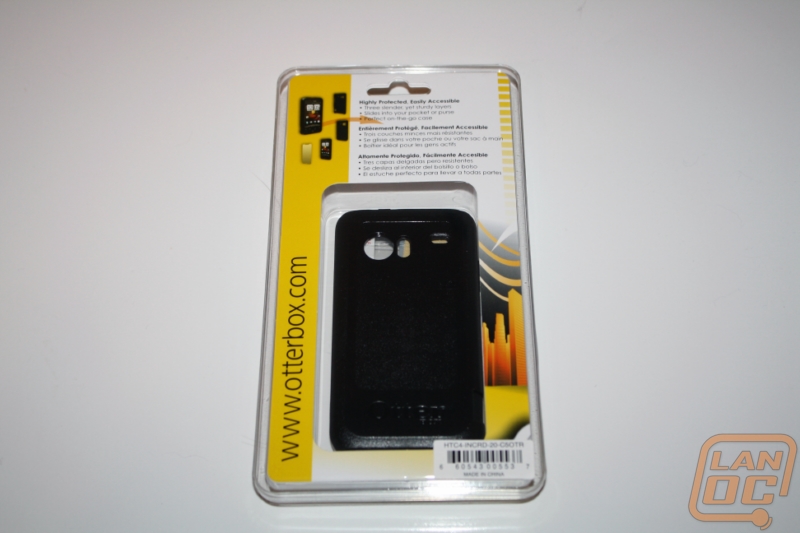 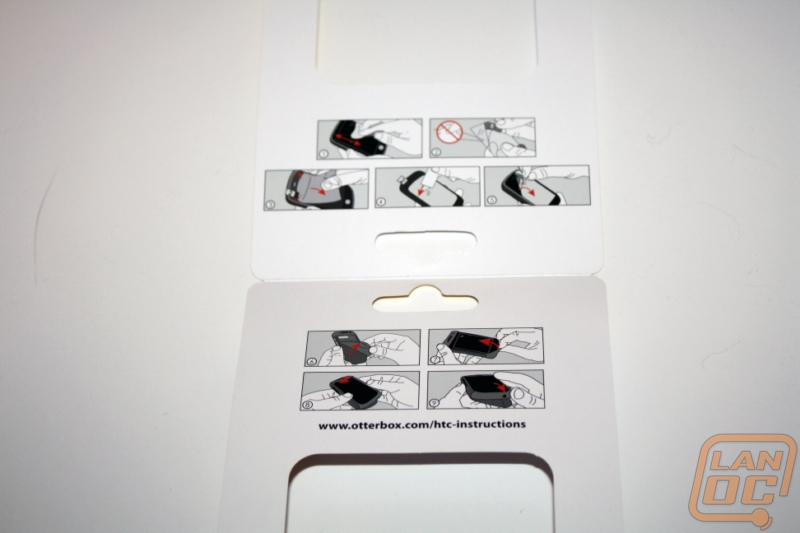 The Commuter is basically a runner cover with a plastic shell that goes over it. Installing the case took less than 30 seconds, minus the included screen protector. Installing the screen protector on the other hand requires a steady hand, a perfectly clean phone, and a dust free room. If you phone has even the smallest dust particle or hair you will be pulling it all apart again and re-cleaning. Each time installing without any bubbles gets more difficult. Having said that, if you follow their instructions and make sure you are installing it in a dust free room you shouldn’t have any trouble. If you are wondering where to find a dust free room, run a hot shower in your bathroom without the vent on, the steam will take the dust out of the air. 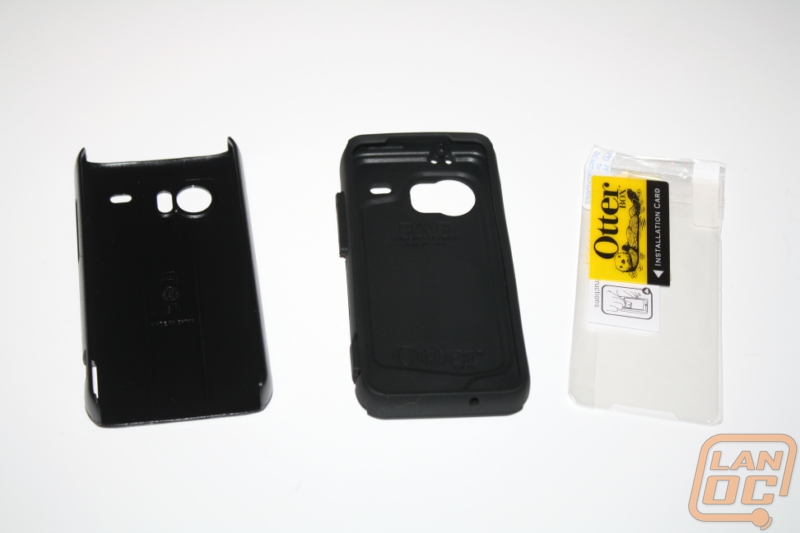 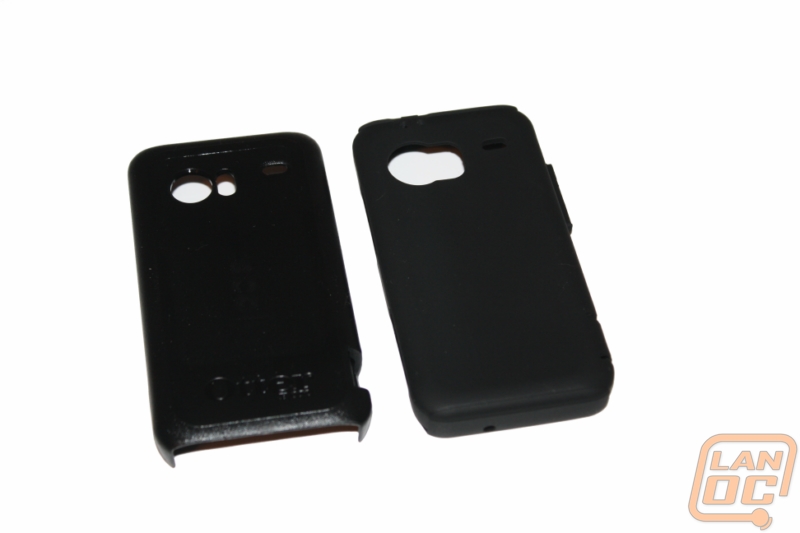 With the case installed on our HTC DRIOD Incredible it was clear right away that its built to take a beating. The rubber cover plugs both the headphone and charging ports when they are not in use to keep dust and other contaminants out. The case doesn’t dust or water proof your Incredible but it does its best to help, other than the uncovered front screen. To keep the front screen protected you have the included plastic starch protection, but on top of that the case itself has a few millimeter overhang that keeps the glass screen from hitting when landing on a flat surface. 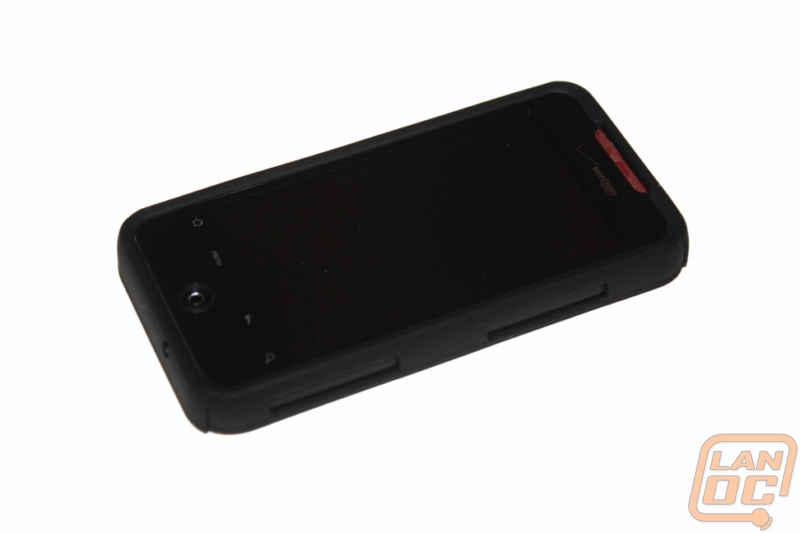 A rock or a corner would still do a number on the glass screen if dropped on it so you don’t want to throw caution to the wind with the Commuter on your Incredible. During my testing I dropped my phone multiple times unintentionally and intentionally without even a scratch. The last two cases I have used have broken right at the corner after dropping on the corner, because of that I attempted the same thing on the Commuter without any issue. The rubber barrier between the plastic shell and the phone protects the phone while also giving the case enough flexibility to prevent breaks on this type of drop. 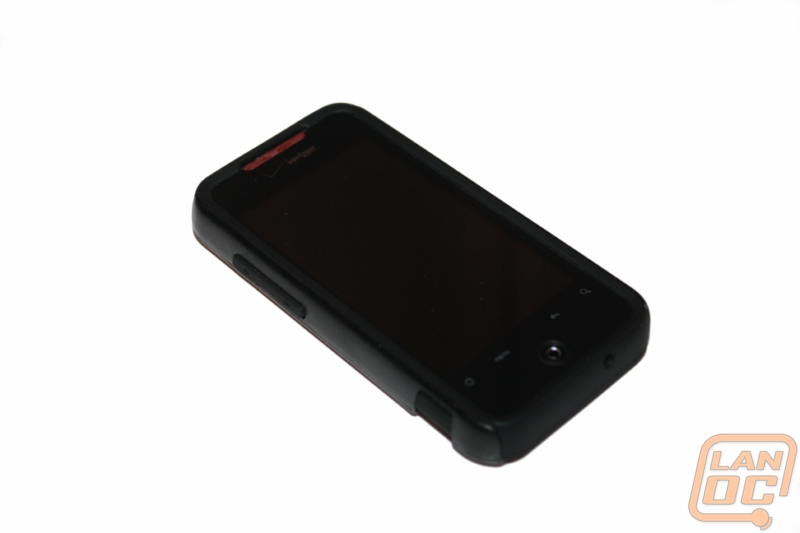 One of the problems we have seen with past OtterBox cases is the added thickness they tend to add to your phone. This time around was noticeably better than the case used on our BlackBerry Storm but is still larger than anything else we have seen on the market. Obviously it’s a tradeoff for protection and this is a choice you will have to make. I myself will take the added thickness as long as my phone is safe. I would be lost without it. The lock and volume buttons function perfectly through the rubber case but they do require more force to get them to work. 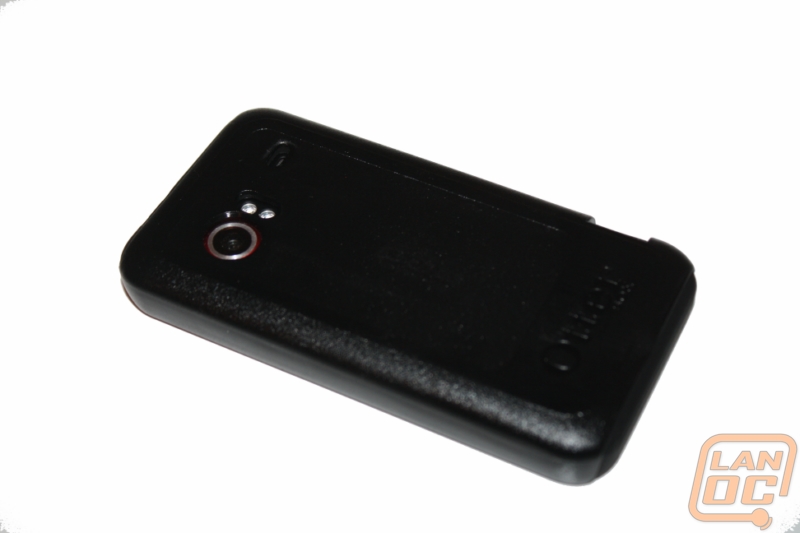 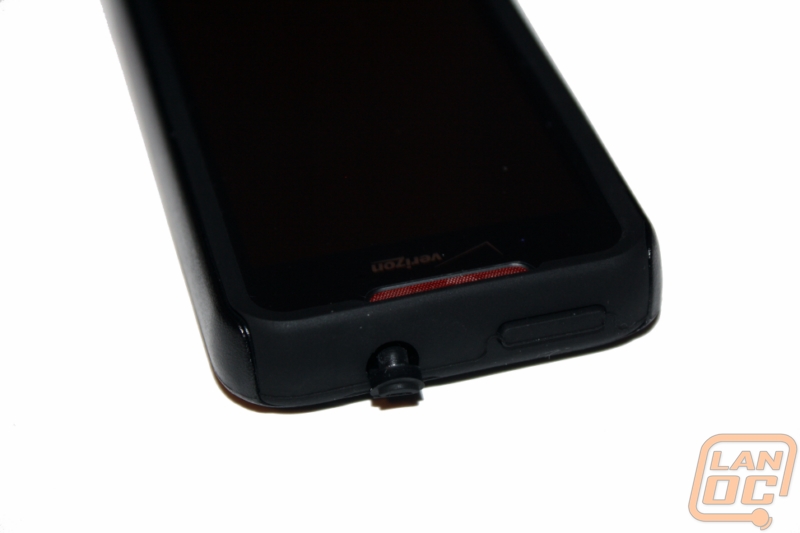 It’s really not a surprise; the Commuter for the HTC DRIOD Incredible is an amazing case. Short of dropping the glass screen on a corner or a stone you will have a hard time breaking your phone while you have the Commuter on it. The tradeoff is the Commuter is a little thicker than a normal case at just over 15.5 mm’s, the Incredible’s normal thickness is 11.9 mm. With a replacement phone costing over $500 dollars, why wouldn’t you want the best to protect it? At $34.95, it’s a small price to pay and I would highly recommend it. 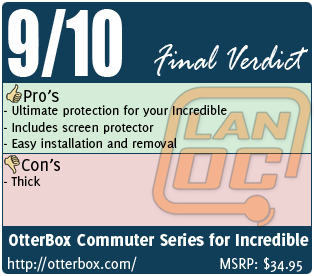 You might call him obsessed or just a hardcore geek. Wes's obsession with gaming hardware and gadgets isn't anything new, he could be found taking things apart even as a child. When not poking around in PC's he can be found playing League of Legends, Awesomenauts, or Civilization 5 or watching a wide variety of TV shows and Movies. A car guy at heart, the same things that draw him into tweaking cars apply when building good looking fast computers. If you are interested in writing for Wes here at LanOC you can reach out to him directly using our contact form.
Discuss this article
Log in to comment
Posts in discussion: OtterBox Commuter Series case for HTC DROID Incredible