The NotePal laptop cooling line from Cooler Master has several options in it's arsenal, many (if not all) that we've had the pleasure of reviewing. However, when we saw their latest addition to the series at CES 2010, we we're anxious to get our hands on it. The ErgoStand boasts many of the features that have made past models so popular, and sports some great new additions of it's own. Fresh to the market, today I sit down with a sample to put to the test.

Review and Picutres by: Adam

Packaging
No surprise will be found here for veterans of the NotePal line. The familiar white background with maroon corner color scheme returns once again, with a slick font and action shot accompanying the front. On the reverse side you'll find a plethora of information, including a features list complete with photos, as well as a specification table.

Inside, the ErgoStand is cushioned on either side by foam placeholdes eliminating shifting, and therefore damage, during transportation. This is a small feature that is appreciated not only during shipping but also for us LAN-goers who will be packing the cooler to and from parties. Since Cooler Master has opted for quality in their packaging, complete with a plastic carrying handle, the box itself is a perfect carrying case as well. Tucked inside are a USB cable and two feet for the laptop itself to rest on. 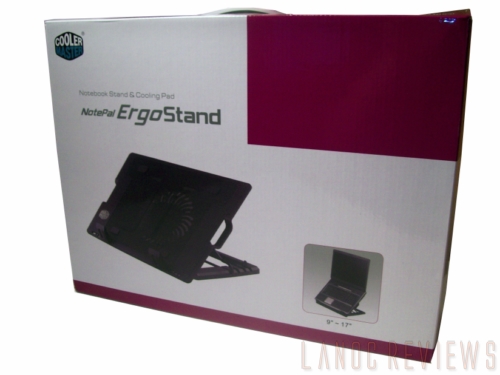 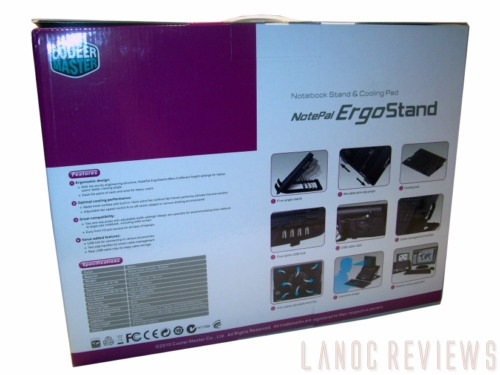 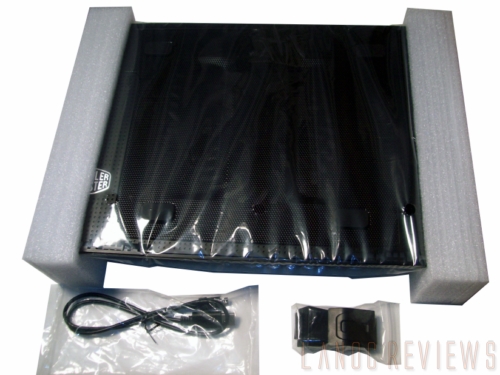 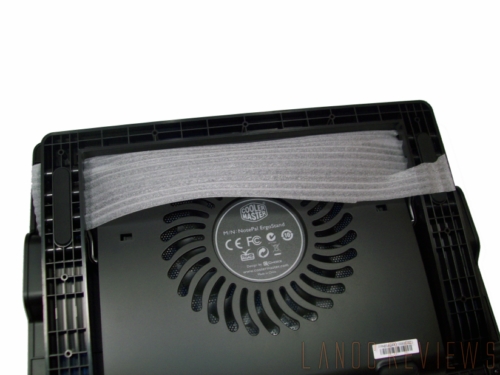 Installation
Speaking of those feet, they are one of the few pieces that even come close to being considered installation. The ErgoStand is largely unpack and go, with the exception of these, and adjusting the elevation, which will be discussed shortly. Along the bottom of the front of the cooler, on either corner, you'll find a rail-like bay in which the feet insert into and slide to the left or right to adjust for the width of the laptop. These detach from the cooler to help with transportation, since when installed add considerably to the overall width of the ErgoStand. 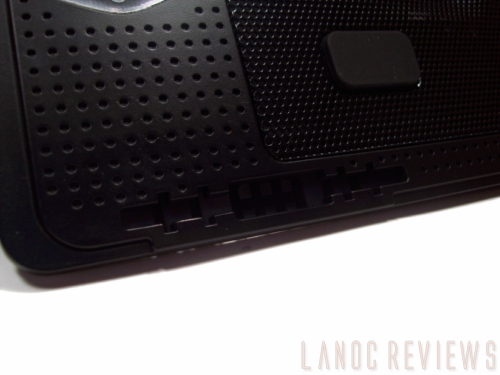 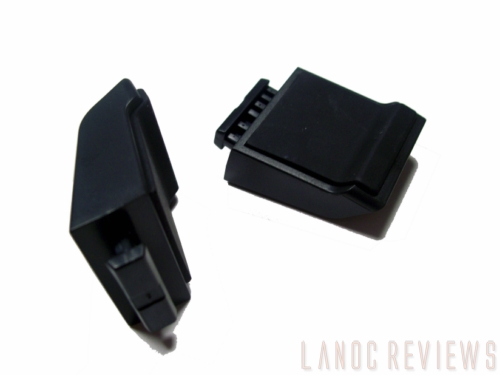 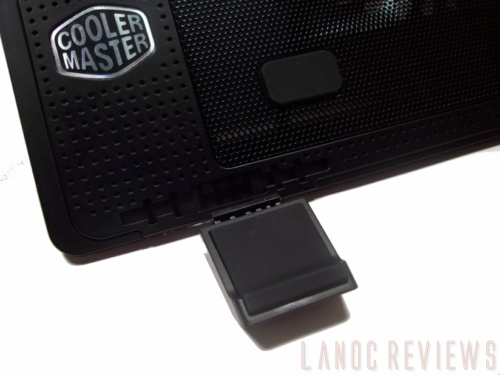 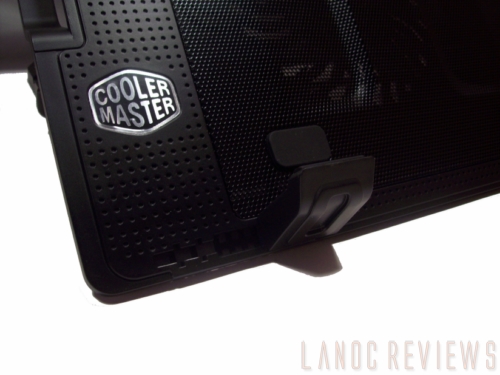 The ErgoStand features five elevation levels, starting with 'flat', as the cooler is packaged. In this state, the ErgoStand has only a little elevation, and the metal arm on the back is resting in clips to keep it secure. From here, there are four notches for that arm to rest in, propping the laptop closer and closer to a 90 degree angle. Adjusting the elevation of the ErgoStand is a quick and painless process, involving literally a matter of seconds to switch, and therefore pack-up as well. 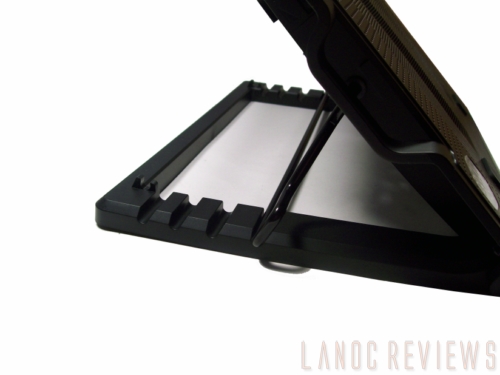 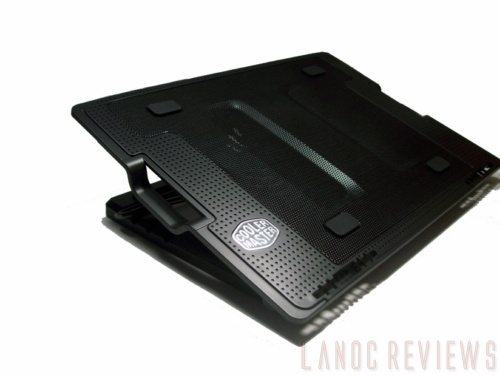 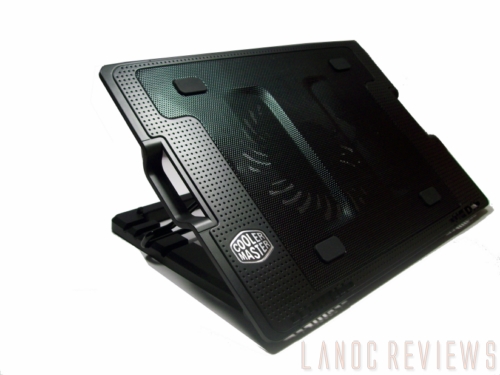 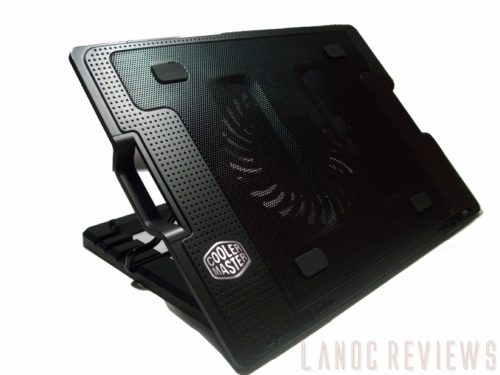 The final step is to plug the included USB cable from the cooler to your laptop. The cord is long enough to strech to either side of the cooler, and two clips have been included on the back of the ErgoStand to hold slack not only in the cooler's USB cable but also others including laptop power supply and other accessories. 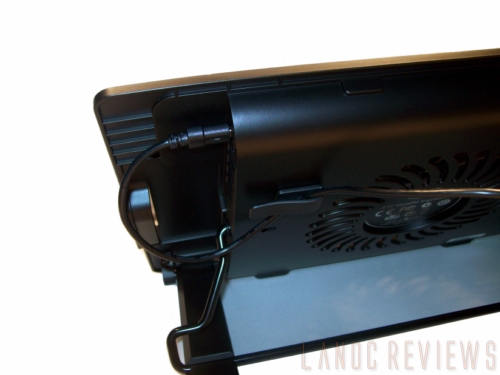 Performance
As mentioned several times, the ErgoStand is a very friendly cooler both to transport, set-up, use, and pack. This is a very simple yet very appreciable quality for those who will be taking this with them to the office, class room, or especially LAN parties. The cooler is also extremely quiet, a quite impressive feat for a model sporting a 140mm fan maxing out at 1400RPM. In fact, it was so quiet that I had to actually lift my laptop off the cooler and feel to see if it was getting power the first time I plugged it in. 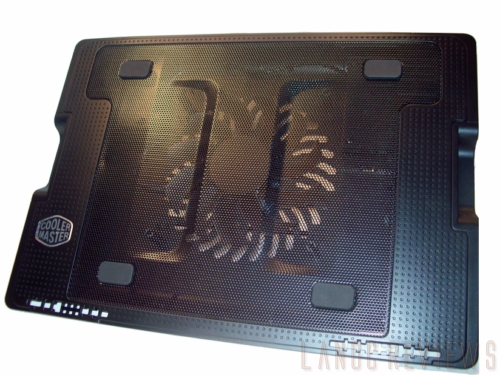 Speaking some to that matter, the ErgoStand features not only an on/off button, an LED light to indicate power (as I would learn), but also a speed control knob to tune the fan to your liking, with a minimum speed of 700RPM. The entire front of the ErgoStand is designed with a mesh plating to help distribute the cooling to all corners of the laptop as well. 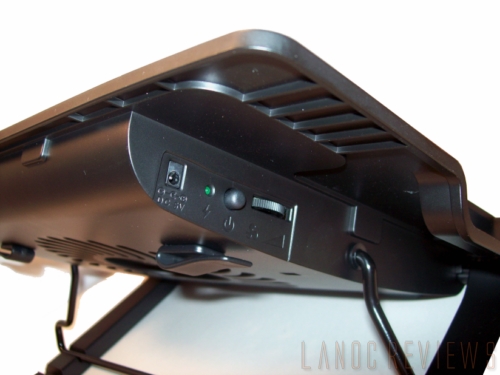 The ErgoStand also holds true to a popular feature of the NotePal line: a built-in USB hub. This time, however, you'll gain four USB ports in exchange for the one occupied to power the cooler. Again, this is an excellent feature and one that gamers with many accessories will appreciate endlessly. 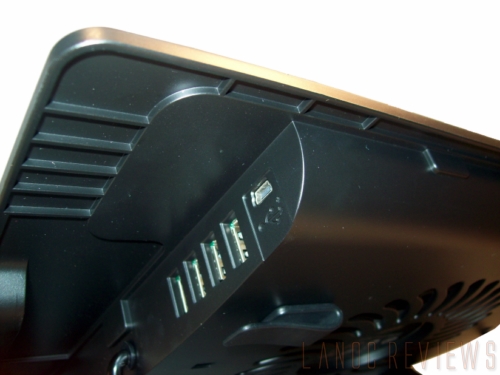 The feet that hold the laptop can be a blessing and a curse, however. They do a tremendous job of securing the laptop, equipped with quality anti-slip grips of their own. As mentioned, they can be adjusted to fit anywhere between 9-17" models. Where they are situated can be a bit uncomfortable, though. For games such as first-person shooters that require use of the WASD keys for movement, on a widescreen laptop such as mine the feet protrude right into where your arm naturally rests for these keys. They can be moved to the right and still securely hold the laptop, which will give you your arm space back, but even then it sits to the right of arm, ready to prod should you venture too far. 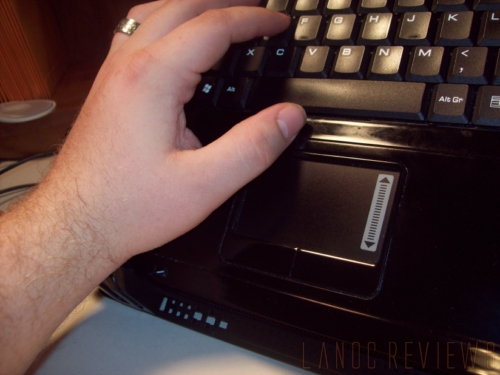 The feet also prevent the laptop from being opened or closed while on the cooler, a minor inconvenience that isn't hard to get over. At lower levels of elevation, the feet could be removed all together, and in fact the cooler surface itself is equipped with four anti-slip rubbers of it's own, but you may not want to give up the security, especially at the highest elevation level. 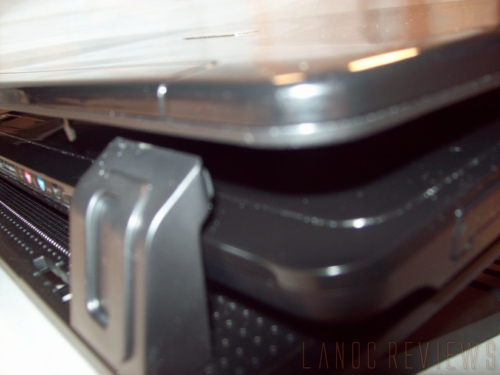 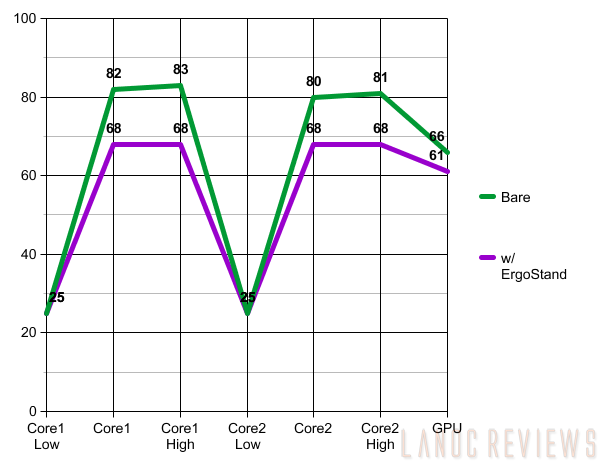 The ErgoStand was inarguably effective in cooling the system, reducing the temperature of the CPU cores by 14 degrees and the GPU by 5, which is impressive considering the load acquired from the addition of Modern Warfare 2.

Overall
The NotePal ErgoStand has an appealing look, great adjustability, and effective cooling. What else could you ask for? Though the feet my get in the way at times, its nothing that can't be tolerated and the features of the cooler far outweigh any minor frustration you may experience. When you factor in the silence performance, four USB built-in hub, and transportability, its obvious why the ErgoStand is one of my new favorite notebook coolers. 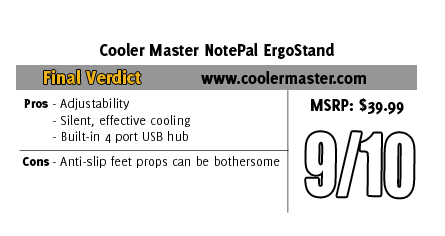 Author: Lersar
Contributing Editor / Event Staff
Adam is a big proponent of LAN parties, esports and speed-running, and helps organize our semi-annual LAN events. He has covered hardware and software reviews of a wide variety, but most content these days come from event coverage, such as other LAN parties.
Discuss this article
Log in to comment
Posts in discussion: Cooler Master NotePal ErgoStand

We have 1473 guests and one member online