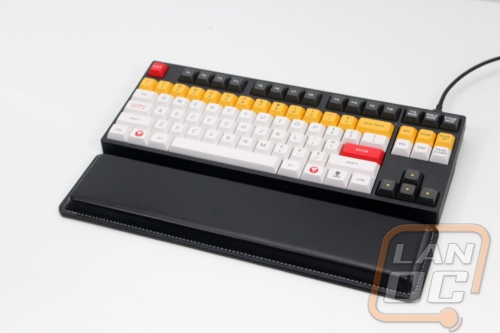 With mechanical keyboards coming back in popularity the need/demand for wrist rests has been rising as well. A while back I covered the Grifiti wrist rests that I had picked up for myself. While I have enjoyed them as I mentioned in their coverage they aren’t exactly designed to hold up. As mine has gone downhill I have been keeping my eye on other wrist rest designs looking for something that would work well for me. One of the designs that stood out to me was the custom made leather Noko wrist rests. I saw their drop on Massdrop and then later explored the gallery of custom designs on their website. Lucky enough they were about to start a drop with Massdrop and were interested in us checking one of the TKL wrist rests they would be doing in the drop.

The packaging for the wrist rest is about what you would expect from a product that is custom made. It comes wrapped up in bubble wrap. In our case there was a tiny note thanking us for the review but I can’t imagine all of the wrist rests ship with that. Then it is shipped in a box slightly longer than the pad. Being from Toronto they ship from Canada unless of course you get in on the Massdrop drop where it will ship from the states unless you are in Canada where those will ship from Noko to keep the costs down. 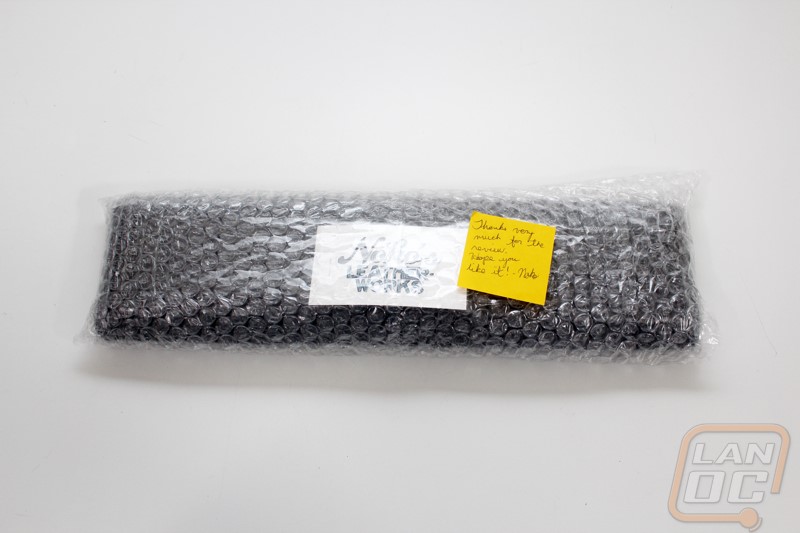 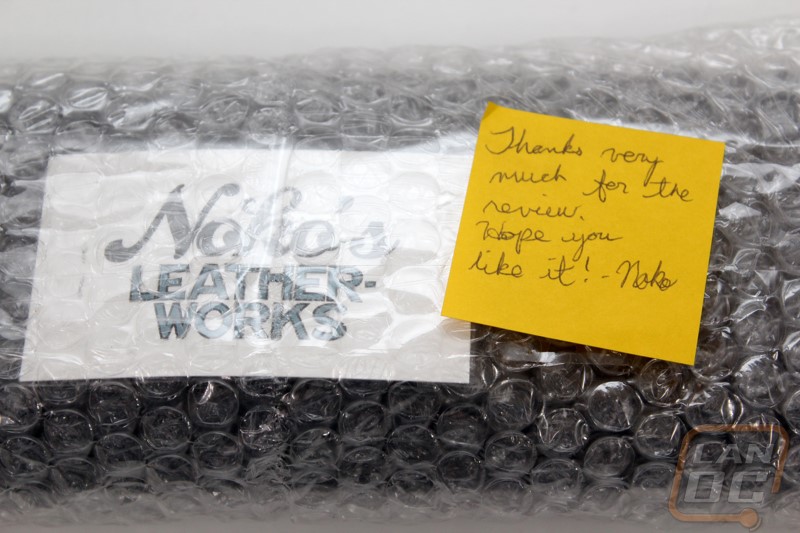 They do include a card with the Noko logo on it as well as a small baggie that has optional written on it. Inside you have the small clear 3M stick on feet or thinner stick on foam grippy pads for the bottom of the wrist rest. The clear feet will add additional hight if you need it and the others will keep things at a similar height to stock but help with keeping things from moving around if that becomes an issue. 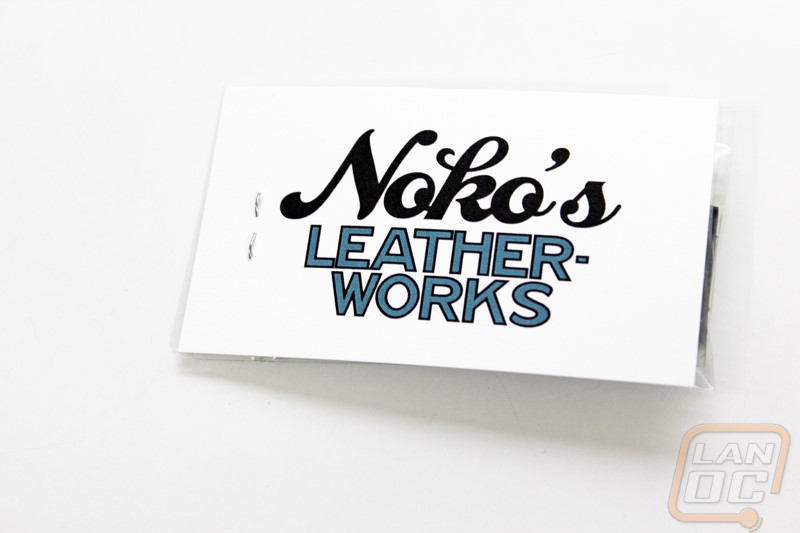 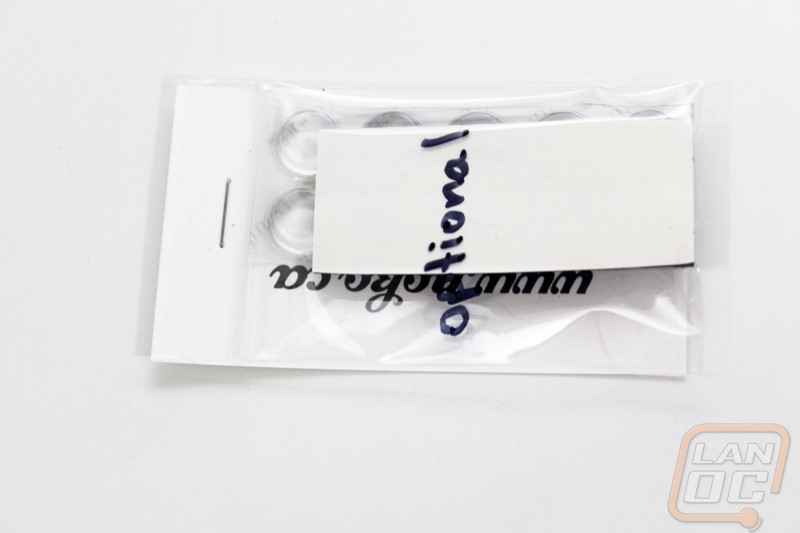 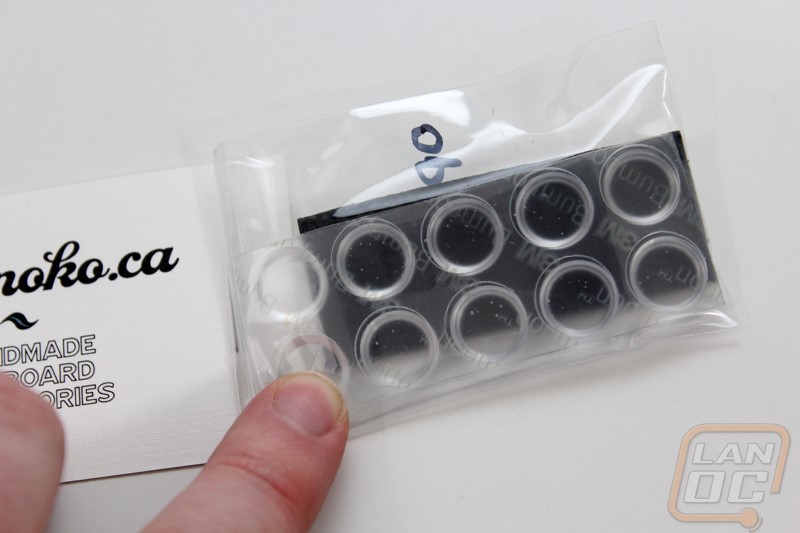 Well as soon as I got the Noko Wrist Rest out it was clear that this is in a different class as the Grifiti. When I first saw the Noko online I assumed it was maybe a thin layer of particle board and some padding along with its amazing leatherwork. This isn’t the case at all. The wrist rest consists of a 2mm stainless steel plate, a thick piece of wood, a little padding, and then the leather that covers it all. The Grifiti is like a wet noodle and this is basically a weapon, my wife even picked it up and swung it at me and I was legitimately scared that it might hurt me. Like I mentioned previously Noko actually sent over the same model that they have going on their group buy right now so our sample was the TenKeyLess sized black pad. It is available with three different colors of thread, ours has the basic white. She does have a whole list of other color options for custom orders as well. The good thing about black though is it is neutral and should go with most desks and keyboards. My desk for example is a light grained wood, but it matches the black speakers, keyboard, and monitor stand. 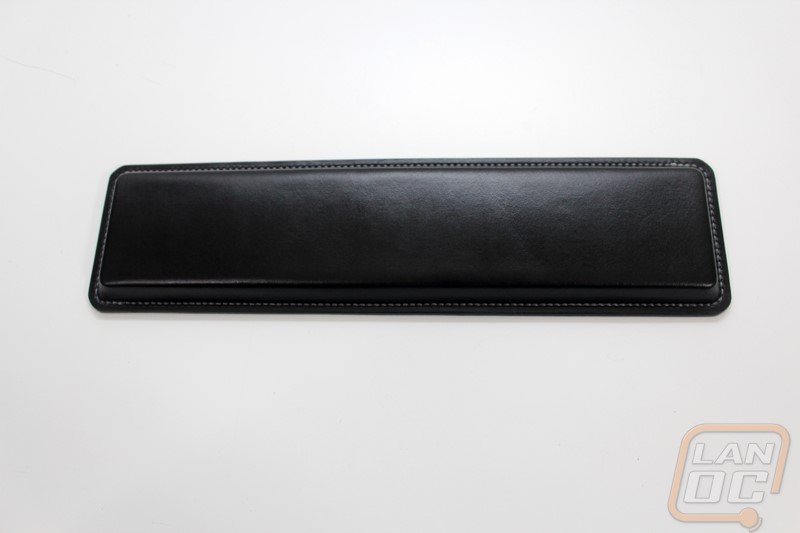 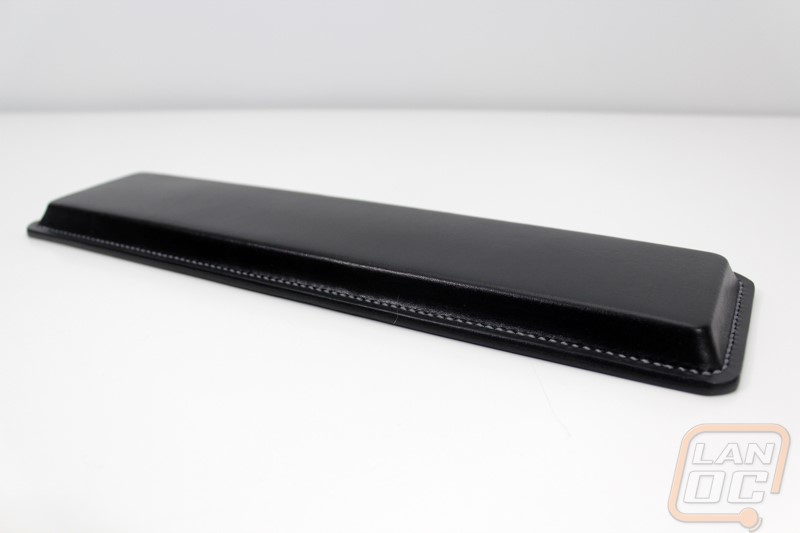 The total thickness of the wrist rest was ¾ of an inch but a good portion of that is just in the leather itself. If we look from the side we can see the edge where the top and bottom pieces of leather joi together, they didn’t skimp on materials here. The edge on our sample is finished the same color as the rest of the wrist rest with a clear coat over top of it to keep the edge from wearing out at all. The stitching holding everything together is evenly spaced and attractive. While ours is a fairly plain design, I could really see some of the brighter stitching standing out here and adding a little style. 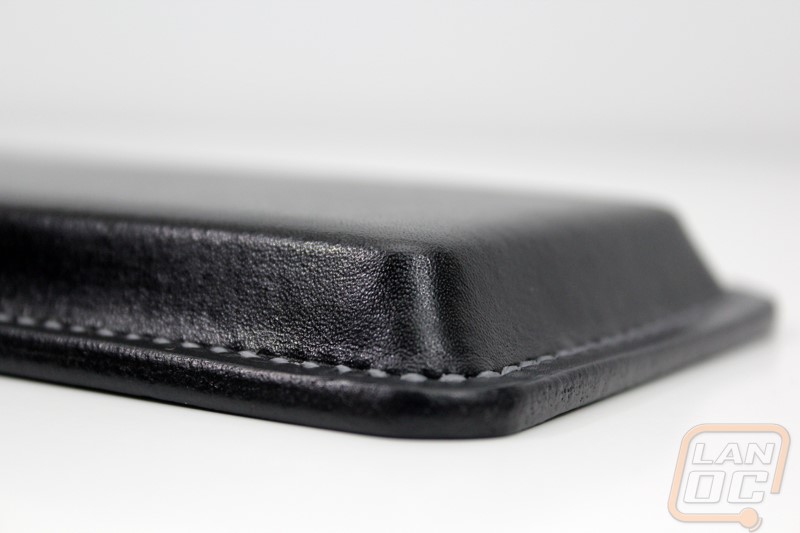 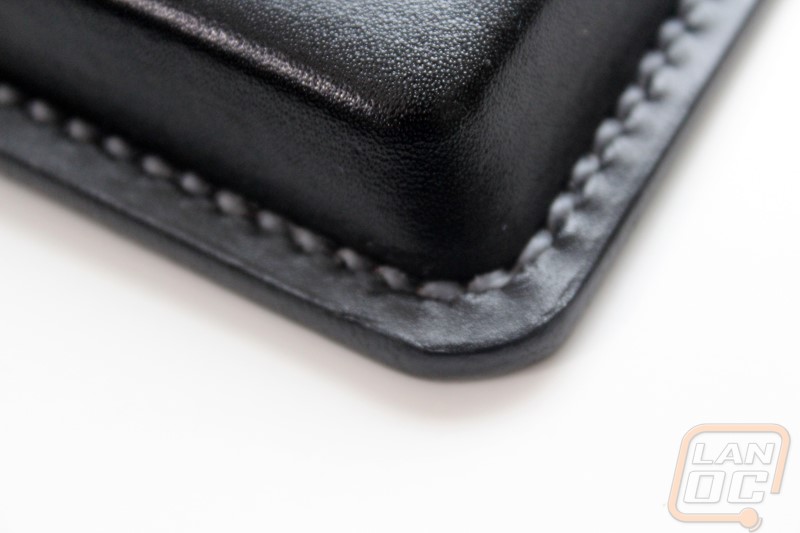 On the flipside of the wrist rest we really don’t have to much going on. We can see the other half of the stitching. In the middle of the pad Noko did brand her logo. With a mass produced part they would most likely just print something but the branding really reminds you that someone spent a lot of time making this. 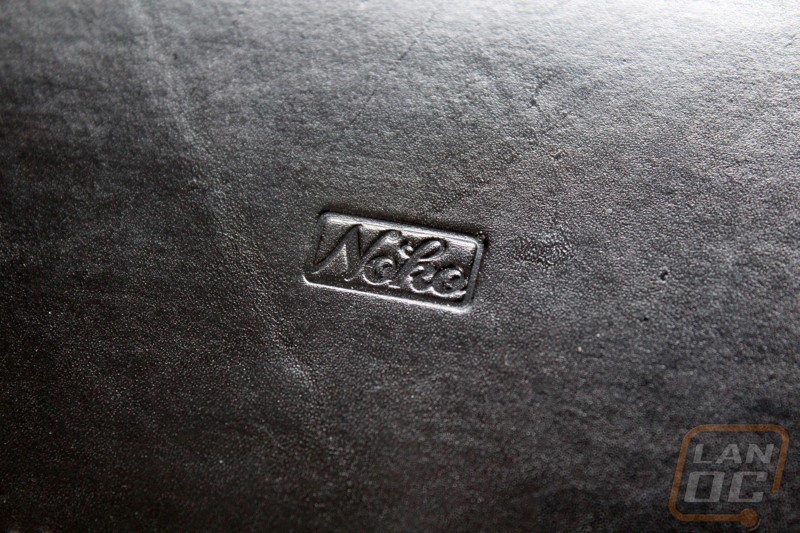 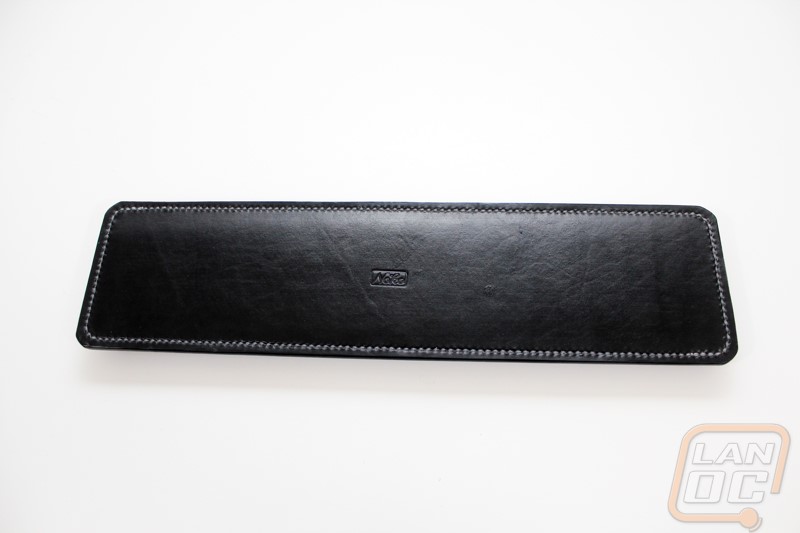 While there isn’t a lot to talk about on the Noko Wrist Rest, the biggest thing that stood out to me was that it fit our TKL Novatouch perfectly. Getting the right fit might seem like something you would expect, but even our Grifiti pads don’t always fit perfectly, add to that that these are completely custom and handmade I was very glad to of had a great fit. 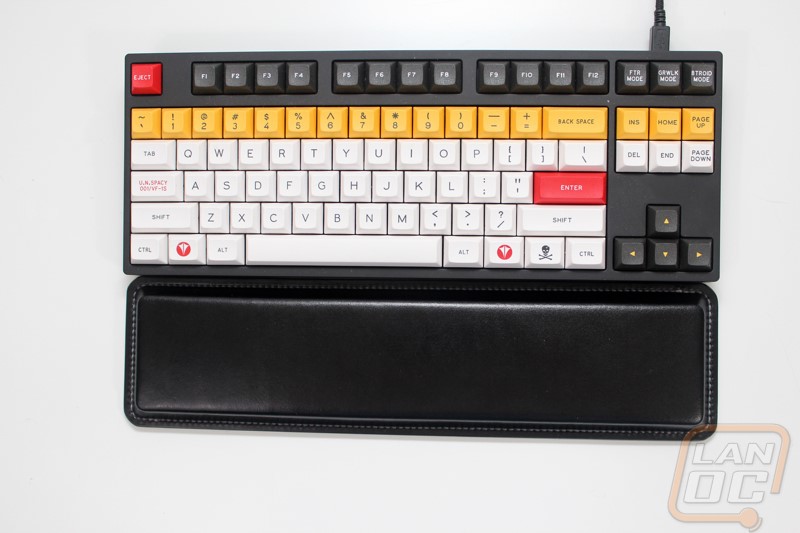 The real question though is how well do they perform. I’ll be honest, when I first talked to Noko about the review I wasn’t really sure on what to expect for performance. While the Grifiti pads wear out insanely quick I had grown very used to their extra thick padding. That is why I have been hesitant to go with a wood wrist rest. So when I found out the Noko’s have a metal and wood core I was a little concerned that it might not be as comfortable as I would like. Well it is obviously not as soft as the all foam Grifiti, but the thin layer of padding along with the leather itself was enough to keep things comfortable. It is an improvement over a built in keyboard wrist rest or any other solid design, but not as comfortable as an extra thick foam or gel design.

Where it does stand out though is in overall build quality and style. Going with high quality materials means it should hold up well over time. Considering how bad the soft wrist rests are for durability this is a welcomed change. I seriously doubt that anyone is going to manage to break the core of the Noko Wrist Rest but I am actually really looking forward to seeing how the leather will look in the future. A nice leather tends to actually look better as they break in and get a little wear on them. That is the exact opposite of the Grifiti that looked months old after just a few days. Even the built in wrist rest for the Cherry MX Board 6.0 had issues with looking nasty after just a few hours. The Noko has held up perfectly so far and the smooth finish makes it easy to clean anything that falls on it off as well.

While the Noko fit my keyboard perfectly for its width, I did have to bust out the tall feet that they included to get the height up to a level that matched my keyboard for me. At first I didn’t do much support but with the feet it was up doing its job. I was a little concerned that the plastic like finish might not grip my desk very well but I was pleasantly surprised there as well. 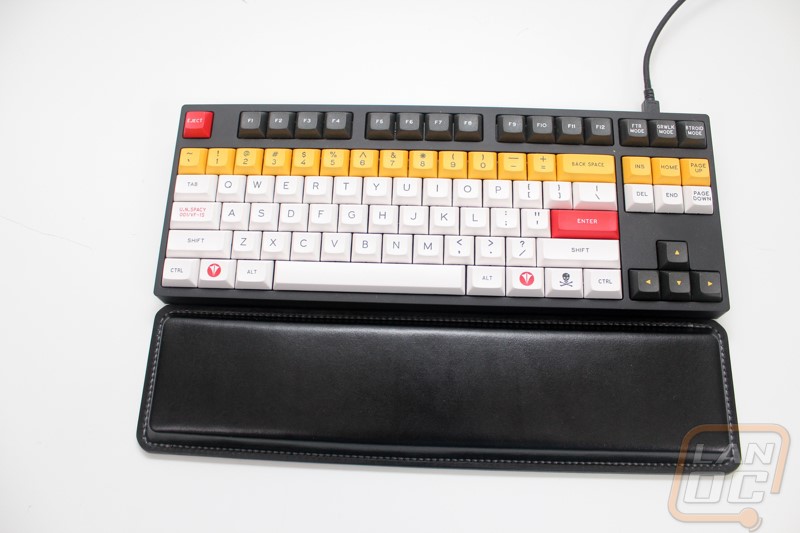 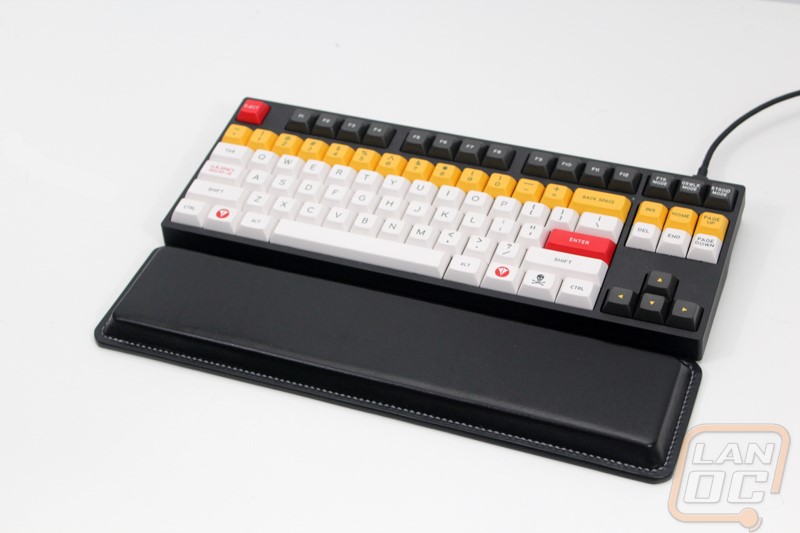 I think the Noko Leatherworks TLK Wrist Rest is the first product to ever come into our office that I had to fight all the way through the review to not make a Ron Burgundy reference. But there is just something about this wrist rest that makes me want to upgrade everything in my office. I love my Grifiti Wrist Rests, but shortly after getting them you would assume I had been using it for months or longer. This reminded me that while a good deal is nice, there is something to be said for quality. I considered a nice custom wood wrist rest but I think Noko found a happy medium between a solid wood or plastic wrist rest and the soft models. You get a rock solid design that is basically a weapon with a stainless steel and wood core. Then on the outside you have the durability and style of leather.

I’m also really excited to see how it transforms as the leather wears as well. Sadly being a TKL wrist rest I won’t be using it day to day, just at LANs. So I guess that means I need to make it out to more events right? I’m seriously considering buying a custom Noko full sized wrist rest as well with a nice LanOC logo carved into it for in the office.

It’s not all perfect, I do wish there was a little more padding. I’m not looking for an inch of padding or anything but a touch more would really let your writs sink in a little. The other downside of course is the price. I’ve been comparing this to the Grifiti but that’s not entirely fair to the Grifiti as it costs closer to $15 and the TKL Noko does run about $80. You can however get in the drop for one on Massdrop right now and pick it up for a little less and I suspect people in the US will actually be saving on shipping as well. While it might not be cheap, you aren’t exactly getting ripped off. Noko has a great product and you are paying for that. Plus if you go for a custom design you can really add some flair to your office. Seriously jump on her website and check out the gallery, the photos really speak for themselves! 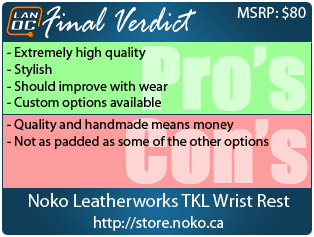 You might call him obsessed or just a hardcore geek. Wes's obsession with gaming hardware and gadgets isn't anything new, he could be found taking things apart even as a child. When not poking around in PC's he can be found playing League of Legends, Awesomenauts, or Civilization 5 or watching a wide variety of TV shows and Movies. A car guy at heart, the same things that draw him into tweaking cars apply when building good looking fast computers. If you are interested in writing for Wes here at LanOC you can reach out to him directly using our contact form.
Discuss this article
Log in to comment
Posts in discussion: Noko Leatherworks TKL Wrist Rest

garfi3ld replied the topic: #36781 03 Jul 2015 17:17
Opps I was so busy yesterday I forgot to bump this. To start our holiday weekend I check out a hand made TKL leather wrist rest from Noko Leatherworks. You can also find this on sale for the next week at the following link

We have 2030 guests and one member online