My first true gaming mouse pad was the Razer Exact Mat. Surprisingly I still pack that same pad in my laptop bag every day due to its metal constructions durability. When I originally purchased the eXact Mat it also came with a wrist rest made to fit it. That same rest actually was carried on from the eXact mat to the Destructor later on for me until it became a little to tore up for me to use day to day. When I had seen Razer’s introduction of the Vespula, I couldn’t help make the connection to the eXact mat with the included wrist rest and dual sided design. We have finally gotten our hands on one, the Transformers 3 Licensed version to be exact. Let’s see how it compares to its much older brother.

Whether you prefer to gun down your enemies with the increased glide of the SPEED surface or with ultimate precision from the CONTROL surface, the Razer Vespula offers the right surface that suits your playing style.

The Razer Vespula’s dual surfaces have been developed for enhanced tracking by the same scientists at Razer that have invented the most precise gaming mice in the world today. Professional gamers have also put the Razer Vespula through thousands of hours of intense gameplay to validate the tracking surfaces for tournament play.

The soft gel-filled wrist rest protects your wrist from injury and fatigue, allowing you to enjoy longer gaming sessions like never before.

Unlike almost every other Razer product we have ever seen before the packaging for the Transformers 3 Vespula does not have a black color. The front of the packaging is very colorful with all of the Transformer stuff going on. They do give you a glimpse at the mouse pad itself on the right side with a window. On the window is the only place where you can find the Razer logo outside of the logo built into the pad itself. Around back you have a space background with an image of the pad and wrist rest. Along with that image you have a few of the main features explained and pointed at. They also have a few images showing off the dual sided finishes and the extra grippy texture on the bottom of the wrist rest. 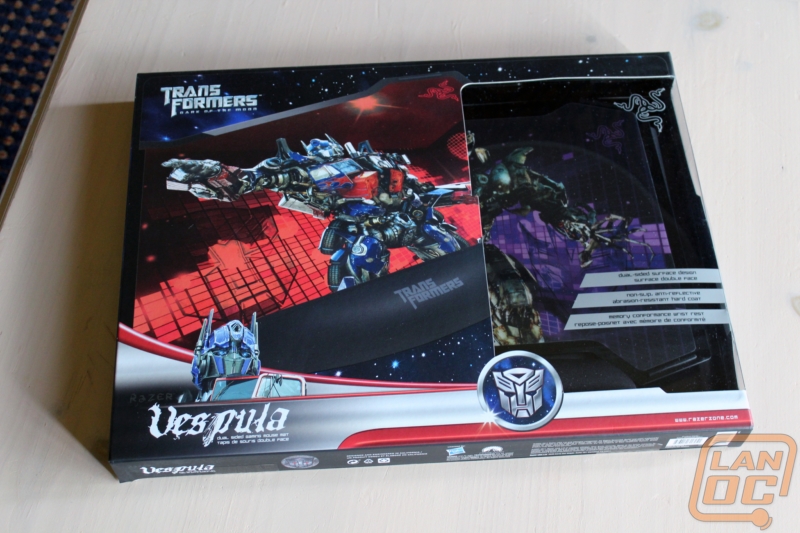 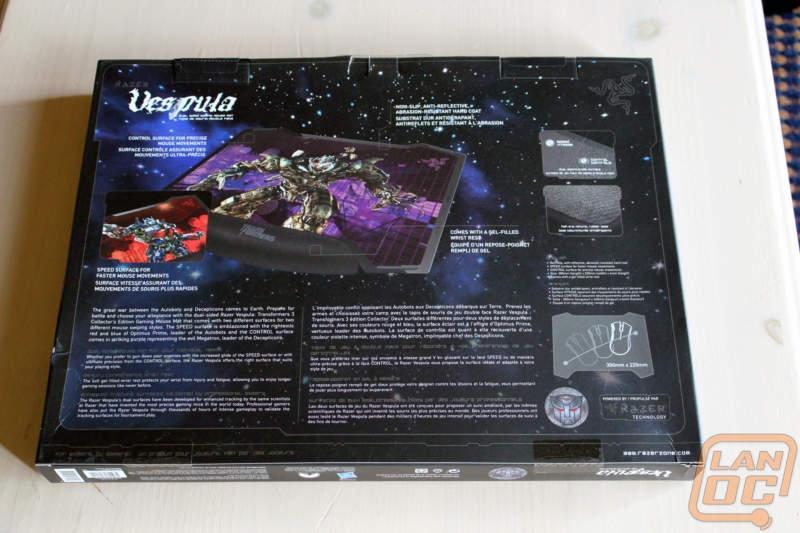 Inside you can still find the standard Razer Certificate of Authenticity tucked away in the front. Along with it you also get a pair of Razer stickers. 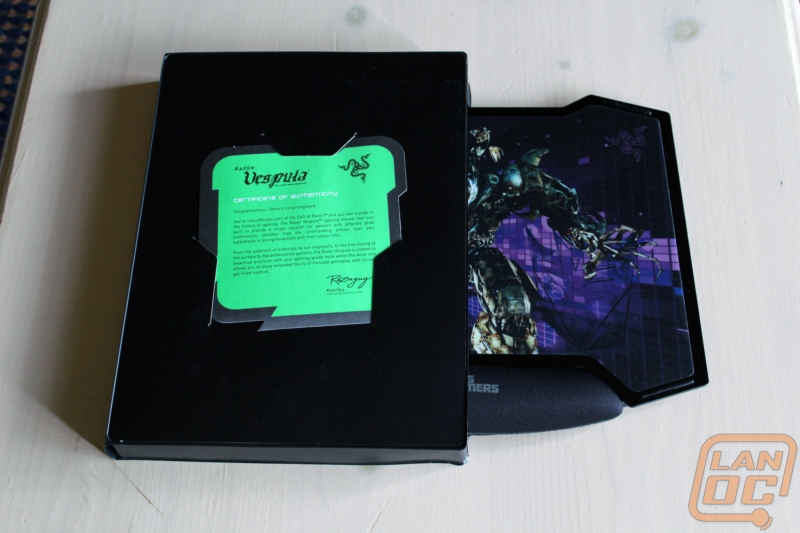 When you break it down the Transformer 3 Vespula is really just a standard Vespula with Transformers designs on each side and on the wrist rest. You have a good and evil theme going for each of the two sides. The Autobot side is bright red with Optimus Prime on it and is the “speed” side. The speed side is very smooth, much more than we are used to seeing on mouse pads. The Decepticon side of the pad has a purple theme with Megatron on it. This is the “control” side and has a much more noticeable texture than the speed side. 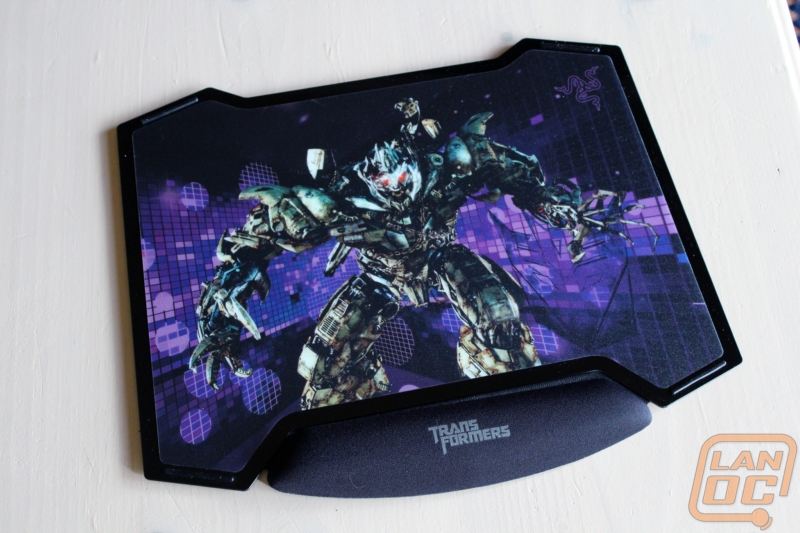 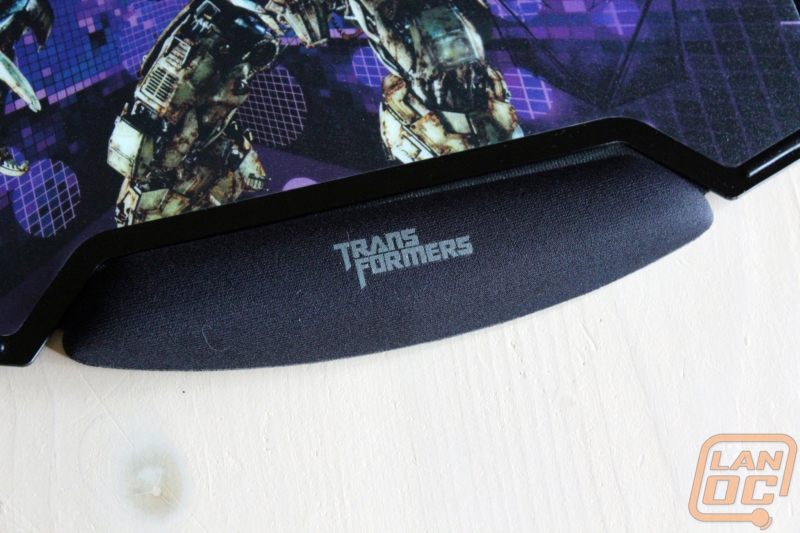 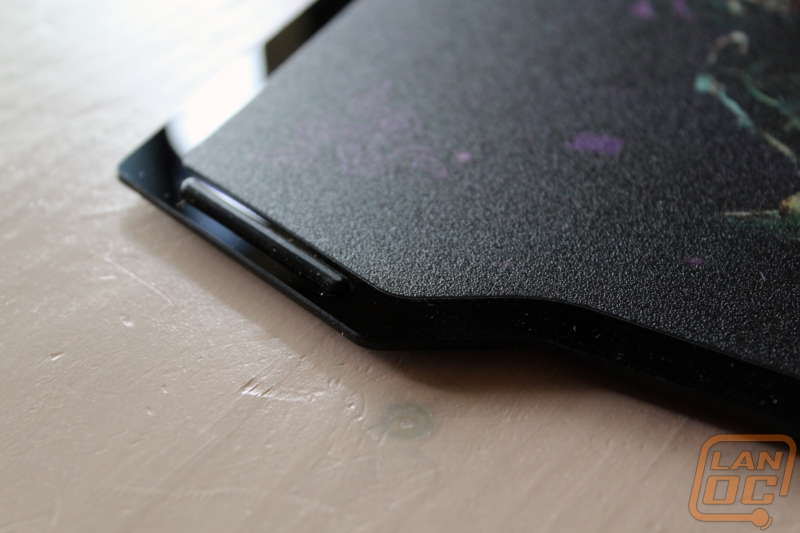 The Vespula is manufactures out of a black plastic with each of the respective sides attached by adhesive. To hold the pad up over the included wrist rest there are rubber bumpers on each corner. This is similar to the eXact mat other than the plastic construction. Although in all of our testing we didn’t have any problems with this. I still question if this will be able to hold up like the metal eXact mat, but only time will tell on that one. 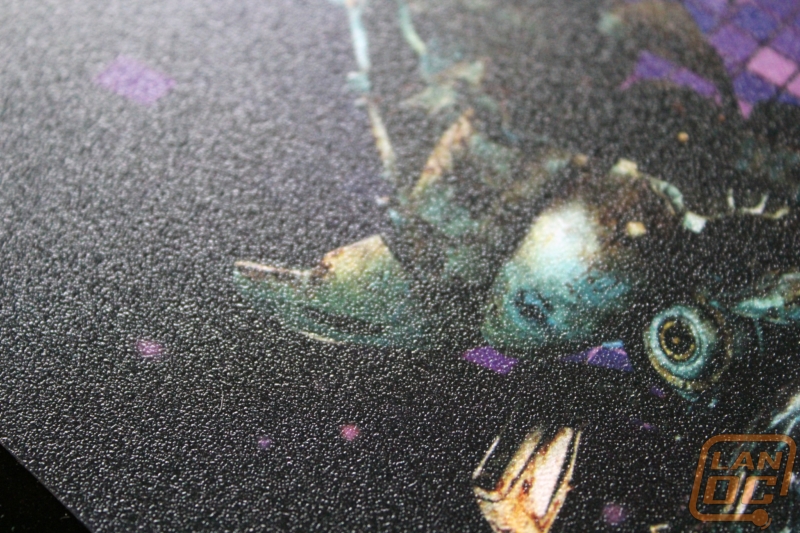 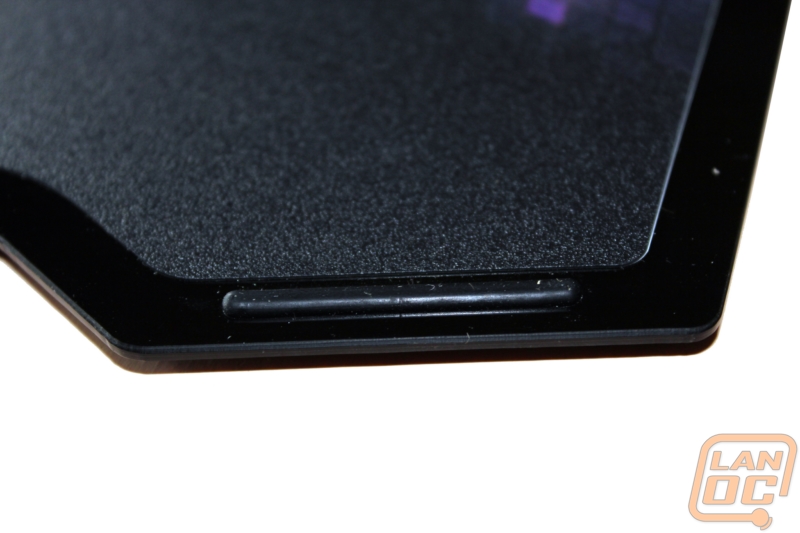 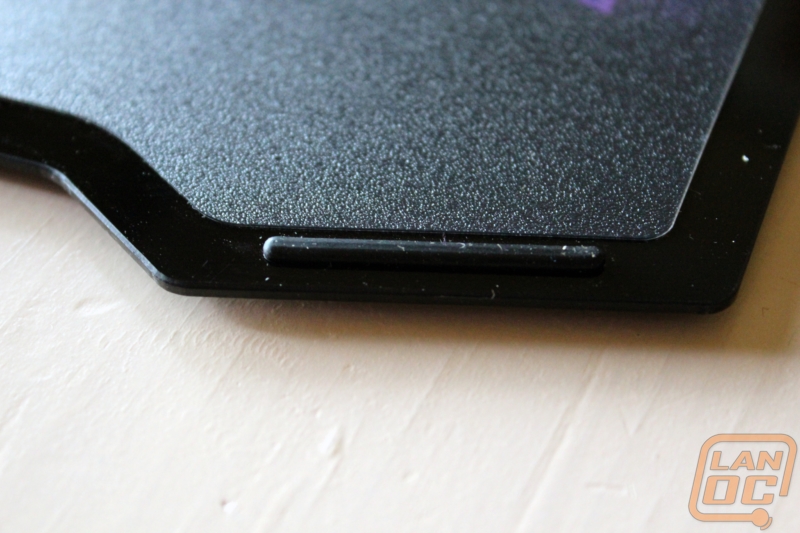 The included wrist rest is exactly like the rest provided with the eXact mat. You have memory gel that holds your arm up high enough to prevent any lines from your desk while giving you a good pivot point. It didn’t take long for me to adjust to this extra padding. It was comfortable even through long gaming sessions. 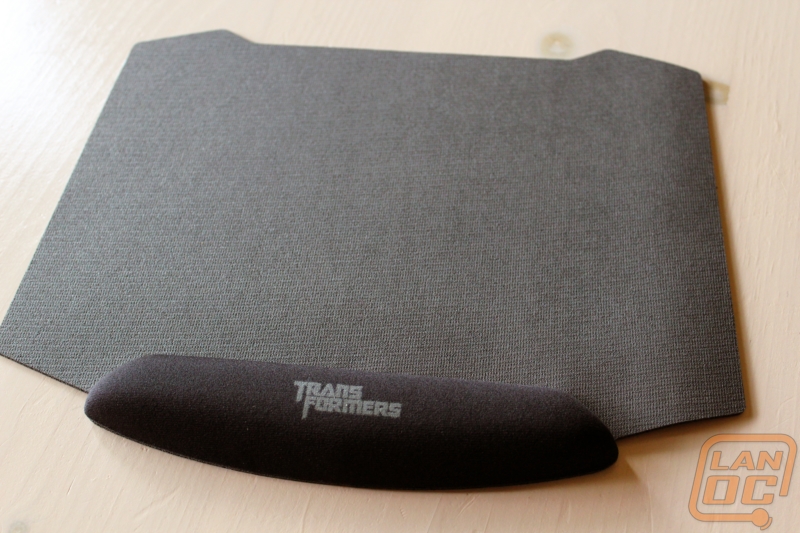 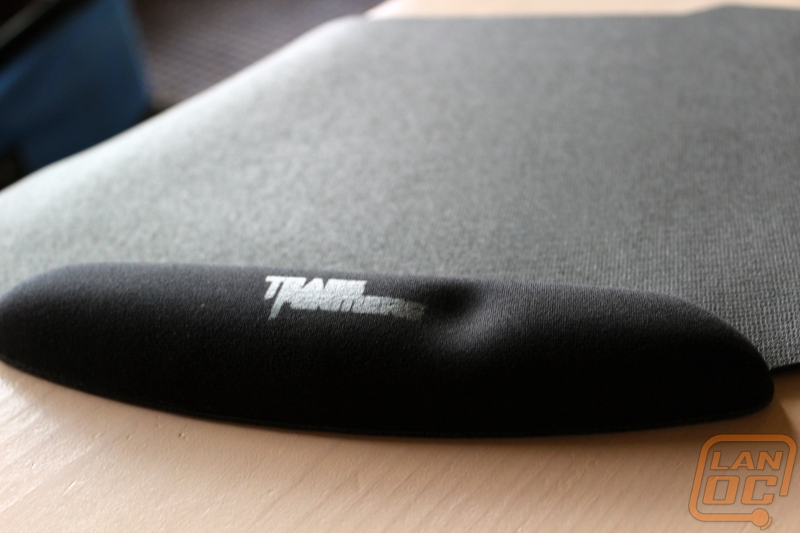 The double sided surfaces of the Vespula works out well if you don’t know what kind of surface you prefer. In my testing I found the control side to be a lot more useful but my wife prefers the speed side of things. 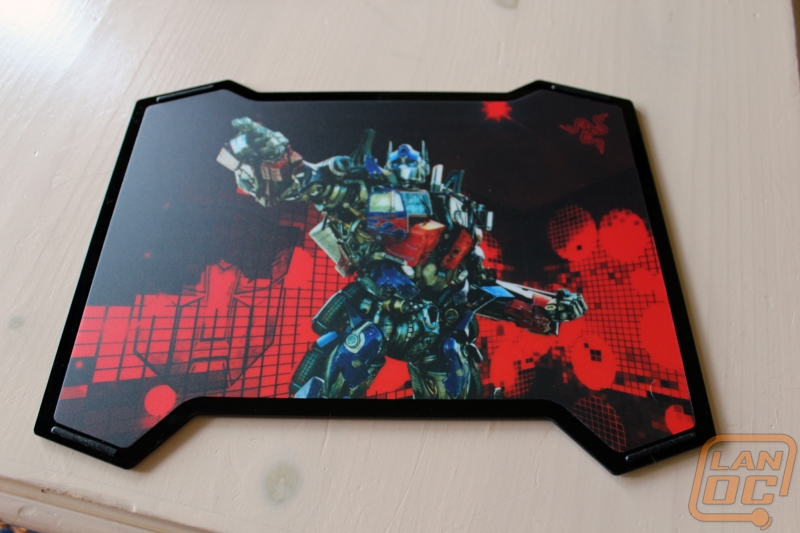 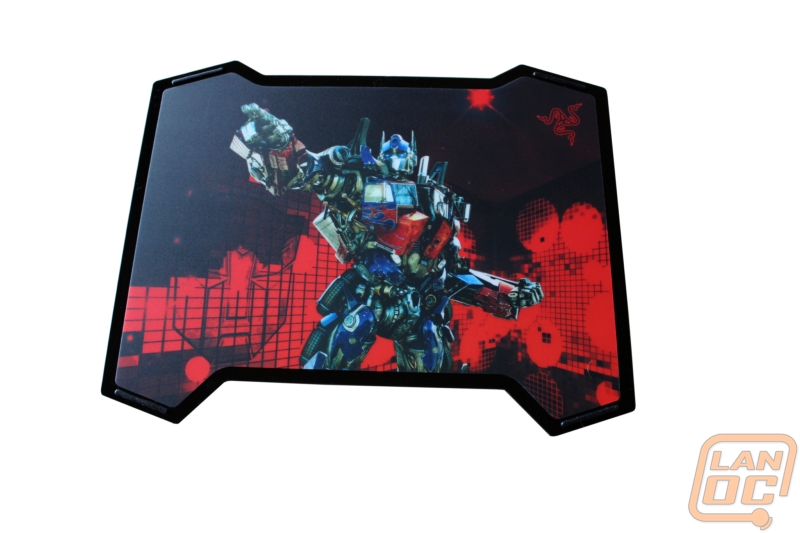 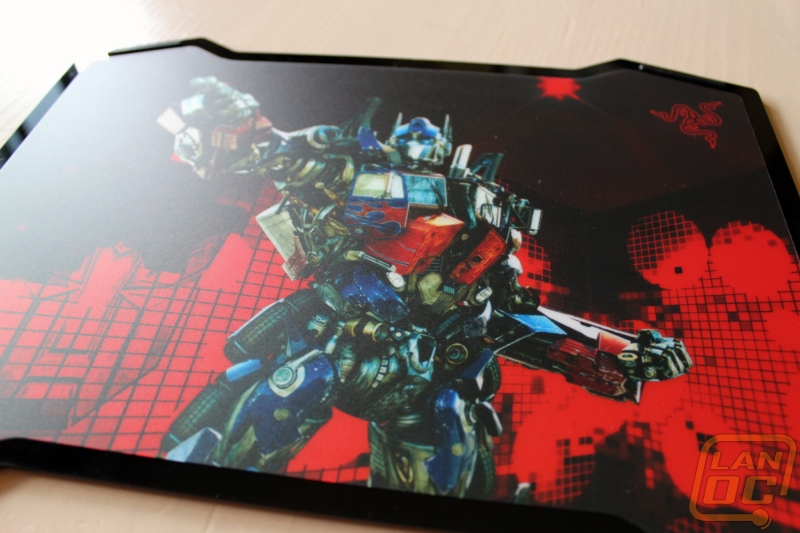 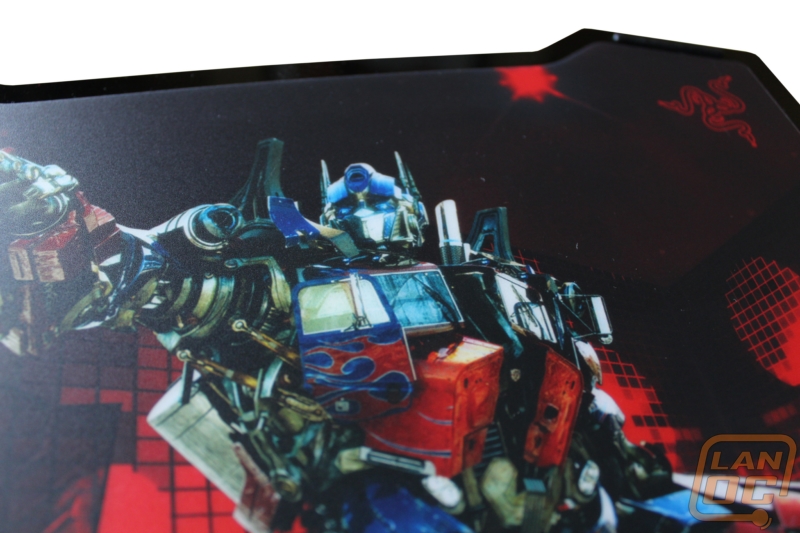 So at the end of the day where does that leave us? We have a hard mousepad with two sides giving you both speed and control. It may not be made of metal like the eXact mat that its clearly based on. But it’s still great to see the idea of the eXact mat live on in the Vespula. Even better for Transformers fans like me, they have the Transformer 3 edition with each side themed out in Autobot and Decepticon. My only complaint about the pad is the use of plastic and we won’t know for a long time if that even makes any difference from the metal eXact mat.  Both the original and Transformers editions sell for less than $35. At that price the Vespula isn’t a bad price for a double sided pad and a wrist rest. Of course you are paying for the Razer name and the Transformers name, but that is expected. 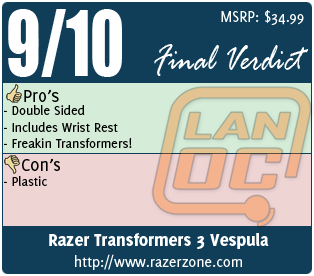 You might call him obsessed or just a hardcore geek. Wes's obsession with gaming hardware and gadgets isn't anything new, he could be found taking things apart even as a child. When not poking around in PC's he can be found playing League of Legends, Awesomenauts, or Civilization 5 or watching a wide variety of TV shows and Movies. A car guy at heart, the same things that draw him into tweaking cars apply when building good looking fast computers. If you are interested in writing for Wes here at LanOC you can reach out to him directly using our contact form.
Discuss this article
Log in to comment
Posts in discussion: Razer Transformers 3 Vespula