Some of you may remember my review of the DAS keyboard over a year ago. For almost 20 months we have had the keyboard in the office. For that same amount of time we have seen what a clicky keyboard can do to your coworker’s sanity when used regularly. Because of that I was ecstatic when DAS said they would send over their Silent model. But I was a little concerned that going silent would take away some of the features we loved the most about the DAS keyboard. We are going to put the DAS Model S Pro Silent through its paces, and while we are at it we may put the two keyboards head to head on video to compare their noise levels. 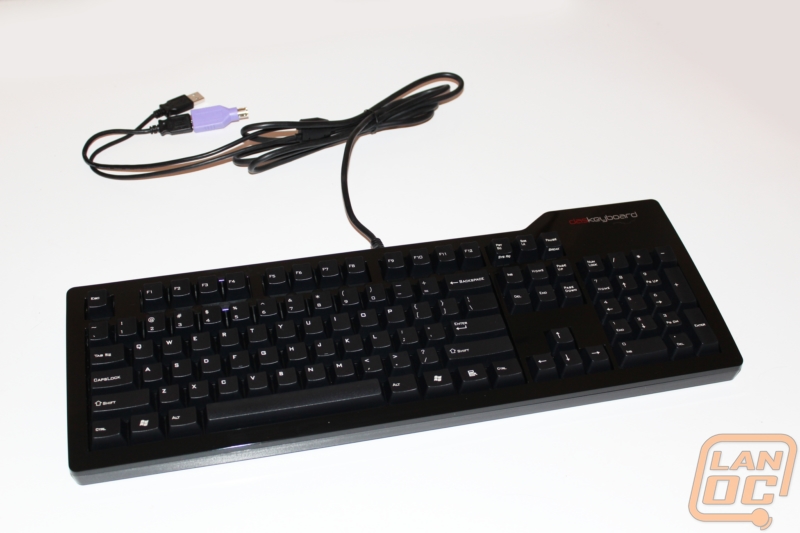 If you look back to our past Das Keyboard reviews you can see that Model S Pre Silent’s packaging is exactly the same as the others with one small change. The Silent variation has a bronze bar along the left side. I don’t know if this is just a styling change or if this is how they differentiate the silent from their “clicky” models. Either way the packaging has a nice overhead shot of the keyboard on the cover that gives you an idea of what’s inside. Around back there are a few details about the built in USB 2.0 hub, cable, and requirements. 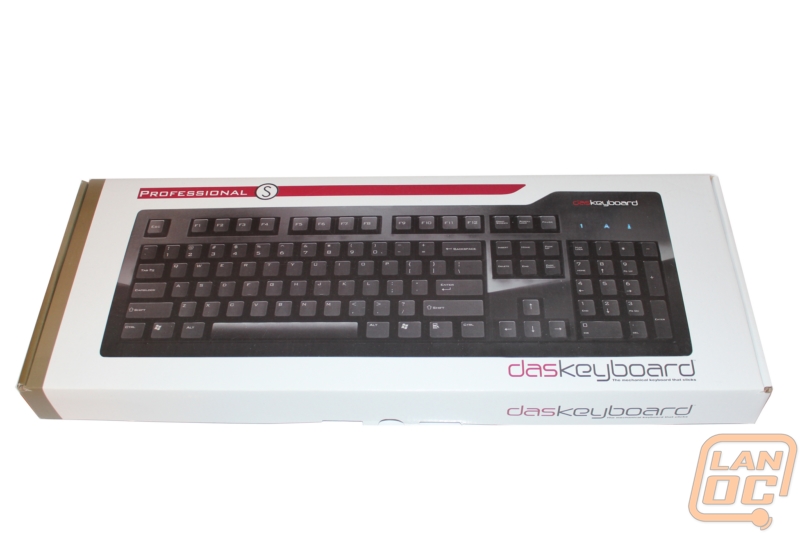 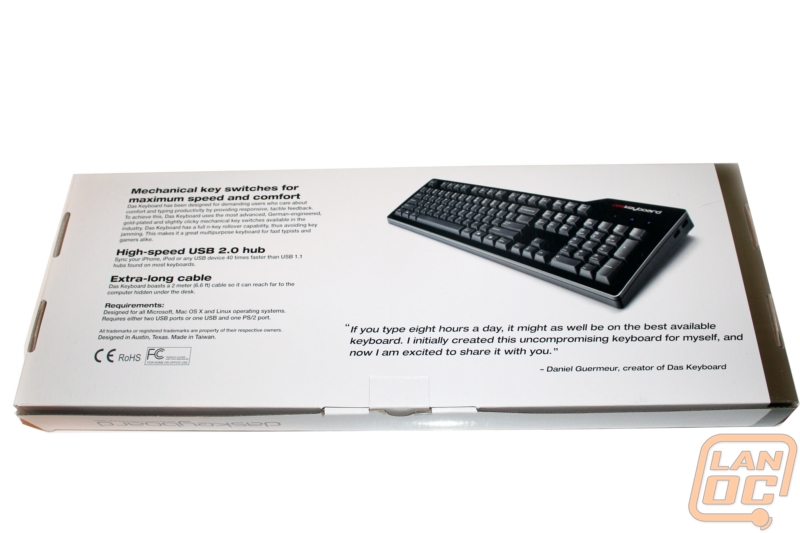 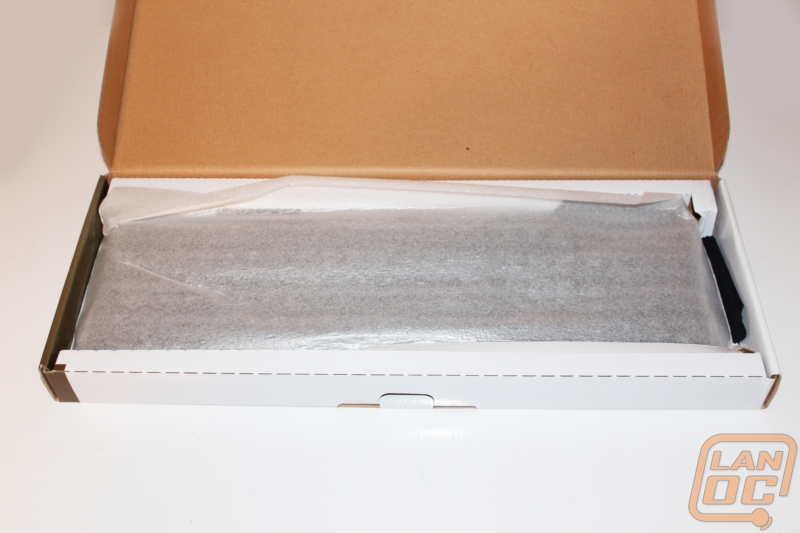 Inside the keyboard is wrapped up in a foam bag to prevent any damage while its making the trip from the factory to your hands. Along with your keyboard you have a small installation guide and a small microfiber cloth for keeping your Das Keyboard free of fingerprints. On top of the foam bag the keyboard also is shipped with a clear plastic film wrapped over the keys, a little extra protection for the most important part of the keyboard. 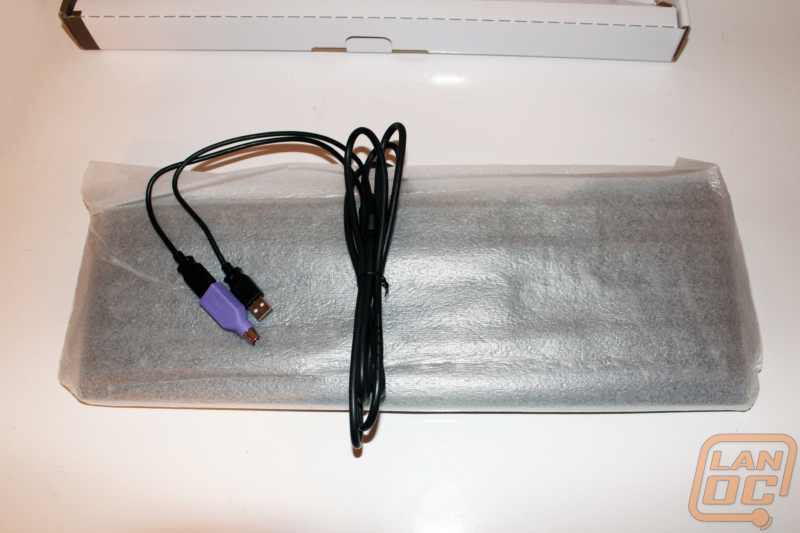 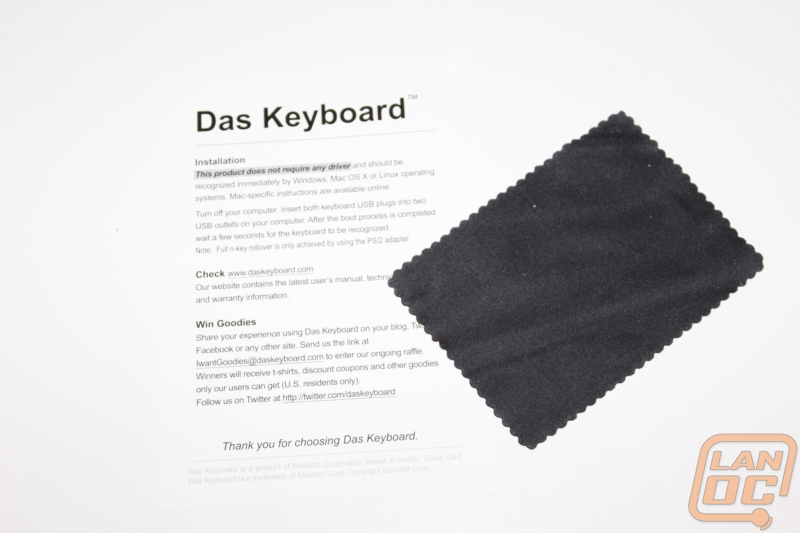 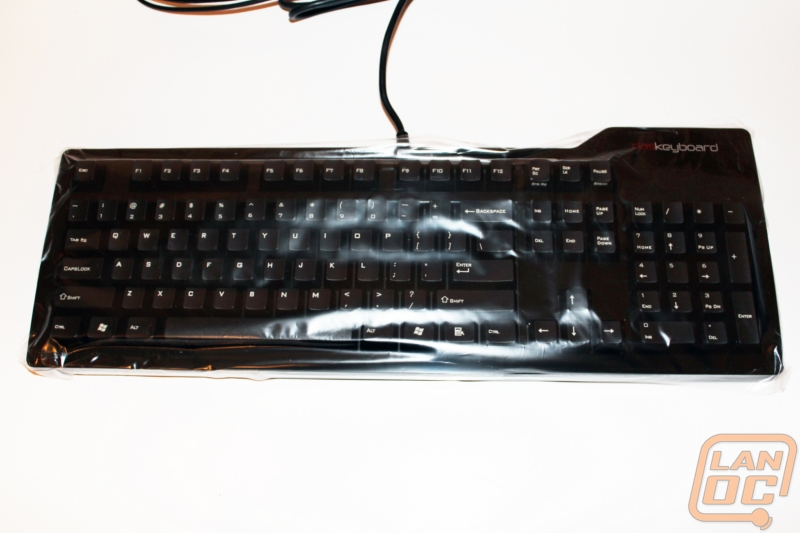 The original Das Keyboard had the standard Model M design but the Model S is a little different. The new design is a little more stylish than the original. The entire keyboard is made out of a dust and finger print collecting glossy finish. The key layout is a traditional one with a single height enter key, similar to the Model M. Unlike the Model M the Das Keyboard includes the windows key though. 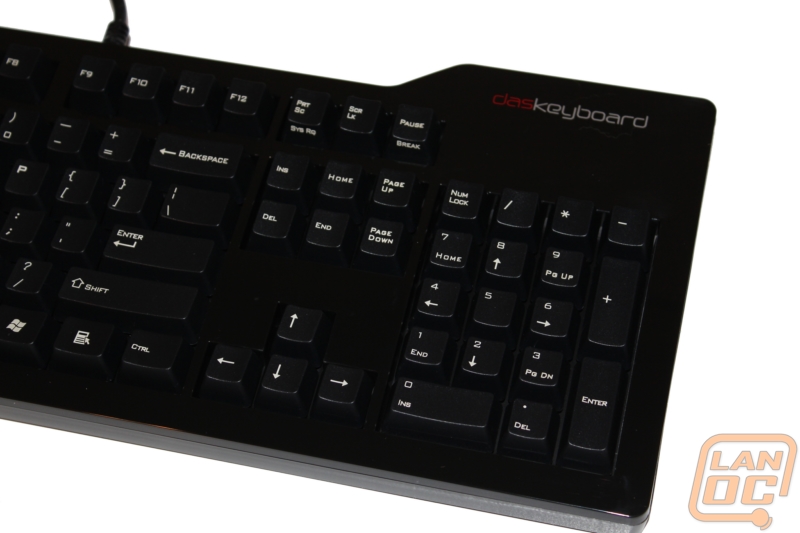 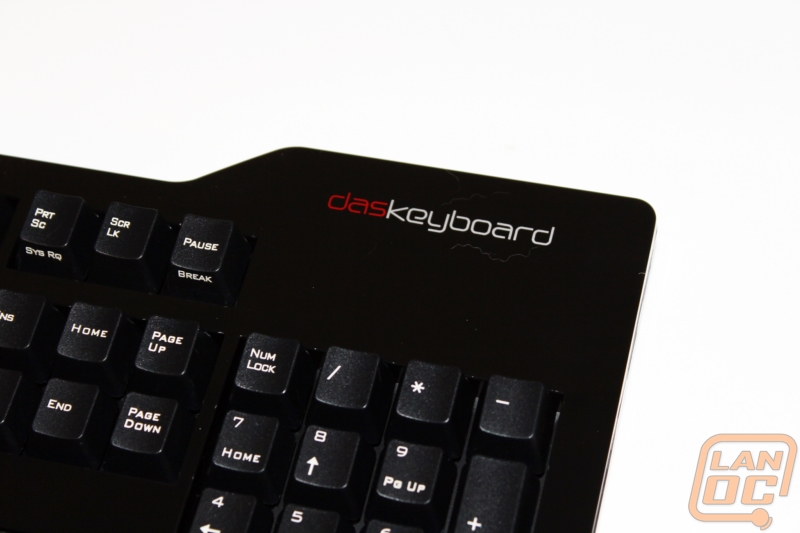 When comparing the Model S Professional Silent to the Model S Professional that we covered before there are a few differences other than the obvious difference in mechanical switch used. The non-silent version includes media keys and a function key in place of the left side windows key. The silent version is lacking the function key along with the media keys. After doing a little research I found that the media key version is no longer available at all. As a gamer this is a little disappointing because having the function key in place of the windows key prevented us from bumping the windows key mid game. 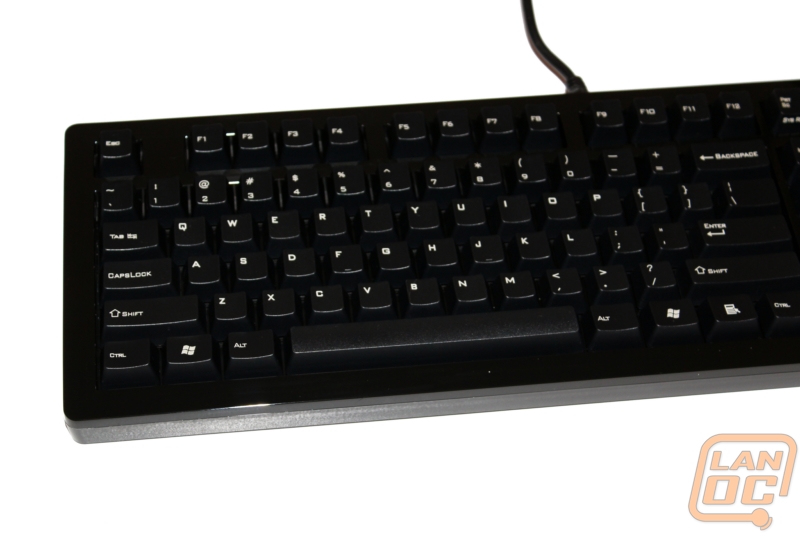 On the bottom of the keyboard you have four inch and a half long rubber strips to keep the board from moving while typing. To angle the keyboard up, you have two flip down flaps on the back corners to raise the back up just over a half inch. Oddly enough, when using the flip out feet you only have two rubber legs on the table; the feet don’t have a rubber grip. We will find out if that affects performance in our testing later though. 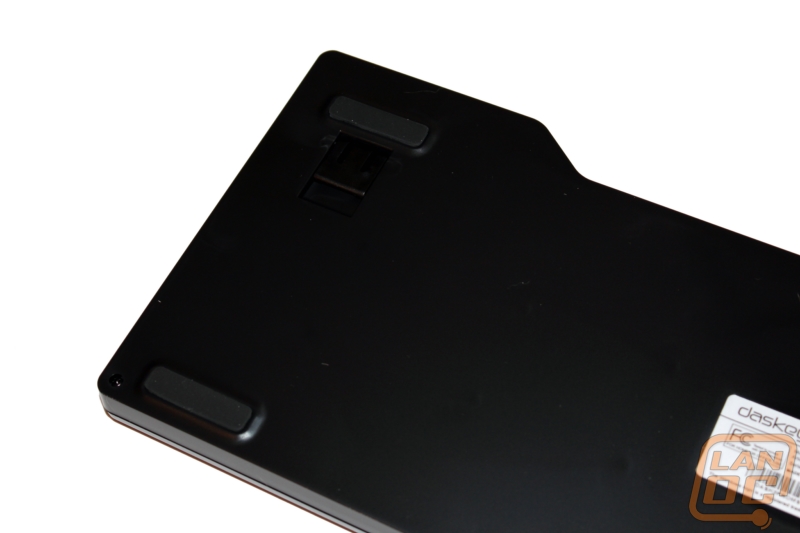 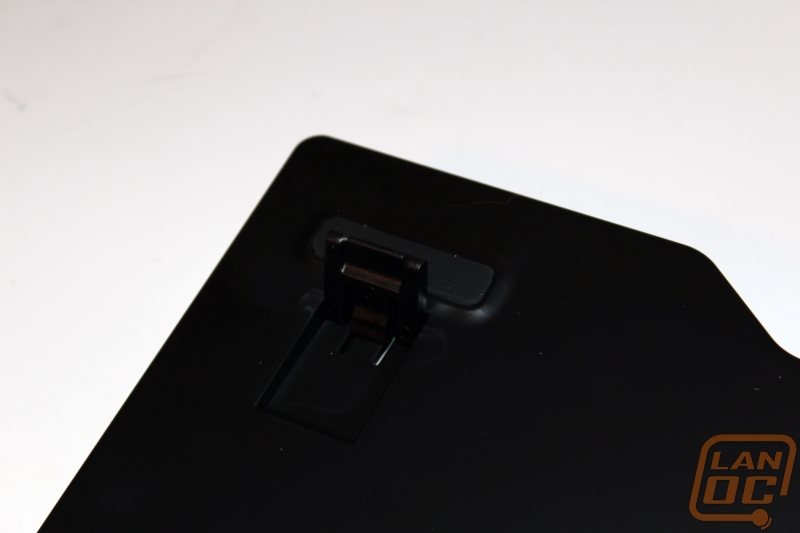 Popping one of the keycaps you can see what’s behind the difference between the normal and silent versions. The normal uses a Cherry MX Blue Mechanical switch while the Silent comes with Cherry MX Brown Mechanical switches. Both switches look very similar from the outside other than the different colors used on them. Where they stand out is internally. A Cherry MX Blue switch uses what they call a “Mexican Jumping Bean” mechanism to give it that distinctive click. You can see a good example of how it works at the following link. The Cherry Browns have a standard mechanism without anything to add an additional click. Because of that they were used in the Das Silent. 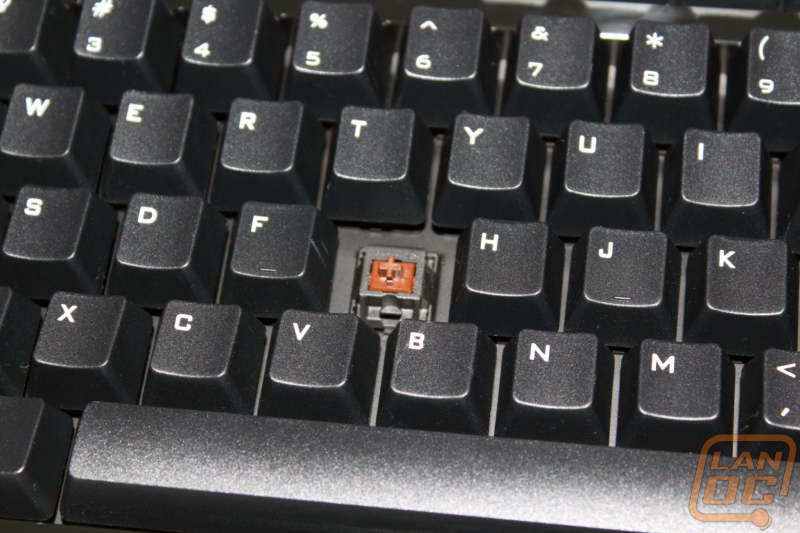 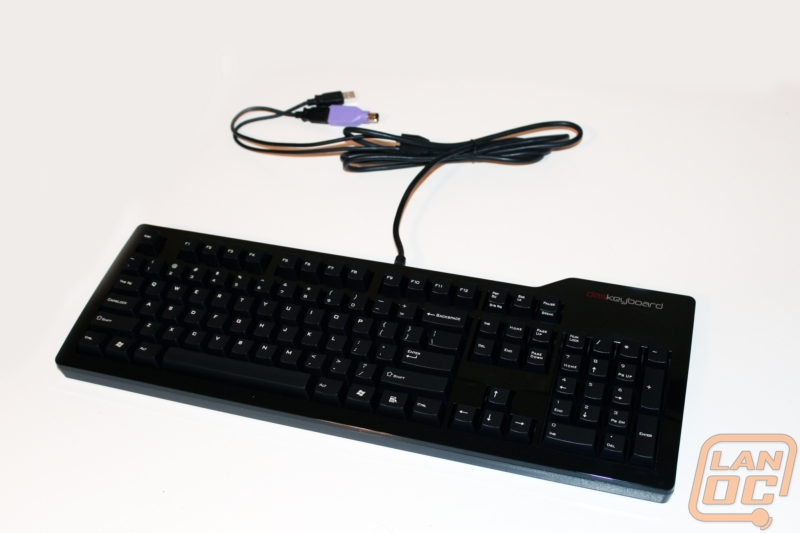 Like our last Das review I put the keyboard through both Office and gaming testing including typing out this review. Using the Das Silent from day to day I quickly adjusted to the new keyswitch and lack of clicking sound. When gaming I found the Das Silent to be quick, responsive, and reliable. When using the included PS/2 adapter you have full N key rollover, perfect for those heated firefights. When typing I found myself missing the standard Das slightly. Although It could easily be in my head, the Cherry Browns are slightly harder to push making the original keys feel “lighter” when typing. The Das Silent still felt less difficult to push than the Steel Series Sgv2 that we recently reviewed. 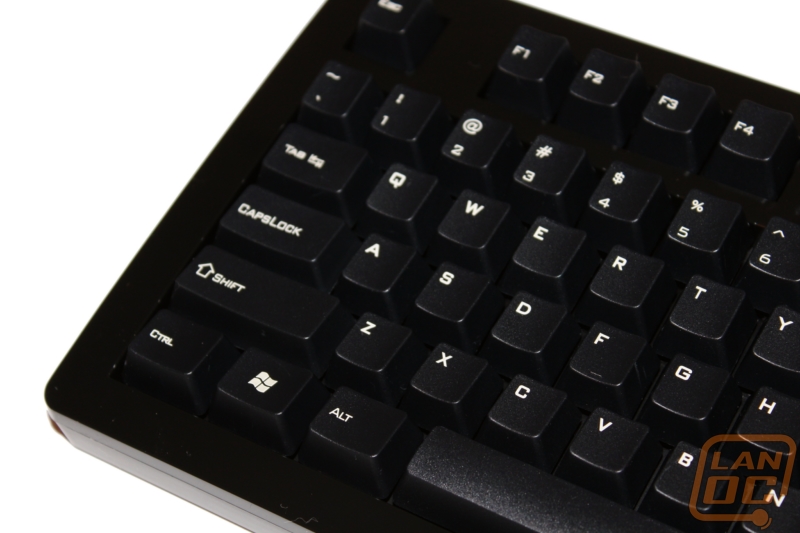 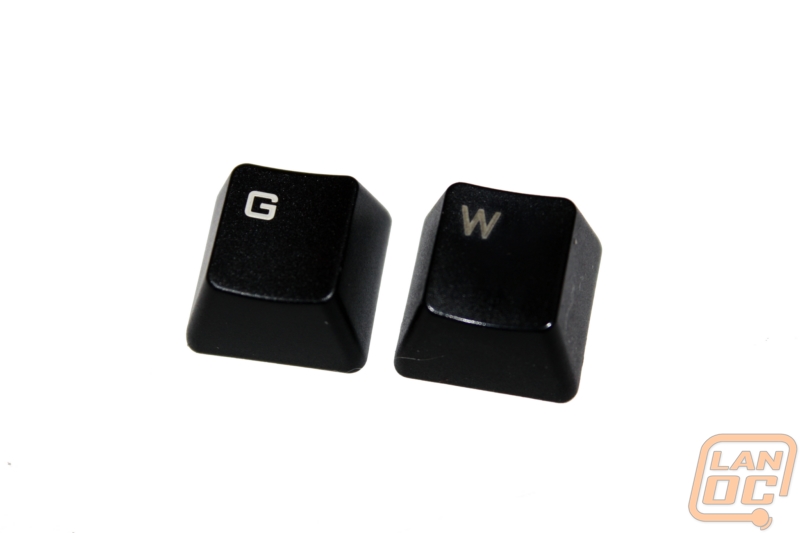 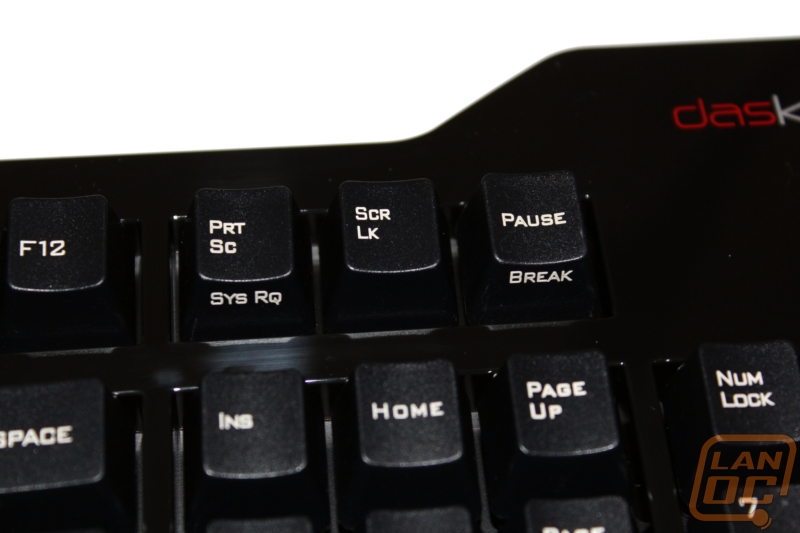 I love that the include the two USB ports on the side of all of the Das Keyboards. I have found this to be a perfect place to plug in my mouse and USB drives when needed without having to climb under my desk to having to mess with cables running all over my desk. 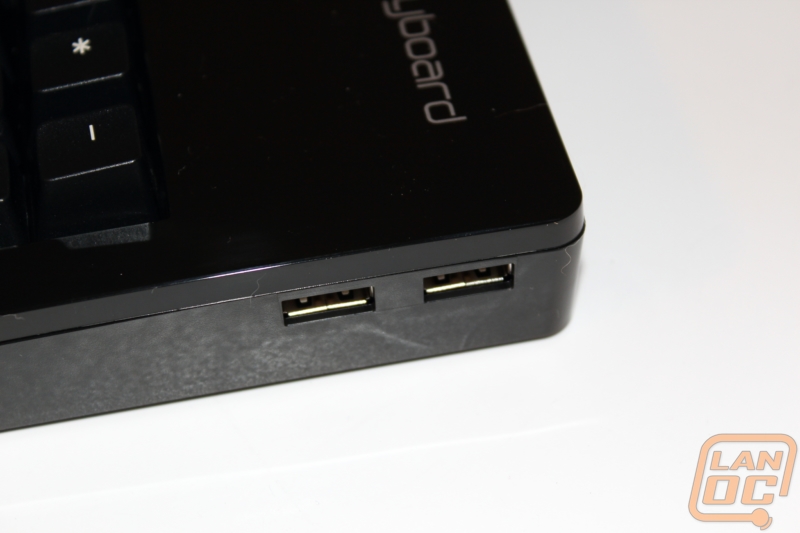 Keyboard ghosting isn't an issue when you are using the DAS's PS/2 port adapter. When using the USB you are limited to 6 keys at once. 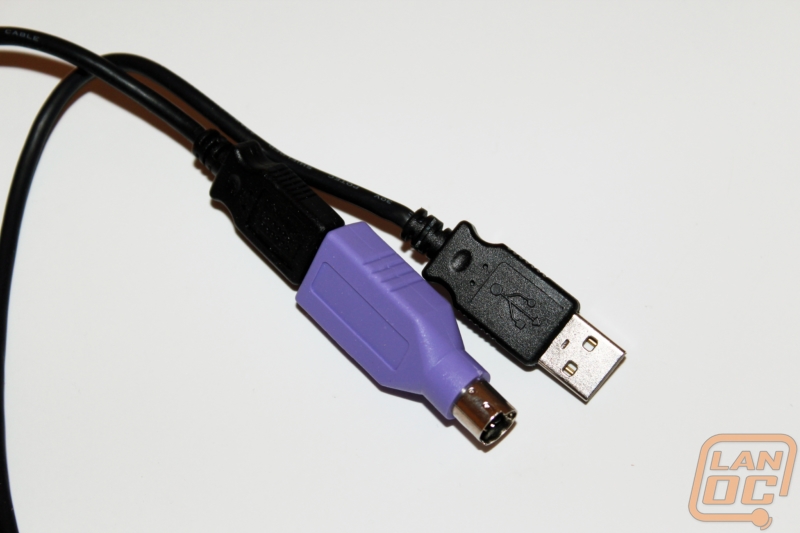 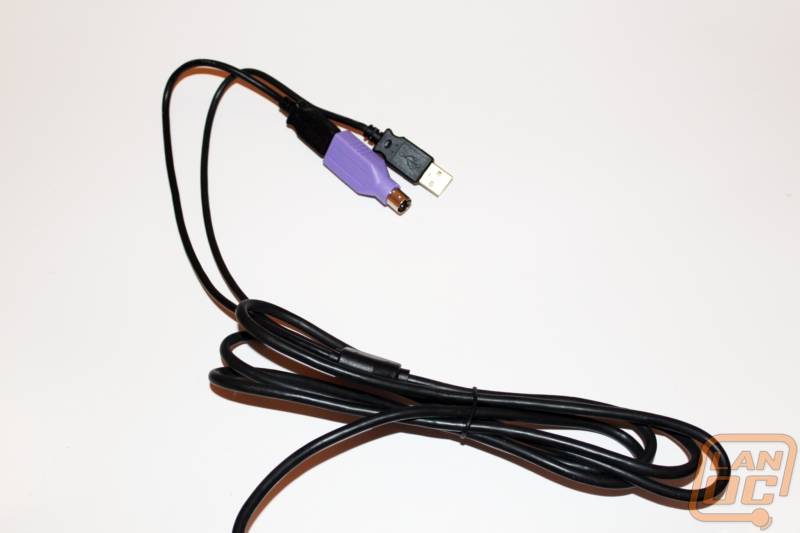 Having used our standard Das keyboard for the last 20 months I knew what to expect with the Silent variation for the most part. Going from a clicky keyboard to something quieter will be a major improvement for those around me. The clicky Cherry Blue switches are amazing to type on and easy to ignore when you are the person typing but they can be very disruptive for everyone else. This is where the Das Silent comes in. While still having all of the good features of the Das Keyboard they have brought out a model that is less likely to have you hunted down and hanged in your office. That’s not to say that the Silent is really silent, as you could see from our video it still comes in with more noise than a membrane backed keyboard like the G19. But this is just about as good as you can get while still sticking with a mechanical keyboard. 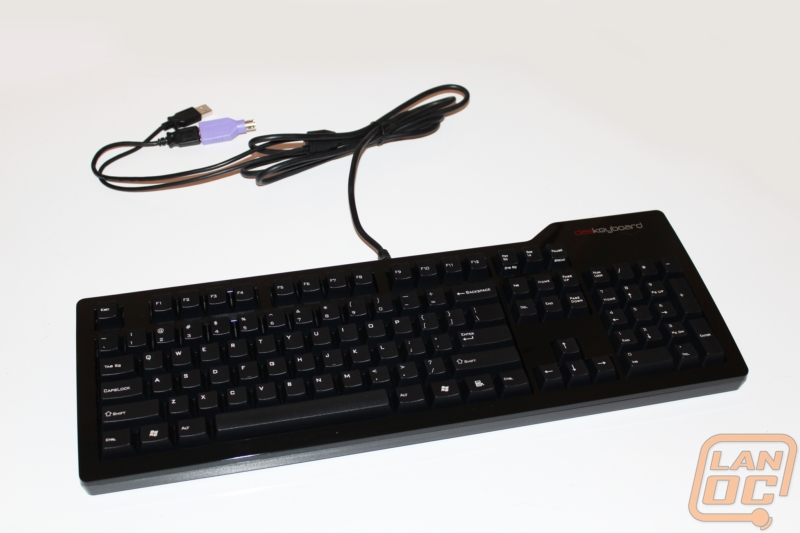 Das includes a two port USB hub that we take advantage of when plugging in our mouse and other USB devices up on the desk. My only complaint is the missing media keys. Our last Das keyboard had media keys and replaced the left windows button with a function key. As a gamer it was a major plus to not have to worry about the windows key being bumped when you go to crouch in game. All in all, I think Das Keyboards has done a good job quieting down their keyboard without taking away what made their keyboards so amazing. If it’s still not good enough for you, you will have to pick up a few pair of their earplugs. 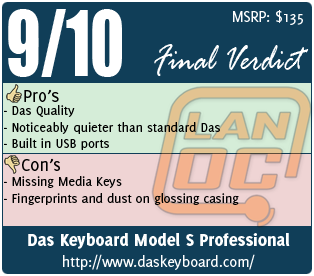 You might call him obsessed or just a hardcore geek. Wes's obsession with gaming hardware and gadgets isn't anything new, he could be found taking things apart even as a child. When not poking around in PC's he can be found playing League of Legends, Awesomenauts, or Civilization 5 or watching a wide variety of TV shows and Movies. A car guy at heart, the same things that draw him into tweaking cars apply when building good looking fast computers. If you are interested in writing for Wes here at LanOC you can reach out to him directly using our contact form.
Discuss this article
Log in to comment
Posts in discussion: Das Keyboard Model S Professional Silent

We have 1133 guests and one member online